Navy feels more of a natural choice for Bond. 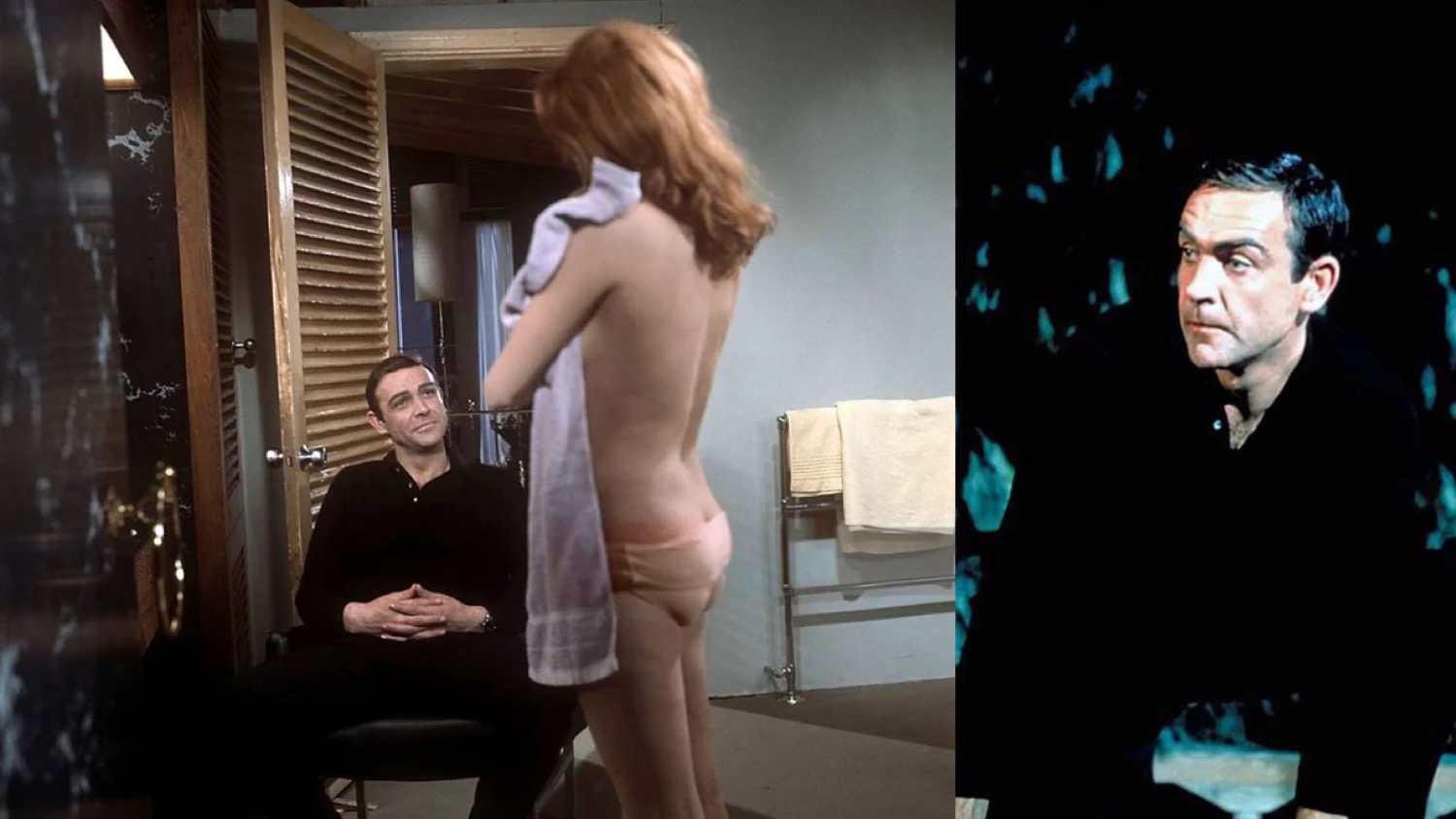 For relaxation and infiltration

This inspired 007 piece from Orlebar Brown is based on the long black sleeve polo on Sean Connery’s James Bond in Thunderball. There are two occasions where Bond is seen in this polo. The first time is in Shrublands when Bond notices something going on outside, he goes to investigate and dresses in this polo and light brown cavalry twill trousers.

The second time is when Bond goes to find Paula in Largo’s house in the Bahamas, Palmyra. This time he wears all black outfit, pairing the polo with black trousers and black leather ankle boots.

Looking at the articles written by Matt Spaiser co-author of From Tailors With Love, An Evolution Through Menswear in the Bond Films, the original polo is a black cashmere, with white three-button opening at the neck and ribbed cuffs and hem. 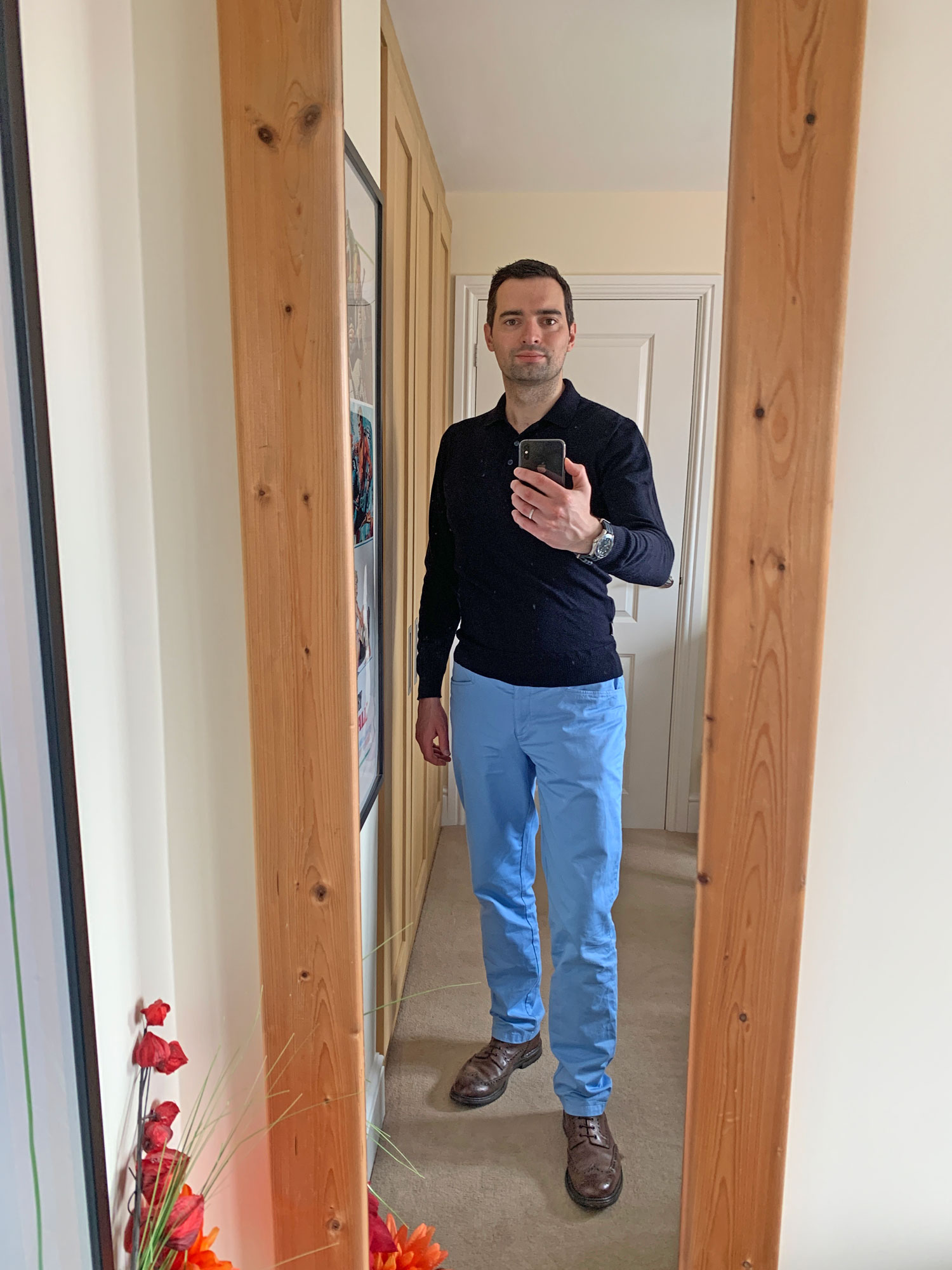 As part of Orlebar Brown’s 2nd phase of what they now call the ‘007 Heritage Collection’ the Thunderball Long Sleeve polo was high up on the want list, just under the Thunderball Shirts, of which they released the Pink ‘Pinda’ shirt during this release.

The inspired version is navy instead of being black, is made with Italian merino wool rather than cashmere, and has navy imitation mother of pearl buttons rather than white (assuming real) mother of pearl buttons. There is chevron racked-rib detailing to the cuffs and hem, the customary red stitching on each of the sides that OB put on the majority of their garments, 007 labels on the left side of the polo, and inside collar.

Could you gift wrap that for me please?

This was the second item I got as part of this capsule, and to be honest I wasn’t sure which size to go with. In t-shirts and polos, I usually go with a small, but with shirts I go with a medium (I’m 6ft and have a 40–41-inch chest). I’d heard some mixed reviews regarding the sizing, initially looking at the size spec and experience I would have gone with a small. What I ended up doing was buying both a Small and a Medium.

What I like about Orlebar Brown (at least the last time I bought something from them) is that they send everything so neatly packaged, wrapped up in tissue, but also in a resealable box which is easy to send back with anything you don’t want. So, I felt comfortable ordering both sizes knowing that I’d send one back. 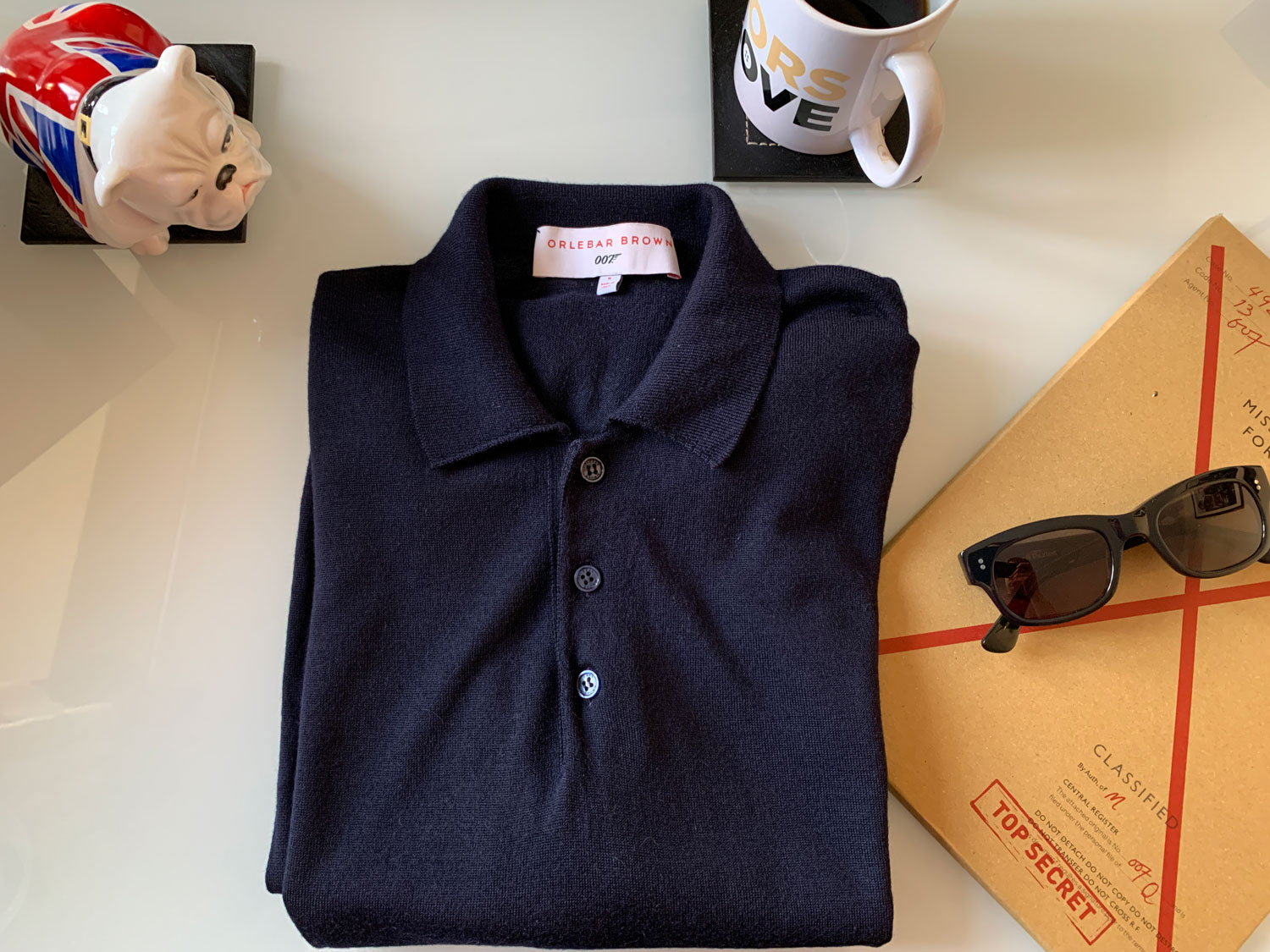 When I received the polos, I went straight for the small, what I thought would be my size. I put it on, and felt although I could get it on, it was just slightly too tight. Thinking on the environment I’d be wearing it, and I didn’t want it too tight as it would be uncomfortable in the heat.

I was worried that the Medium would be too big, or unflattering. I was wrong! The medium isn’t as fitted but looks good in all the right places. It looks tailored, without being overly fitted (as the small would have been) which is perfect for the summer environments. So, I kept the medium and waved goodbye to the small. 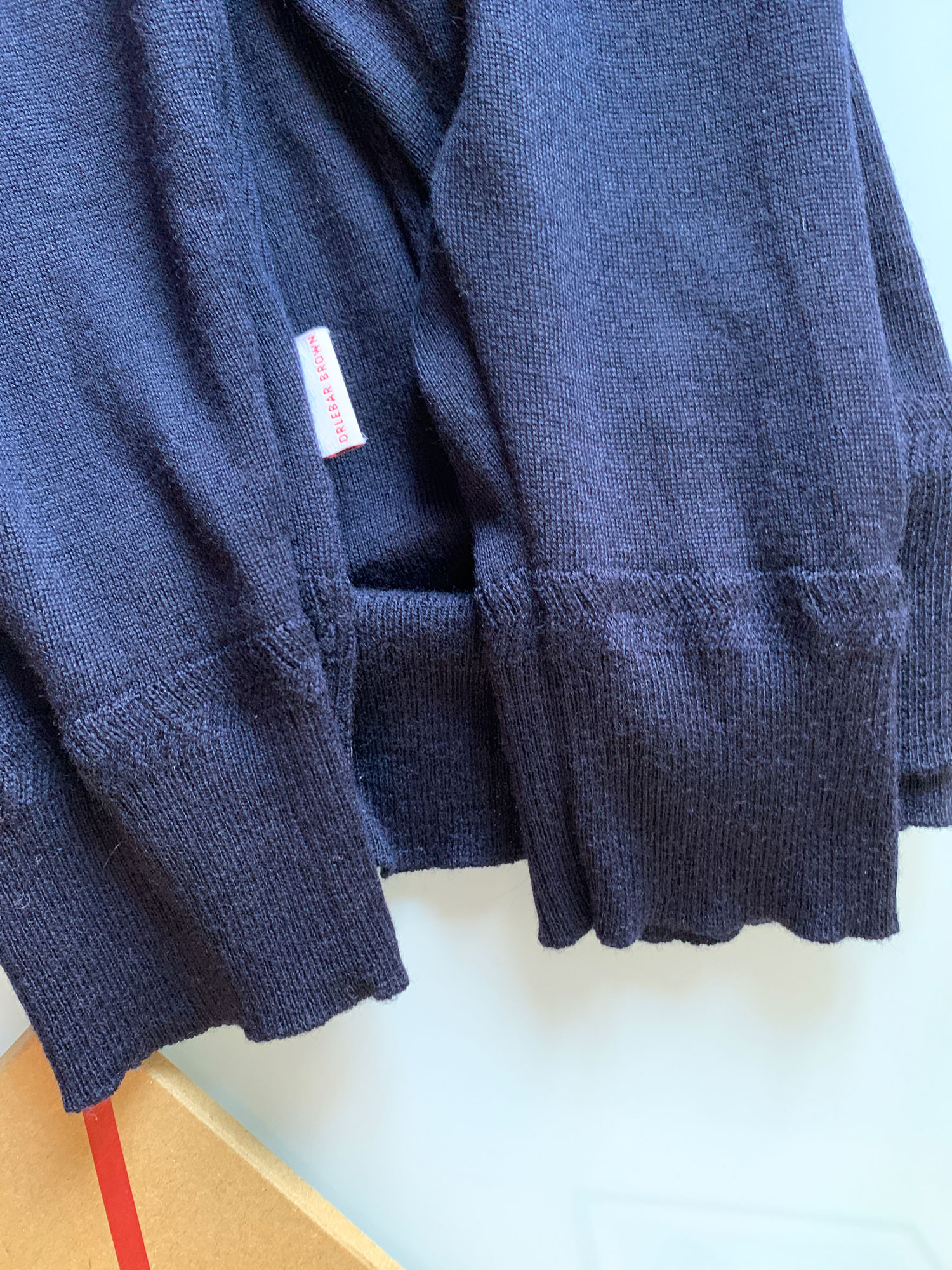 I’ve worn the polo over the last 3 years, mostly during the spring and summer months, and have had a good amount of wear from them.

The merino wool used by OB feels soft to the skin, but I do get a little itchy when hot. This doesn’t happen often though, but I don’t get the same with my John Smedley Bobby V neck jumpers, also made from merino wool. I don’t often wear the Bobby without something under it, but I do on occasion, and I don’t remember feeling itchy in them.

The other thing to consider is that the Thunderball polo is hand wash only. The Bobby can be thrown into the washing machine, which makes it easier to maintain. As a result I wear them more often. 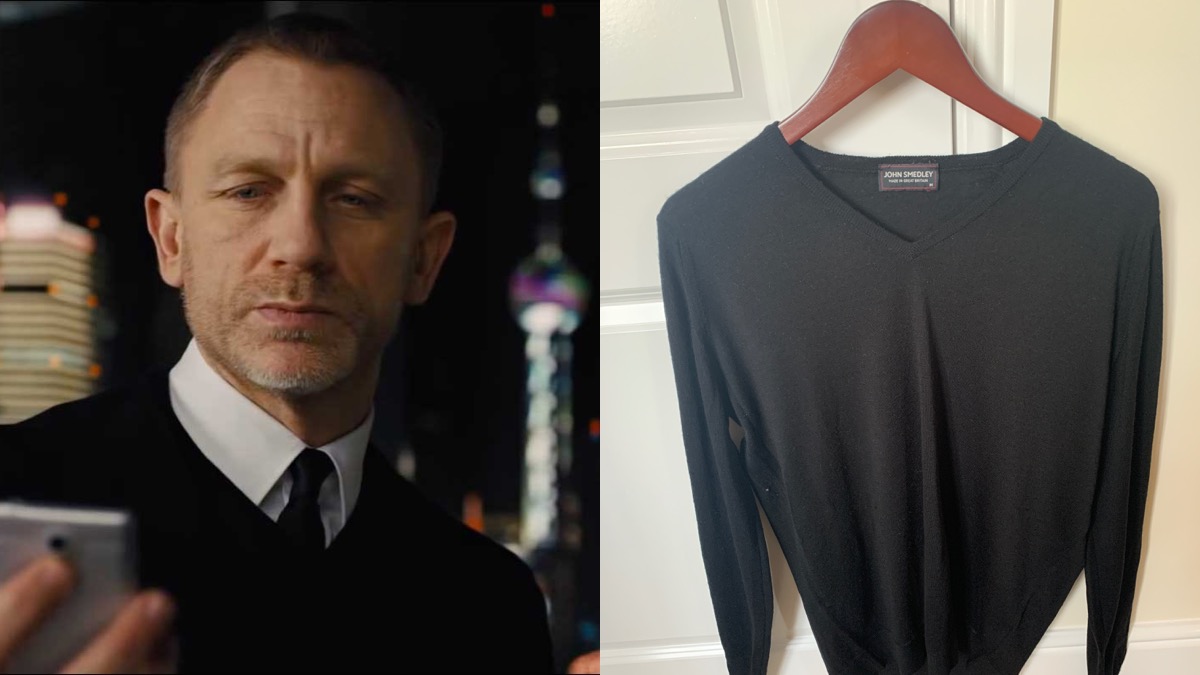 However, I do love this Long Sleeve polo, and continue to wear it. I treat this as spring weather day wear or evening time summer wear when it gets cooler. I have also worn them with t-shirts under, treating the polo like a jumper in cooler spring or autumn weather. This adds to its versatility, as a polo shirt or polo jumper. It can be dressed up with trousers for a smart casual look or dressed down with chinos. Although I can’t recall pairing this with jeans.

I like the direction OB went with the colour; I think it’s more versatile with a summer wardrobe and can match with more options than the original black polo. Having the Goldfinger N. Peal polo and jumper in black as well would have been too much. Plus, Navy feels more of a natural choice for Bond.

At the time I purchased I remember that this sold out very quick, so was lucky I ordered both sizes, as I might not have been able to exchange later. 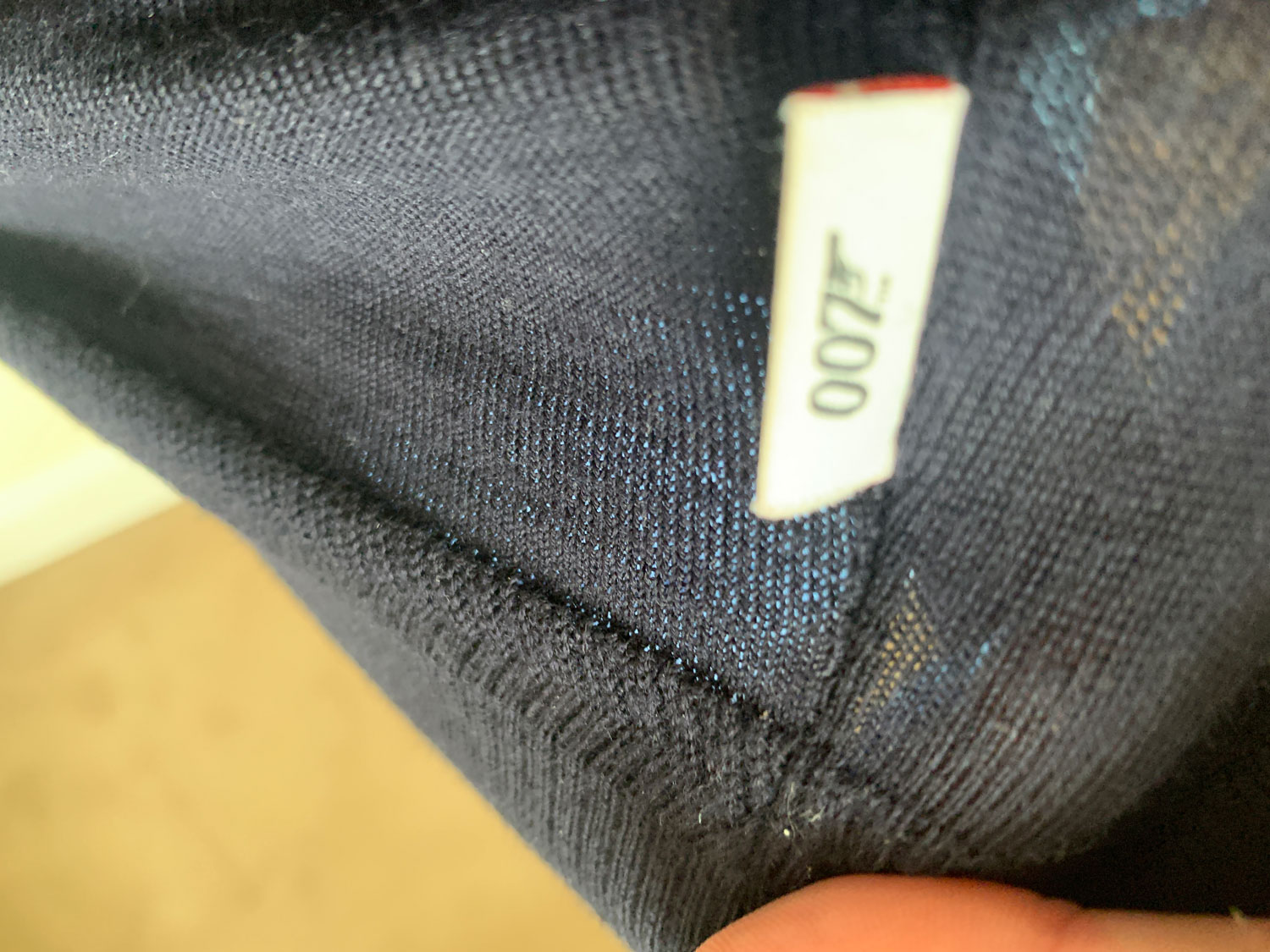 Good news for those who couldn’t get their hand on this the first time. Just prior to the release of No Time to Die, OB re-released several of their 007 Heritage range items that had previously sold out, including this polo. It is still available in some sizes at the time of writing this report. There are slight changes to the OB label with their updated logo. Otherwise it is the same as with the first release.

When starting to review this item I did notice a hole in the right arm, which I don’t remember producing. However I have sewn up the hole. I wouldn’t say that my sewing skills are great, but it’s not too noticeable. It’s possible that this was a result from a moth, as I had left it out for a while and didn’t put it away when I’d finished using it. Another reason to make sure I put things away once I’ve washed and ironed them and not leave them out.

I’ve had this item for 3 years. Apart from the small hole in the arm, the rest of it has held up well. It has a classic style and feel that lasts the test of time.

Article by Daniel Gaster. Be sure to follow Daniel on Instagram. Daniel use two articles from the Thunderballs category on Matt Spaiser’s Bond Suits website as research for this article on the Navy Long Sleeve polo.