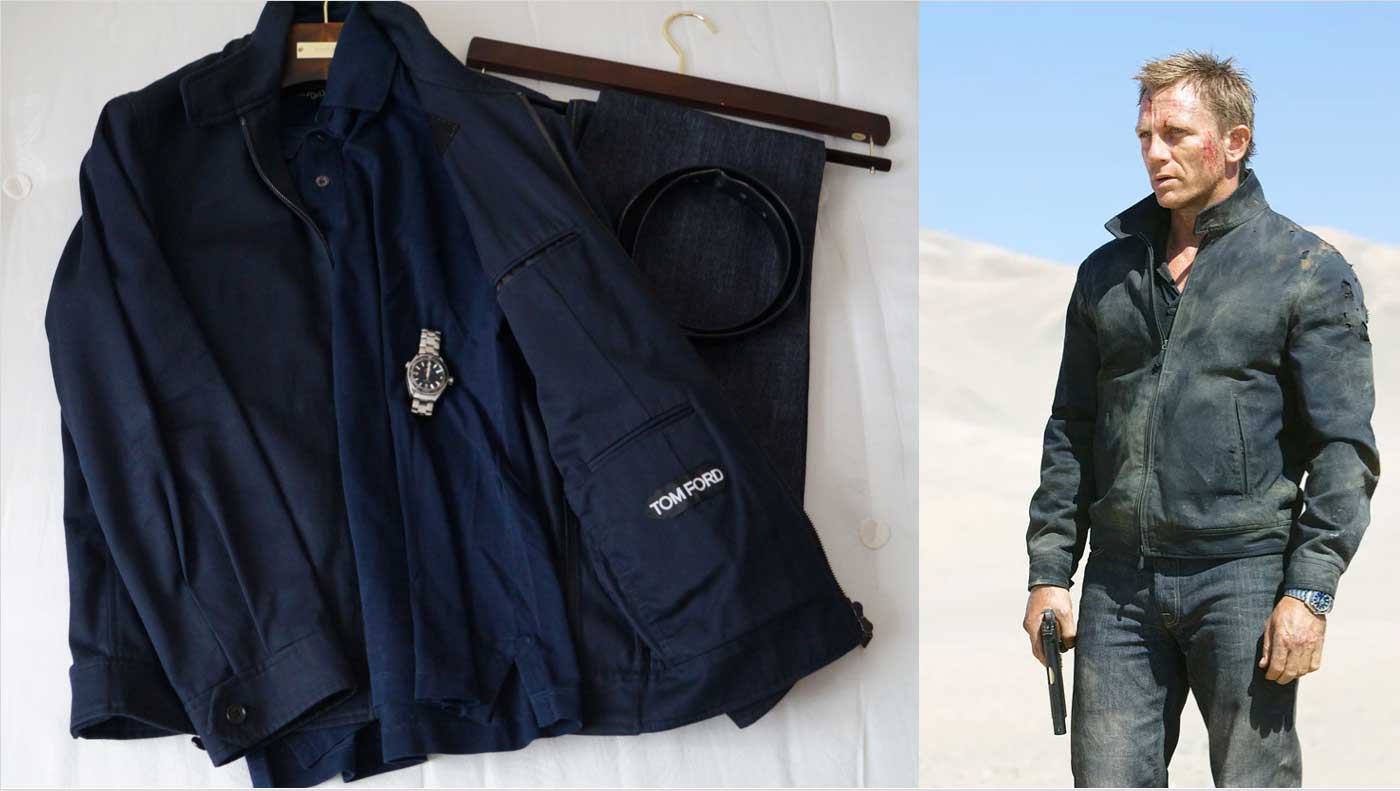 This review is on (in my opinion) the best casual outfit ever to feature in a James Bond film, that being the Tom Ford Harrington that is worn by Daniel Craig in Quantum of Solace. This outfit has a lot of screen time with Bond wearing it when he meets up with Felix in the bar in Bolivia and his subsequent escape from the CIA special forces.

He then wears the same ensemble with Camile when they attack the Perla de la Lunas hotel in the Bolivian dessert. The look is very classic and is a signature piece of casual clothing as seen in the Daniel Craig era of Bond movies. The review will not only cover the jacket, but also some of the other pieces that make this ensemble.

This is going to be a long read, so sit back, relax, get a drink, and enjoy.

Let’s start off with the jewel in the crown of this outfit and that is the Tom Ford Harrington jacket in navy, it is such a classic designed jacket and one that can go with almost everything for a very cool casual look. This jacket was from the AJB007 project to get a recreation, and I received this jacket almost 3 years ago, and is by far one of my used casual jackets.

The design of the jacket is a mix between the G9 and G4 Baracuta jackets, in terms of the cadet collar, and button tabs to adjust the waistband. The colour is a beautiful midnight blue navy, and such a dark colour makes it versatile, and being that midnight blue doesn’t make too formal as black. 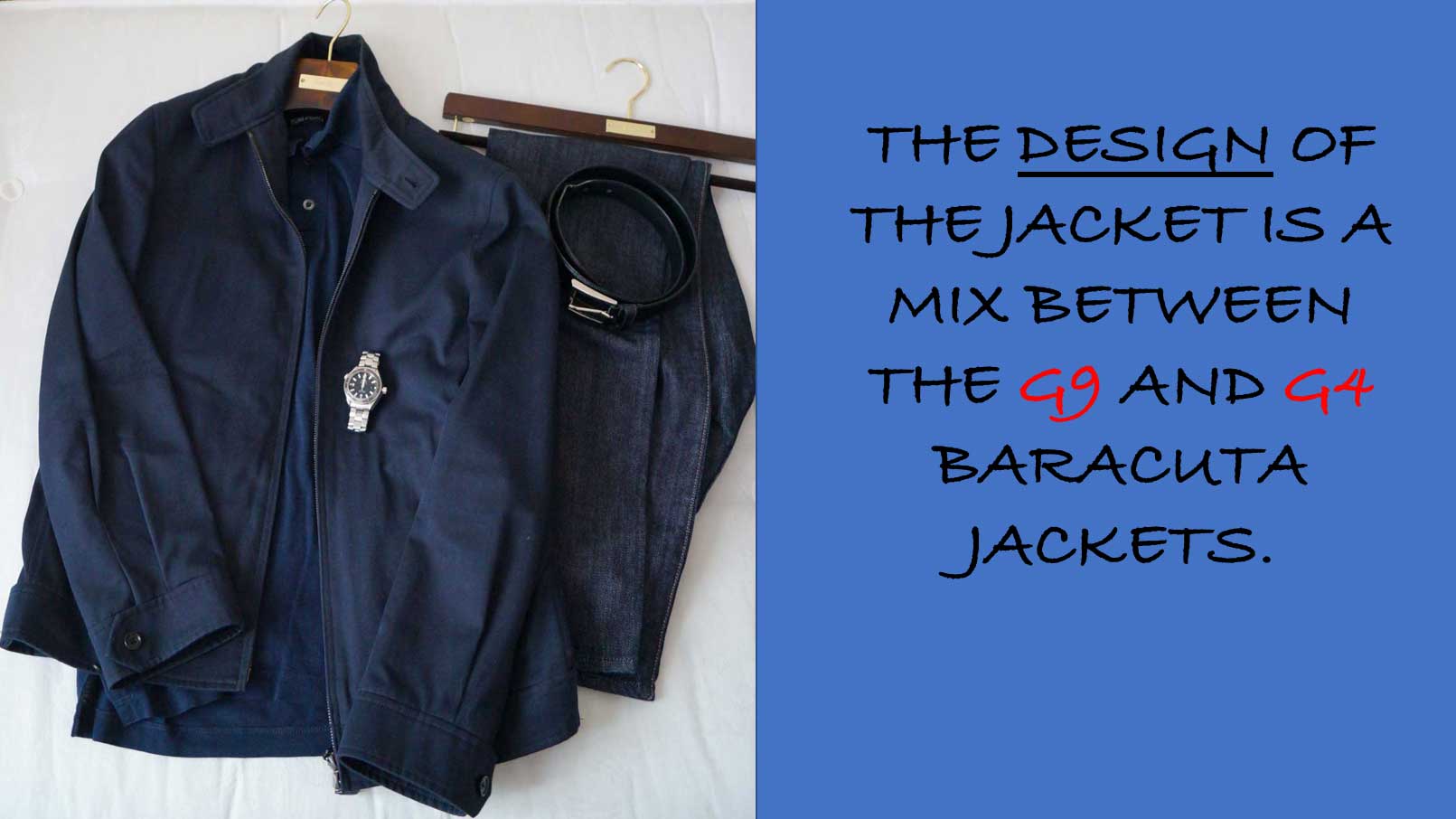 Let’s start with the zippers, the jacket has double zippers, and the design of the zippers are to be beholden, the leather zippers are in a trapezed shape in black, and they bear the TF logo on them, which is such a lovely touch. The buttons are amazing, Tom Ford used horn buttons, and these are used for button closures on the pockets; for the waistband; the sleeves, and for the collar closure, and on the back of the buttons it does say Tom Ford.

The buttons are similar to the horn buttons used on Tom Ford suits, and that is such a nice classy touch of elegance into a casual jacket. The pocket closure tabs are amazing. You’ll notice the same design is on the pockets and the tabbed waistband. The design again is very classic, and I do like that the pockets can close, it makes it more useable when wearing it.

The interior of the jacket is unlined apart from the shoulders and the sleeves. There are three interior pockets, making this jacket very functional. Again, the interior replicates some of the features in a Tom Ford suit in that you have a pocket for phone, wallet and others. Tom Ford allowed customers to customise the interior pocket patch, and you can put your name as well as another phrase, both lines were limited to 17 characters (including spaces), so I decided to maximise by putting “Quantum Of Solace”, which coincidently is 17 characters with spaces!

The fabric is a navy cotton twill, and it does create a little sheen, but it is an amazing fabric that is light and airy, making it wearable in several seasons.

I adore this jacket, not only because it captures so many scenes in one of the most stylistic movies in the Bond series but that it is a practical jacket. The jacket was never released commercially, and several of us Bond fans went on the hunt for alternatives. I had two. One was a Ben Sherman jacket that was similar, as well as getting a version from Magnoli Clothiers.

When the Tom Ford Harrington Jacket Project was launched, I immediately jumped at the chance of getting this wonderful jacket. However, there is a story, I misread the measurements and based on reviews of how the fit would be, I actually selected a size too small!

I received the jacket and it was just not workable. I felt gutted that after such a long time when I actually had the chance to purchase this jacket that it didn’t fit. But fear not, the great Luigi from Tom Ford was on hand, and his customer service was excellent. He invited me to the Tom Ford London boutique where I took the jacket, and with the help of the in-house tailor identified what was needed.

He suggested an extra panel of fabric between the back and the front of the jacket was needed, and that there would be no cost in terms of any alterations. A few weeks later, I got the jacket, and it was perfect, it was so hard to see the extra fabric unless you actually pointed it out, the repair work was seamless.

I adore this jacket. It is my go to and I have worn it well. For those of you who are interested in getting a navy Tom Ford Harrington there is another project on AJB007 , just register on the forum and add your name to the list, but be quick! Do also check out Daniel Love’s version on Royale Filmwear for a frugal alternative. 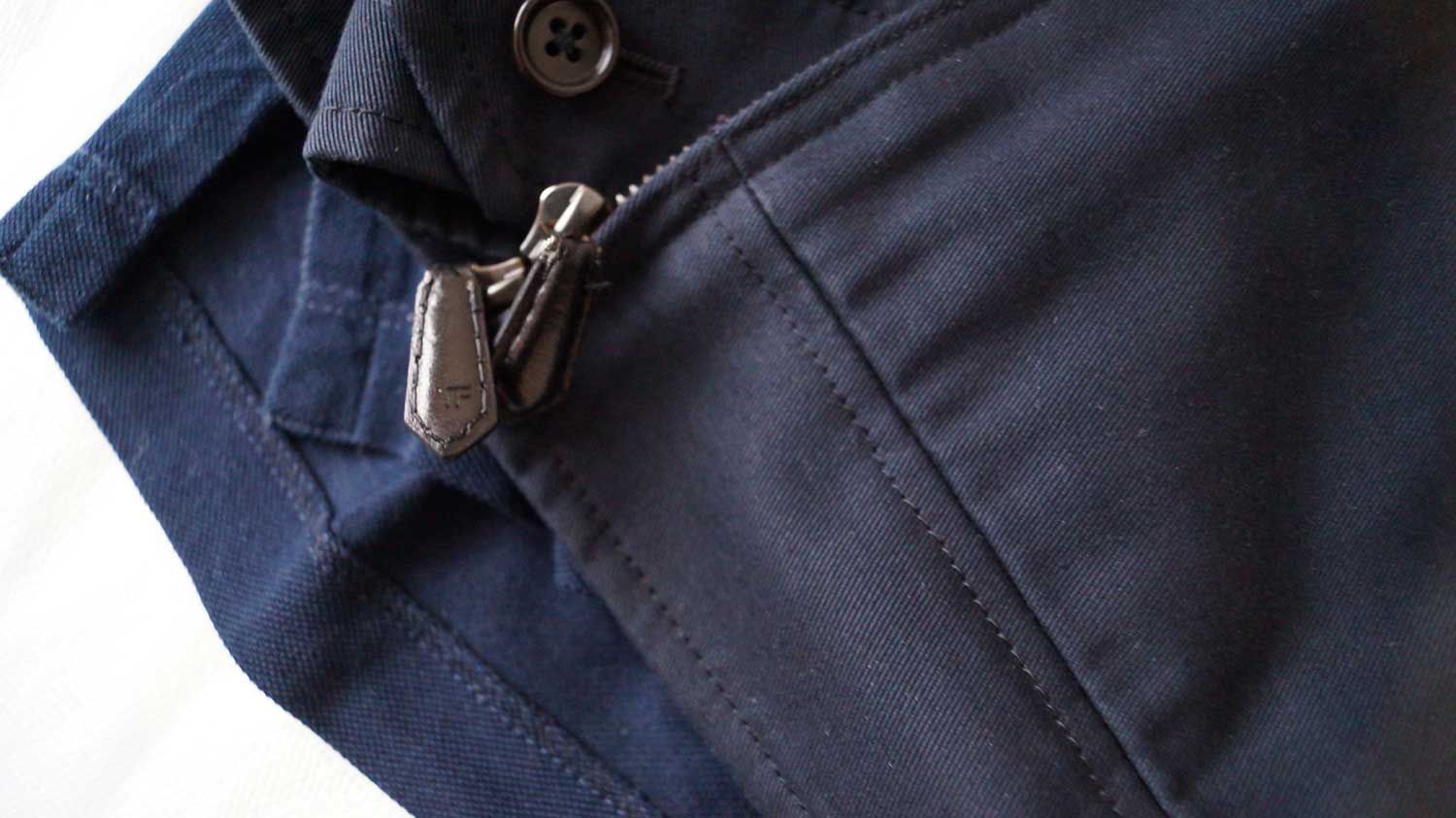 I will caveat that this is not the same polo shirt that was featured in the film. This is a Tom Ford navy polo shirt that does have most but not all of the features as seen on the screen. I bought this pique navy polo shirt from Tom Ford directly a few years ago. It was a good fit, although it didn’t have the pocket as was seen in the film. In terms of the design, it is very classic, the sleeves are a good length, not as short as the Sunspel Riviera polos.

The polo is very nice, and is 100% cotton, and there are some lovely stitching details on the sleeve. Another nice features is the TF logo which is on bottom left of the polo shirt. A similar version of this polo shirt is available from Tom Ford. However, for those wishing to get a screen accurate version, there is another project on AJB007  again register on AJB, and add your interest, and be quick!

I have used the same 7forallmankind mercer straight bootleg cut indigo coloured jeans, these were the same cut and colour as the one seen on screen, however, there is a detail that is missing from the jeans, at the back there is one belt loop, whereas on film, there are two belt loops.

This is a minor point, I really liked these jeans, so much so that I bought two pairs, and the one in the photos is a new pair, and it gives a good representation of what the jeans looked like on film.

The pair I wear have got lighter through wash and wear, but these are a great and comfortable pair of jeans. When I went to the 7forallmankind store in central London in 2011, when I was getting them tailored the sales assistant commented that these were a very popular pair. I then told her why as there were featured in the Bond film.

Anyway, the next time I went to collect, she proudly stated here are the James Bond Jeans!! Alas the jeans are no longer available. 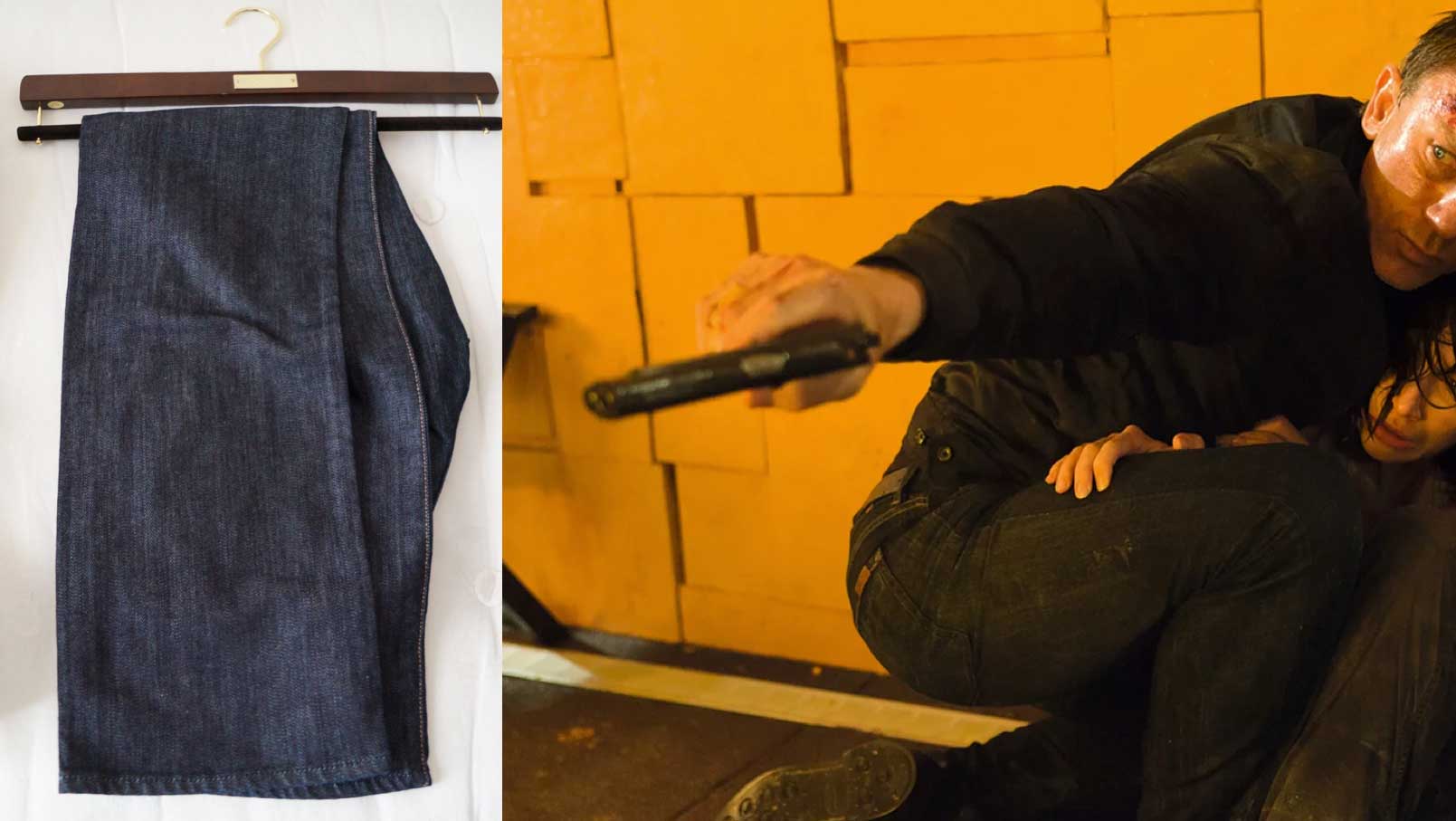 The belt used in the film is a lovely Prada Saffiano belt, this leather belt has a lovely thatched leather design and a polished silver coloured buckle. The belt was initially identified from a behind the scenes photo taken by Greg Williams, indeed in that photo it captures a moment where Daniel Craig was almost a dead ringer for Steve McQueen.

The correct version of the belt is where the name Prada is on the buckle, and for some time the belt was not produced or made available. However, a variation of the belt with the right features is now available for sale from Prada’s website. This is a nice belt, and over time the leather has softened. In fact this is my daily wear and it goes well with smart trousers and jeans. 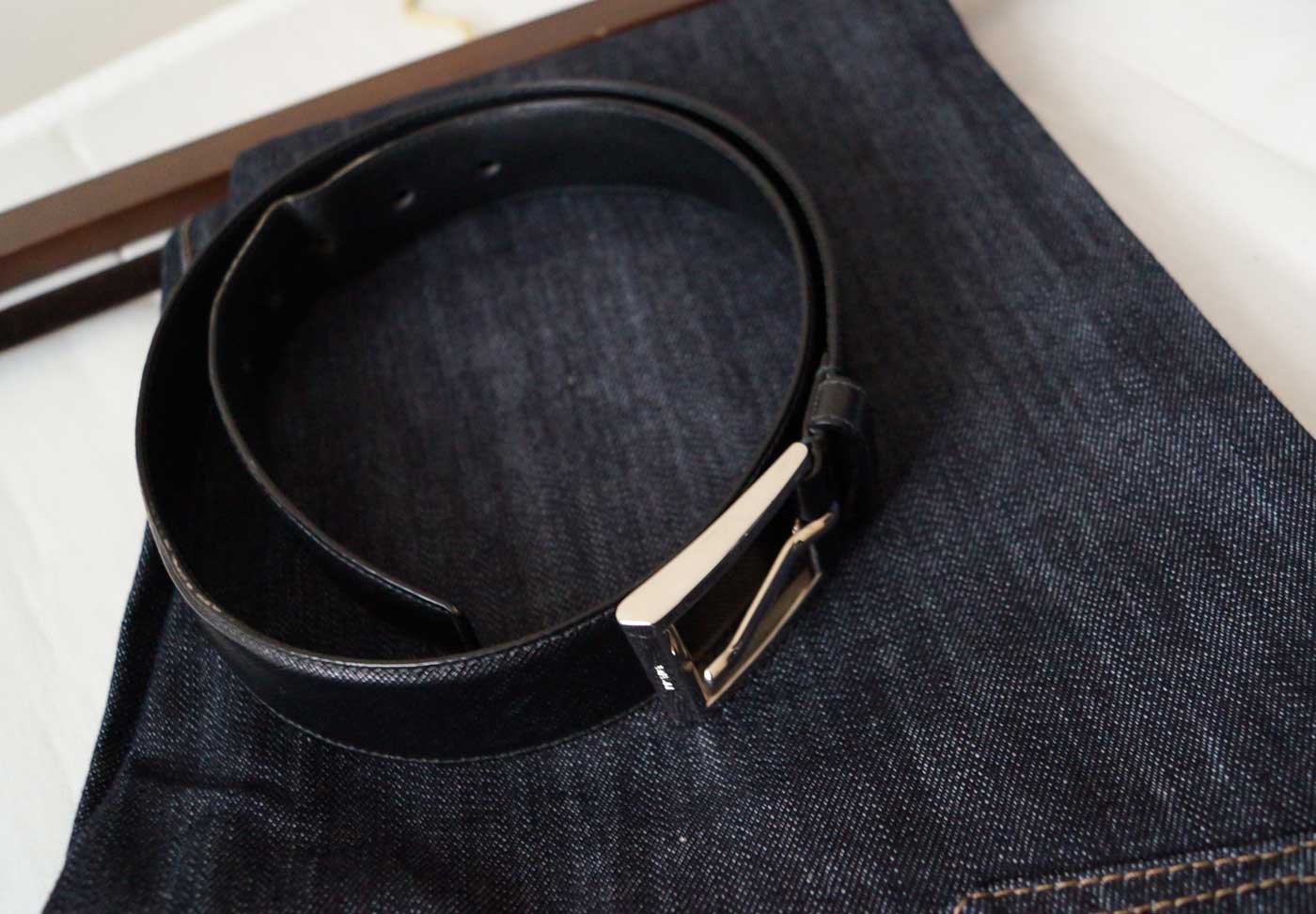 The Church’s Ryder III brown suede chukka boots are an amazing choice. They are stylish, comfortable, and durable. I have had my pair since 2010, and they are a staple of mine, and I wear these boots not only with jeans, but also chinos and other casual attire. For an in-depth review, please check out Dan Gaster’s review, which is very comprehensive.

My own thoughts on these boots are that they are amazing and fit so well, and I do use these boots (especially when it is not raining!).  The boots are still available from Church’s.

The Tom Ford TF108 19v James Bond sunglasses are an inspired choice and just complete this ensemble. The aviators are just so iconic, and it is probably the only piece of Tom Ford merchandise that has included James Bond.

The sunglasses have been previously reviewed by Daniel Gaster, and I can only echo his sentiments and views. I obtained these glasses from another collector and friend, and it is amazing how much these sunglasses are going for, but it would have to be a very tempting offer to part with this amazing pair of aviators. 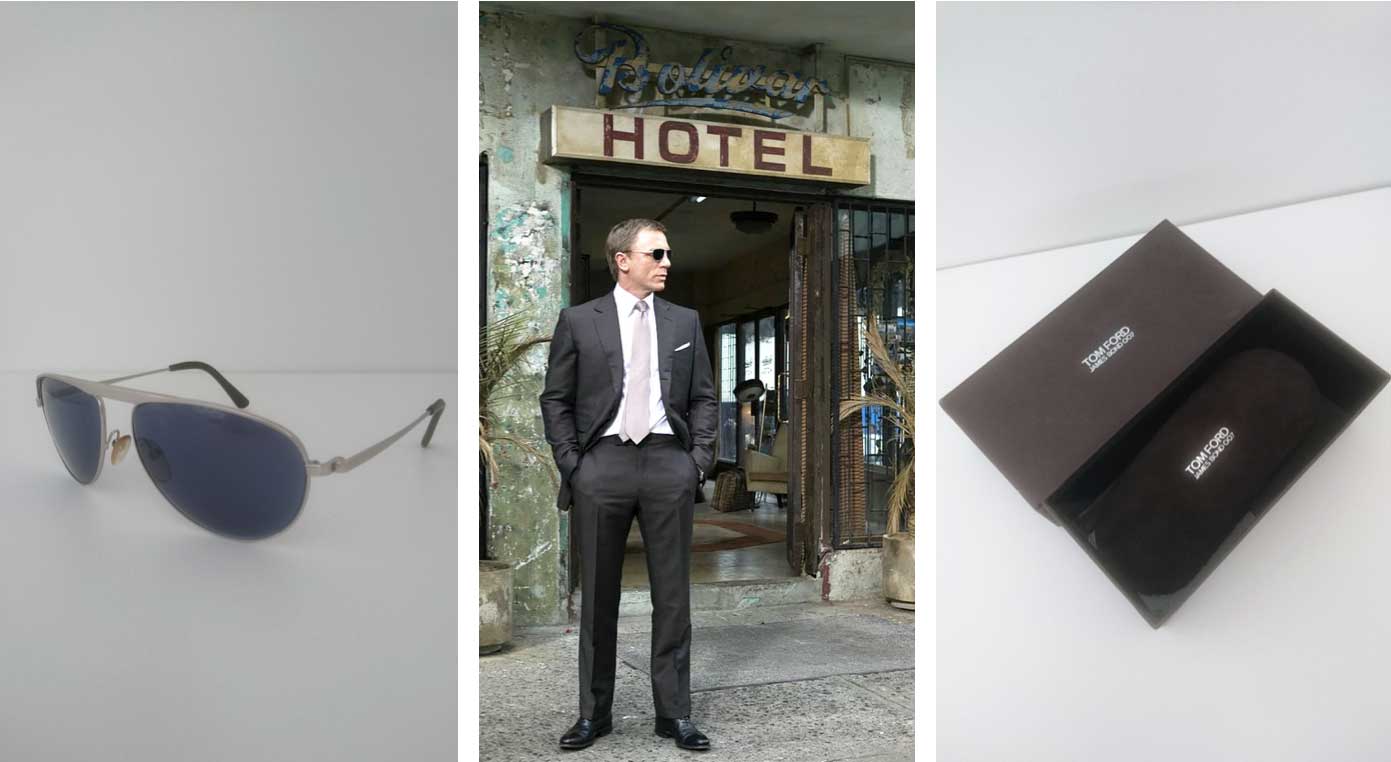 (A DROP IN THE) PLANET OCEAN

I was not able to get the Planet Ocean model as worn by Daniel Craig in Quantum of Solace, instead I have used the Planet Ocean from Skyfall. Either way it looks amazing alongside this ensemble of magnificent pieces. 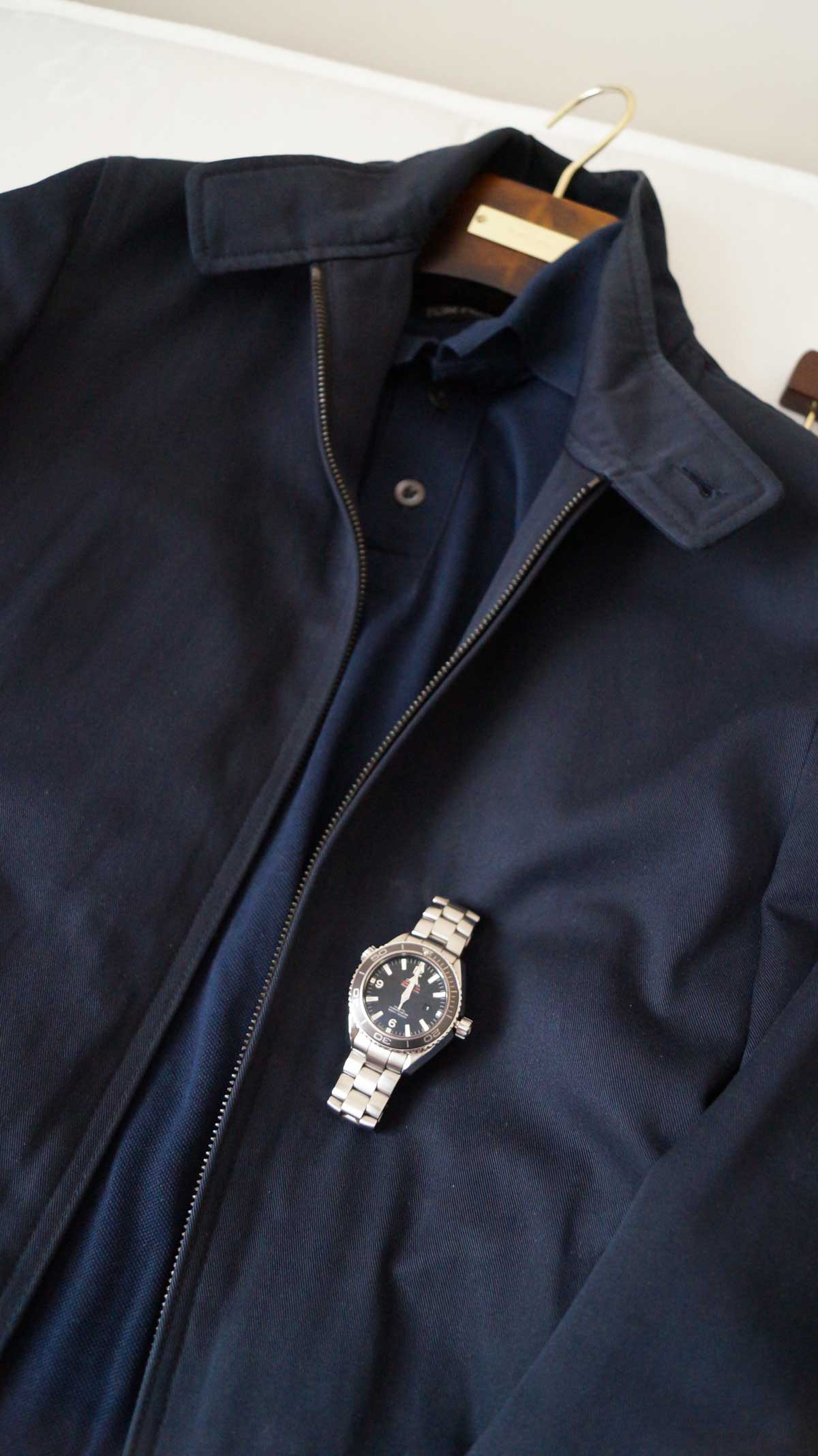 For me this is the ultimate casual Bond outfit, it is practical, versatile, classic and timeless. I could wear this jacket in 20 years’ time and it will still look cool! I have worn this jacket over formal shirts and trousers and it still looks fantastic. Some people may complain of too much colour block of blue on blue, and whilst that is a valid point, it is an easy outfit to wear and looks great.

For me the journey to get this outfit has been mixed, but along this journey I have made great friends, had some amazing experiences and learnt a lot about myself and casual clothing. Overall, it took me about 10 years from the purchase of the Church’s boots to getting the jacket. 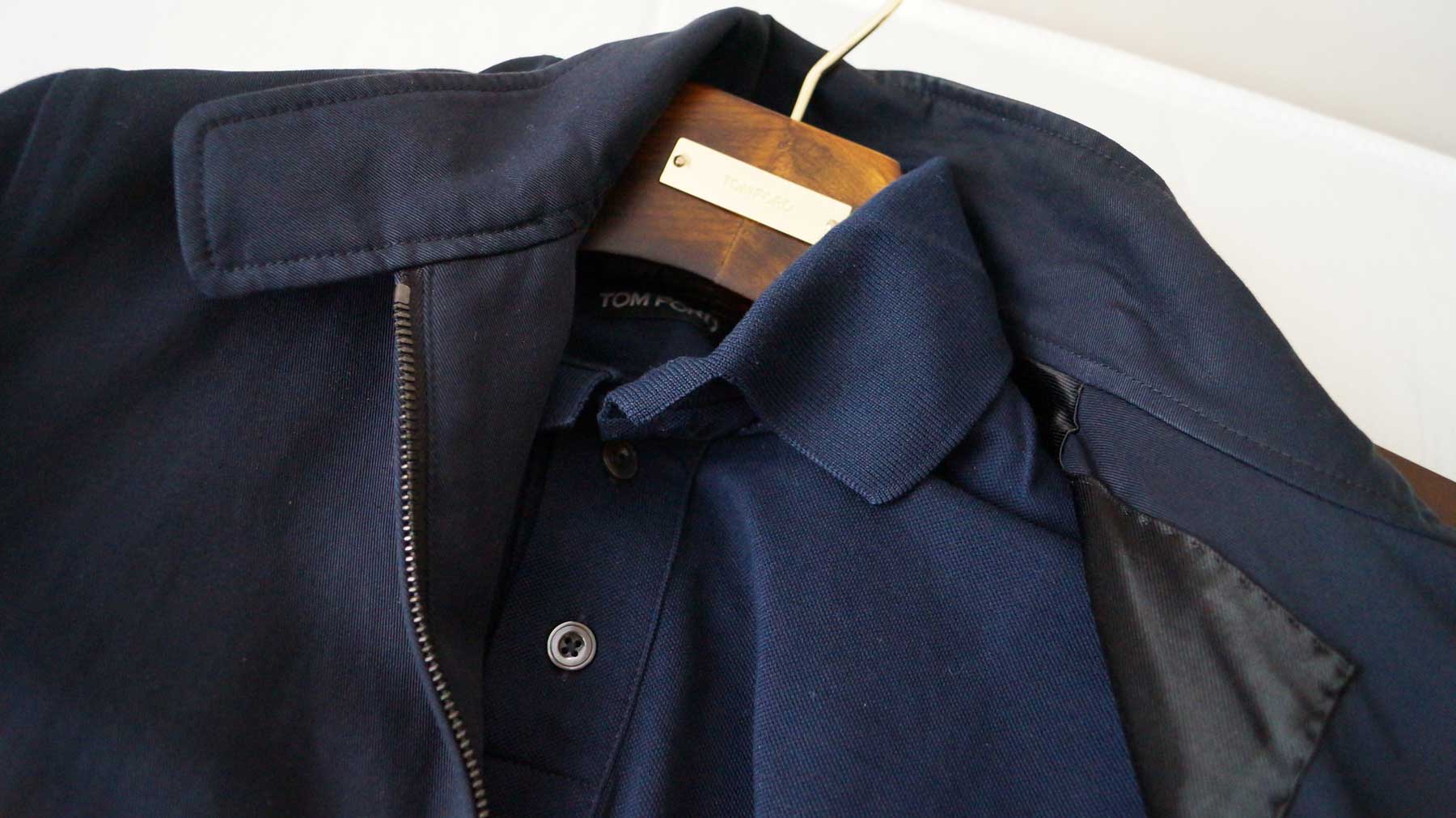 Quantum of Solace is the ultimate James Bond style movie. It has great suits, but more importantly great casual wear, and whilst it is not a frugal ensemble, the customer service that Tom Ford has provided makes this so much more appreciative then buying an item off the shelf. This is an 11/10 for me, and one that I will continue to wear for years to come.

I do have to thank Simon Ruzgar and David Zaritsky for spear heading the Tom Ford Quantum of Solace Harrington Project, without their steadfastness and stamina I wouldn’t have had the chance to get this jacket.

Some images within this post are the copyright of their respective movie studio and are reproduced here under the Fair Use doctrine. All images of Daniel Craig courtesy of www.Thunderballs.Org the unofficial James Bond website.