.. by Church’s, known as the Ryder 3, are one of two styles of Church’s shoe that James Bond wears throughout Quantum of Solace. These ones with Bond’s more casual outfits throughout the film. 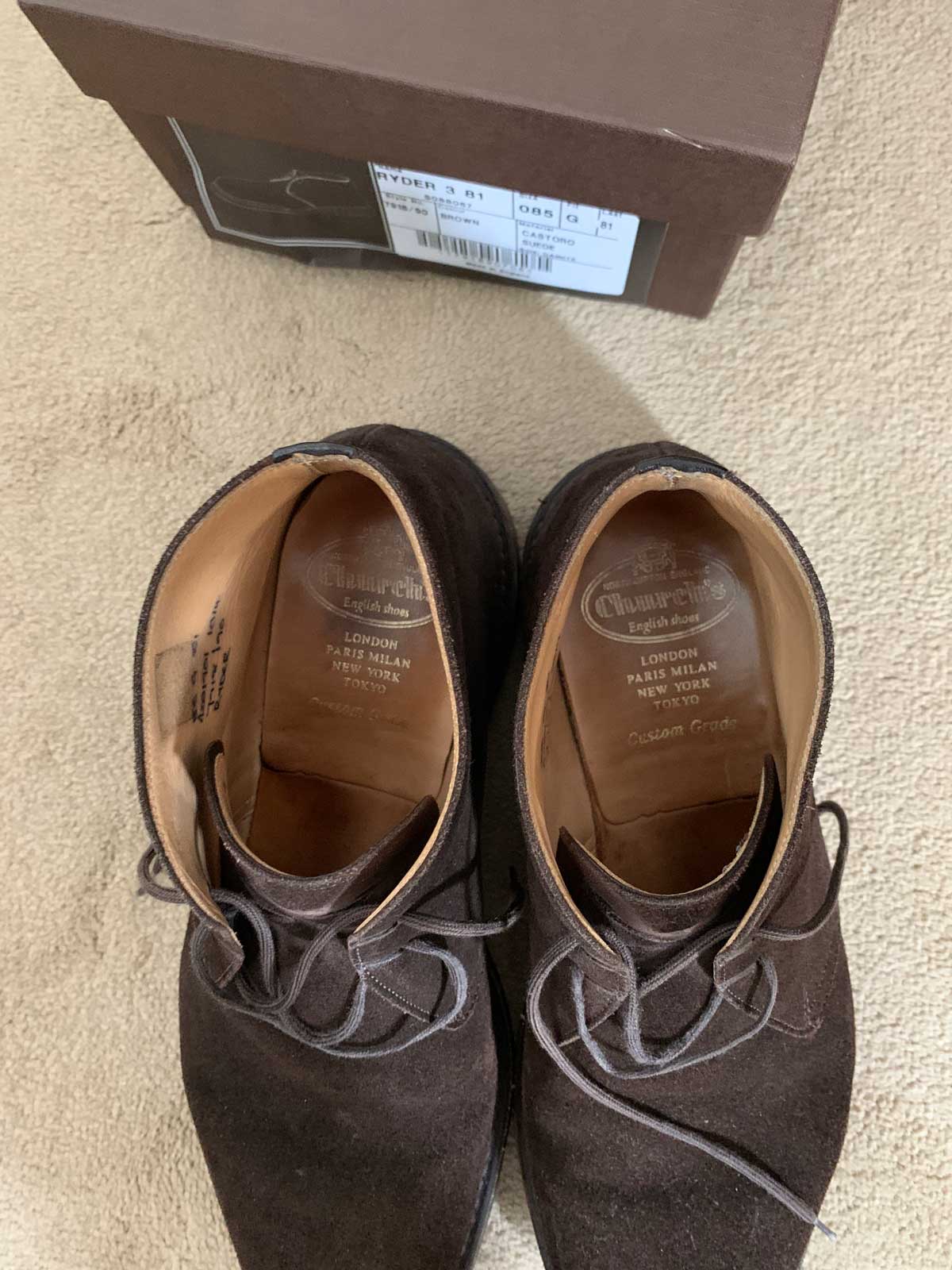 The right place and time

I remember buying these for a trip I was taking with my family in the December. So, I bought them especially so that I would have something comfortable to wear, that would go with mostly casual outfits and be classically stylish.

At the time I already had the Crockett & Jones Highbury shoes and Tetbury boots. Having got rid of most of my other shoes I wanted something in brown.

At the time I was getting my suits from Austin Reed, which was a menswear store in the UK up till about 4 years ago when they went into administration. They came back purely online for a short spell, but that seems to have been discontinued. At the store I used to frequent in Leicester, they had a Church’s stand with a small selection.

One day in October I asked if they had any others, specifically asking about the Ryder 3. They didn’t, but they did offer to see what they could get their hands on for me. Within the week they got back to me, saying they could get hold of the boots in both an 8 ½ and a 9.I went back the following weekend and tried on both pairs, settling with the 8 ½ for the perfect fit. 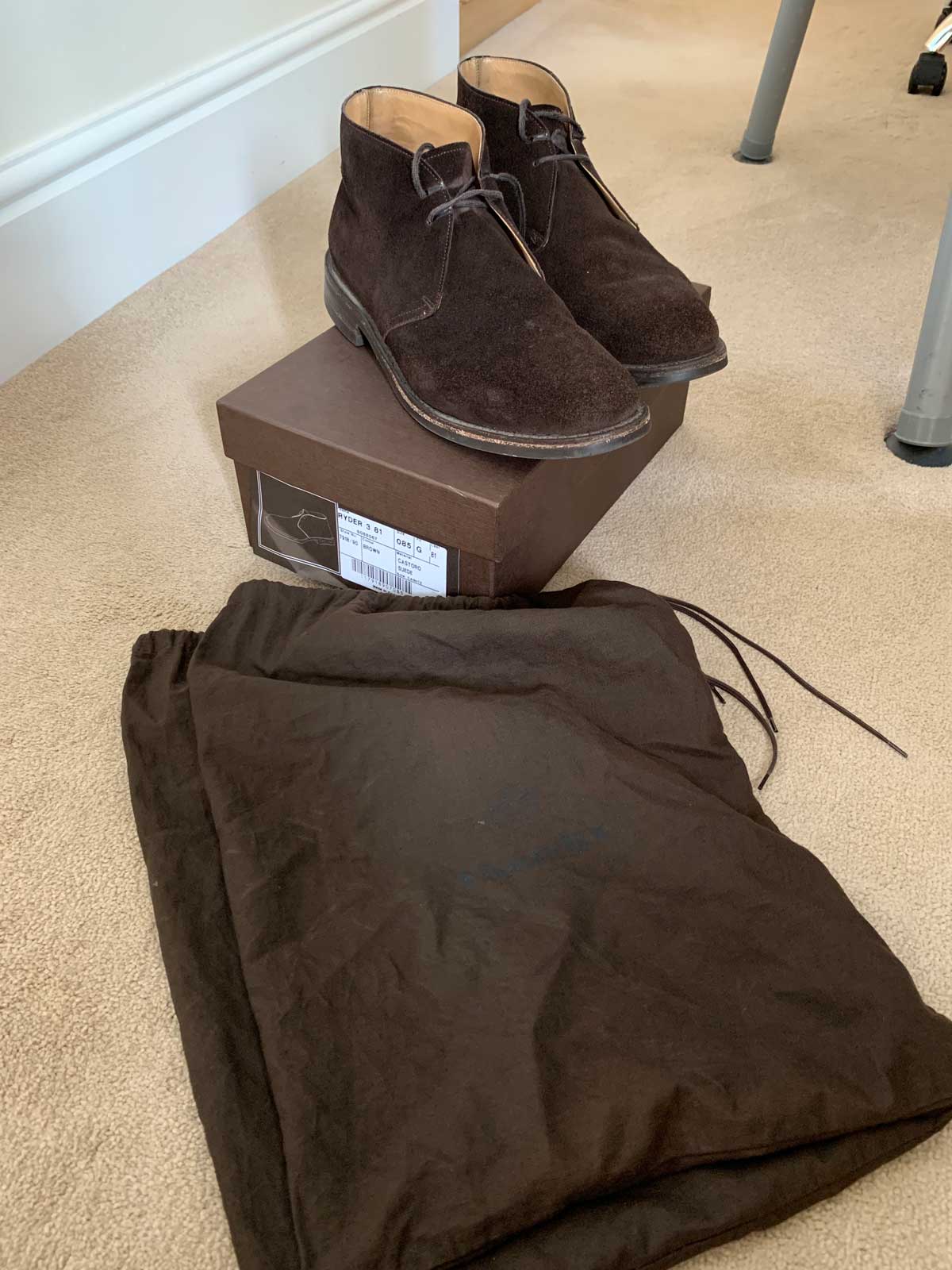 He had to buy

At this point all of their Church’s were in the sale and I was able to get these for less than £200. At least that is what I remember. I don’t have the receipt for them now, or any record for me to check, so this is more belief than fact.

I know I got a massive saving on them; it could have been because Austin Reed were ending their partnership with Church’s? I don’t quite remember all of the details. I do know at the time they were around £300-£350. As of March 2021, they are £410.

To begin with these desert boots felt really comfortable. They aren’t as narrow as the Tetbury boots (from Crockett & Jones) and have a little more room in the toe end. After wearing them in the house for over a week, I dared to then take my first steps outside. 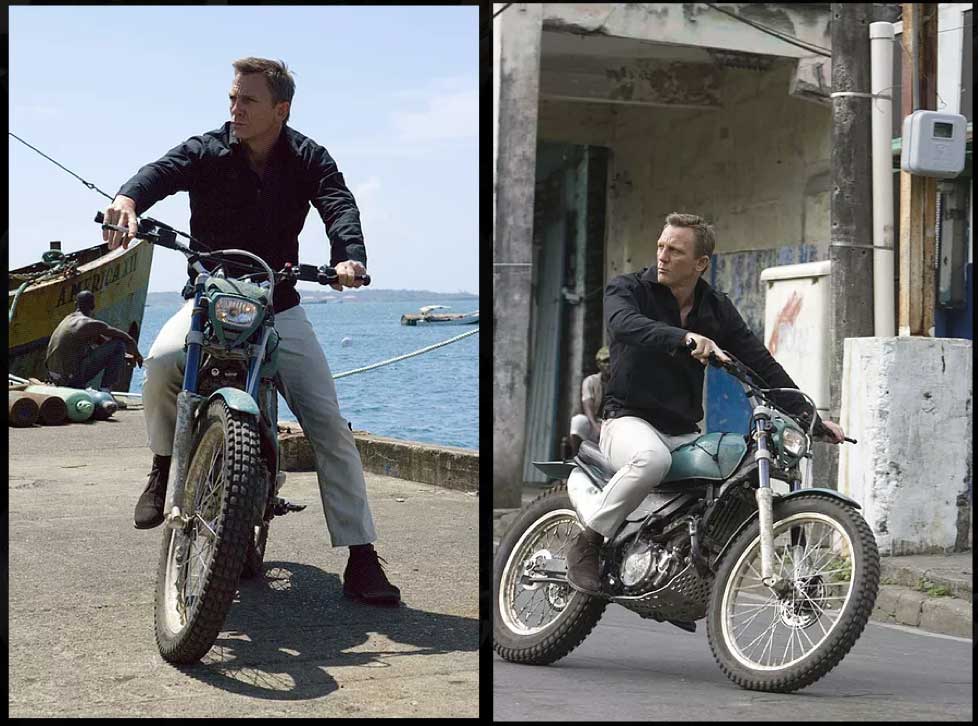 No ma’am, I’m with the economy tour!

My first mistake was to wear these desert boots on a plane. Why? Well, we flew economy, and being 6ft means my feet were under the chair in front. I ended up marking the sides of my new boots from the underside of the chair!

Once we arrived, I was wearing them almost all the time. They were comfortable walking around the cities that we went to as well as the countryside. To me they fitted in everywhere.

However, I’ve always been a little fearful wearing these desert boots since. As I’d already scuffed them badly (which can still be seen) and thought that I’d be ruining them further.  As a result, I haven’t worn them out as often as my leather boots. (Specifically, I tend to wear the Islay boots the most). You can tell this by looking on the Dainite sole of the Ryder 3’s, there’s not much wear to them.

As a result, I tended to only wear them in the warmer climates of spring and summer. Knowing that they are less likely to be ruined. 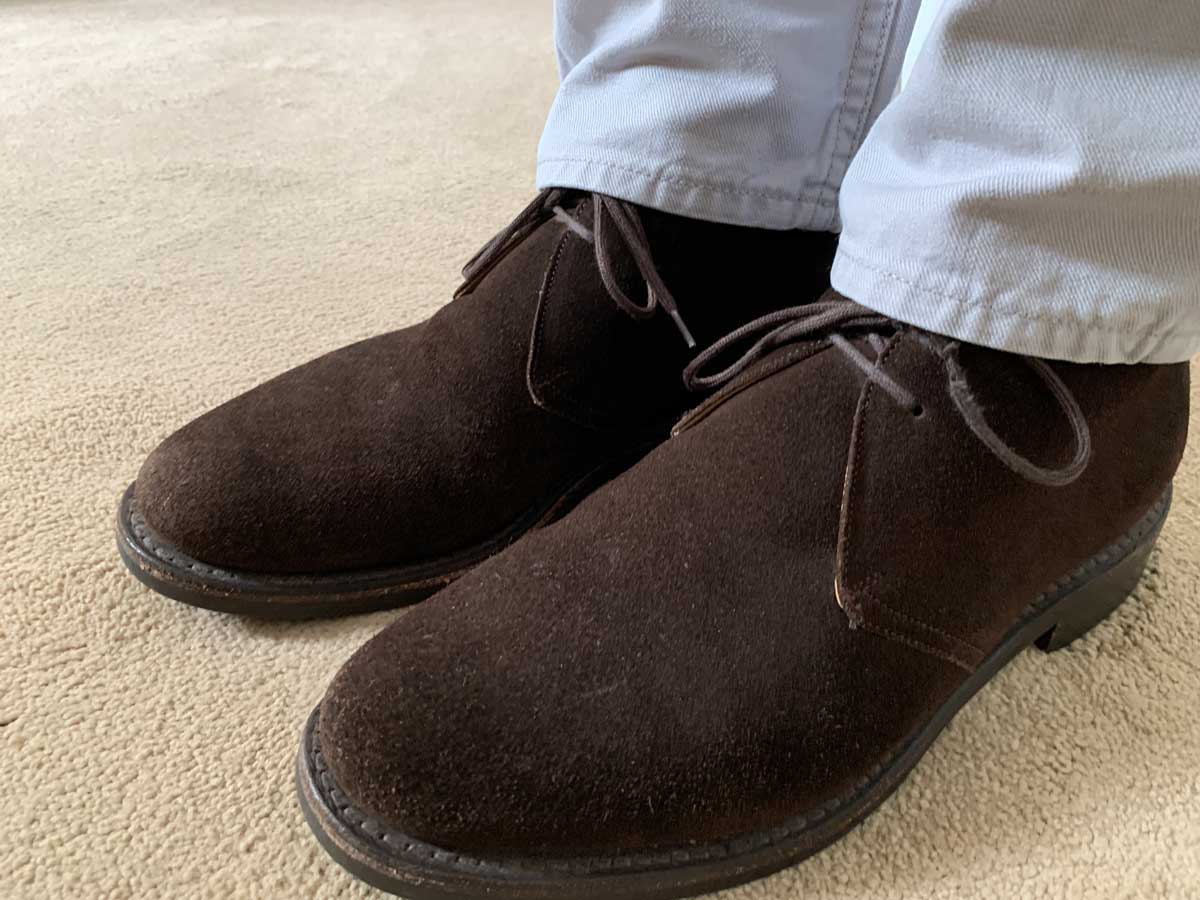 These boots were made for walking

Of late I have been wearing them a lot more. And the thing is, these boots work well with so many differing styles I’m surprised I’ve not given them the love they deserve.

They are extremely comfortable, even after all this time. Like I mentioned I don’t think they are as narrow as the Tetbury, which has a closer feel (which I do tend to prefer), but they don’t rub, my feet feel secure in them, so I could run a little in them without causing damage.

They are quite versatile too, you can wear them with smart-casual and casual outfits, but I have on occasion worn them with a suit, usually blue, but also my more casual linen suit in a sand colour. 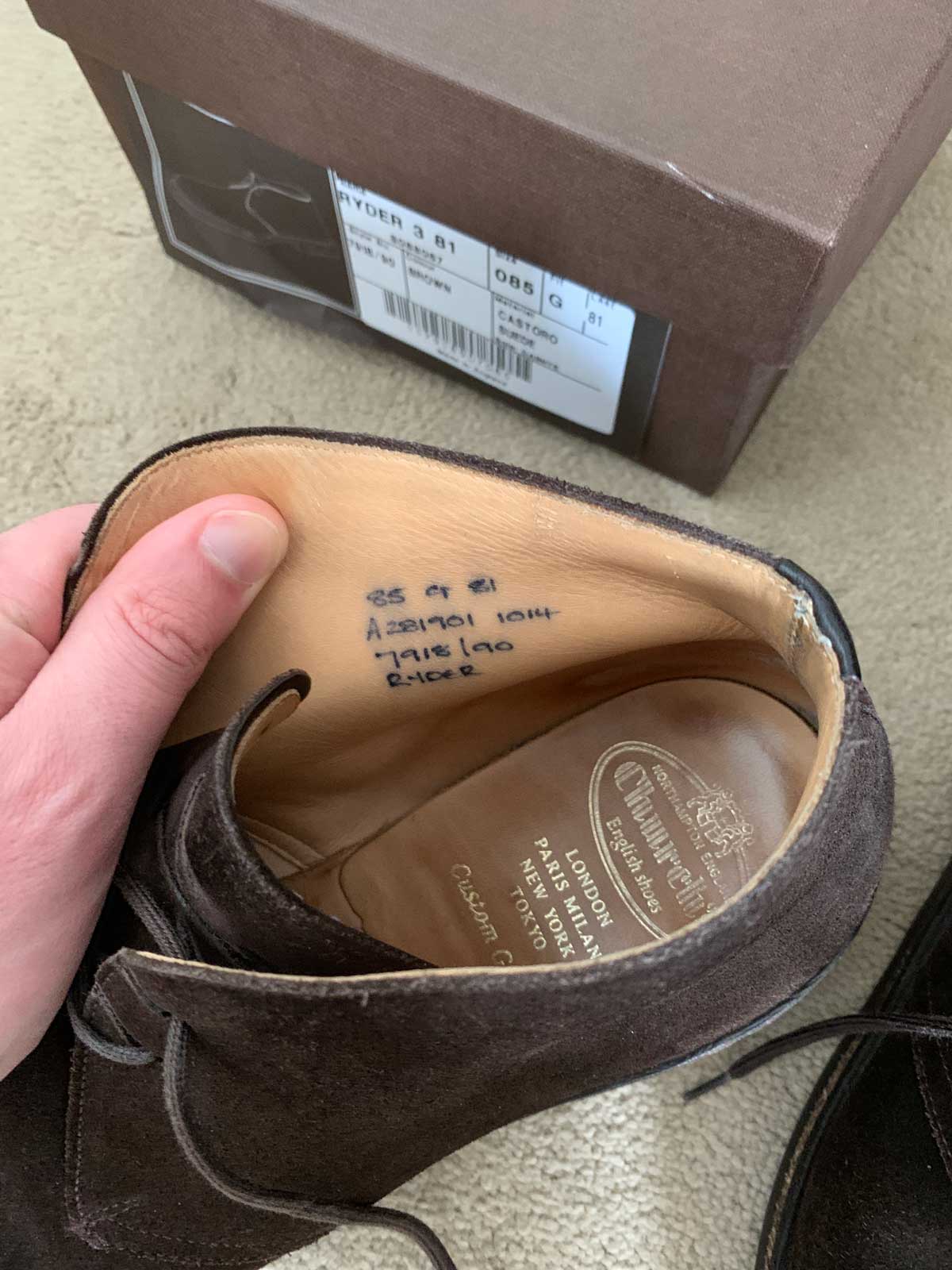 I put these desert boots into Church’s shoe trees to maintain their shape. I then place them in their brown Church’s shoe bags, in the original brown box. The shoe trees I bought from the Church’s factory shop in Bicester Village.

The shop not only offers shoes and boots second hand that were not quite right to sell at full price, but also sells other accessories at discounted prices. I go there (pre-pandemic) to get all my brushes and shoe cleaning items.

Every so often I’ll give them a brush over with a suede brush or if I’ve got a blemish on them, I’ll use a suede cleaning block on to try and remove the mark (which doesn’t work as well as I thought) before bushing them. Followed by a good dousing of suede protector.

I have recently seen on the Crockett & Jones site Renovator Suede Spray in Dark Brown, which I’d like to try and cover some of the patches which I’ve tried to comb out or erase with the cleaning block where they have discoloured slightly. 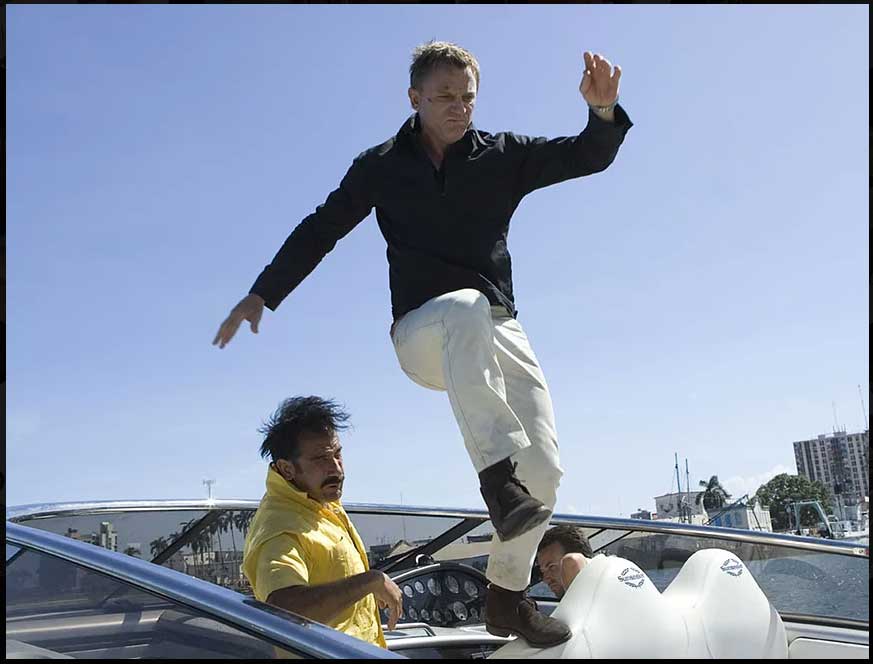 A Quantum of reflection

These desert boots are one of the few Quantum of Solace items that I own. They are a fantastic investment for someone wanting to up their footwear game. They are timeless. I cannot see them going out of style anytime soon.

For a long time, I think I worried about ruining them. In my opinion spending money on something that I wouldn’t wear is a waste. I would not justify buying an item of clothing just because it is Bond related and then leaving it unworn in the wardrobe. That’s just not me!

Part of the reason I have gravitated to Bond sartorial items, is because they are well made, quality products. Something that I invest in, not just because it’s a Bond item, but something that will last for a long time, when worn.

It’s a big part of why I wanted to write these reviews. Not for something I’ve had for only a month. But items I’ve had and worn for years, and how they have done in the time I have had them.

For Daniel Gaster on Instagram and check out further product reviews here. Some images within this post are the copyright of their respective movie studio and are reproduced here under the Fair Use doctrine. Have sourced through Screen Musings and ThunderBalls respectively.