How the Steve McQueen style has inspired Daniel Craig | #34

On this weeks episode of From Tailors With Love we discuss the style of Steve McQueen and how it has inspired Daniel Craig.

In researching this episode I returned to one of my favourite fashion books ‘The Icons of Mens Style’ by Josh Simms. And in doing so, you can clearly see some of the through-lines between McQueen and Craig. 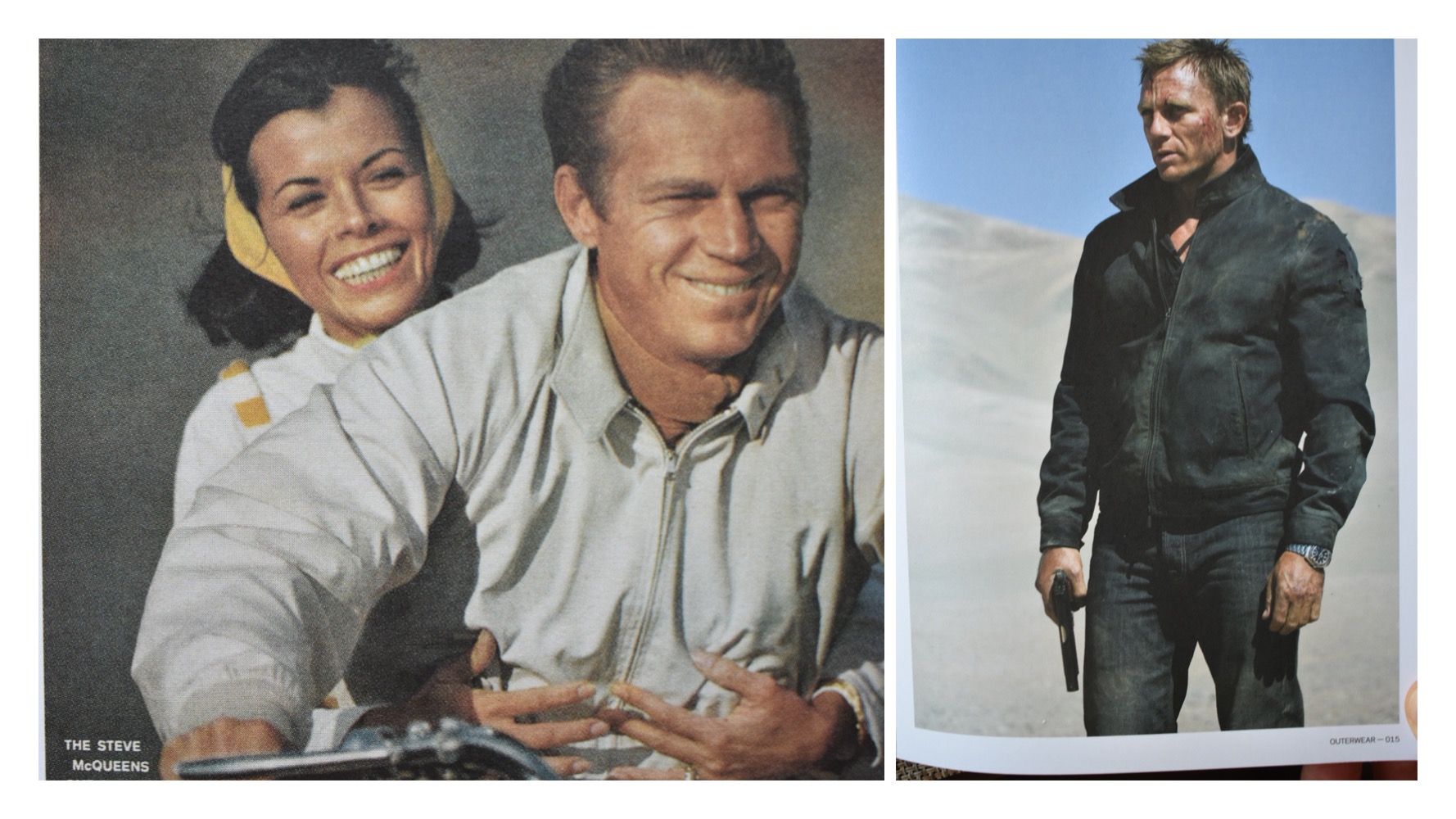 More directly I’ll briefly refer to the Harrington and the Pea Coat.

McQueen wears a G9 blouson on the cover of Life magazine in 1963, reviving the look first seen on Elvis Presley in the 1954’s King Creole, then a year after on James Dean in Rebel Without a Cause.

Bond has worn many blousons before the arrival of Craig’s Bond, but you can draw significant comparisons between McQueens love affair for the Harrington to the battle-scarred G4 version of the Baracuta that Craig wears in the final act in Quantum of Solace. 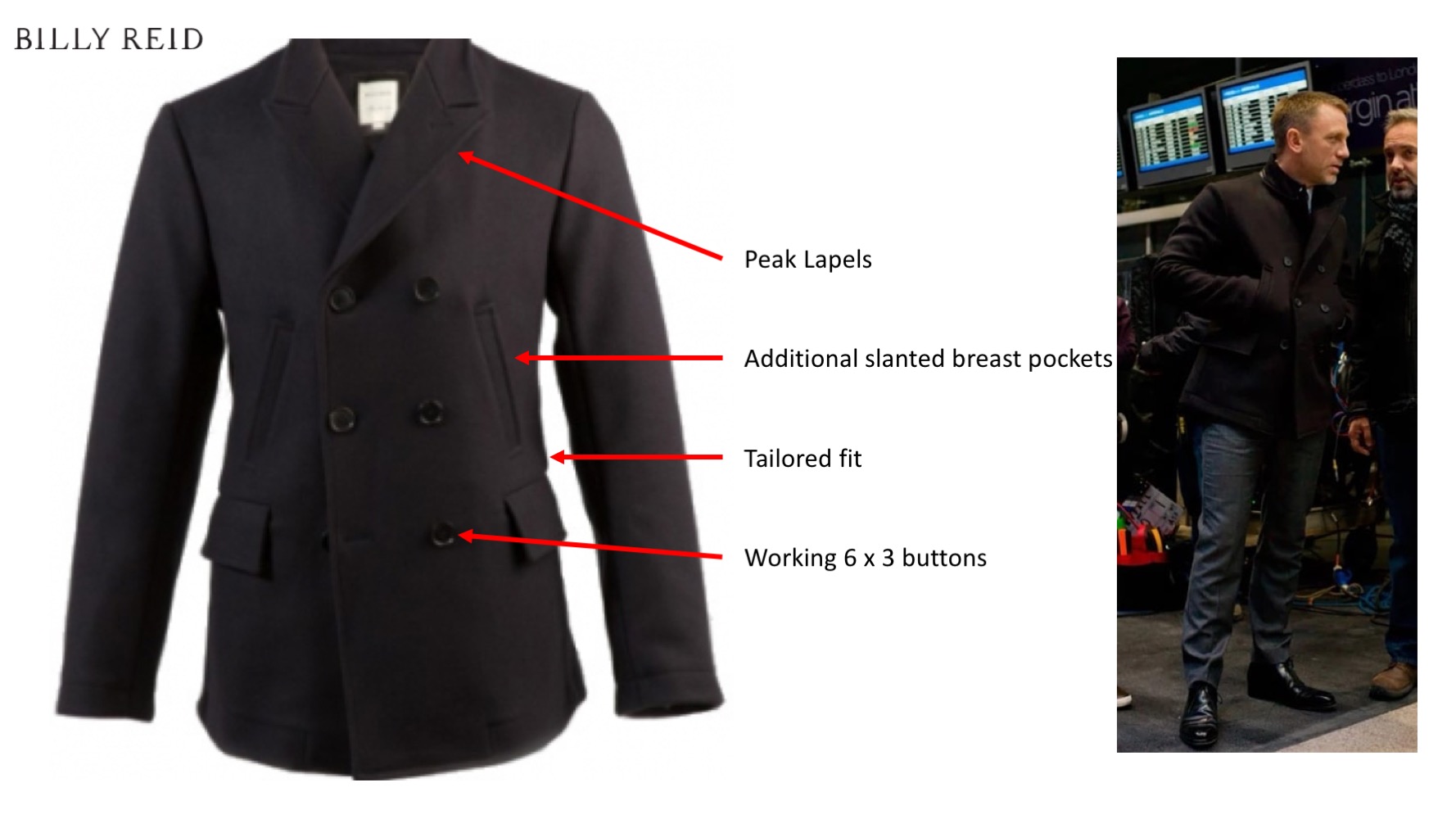 Fast forward 3 years, and McQueen stars in his only oscar nominated performance, The Sand Pebbles. An American war drama set in 1920’s China.

The Navy Peacoat that McQueen wears in The Sand Pebbles is a look embraced by James Bond in the Shanghai scenes in Skyfall. The Billy Reid Navy Peacoat that Craig opts for is arguably more design led whereas the Alpha Industries Peacoat Steve McQueen donned is clearly more for utility.

The Alpha Industries Peacoat has the more traditional military design of the wider frog-mouth lapels and the working 8 x 4 buttons. The Billy Reid peacoat that Daniel Craig wears in Skyfall when he visits Shanghai is more design led, with a trimmer cut, lesser buttons which allows for two skirt flap pockets. 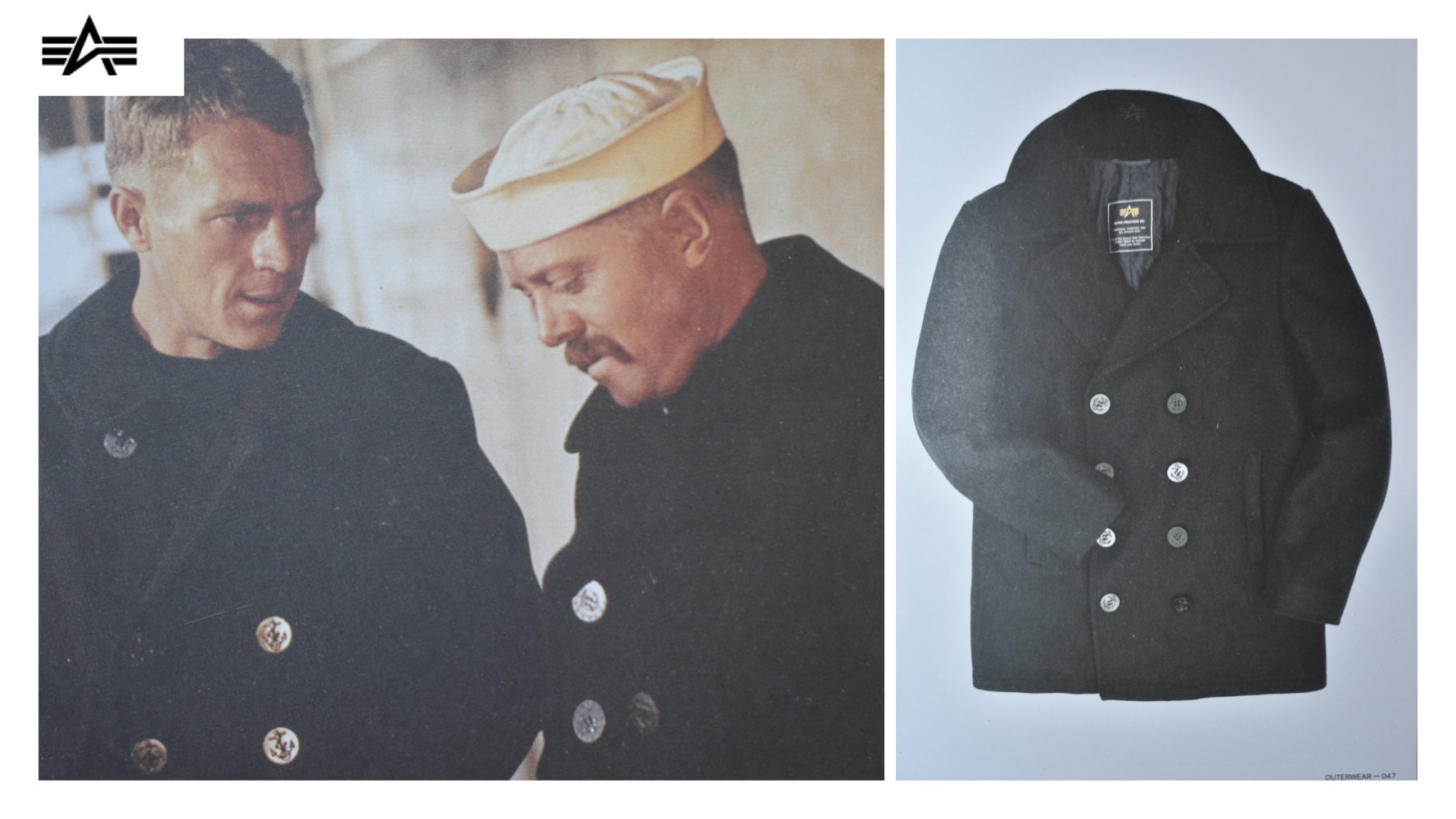 Guests on the Podcast

Joining me on the this episode as ever is my co-host Matt Spaiser from the Suits of James Bond and John from Iconic Alternatives. John’s website is a hive of accessible iconic film wear. John had this to say about Steve McQueen.

“Steve McQueen was an original he was one of those few actors of that generation that could move through the late 60’s era when style went completely off the rails with the bell bottoms etc.

McQueen was able to retain a classical American style and maintained his cool. For example he was cool in a tweed jacket when everyone else was wearing denim.” 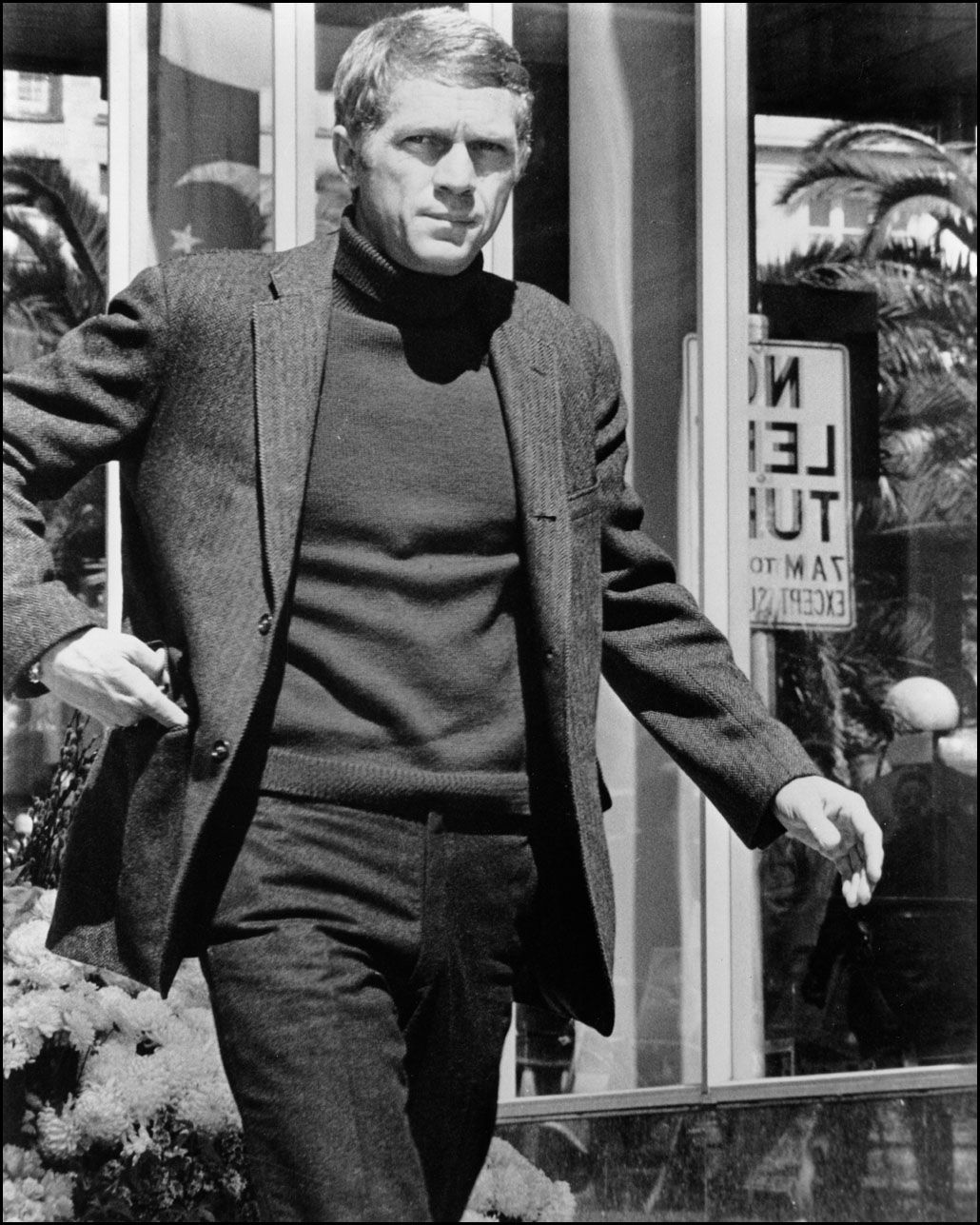 On the podcast you’ll also hear Chad McQueen talk about his Dad. Chad reflects on his fathers style.

“He did not dwell on himself at all, its just the way he was. He always would say put on what you want as long as its clean. I have the jacket my dad wore in Bullitt.

My dad was very thorough with what he wore and what he drove. But when filming was done he wiped his hands with it. For some reason he kept the jacket from Bullitt.”

Chad also mentioned in passing a conversation he had with former James Bond, Pierce Brosnan.

“My neighbour up in Malibu is Pierce Brosnan I was with him a couple of months ago and he said the same thing. You’re old man was a style icon made me feel really good. That meant a lot coming from him as he was a stylish cat in his own right.” 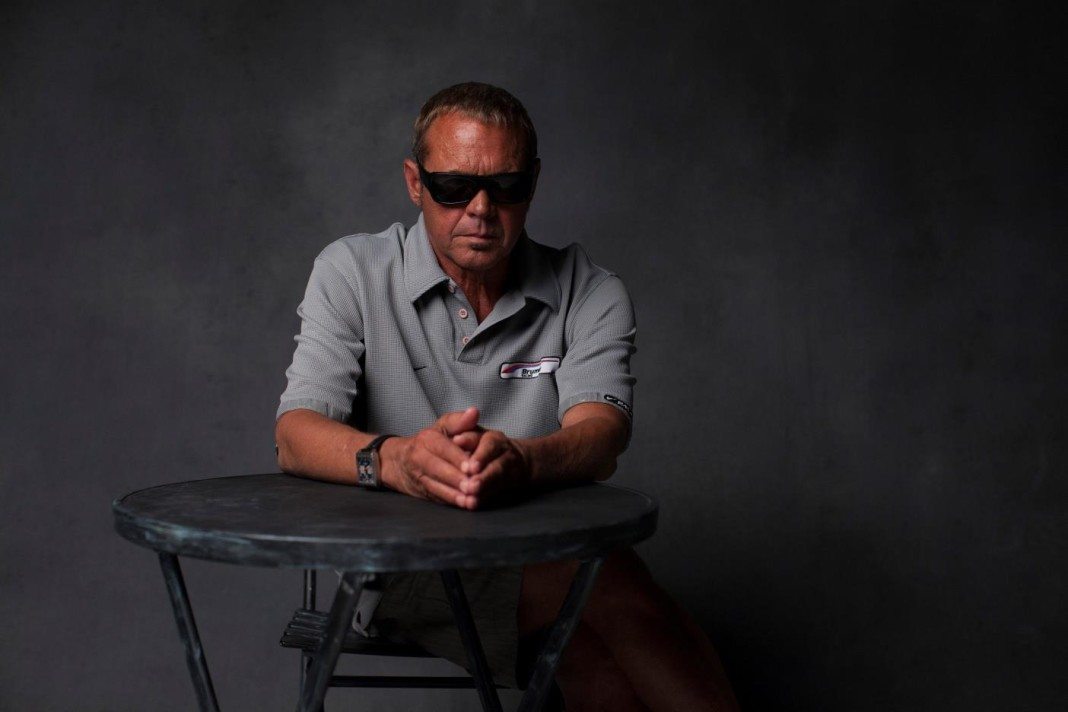 And of course my co-host

Matt Spaiser also chimed in with some thoughts on Daniel Craig and Steve McQueen’s casual style.

“With Steve McQueen its not just the looks its his attitude. McQueen has a certain attitude that comes through on screen and in photos. His attitude really says something about the clothes he is wearing as well.

I think with Daniel Craig when we see him outside of Bond. He’s not interested in being that person. Daniel Craig just doesn’t care at all. You can see that by what he wears on the streets of New York. He wants to be a nobody.”

Listen to the podcast in iTunes, Spotify or in the player below.

Further Reading and where to shop.

I have actually written a more extensive article on Steve McQueen over on Menswear Style. It’s worth a read.

You can read more about the style of Daniel Craig’s Bond over on Matt’s blog, The Suits of James Bond.

You can learn a lot more about Steve McQueen’s style and where to shop for his clothes on John’s site, Iconic Alternatives.

Learn more about the style of Faye Dunaway in The Thomas Crown Affair at Fashion in Film.

Learn more about the Billy Reid coat in Skyfall at James Bond Lifestyle.

Catch a full style break down of The Thomas Crown Affair here.

To contact the Steve McQueen estate you can find more information at Greenlight Rights.