It is a soft material and feels good worn over bare skin. It is a great versatile layering piece, and you can see why it has been used for multiple outfits for the film. 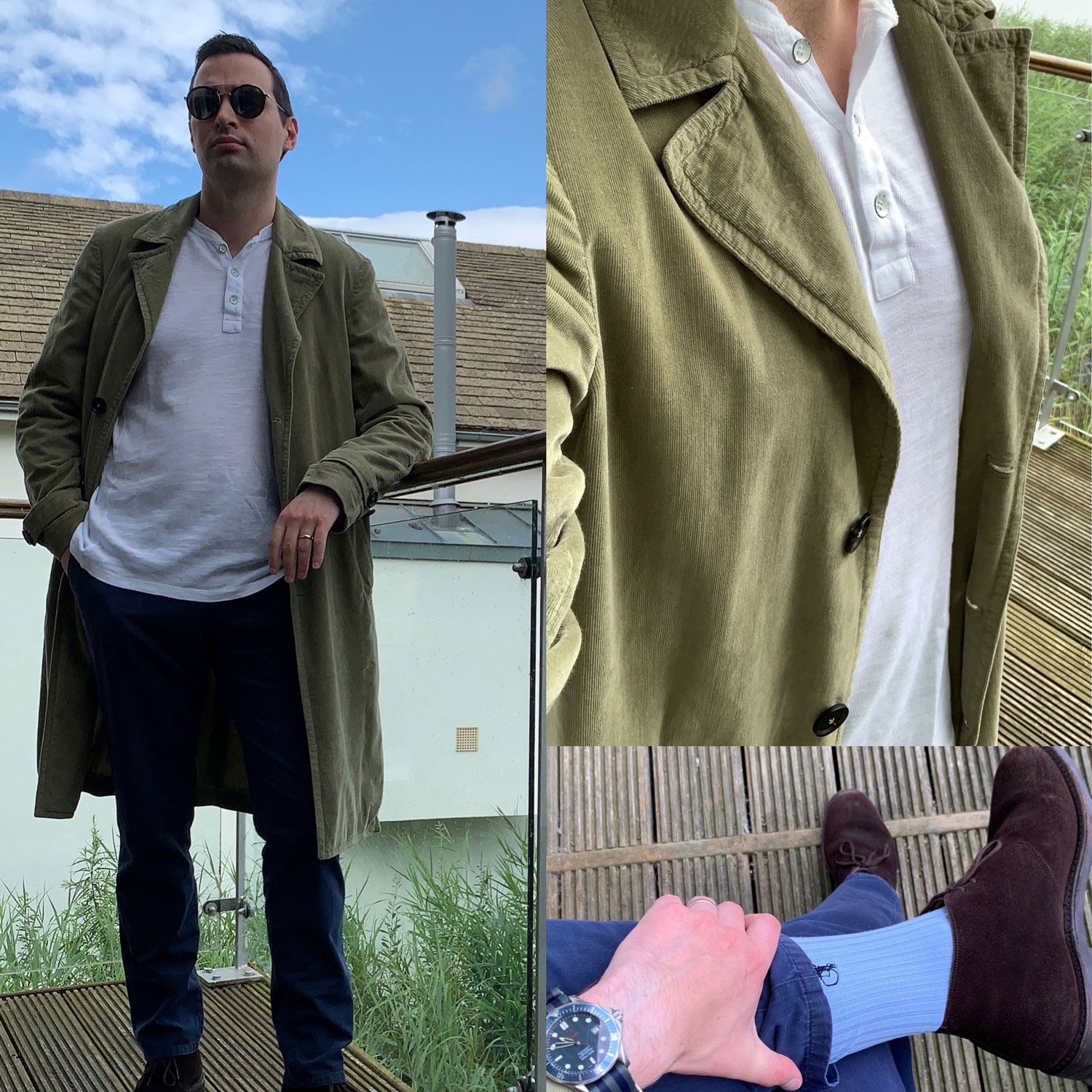 We see this Rag & Bone Classic Henley at least twice that we know of in No Time to Die. Once in Norway with the Massimo Alba Rain 2 Duster coat, the Massimo Alba Mauko trousers and the Crockett & Jones Molton boots. The second is underneath the N. Peal Army Jumper with matching N.Peal combat trousers, both times with the Vuarnet Edge 1613 sunglasses. 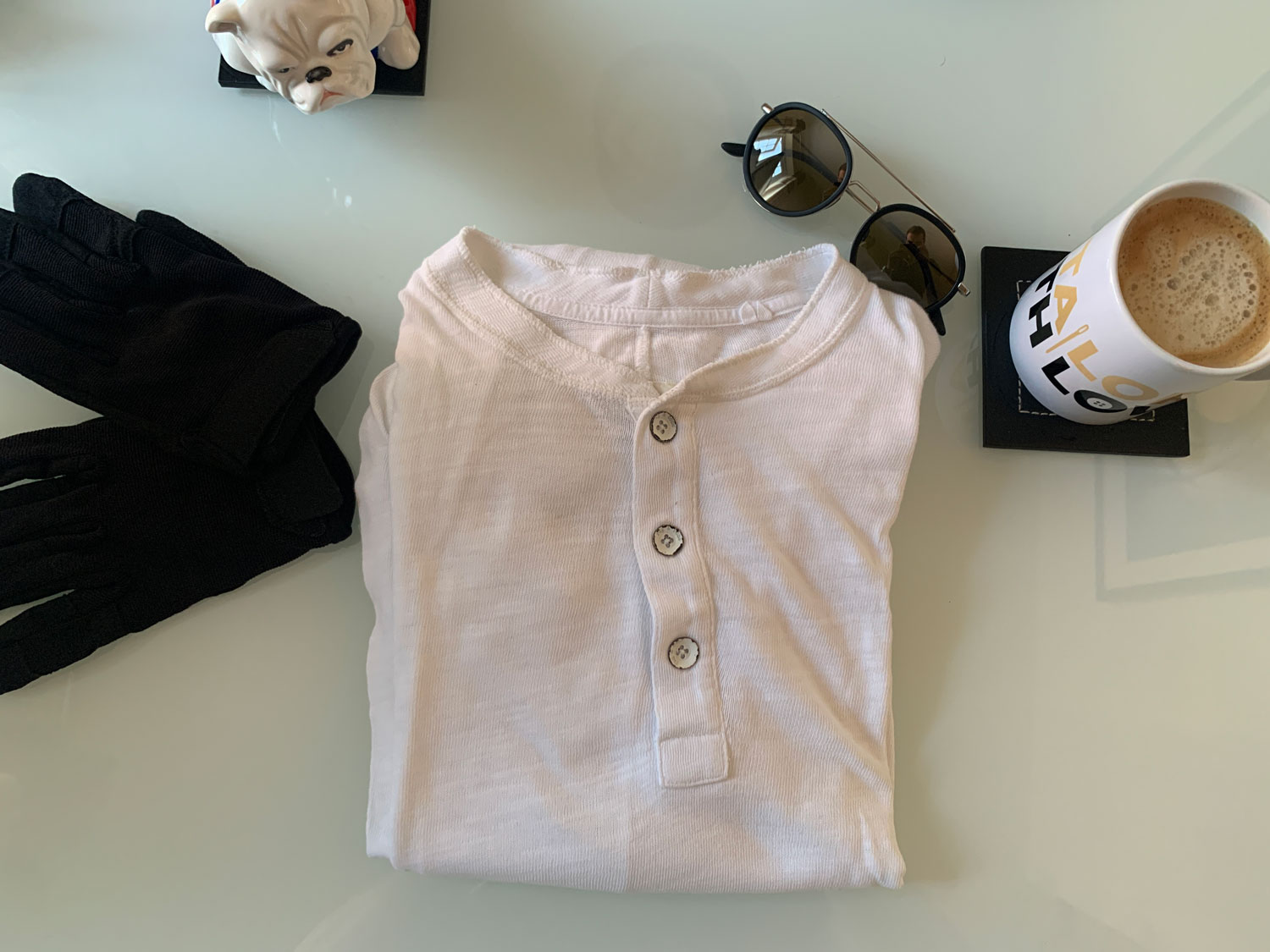 Although Rag & Bone has been a staple of Daniel Craig’s clothing for many years, this is the first time that we see Bond wear them. Although British GQ did report some Rag & Bone jeans being used for Spectre which never materialised in the film. As I had purchased the N. Peal jumper a few months prior and saw this item was going to be used in multiple outfits I thought it would be worth a punt. 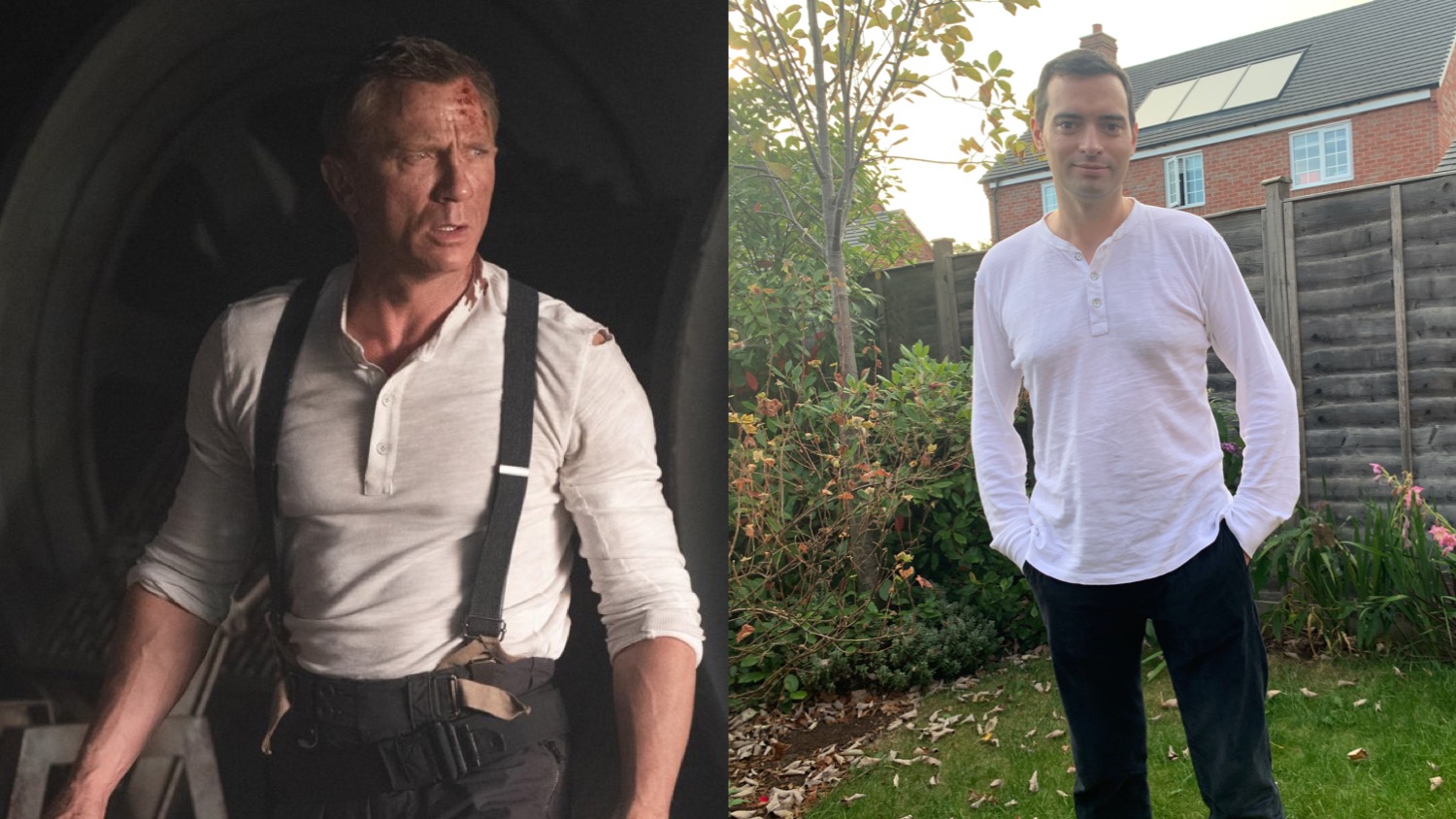 I believe at the time the shirt was advertised at £115 on the website, which means I probably got a 25% discount, but I cannot remember what for? Maybe for first-time purchase? But I also had to pay £16.96 for shipping.

Through Rag & Bone’s website items are sent from the USA. Although there are 3 London stores the Pandemic had just started, so none of these stores would be open. And I wouldn’t have been comfortable traveling to them either.

Learn more about the style of James Bond, including the costumes of No Time To Die, in the book From Tailors With Love: An Evolution of Menswear Through the Bond Films, available on Amazon. 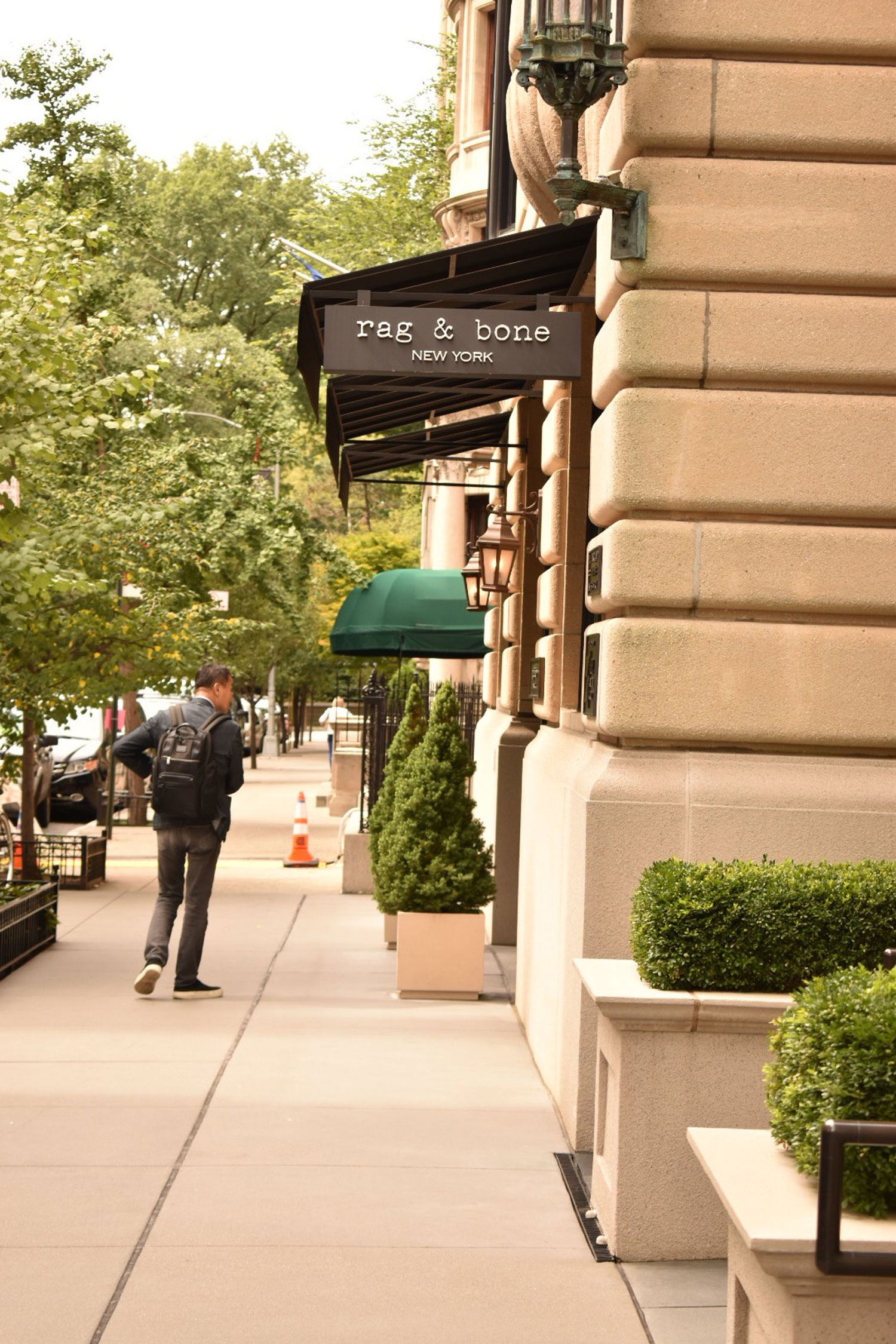 The Henley is made of a 100% slub cotton with Apholos metal buttons. The shirt is a little thicker than the travel t-shirts from Sunspel or Orlebar Brown, but not as thick as a jumper. It is a soft material and feels good worn over bare skin. It is a great versatile layering piece, and you can see why it has been used for multiple outfits for the film. 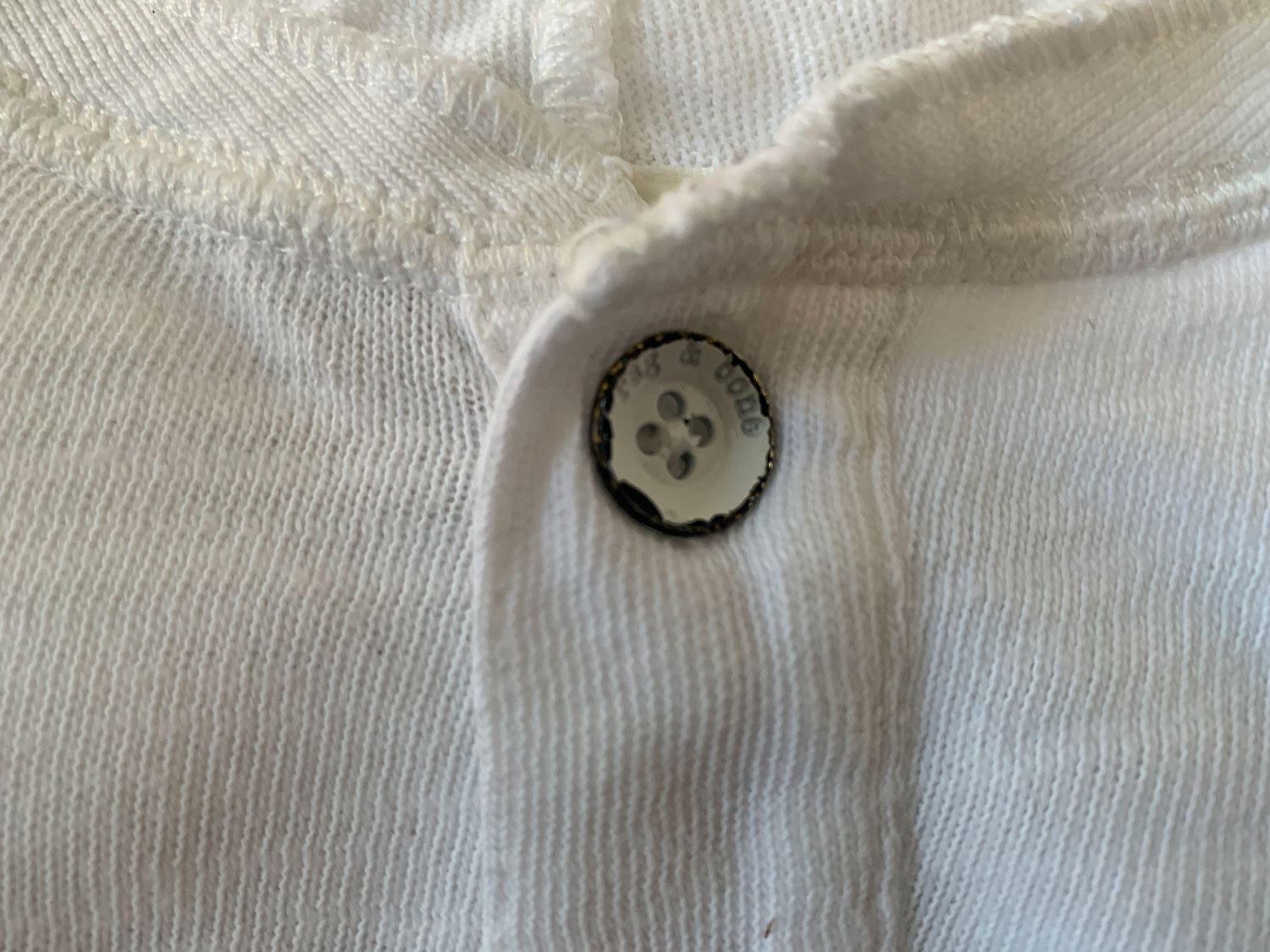 Size wise on paper I should have gone for a medium, but I went for a small. Possibly based on a review that I had watched. When I received the shirt and tried it on, it wasn’t too tight, in fact I thought it fitted me wonderfully.

However, over time, and washing, it has grown. To begin with I thought it would shrink, as most cotton items do the first few times, I thought it would get too tight. But this thing has stretched! Now I’ve followed the care label for washing it, so I know that I’ve done the right thing with cleaning it. I’m not sure why this has happened, or if this has happened to anyone else? It could just be a one off. I still do wear it. I actually really like it, but it has put me off getting another one.

It’s now a little on the baggy side. At the sides it is a little too loose and the arms are a little too long as well, coming down to the joints in my fingers and the cuffs have widened slightly as well. It probably now fits like a medium would. I didn’t noticed for a while, until one day I looked in the mirror and thought I’d lost a ton of weight. 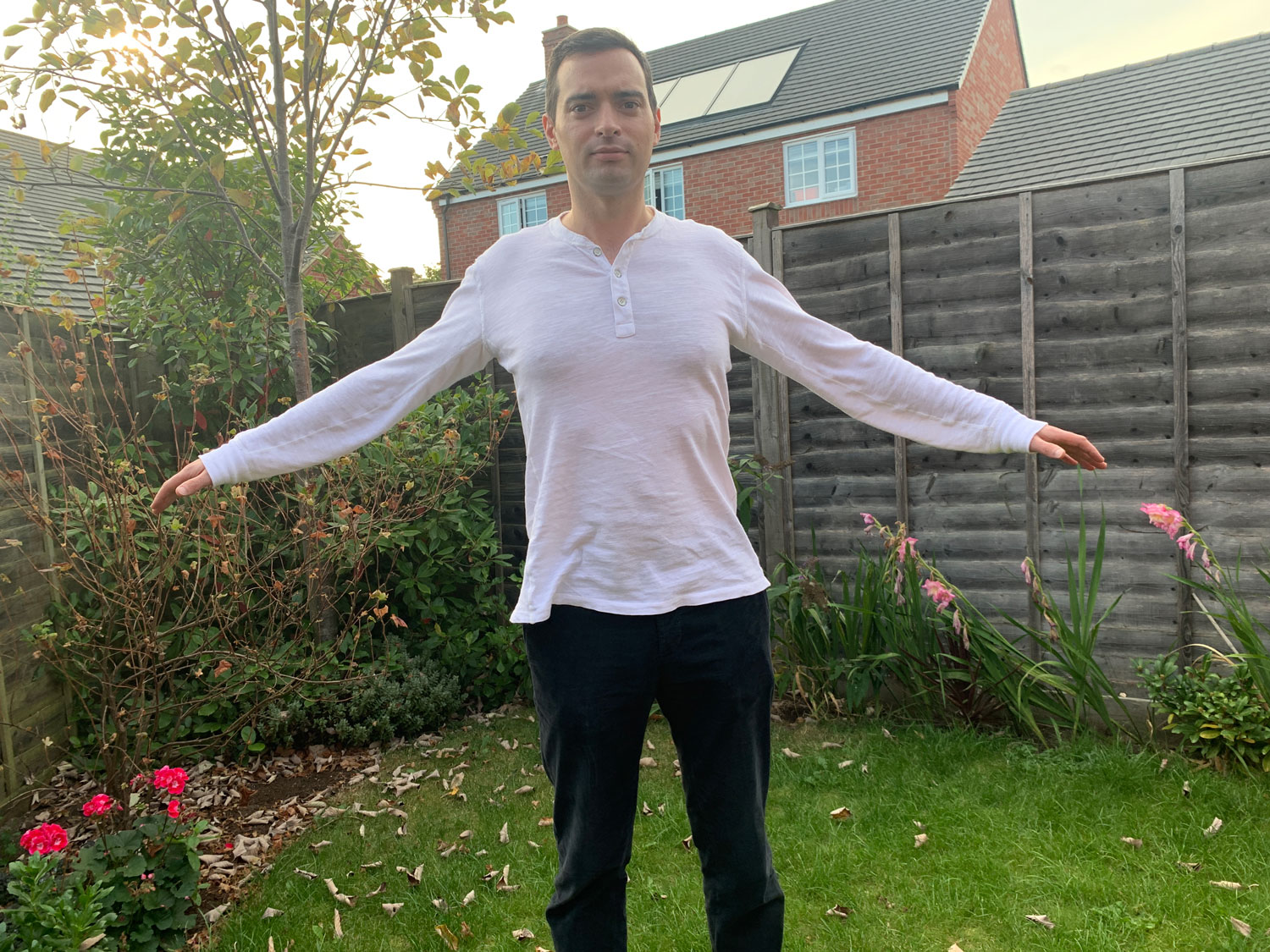 If I did get this again, I’m not sure I’d go for the Small again. If the same thing happened again then the XS maybe preferable as it would stretch out to a size small. But this may not happen, and I’d end up with a shirt that would be too small and too tight to wear.

My intention would be to visit one of the three Rag & Bone stores in London to get a better understanding of the Henley and see if what happened with my Henley was just a one off, or if I should get a smaller size.

I’m a little disappointed that this has happened. If it happened within the first few washes, I would have sent it back. Maybe replaced it. But too much time has passed. I’d have to send it back to the USA, which I perceive could be a hassle. This could be a one off, I don’t know? This is so far the only item I’ve bought from Rag & Bone, and I’m not yet certain if I’d try again? 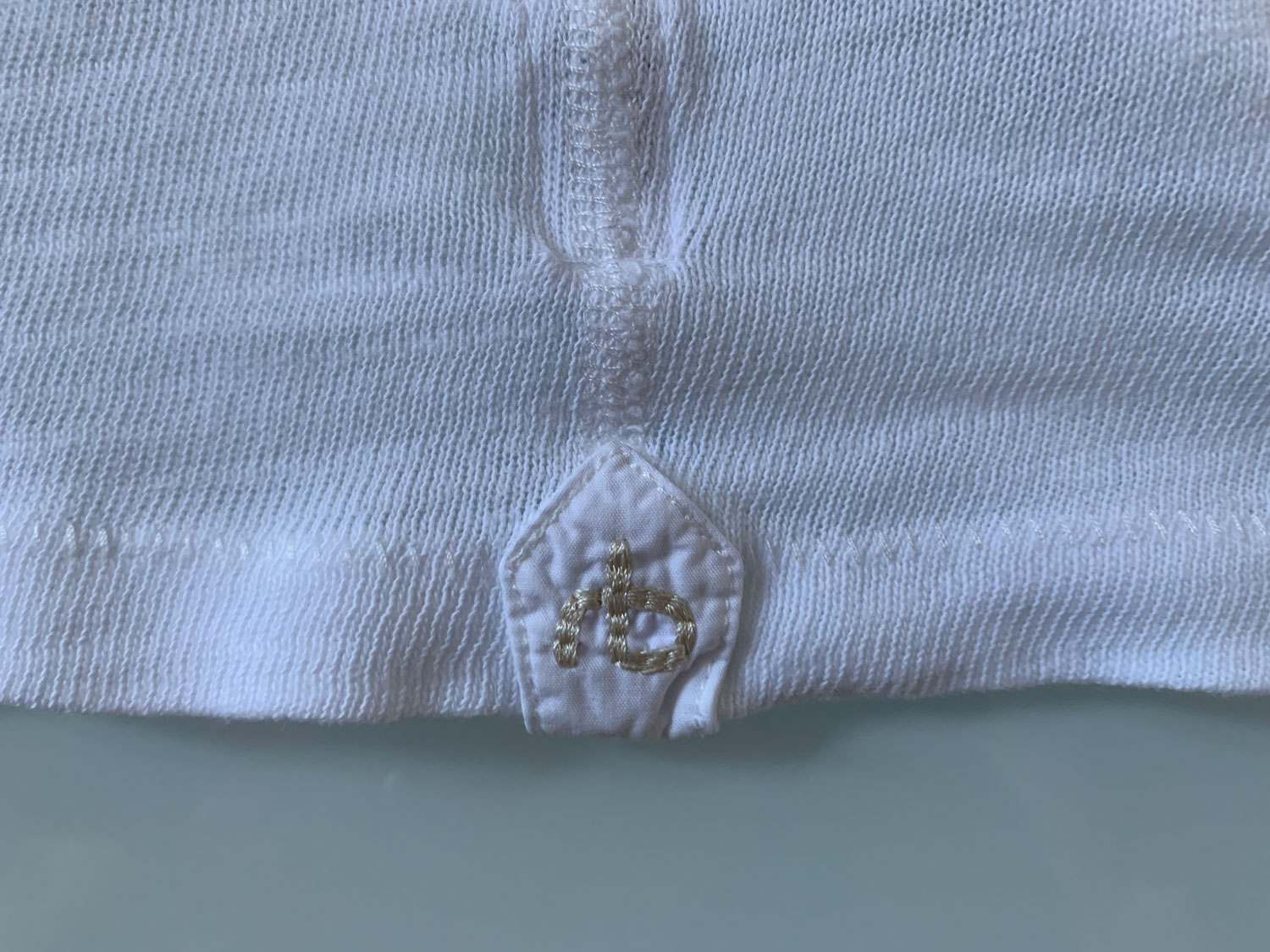 A word from the costume designer

Jane Gooday, who had is the head buyer had a team of two to three other buyers with her, and a coordinator in that department constantly. Jane, and I would have weekly, semi daily check ins about upcoming characters. And I would give her my mood boards of my fabric ideas and character ideas and send her off with maybe some pictures of particular things I’ve seen. She then comes back to me with suggestions.

She and her team are dispatched in the streets of London or on the internet or on the phone with Italy or Japan or whatever designers we’re interested in and getting bringing those clothes, into a room. We then begin the whole operation of unpacking and checking in clothes so that they can get returned. When an actor walks into a fitting room, you want it to look like a boutique. They’re setting up basically a whole department store worth of they’re the shoes, they’re the braces, they’re the cufflinks, etc. Everything is set up.

And that’s just for one look. If somebody has 14 looks, you can imagine how many times that happens and how many options I do a sort of pre select before things come in and some of the stuff is obviously being made. I’d say it’s 50/50 on this job made from scratch and stuff that we modified from real life purchases. Or flat out just things that are exactly the right answer that already existed.

The Henley is currently sold out on the Rag & Bone website at the time of writing this. Resources: James Bond Lifestyle; Rag & Bone. Be sure to check out more reviews by Daniel Gaster. Follow Daniel on Instagram.