… they’re not cheap. However, compared to a price of a TOM FORD… 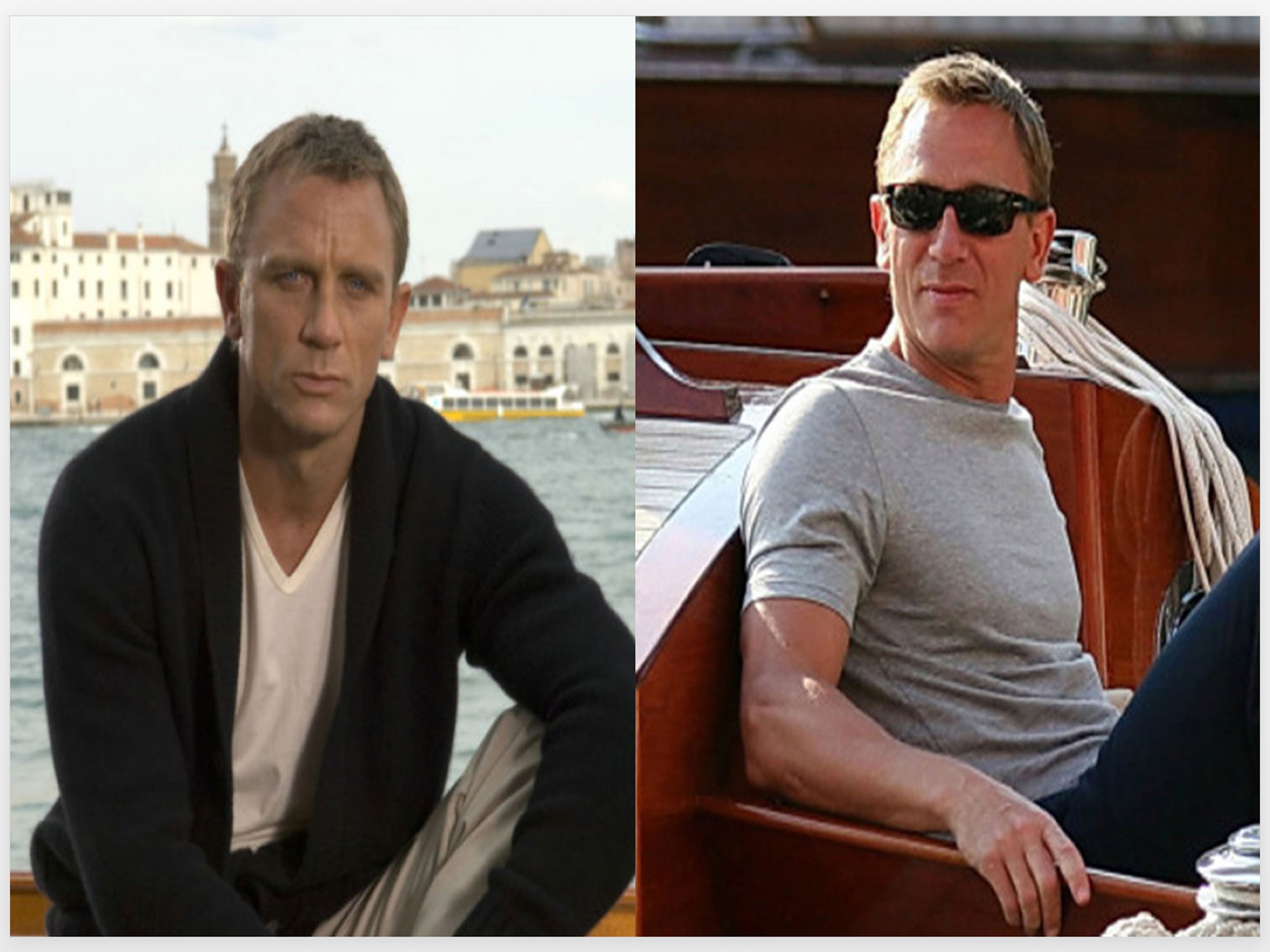 Originally designed for Daniel Craig as James Bond in Casino Royale. Sunspel is the first clothing brand that I ever bought Bond related items from. We first see the Grey Melange Crew Neck T-Shirt when Bond travels to Miami, wearing with a brown Amani Leather jacket and Ted Baker linen trousers. The next time we see him wearing it he is arriving in Venice on the Sprit yacht, with the Persol PO 2720S and some navy chinos.

Then later, again in Venice, under the rugby long sleeve polo and navy chinos. (There is a grey T-Shirt Bond wears in Madagascar underneath his floral shirt. Although this not believed to be Sunspel but from Diesel instead.) The White V-Neck is seen only towards the end of Casino Royale, when Bond is talking to M on the phone regarding Vesper and Mathis on board the Sprit yacht.  He wears this with a black shawl cardigan and beige trousers. 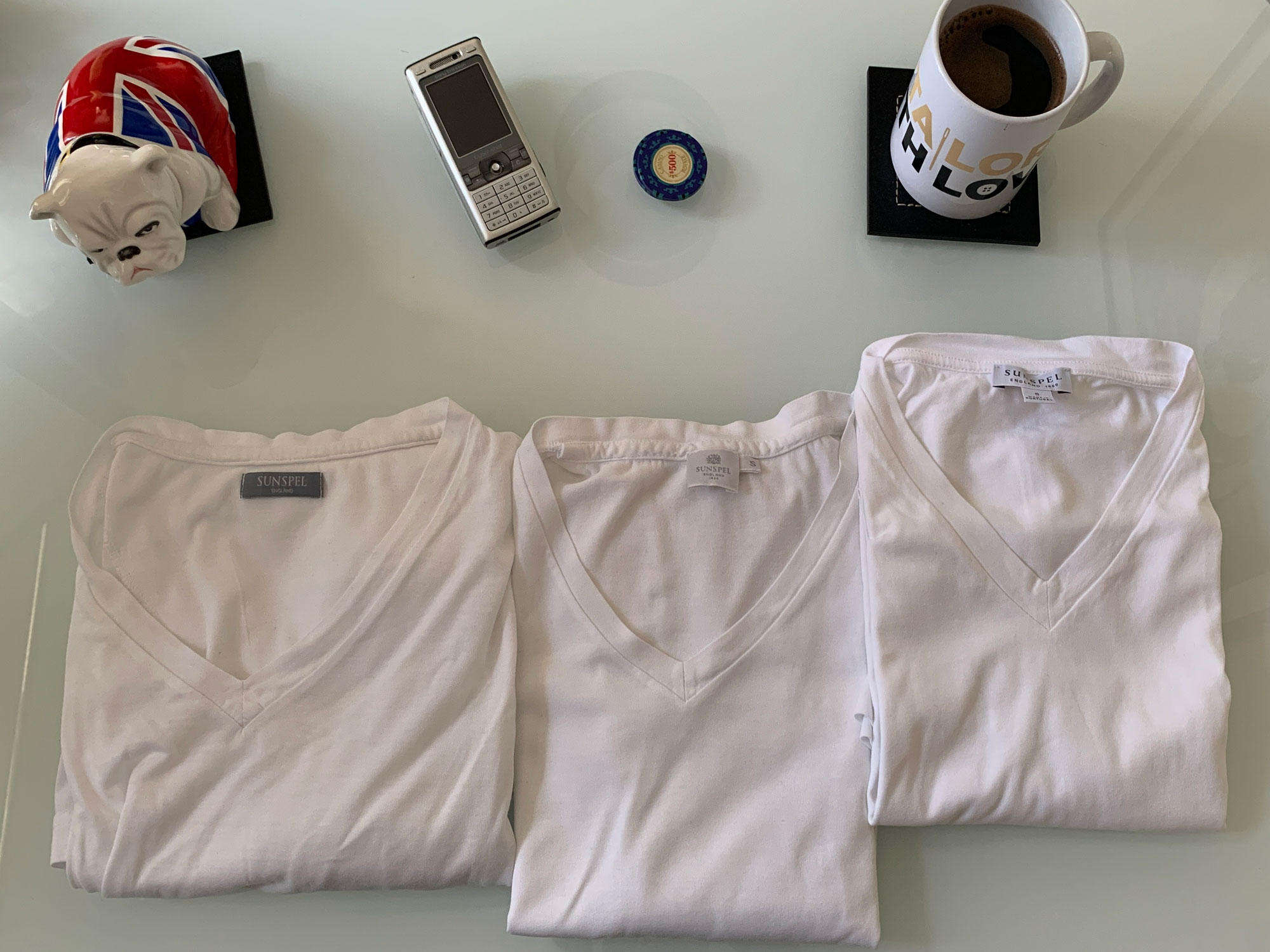 As with most of my Bond purchases, I ordered online. Living in Leicester at the time, meant that I had no stores nearby that sold Sunspel. Therefore I ordered online, with the hope that these would be suitable. Originally, I went with a medium, but after getting in better shape I went down a size to a small. Since 2014, I’ve purchased other T-Shirts from Sunspel in different styles and colours (all in a small) and have been extremely happy with them.

The quality and the feel were unlike anything I’d tried on before.

This newly designed T-Shirt was a slimmer fit to their standard T-Shirt and slightly heavier. Although at this point in time, I wouldn’t have known that, having not made any previous T-Shirt purchases with Sunspel. The look of the T-Shirts looked so much better than any I had worn previously. Maybe with the slimmer, more tailored fit it complemented me a lot more than the T-Shirts I had bought in the past. 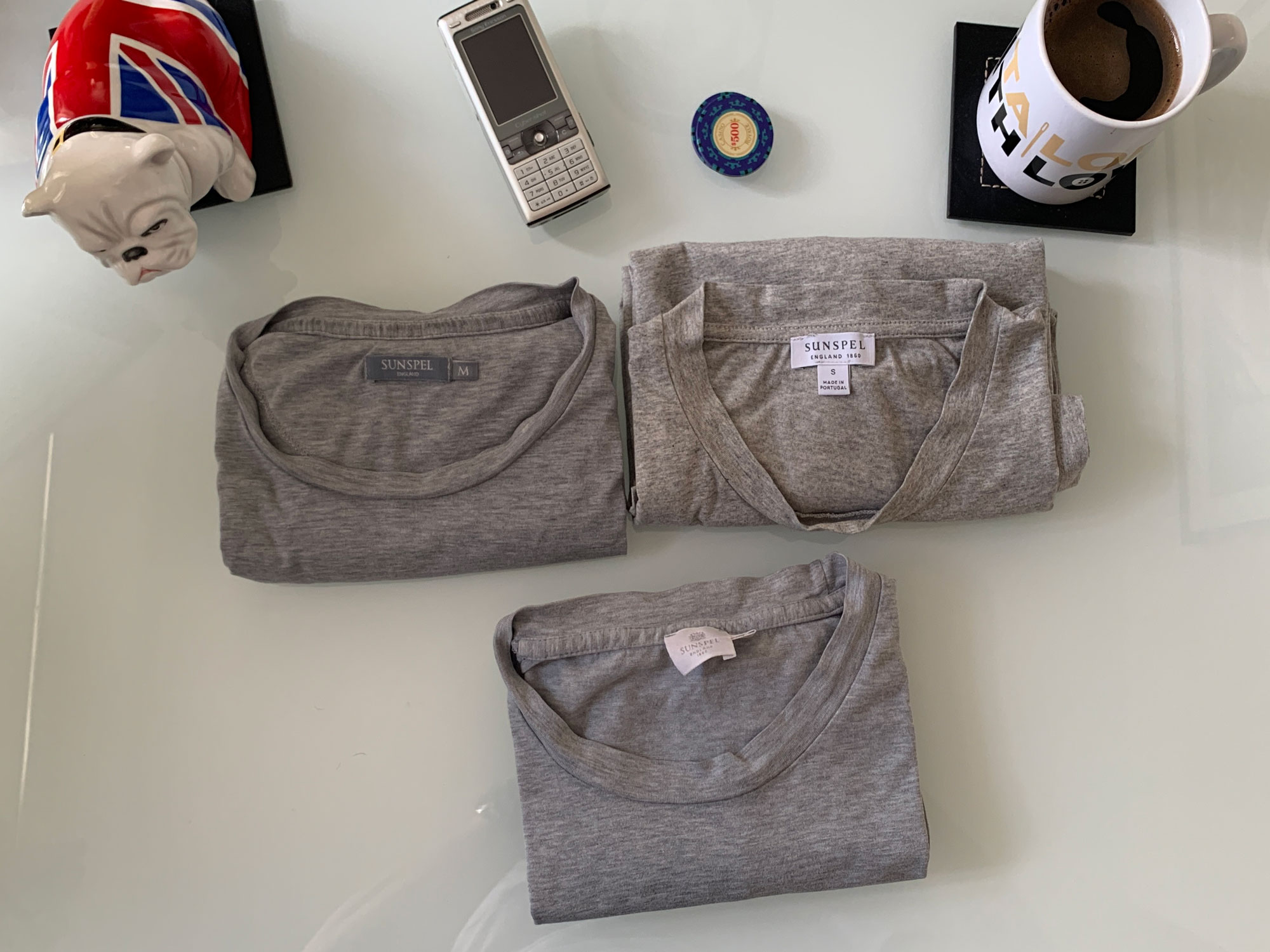 Casino Royale is probably the most casual you’ll ever see James Bond. But just because he’s more casual doesn’t mean he’s not smart. These T-shirts show that. Bond uses colours which can easily be used for everything that he has taken with him. Although I’m not one really to do this, I can see these fitted T-Shirts being worn with a suit. I tend to wear them with everything else.  Jumpers, cardigans, chinos, trousers, jackets, shirts, shorts, shoes and trainers.

Unlike the Polo shirts from TOM FORD seen in Quantum of Solace and Spectre, which came and went within a season or two, the Riviera collection has been more or less available for the entire time. The other big difference is the price. These T-Shirts are £70 each. Not cheap. However, compared to the price of a TOM FORD alternative (where you are looking at a 3-digit number instead of 2, and the first digit probably isn’t a 1, more likely a 2, possibly a 3) these are more reasonable. 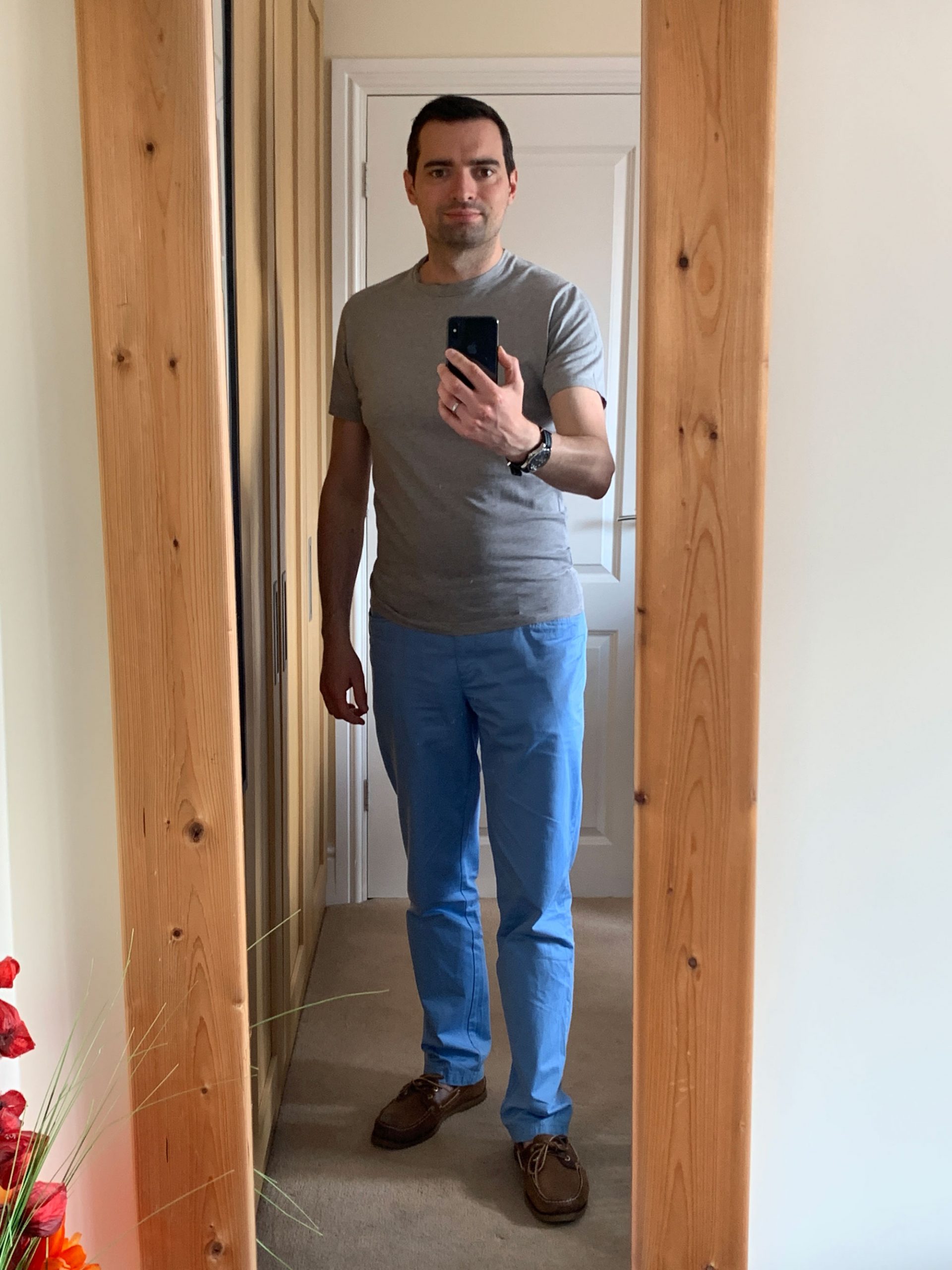 There have been some tweaks along the way, which I remember reading about, but wouldn’t be able to tell you what they were. My earlier Riviera T-Shirts (and polos) were made in England, from the Long Eaton factory, now they are made in Portugal.

When I went to take the photos of my grey melange T-Shirts together, I did notice a slight difference in the colour of the new organic cotton version. It does look slightly lighter than then previous two that I had, however I put it down to the difference material. I didn’t notice any difference until I put them side by side, but I felt I should let you know, should you wish to make the purchase. 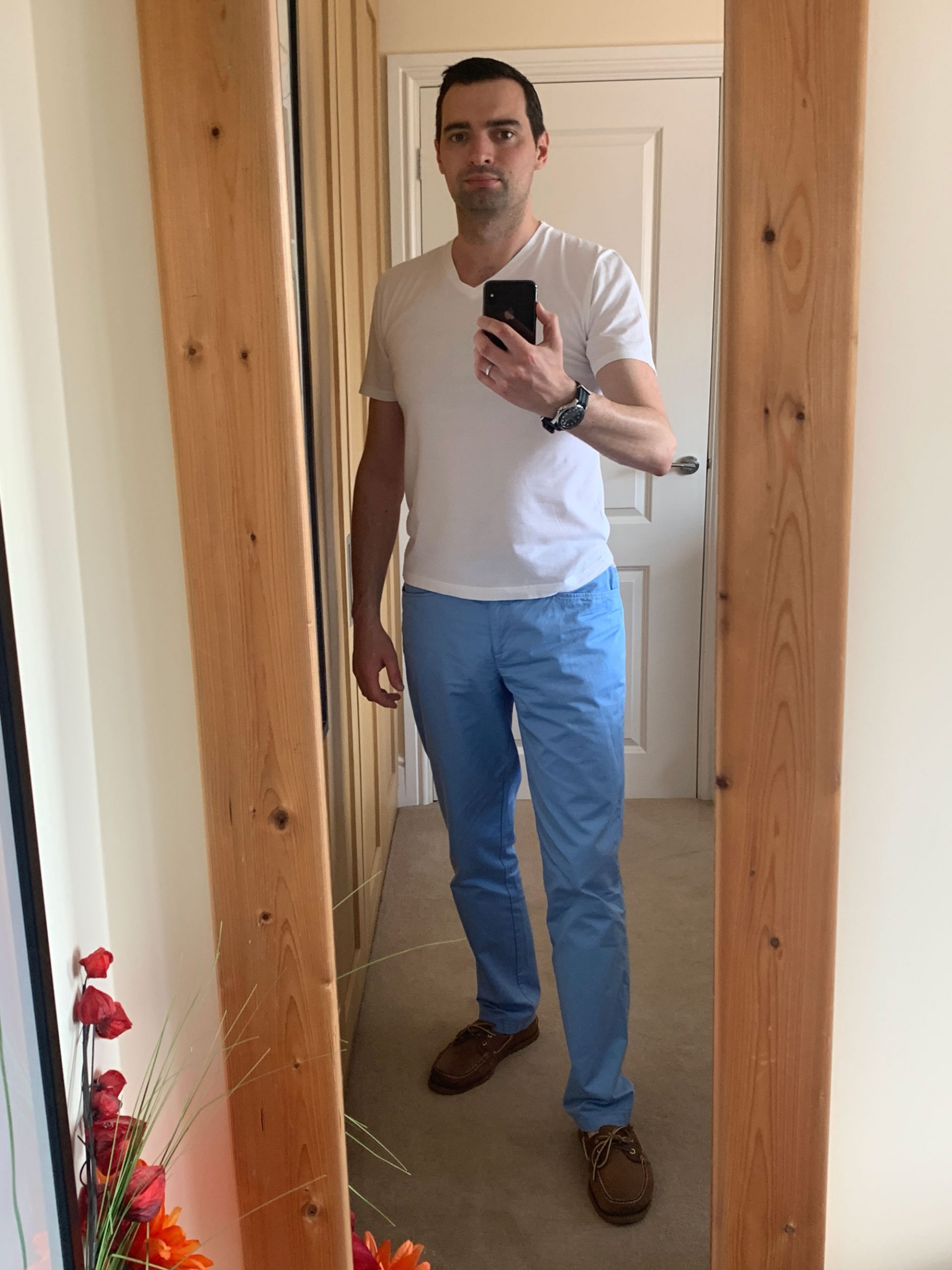 I’ve had the small T-Shirts for the last 7 years, and I’ve kept the medium T-Shirts which are about 10 years old now. I’m still happy to wear the older medium T-Shirts as they have held up very well and lasting 10 years is great sustainability.

Although not as fitted, they still fit well, and have survived!

I tend to wear the mediums under things, rather than just on their own. They still feel comfortable, luxurious and still intact! In the last years I’ve worn T-Shirts (and polos) more than I’ve worn a shirt, wearing them a lot more often the course of this year. So, the fact these have lasted well is a reason Sunspel continue to get my custom. 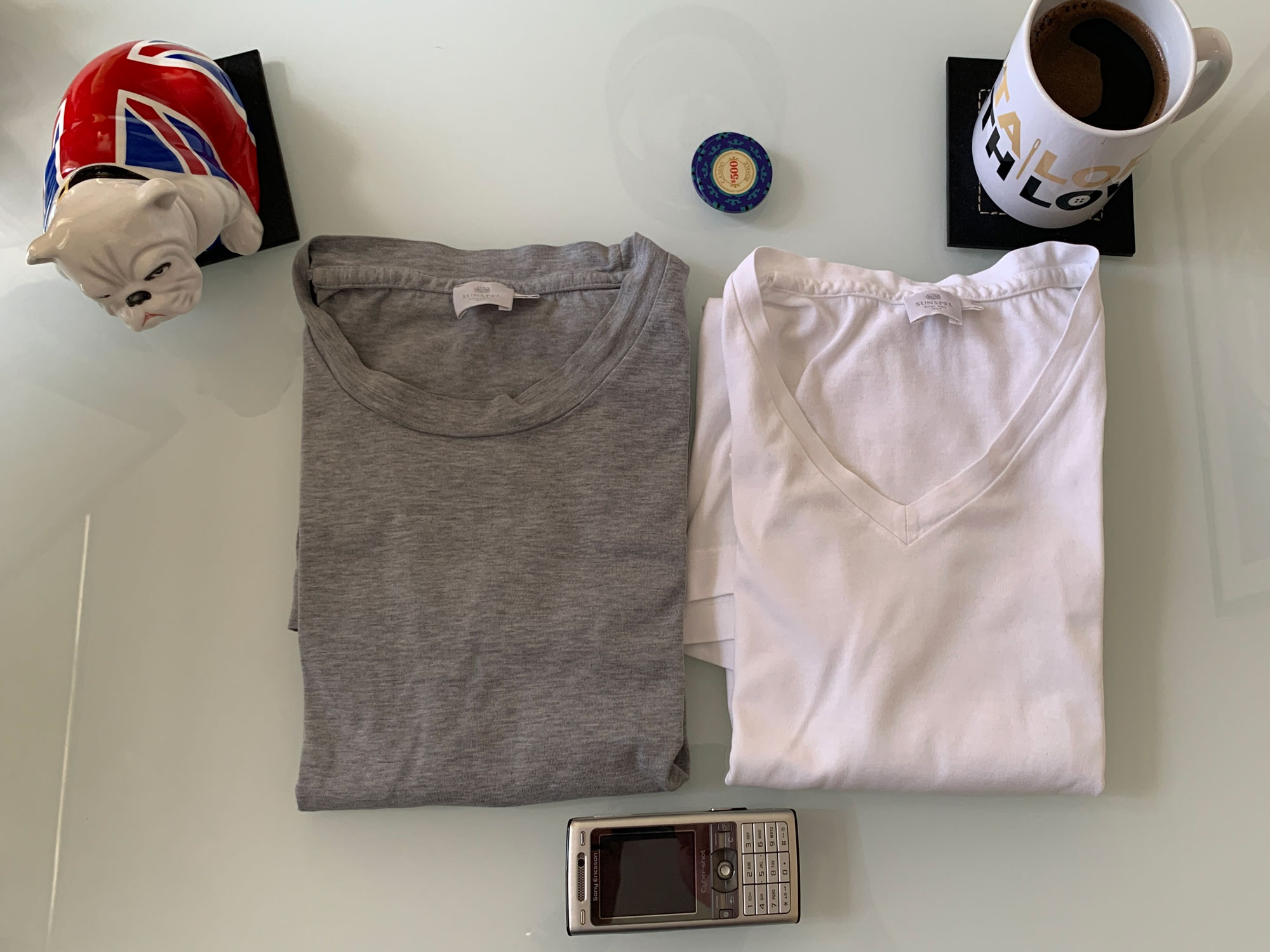 An offer you can’t refuse

I do tend to wait for an offer, or a sale before I get something else to add to my T-Shirt or polo draw. They come up frequently enough that I haven’t tended to pay full price for an item for a while. When you sign up to an account, you usually get an initial first order discount. At least that was true when I signed up. But you also get email notifications of sales or discounts, usually ahead of Facebook.

I usually keep a wish list of items I’ve selected when looking for full price items, so that when sales are on, I’m not having to troll around the sales pages looking for what I want and in my size.  I can just look at my list and see if anything I’ve pre-selected has gone in. However, Sunspel don’t offer this, which is a shame. But in all honesty it’s not a really a draw back from searching for a bargain. 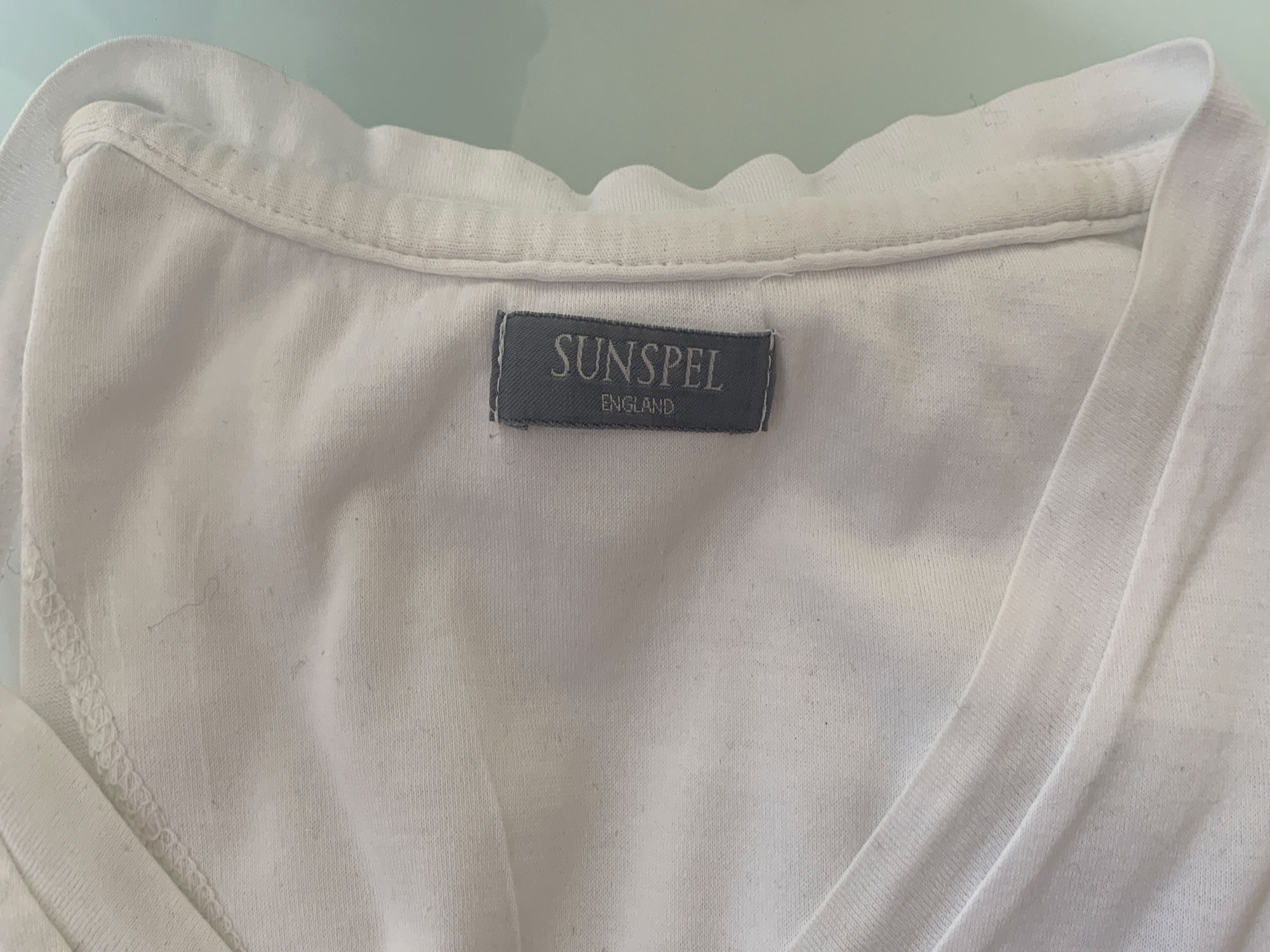 Photos of Daniel Craig as James Bond taken from Thunderballs the unofficial James Bond picture archive. Used here under the fair use doctrine. Be sure to check out more reviews by Daniel Gaster. Follow Daniel on Instagram.