If there is only one tie to take away with you then a navy tie is the answer, and you cannot go wrong with a grenadine navy tie. 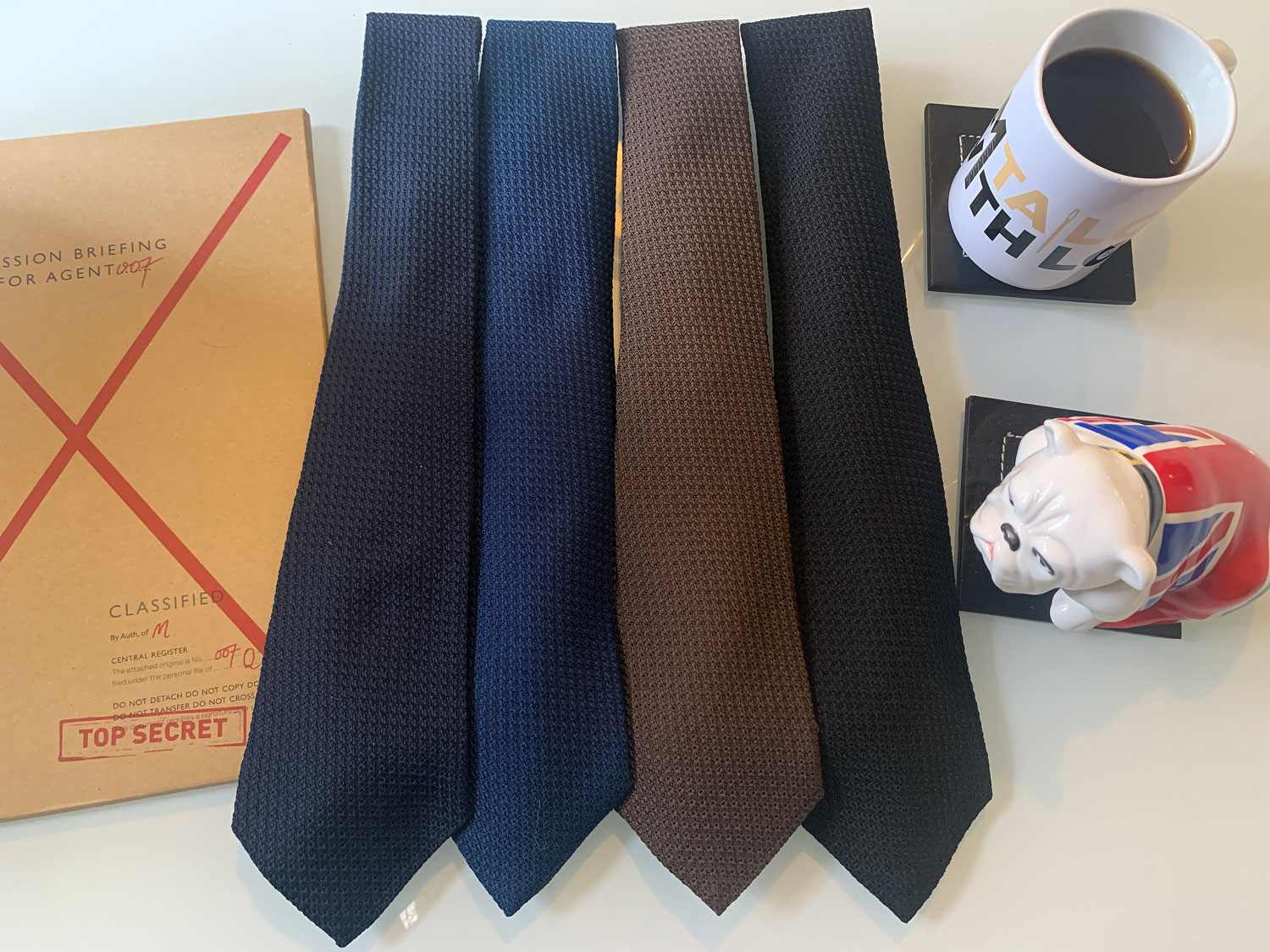 The Navy Grenadine tie is the only tie he wears (barring a bow tie) in Dr No. In From Russia with Love a lighter dark blue tie is added. In Goldfinger Bond is only wearing Knitted ties, but there is more than one colour option. For Thunderball he has returned with the Grenadine ties, and more than just the Navy, adding a Black and a Brown into the mix. 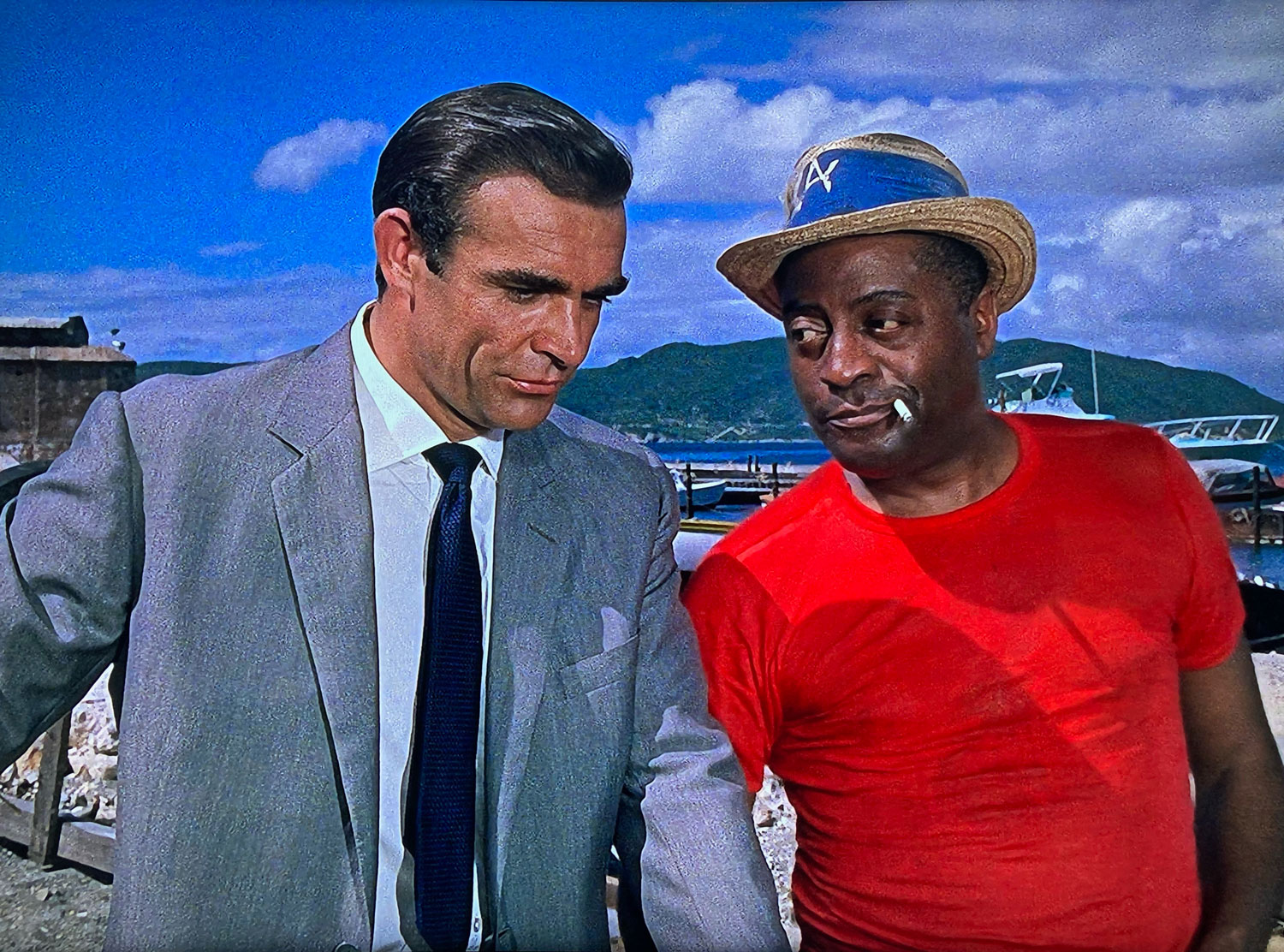 For Connery’s final outing as Bond the grenadine ties are wider, and there is a new colour to add to the Grenadine collection, a dark grey, or as Matt Spaiser from Bond Suits calls it an, ‘amethyst-coloured grenadine tie‘.

Read our interview with Retail Manager James Cook and T&A’s relationship with James Bond in the book From Tailors With Love: An Evolution of Menswear Through the Bond Films, available on Amazon. 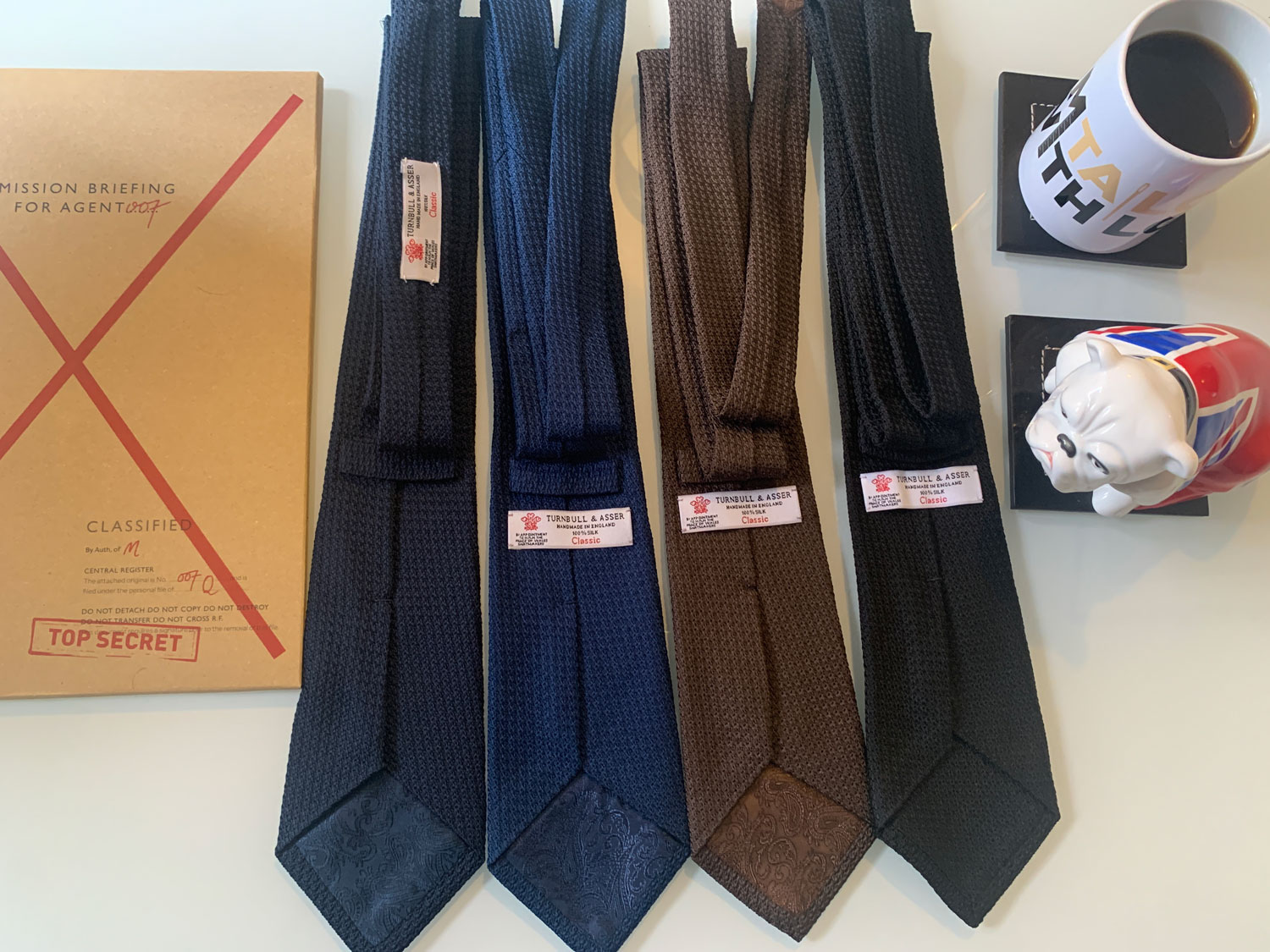 My first purchase with Turnbull & Asser was a navy-blue grenadine tie which I bought from the Jermyn Street store on a visit to London many years ago. I noted that I purchased it for £95 but I cannot really remember when I bought it.

The grenadine tie was wrapped in a navy-blue box with a paisley pattern to it, and then placed in a slim tie bag which had the same decoration to it. Even though these ties are wider than the one Connery wore between Dr No and You Only Live Twice, it instantly gave me that subtle Bond feeling. 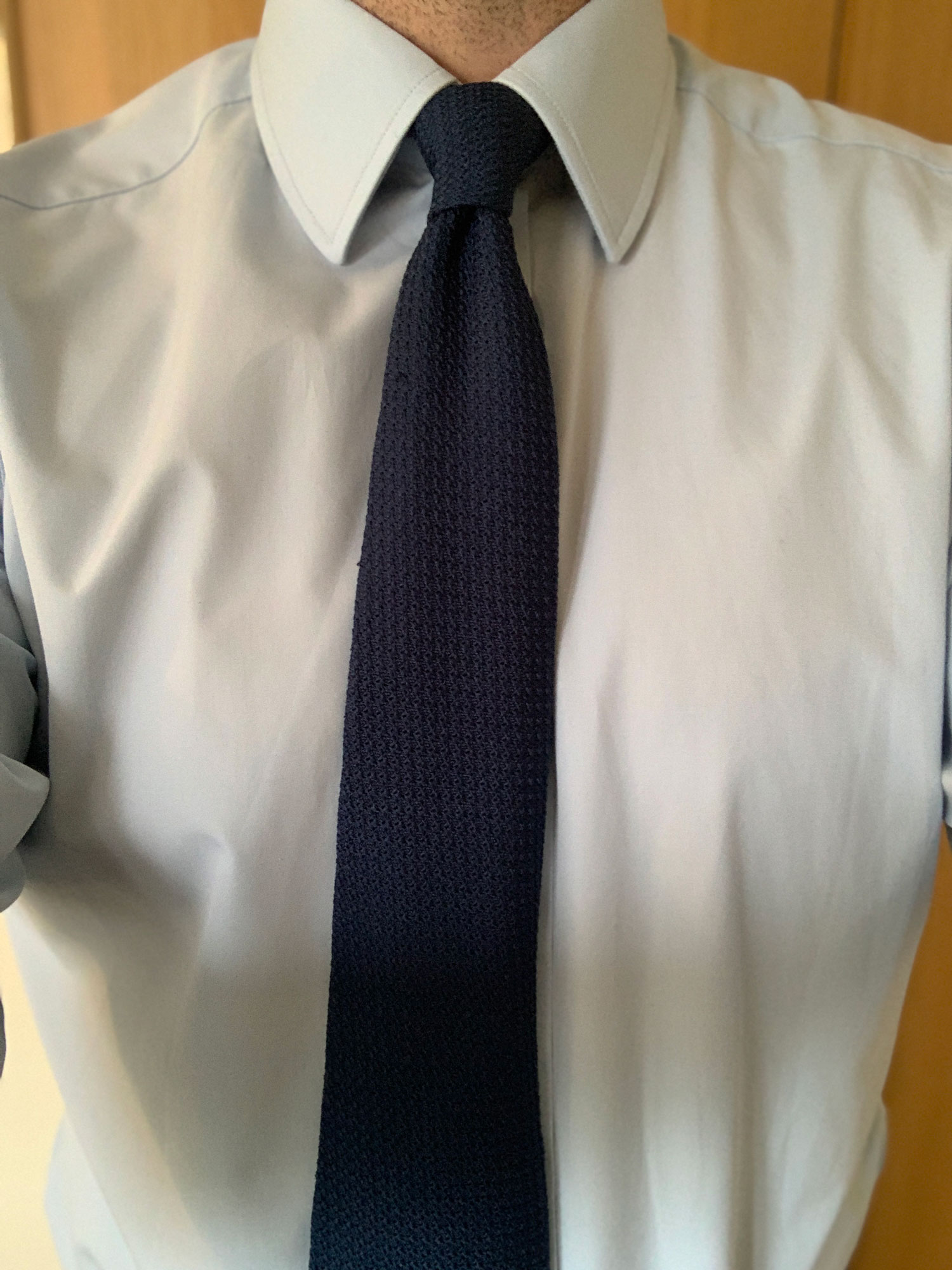 The tie does up beautifully, I only ever really tie a four in hand knot into my ties, and this is no exception. My shirts don’t have a widespread collar that needs filling, and a four in hand is enough. Although I usually try and add a dimple to the tie when completing the knot. Being navy, it goes with everything; dark suits, light suits, striped or even checked, which Connery showed throughout his tenure.

If there is only one tie to take away with you then a navy tie is the answer. You cannot go wrong with a grenadine navy tie.

When I remove and hang up the tie, there is little sign of creasing caused by the knot, and if there is it has fallen out by the time you go to use it again. There are a few stray threads, but nothing that I am worried about, and they are hardly noticeable. With this pattern it was bound to happen at some point. 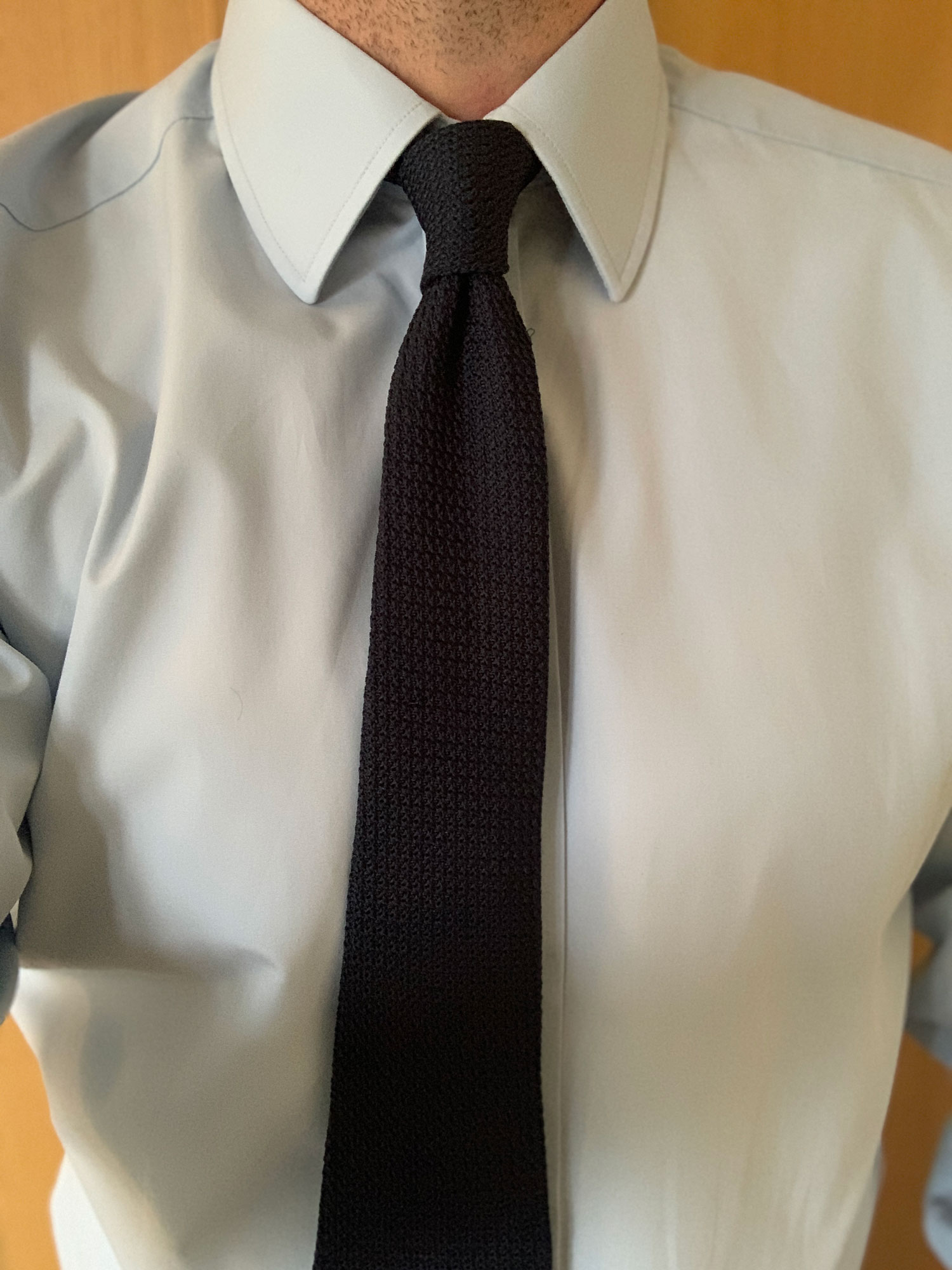 Over the years I’ve added more Turnbull & Asser grenadine ties to my collection. The Bond colours of a brown, a midnight blue and a black. I also have a burgundy and a silver, which aren’t colours Connery wore, but colours that I think would have been suitable for Connery’s Bond. Over the years the packaging has also changed, from the blue paisley to a basic white coloured box, to now more environmentally friendly, completely recyclable packaging.

The only colour that I’m missing from the Bond line up is the dark grey. Last year I did see a ‘Slate’ grenadine tie, which I thought, colour wise was almost correct.

However, the grenadine pattern has changed, and is a lot smaller to the grenadine of my ties. I did want to go into store and see how much of a difference this would make. Then the pandemic struck, so I’ve not been to London since. Looking online today the Slate tie has gone, it may come back when restocked, or went in a sale that I missed. 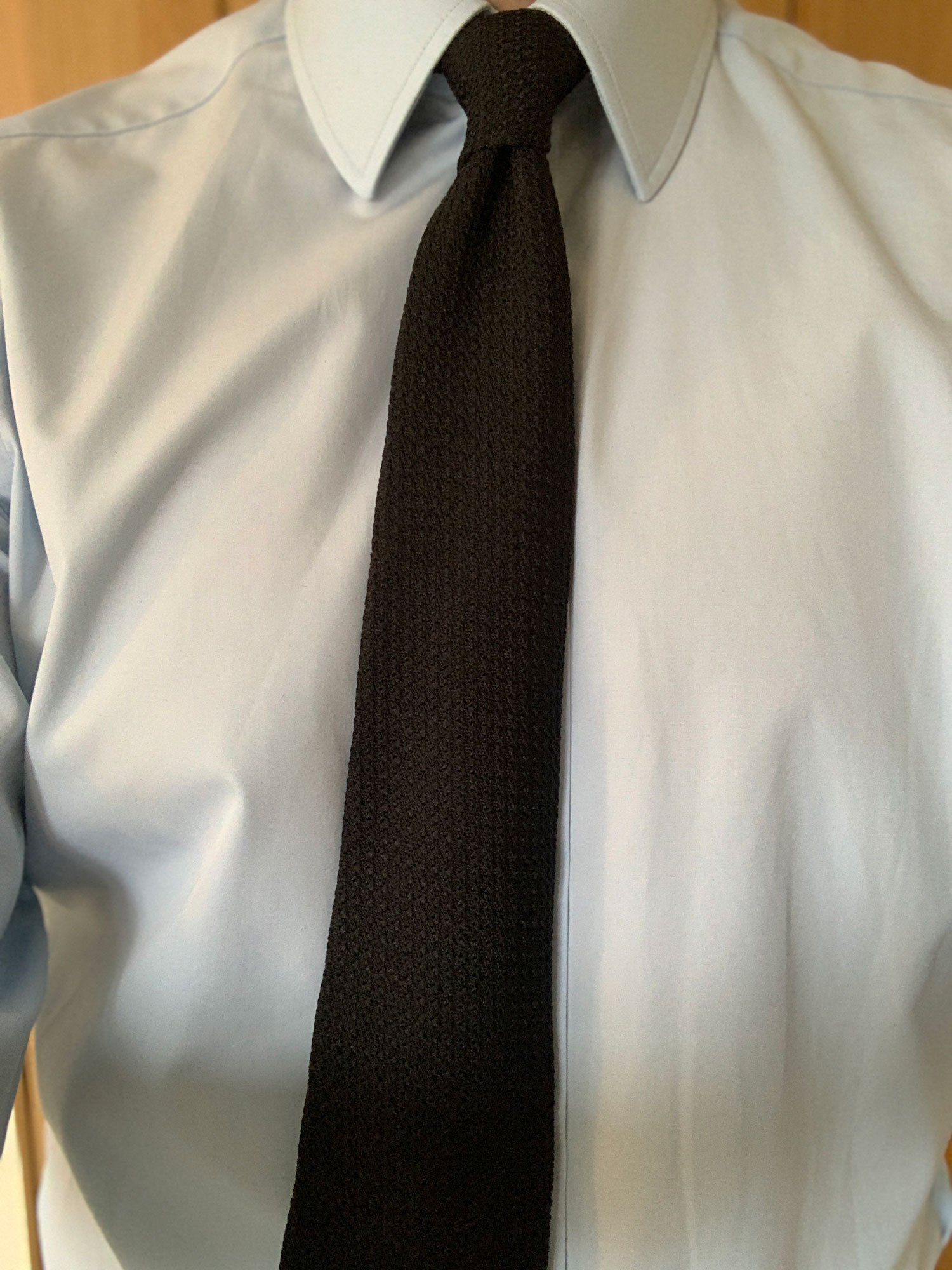 Although I’ve not gone down this route for ties yet, when I visited the Bury Street side of the Turnbull & Asser main store to take the plunge on some bespoke shirts, I noticed a book of swatches for grenadine ties.

They said I could have ties made to whatever width I would like. I’m not sure if the grenadine patterns have changed, but it is something to be aware of. If you would like the Connery era ties, it is something you might want to consider. Although I’m unsure if there is a minimum number you’d have to order. For Turnbull & Asser bespoke shirts there is a minimum order of 4 for your first order.

Overall, I really am happy with all my Turnbull & Asser grenadine ties.  They look fantastic, feel amazing to tie and generally works with most suit combinations. They are defiantly a worthwhile investment for anyone who likes a tie with their suited attire. 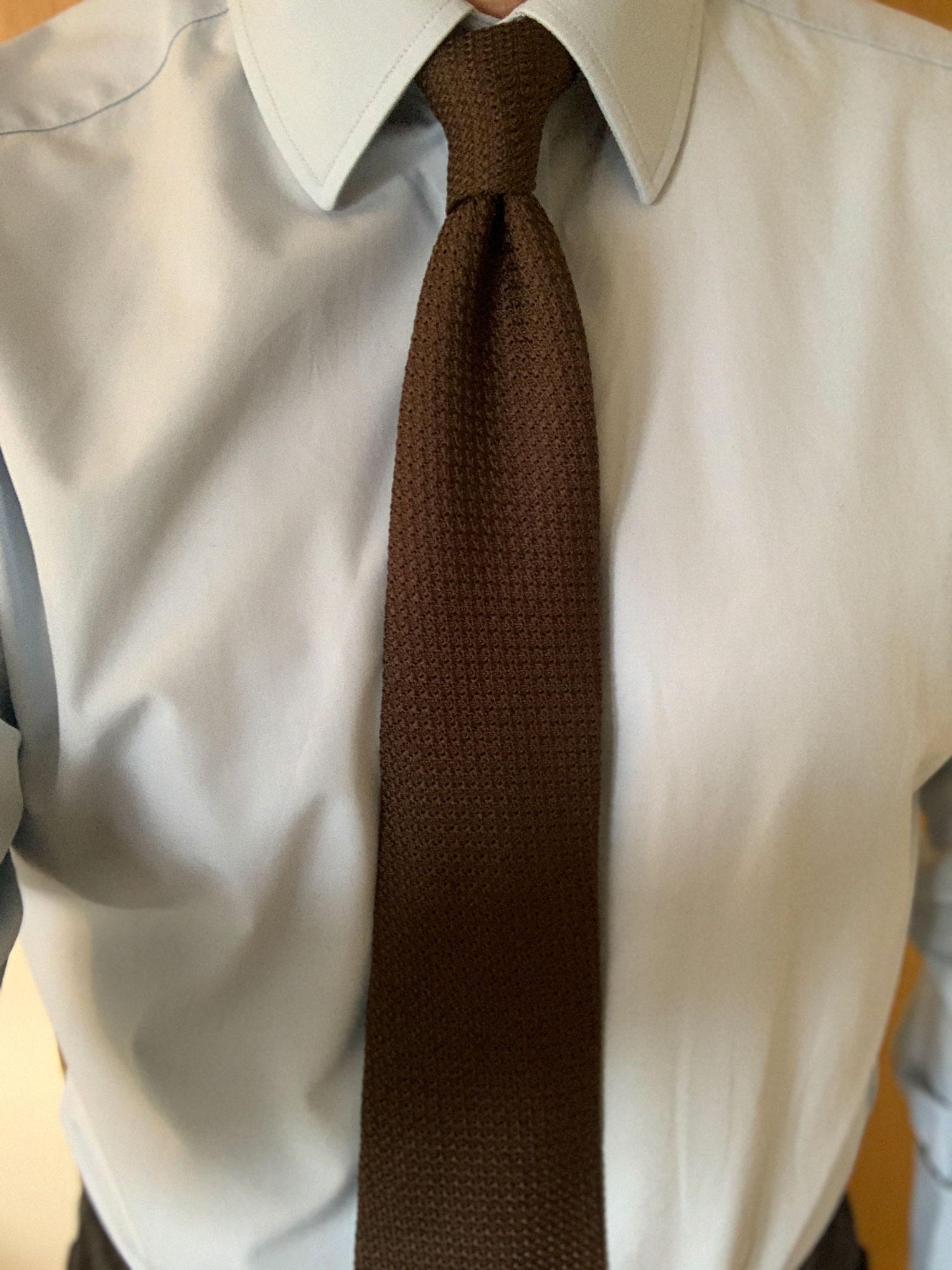