There is a 007 desk which sits alongside a side picture of Daniel Craig and framed ties from the three films featuring Turnbull & Asser ties.

– article by Tie Another Day. 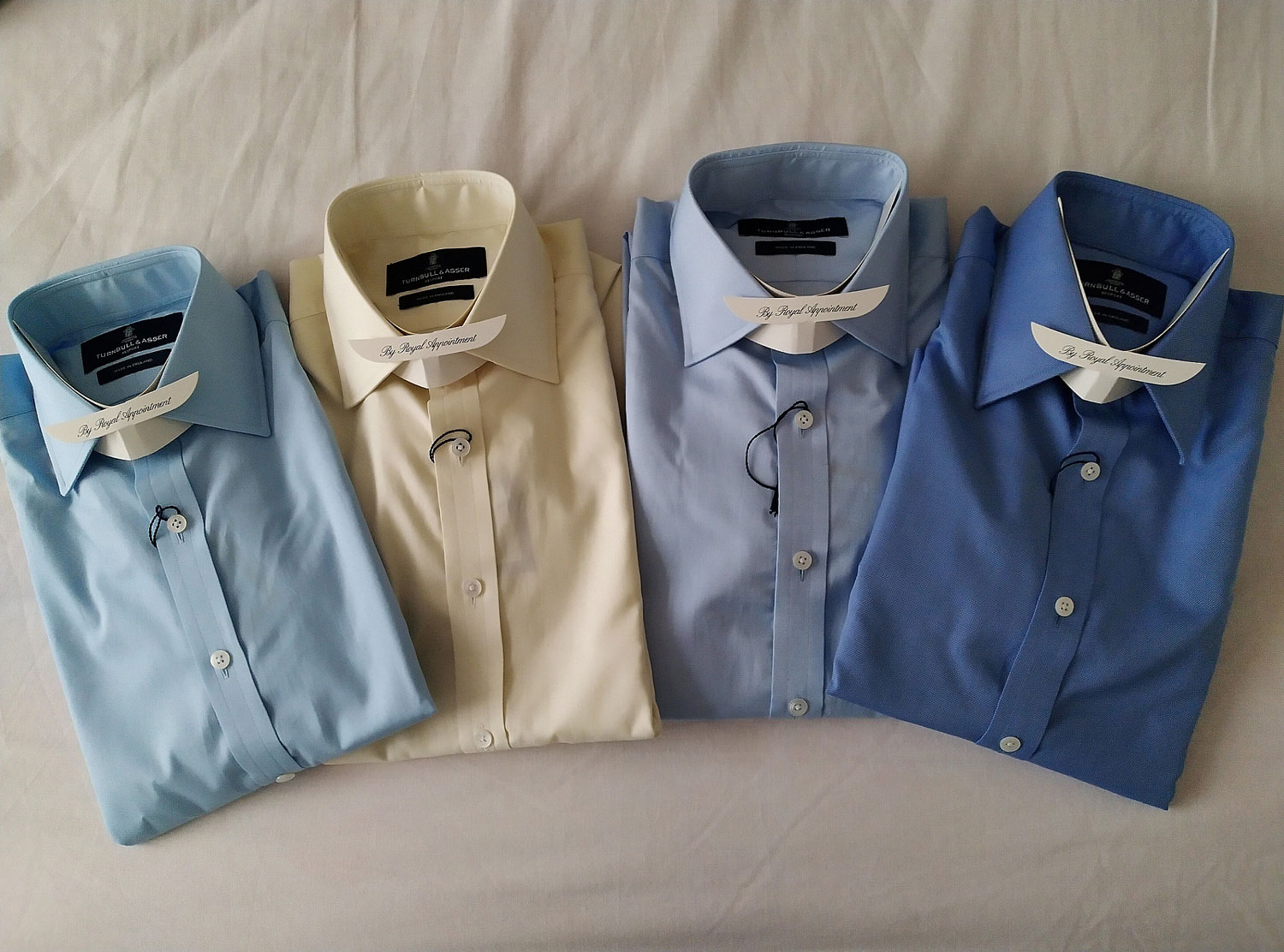 Turnbull & Asser have a great legacy with film stars, celebrities, and for me their connection with James Bond. Without going through the much documented history of the connection between Turnbull & Asser and James Bond, and I would reference Matt Spaiser and Peter Brooker’s book, as a great resource.

They have had a history of outfitting 007 in great shirts from Sean Connery to Daniel Craig. Perhaps their greatest contribution was during the Brosnan era of films where Turnbull & Asser provided shirts and ties over three films.

In November 2020, Blair Ballard (@thebondvivant), had produced a youtube video which had identified the fabric codes of the following shirts:

Tomorrow Never Dies & The World is Not Enough

Tomorrow Never Dies / The World Is Not Enough Blue shirt that Brosnan wore in Hamburg for TND, and is the same shirt material for the pre title sequence in Bilbao. (See location visited in previous article) Shirt reference number: 9300 (005607) 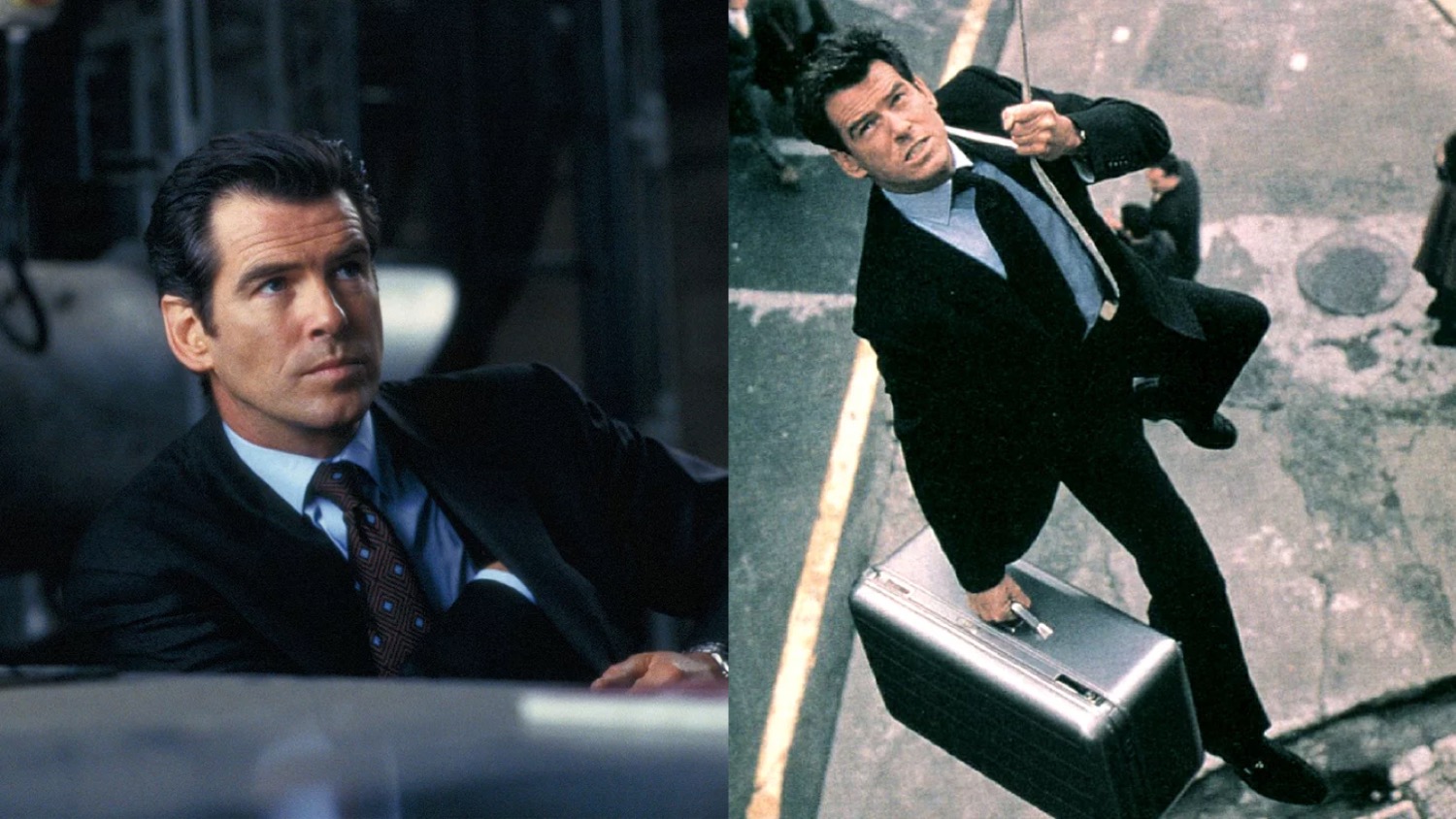 Tomorrow Never Dies cream shirt which he wore when he’s at the Ministry of Defence, and when meeting Q at Hamburg airport. Shirt reference number: 9299 (005649) 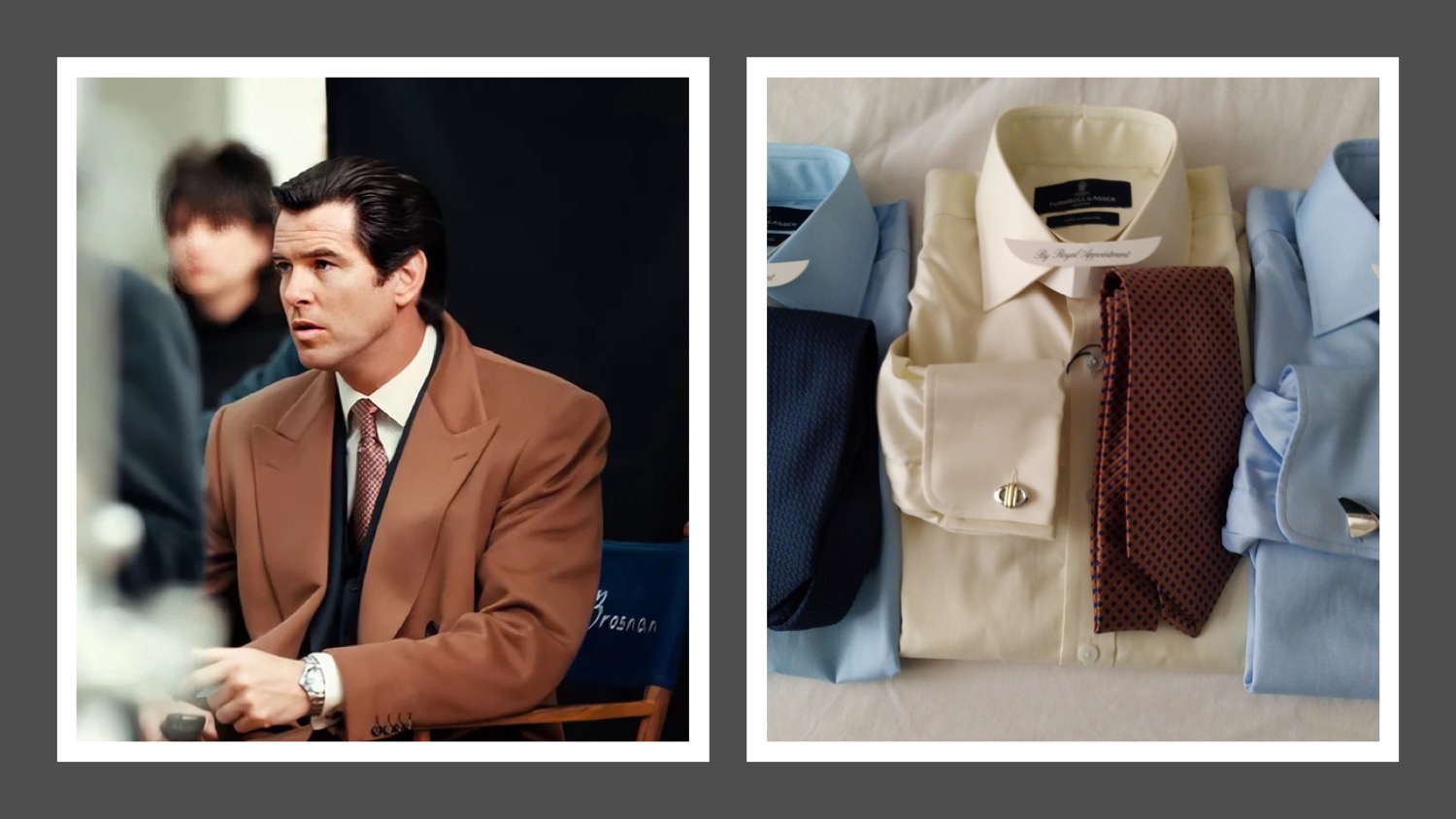 The World Is Not Enough

The World Is Not Enough French Blue shirt Brosnan wears when he’s in Istanbul (See Below). Shirt reference number: 6041 (005306) 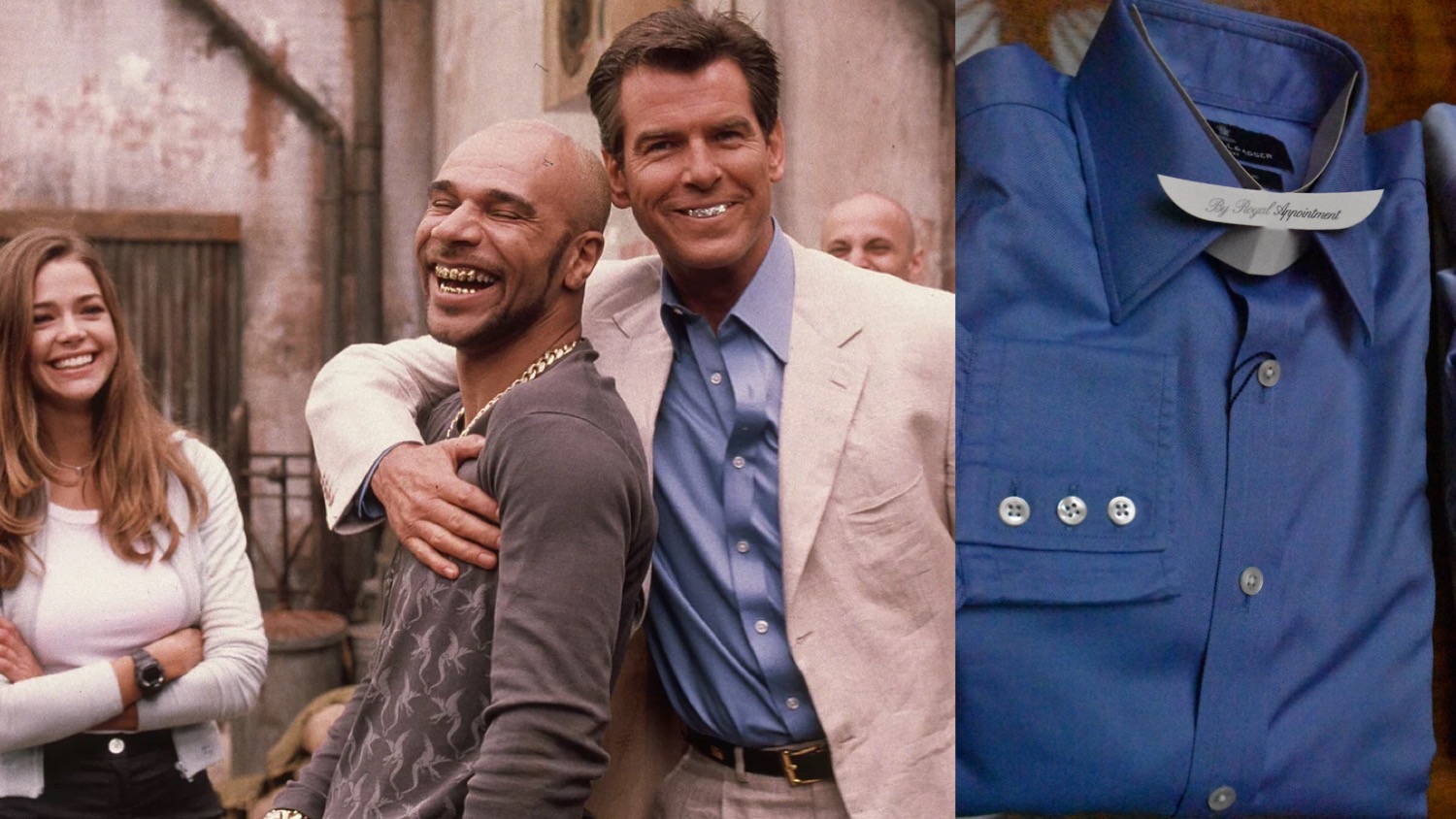 Also, the re-introduction of the classic turnback two button cuff design as seen on Sean Connery’s shirts for Dr No. Shirt reference 1004 (000107) 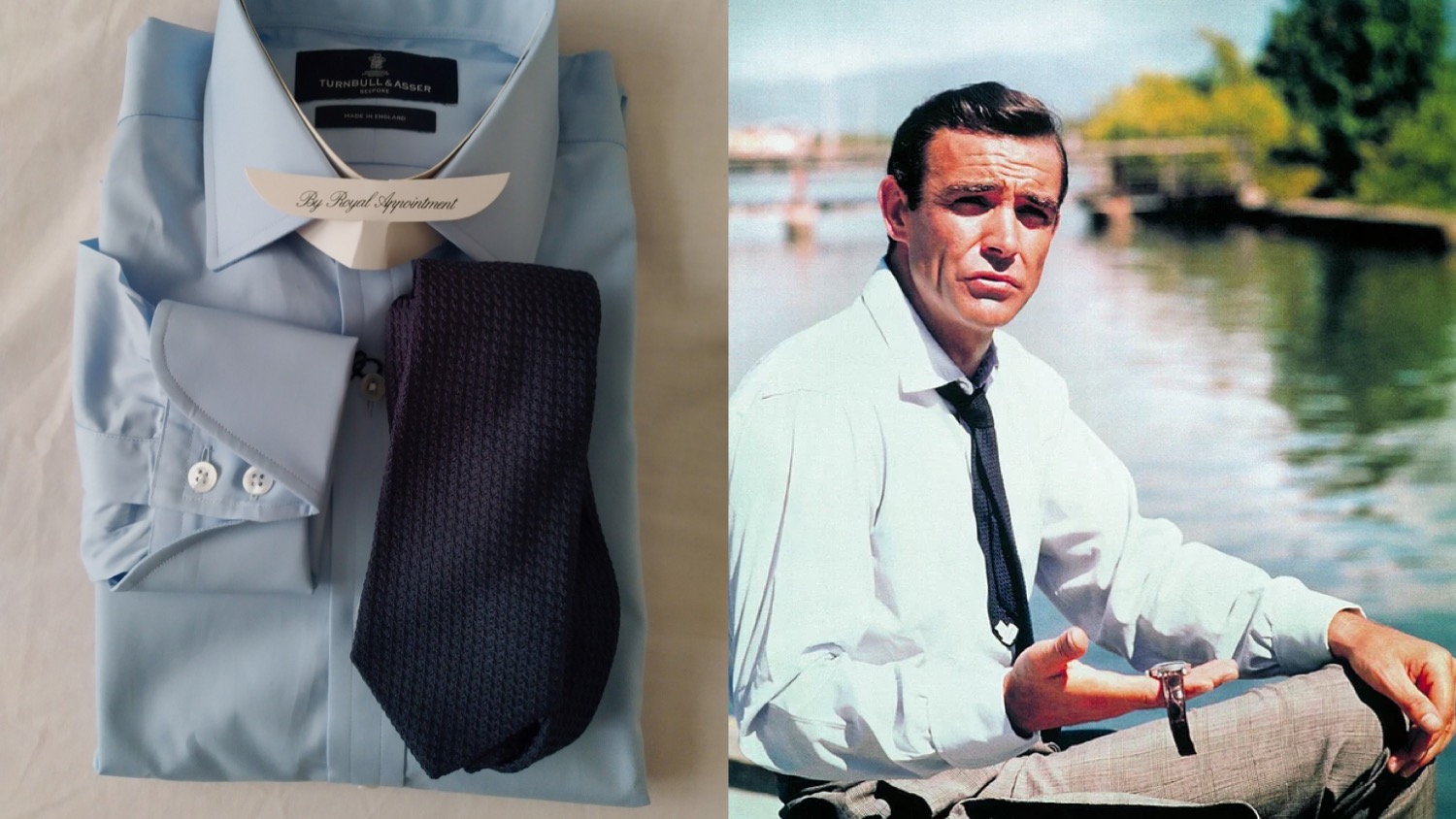 I felt inspired to go down the bespoke route to get, in my opinion, the best Bond shirts amongst the series. For me, Tomorrow Never Dies holds a sentimental value. It was the first Bond film I saw in the cinema, and in the summer of 1997, it was a time of excitement as I visited Brent Cross shopping centre and was lucky to see some of the stunt rehearsals for the car park chase sequence. So, the opportunity to get this shirt was something that appealed to me greatly. 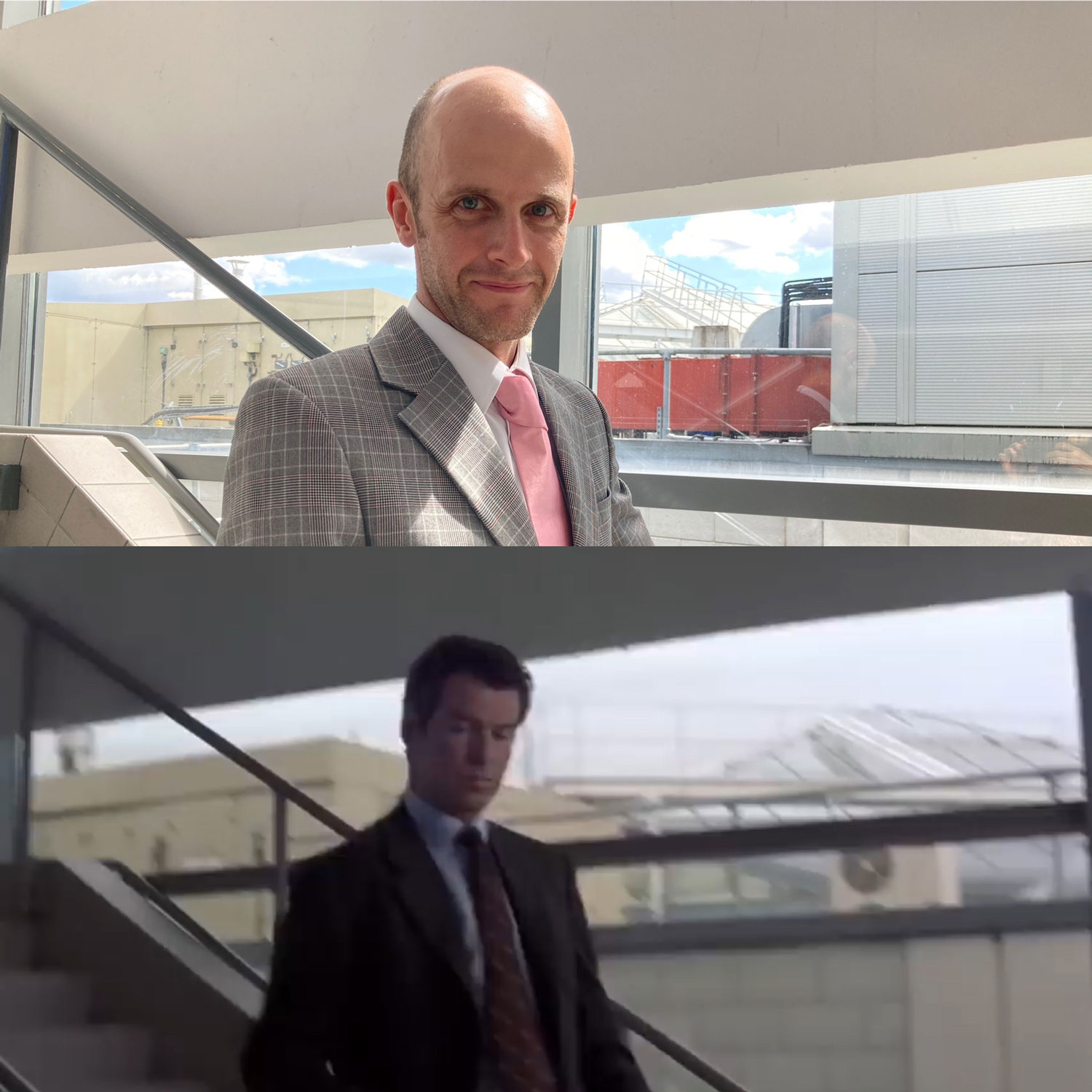 Another thing that appealed to me was the opportunity to get a series of bespoke shirts. I normally wear off the peg shirts, and have found a good fit and cut from another Jermyn Street retailer. However, the ability to get the exact fabric and a shirt that fitted me perfectly was something I have yet to experience. Indeed I have several suits that have been measured to fit me perfectly, and thus it only seemed apt to have a selection of bespoke fitting shirts. 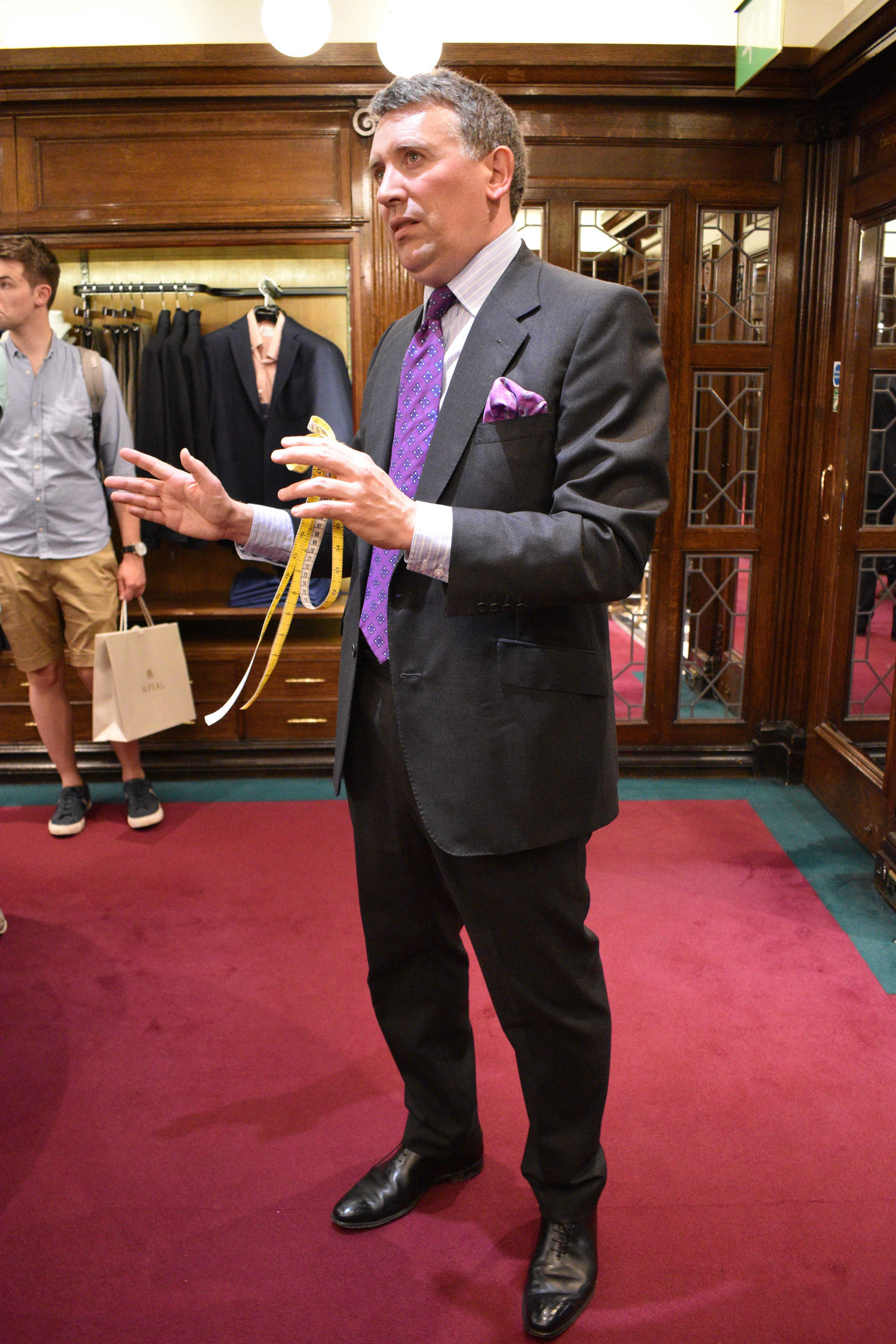 In order to become a bespoke customer, it takes four Shirts

The minimum number required to be a bespoke customer is four shirts, this was a change where the minimum requirement was six shirts. So, what does that offer you? What it means is that as a bespoke customer your pattern has been made, there have been second fittings and alterations made, but it effectively means that I can ring up Turnbull & Asser and ask for a shirt to be made, and it will be made to my pattern.

I first went to Bury Street, around the corner from the Turnbull & Asser Jermyn Street store, and it is an experience to walk into their bespoke parlour, the décor is historic, but the meeting room open us with an impressive sky light that fills a room filled with fabric and autographed pictures of previous and famous patrons. Indeed, if you ever get the chance to visit Bury Street do take the opportunity to see this place. 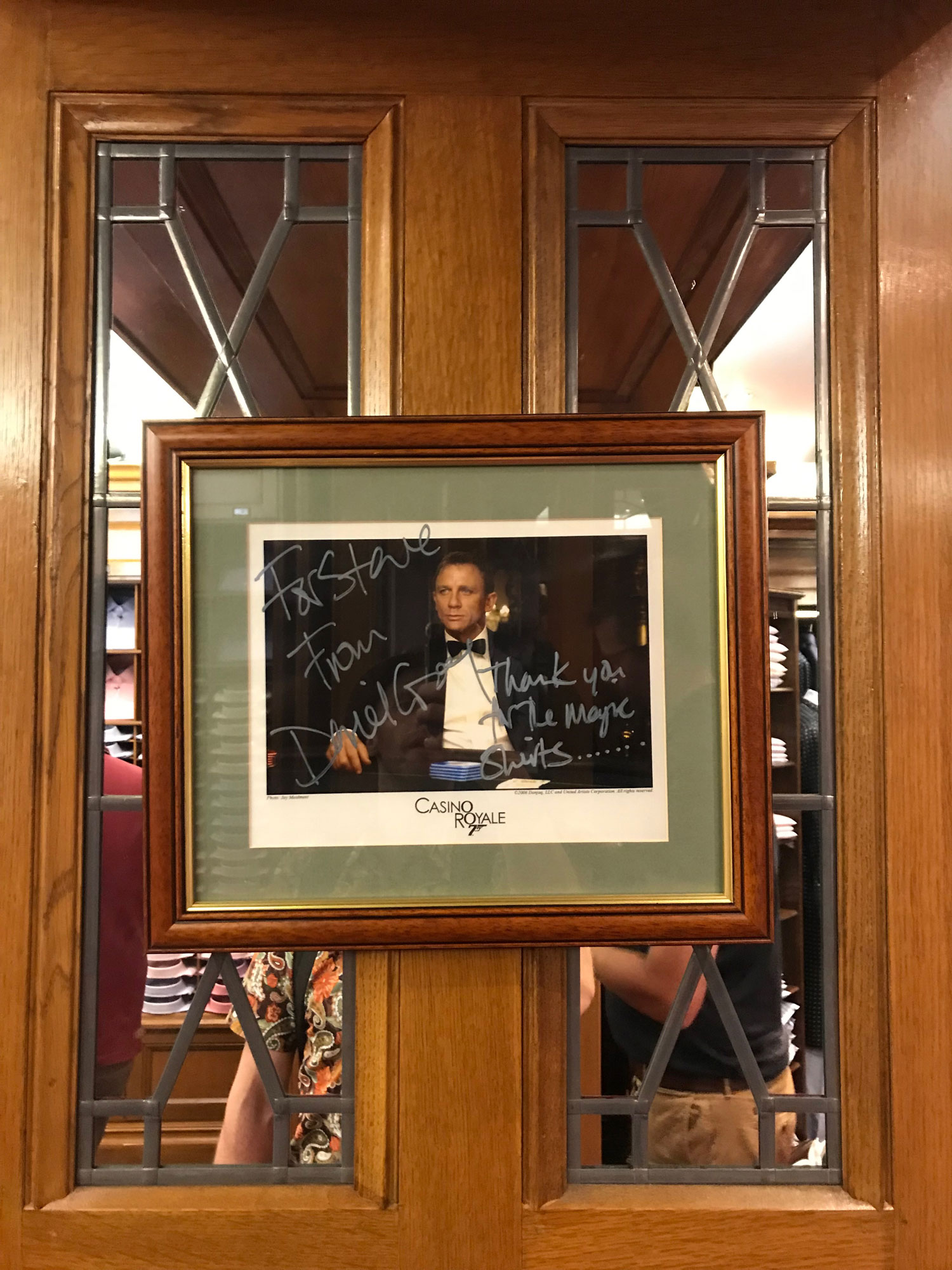 The person who measured me was Scott Martin, a seasoned T&A employee, who assisted me in creating the shirts for the order. The whole process was very relaxed, and we talked about collars and cuffs for the shirts and for which occasions I would wear the shirt, the aim being to give the customer the best experience and quality for their desired shirts. Using the information from Blair, we were able to create a docket, and the measurements itself took only about 10 minutes where they take meticulous measurements to ensure accuracy.

The measurements include chest, waist, shoulders, wrist measurements (including making sure that your watch can fit over the sleeve opening), and the length of the shirt, this was key as I am not a tall person and I have had shirt tails that fall a long way! They also look at your posture, and they make amendments so that the shirt fits you well. 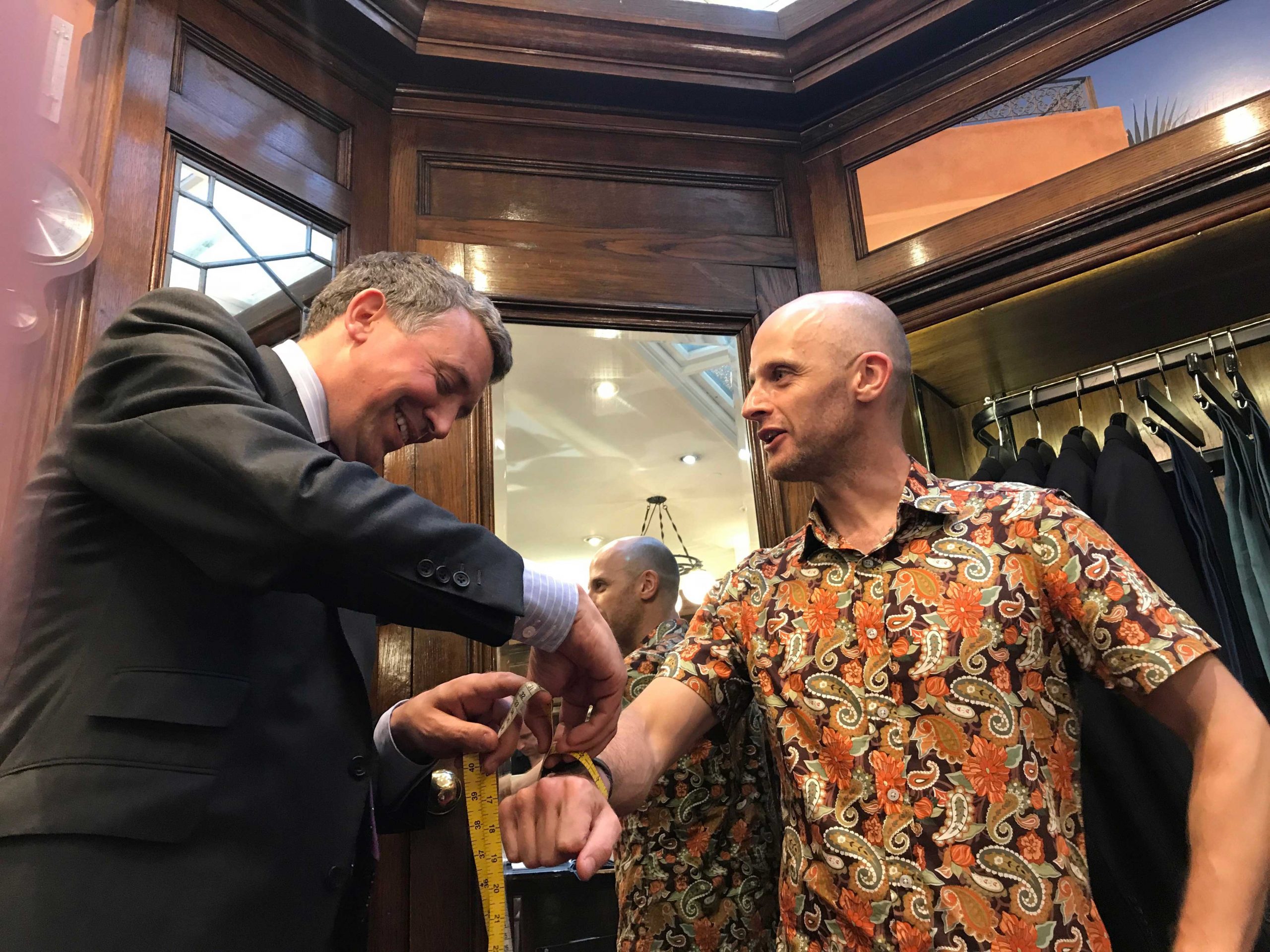 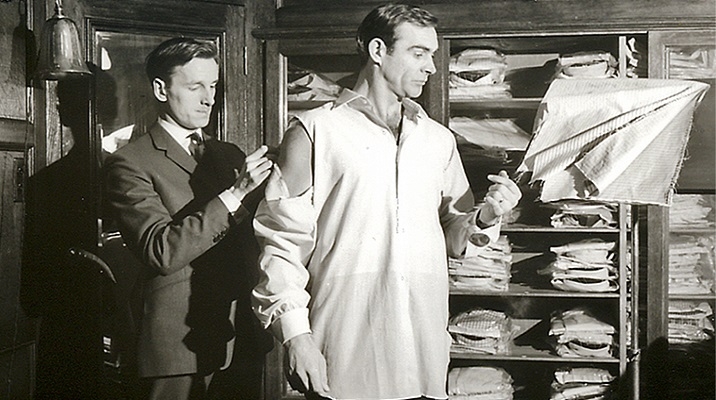 I have detailed the fabrics that Blair had described, but I thought to go into more detail about the fabric. For the Tomorrow Never Dies shirts, both the cream and light blue shirts are Sea Island Cotton, and as such attract a higher premium in the cost of the shirt. At the same time the feel of the fabric is something else. The lightness and softness of the fabric meant that this fabric will breathe very well, and definitely for use in spring / summer / autumn.

Update Edit by Dan on A Very English Institution –

A small pedantic point, but Brosnan doesn’t really quite wear Sea Island cotton for his films, but rather “SI Quality” (as evident on his tags!). Extra long Egyptian cotton with similar characteristics, though not as rare or grown in the West Indies 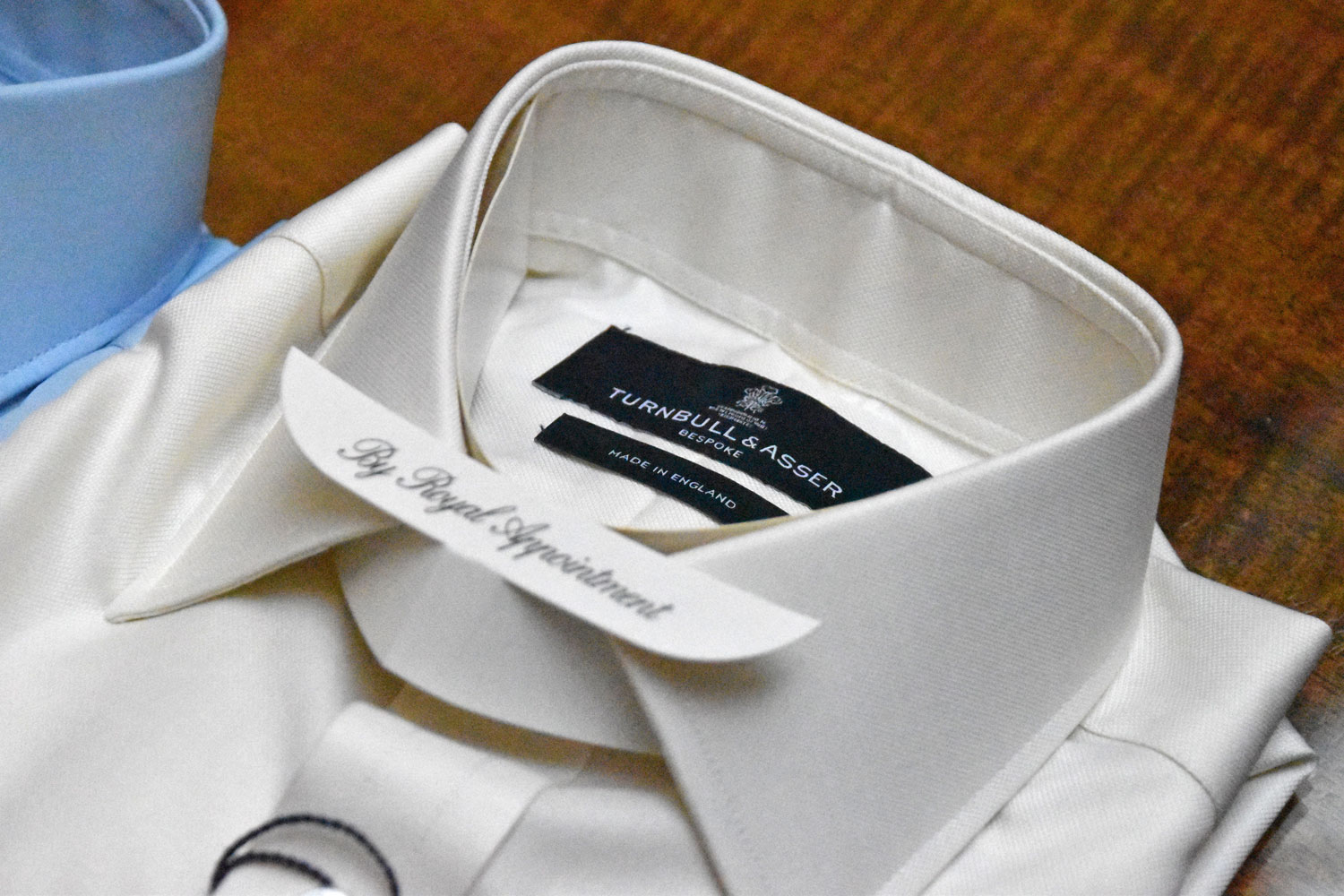 I decided to make some personal touches, these included putting a Prince of Wales collar. I felt that the collar was just perfect in providing a good spread for full Windsor tie, but not as extreme as a more cutaway collar. For the cuffs, I opted for double (French) cuffs, and went for a rounded cuff, rather than a square cuff, I felt it added a bit more softness to the design, and look a bit smarter. The shirts come with mother of pearl buttons as standard. 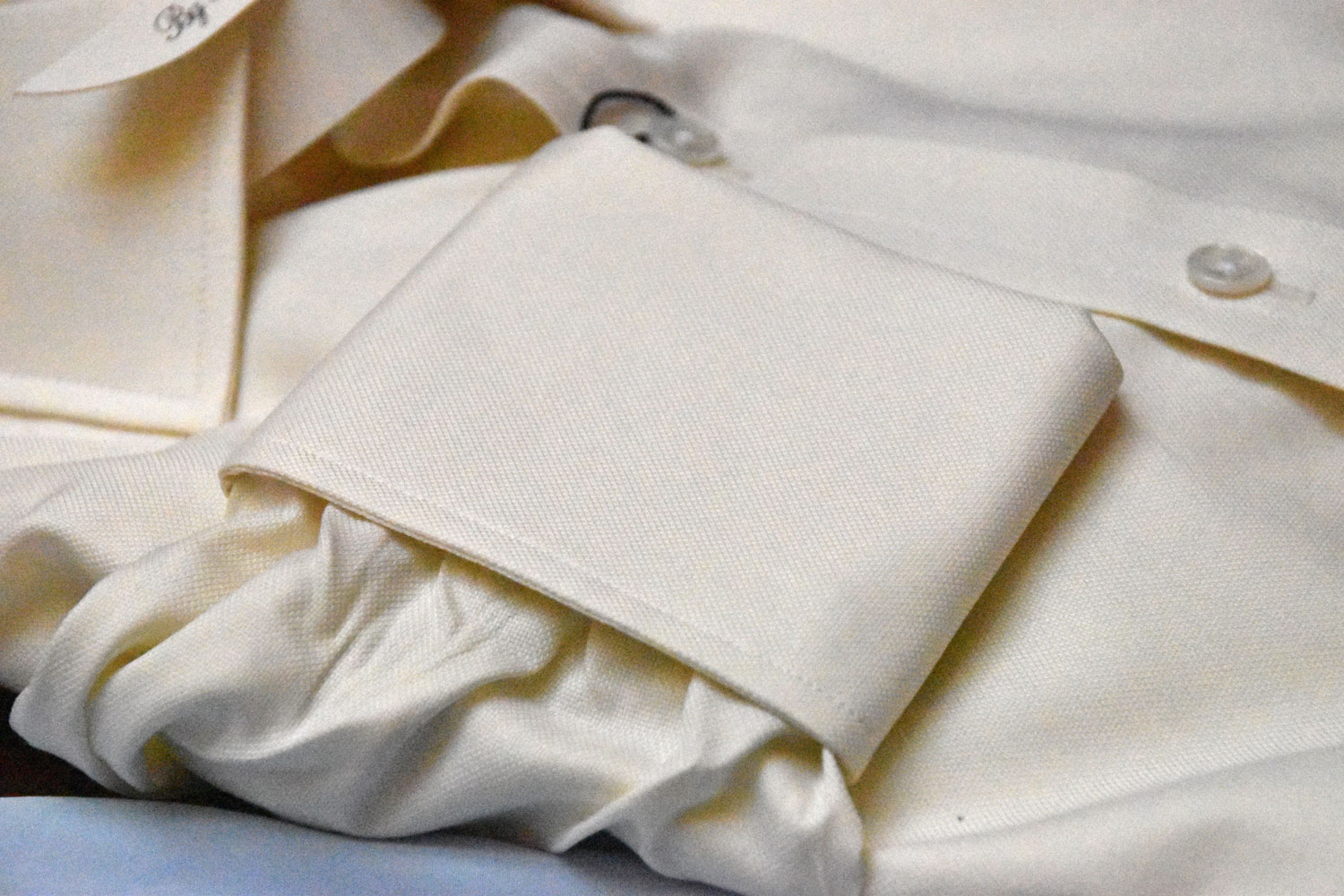 The French blue shirt as seen in The World Is Not Enough was another personal favourite. This was an Oxford shirt, and has a very nice pattern which is similar to a birdseye pattern. For this shirt I went for a more screen accurate look with the Turnbull & Asser collar, and a three button cuff as seen in the film. This was the tester shirt for me to wear and wash before coming back for a second fitting. 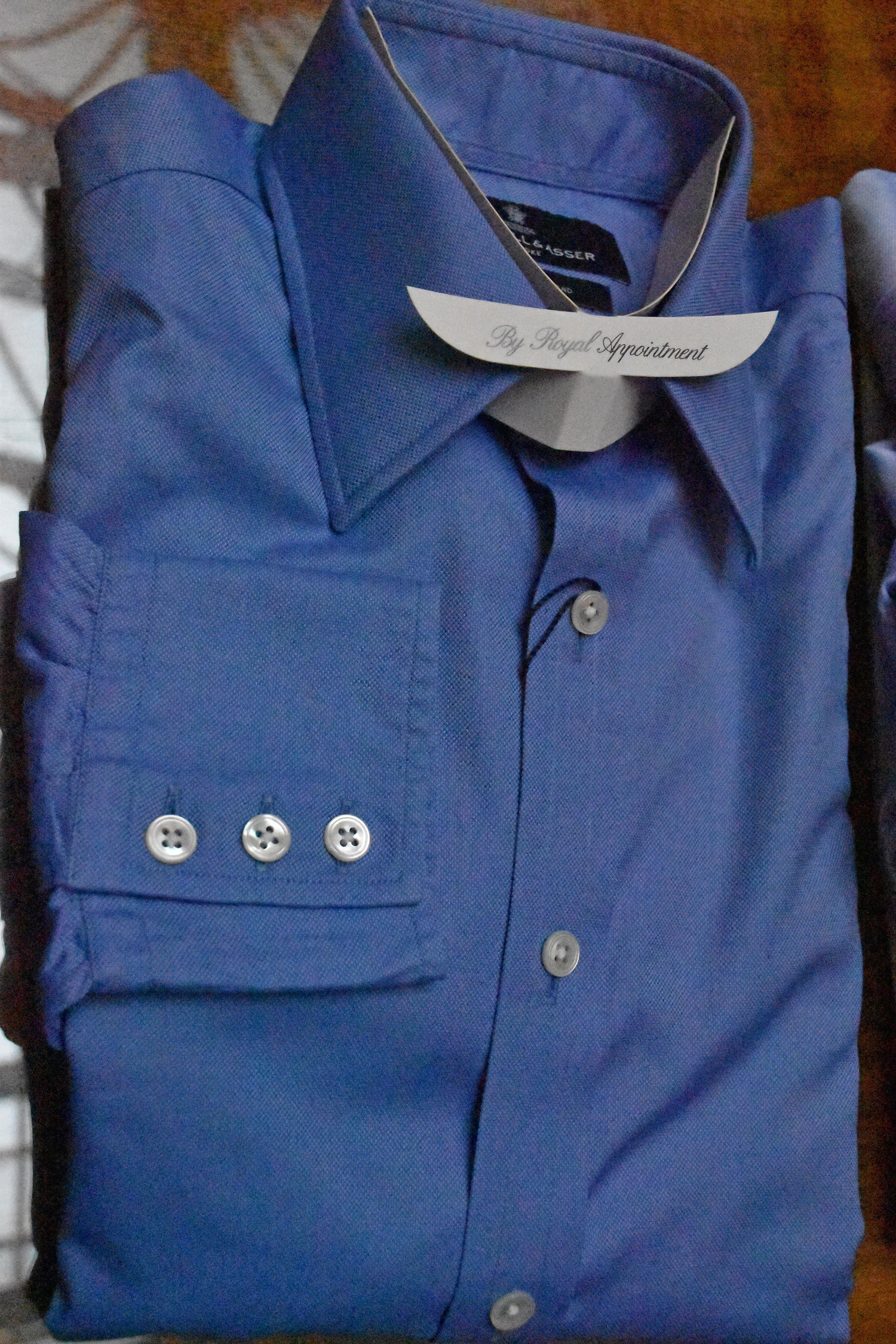 Last but not least

The last shirt was the light blue poplin shirt from Dr No, as designed for the Turnbull & Asser legends collection. Whilst this shirt was commercially available, I decided to add this to the bespoke order. I also made a change to the collar from a very cutaway collar to the Prince of Wales collar. The reason being that I felt it looked better should the collar button be undone. 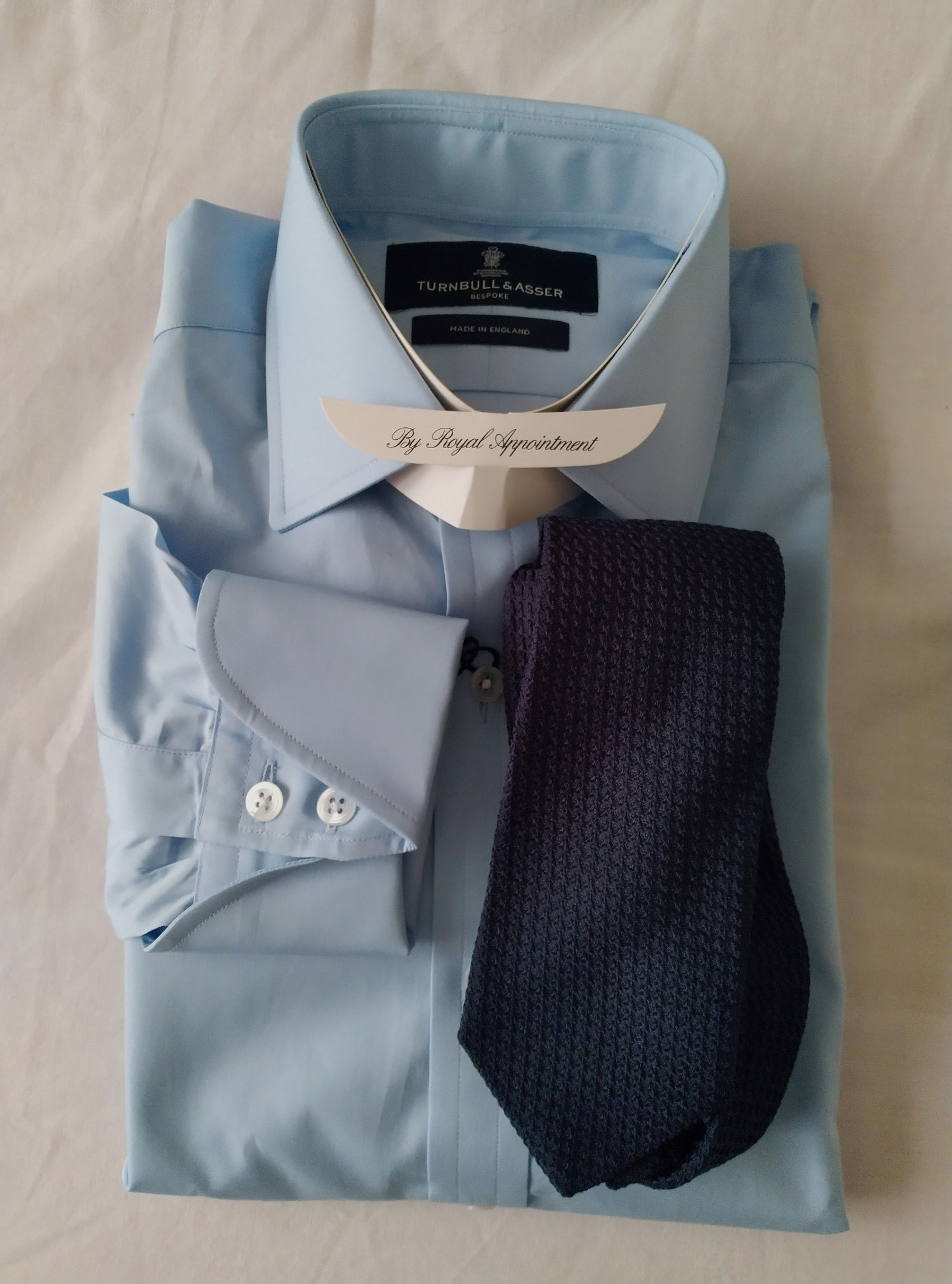 I received the The World Is Not Enough French Blue tester shirt within three weeks of the order. Indeed the wizards at Quedgeley, Gloucester, had managed to get this turned around really quickly. The shirt was a great fit, and the fabric was very soft. It was also really easy to iron, and the sleeves were perfect. I wore this shirt a few times, and washed and laundered it a few times before returning back to Bury Street to see how it fits. 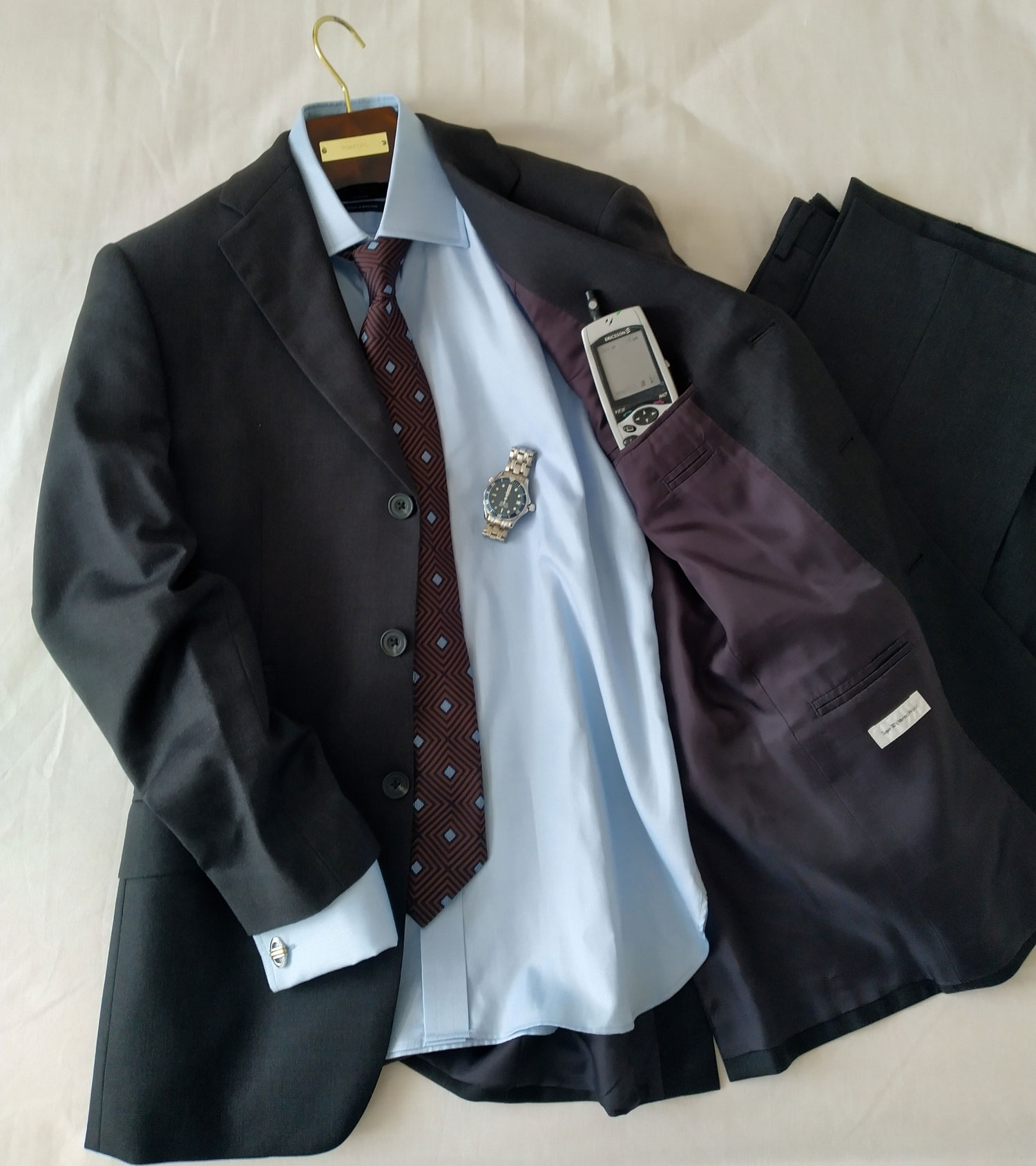 At the second fitting I wore the shirt and the front was perfect, but there was a little bit of bunching at the back, and after a few discussions it was decided to take it in a bit, enough to maintain a good silhouette, but not shrink wrapped. It was at this point, the other shirts were ordered, and I added some personalisation to the shirts. 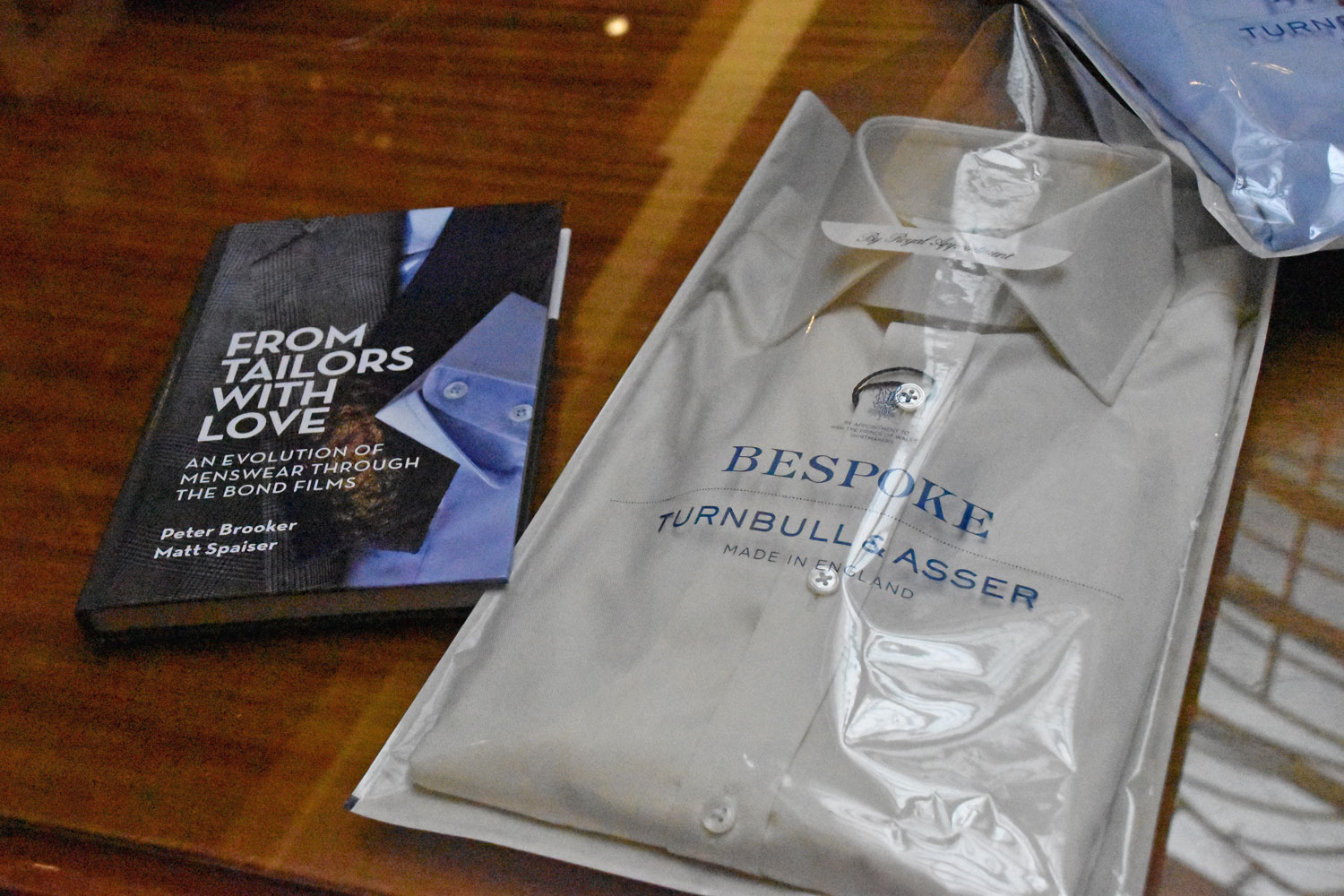 Oh who left that book there?

After a bit of a summer break, I went to pick up the bespoke shirts and brought along Peter Brooker and Daniel Gaster. Pete took some amazing photos, and the shirts themselves look resplendent. For me these shirts are something that I will be wearing on a regular basis. Indeed that is the whole reason for going bespoke in that you have a great fitting shirt.

I spoke to Pete about why I went down the bespoke process. For me it is a chance to get something that is unique, but something that will give me an inner confidence boost that I am wearing my own version of 007’s shirt. AND I will accessorise it with the right cufflinks and ties. 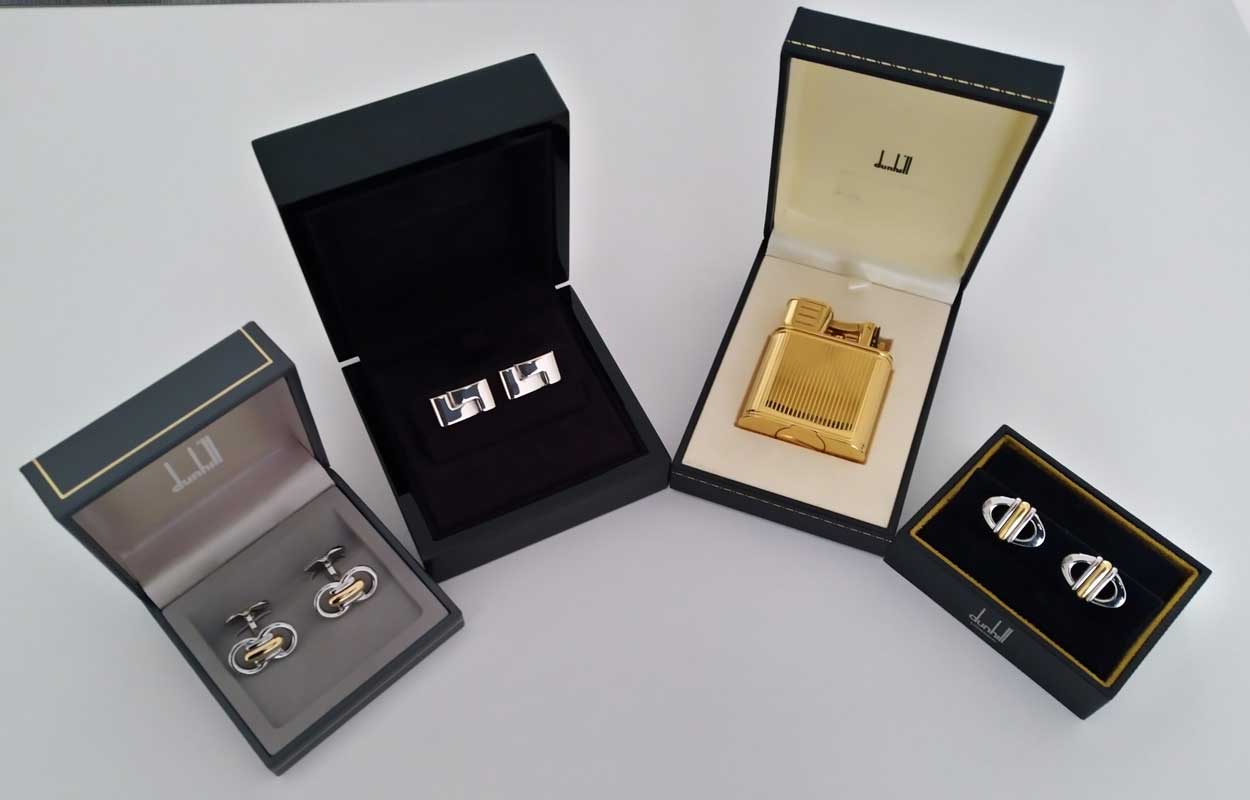 The staff at Turnbull & Asser are amazing, their experience and guidance is something that I take seriously, but at the same time they are interested in their clientele and provide them with a great experience with clear communication, and really bending over backwards to try and help you. I had a navy grenadine tie that had some fraying on the reverse of the tie. Despite their best efforts it wasn’t possible to fix. However, the fact that they were willing to look and try and mend it says a lot about wanting to help the customer.

Another great thing about Turnbull & Asser was that you were allowed to take photos, a far cry from other boutiques who discourage any media or social media. For a Bond fan it is a place to visit. There is a 007 desk which sits alongside a side picture of Daniel Craig and framed ties from the three films featuring Turnbull & Asser ties. 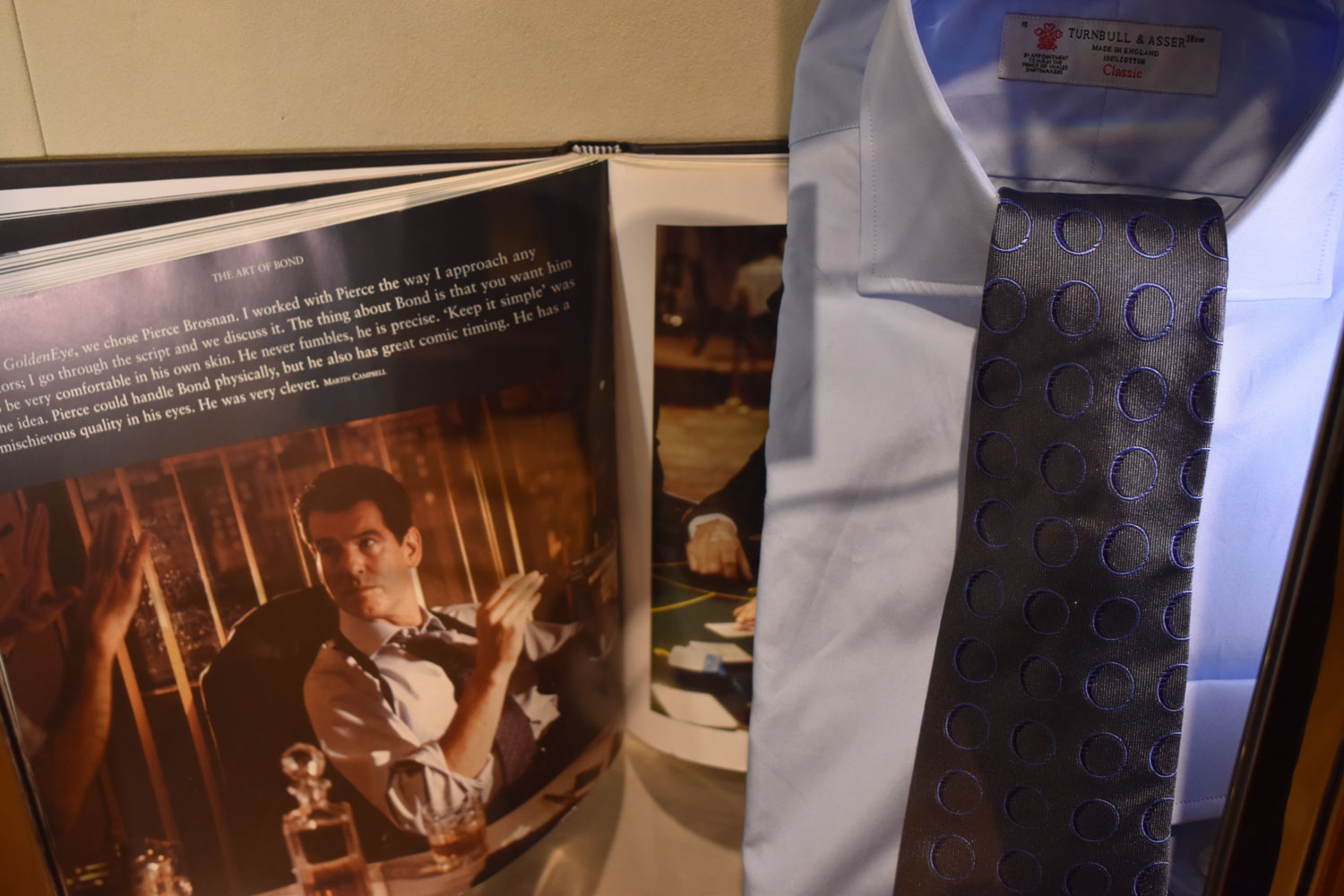 Do I feel any different now that I am a Bespoke Turnbull & Asser client, not really, but what I do have now is the luxury to literally pick up the phone (or email) and say I would like a shirt in this fabric, with this collar, and this cuff, and literally on the basis of this information the shirt will be created. This is also the start of a journey with these shirts. The colours may seem very conservative, but I do hope to make the most of every opportunity to wear these shirts. This is definitely a 10 / 10 experience for me and for the product. 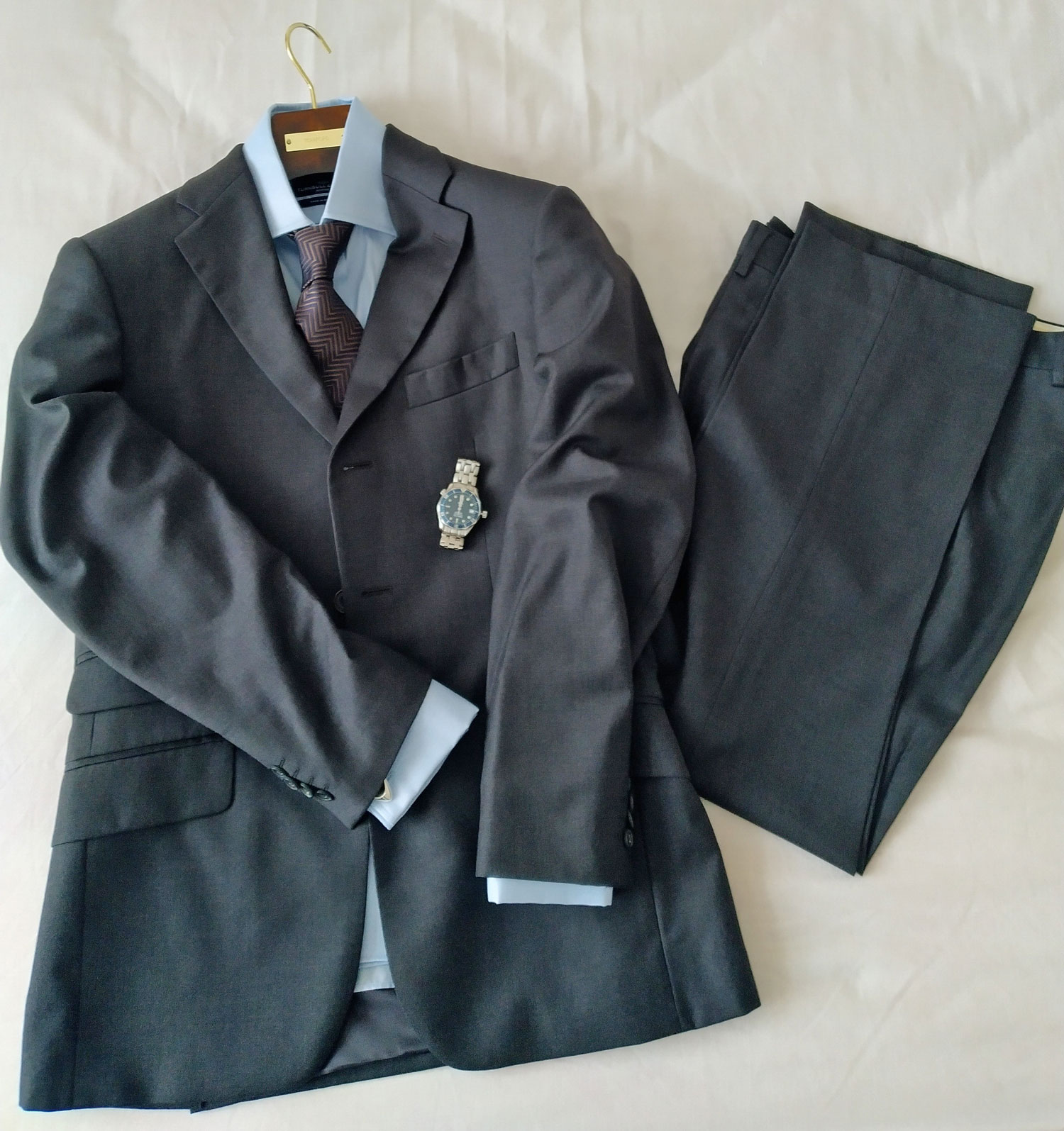 A small point about the cloths to add to what @a_very_english_institution was saying. The three Brosnan shirts are all Oxford weaves, not just the TWINE shirt. And they’re all of the Royal Oxford type, which distinguishes them from the regular oxford cloth that’s so popular in America. The Birdseye Weave heading is also misleading, because though it looks similar, the weave is entirely different. (Amended)