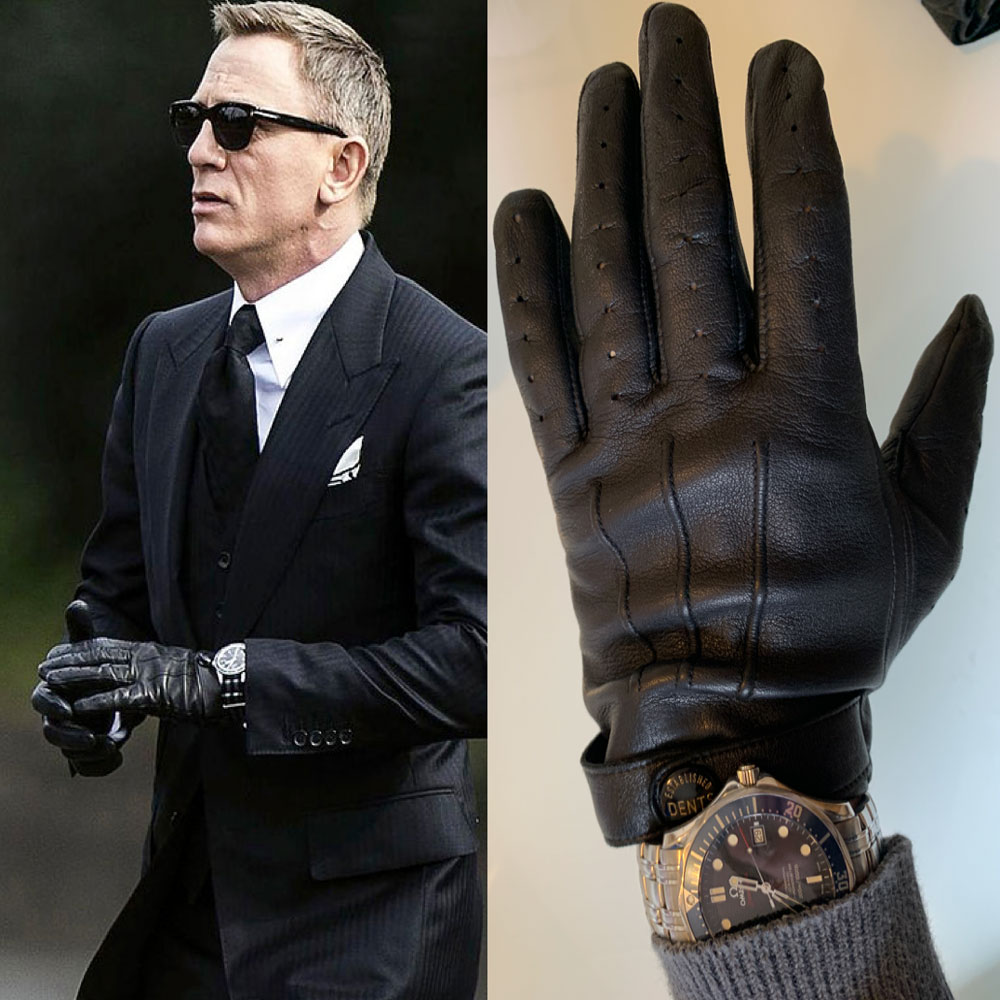 Bond wears these ‘Fleming’ Dents Driving gloves while driving the Aston Martin DB10 through Rome, at the Funeral of Marco Sciarra, while shooting the hitmen sent to kill Lucia Sciarra and finally, right at the end of Spectre driving off through the streets of London in the Aston Martin DB5.

Gloves that you drive in

I’ve never previously owned leather driving gloves. Yes I’ve driven with gloves on when it was cold, but this was to keep my hands warm. I’ve never bought gloves for this specific task previously.

Traditionally driving gloves are a short glove, so the wearer can view their wrist chronograph. They were designed to add an extra layer of grip, as steering wheels used to be made of wood, or ivory.

Like the ‘Daniel’ from Skyfall, these are unlined gloves for a closer fit (so that drivers don’t lose any sensitivity from the steering wheel).

Unlike the ‘Daniel’ they have an elasticated palm, wrist strap with stud fastening (for a proper fit around the wrist) and have perforations in the fingers (for ventilation). All of which are traditional elements for a driving glove. 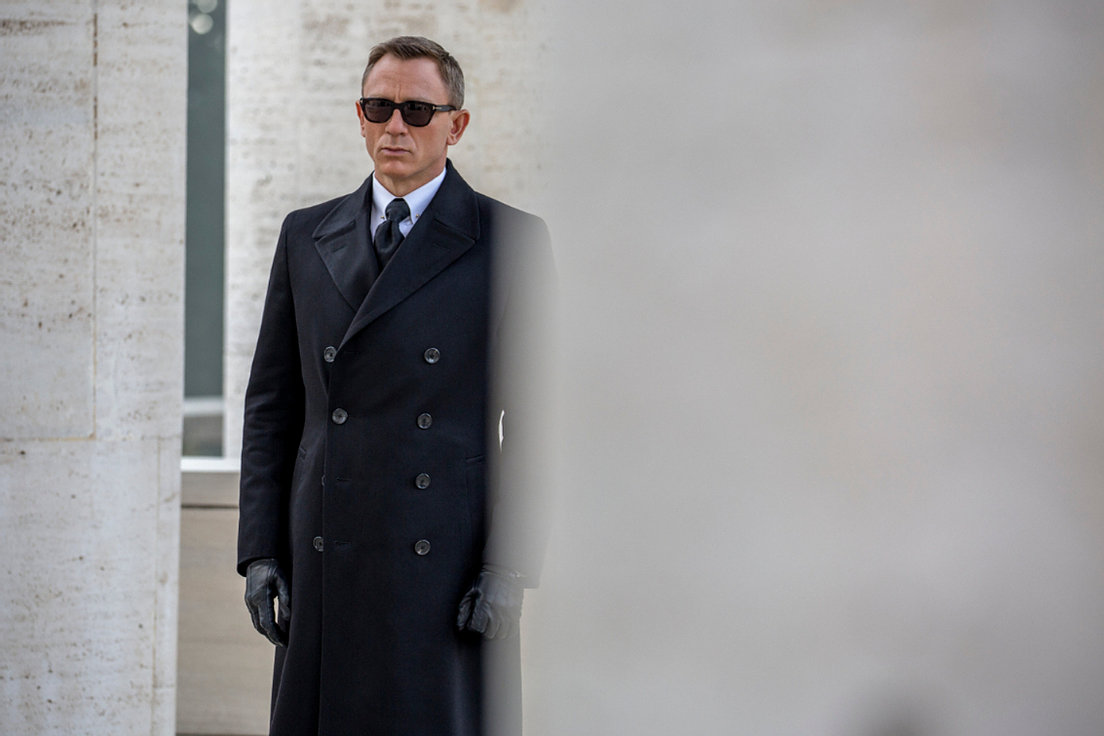 I didn’t recall seeing Bond wearing leather driving gloves previously until I watched On Her Majesty’s Secret Service and saw Bond taking a pair off as he enters the office of the real Sir Hillary Bray.

So, it could be something Bond has chosen as part of the character he is trying to portray (The Italian Gangster), but then he liked them so much that he keeps them, as you see when he drives off in the DB5 at the end of Spectre.

Dents were previously seen in Skyfall (with the now renamed ‘Daniel’ gloves). So, these could just be something that Bond had previously purchased. Adding them to his Rome outfit, rather than buying them specifically. 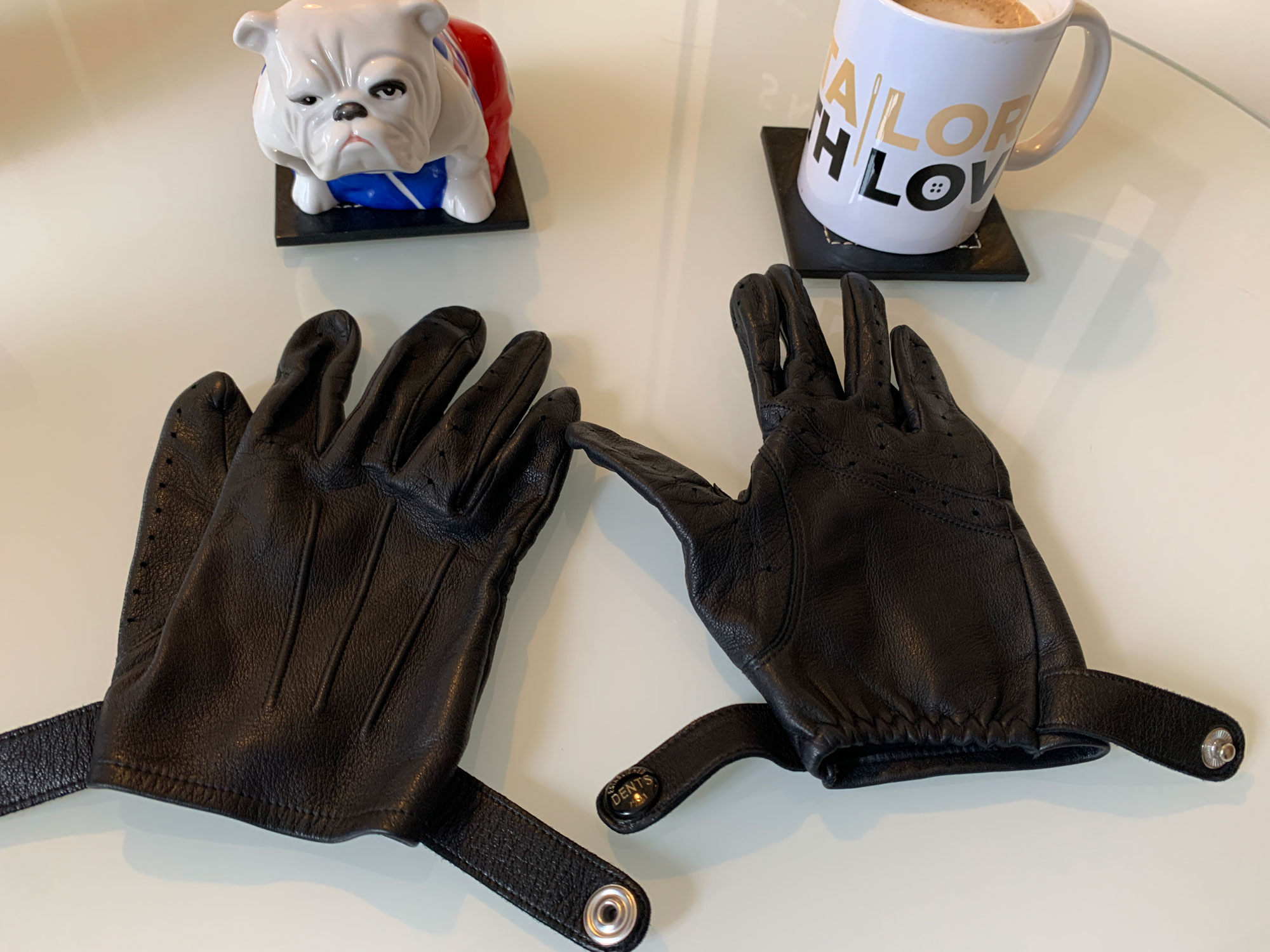 In Fleming’s books Bond was a keen motorist, so it’s possible that the literary Bond would wear driving gloves while driving his 1930’s 4.5 litre supercharged Bentley Blower. It would have been right for this particular car, and the time. But would a modern Bond really need driving gloves?

Modern cars don’t have steering wheels made from wood or ivory these days, usually it would be made from plastic or have a leather coating to them. 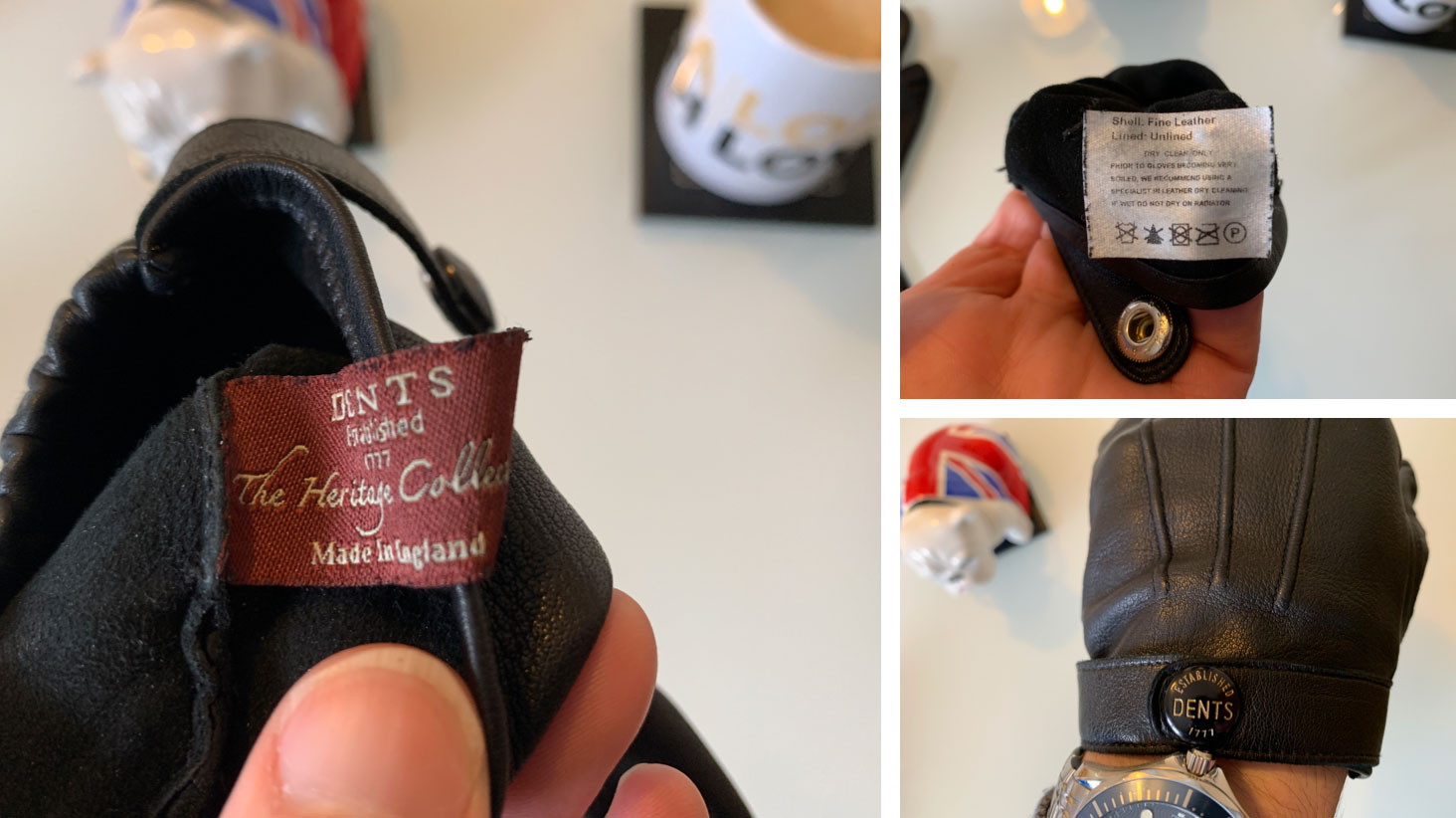 Driving gloves still provide the drive with extra grip and protection, at least that’s what Wikipedia says about modern day driving gloves. And they are still popular, just looking at Dents website alone there are about 30 different styles of driving gloves for Men and Women.

I’ve worn mine to drive my car to see what they are like. Now I don’t have a sports car and I don’t drive like I’m being chased by Hinx or by goons because Mr White is in the boot.  But they do offer that little bit more grip, more so than an old pair I used to keep in the glove box. With this old pair, they were designed to keep your hands warm, not provide any additional grip. As a result, I had less grip but warmer hands. 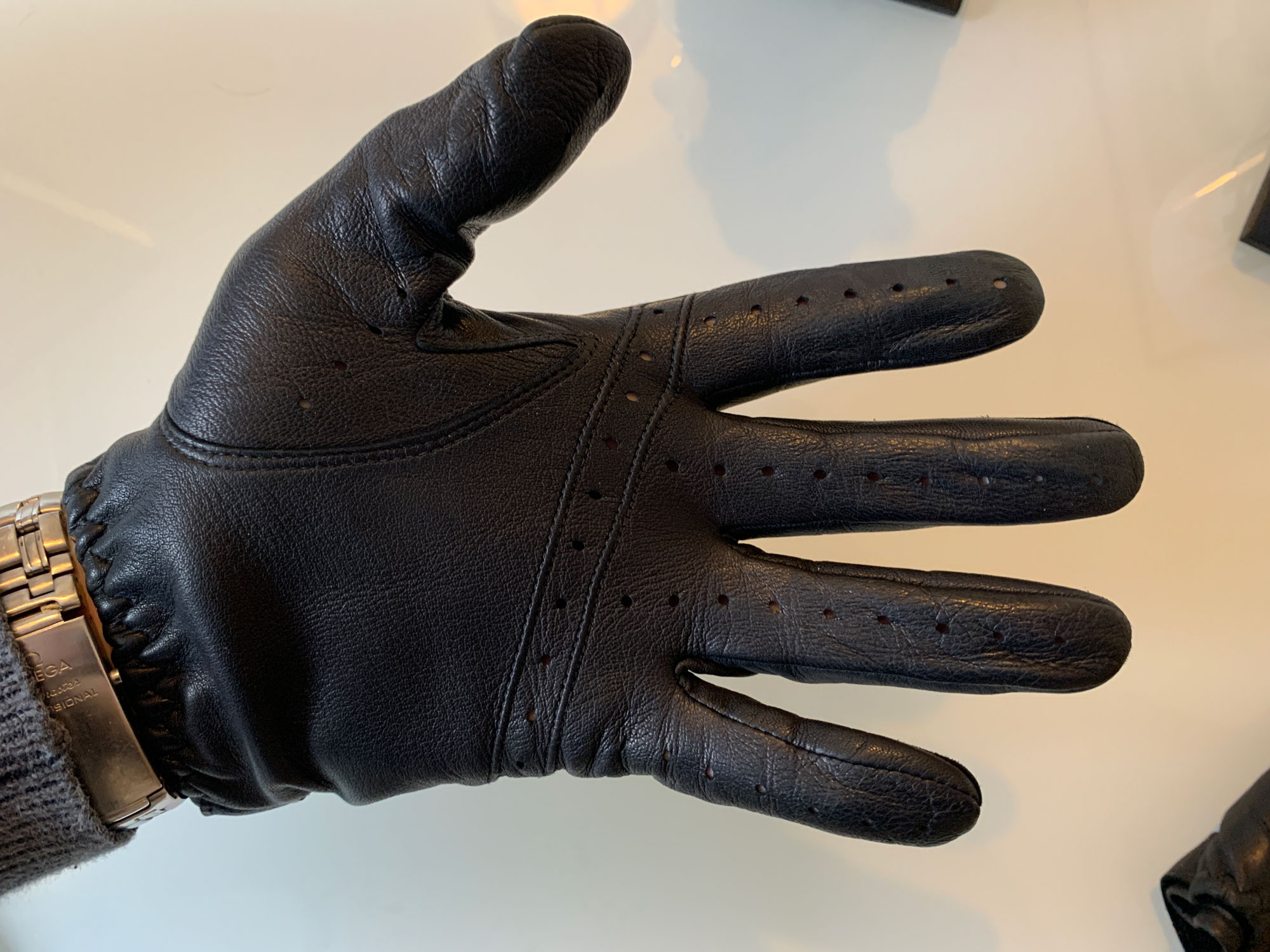 From uncertainty to certainty

I have to admit that I wasn’t certain when buying these, not of the sizing, as I had learned from the last time on that.  This was more would I actually wear them and use them? Well, the answer is yes. After wearing them instead of the Skyfall ‘Daniel’ gloves I used them for both driving in and also for wearing them out to protect my hand from the chill.

They also like the ‘Daniel’ don’t offer too much insulation from the extreme cold, as they are unlined gloves.

I find the ‘Fleming’ to be a very comfortable glove, they fit well, they secure around my wrist and the popper detail is very nice. As they are plain black, they aren’t overly flamboyant which would suit Bond and me. I find that these leather driving gloves work well with smart and smart casual attire, not so much with casual outfits. From a position of uncertainty when I first made this purchase, to many years of wearing them, I’m really glad that I chose to get them.

Article by Daniel Gaster. Be sure to follow Daniel on Instagram. All screencaps in this post are the copyright of their respective movie studio and are reproduced here under the Fair Use doctrine. Two photos of Daniel Craig sourced from thunderballs.org the unofficial James Bond picture archive.