Spectre – The TOM FORD Made to Measure Shirt – Review 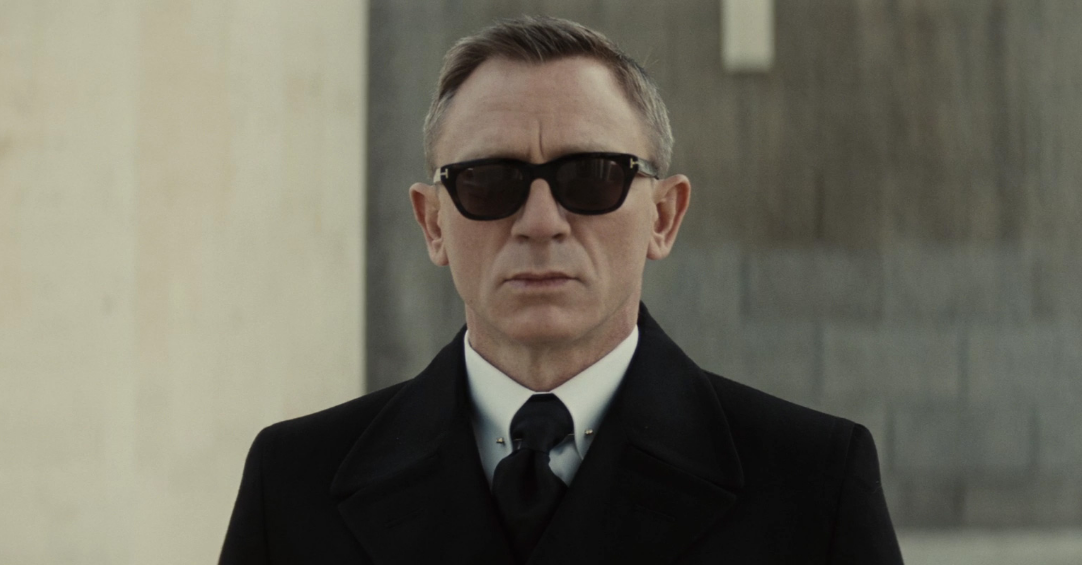 Worn undercover in Rome by Bond in Spectre, during the funeral of Marco Sciarra, at the home of his widow Lucia, then straight to the Palazzo Cardenza (which oddly looks like Blenheim Palace) to attend a meeting with SPECTRE, followed by a car chase in the streets of Rome.

This shirt did feature as part of the Spectre capsule collection, but I didn’t buy it at the time. I’d just forked out for the ties and the pocket square, so had no room (or rather money) for anything else at the time.

It wasn’t until a few years later that I decided that I wanted this enough to go down what TOM FORD call their ‘Made to Measure’ route. 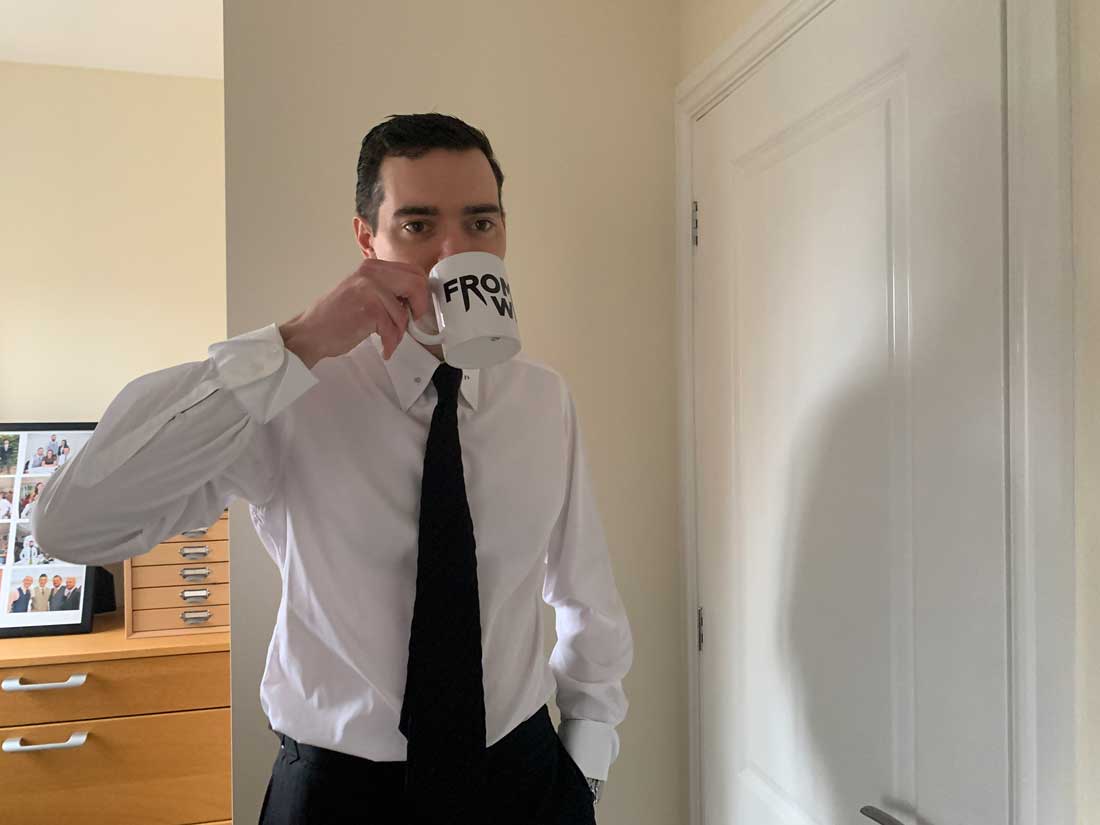 Model: Poplin cotton with pin collar with ‘Dr No’ cuffs.

I have visited the TOM FORD London store many times. Usually when I did, I ended up with a tie on the way out.  On this occasion I had pre-planned and booked myself in. On a previous visit I had previously spoken with Aman (who is someone I still have contact with) about this shirt, and he said it would be easy enough to recreate with TOM FORD Made to Measure.

The pin collar is something that TOM FORD continue to re-produce with double or single cuff shirts, and in multiple colours. And the cocktail cuff (which TOM FORD call the ‘Dr No cuff’) was available but only through TOM FORD Made to measure.

From memory there was (possibly still is) three ways to buy a shirt through TOM FORD. 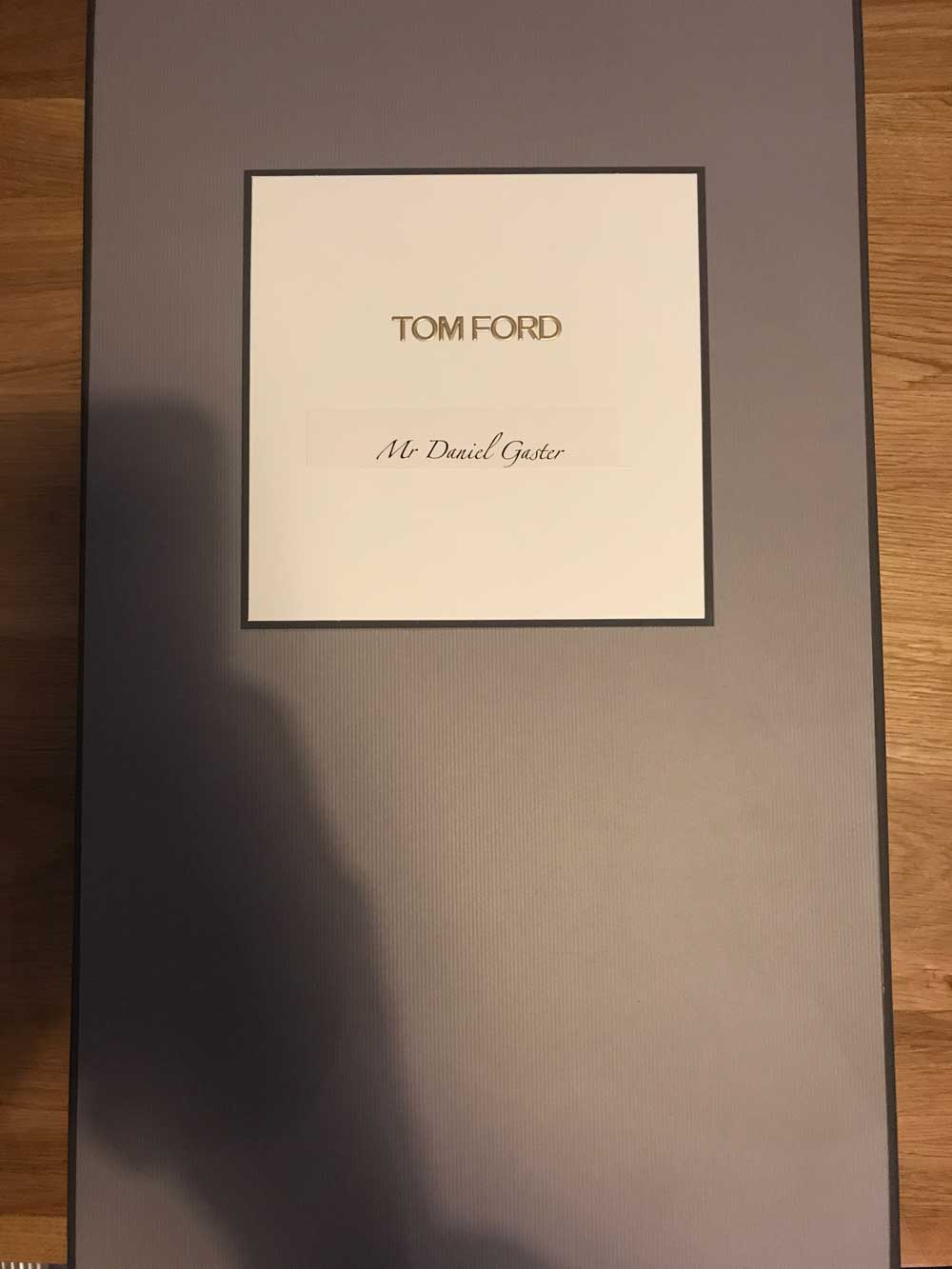 Off to the fitting

Now I want to stress here that I have estimated the prices for the first 2 options. I know that when I was looking to have another shirt made a year later that MTO was £405 and MTM was £435. There is a percentage difference between the 3, which I just cannot remember.

This is based on using the same material, if I’d chosen to have it in Sea Island Cotton, then it would be a totally different price. The difference in price between having the MTO which would be a standard size 41 shirt or the MTM was so slight it wasn’t worth considering.

When you visit the London store you go upstairs. On the left you have Womenswear, straight ahead you have Menswear, which is where I went to meet with Aman. He introduced me to the MTM gentleman and led me back to the stair way and to a room opposite Menswear, which I can only describe as a fitting lounge. 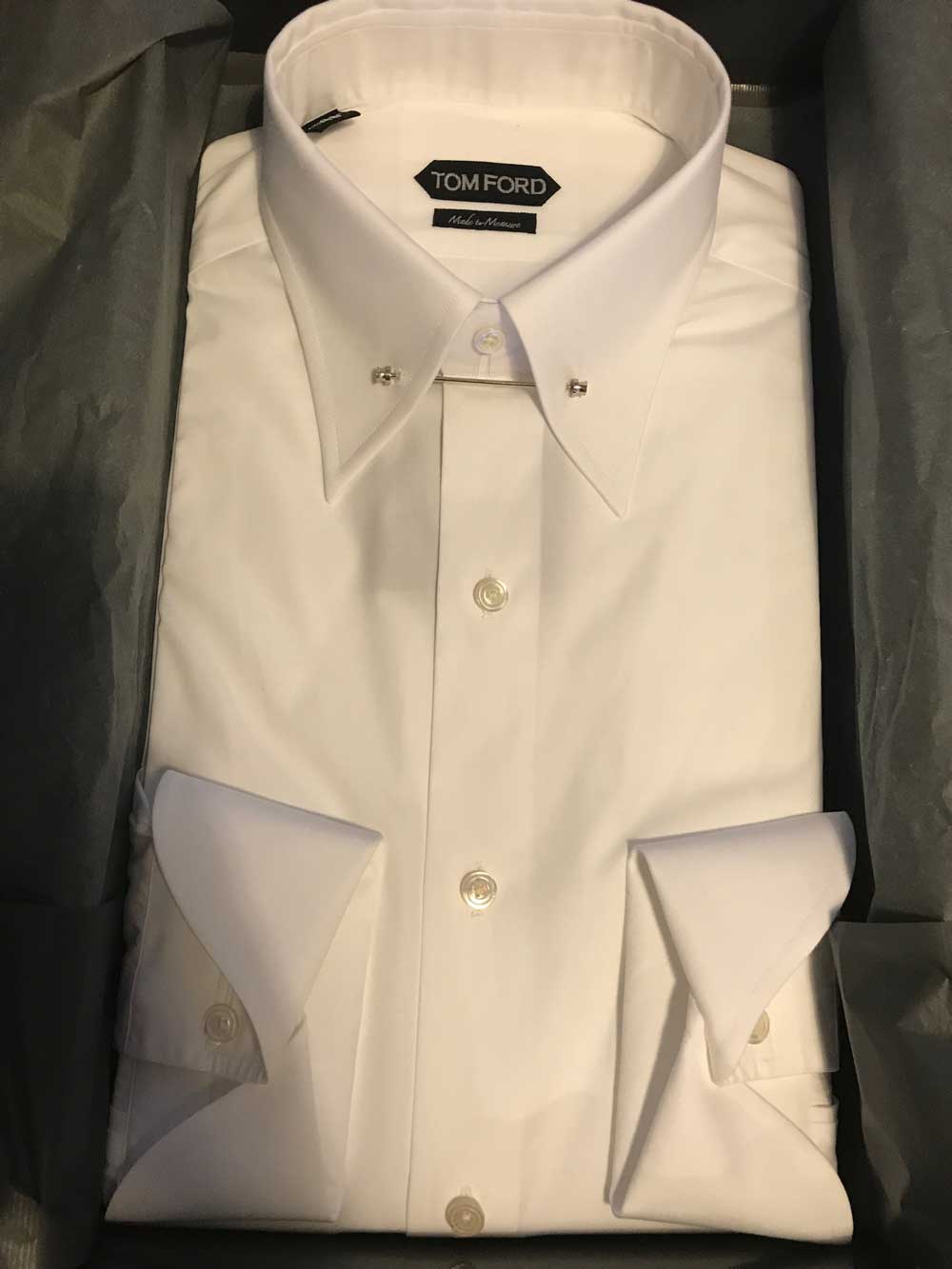 The made for lounge

This lounge had a white sofa in the middle. To the left was a large mirror with a stand in front of it, and a dressing room to the right. To the right of the room has a desk with the collars and cuffs, and all the files on the previous styles. On the walls were some stands with suits all awaiting the finishing touches (number of buttons for the cuffs).

In the fitting room was another large mirror with lights all around it, and another small stand to step on.

This is quite a large space used for private fittings for TOM FORD MTM customers. Like all TOM FORD stores it has the same decoration. My only negative on this styling would be that it is quite dark, and for me can be hard to tell the true colour of an item. I have had to go into Womenswear on occasion, as there is a window which allows natural light it. 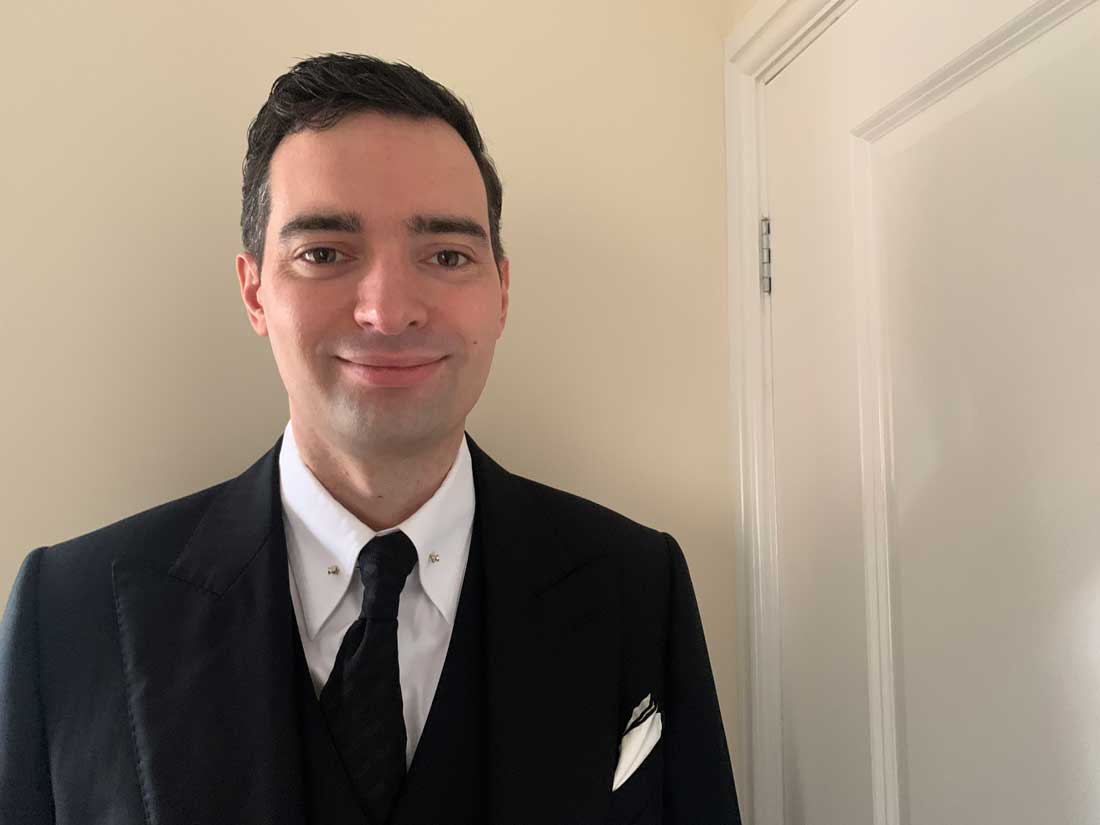 Once I had my measurements taken, I was asked to try on one of the standard slim fit shirts, with my correct collar size. Adjustments were made to the shirt to my measurements and to what I was asking for. For instance, my left cuff was made slightly larger to accommodate the size of my watch, and the shirt was taken in at the waist as I wanted a slightly slimmer fit then the standard slim fit. These were recorded down onto a MTM sheet and then I changed back.

We then went over to the desk to discuss the shirt collar, cuffs and the material. I explained it was the shirt from Spectre, so the James Bond folder came out. We flicked through till we came to this shirt, and a note was made to the shirts reference. Did I want the same material as the screen used? Yes, yes, I did!

I then paid a deposit, maybe 50%, I’d have to go back and check that. And that was it! It didn’t take very long, but all I was after was one shirt. I was led back to menswear, paid the deposit, said my goodbyes to Aman and the MTM specialist and was on my way. 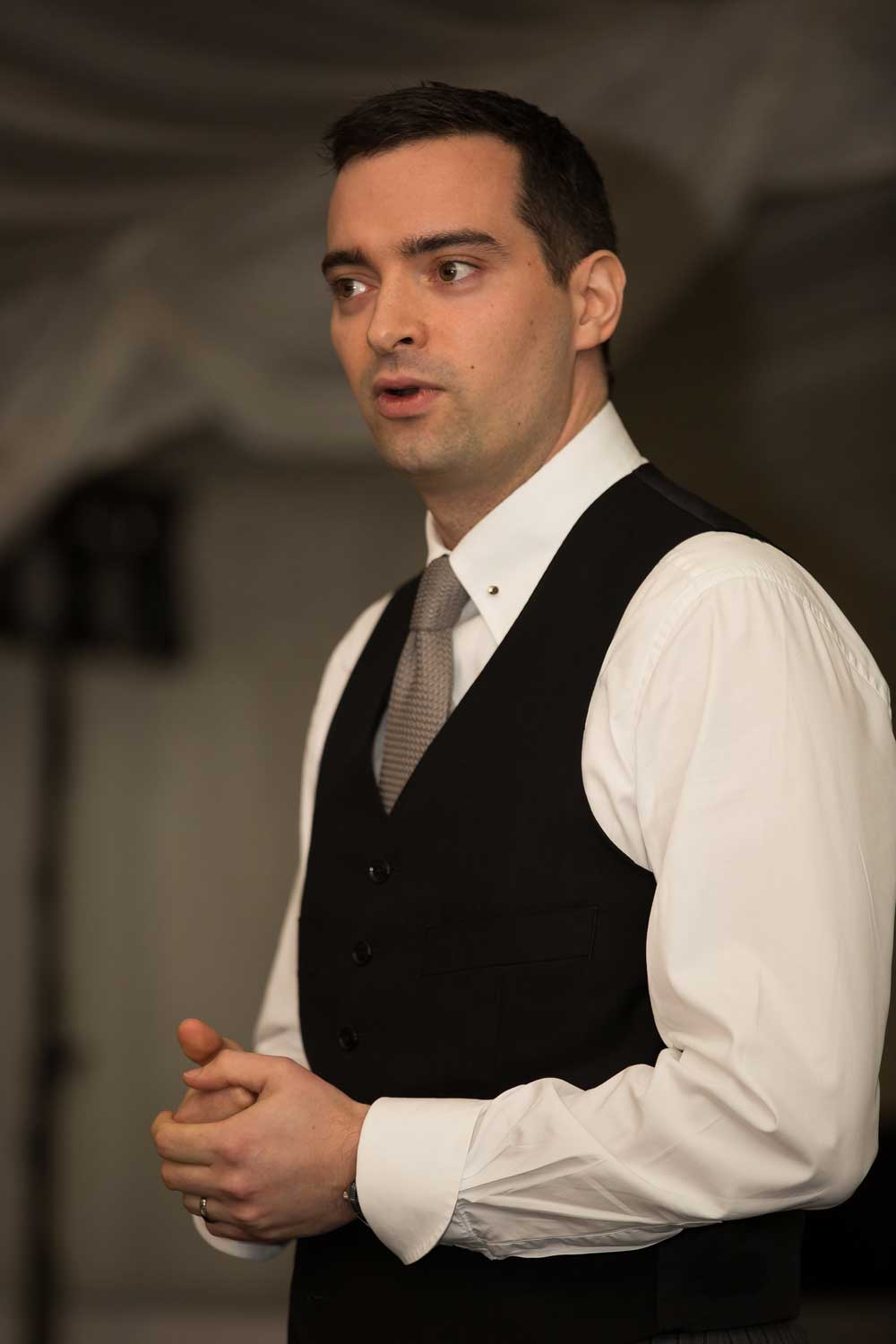 Wearing my TOM FORD Made to Measure Shirt at my wedding

It was mid-August when I received a WhatsApp message from Aman, to say that the shirt had arrived. After a little arranging, I went back to TOM FORD in London in September.

Again, I climbed the steps to Menswear and was met by Aman who showed me the shirt in its shirt box. I was then led back to the lounge to try it on. Once I had I was immediately happy with it. It required, in my opinion, no further work on it. I changed back, and then paid the outstanding balance and then left with my shirt. 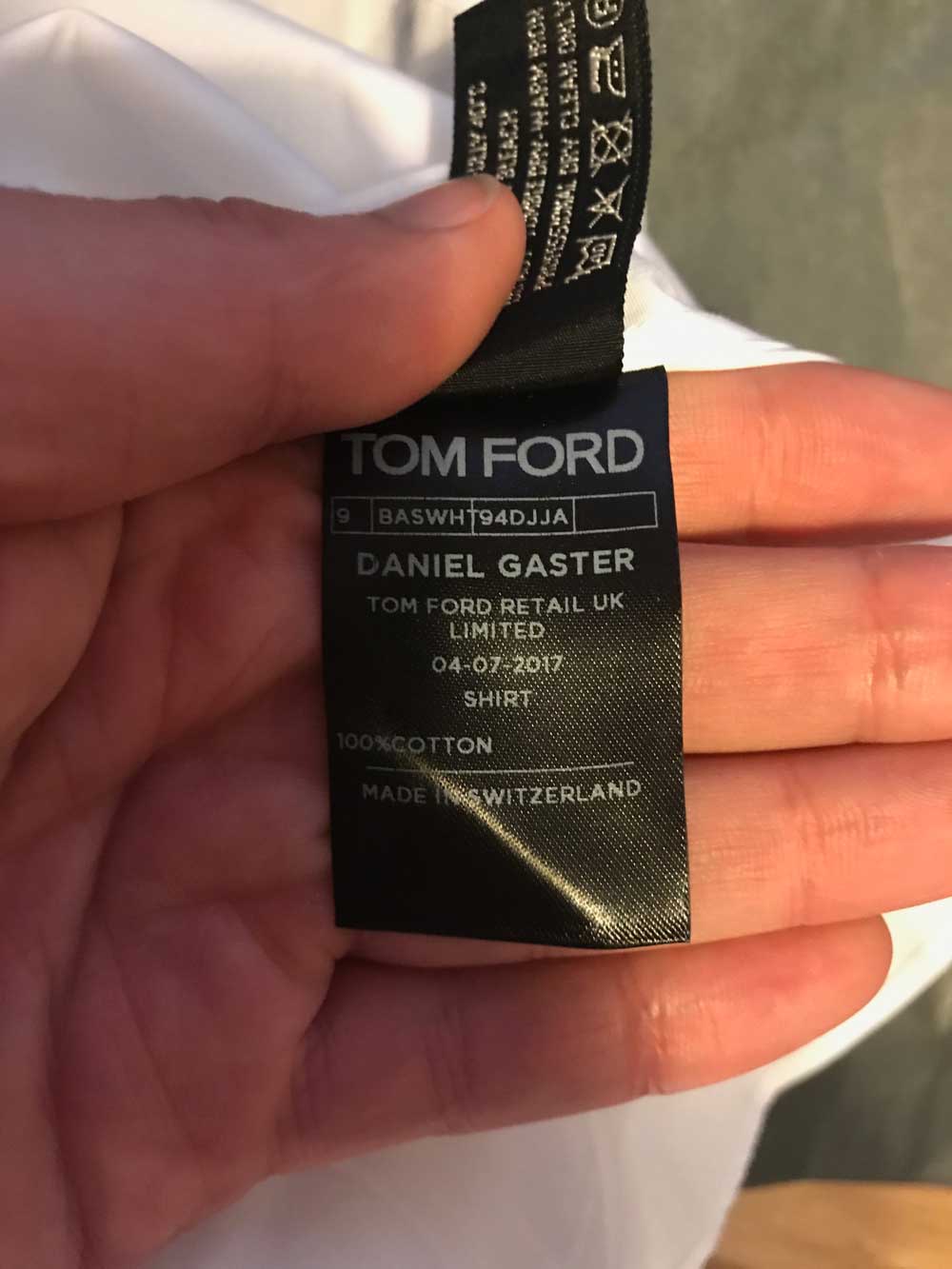 The shirt is a white poplin, it is a slightly slimmer fit than the standard slim fit, with darts on the back of the shirt. The front of the shirt is plain, the placket at the bottom of the shirt forms a triangle, matching the TOM FORD label. The ‘Dr No’ cuff has two buttons with the fold slightly hiding the top button. The gauntlet also has a button on, something I don’t usually bother with. And the pin collar has the eyelet holes and comes with the pin which unscrews on one side.

On the inside of the shirt, you can see under the sewn in TOM FORD label a sewn in Made to measure label. In addition, on the care instructions label is one containing my name, the TOM FORD store I purchased it from, and the date the purchase made on.

The shirt feels really nice, as it is poplin it can be difficult to keep from creasing, but the quality I think is really good. I like everything about it. I love wearing it out. And have done so with different combinations of suits and ties. 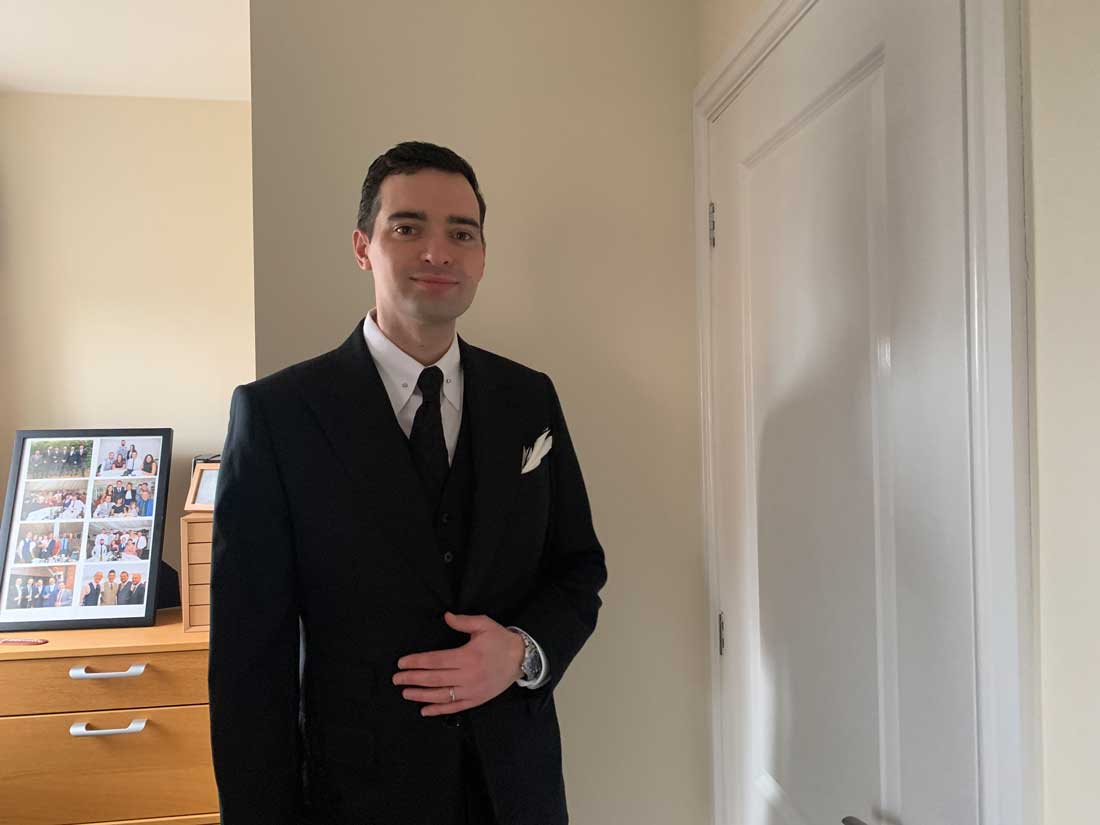 Comments that I get when I do wear this shirt is the about the pin collar, “it unusual” but liked. I think it’s what drew me to this shirt as well. For some it would be the thing that would actually turn them off, it’s not very Bond for them. Maybe that is true, but for me, Bond did wear it and it is something I liked for my own personal style. The pin collar isn’t something I’d get for all of my shirts, but I wouldn’t be opposed to it in the future.

In Skyfall and No Time to Die Bond wears tab collar shirts. When Skyfall came out and I saw them I wasn’t too impressed by them, but having owned this pin collar, I am more likely to see if I am interested in this style. 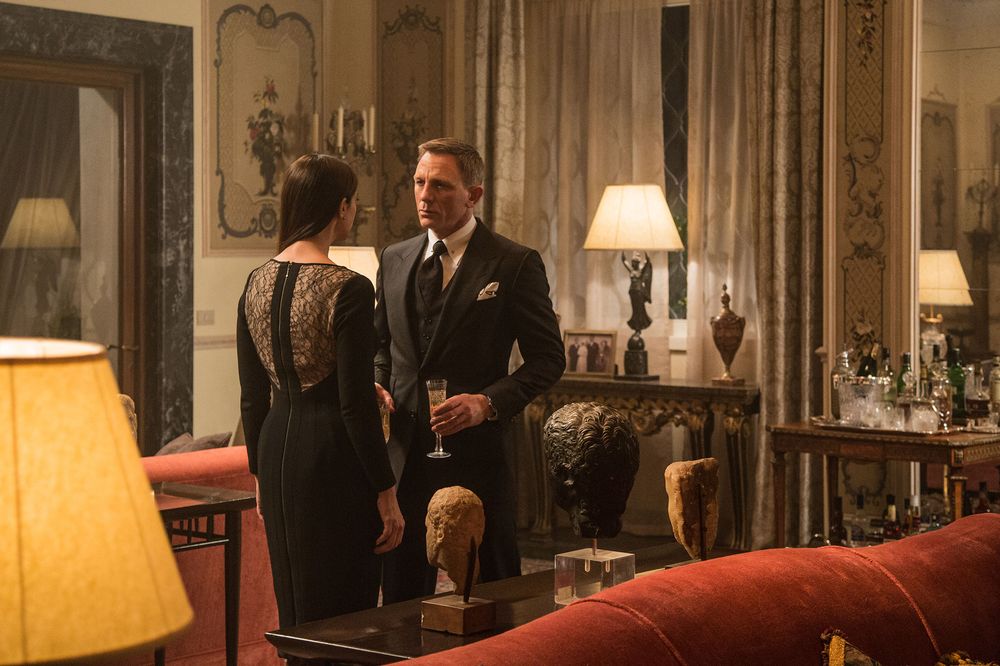 This was my first and so far, only shirt from TOM FORD. About a year later I went back to London store to have another one made; this was for my upcoming wedding. This would have been the Spectre white shirt with the point collar and the double cuffs. However, after being remeasured and going through the details it was revealed that due to the factories summer break that it wouldn’t have arrived in time.

That was disappointing, but I still had this shirt which I wore for the wedding! As with all my items I wear them, and often, so I’ve worn this shirt for special occasions but also just for going to work. 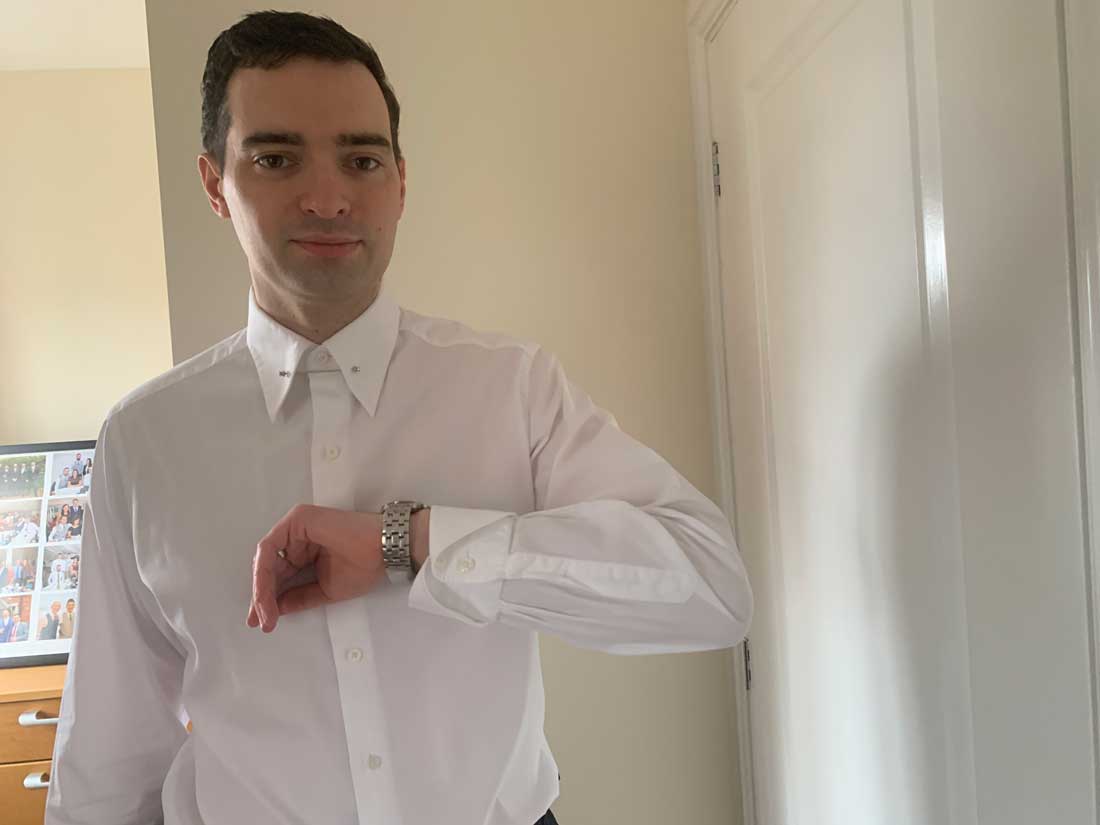 I absolutely do love this shirt, the experience that came with it, and wearing the shirt itself. I do want to mention though that following a wash one of the buttons on the ‘Dr No’ cuff did come off in the washing machine. This was just before the wedding, so was annoyed by this, I did find it in the filter, and was able to get it sewn back in place.

This it wasn’t the sort of thing I’d have expected of a shirt of this expense and quality.  When messaging Aman, he was surprised by this, and wanted to help resolve the situation and repair the shirt for me. If timing wasn’t an issue, I would have taken him up on his offer, but instead had it done locally, I was fortunate that I was able to find the button on this occasion. It is entirely possible that this was a fluke. A 1 in 10000 chance and I was unlucky 10000.

For me, it hasn’t put me off enough that I wouldn’t go again. So, we’ll see. I still want the Spectre shirt I wanted for the wedding, and the new blue No Time to Die shirt as well. 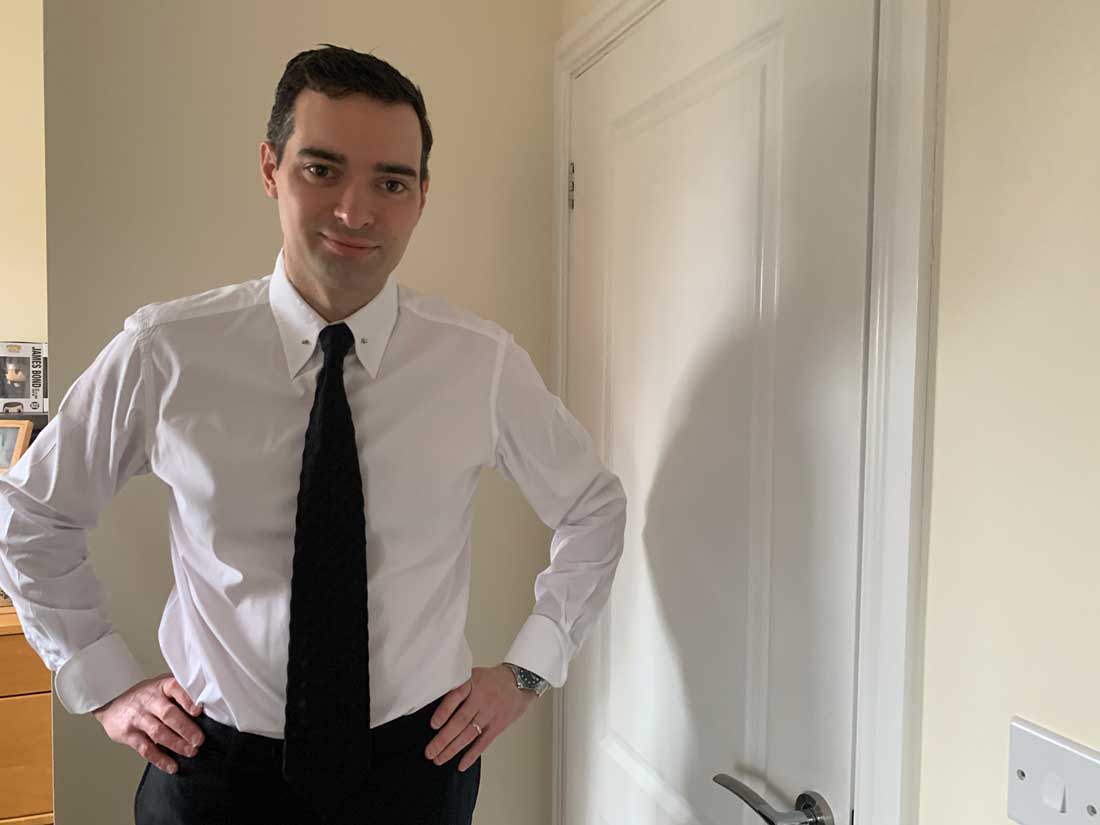 TOM FORD Made to Measure Shirt

For me, yes it has been worth the investment (excluding the disappearing button incident), nothing else has gone wrong with this shirt. I think the shirt has held up well, it looks fantastic still and I believe will do for a long while, and I have worn it so many times.

I’ve since had 4 shirts made from Turnbull & Asser Bespoke service. 4 shirts are the minimal amount for a first bespoke order, but with TOM FORD there is no minimal number of shirts. You can go and get 1, like I have and that can be it if you should you wish. You could however do the same with Turnbull & Asser’s Made to Measure service and just get the 1 should you wish. Frank Foster is also a Bond brand shirt maker, which has a minimal first order of 6 I believe, but I’ve not yet ventured there yet. 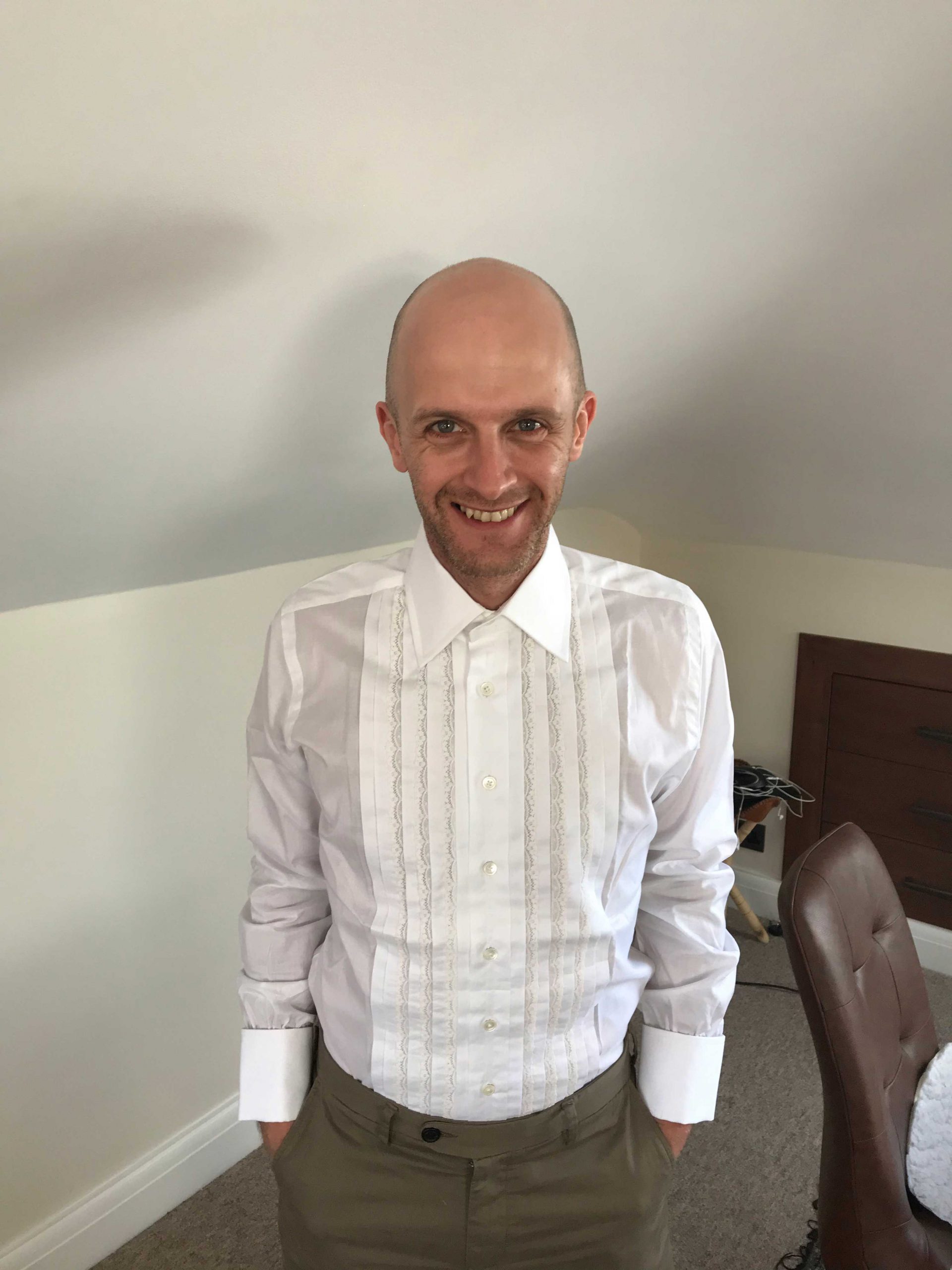 On the whole it could be significantly cheaper per individual shirt to buy through Turnbull & Asser or Frank Foster, if you save up for the first large purchase. Any purchases afterwards can be individual, my T&A ones in Poplin worked out at about £195 each.

For quality against price, I’d go for the Turnbull & Asser, save up for the 4 shirts and then you’re golden. I personally have no experience with Frank Foster but would assume the same would be true of them.

But if you are prepared to pay for the label, or you only want that one shirt, then I don’t think you’ll be disappointed with the experience or the product at the end.

TOM FORD Made to Measure Shirt article by Daniel Gaster. Be sure to follow Daniel on Instagram. All screencaps in this post are the copyright of their respective movie studio and are reproduced here under the Fair Use doctrine. If you’d like more information on a TOM FORD Made to Measure shirt you can check out their website here.