I’m not sure if you know this about me, but I’m a tie person! Over the course of the Daniel Craig era, I have really liked the ties that TOM FORD have made for him.

Bond wears the Blue tie (TF-JB01-D) in Mexico, the Grey tie (TF-JB01-A) in London when meeting M in his office and Moneypenny in his flat, the Navy tie (TF-JB01-B) to meet with Q and the Indigo tie (TF-JB01-C) when on the tour of the SPECTRE base. 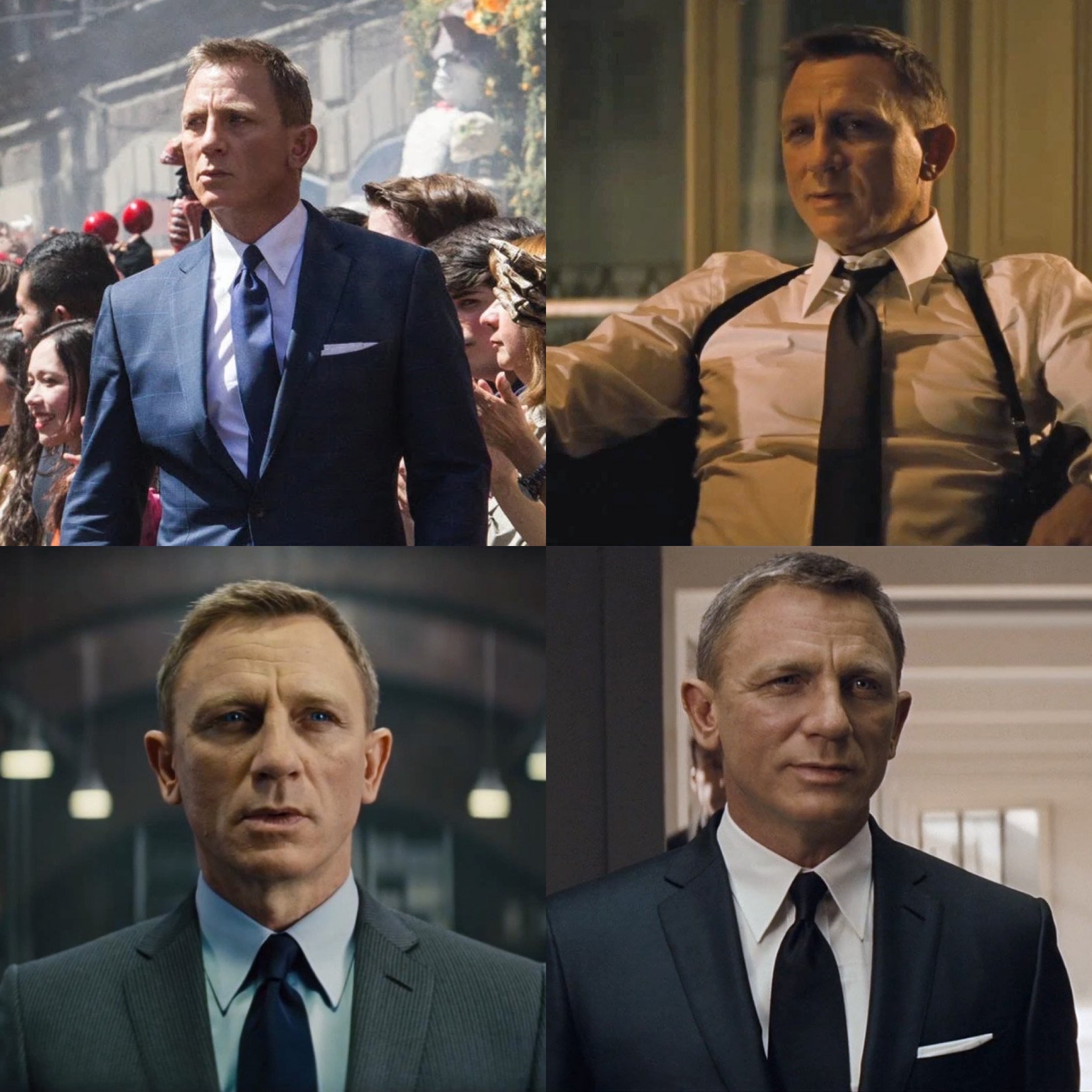 I will review the Rome Black TOM FORD tie separately, as this is a different tie to these four, likewise the Rust brown knitted tie I don’t own, it wasn’t part of the offering for the SPECTRE capsule at the time.

These ties are all plain coloured, 100% silk, 7.5 cm width with an Ottoman weave. They remind me of the Connery days of plain coloured ties, but with a Grenadine weave instead. 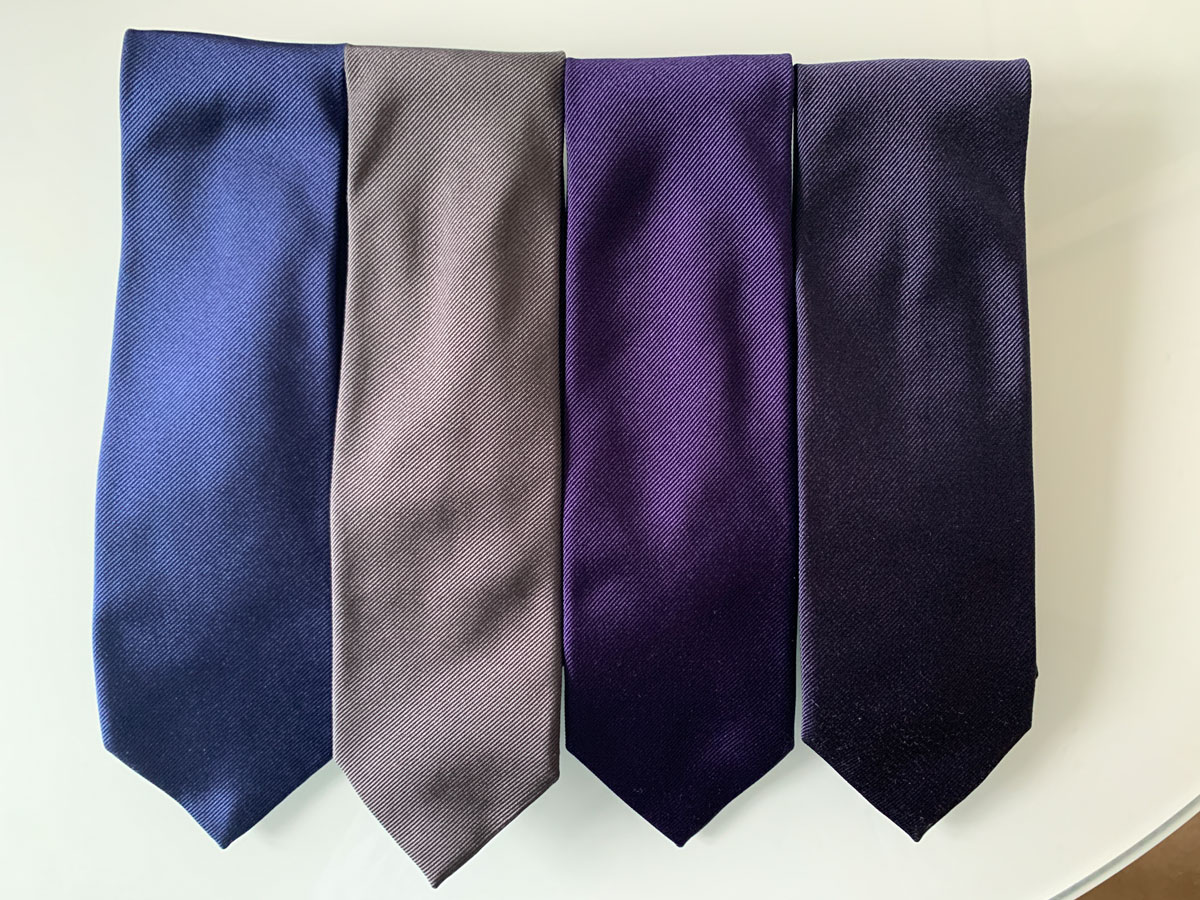 These ties are a little narrower than the ties TOM FORD normally produced at the time (I think they were 8-8.5 cm widths, with the exception of their knitted ties.) I’d also note, that the Navy and Indigo ties are a very similar colour. It is hard to tell the two apart.

In this case I believe the Indigo is a touch darker than the Navy. In my mind I think an alternate colour would have been better than two so similar. I would have chosen a Burgundy red instead. 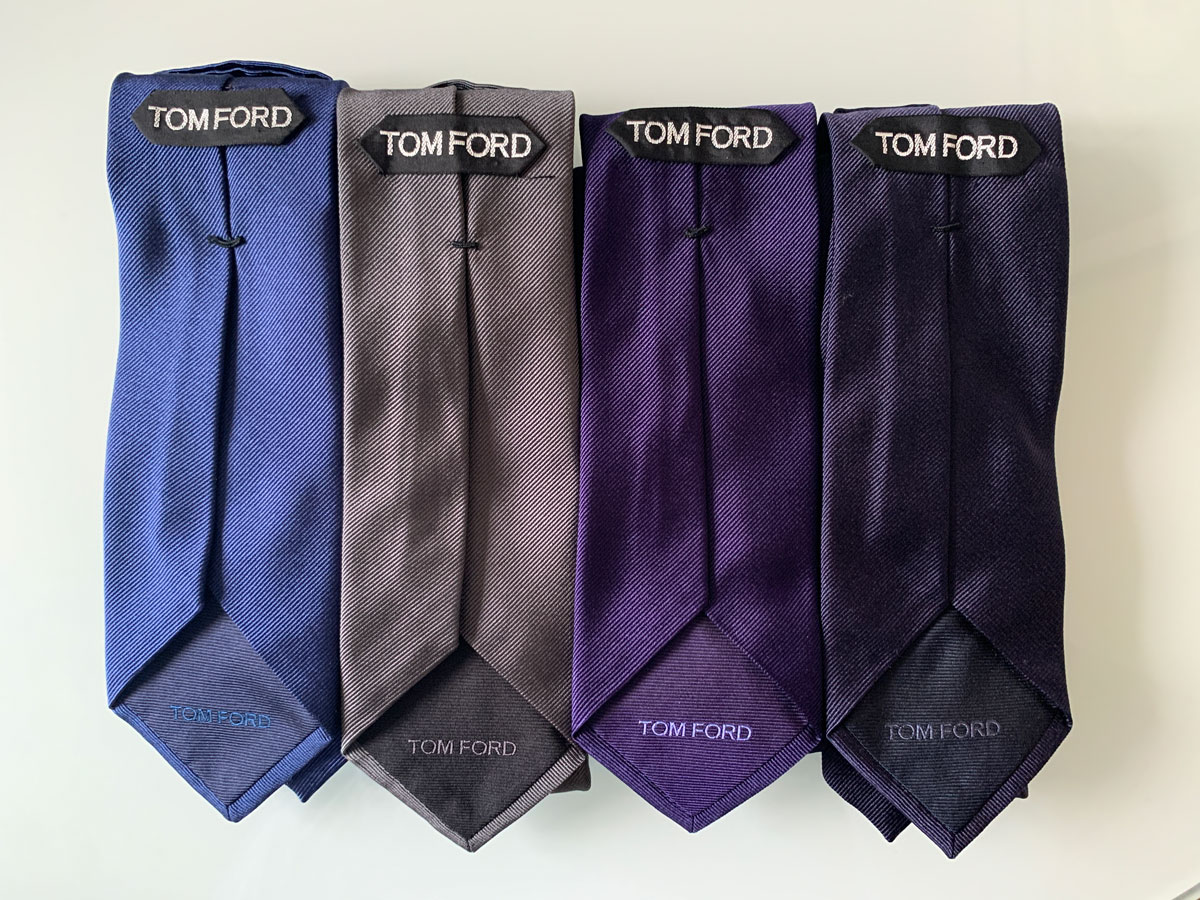 These ties look really good when worn. As they are narrow, I wouldn’t choose a large knot for them, a simple ‘four in hand’ knot would suffice.

I only wear white and pale blue shirt for work, so any of these ties work with them. However, as they are plain coloured ties they could work with a variety of different colours or patterns. Indeed before Lockdown I even started adding a tie slide to them on occasion.

Images of the TOM FORD Spectre ties were being released. I was slightly disappointed that they were plain and not subtly patterned as they had been in Quantum of Solace and Skyfall.

I liked the subtle patterns that were used in the ties, they didn’t distract so much as the ties that Pierce Brosnan wore did (although I still oddly like The World is Not Enough square tie from Turnbull & Asser). 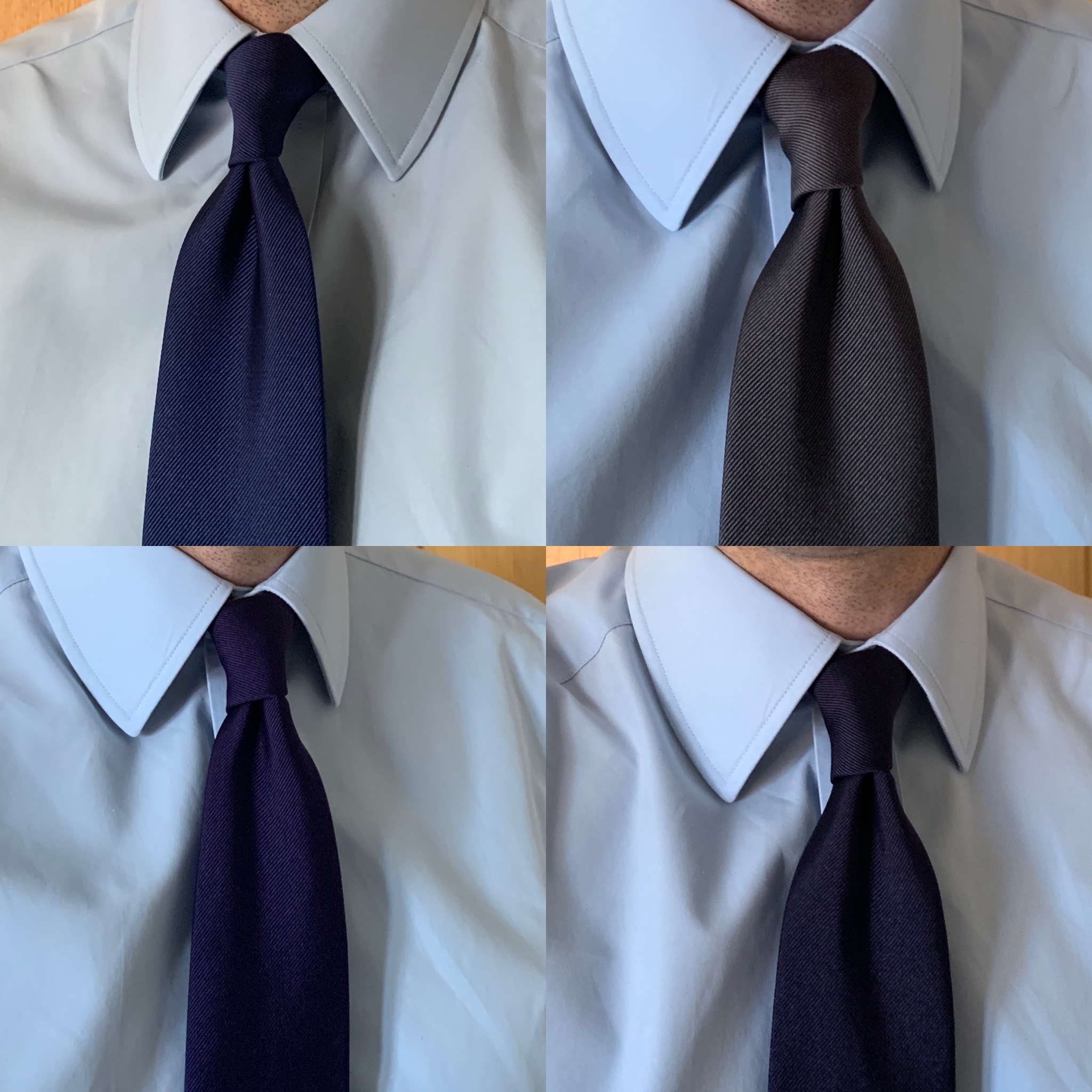 Where are the Bond ties?

When Spectre was released this was my first opportunity to get the screen accurate ties from TOM FORD. For the previous films there wasn’t a TOM FORD store in the UK, you would have to rely on Harrods or Selfridges.

When Quantum of Solace was released, I wouldn’t have been able to afford the ties on offer, and as I understand they would have been difficult to acquire. With Skyfall, when I was able to visit London, I tried in both Selfridges and Harrods to get a tie. However, the only “Bond” ties that were available were not used in the film.

When visiting London in the Summer of 2015, I visited the TOM FORD store on Sloane Street. They had a sale on I was purchasing some ties (I told you that I was a tie person right?)

I got talking to Darius, about the film, and he told me about the capsule, that none of the items had been released yet, and if I wanted to be put down on the list for the launch event? 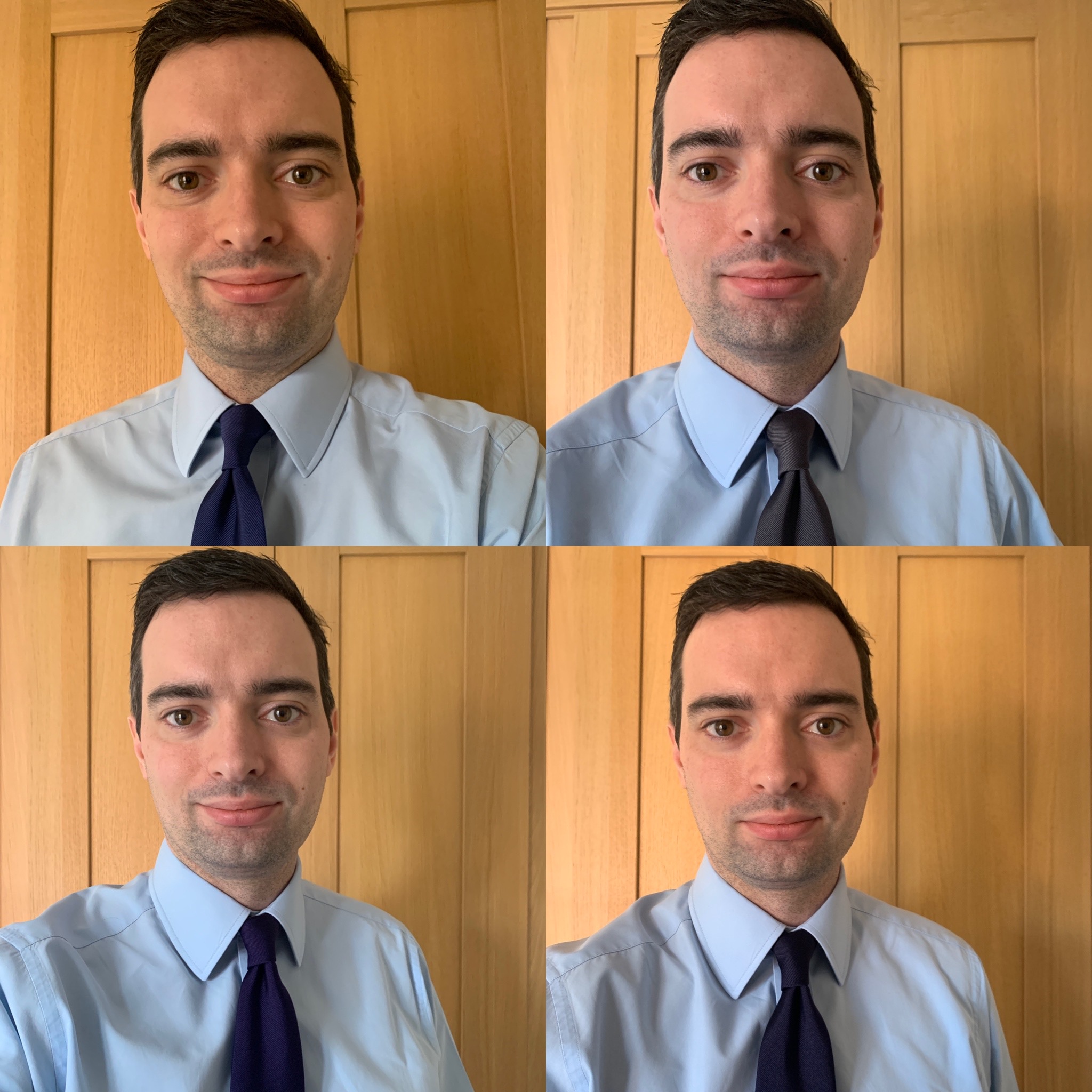 Darius to the rescue

I was unable to attend, but I kept in touch with Darius and he kept me apprised with the details. Thanks to Darius I was able to get hold of the items I wanted before the film had been released.

In 5 years since bringing them home, I’ve worn and re-worn these ties so often that you’d think they’d be falling apart by now. Yet there is no sign of this. There is no damage as far as I can tell.

I do try to put a dimple in my ties when I tie them, and although after a day of wearing them it can still be seen once removed, I hang it up to allow the creases to fall free, so the next time I wear it they’ve disappeared.

As these ties were part of a limited capsule they are no longer available. However, if you are interested in purchasing them, then maybe keep an eye out on the AJB007 forum. Under the “For Sale or Trade” section I have in the past see members putting these ties up for sale.

As for me I’m keeping hold of them. I love them, and will be wearing them again soon, once I can return to an office!

BLENHEIM PALACE – FACTS ABOUT THE FILMING OF SPECTRE

You can review the Tom Ford Spectre Ties and the entire Tom Ford capsule from the film here. (Article by Daniel Gaster).