The magic of the James Bond community in it’s truest form, is making things like this happen. 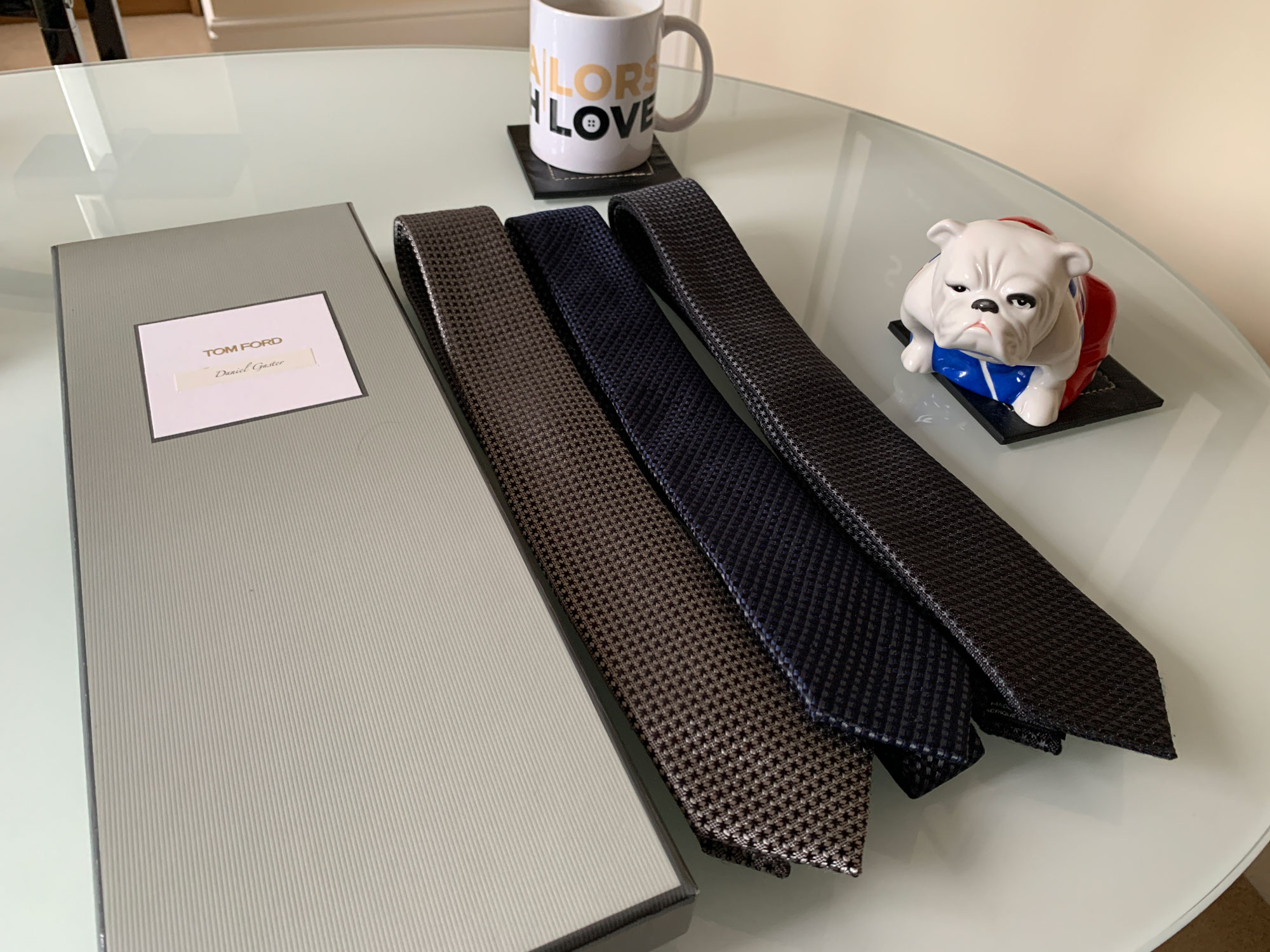 Having missed out on the first run of the TOM FORD Harrington jacket and the Spectre brown knitted tie (and by missed out I mean discovered too late), I was eager to get my hands on the Skyfall ties. In this project three of the four TOM FORD ties were being considered.

The first tie is the black and silver check tie that James Bond wears in Istanbul at the start of Skyfall, with a light grey sharkskin suit and white shirt.

The second tie is the Square Check in blue and alternating black and light grey which Bond wears to see M following his training. He wears this with a mid-grey and black glen check suit and a light blue shirt.

The third and final tie in this project is the charcoal and light blue grey check tie (same pattern as the black and silver) which is seen in London when Bond is chasing Silva, and on route to, and arriving at Skyfall. Bond wears this with a charcoal and narrow spaced light grey stripe suit and light blue shirt. 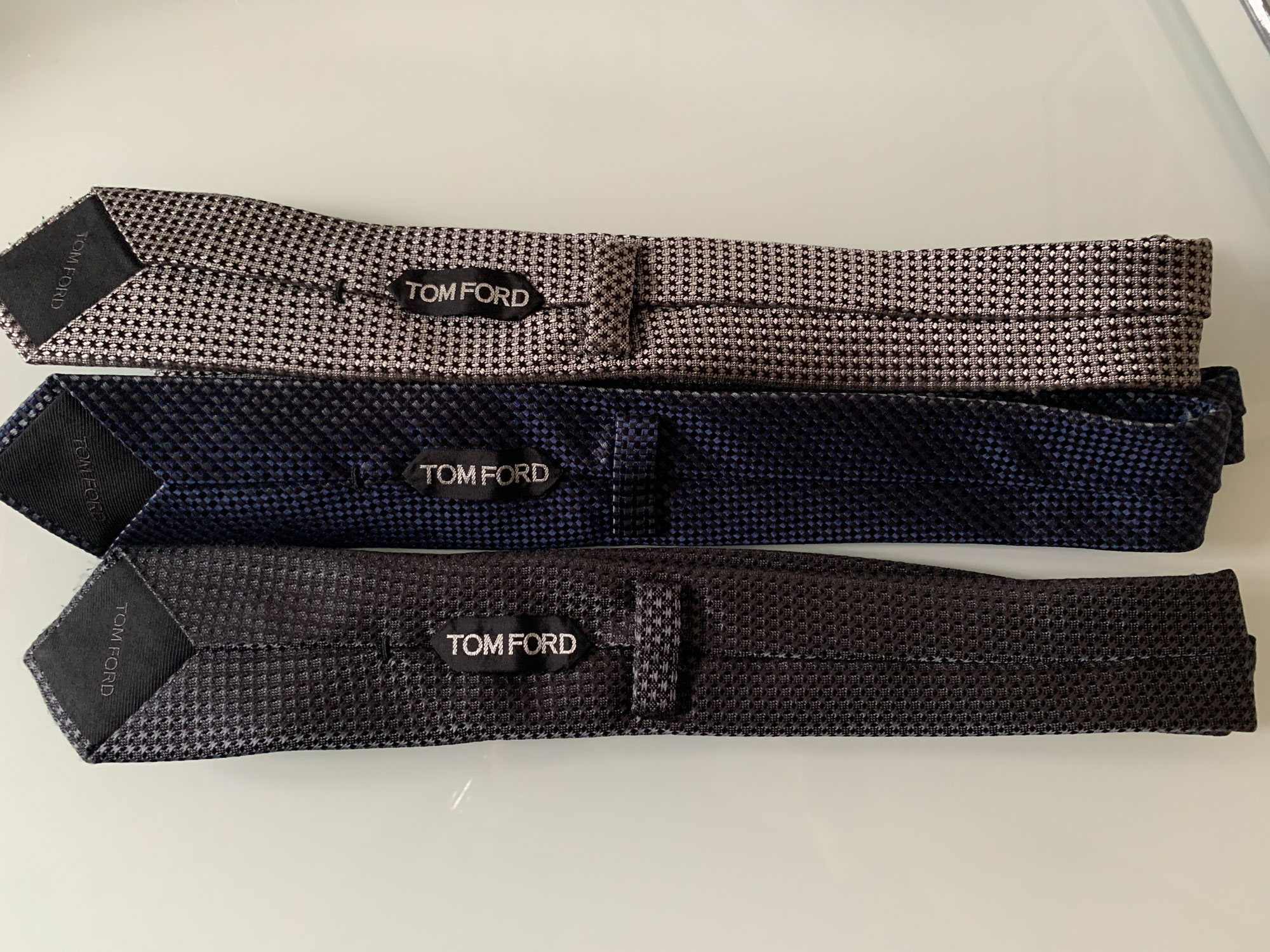 When Skyfall came out, I was in a position where I could afford some of the sartorial items from the film. TOM FORD at this point didn’t have a UK store (this didn’t open until July 2013) so the only available stores (to my knowledge at the time) were Harrods and Selfridges in London.

When I went to look for the ties, I couldn’t find them. There were “James Bond ties” that they had, but none of them featured in the film.

When the London store did open, I went and asked about the ties. At this point they didn’t have any, but I did end up buying my first TOM FORD tie, a light and dark grey basketweave tie.

I even tried in the New York store when I went for my 30th Birthday, again no joy. I knew it was a long shot given it was 15 months following the release, but it’s always worth an ask.

You never know what they might have in the back.

I did get my second TOM FORD tie a blue and Navy basketweave tie (same pattern as my first). I treated these as close enough to the Skyfall ties, I was really after, but had little hope of now finding.

I’ve since bought TOM FORD ties which I think would be appropriate for Bond and I am extremely happy with the quality of these ties. 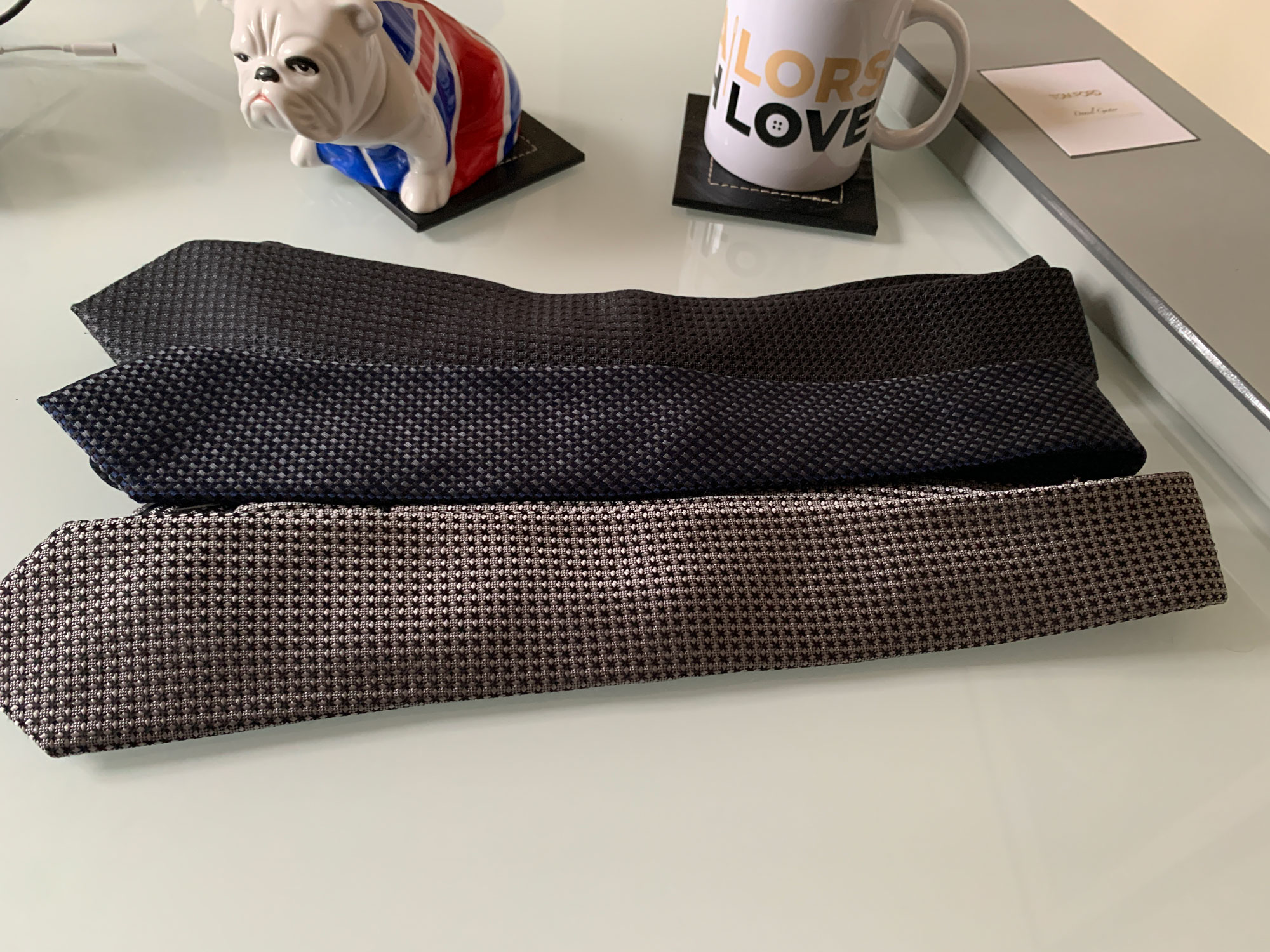 I don’t know if this project was a second chance, as in reality I never really had a first? When I read about the project, I knew I had to have them. Especially the grey and black tie from the Pre-title sequence. The project was announced in July, setup and organised by 007JBDCMWR and I was signed up in the August.

And then I waited. Waited for the figures for each tie to increase until each one reached the required goal (around 50 per tie). Once that happened the design team then looked at the originals (which were loaned by Jarednomak and Welshboy, members of the AJB007 community).

Orders of materials, samples produced, and verified and then in January 2019 is was given the green light.

By the middle of March, I was contacted by Luigi from TOM FORD from Milan for payment of the ties, and then I continued to wait. It would be the middle of June that I would finally receive them. 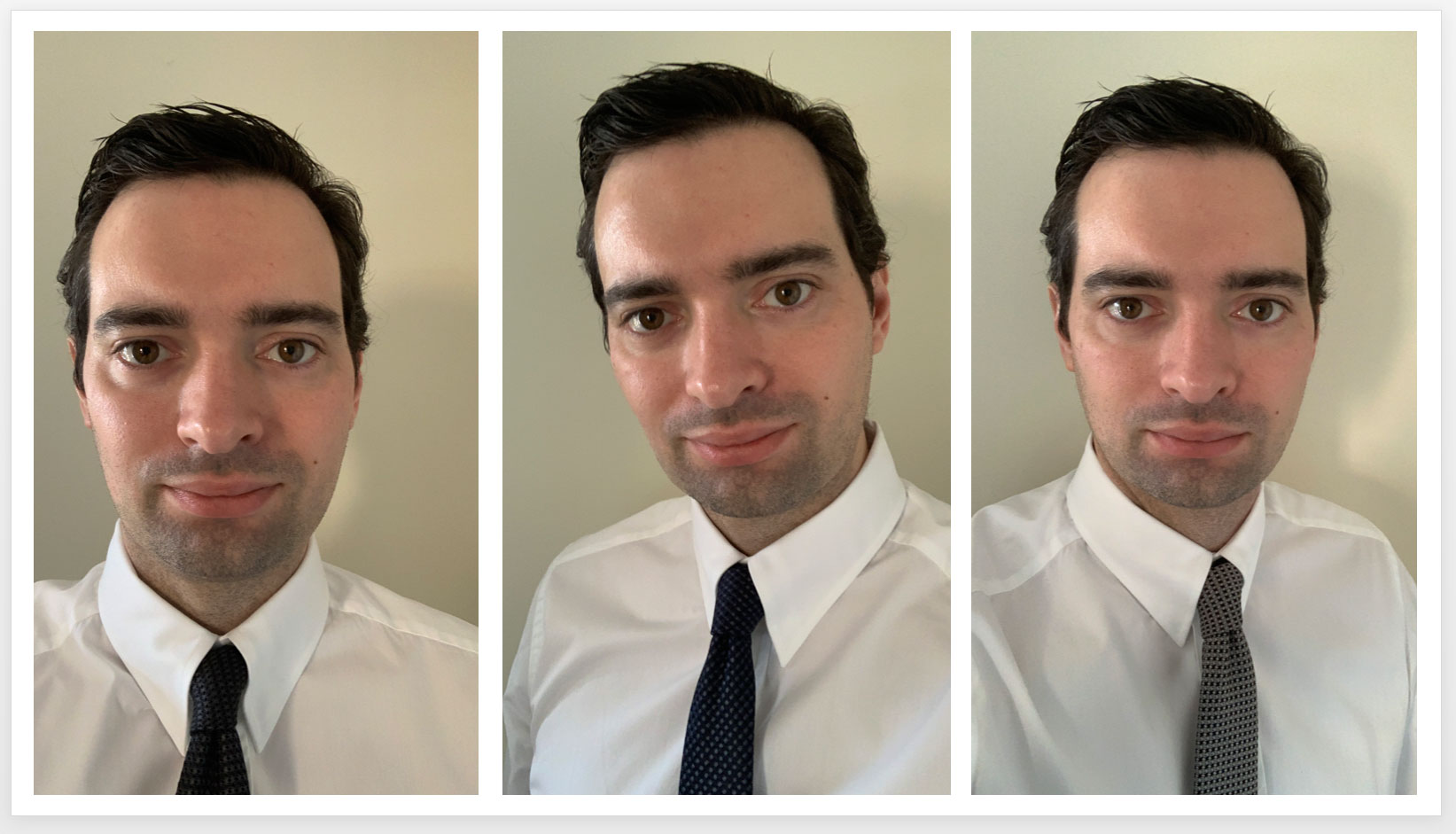 All in the detail

The ties are beautiful. They are slightly narrower than the standard ties worn in Spectre, which are quite narrow. They tie very well in a Four in Hand knot, as they are narrow. I wouldn’t tie them with a larger knot then this.

On the reverse the TOM FORD label is stitched vertically, rather than horizontally. This is the same as the originals. The only difference (I assume) to the originals, is the tipping which has the TOM FORD logo on (like the Spectre ties). This wasn’t something they did before 2015. None of the TOM FORD ties that I bought following Skyfall, but before Spectre had this.

As with my other TOM FORD ties, the creases produced from the knot (and dimple) fall out when hung up.

Like the ties from Quantum of Solace, the patterns are subtle and not overstated, but in some ways, I think they really do pop. 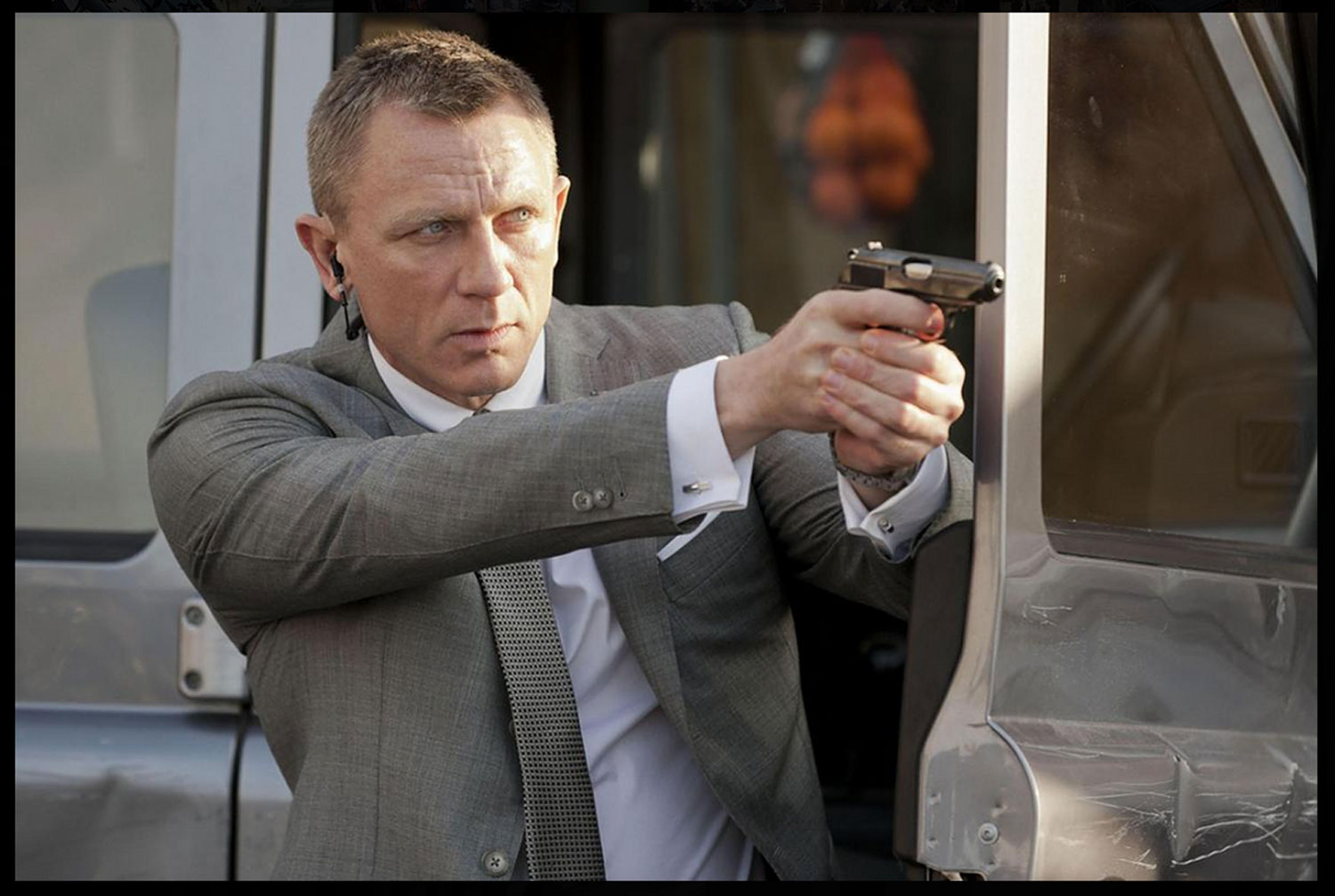 This is especially true of the Black and Silver tie. I remember watching Skyfall for the first time and throughout the film, I was thinking how much I liked that first tie. I’m so glad that I now finally have it.

In natural light the silver in the tie does stand out, really showing off the pattern. It is an interesting, neat cross or star pattern produced by the weave. Matt Spaiser of Bond Suits really describes this well, comparing them to the Grenadine ties that Connery wore.

A full interview with the Costume Designer for Skyfall and Spectre, Jany Temime, can be found in the book From Tailors With Love: An Evolution of Menswear Through the Bond Films. 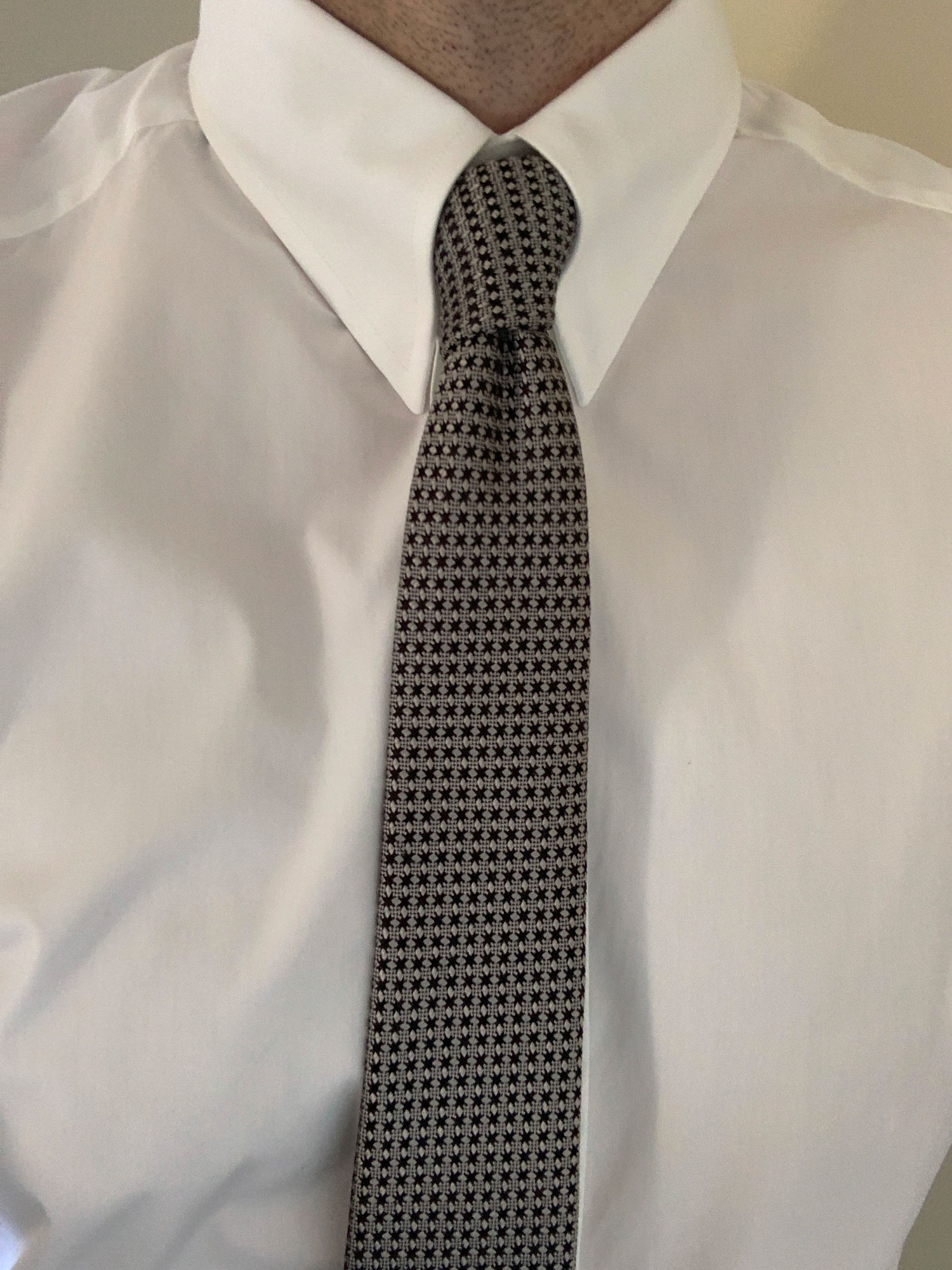 This tie is seen in Istanbul at the start of the film, where Bond is trying to retrieve a hard drive taken by Patrice, with a list of undercover agents on.

The Briefing with M tie 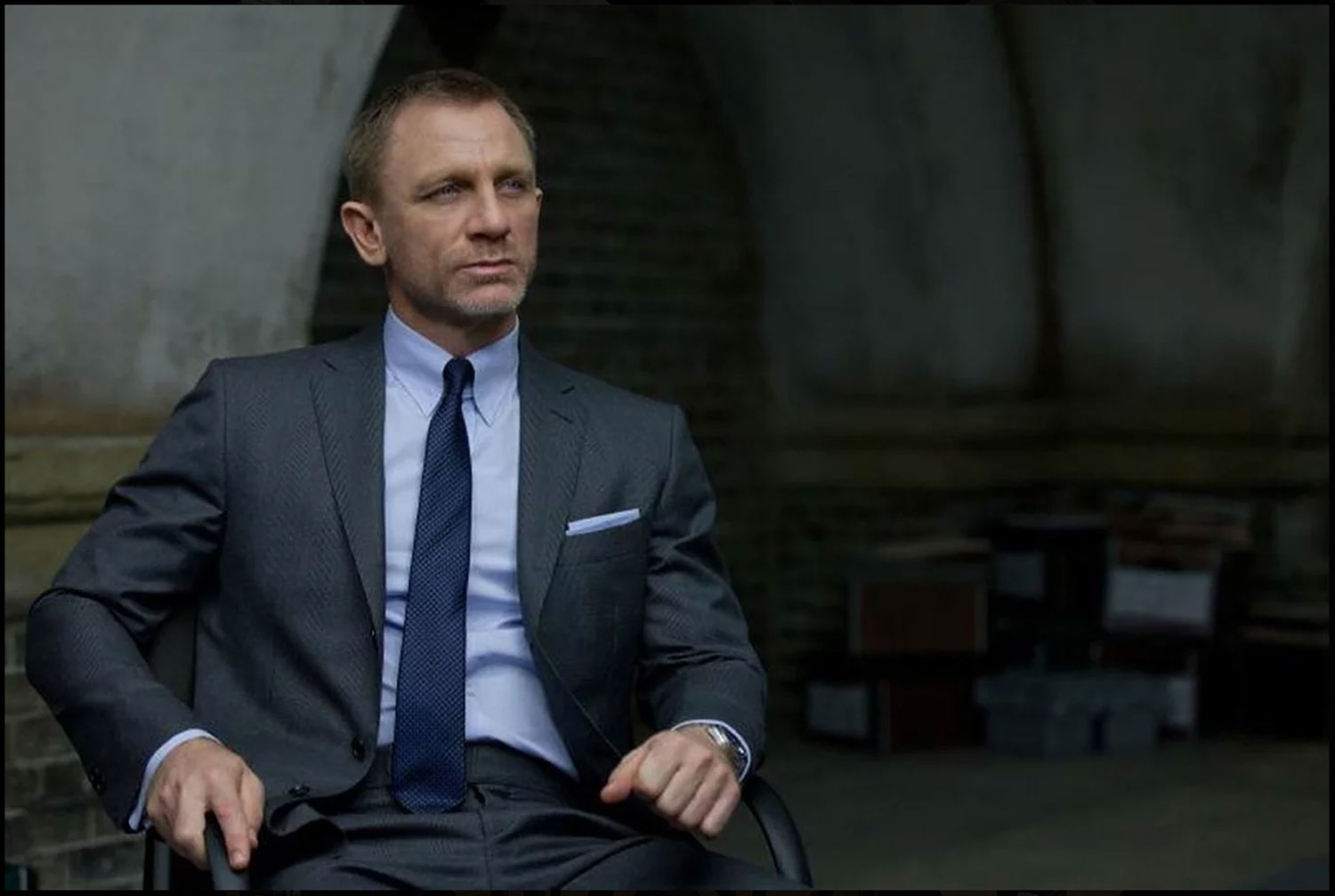 The tri-colour tie looks fantastic, it is the most subtle of all three, in my opinion. This tie was getting a lot of love, and I have to admit that now I have it I can see why. It is a wonderful looking tie which I think pairs well with everything. It’s very simple in its design but I think provides an elegant pattern and the light grey really stands out. 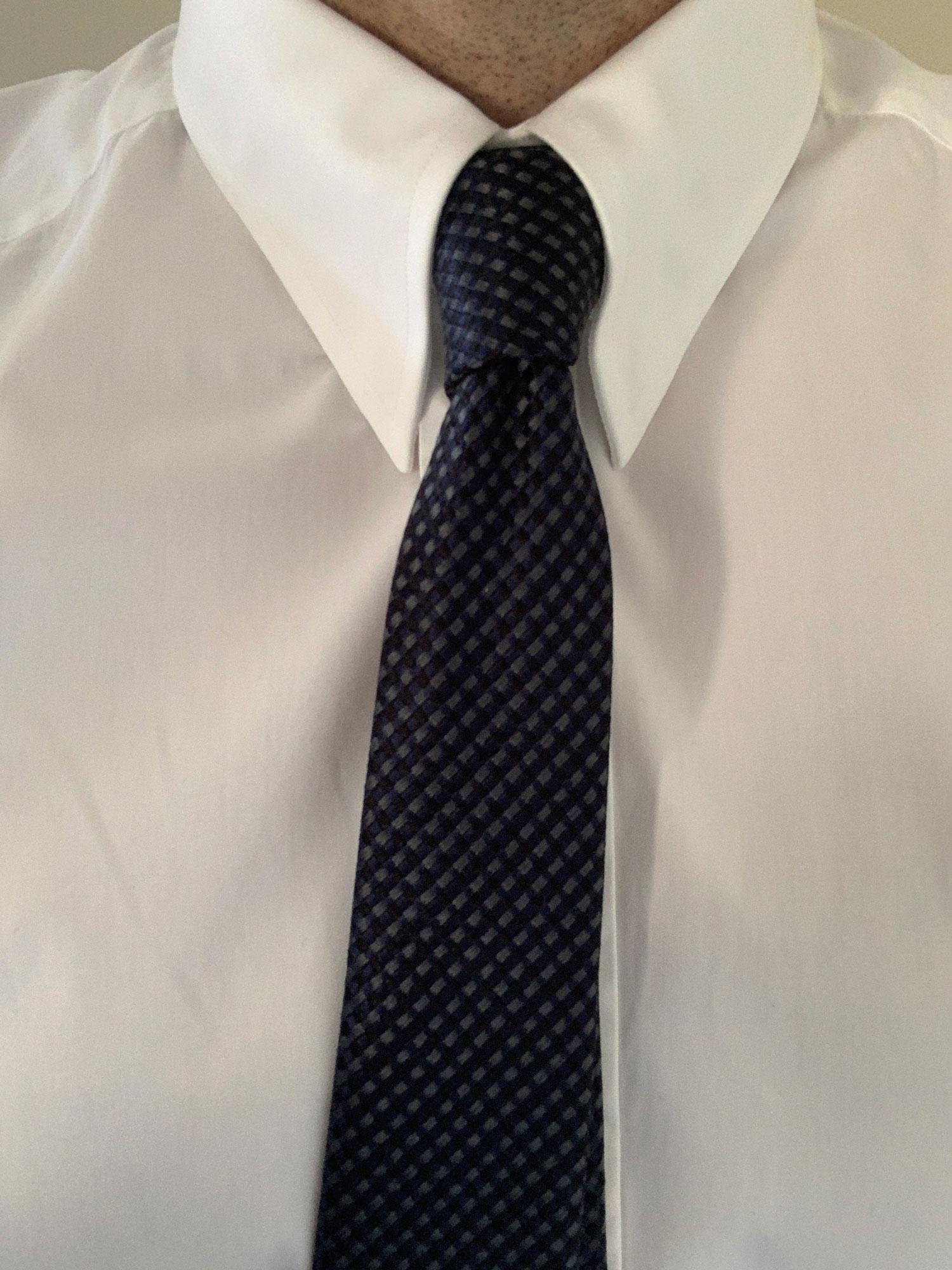 This tie is worn in London, during Bond’s briefing with M and then after at the National Gallery to have his first meeting with Q. 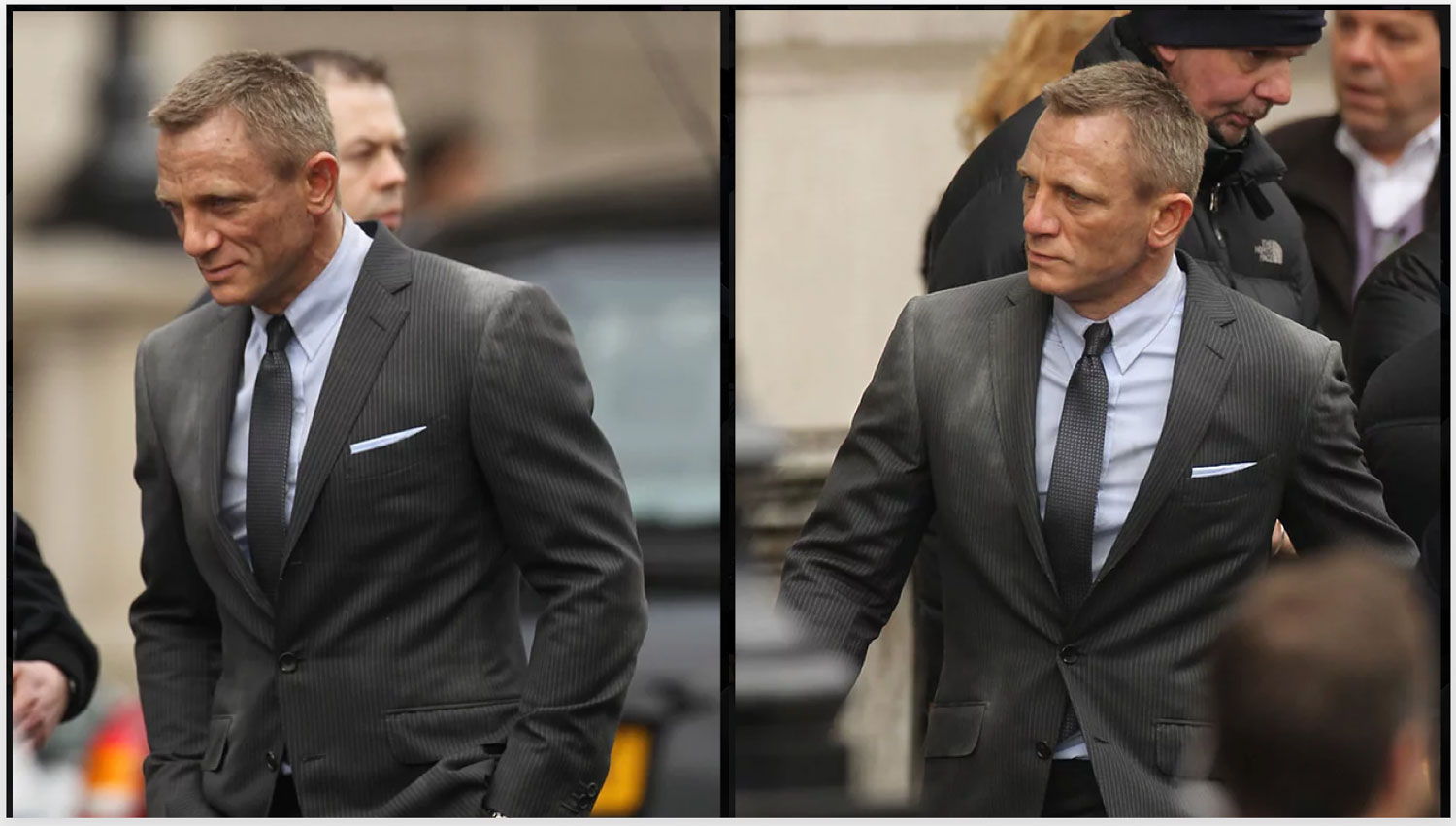 Check out the pattern

The Charcoal and Blue tie sees the most amount of screen time. Although it is the same pattern as the Silver and Black, the Blue (in place of the black) stands out more than the Charcoal (in place of the silver). This gives the tie a different look, even looking at them next to each other, it’s like an optical illusion. I see this as being more of a check pattern, as with the Silver and Black I see cross pattern. 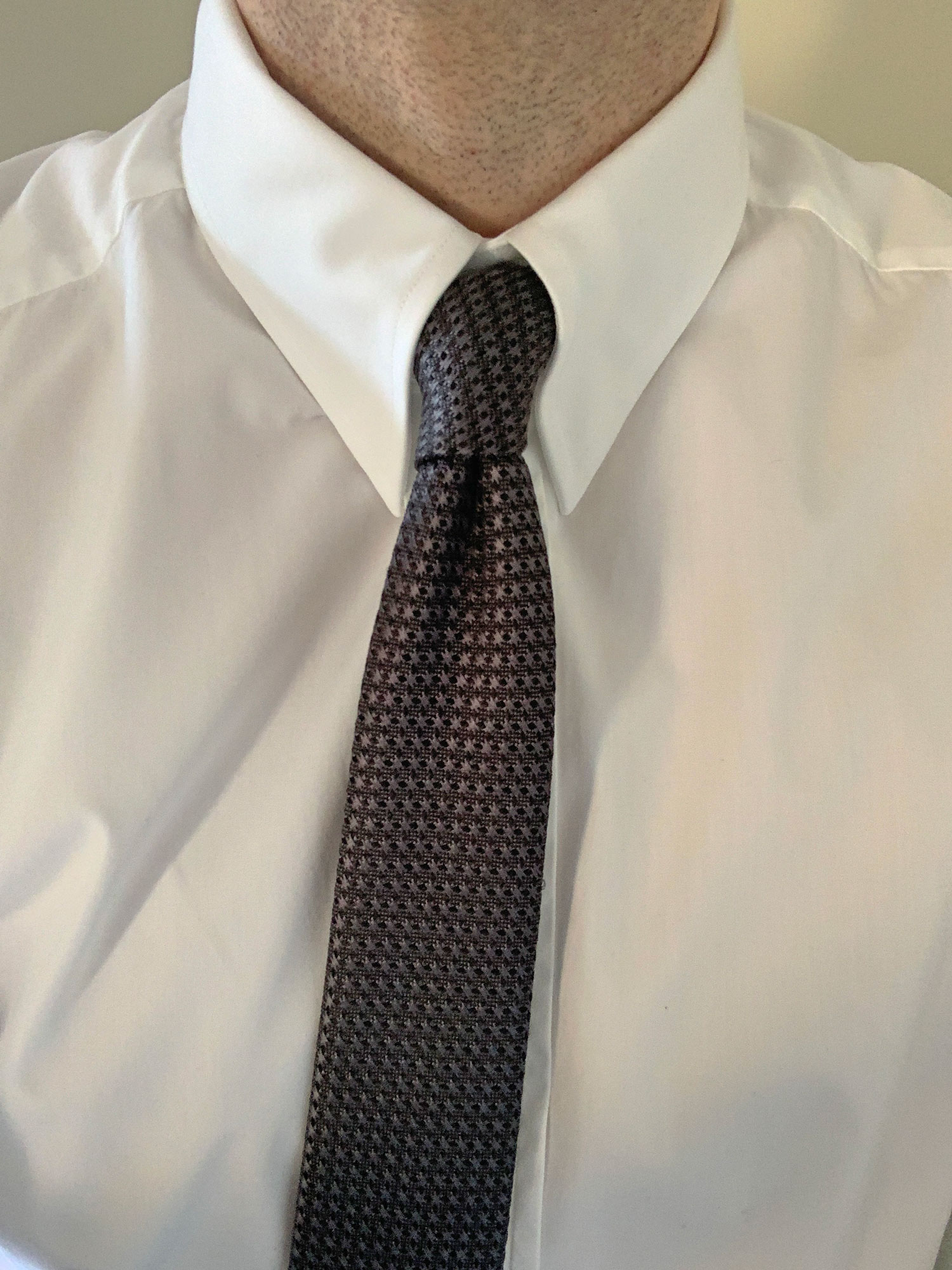 This tie is seen in the MI6’s new digs after catching Silva, the London Underground, around Whitehall and then arriving at Skyfall.

I’m very happy to have these three amazing ties. It is my hope that the fourth Skyfall tie will be produced as part of some future project. For now, due to the pandemic there are no projects advancing. Which is understandable. Hopefully the projects that were making some headway will restart, and give some opportunities for us to get some these amazing, beautiful items. 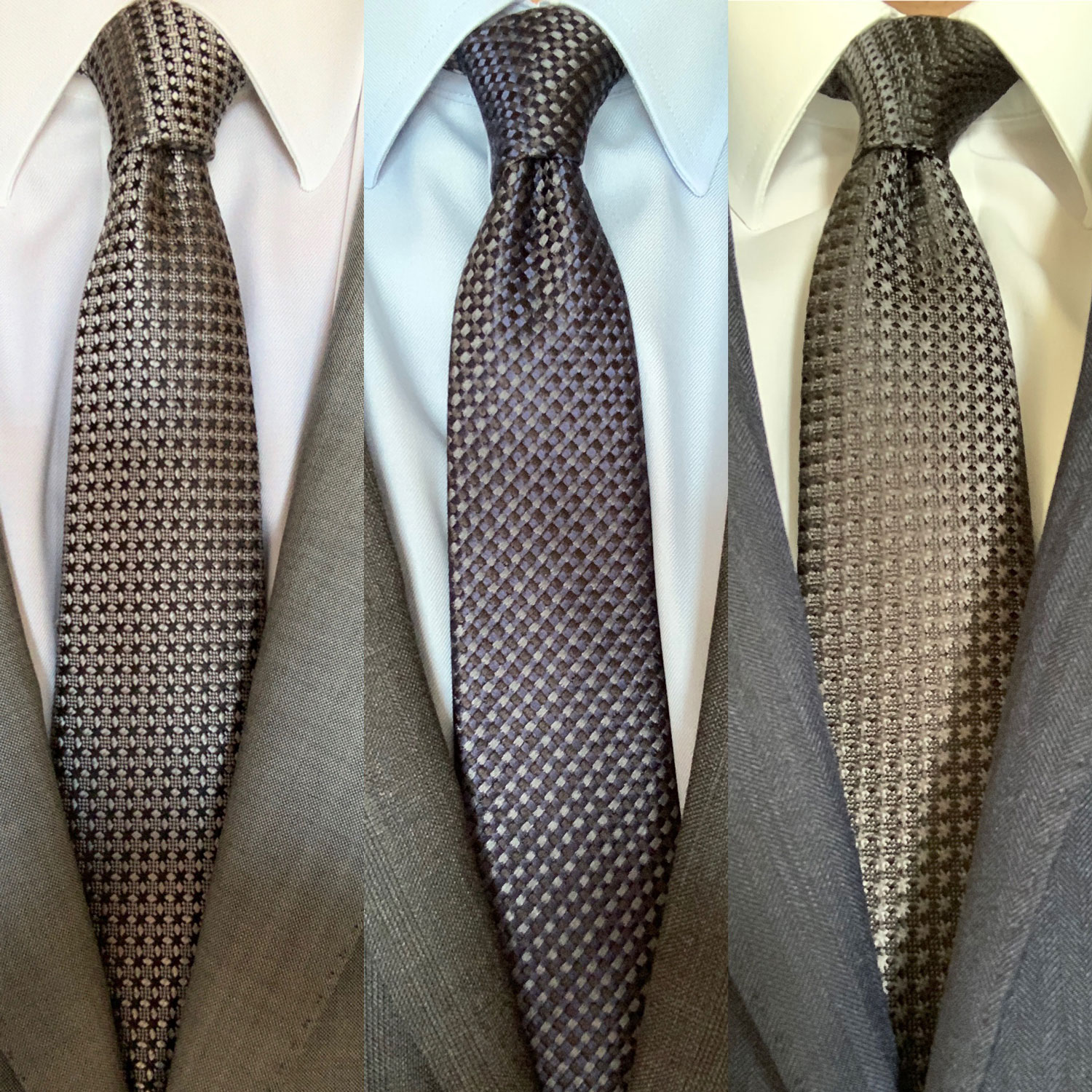 The descriptions of the Skyfall ties I’ve taken from Bond Suits.

Photos of Daniel Craig as James Bond taken from Thunderballs the unofficial James Bond picture archive. Used here under the fair use doctrine.