The World is Not Enough – The Georg Jensen #88 cufflinks | Review

The Georg Jensen #88 cufflinks from The World is Not Enough 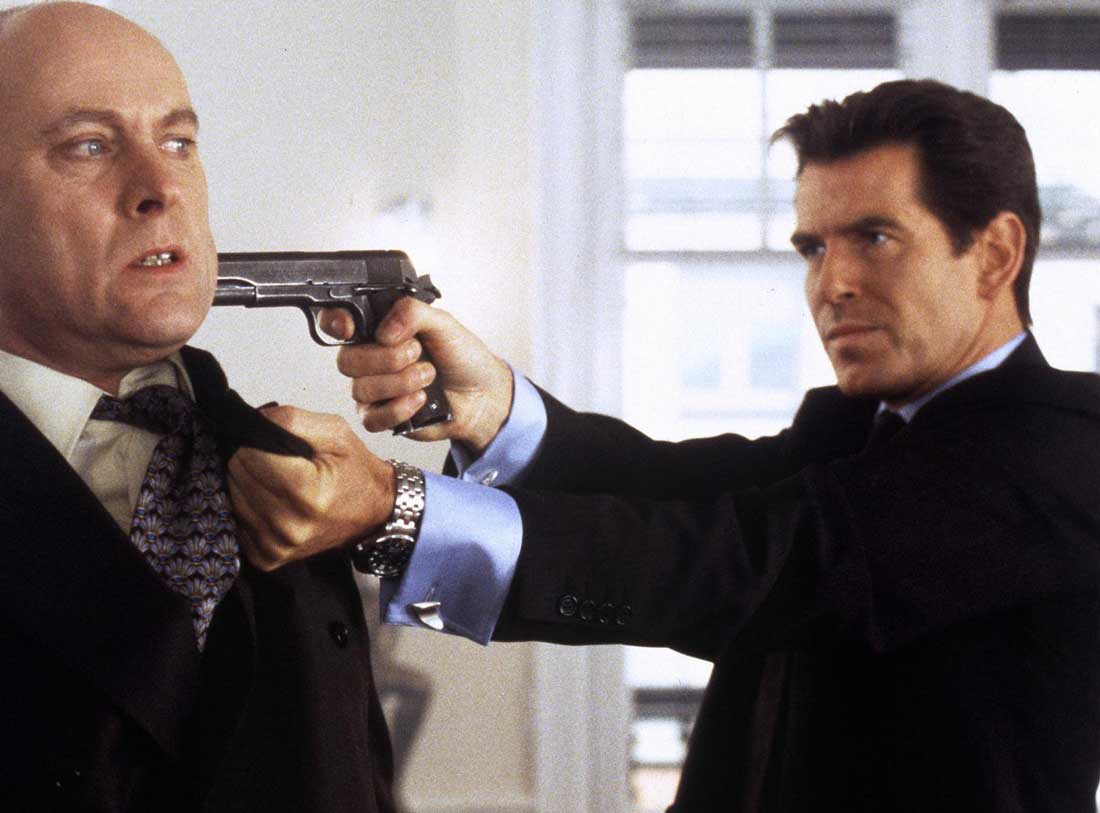 Outside of the iconic Goldfinger 3-piece suit or various tuxedos worn over the 24 film run of James Bond, it is probably safe to say that the outfit worn in the Bilbao sequence of The World is Not Enough would otherwise rank fairly high with many Bond sartorialists. In this film, the Brioni suits seem to find the right balance in terms of classic proportions, and perhaps more so than with the other Brosnan films, costume designer Lindy Hemming pays homage to the early Connery look with many of her stylistic choices.

The details of the various items worn in this opening scene have been slowly revealed over the past 22 years, with some of the more recent discoveries including information about the custom collar and specific fabric used with the Turnbull & Asser shirts.

If you can’t trust a Swiss banker ..

The cufflinks chosen for this scene were also only recently identified in the past few years. While little is known about the cufflinks worn in Goldeneye, dunhill provided the overwhelming majority of cufflinks used for the remainder of Brosnan’s films. (All excellently covered by my friend @tie_another_day in a prior post). Therefore, it is a somewhat unusual departure that vintage cufflinks by Georg Jensen were selected for the opening sequence. 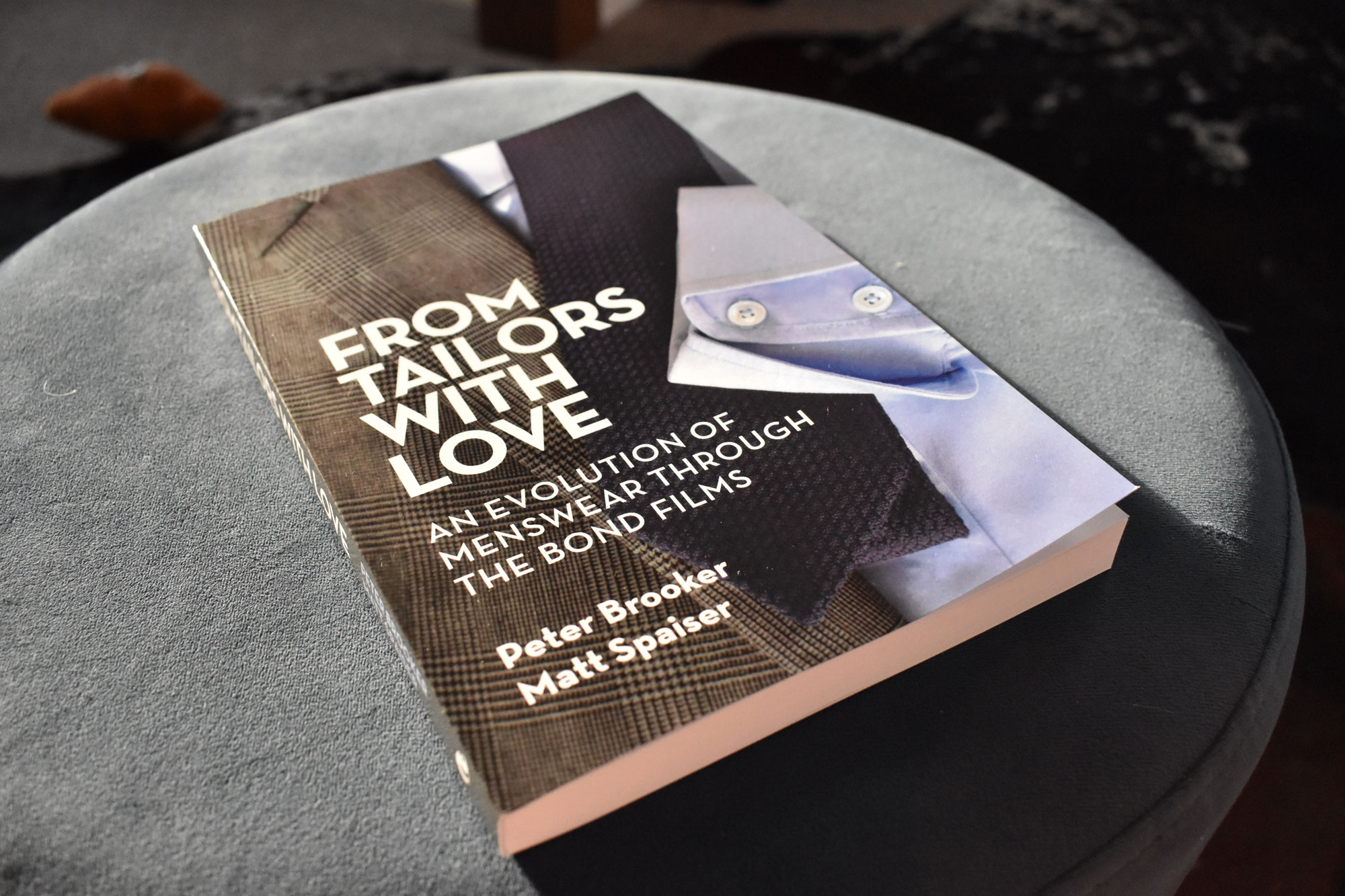 These triangular shaped cufflinks, #88, were first produced in the 1950s or 1960s (I have seen both cited), and discontinued around the mid to late 1980s. They were created by Danish designer Henning Koppel (1918 – 1981), who collaborated with GJ just towards the end of World War II and for several decades thereafter.

Koppel’s modernist approach emphasized organic shapes and forms, which reflected a shift from the more distinctly Art Nouveau stylings of early GJ works. While GJ no longer sells these cufflinks, they continue to offer a few of Koppel’s works, where some of the same design language is visible. 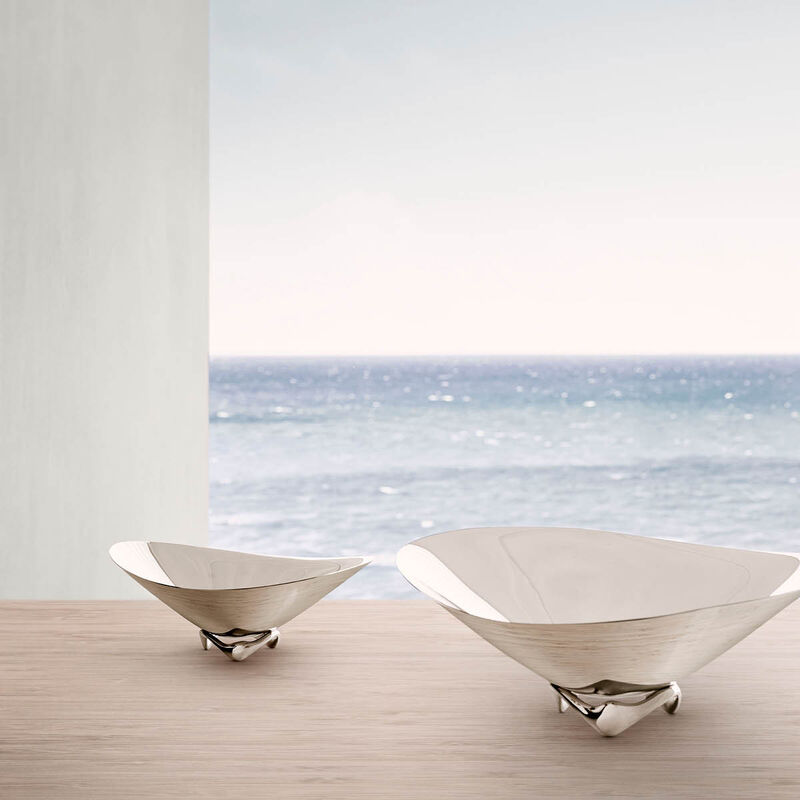 These polished sterling silver cufflinks have an interesting asymmetrical triangular, arrow shape almost reminiscent of the “Starfleet insignia” emblem from Star Trek. Stamped on the arm is its origin of manufacture – ‘DENMARK’, the model # – ‘88’, and an indication of the silver content ‘925 S’. 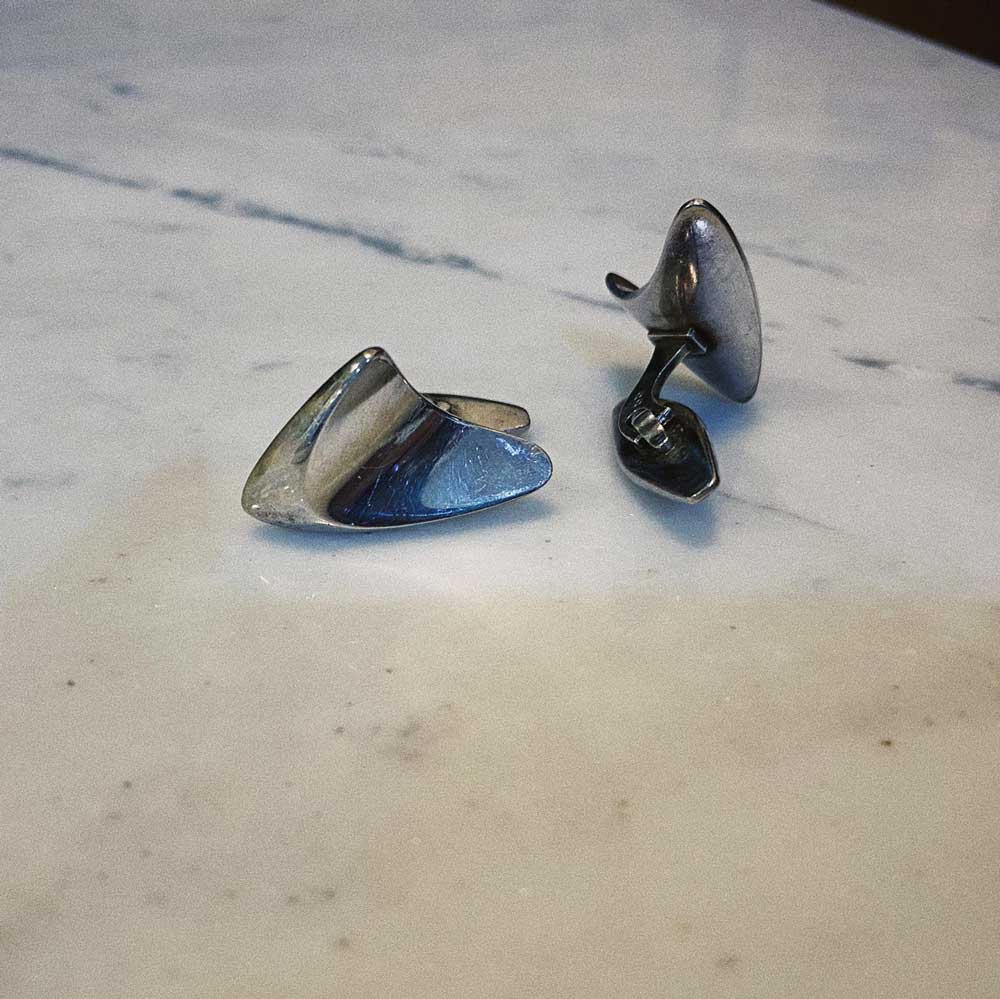 Lindy Hemming was known to “spot” items she wanted to incorporate into the wardrobe from her visits to different clothiers or factories (e.g., case in point, some of the T&A collars and ties ultimately adapted for use in Tomorrow Never Dies and The World is Not Enough were first spotted by Hemming on employees!).

Pierce Brosnan was later seen wearing these same GJ cufflinks years later at multiple non-Bond publicity events. Some speculate that either these were originally his vintage cufflinks contributed to the production, or perhaps more likely, that he was allowed to keep a pair after filming wrapped. 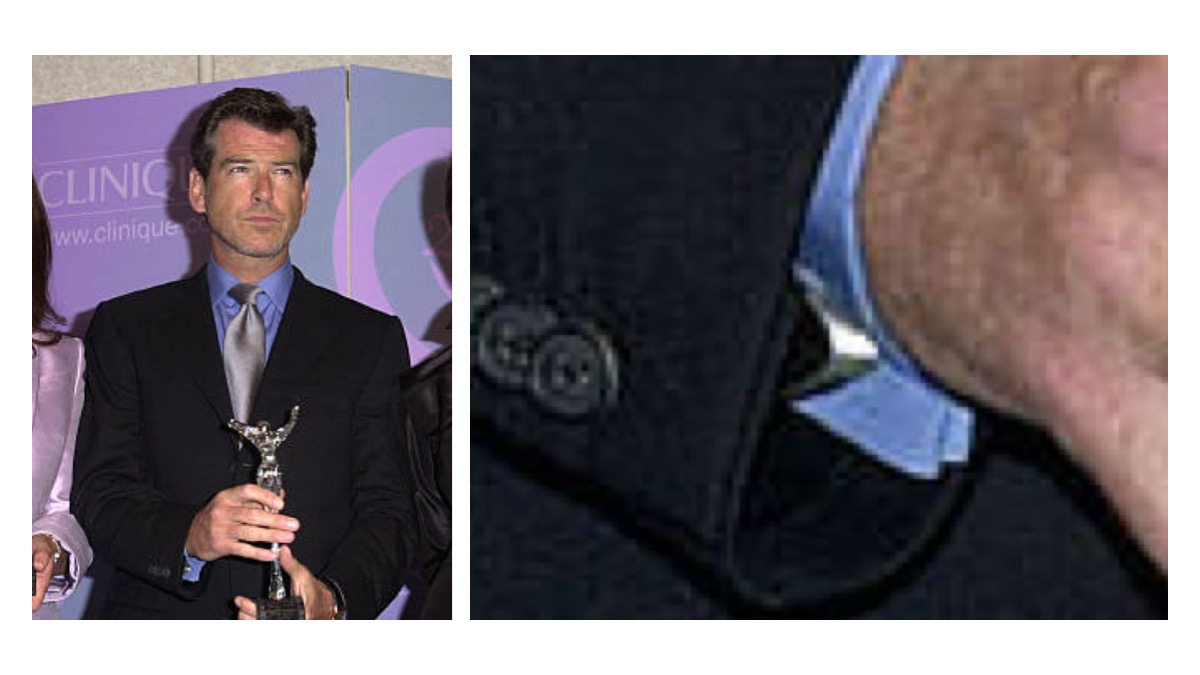 In contrast to the dunhill cufflinks worn in the ‘90s Bond films, these Georg Jensen cufflinks are not difficult to come across on the internet (at least, in used condition), as their production run spanned several decades. Beyond just collectability, how well it fits in your wardrobe is a question of proportion.

Many of Brosnan’s cufflinks as Bond have been critiqued as being a bit showy, but perhaps none more so than this pair which are actually quite large when worn on the cuff. In my opinion, they would not pair well with a thin dress watch. The famous blue Omega Seamaster Professional worn by Bond has just enough heft not to be overpowered by these links, but even some may find it too much. 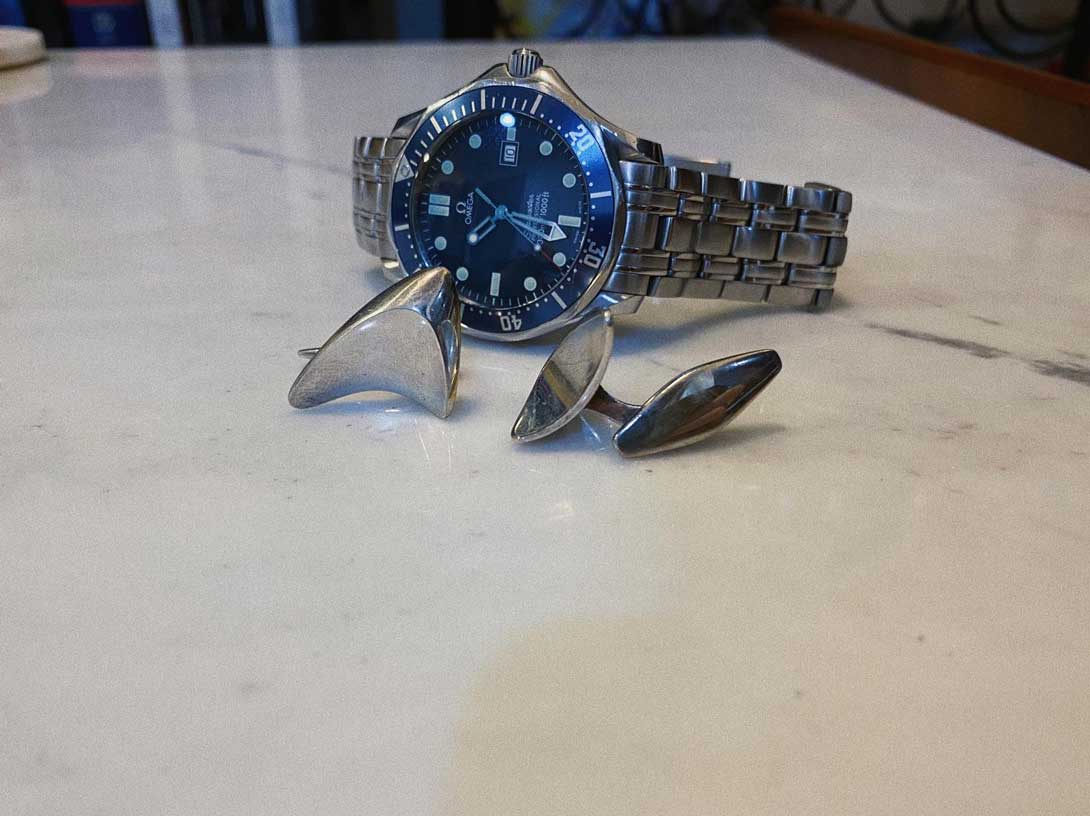 Article by Dan of A Very English Institution on Instagram