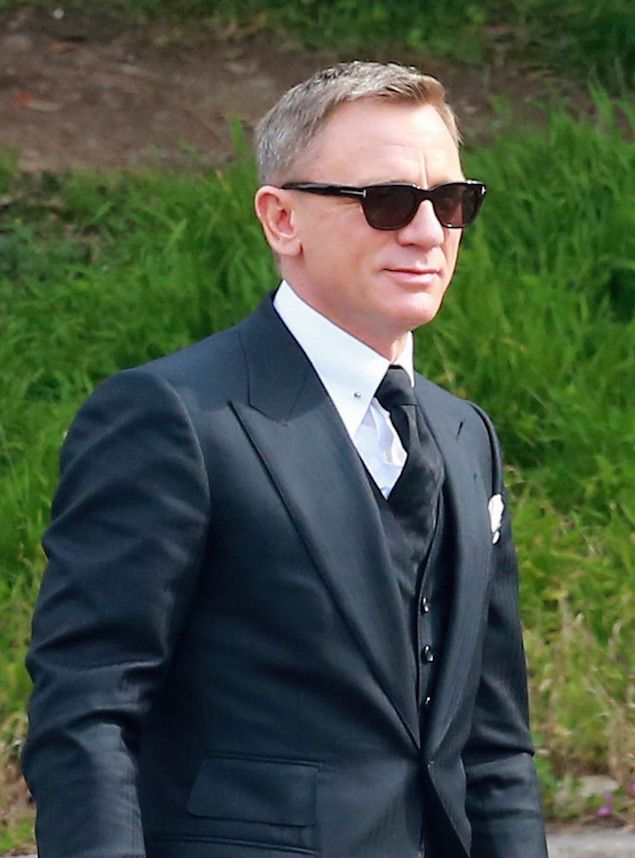 This black woven diamond-effect TOM FORD tie is much wider (9.5 cm) than the ‘Standard’ tie (7.5 cm) Bond wears when not undercover, which he wears in a larger knot. Matt Spaiser (from Bond Suits) suggests a Windsor knot, and I’m not going to argue with him on that.

It’s an accessory that gets an incredible amount of screen time. Bond wears this Tom Ford tie when undercover in Rome in Spectre during the funeral of Marco Sciarra, at the home of his widow Lucia, then straight to the SPECTRE meeting at Palazzo Cardenza (which oddly looks like Blenheim Palace), followed by a car chase in the streets of Rome. 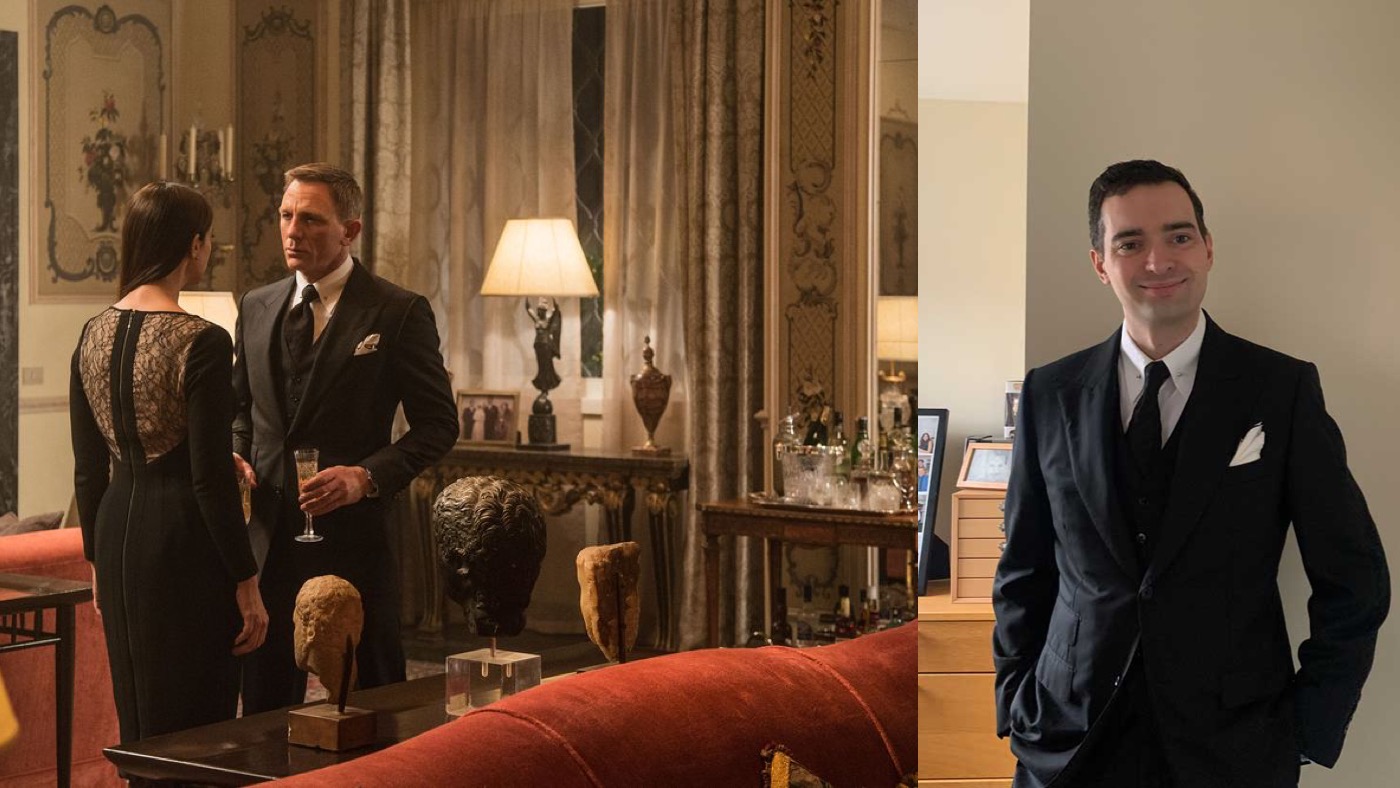 A matter of taste

Although costume designer Jany Temime says this is Bond undercover, there are a lot of Bond’s personal affectations on show here. With this tie, although bigger than the ties in Skyfall and Spectre, it matches with his past trend of subtle patterns within his ties (at least between Casino Royale and Skyfall). He also ties it with a wider knot, like he does with his ties in Quantum of Solace.

What’s in the box?

As with the other four Spectre ties these were bought from the TOM FORD store in London in 2015. They were part of the Spectre capsule but are no longer available. AJB007 members do sometime wish to part with items from their collections, or you can post stating your interest in acquiring such items in the ‘For Sale or Trade’ forum. Like all TOM FORD ties it came it the signature grey presentation box, wrapped in a slightly darker grey tissue paper. 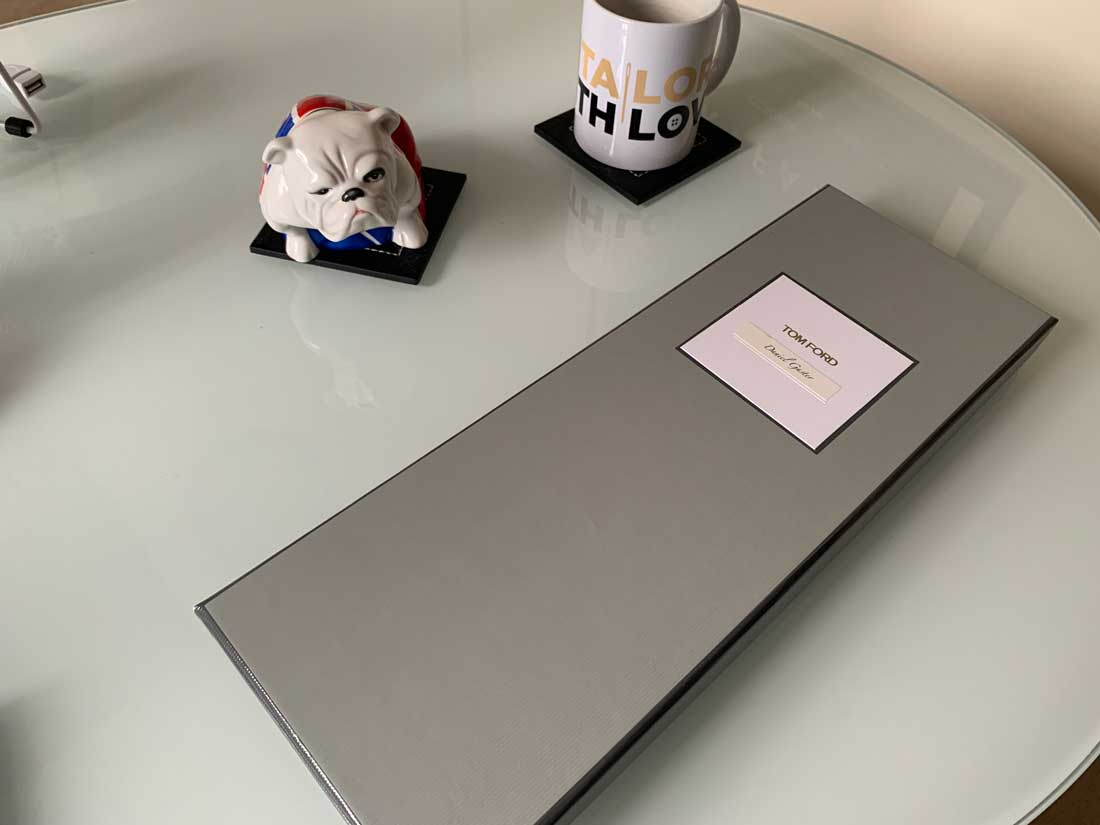 I do wear this tie quite a bit, alternating between all the other ties that I have. Though I cannot bring myself to tie it in the larger Windsor or Half-Windsor knots and tend to tie this with a four-in-hand knot.  Although once tied it still has a bit more thickness to it, you can see this with the result after tying it that it looks larger.

Although black ties are seen to be used for formal occasions, I have always liked a black tie, even if you get the odd “going to a funeral?” comment. The Bond Ian Fleming wrote about always wore a black knitted tie, why shouldn’t you? 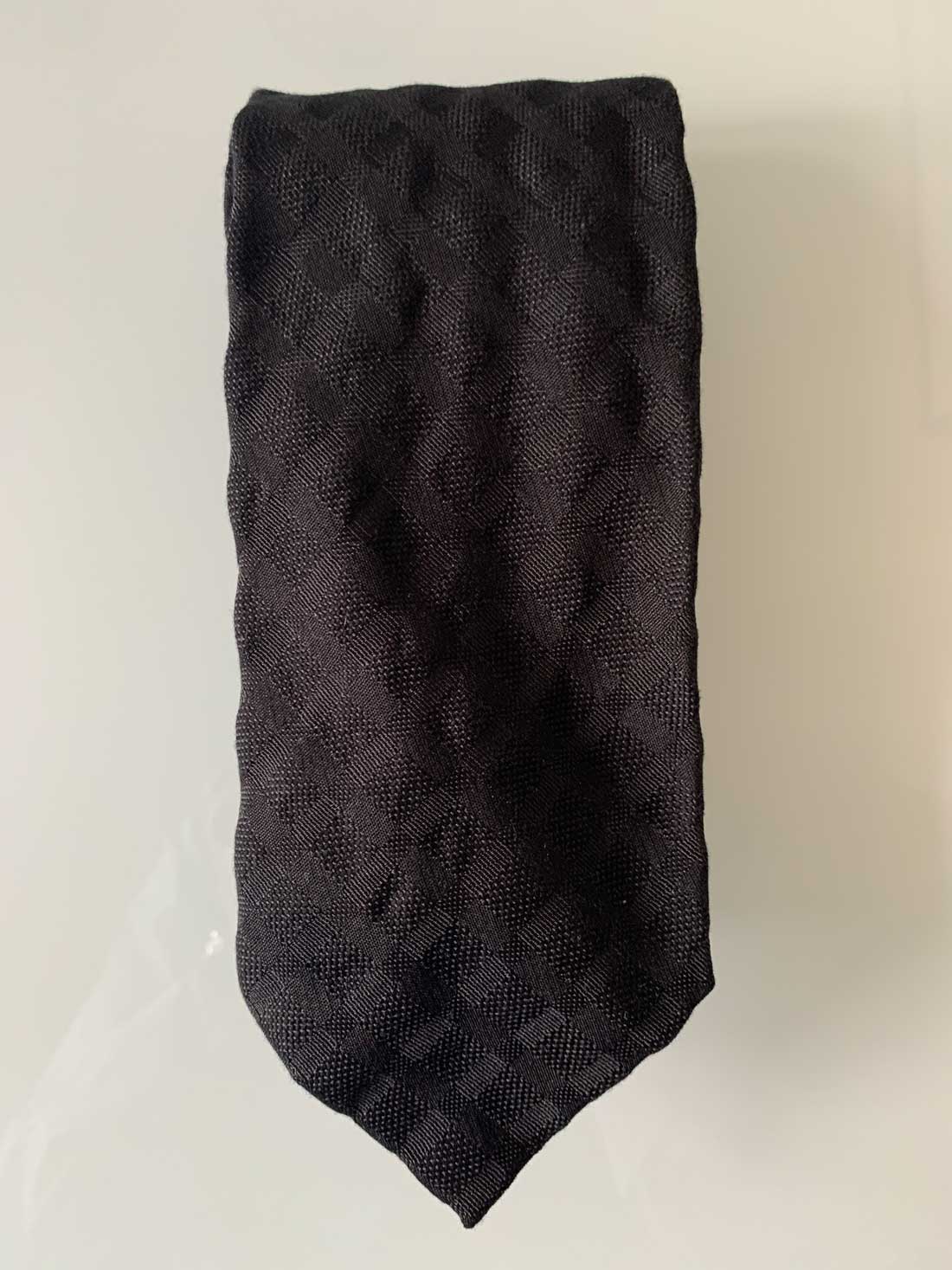 When I went to see Spectre for the first time, I went to the Showcase Cinema de Lux in Leicester. My friend Ben and I got tickets for the Director’s Hall, which is basically a cinema with a bar in it. Very sophisticated!

Ben and I have gone to see every 007 together since Quantum of Solace, and we always dress up to go. So of course, I wore a black suit and white shirt and this tie, with the TOM FORD white silk pocket square with black piping (also from Spectre). This was probably this tie first outing, but it hasn’t been it’s last. 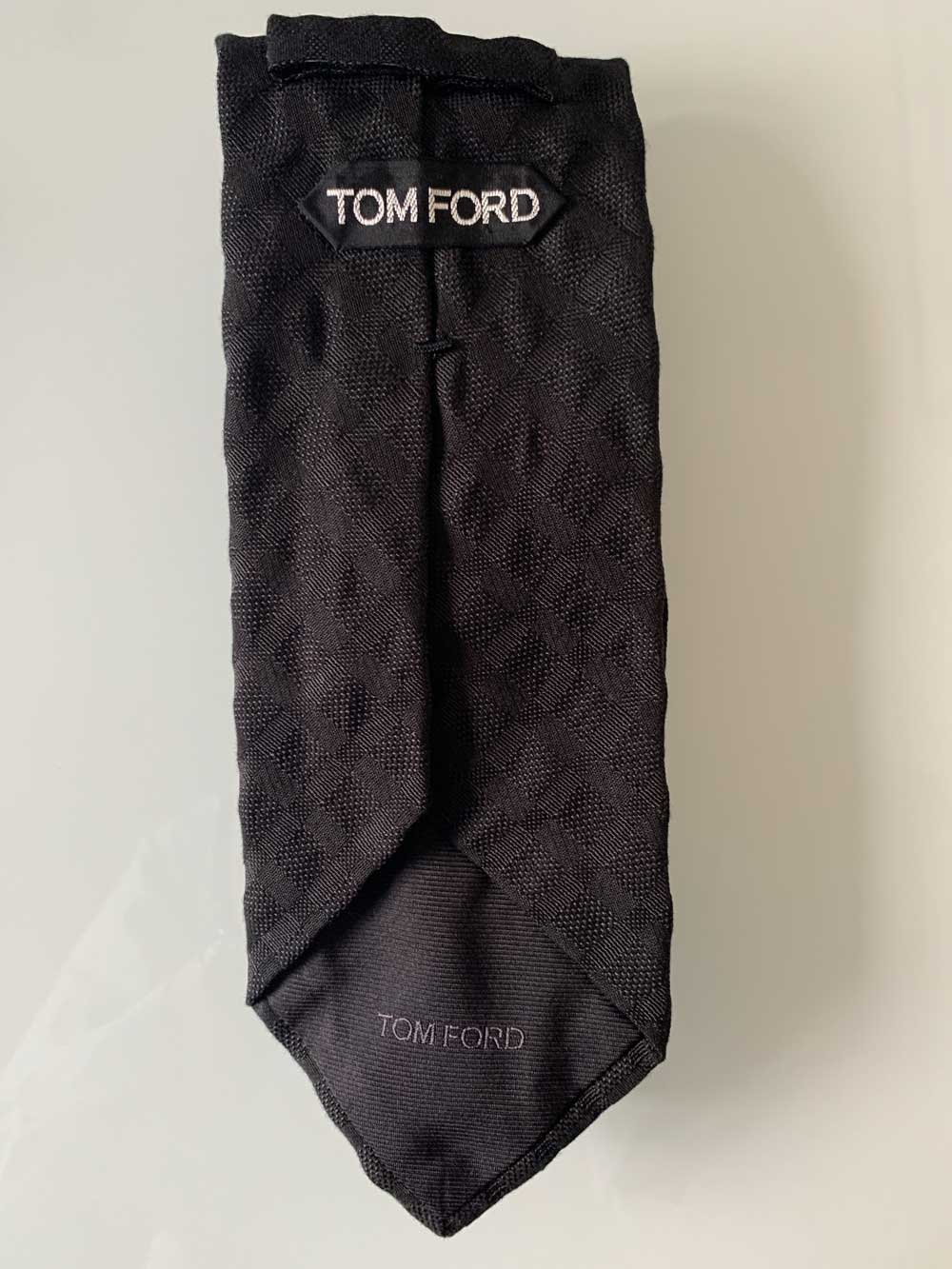 This is a fantastic tie which has held up well over the past 5 years. There is little sign of wear, any folds fall out after I’ve hung it up in the wardrobe, ready for the next outing.

Like most of my ties from TOM FORD they will last for the long stretch, I have no problem in recommending this tie to anyone. 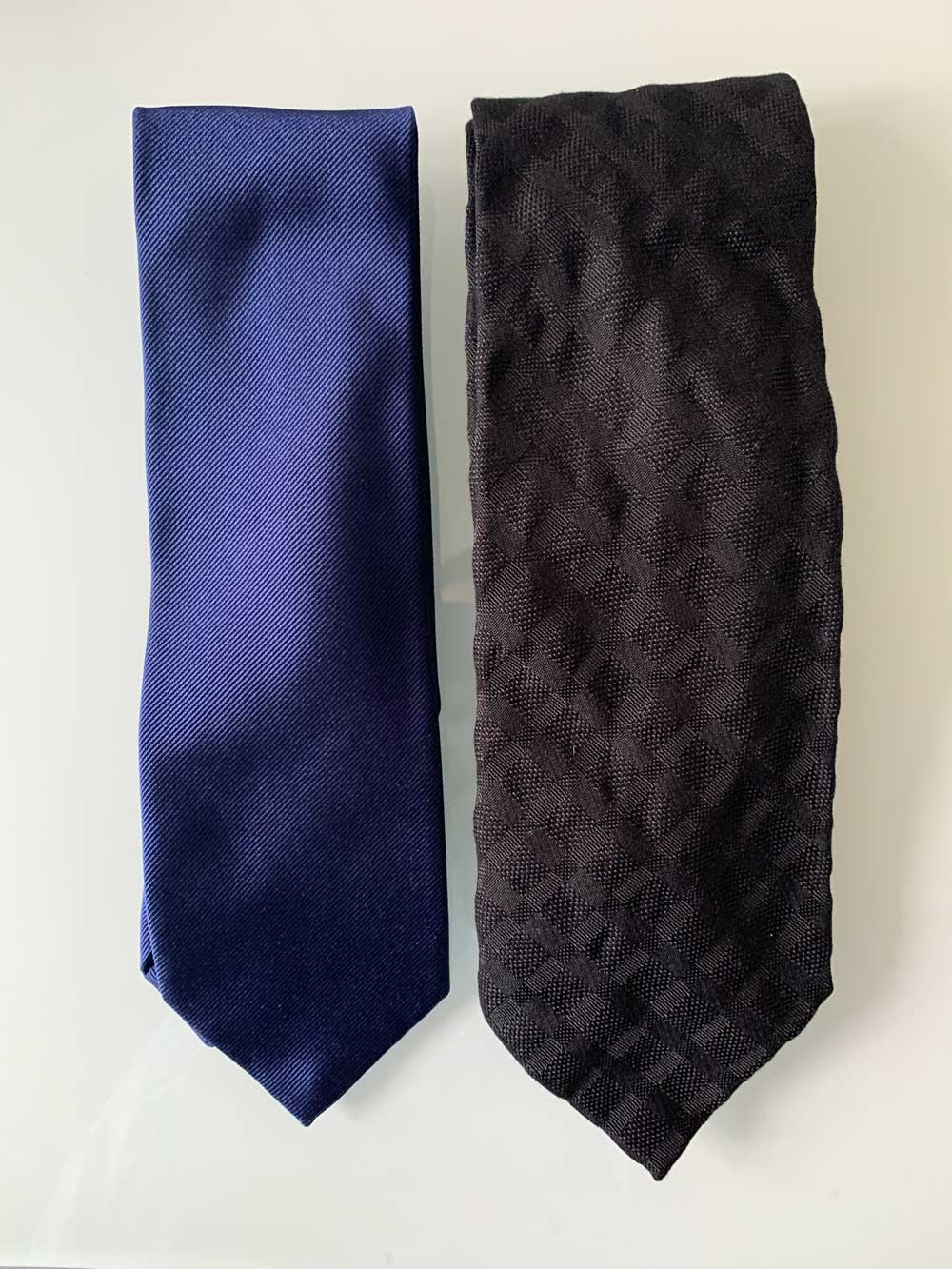 The other Spectre tie much narrower in comparison

All screencaps in this post are the copyright of their respective movie studio and are reproduced here under the Fair Use doctrine.