I thought that these had a more elegant, stylish and tailored look to them and were less on the Budgie Smugglers side of swimwear. 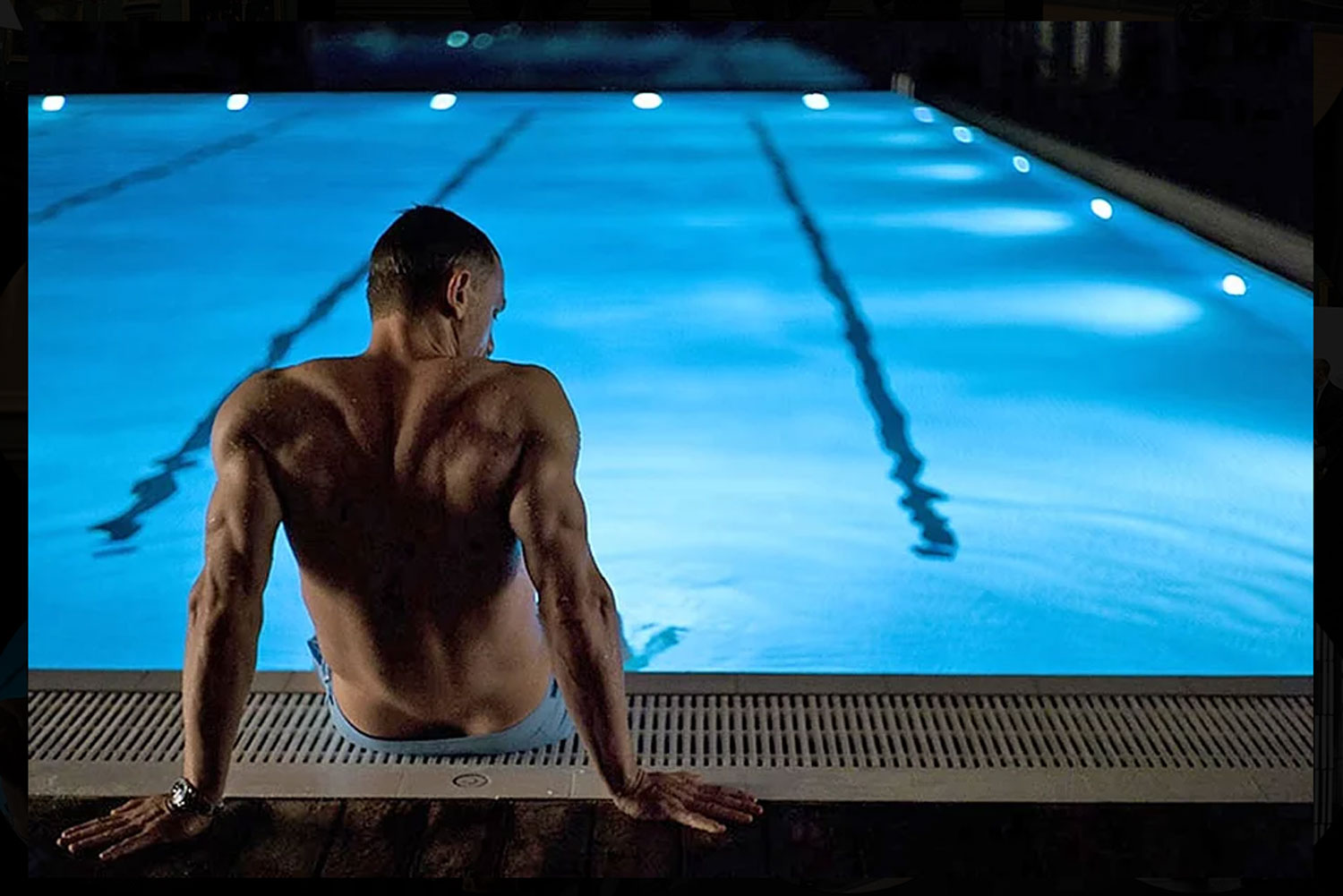 I hadn’t heard of Orlebar Brown before the photos were released of James Bond poolside following a swim in his Hotel in Shanghai (or was it Canary Wharf?).  I think at the time it was one of the first photos released from Skyfall. As always, I looked them up on James Bond Lifestyle to see what they were and where they came from. 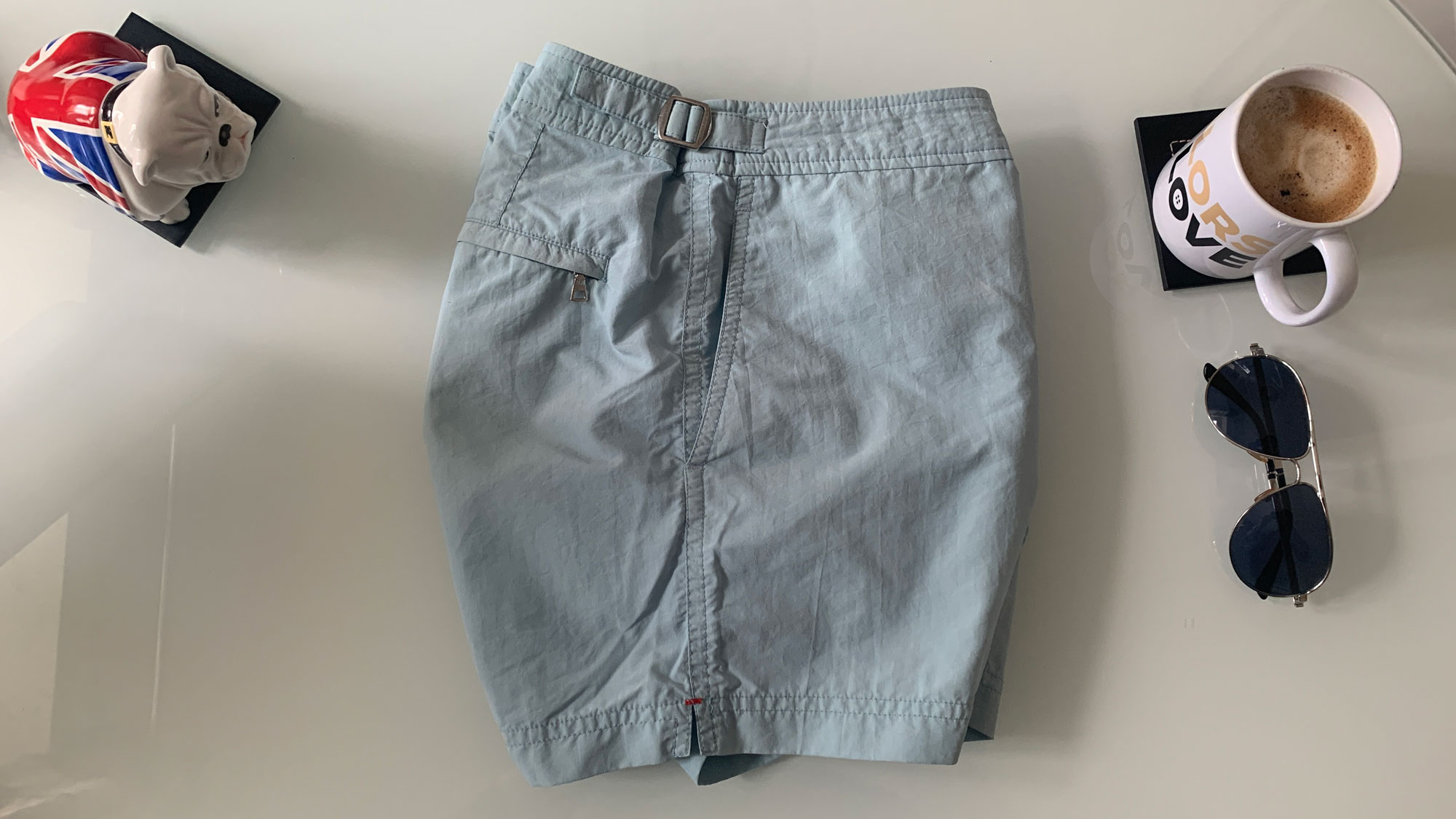 Once looking them up, I immediately liked them. Unlike the ‘La Perla “Grigioperla”’ shorts in Casino Royale. I thought that these had a more elegant, stylish and tailored look to them and were less on the Budgie Smugglers side of swimwear.

I could see me wearing these, compared to the La Perla, which I think I’d be too self-conscious in.

Unfortunately, it looked like the whole world had seen the image, as there was no stock of the Setters in Sky at the time I looked. 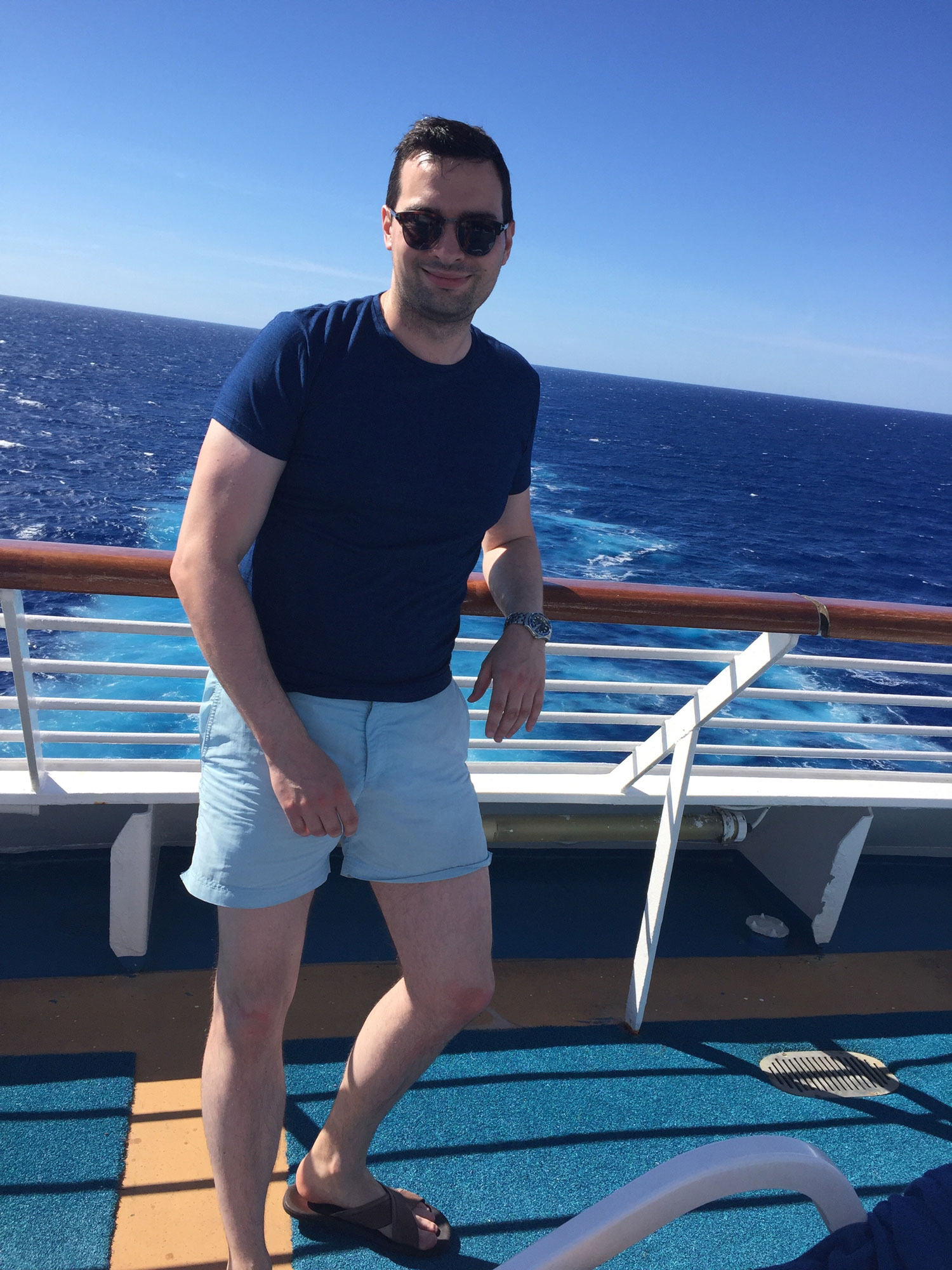 I must have kept looking periodically, to see if they were available. I signed up to the Orlebar Brown club in April 2012, which also provided me with a 10% discount on my first order. At this point I don’t remember (and don’t have any emails to prove it) if I contacted the Orlebar Brown concierge, or if they had an email alert for when they were back in stock?

About a month later I was able to order my first pair of Orlebar Brown shorts. Well two pairs, as I also got a pair in Navy. 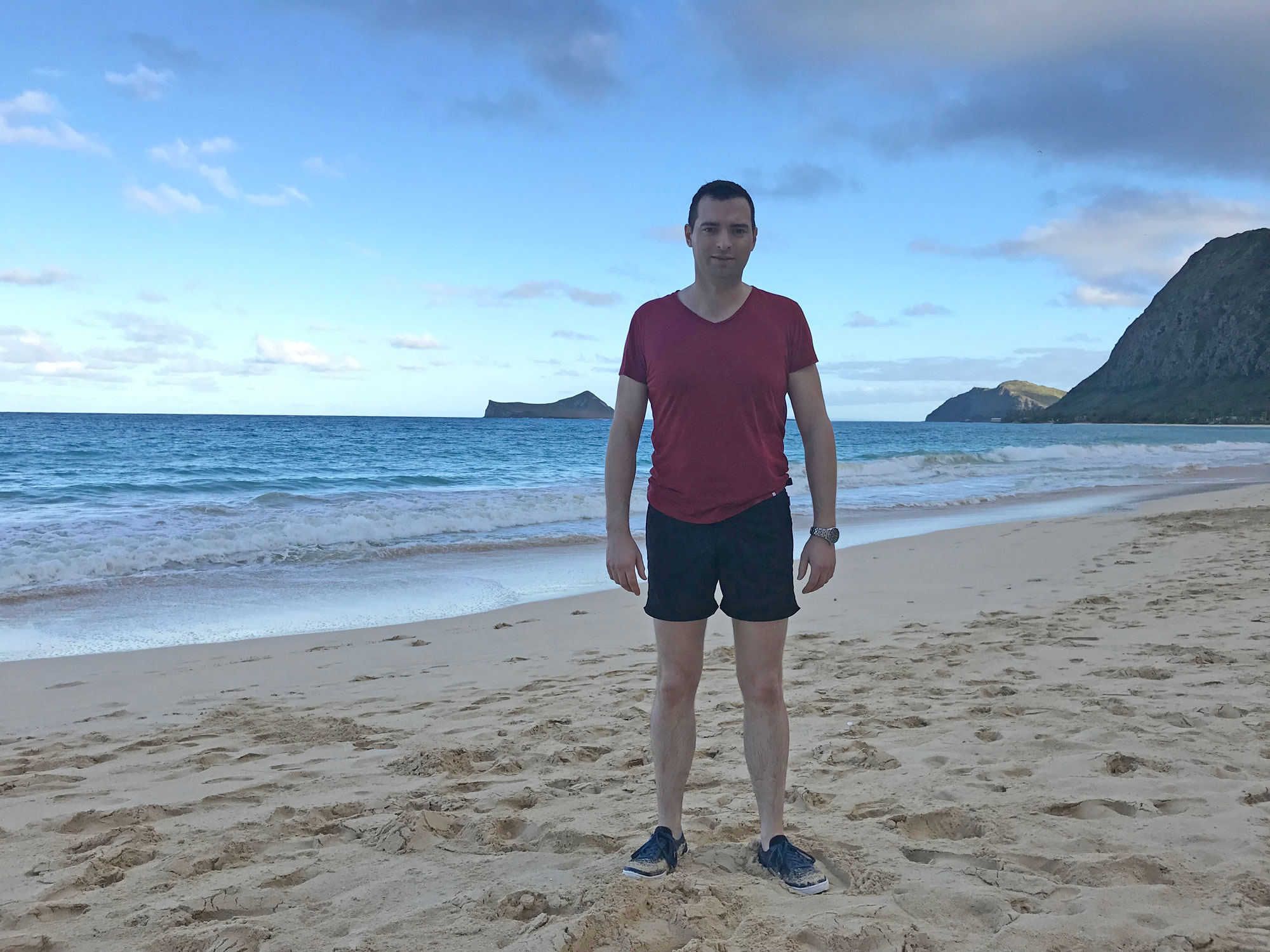 It’s all wrapped up

They arrived fairly quickly, but I don’t recall at that time if they came in the plain white box with the red inside, covered in the OB tissue paper as they have done for years now. I’ve received so many of these boxes now I can’t remember if it started out that way? But that is what you’ll get when you order from Orlebar Brown direct.

A full interview with the Adam Brown CEO of Orlebar Brown and the brand’s connection to James Bond can be found in the book From Tailors With Love: An Evolution of Menswear Through the Bond Films. Available on Amazon. 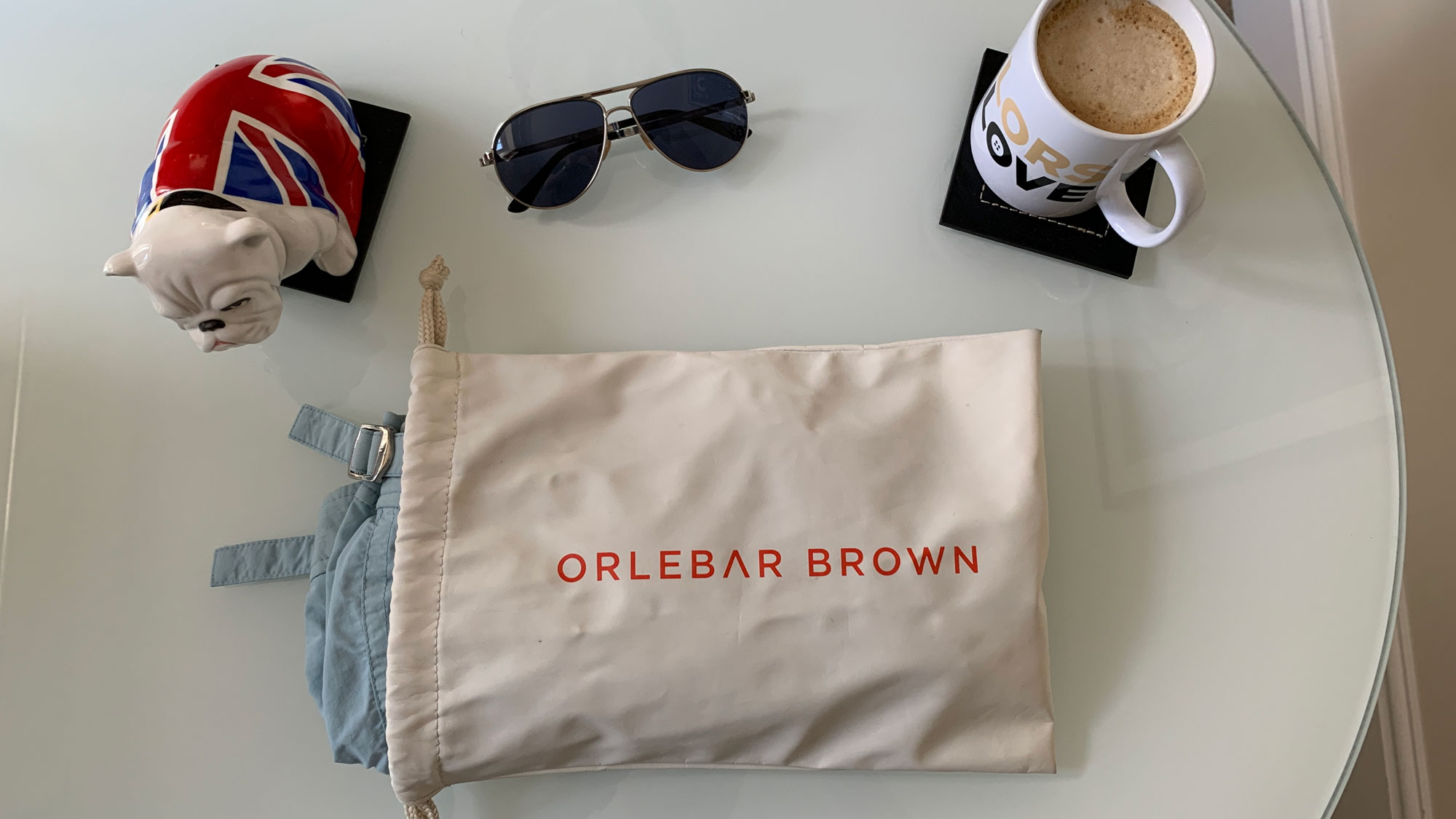 The shorts when you look at them do look very smart. It’s not just the side-adjusters that gave it that tailored feel to them, the whole design looks like you’ve had them made by a tailor.

Them have two side pockets, and one rear zipped pocket, a fly front and popper and like I mentioned the side-adjusters to get that perfect fit. As with all Orlebar Brown items they have that little bit of red stitching on them, on these it’s at the bottom of the leg. 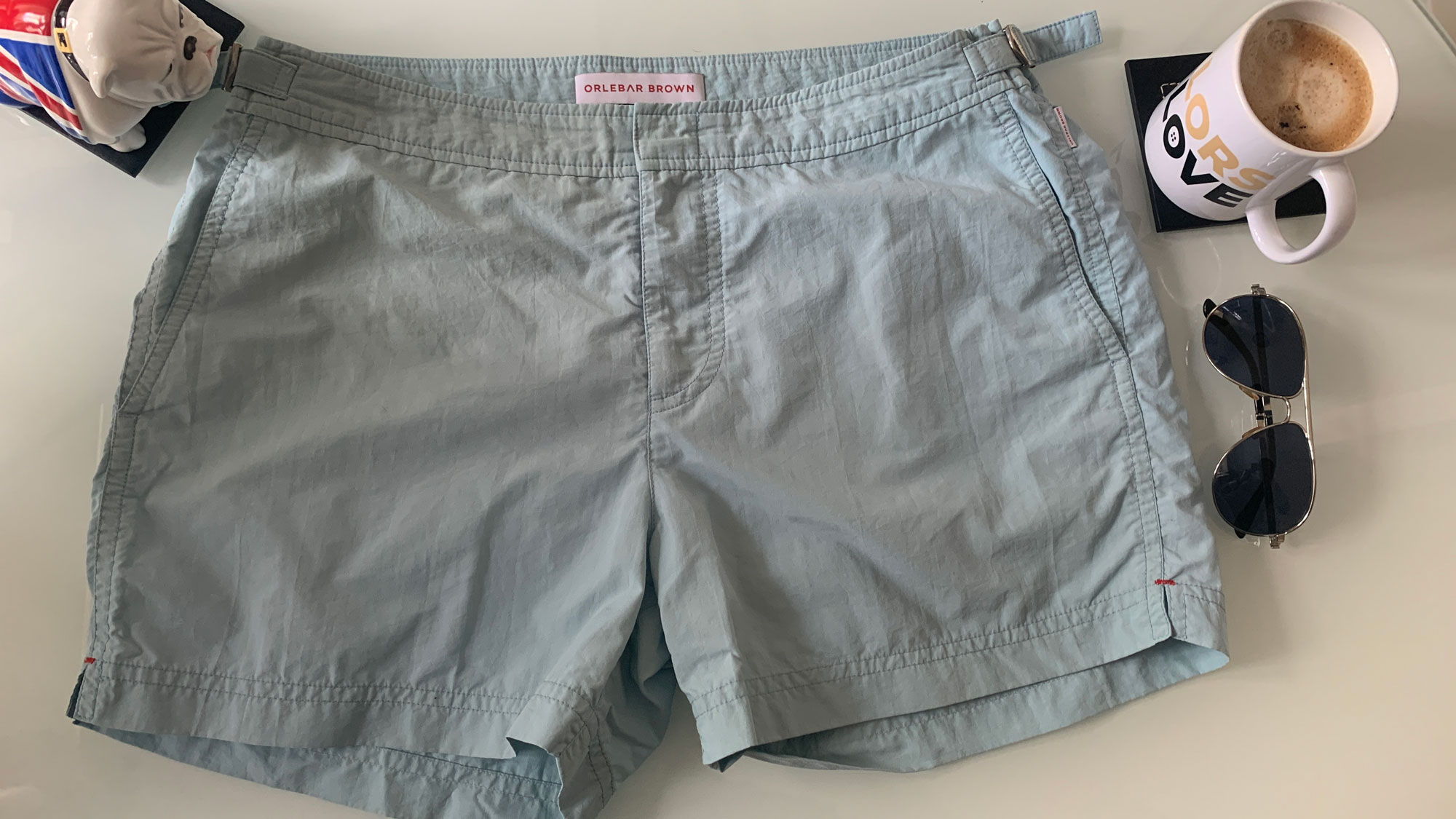 I regularly use mine not just for swimming in, but also for wondering around in when on holiday. Paired with a t-shirt, polo or shirt. I don’t have any other shorts, and I don’t feel that I need them with these, as they work in both environments, and can transition so easily.

9 years ago, I purchased my shorts in a 34, which for me was right, as I could take the side adjusters in (or out following dinner) to fit well. At that point the sizing only went up or down by 2 inches. Over the last 4 or 5 years they have been available in differences of 1 inch (but only for the swimwear), and for me now the 33 is a better fit. 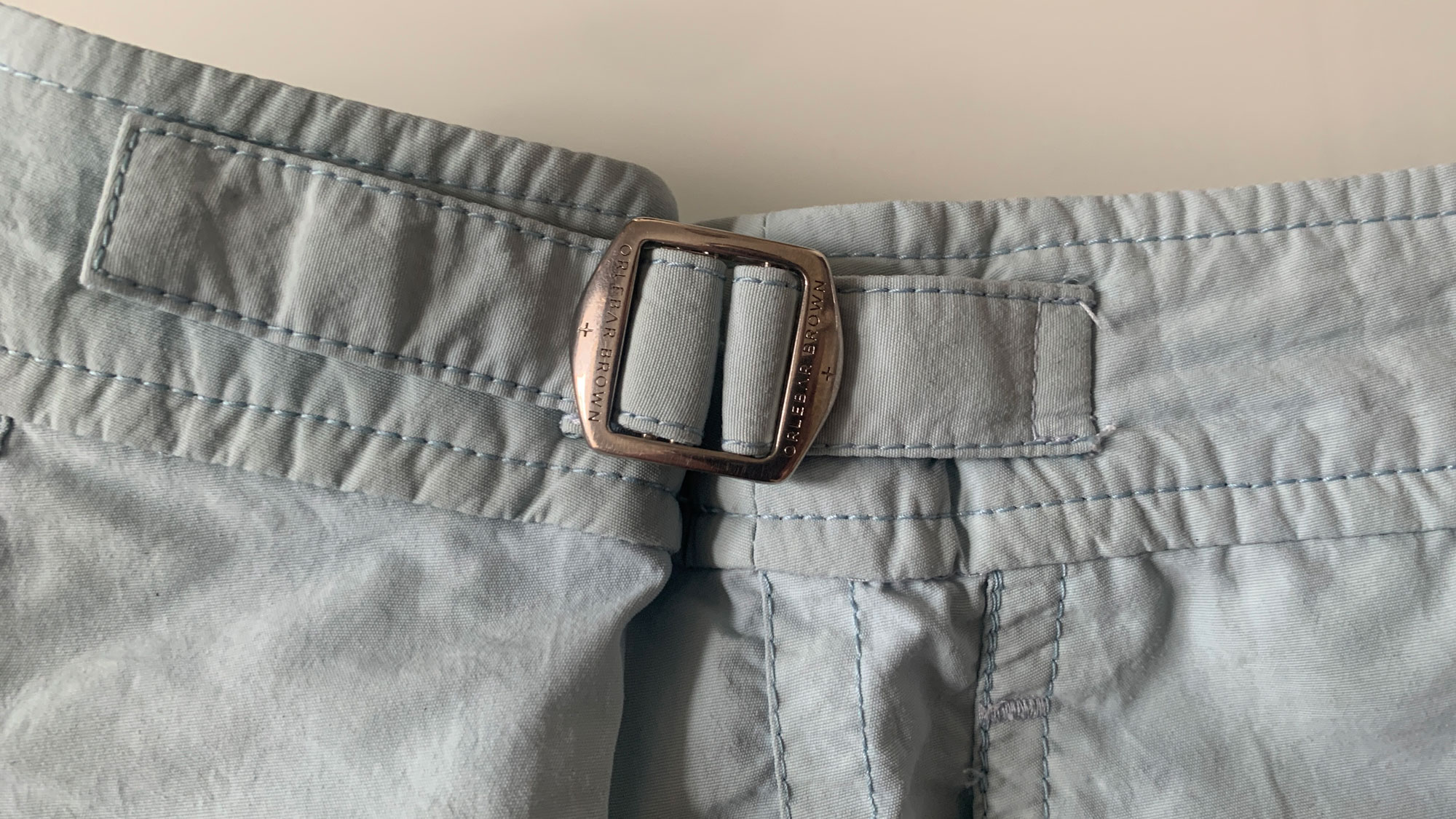 When I purchased the Thunderball Setters I got these in a 33, as without the side adjusters the 34 would have been too big, and swimming would have been, interesting. This was a good move on the part of Orlebar Brown. It illustrates the concept of tailored swimwear. 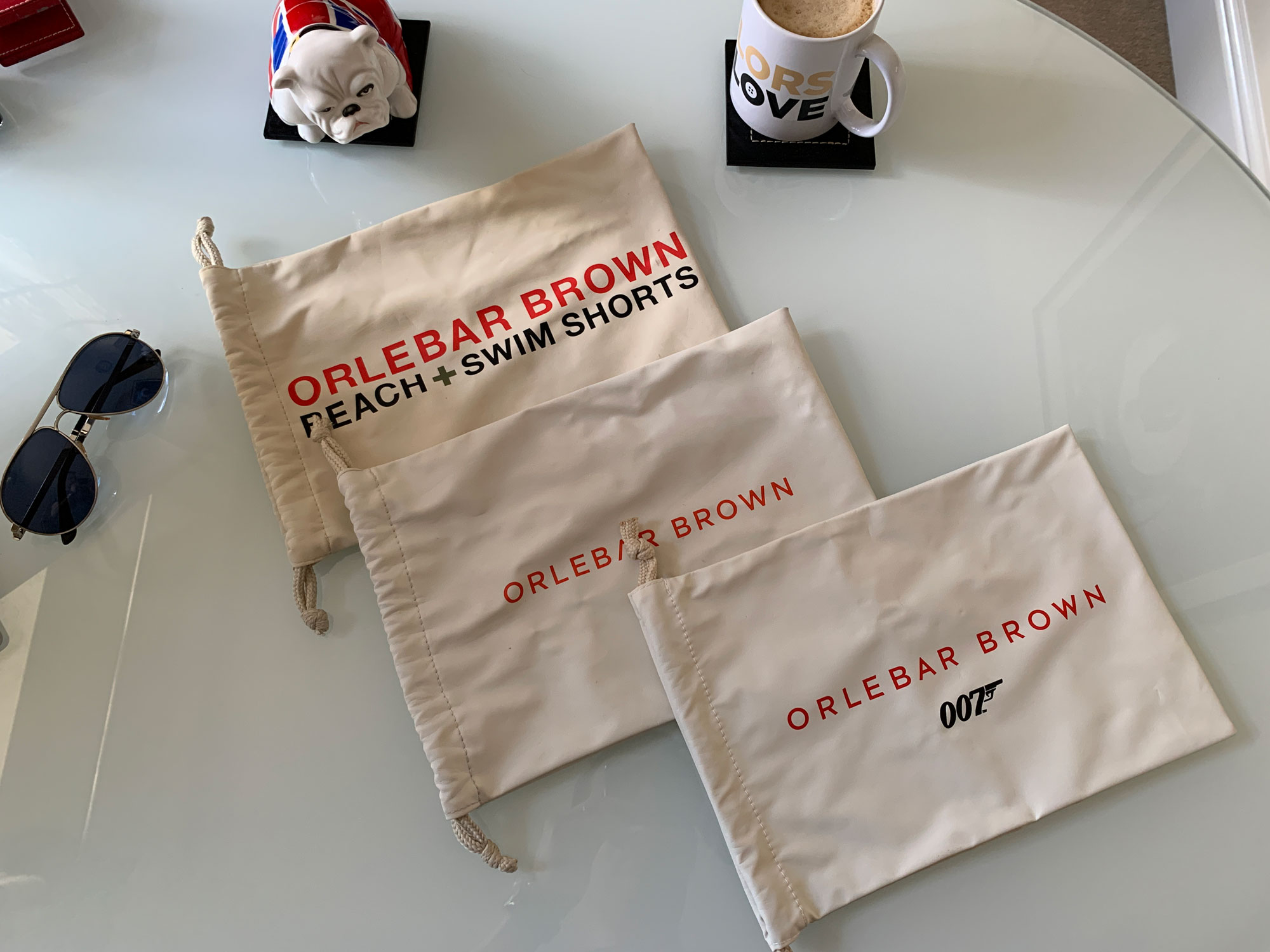 What I wasn’t expecting at the time, were the bags that they came in. Each pair came in a waterproof drawstring bag. This is a really useful addition! I have used mine for carrying home wet shorts or used it to hold my items that I’ve taken with me to the beach, or even as shoe bags for when I’m packing. 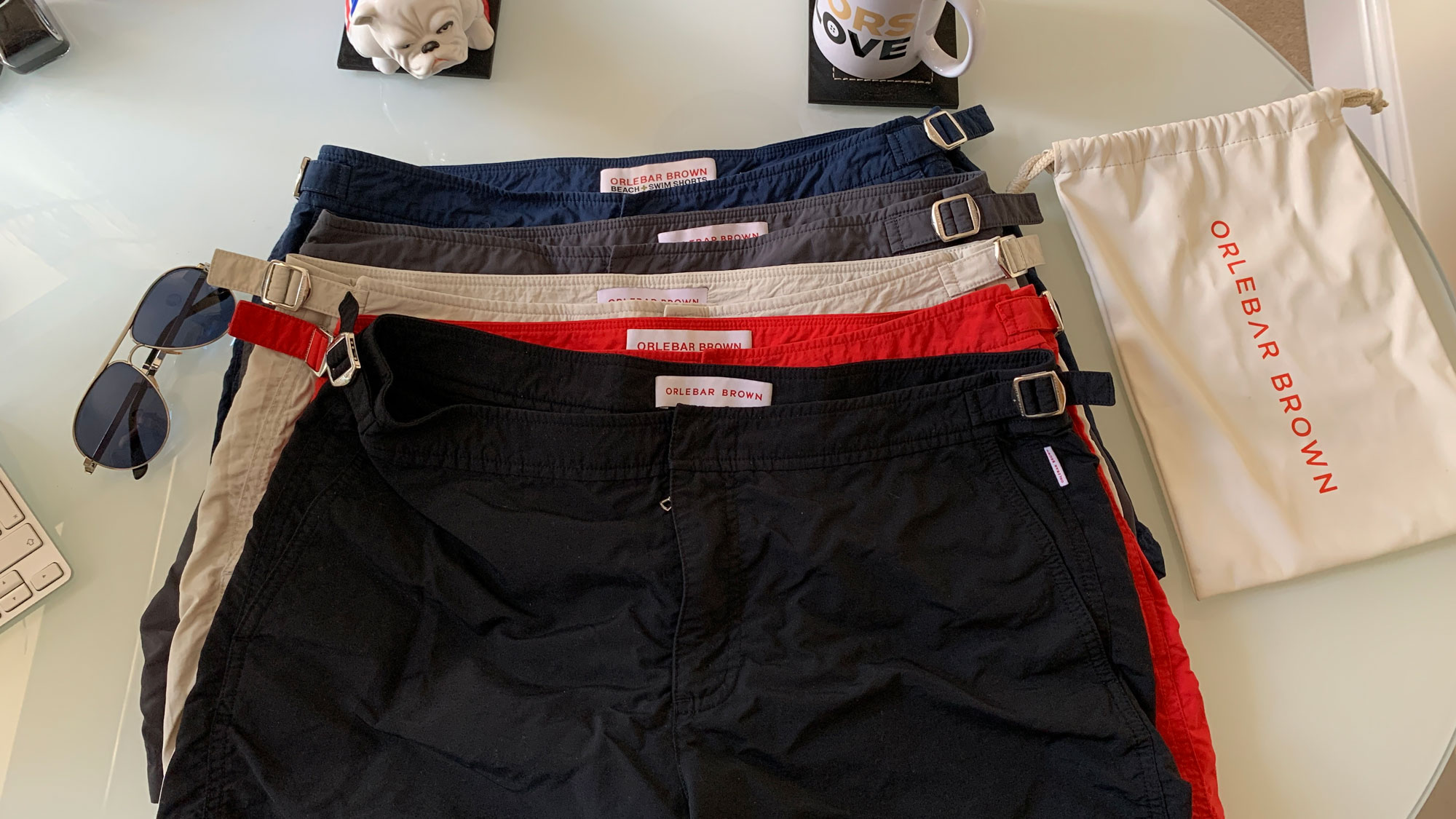 Since owning the Orlebar Brown Setters, I have found that I can swim much easier in these compared to longer swim shorts that I had previously owned. Over the years I’ve purchased several Setters, in different colours.

Orlebar Brown for years had temporary setups at Bicester Village for 6-10 weeks of the summer. And I was able to get some of the Setters for a bargain price of £50, including another pair in Sky. 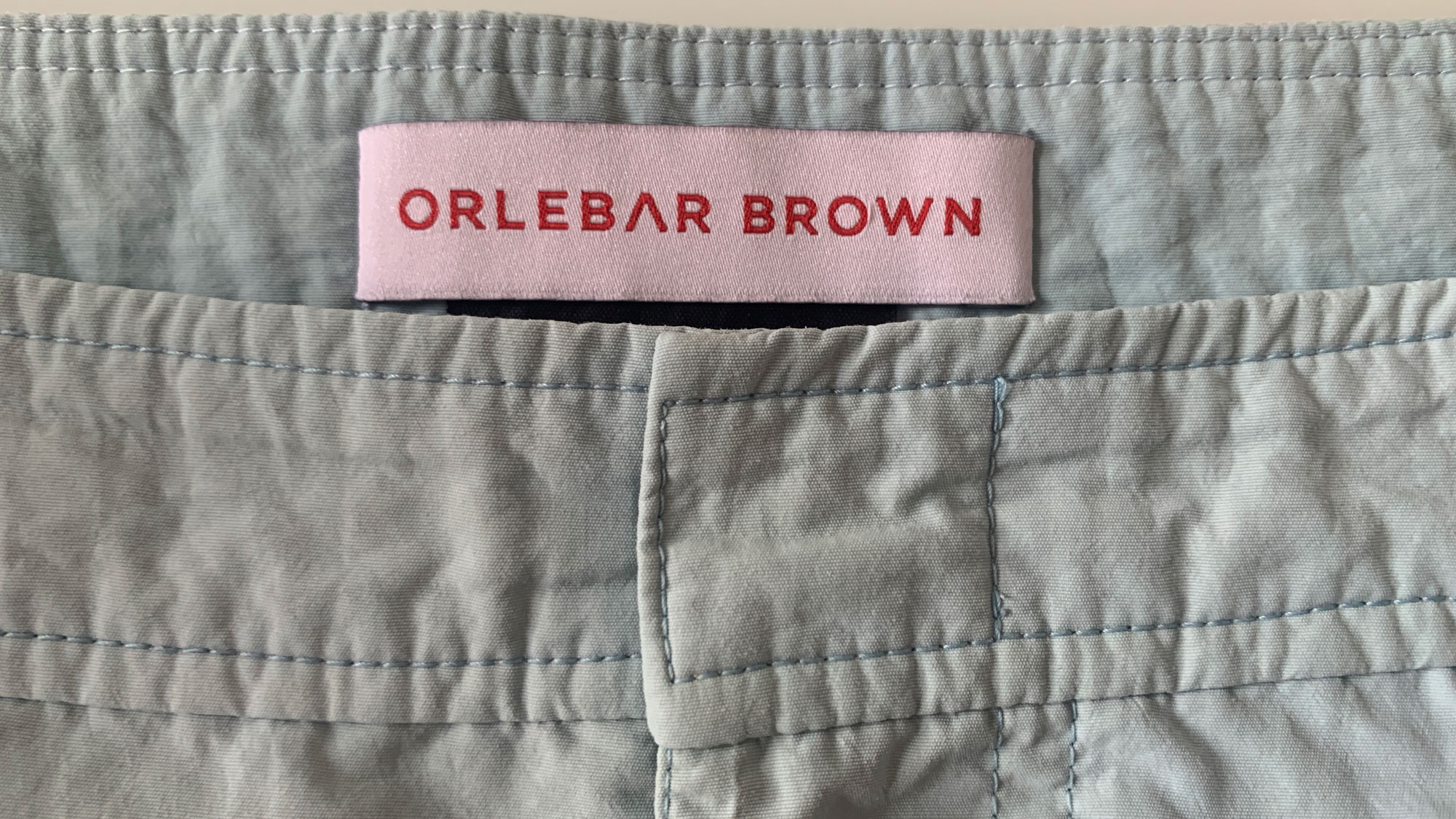 I now own several pairs in different colours, which I take on holiday, not just for swimming, but also for casual wear. For years I didn’t buy any more, as I only ever wear shorts on holiday or swimming in. The exceptions to this were a pair in Black which I bought in a 33 in 2014, which I use mostly for swimming in at the gym and the aforementioned Thunderball setters in 2019.

You don’t have to worry

If we exclude the Thunderball Setters, these shorts have lasted extremely well. Granted I only use them in the summer, but as an investment they are really good. I remember reading that the materials used to make their shorts was tested with chlorine and with suntan creams.

So that you are able to use them, and the shorts would be fine after.

Which for me is important, as I burn far too easily! But this is good for when reapplying the suntan when wondering a city or area, and not have to worry about getting greasy suntan on your expensive shorts. 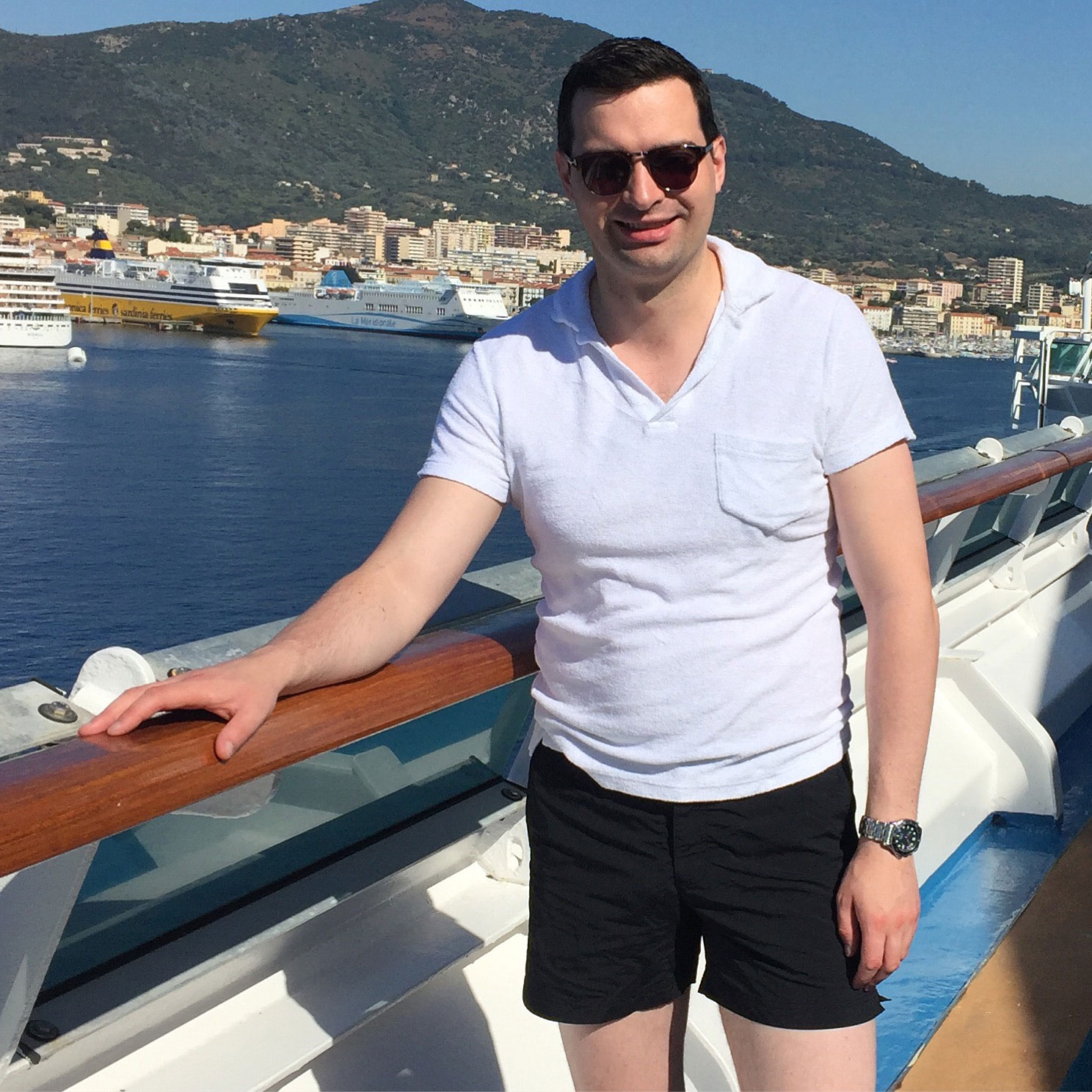 The Setters are still available to buy, coming in a number of colours, and patterns and some tweaked styles, including the Thunderball, the board shorts and the drawstring styles (as of June 2021). The ‘Sky’ colour was discontinued sometime in 2015, with a brief return in 2019 for the first 007 collection.

Orlebar Brown have recently re-released some of the items from the previous phases of their Bond collections.

One of these items are in fact the Sky Setters. (Now the Skyfall Setters in the range). So, if you have missed out before, you have another opportunity now. Other available colours you can get are the ‘Sky Blue’ or the ‘Riviera II’. 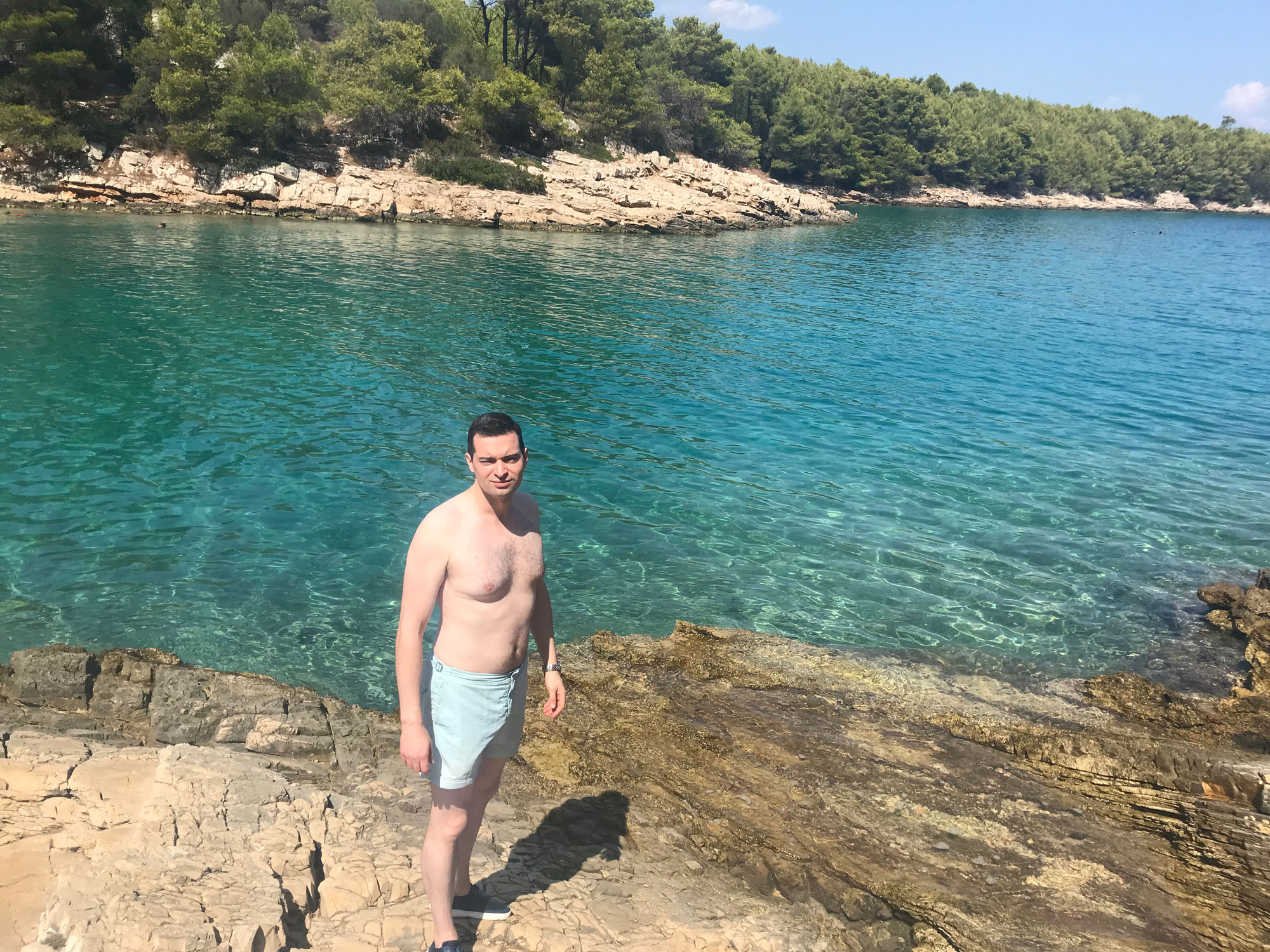 I didn’t know there was a pool down there

If you think, well I like the look, but they are not a fan of “short shorts” then you could go with the Bull Dog, which is a mid-length. Or if that is still too short then there is the Dane. If you are the other way inclined and look at the setter and think “I like short shorts”, but these are still a bit to long, don’t fear, take a look at the Springer, the shortest of the Orlebar Brown classic shorts range.

I think which ever colour, style or length that you get, these are a fantastic investment for your summer wardrobe, or suitcase. They come with a 5-year guarantee, a waterproof bag and an elevation in your poolside style. 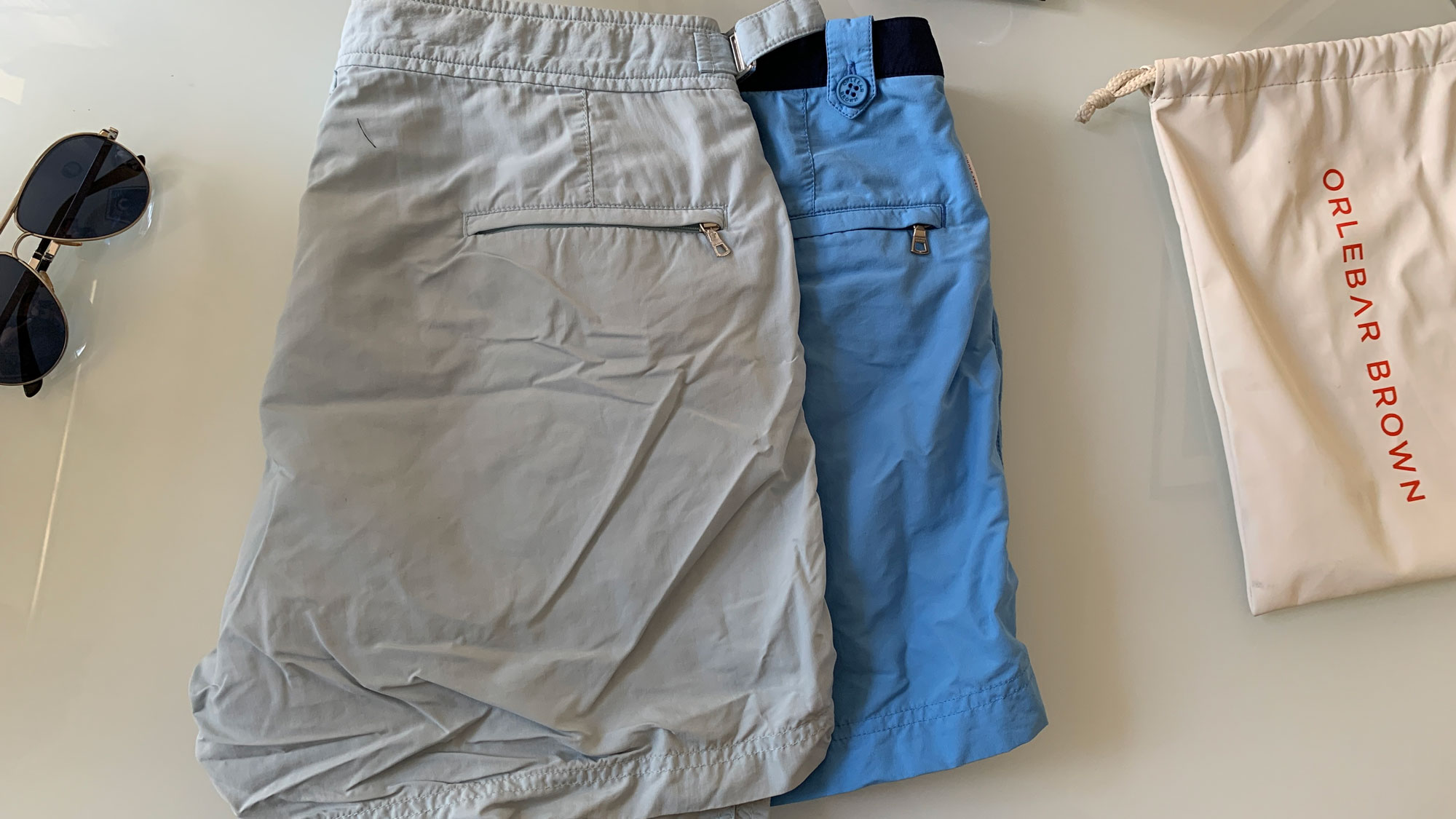 … In the shops for Christmas

Orlebar Brown have impressed me so much that although I’ve not needed more swim shorts, I have purchased t-shirts, polos and trousers from them, and have been very happy with the quality of all their products. They also have a permanent store at Bicester Village, selling reduced priced items. Which I’ll be going back to once stores reopen and I’ve been vaccinated.

Photo of Daniel Craig from Thunderball sourced through the Thunderball.ORG website, the unofficial James Bond picture archive. Used here under the fair use doctrine. Be sure to check out more reviews by Daniel Gaster. Follow Daniel on Instagram.