This was my favourite suit from a favourite film, owning it is a joy.

Why this Pinstripe suit?

Given James Bond has worn no shortage of suits since his first screen appearance in 1962, the first choice when having a bespoke ‘double-oh-suit’ made is choosing which one to have made. Some might choose based on an emotional connection to the film or the scene. I did this when buying the Turnbull & Asser tie worn in Hamburg in 1997’s Tomorrow Never Dies; it’s my favourite section of my favourite Pierce Brosnan film. 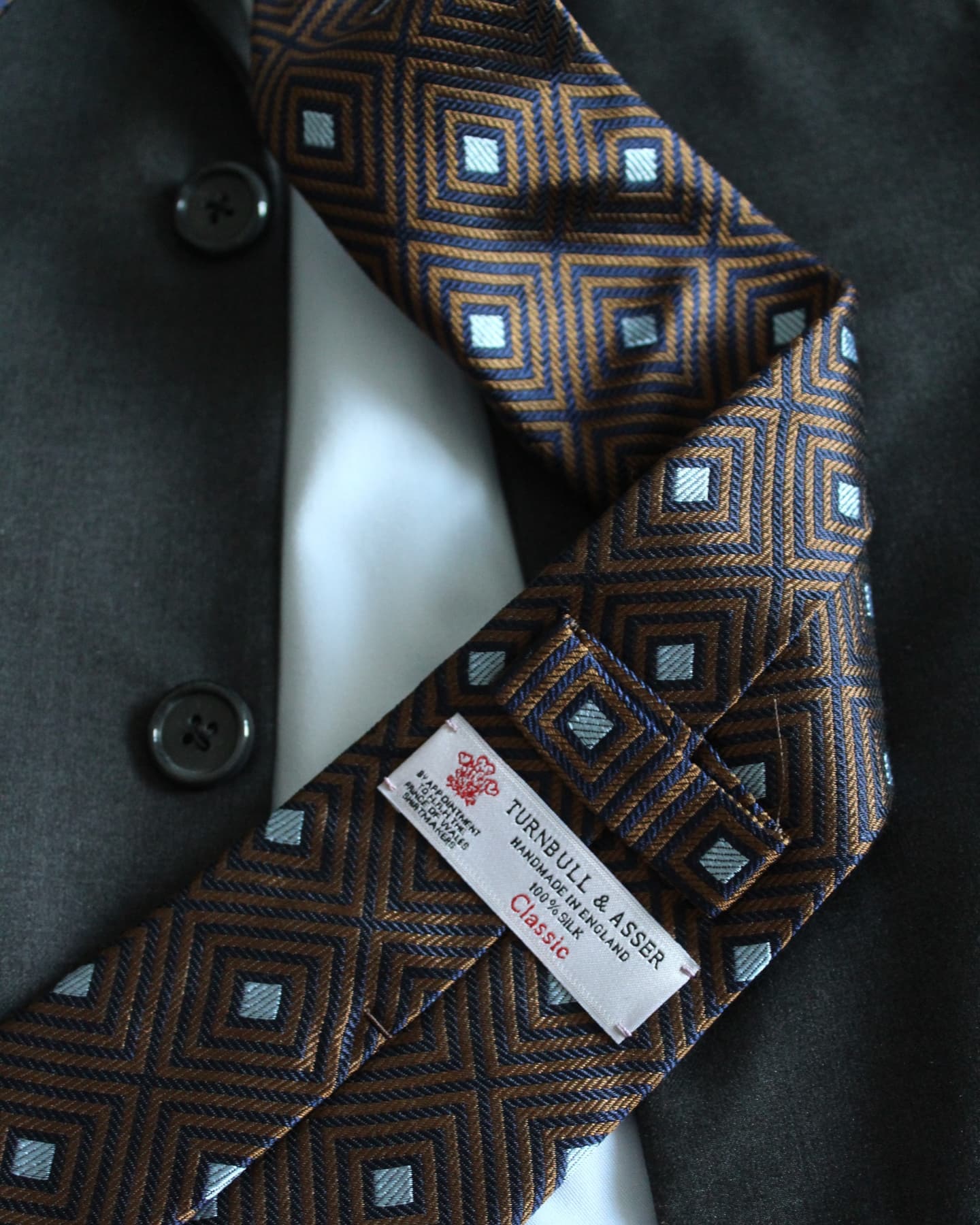 Some might choose a suit purely based on style. I have also done this, having a grey glen check suit made in the style of Daniel Craig’s in No Time to Die, back in 2019, and getting a silver tie bar as well. 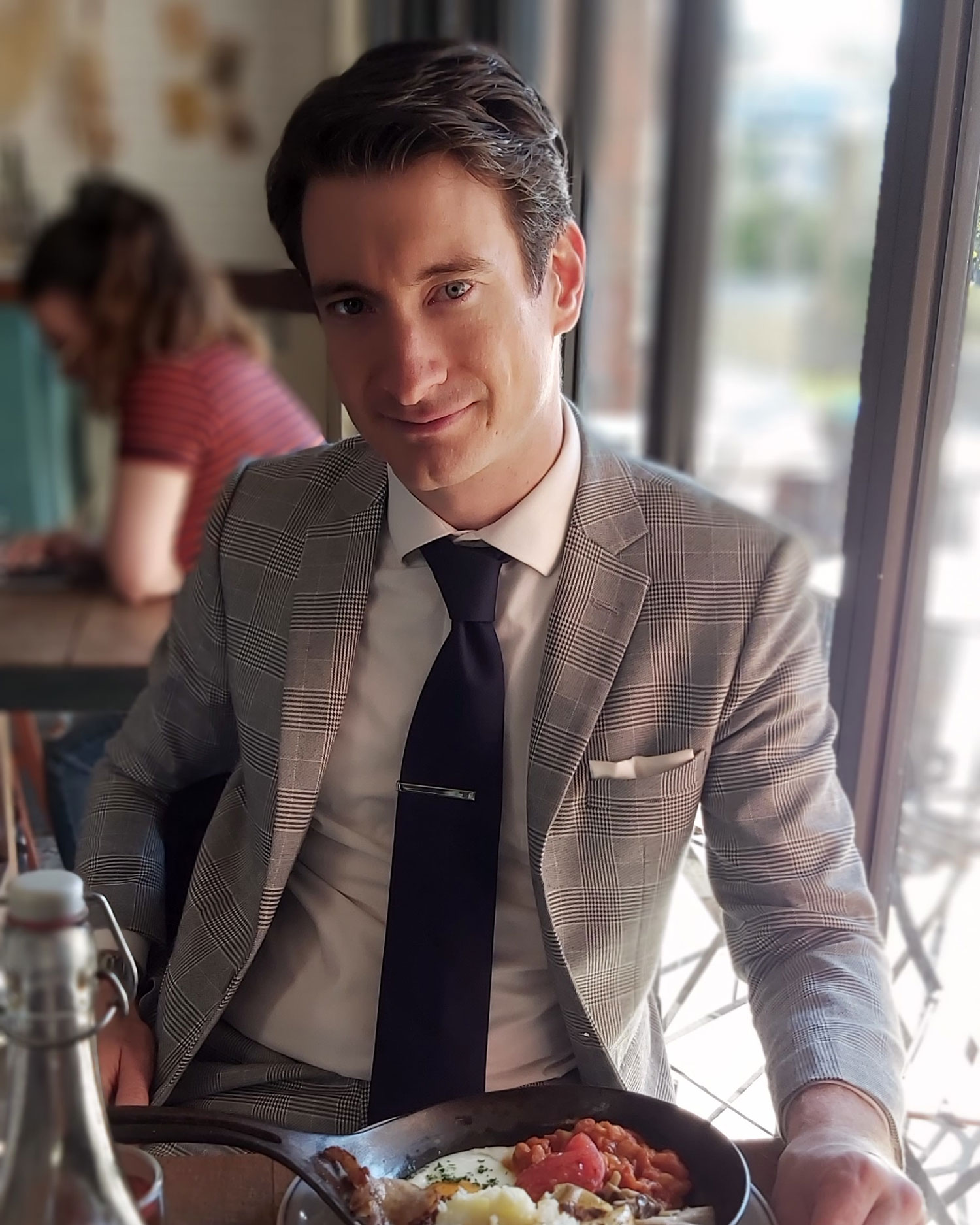 For this suit, however, I had the luxury of choosing it for both reasons. Watching Quantum of Solace in the cinema back in 2008 brought me into the ‘James Bond fandom’. Its high-octane intensity, grittiness and stylishness brought me in, along with memorable characters, great music, great performances, and Ian Fleming references. 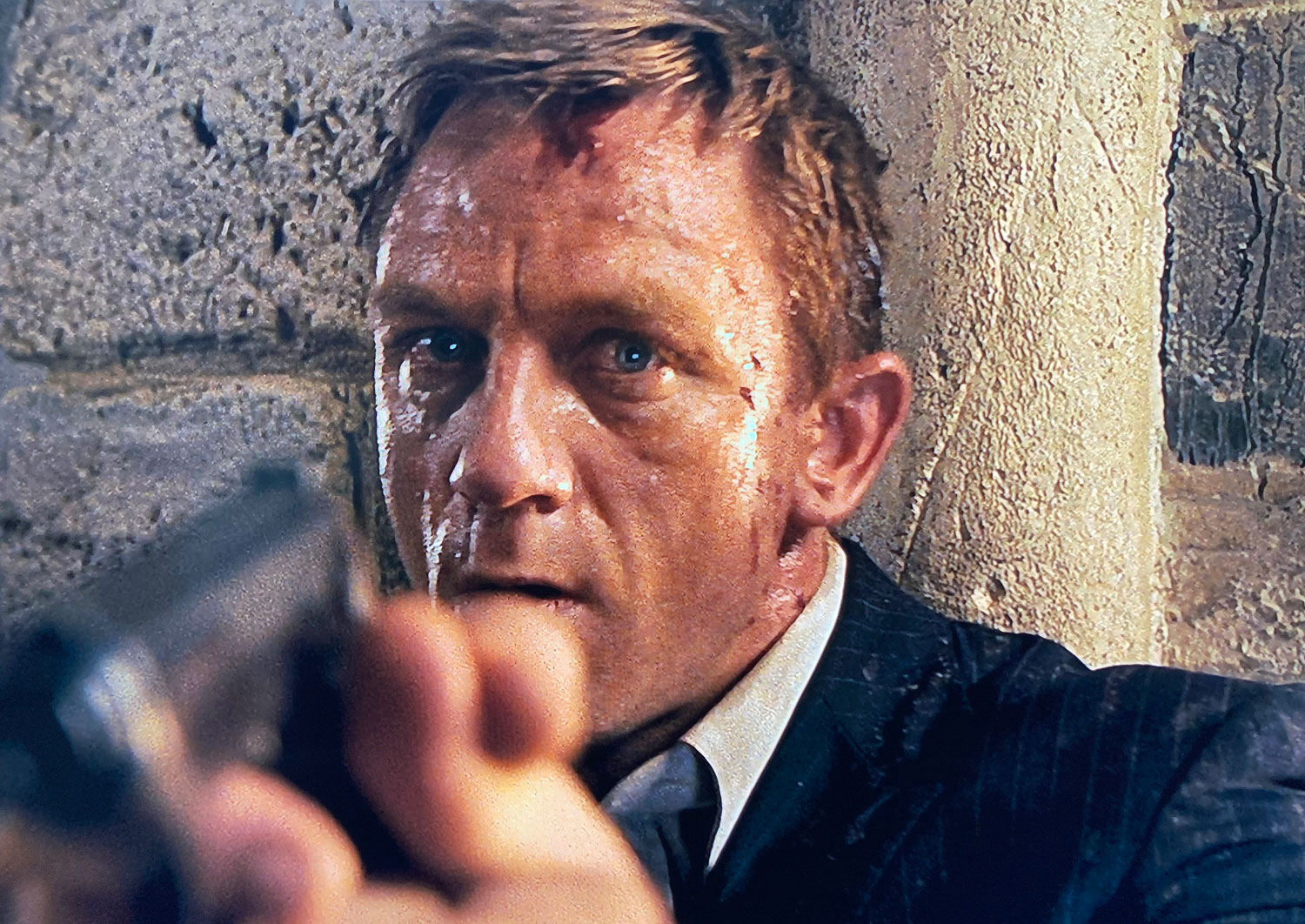 In fact, it’s the film that brought me into reading the original novels for the first time. The suits, to my mind, are still the best looking on Daniel Craig. The suits in 2006’s Casino Royale (a film that shockingly passed me by at the time) didn’t look right on Craig, to my mind at least. I felt the style which had suited Pierce Brosnan so perfectly looked a touch too ‘old’ on Craig’s Bond, as if he had borrowed the suit from an older relative. Perhaps this was intentional, given Vesper’s words in the memorable train scene.

Read more about the costumes and suits of James Bond in the book From Tailors with Love: An Evolution of Menswear Through the Bond Films.

Later films Skyfall and Spectre would employ fashionable cuts which conversely seemed too young for my liking! Tom Ford’s suits in Quantum of Solace hit the gold standard of being classic yet contemporary. The first suit in the film really brought me into the world of James Bond, so it was therefore the most fitting to have made. Besides, I needed a pinstripe suit. 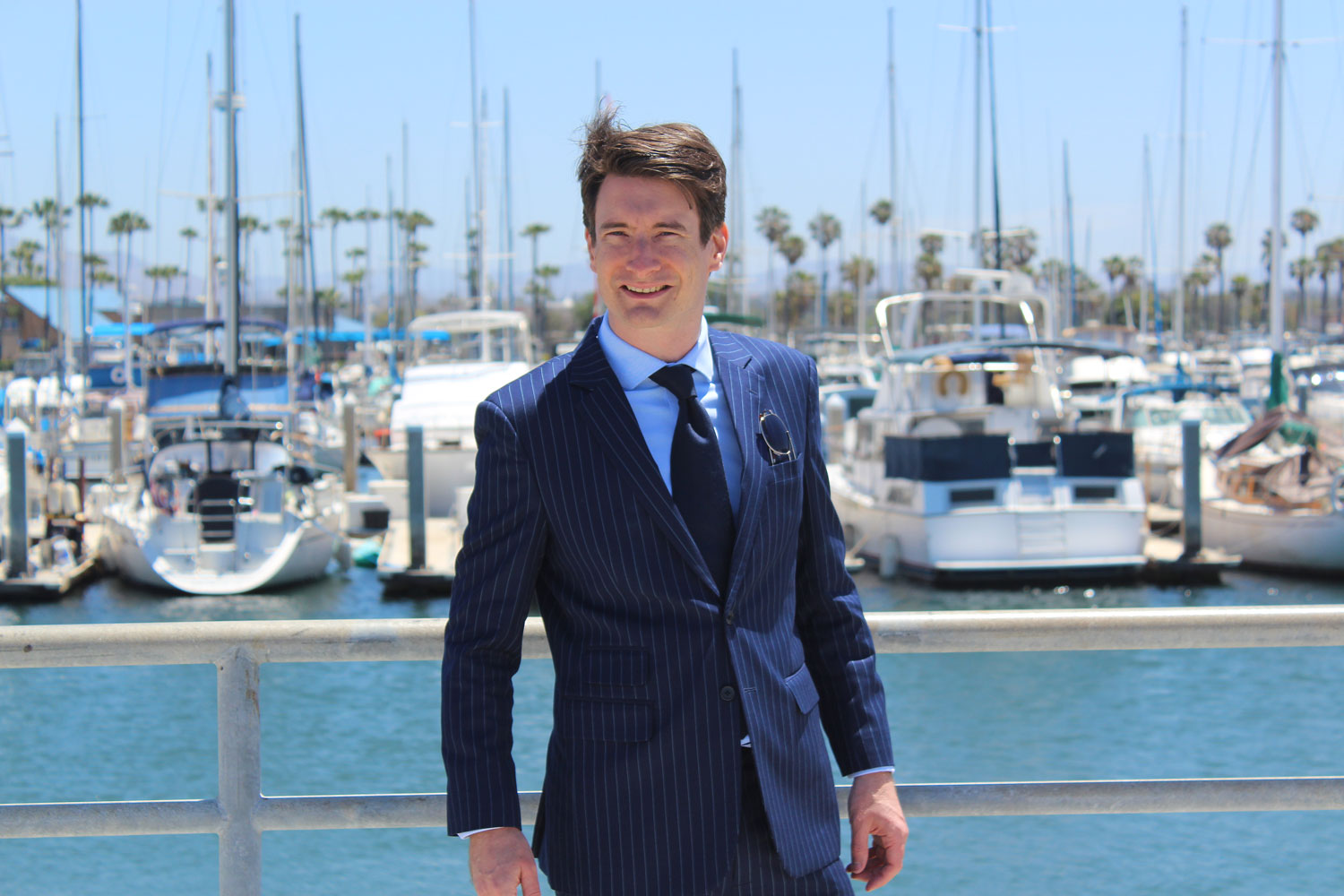 I went to my usual tailor, Ada in Shenzhen (Mainland China), which is where I lived and worked at the time. Her details are at the bottom of this article, and I cannot recommend her highly enough. 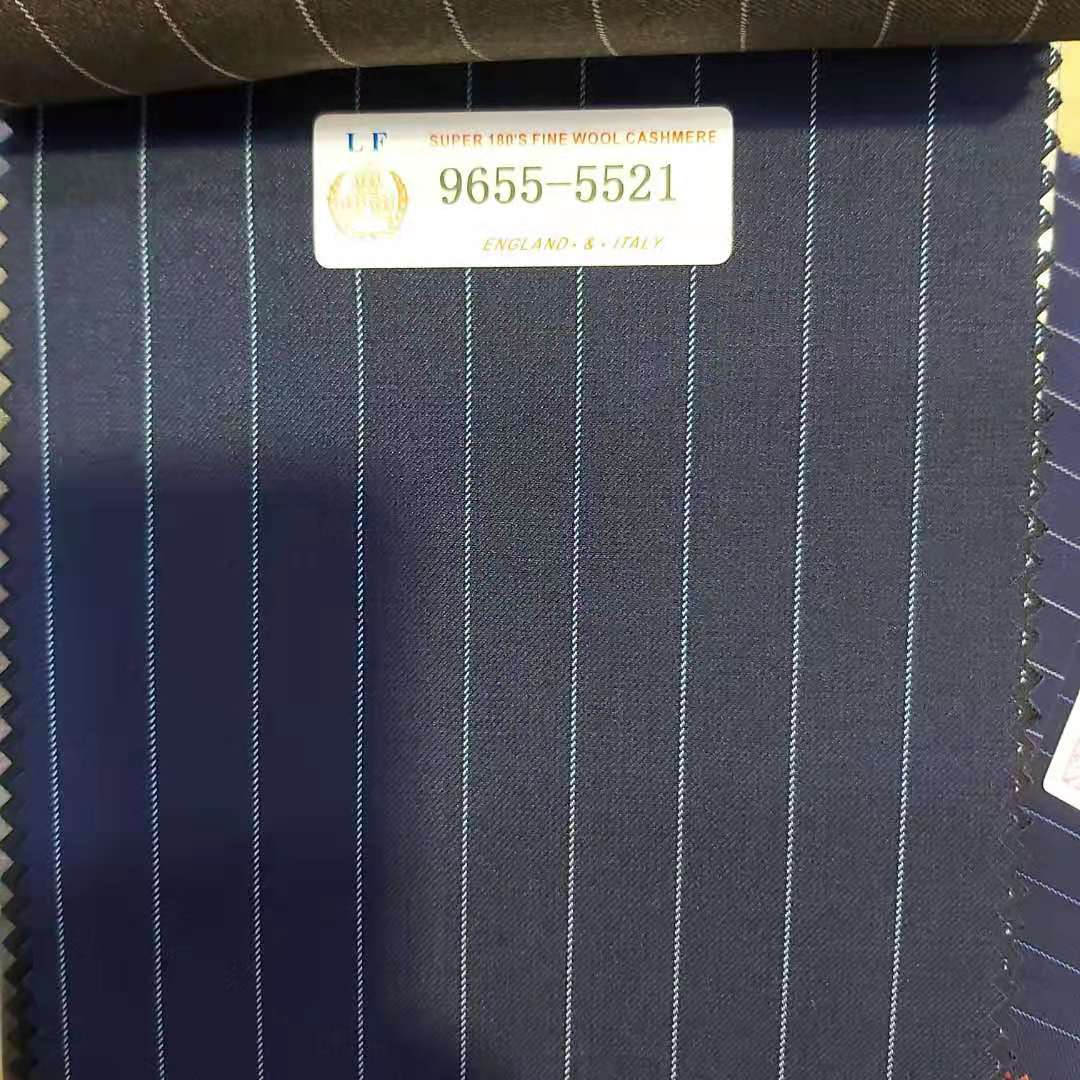 Choosing the fabric for a Pinstripe Suit

Since Quantum of Solace was released in 2008, and I was having this made in late 2020, I knew I would not be able to find a bolt of the original fabric, even if Tom Ford had not been using a unique source. So, this is one area where I was initially very happy to be flexible. The wool in the film appears to be fairly lightweight, which made sense for both Italy, the setting this is worn in in the film, and the tropics just outside Hong Kong where I was living.

It would be a winter suit for me, although by this time I already had plans to move to my current location, California, so that was also a factor. The weight needed to be light, so my flexibility came with the colour and design. 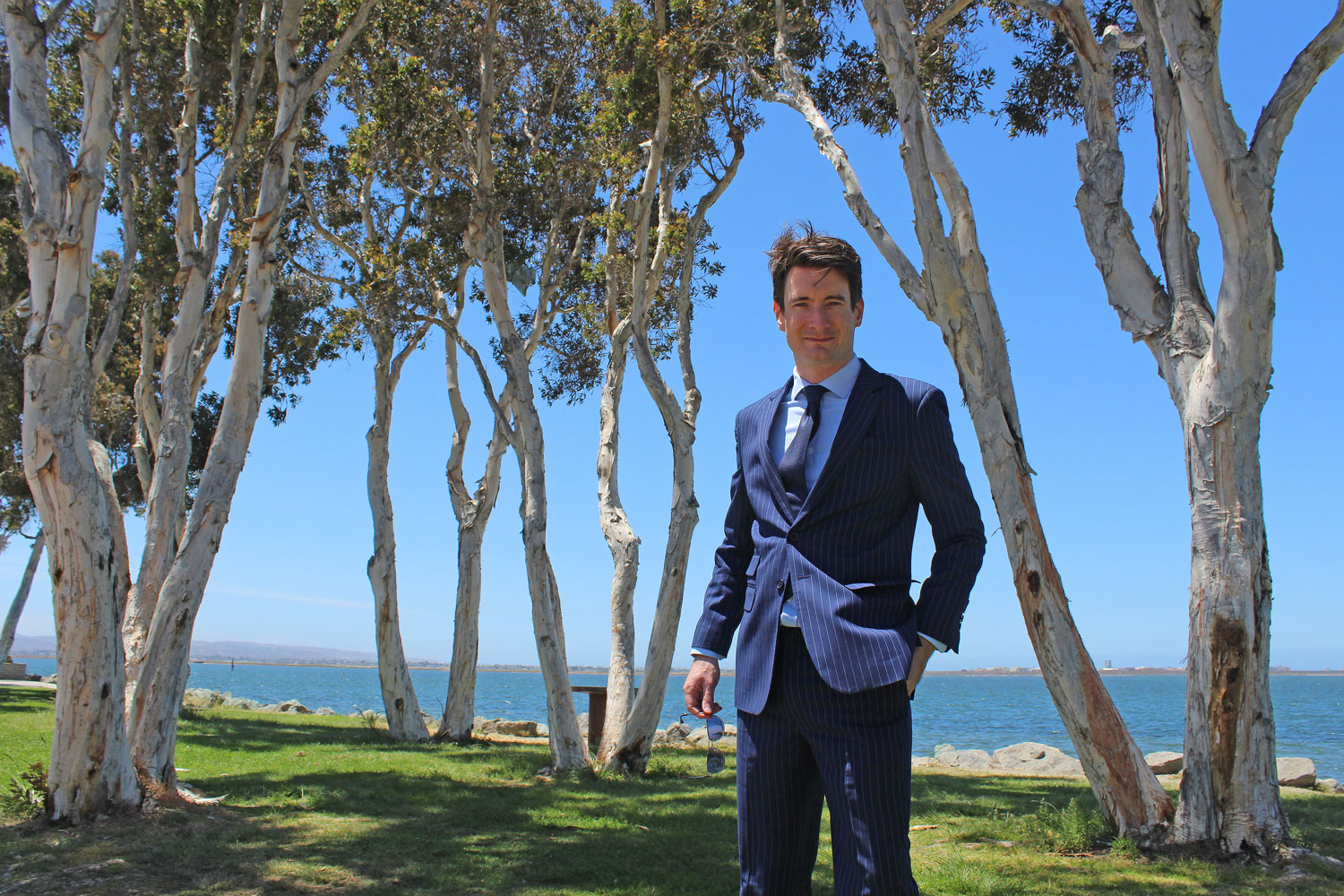 With help from Matt

I had really liked the chalk-stripe suit worn by Ralph Fiennes in Spectre, so I did consider something along those lines. As it transpired, I was able to find a light blue pinstripe on a blue fabric, very close to what is worn in the film. For the colour match I relied heavily on the blog by Matt Spaiser, Bond Suits. That’s because in the film, we never see the suit clean.

From the first shot of 007 driving, it is covered in dust, hiding the vibrancy of the suit colour. I decided to match the vibrancy rather than the darker, dustier colour it appears to be on film. The unusual light blue of the pinstripes is what really helps my chosen fabricmatch the one of the original Tom Ford suit. In fact, the fabric was an English-Italian blend, super 180s fine cashmere wool, very suitable for a British agent in Italy. 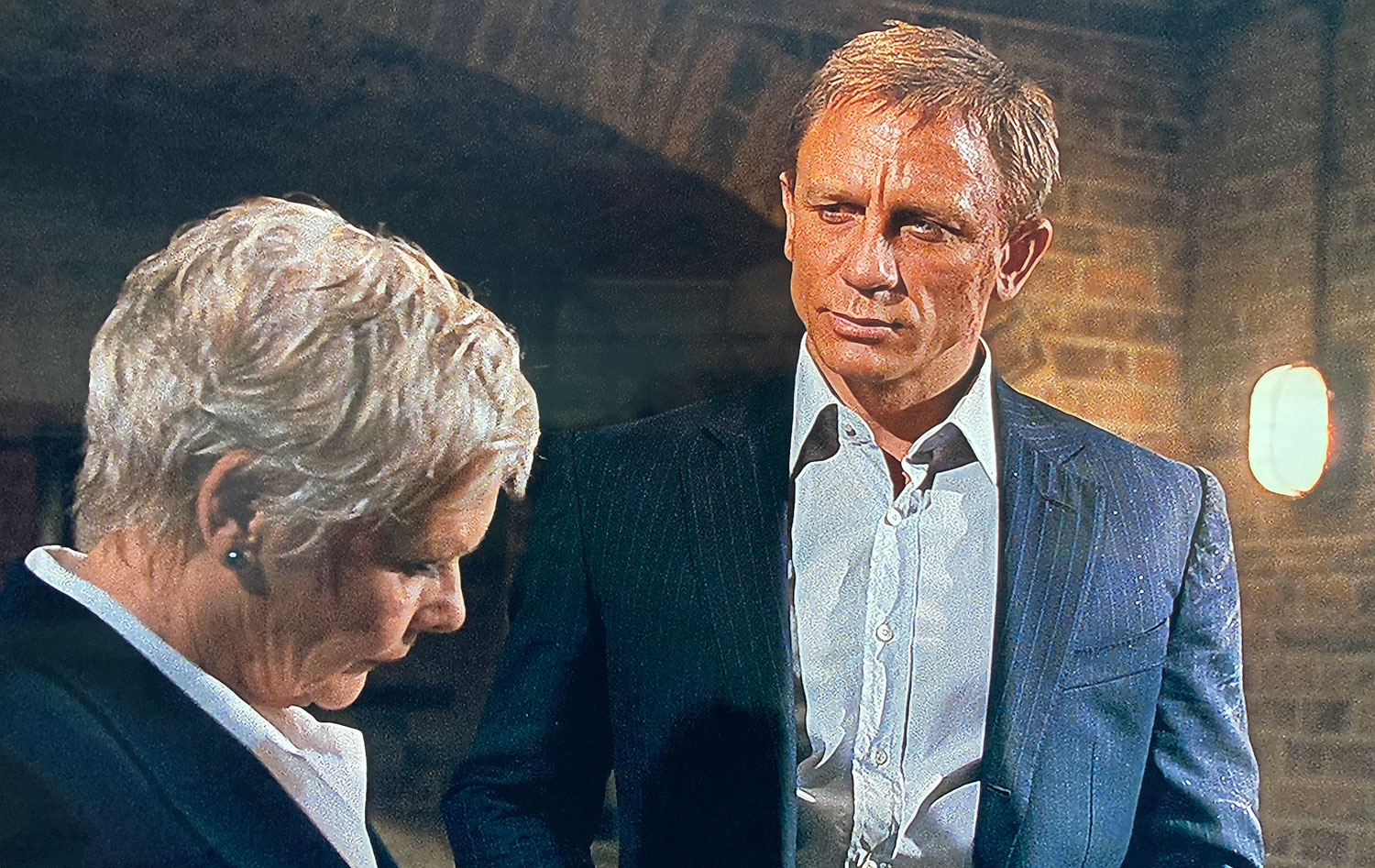 The fit and the details were the next to zero in on. By this time, I had known my tailor for more than five years, so we had plenty of previous suits for comparisons. I had used suits from Quantum of Solace as a guide for previous suits, as well as experimenting with slimmer styles, and styles based on designs seen in The World is Not Enough, On Her Majesty’s Secret Service, and even two safari shirts from The Man With the Golden Gun. The fit would prove to be the easiest to agree upon, and as a regular customer, my suit fitted perfectly first time. This left details to consider. 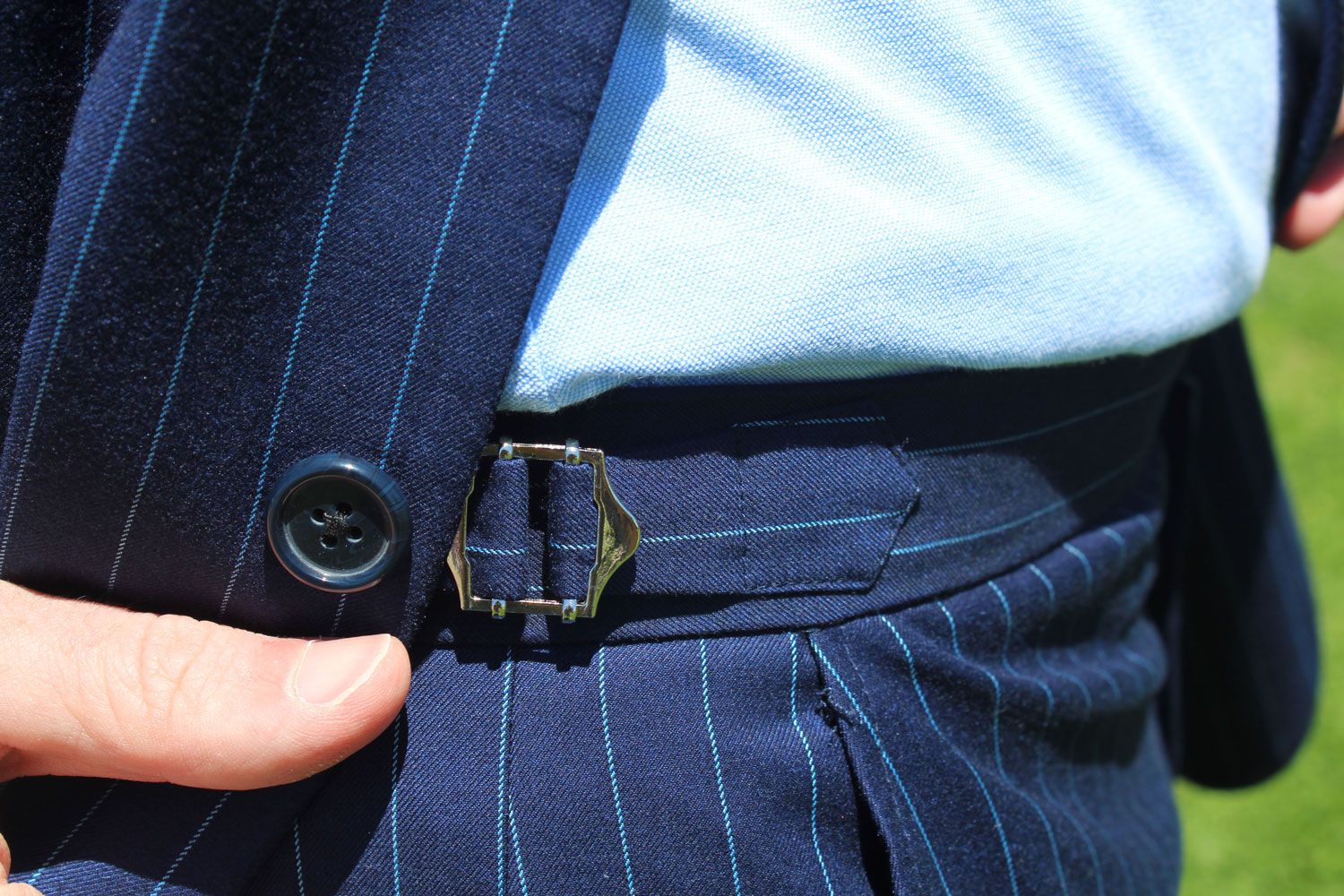 The suit trousers have side-adjusters instead of belt-loops. Ada had already made trousers for me in this style, and we both liked them. The original Pinstripe Suit had a ticket pocket, which I also prefer for almost all my suit jackets. One detail I was not keen on was that the suit jacket had a redundant third button, scarcely visible in the film, but apparent when the same model of suit is on display in Tom Ford shops. I preferred to do without this, and again this was something Ada and I could easily agree upon.

One detail that separates this suit jacket from all my others is that there are five cuff buttons, the one neatest the cuff being larger than the others, and is generally left undone as with the hero jacket in the film. All buttons function, but I leave the others done up. It is a special detail, and one that helps make the suit unique, although I must admit, you’ll need a very keen eye to spot it in the film. It is apparent in some of the driving shots.

This jacket was one of my final pieces to have made before leaving China earlier this year, and moving to southern California. I have worn it to church, where it felt very appropriate as Sunday best. I have worn it to social occasions, and on a trip to a local art exhibition.

The light weight of the fabric helps make this appropriate for the warm climate here, which is very similar to the Mediterranean.

The colours have made it feel ‘brighter’ and more appropriate for social occasions than ‘duller’ colours might have been. I am glad I was able to find the ‘blue on blue’ stripe, as it feels ‘fresher’ than the more traditional white pinstripe or chalk stripe. It is also a very comfortable suit, just to wander around in or sit in, more than most of my suits. This may be the fabric, or more likely to my mind, the classic cut. I do have slimmer pieces, but this suits my figure the best, I feel. 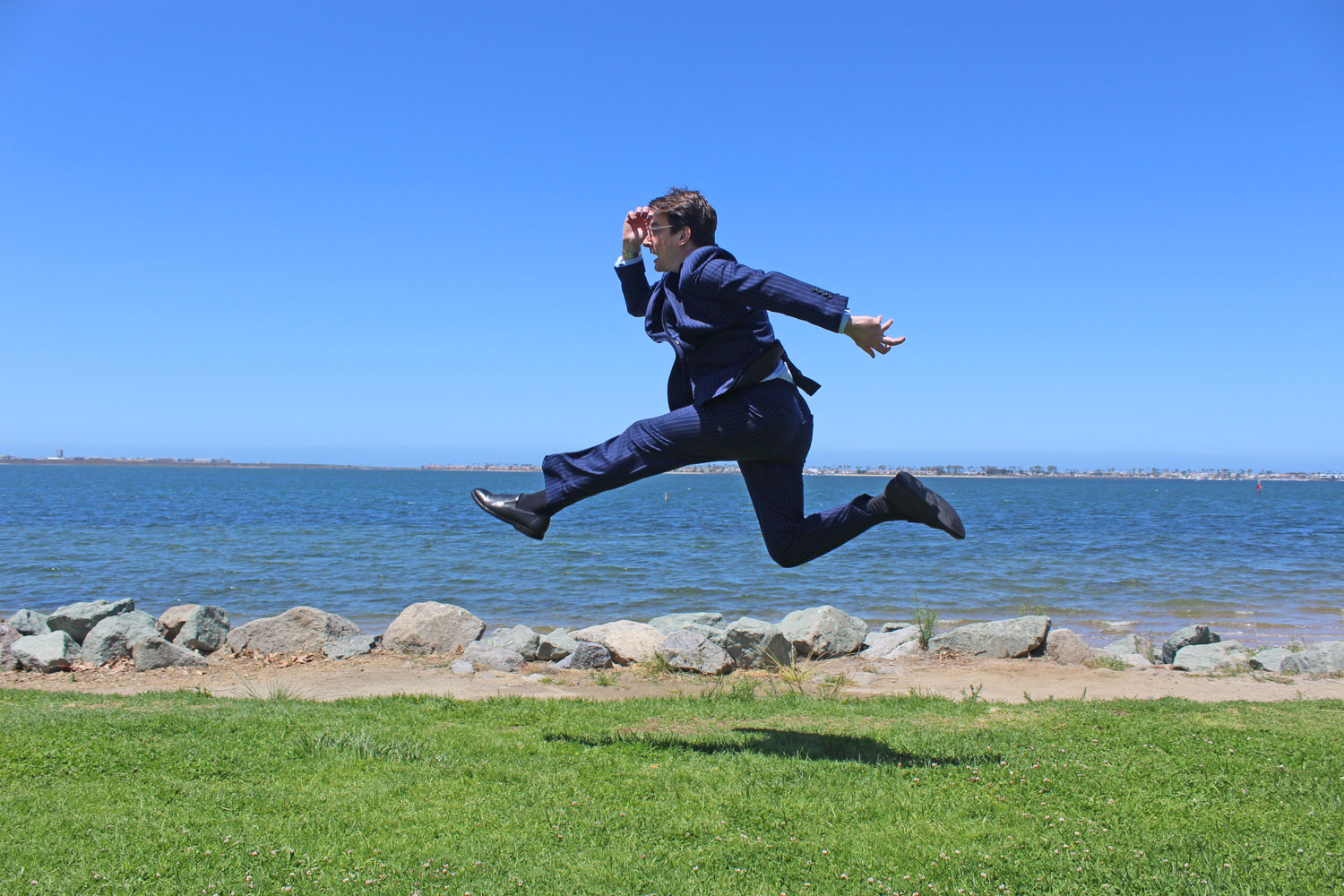 Overall, I am very happy that this 2008 design works so well in 2021. It is testimony to Tom Ford and costume designer Louise Frogley, that it still hold up so well. Credit, of course, must be given to my own tailor, who interpreted a suit seen on Daniel Craig and adapted it to my (very different) figure perfectly. I feel very fortunate in this. This was my favourite suit from a favourite film, owning it is a joy.

The first time I wore it, I couldn’t help but have images from the film in my mind, but the more I wear it, the more it simply becomes mine. If I looked remotely like Craig, I might worry that this is a cosplay, especially as it really does work best with a light blue shirt and navy tie, as in the film. As it is, I am very happy to have a Pinstripe Suit which was inspired by 007, but is ultimately, uniquely mine. 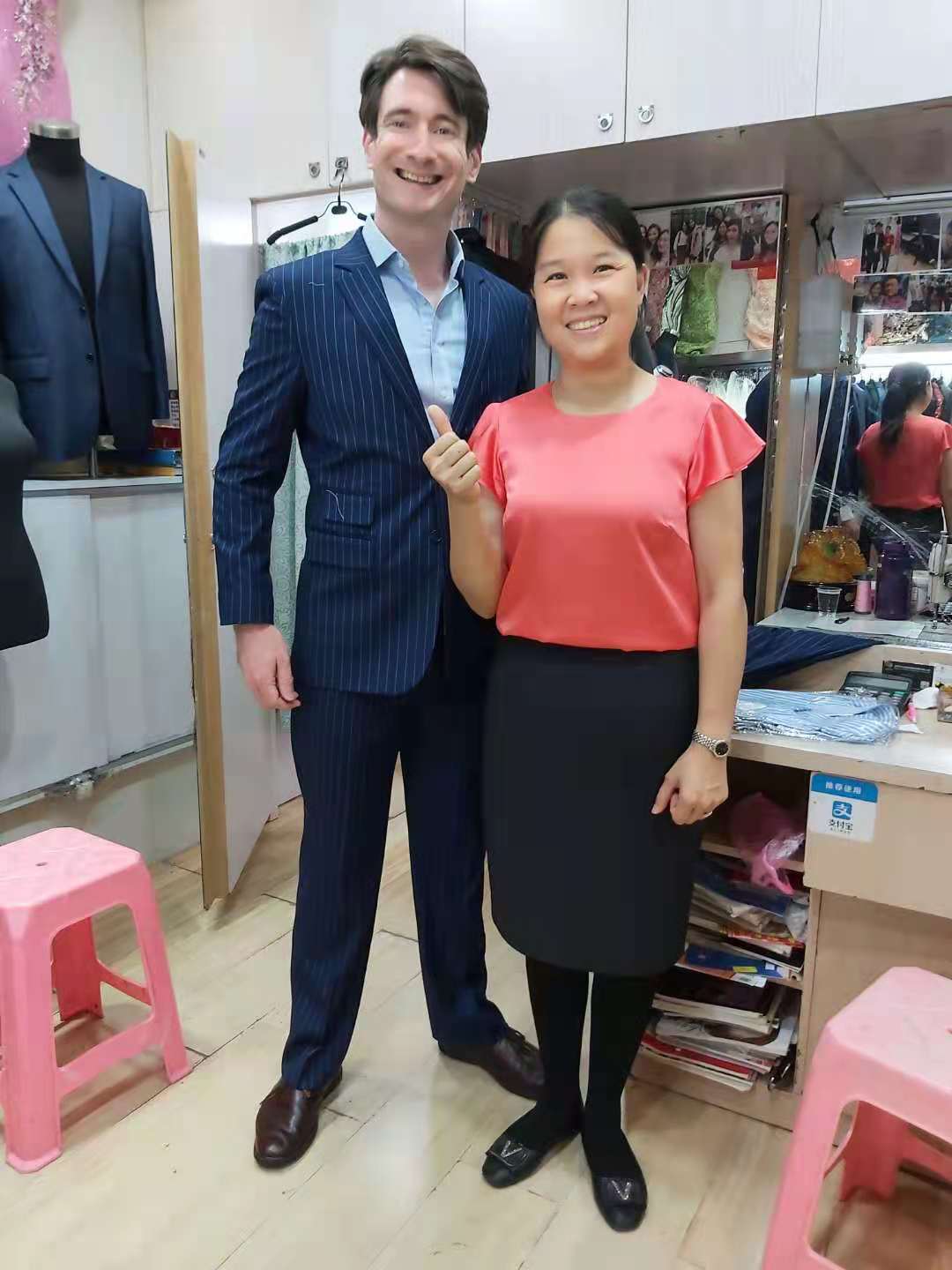 Thomas in his bespoke Pinstripe Suit with his tailor, details below

Article by Thomas Felix Creighton, be sure to follow Felix on instagram. Images of Daniel Craig sourced from the Blu Ray of Quantum of Solace and used here under the fair use doctrine.

By Br007ker|2021-11-07T17:13:02+00:00November 1st, 2021|Agents, Quantum of Solace, Thomas Felix Creighton|Comments Off on Remaking the Pinstripe Suit from Quantum of Solace a Bespoke Experience with a Cantonese Tailor