I do think he [Jason Statham] was very happy with all of his looks for the whole film.

Parker is a movie more about what Jennifer Lopez is wearing, (or not wearing) than it is about anything that Jason Statham has on. But we’re here for the Statham style templates, not the J-Lo polka dot underwear review. Sadly.

Well actually let’s talk about that scene where she gets her kit off. When Parker asks Leslie Roberts, (played by Jennifer Lopez) to strip to ensure she’s not wearing a wire (that old chestnut) then we get to see a rare brand logo on a jacket in a film. These are often removed. 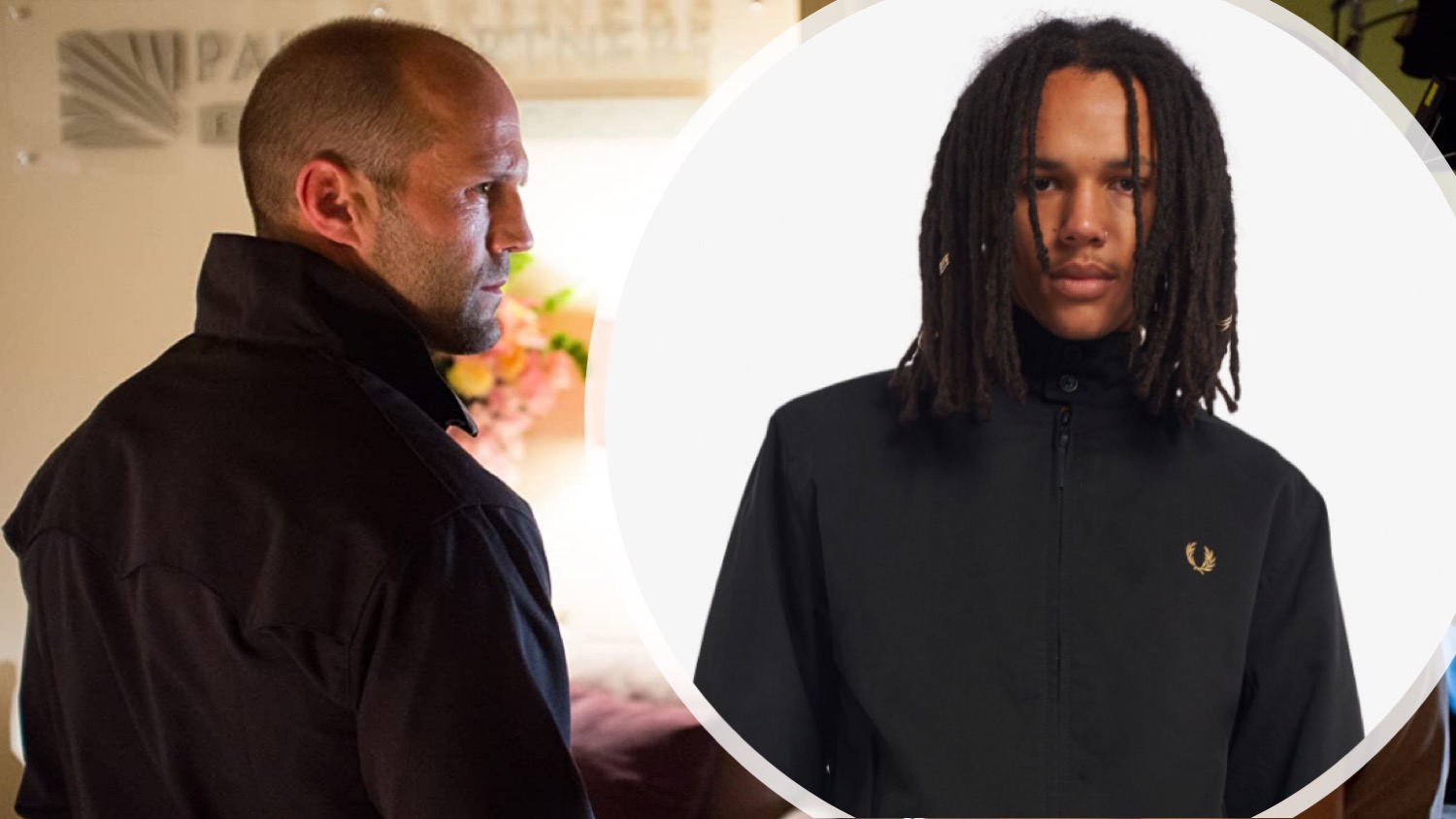 However, we can see Parker is wearing a Fred Perry Harrington as he ogles Roberts as she twirls coquettishly in front of him. The back has a western yoke, crafted from a soft shell fabric and he wears it with the collar popped. This Harrington jacket is still readily available through the Fred Perry store. 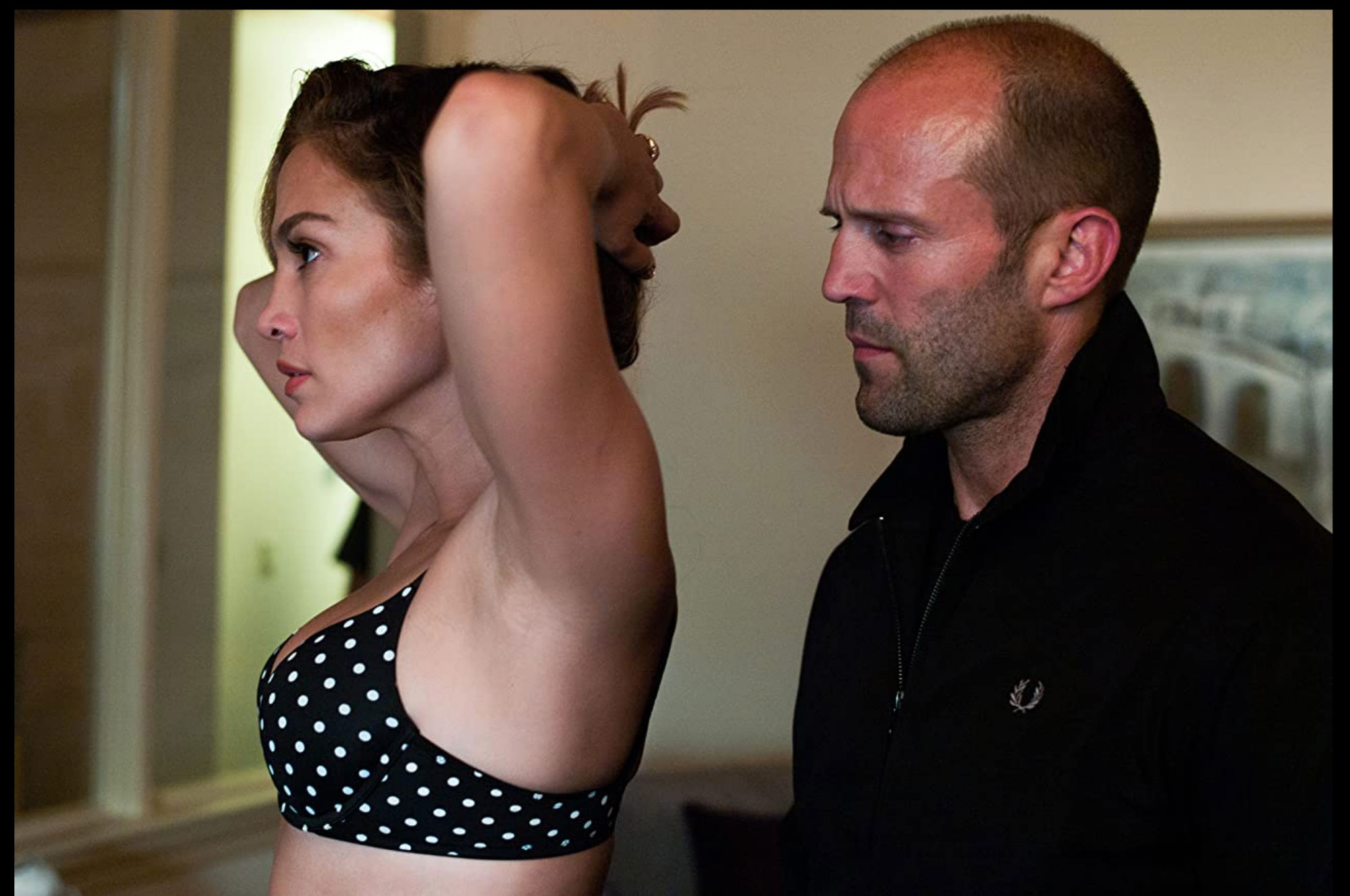 When on the run Parker steals an I Love Boston baseball cap. I couldn’t find that anywhere. The heart looks like it has some baseball stitching running through it. He also acquires a checkered flannel shirt. A lighter construction than the ones he wears in Homefront.

Almost any brand will do checkered shirts, but if you’re starting on a budget then Wolverine do a 98% cotton 2% spandex blend flannel shirt starting from 28 GBP on Amazon. Also check out another site called Country Outfitters for that all American look. 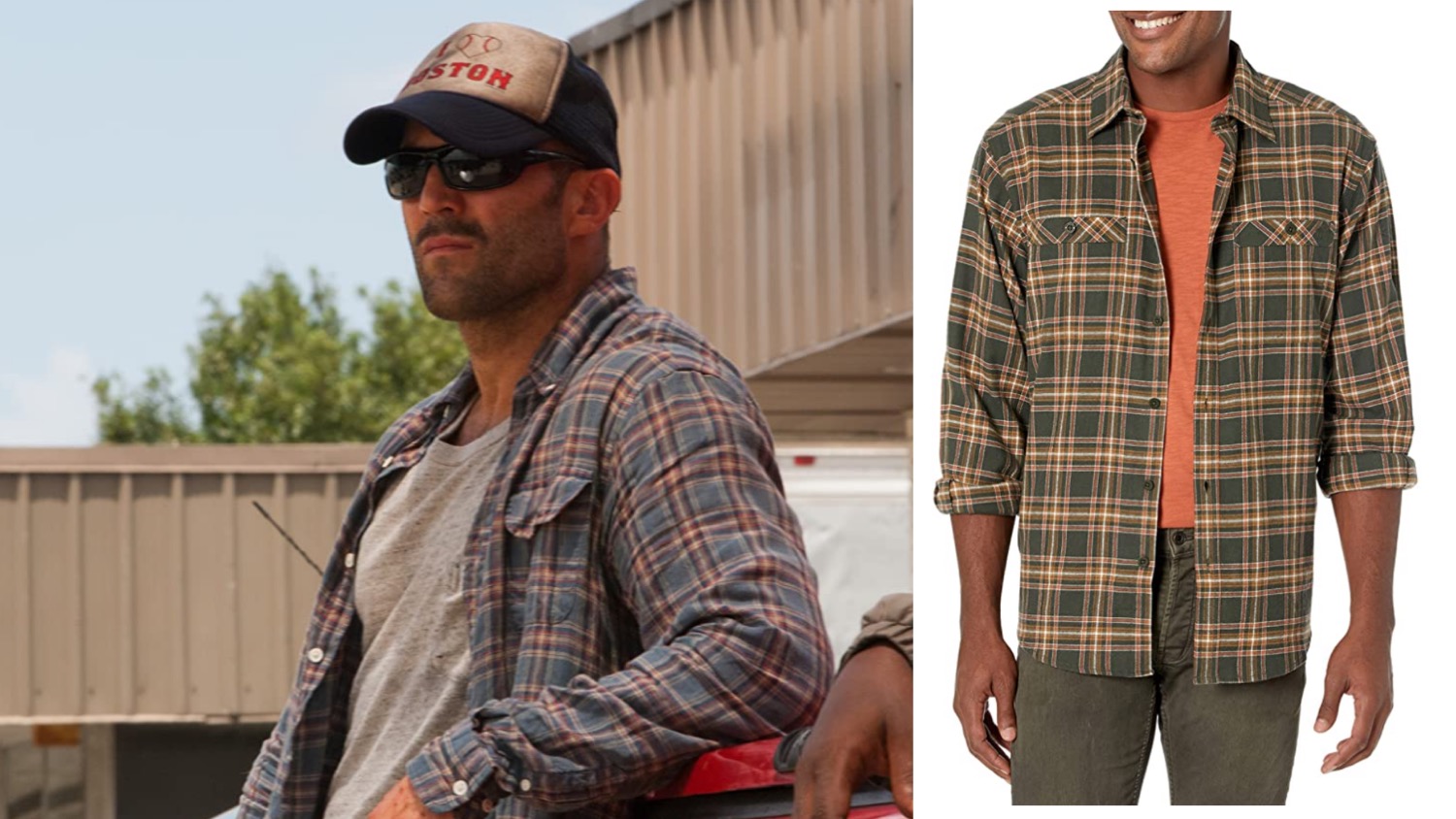 When I saw those Sunglasses I immediately thought Oakley, but there are other frugal alternatives. I think these sunglasses suit cap wearing more. But without a cap I prefer the AO Eyewear Optical Aviators that I think he is wearing in Wild Card. Also available on Amazon. 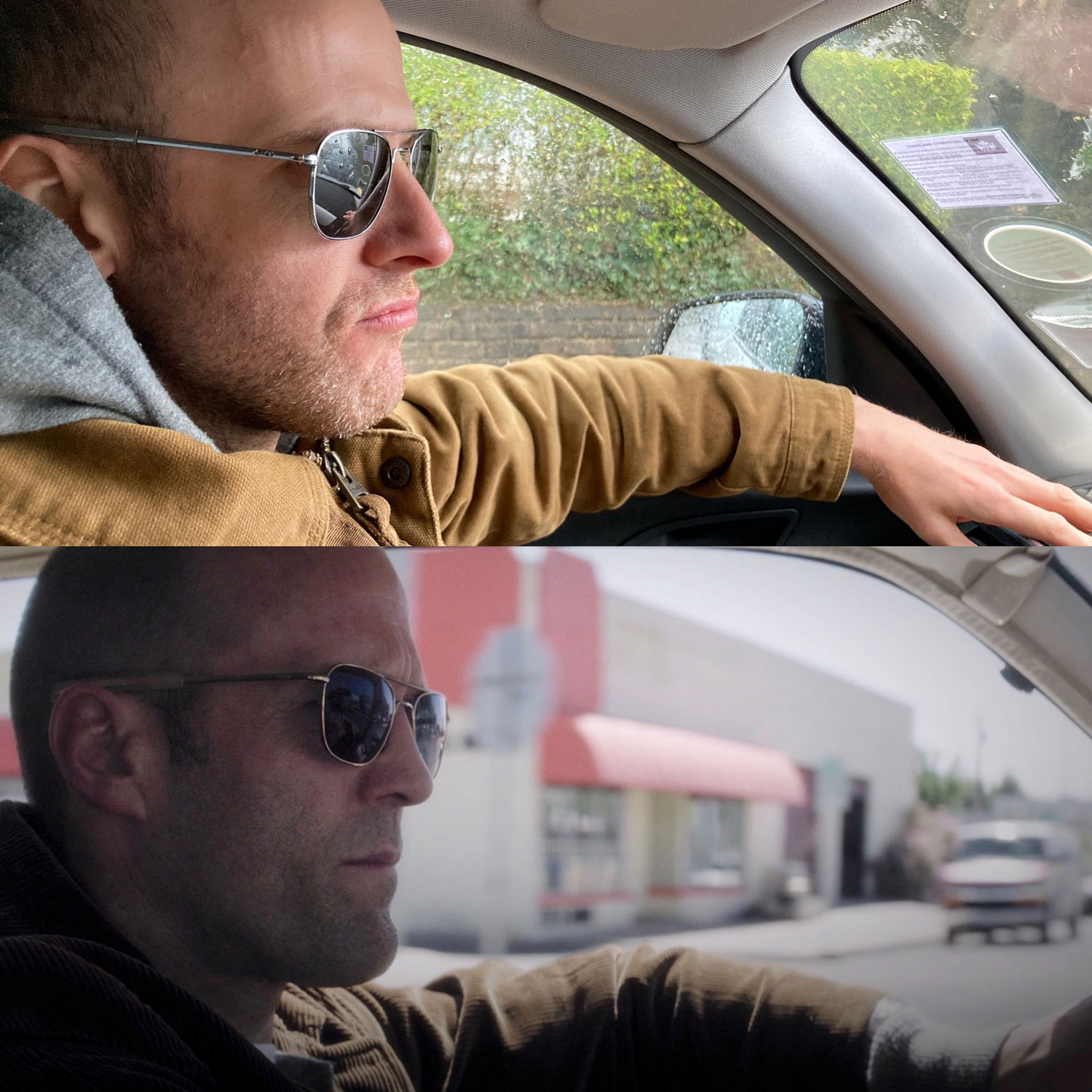 For a meeting with Nick Nolte’s character Hurley, Parker is wearing a sage green field jacket. It’s slightly unusual in that it only has 2 square breast pockets and no skirt pockets. (Unless they are unseen side pockets). A quick look on the Google Lens brings up this Mens field jacket from WenVen starting at 45 GBP on Amazon. 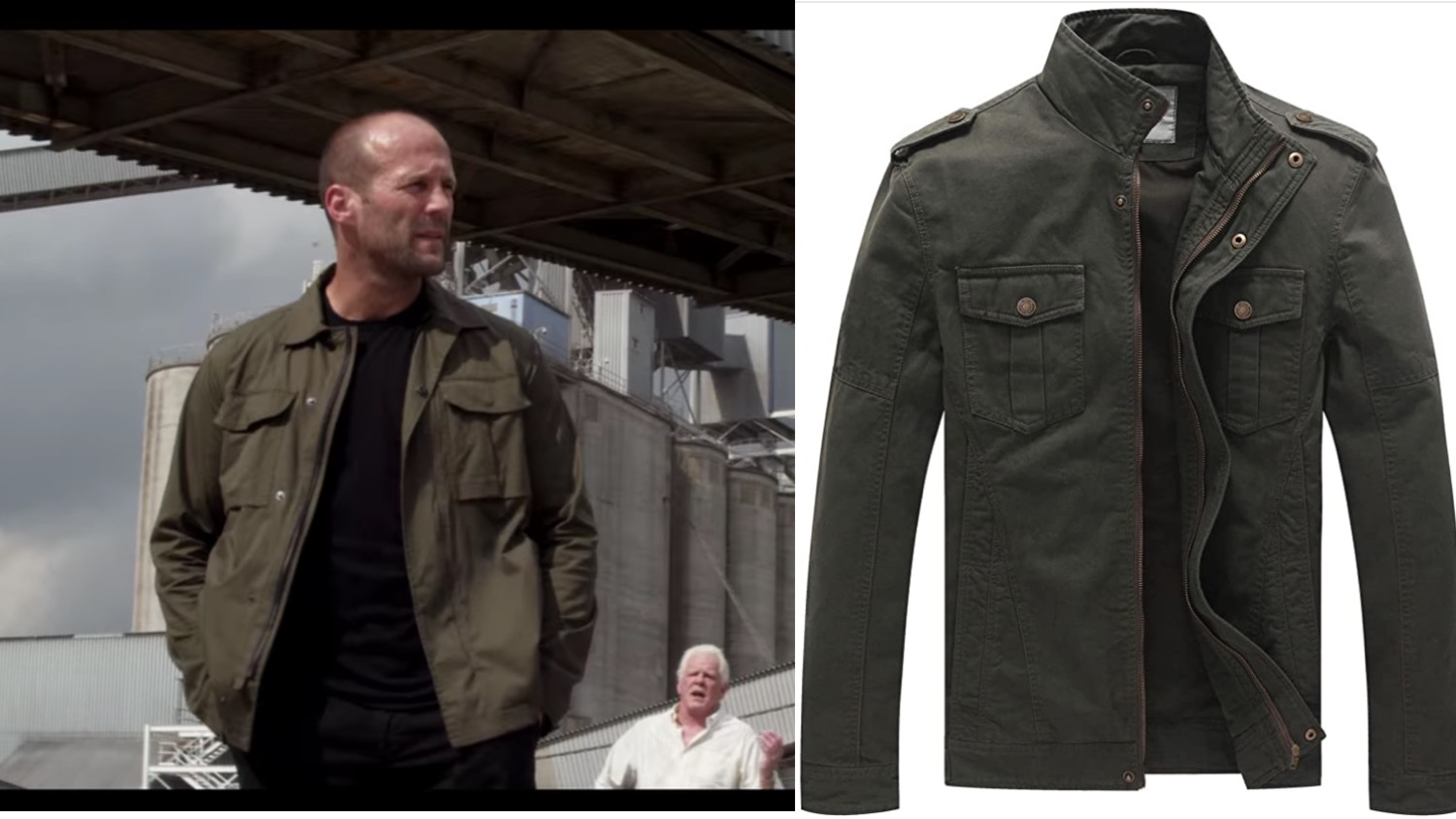 But when it comes to green field jackets Private White is the first brand that comes to mind. Although there is nothing close to this exact look this season. I interviewed the founder James Eden for Menswear Style. 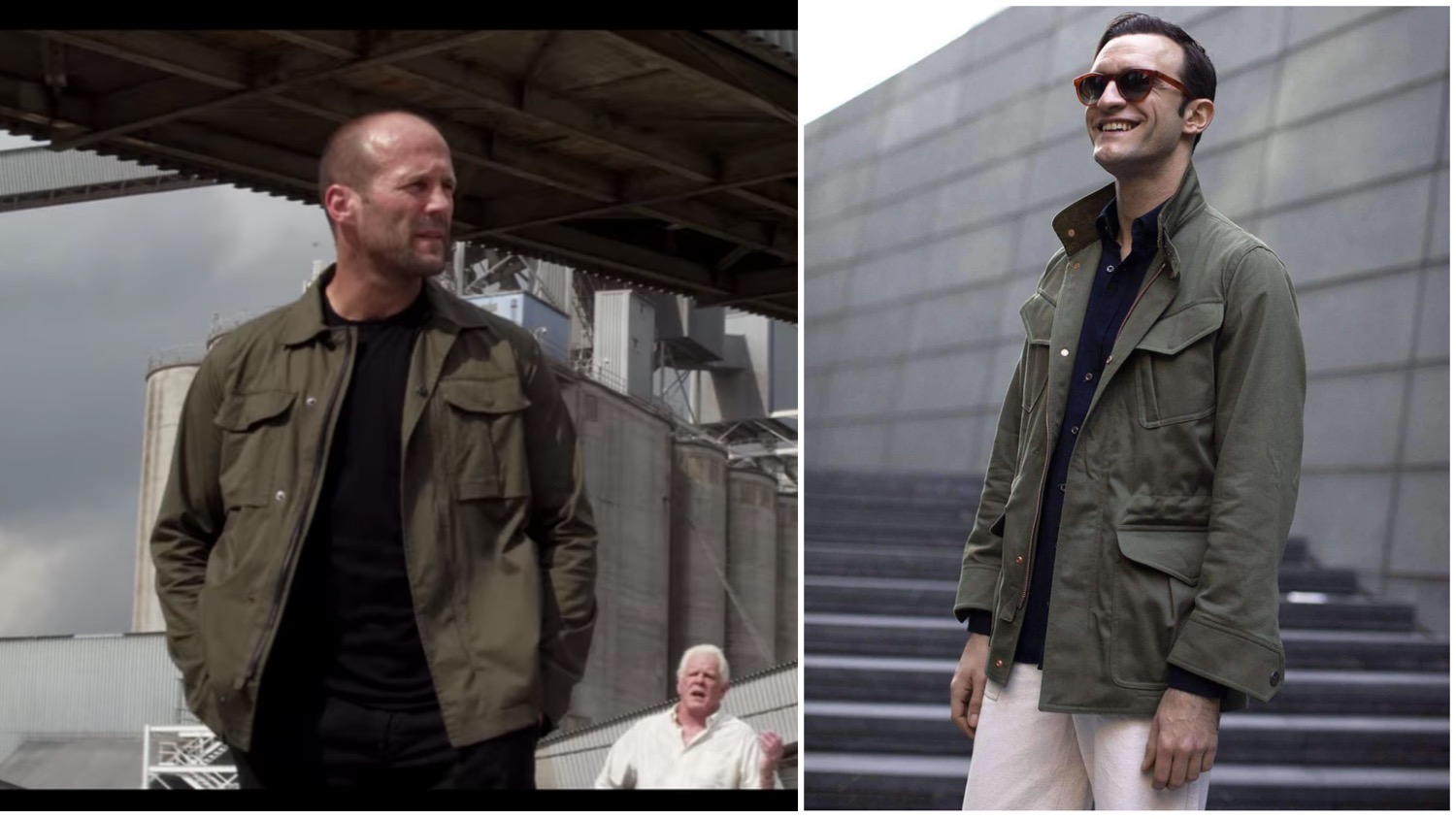 I own a Frahm Harrington so am always happy to plug the brand. You can check out their green worker jacket adapted from a chore jacket. I haven’t managed to find a close match with this jacket but please DM me on INSTA if you come up with any yourself. I prefer the ones I have suggested, the one Jason wears does not beautify him IMO. 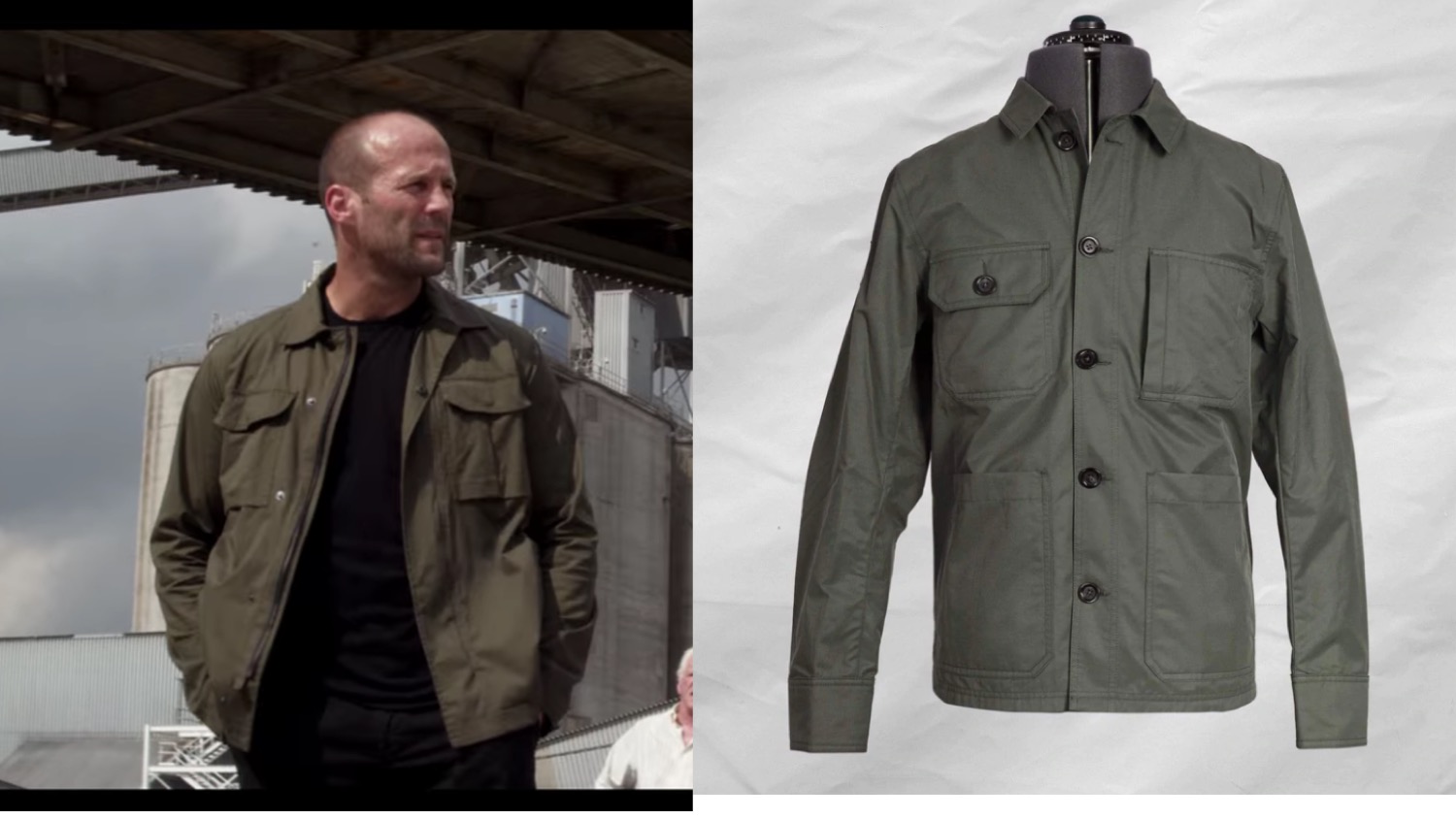 Perhaps the most iconic look of the film is when Parker goes to Palm Beach, Florida, arriving in a more buttoned up style wearing a loosely constructed blue suit with no tie. In the latter scenes he is wearing another light blue check linen suit by Burberry with a slanted breast pocket and double vents, both with a signature cowboy hat.

I have reached out to Melissa Bruning the Costume Designer for an interview so far nothing back. But you can see more of her portfolio on her website.

Bailey Hats do a Cowboy Stampede Hat for 100 Dollars. Or a cheaper one for fancy dress can be found on Amazon by Boland. 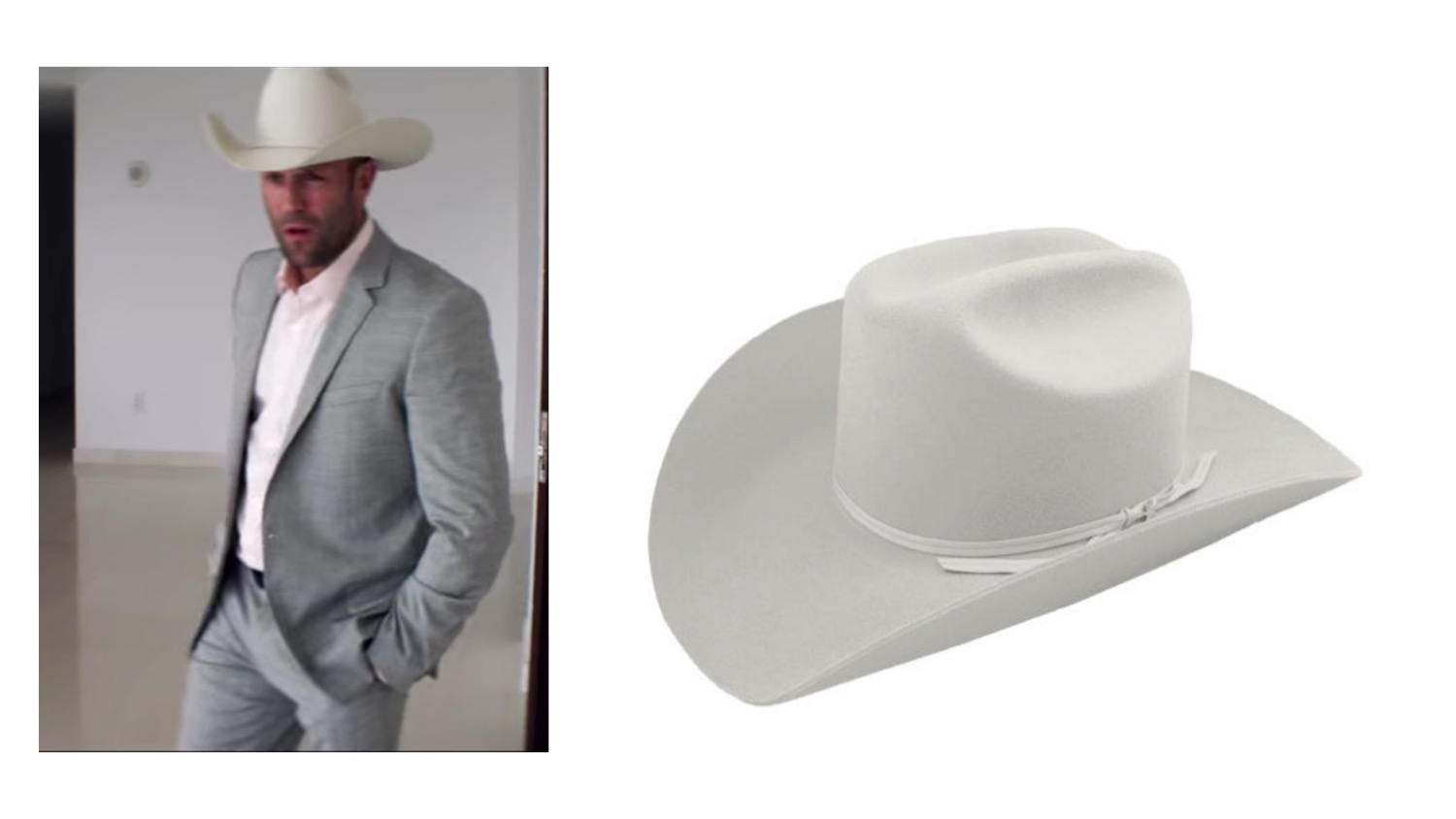 Costume designer for Parker Melissa Bruning came on the show to talk about her career. She talks about Parker in our chat found on YouTube and on the podcast. (All links in the show notes here). Here are some loosely transcribed moments when she speaks about Parker.

MB – Jennifer Lopez keeps all of her clothes, it’s in her contract. At least at the house that I was at she had this gorgeous closet with with shoe racks and the dresses all lined up. Pretty amazing.

[Jason Statham] is consistent that he feels good about [what he is wearing]. And then he doesn’t have to think about what he is wearing, he can think about acting. The nice thing about this piece [Burberry suit] was, he’s a chameleon in this. He has to assume these different identities. It was a nice chance to go shopping, and get him in some new brands and just do a bit of a 60s throwback to the original series. And I think he was game. 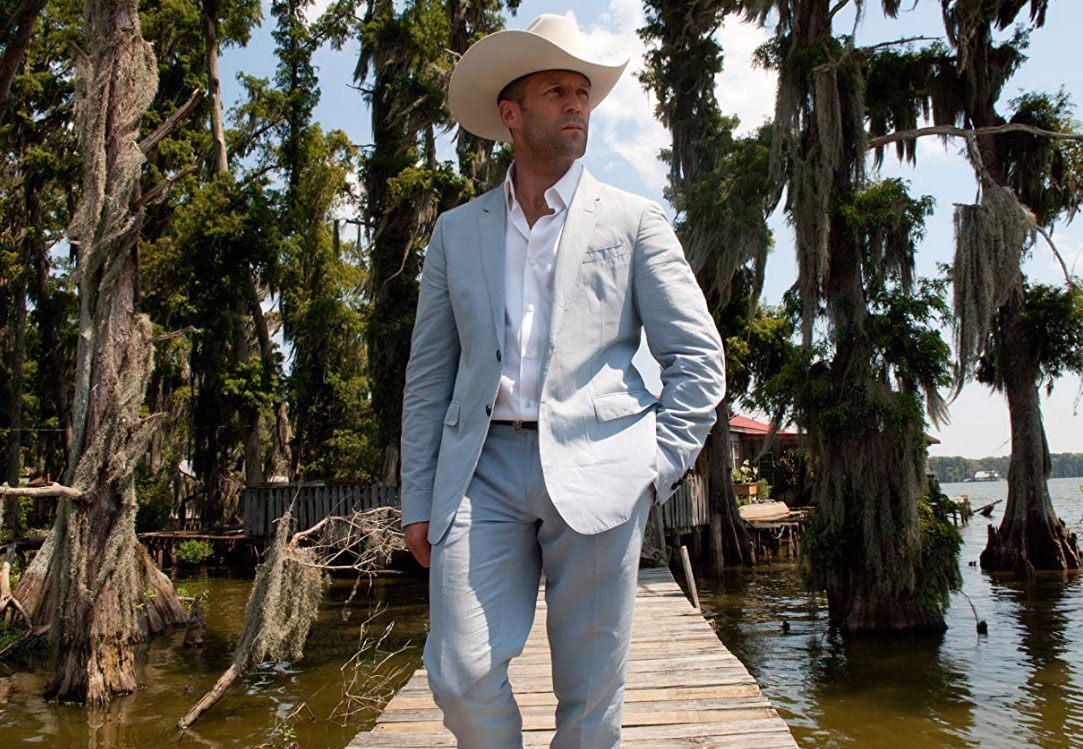 You know, he’s very muscular. I meet him in early prep and I take measurements and all that. Then by the time I go back to do a costume fitting a couple weeks later, the guns are out. And I’m like, Oh, we have to order all bigger sizes and re-tailer it.

That’s the thing that most costumes that you see on lead actors and films have been tailored, right? They’re not off the rack.

Jason had those boots, they’re black and white snake boots. He couldn’t do the whole fight in those boots. He was gonna die. So we had his sneakers and we made a boot exterior to go over them. I took some fabric from some handbags and we stitched it together and made the fake heel [by] gluing it on there. Because you have to come up with solutions, right?

I need to feel like I’m not gonna fall on my ass. I need to have this sort of structure. It’s like, okay, well, how do we do this, guys? Let’s, you know, let’s give everybody what they need. – Melissa Bruning. 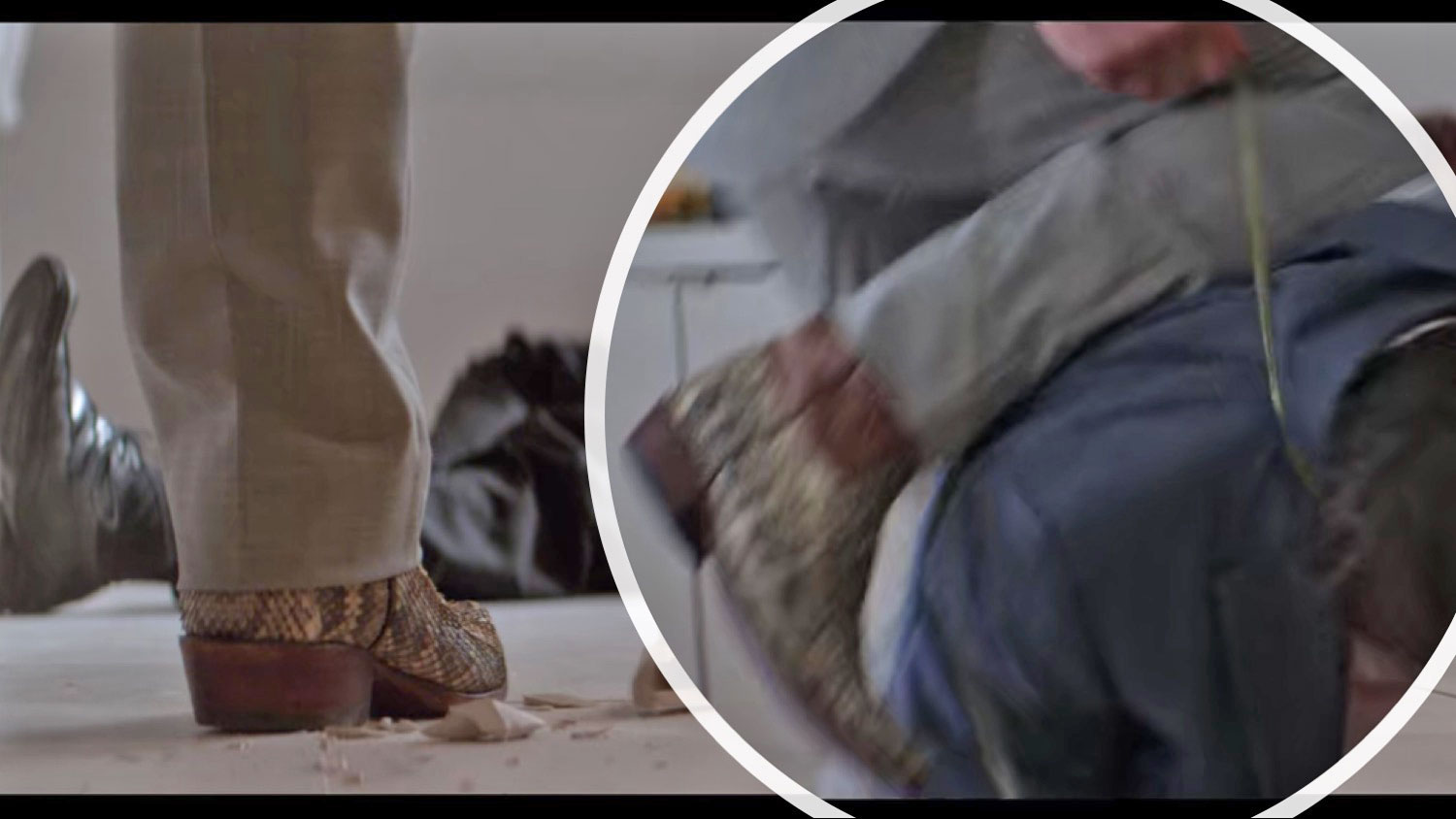 The retail price for the rose gold Richard Mille RM 011 Felipe Massa that Parker is wearing when in disguise as a Texan is approximately $115.000 USD.

Parker is adapted from Flashfire, the 19th Parker novel, written by Donald Westlake under the pen name Richard Stark. The Blu Ray is available below and is a double bill with The War.

Do follow me on twitter and join in on the polls. It’s sometimes fun and it really is the least you can do.