In this article we take a quick glimpse at possible Men’s Henley Alternatives based on the one we see Jason Statham wear in Death Race.

The remake of Death Race stars Jason Statham as a steelworker who is framed for the murder of his wife and imprisoned in on Terminal Island. A prison that plays host to Death Race, a sport where inmates race in armoured cars to the, well.. to the death obviously.

It’s a perfectly serviceable film for some parts, although for most it never really becomes the sum of them. There are some hokum plot contrivances. For example why does Statham’s character Frankenstein (race name) need a navigational driver around a circular grid? She (Natalie Martinez) is supposed eye-candy for the show’s audience, but he is driving behind mirrored glass? I did like Roger Ebert’s write up as,

‘an attack on all the senses, including common’.

“Yes my workwear is somehow aspirational – don’t ask me how.”

With regards to the costume design it’s mainly prison garb. But in the opening sequence we see Statham’s character Jensen Ames leave the factory in a distressed men’s henley. It’s a dark green/ muddy pond-coloured henley with distressed stitching. There is an open breast pocket and a reinforced button placket. He wears this with a greasy white vest.

The Costume Designer Gregory Mah has little to no presence online so I haven’t been able to reach out to him for a quote. I felt a bit insecure reaching out to anyone else in the costume team and asking about a henley. There is no costume buyer listed on IMDB for this movie so we can assume that most of everything you see on film was specifically made.

But I am something of a completist and so with the one semi-wearable henley I wanted to find some alternatives for myself and anyone else interested. 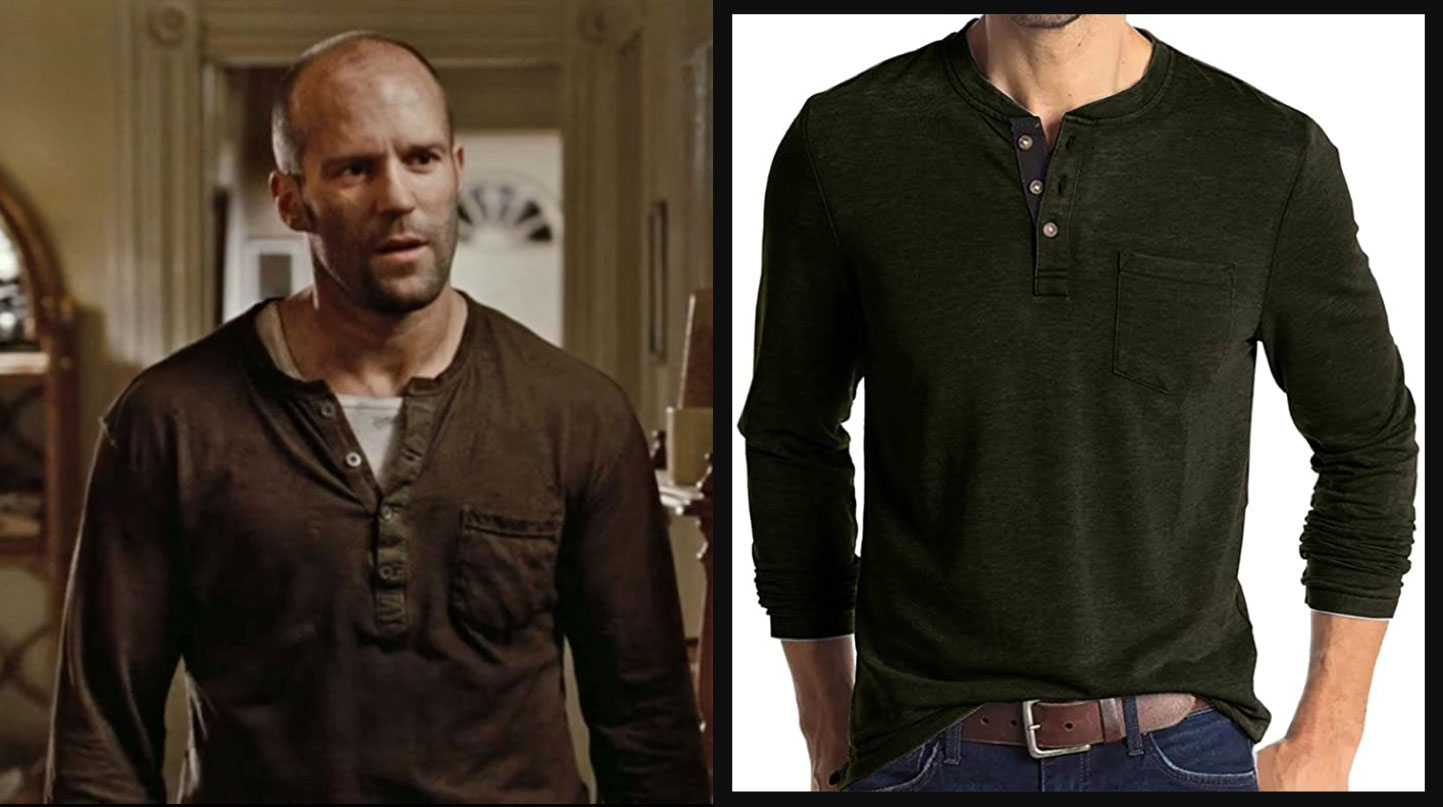 The Men’s Henley above is available on Amazon, currently £19.66. It has been reviewed well and is very close in colour, cut and comes with the open breast pocket. The pocket is even welted the same. The only visible difference is that the original has 4 buttons on the placket and the alternative has 3. 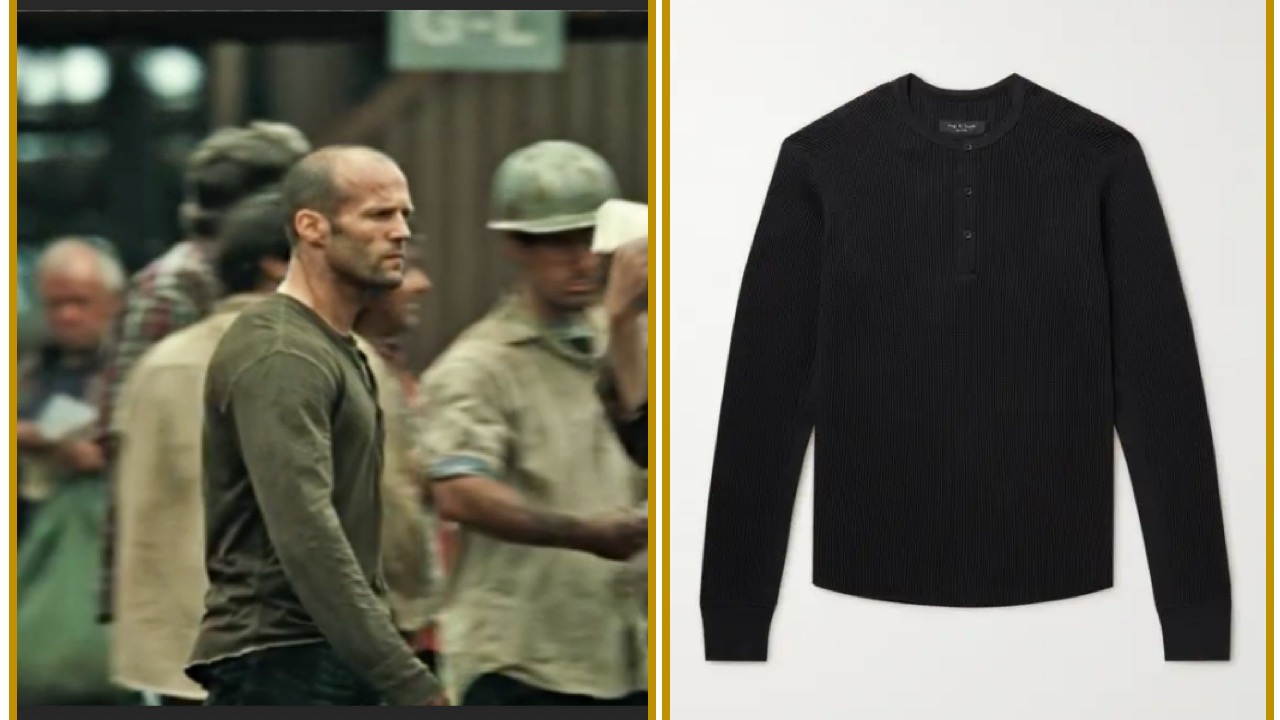 This Men’s Henley by Rag N Bone is available through on Mr Porter for £165. It’s a more luxurious alternative and doesn’t have many of the original details. But it’s a textured Henley so will capture the essence of the original but will promote the overall effect from workwear to smart casual. 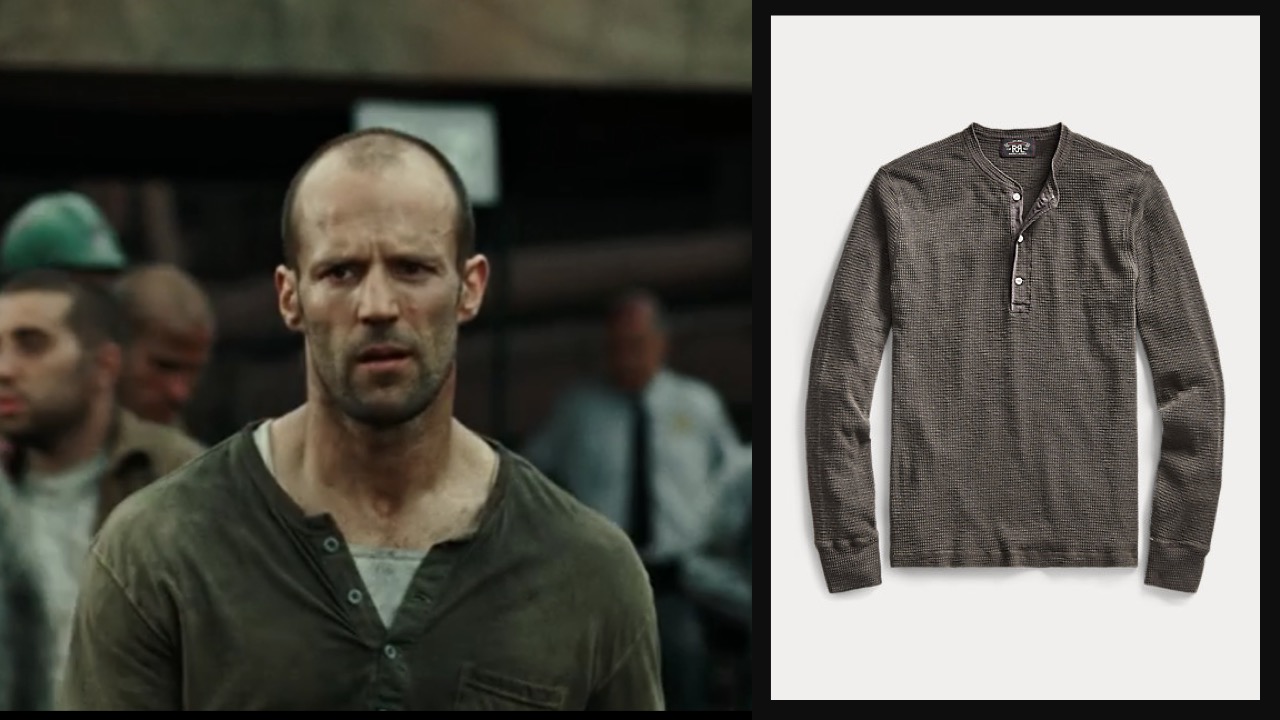 The last Men’s Henley is a Waffle Knit by Ralph Lauren selling for $145. If you’re going to upscale the look this is probable my favourite and was listed in an Esquire article for best men’s henley’s. It has some slight worn in look to it which reflects a more casual approach.

As I mentioned the only visible props I managed to find online was the car sold on Your Props. Figurines and toys have been sold on Ali Express. If you have any further intel on the brands, costumes please do contact me and I’ll update the article. Find more Jason Statham style templates in previous articles.

You can buy the Death Race Box Set (3 movies not including the original Death Race 2000) on Blu Ray.