Homefront – The Hunt for the Black & White Mesh Truckers Cap

I have spent an indignant amount of time looking for a black and white baseball cap online that Jason Statham wears in the movie Homefront. In the words of Jerry Maguire it’s been an ‘up at dawn, pride swallowing siege.’

My first port of call when writing about a film is to contact the costume team. The costume designer for Homefront was Kelli Jones. (So far nothing back, but will keep you posted). Second is typing key words into Amazon when looking for a product that looks generic. The Distressed black Baseball Cap with white mesh is worn throughout the movie. I’ve found one similar on Amazon currently for 6,99 GBP. 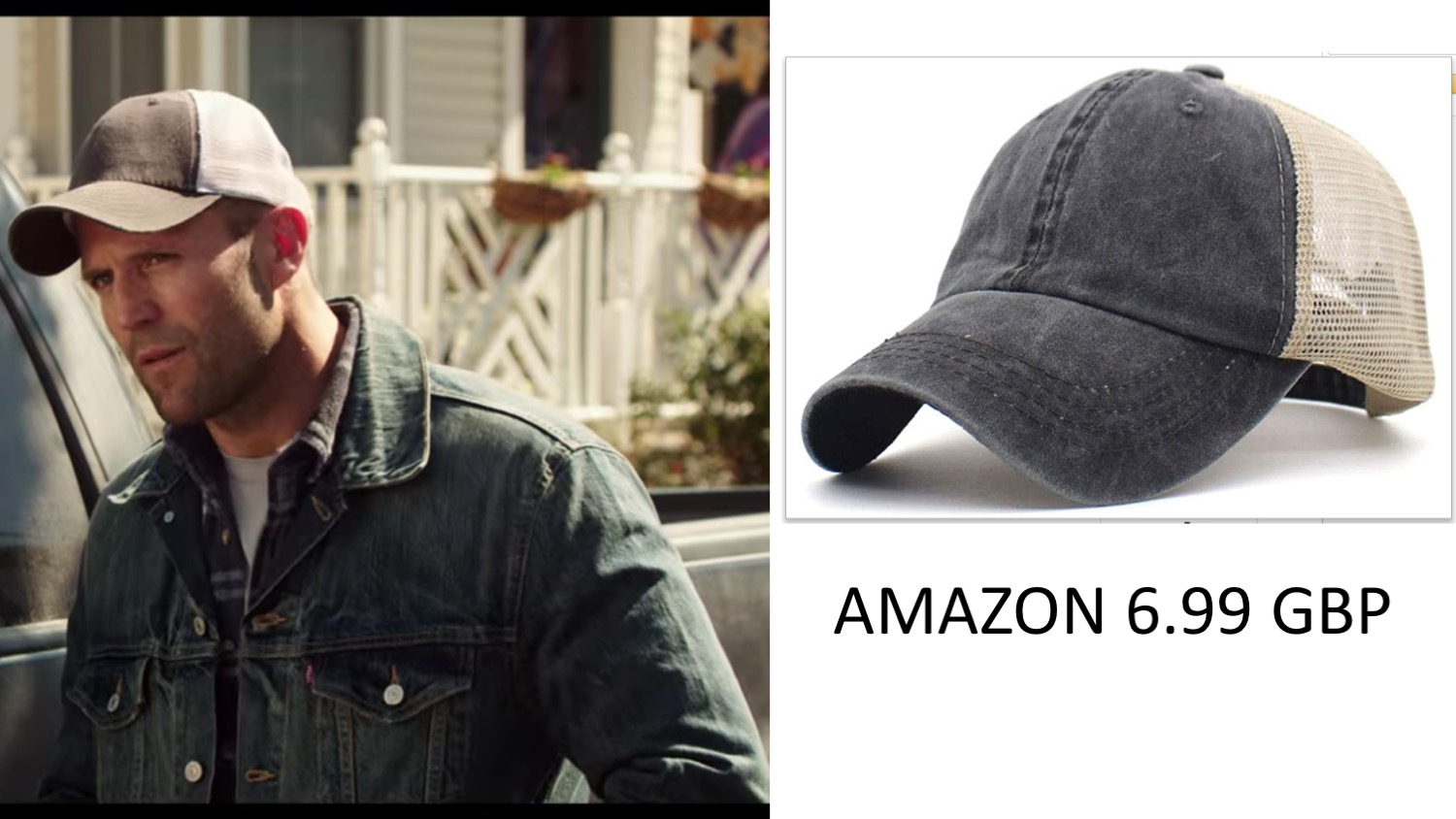 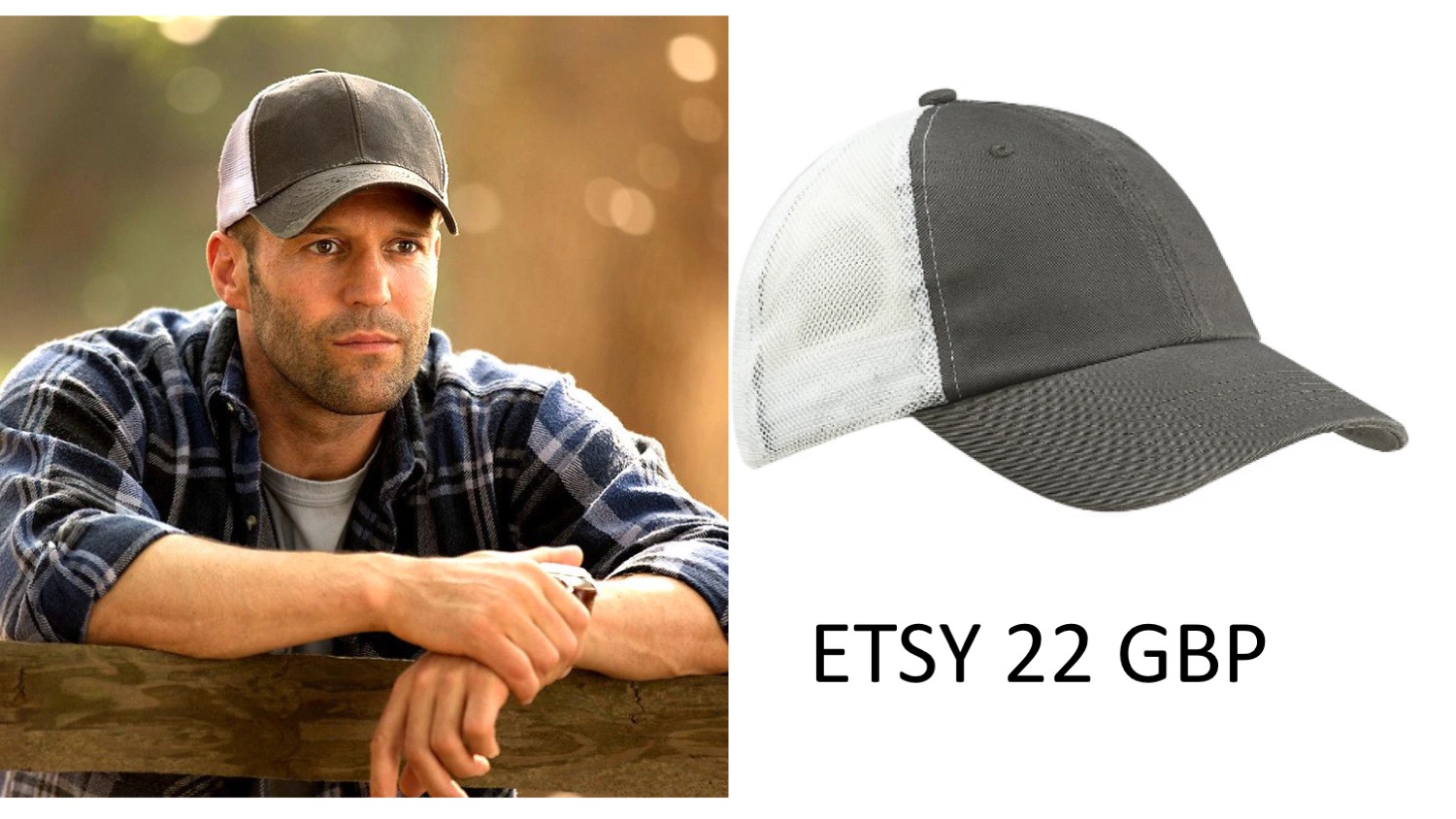 Whilst I had no luck finding the cap, the Levi’s vintage denim jacket was easily identifiable and still available to purchase through their website for 98 bucks and slightly cheaper on Amazon. I think the one on Amazon is slightly more accurate with the silver metallic buttons as opposed to the brass. The red Levi’s logo tag is visible on the jacket throughout.

They also do check shirts but the ones in the film don’t have the mini red logo tab. Although it would make sense for those to be removed for the film so Jason doesn’t look like a walking Levi’s advert. 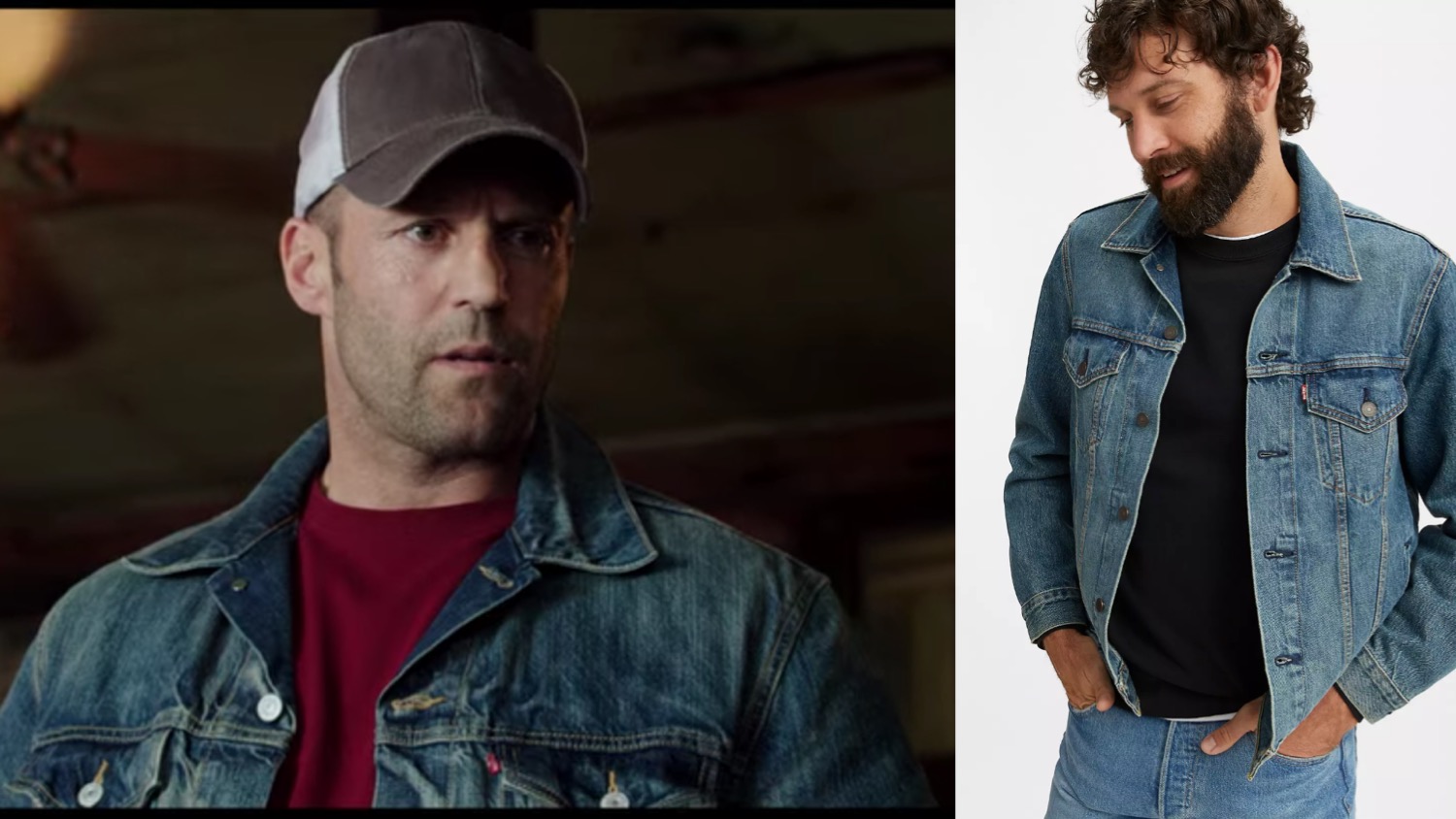 The boots look to be an oxblood iron ranger boot which you can normally find on Redwing when they have them in stock. Eastland also do something similar with a Lumber Up Chukka Boot for slightly less as do Dr Marten’s. However, we’ve either of these alternatives they will need some distressing to pull off that worn-in blue collar look. Jason often likes to have a good heel to his boots and shoes to compensate for not being overly tall. 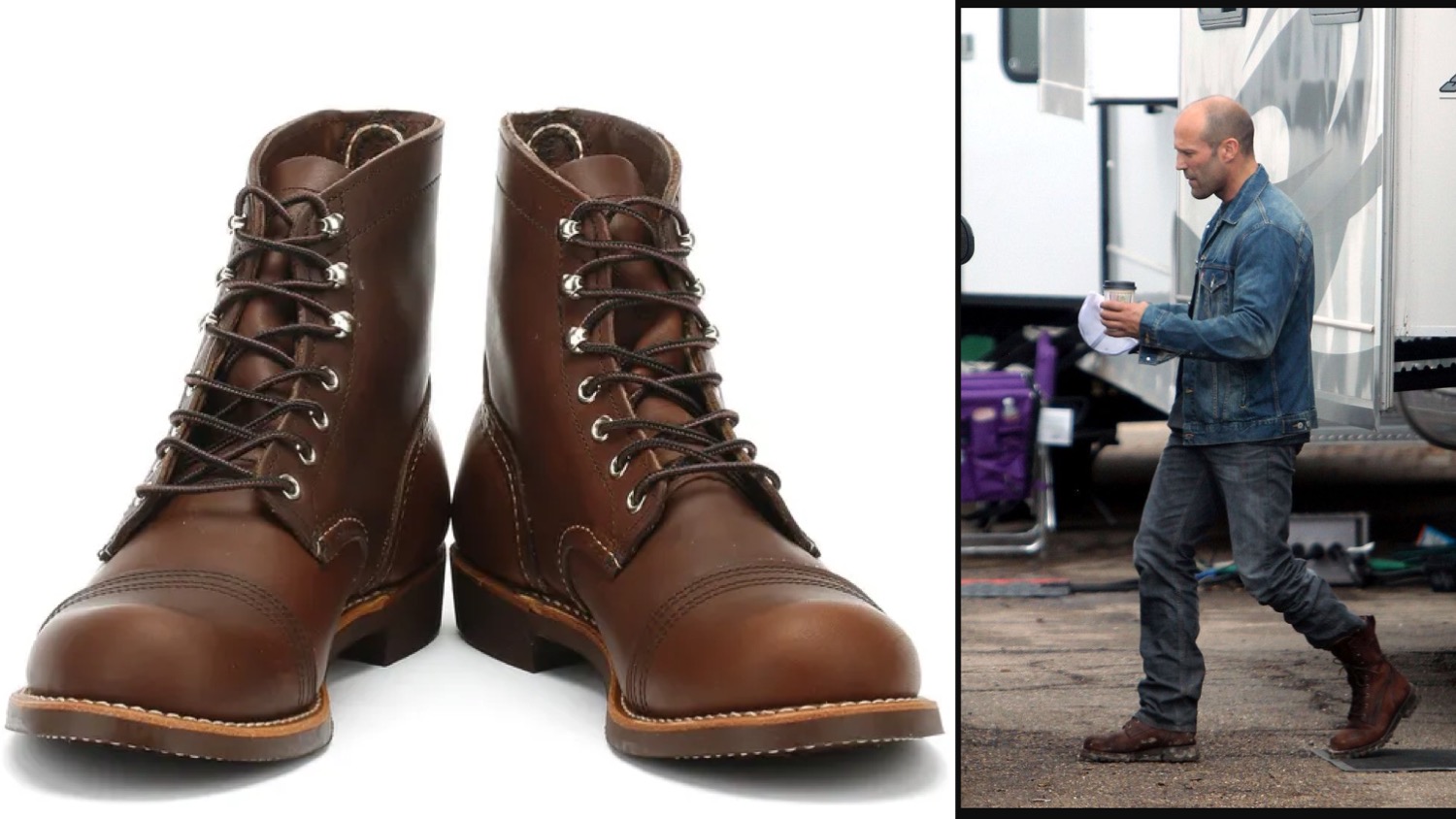 Jason wears two different blue check shirts during the film. One has a little bit of green in it with a straight check pattern throughout. The other is simple blue, white and black but with a diagonal pattern on the breast pockets. The check blue shirt you can find anywhere. Jack Jones do a check twill shirt 35 GBP.

It would also make sense to imbibe the real Americana look of Wrangler. I’ve found a blue flannel check shirt for 34.84 GBP. It’s sherpa lined , without the white press studs of the original but boasts the criss-cross pattern on the breast pockets. However, these shirts look to be simple flannel unconstructed shirts with no funky lining.

The red checkered shirt also looks great on Statham. Alpine Stars do them although they are not known for them. His character does not dress flashy for any scene, for anyone. Even his shirt that he wears to his daughters birthday party is also a red check shirt in this vain. He is looking to blend in to the community and forget his past. He does not need any of his clothes to draw extra attention to him. 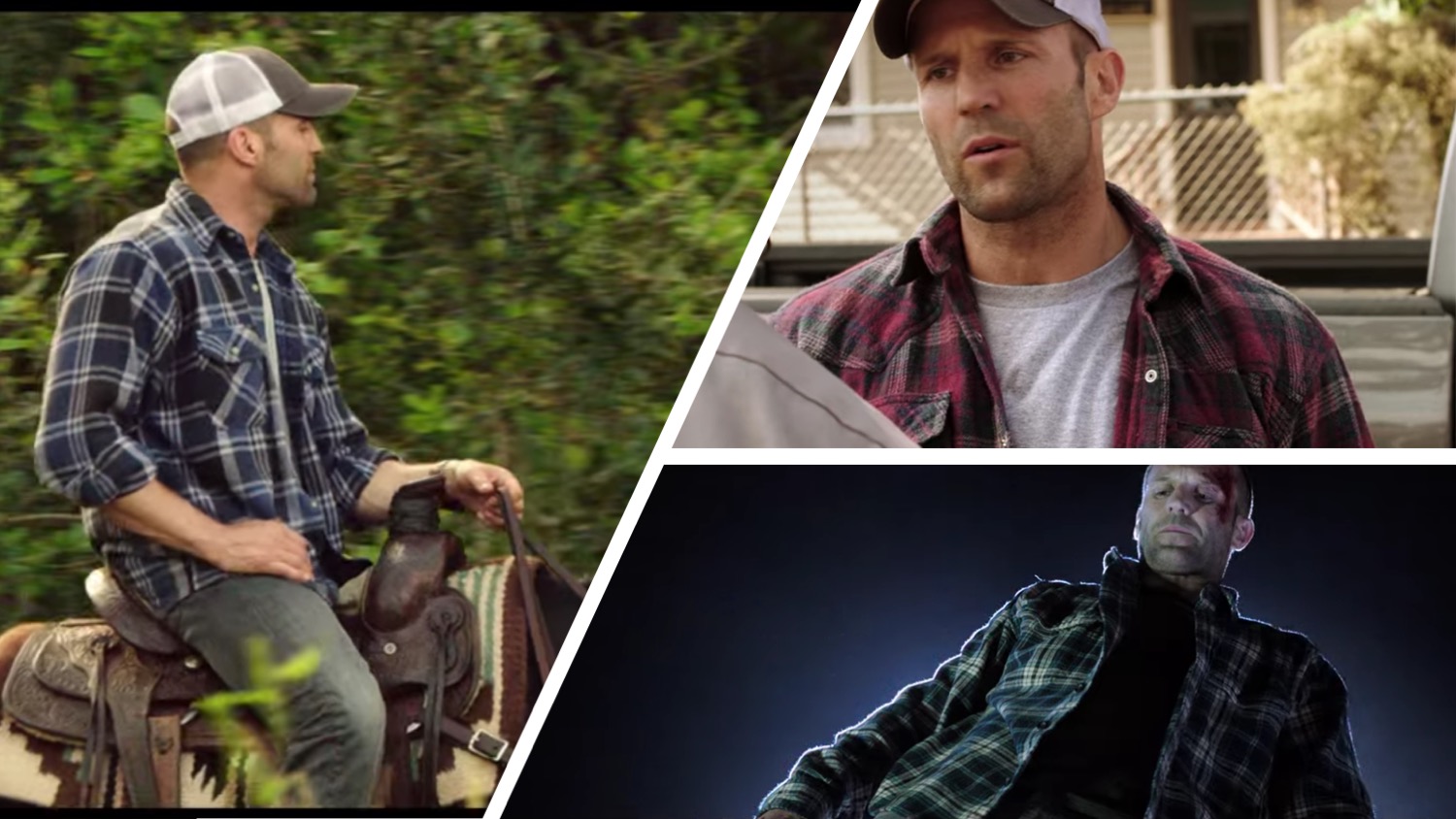 If I were looking to emulate any of the look I would first search some pre-loved sites or local thrift stores for the shirts as they are readily available through more or less any brand. Homefront is available to buy on Blu Ray. It is also based on a book of the same name by Chuck Logan and the screenplay was adapted for film by Sylvester Stallone.