I’m starting a mini project. Whilst working on some style and fitness goals for 2022 where better to look than Jason Statham? I’ve become somewhat besotted with the man over these past weeks, for no other reason than his style never takes a misstep.

Statham found his way into acting through his modelling career for French Connection. As I pulled from his IMDB page;

His break into the entertainment business came when an agent put him on an advertisement for the French Connection clothing company. 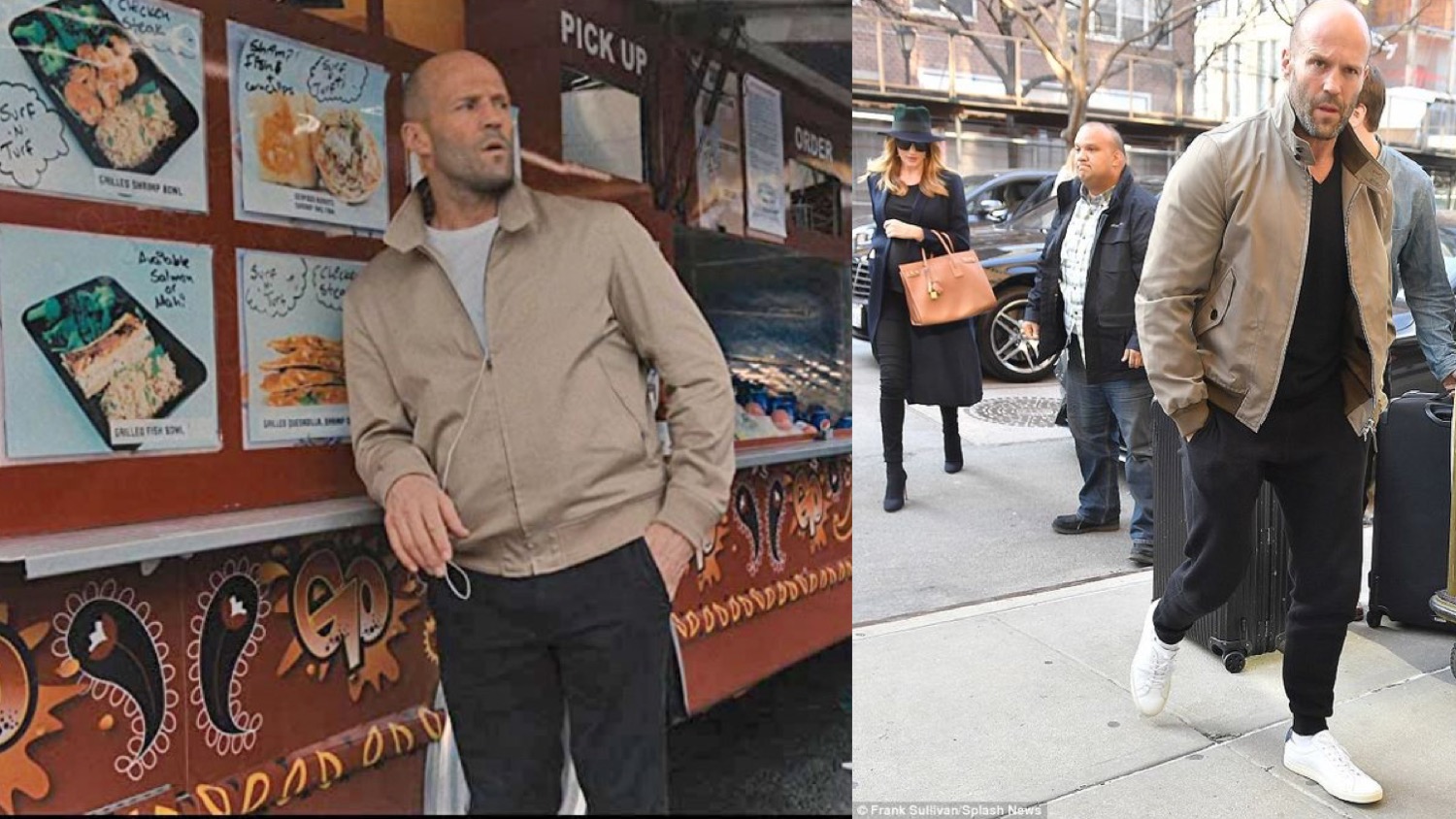 Now about that Harrington

Maybe I’ll start with the coat that inspired me to write this. The Tan Harrington from Wrath of Man (2021) Directed by Guy Ritchie. After looking at a thread from the detectives trying to identify the brand on AJB, I started to reach out to the costume team. The costume designer was Stephanie Collie, we’ve covered some of her work previously on our Layer Cake feature.

I have never been able to establish contact with Stephanie, though according to Chloe Reynolds who was Jason Statham’s personal dresser on Wrath of Man, she seems to remember the Harrington Jacket was especially made,

There were a lot of options to get it right – I think in the end it was made by the tailors in house.

The thing that makes this Harrington Jacket slightly unique are the slash pockets on the hip rather than the flap pockets so common on the Baracuta. It’s also unstructured which makes it very wearable in the LA heat. You can see from the photo comparison above Jason approves of this style for his personal life also. 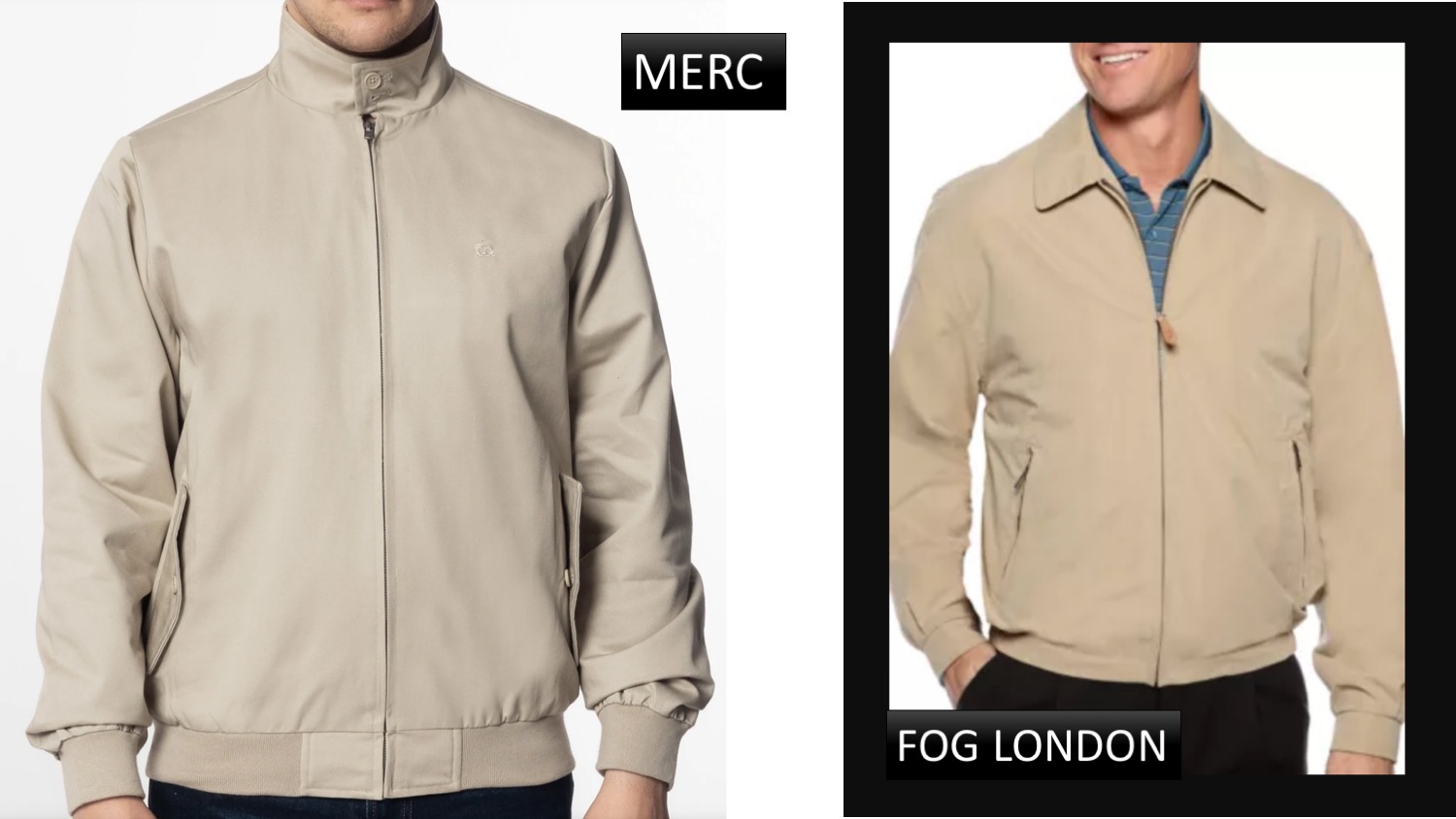 Speaking of which here are some alternatives I’ve found: 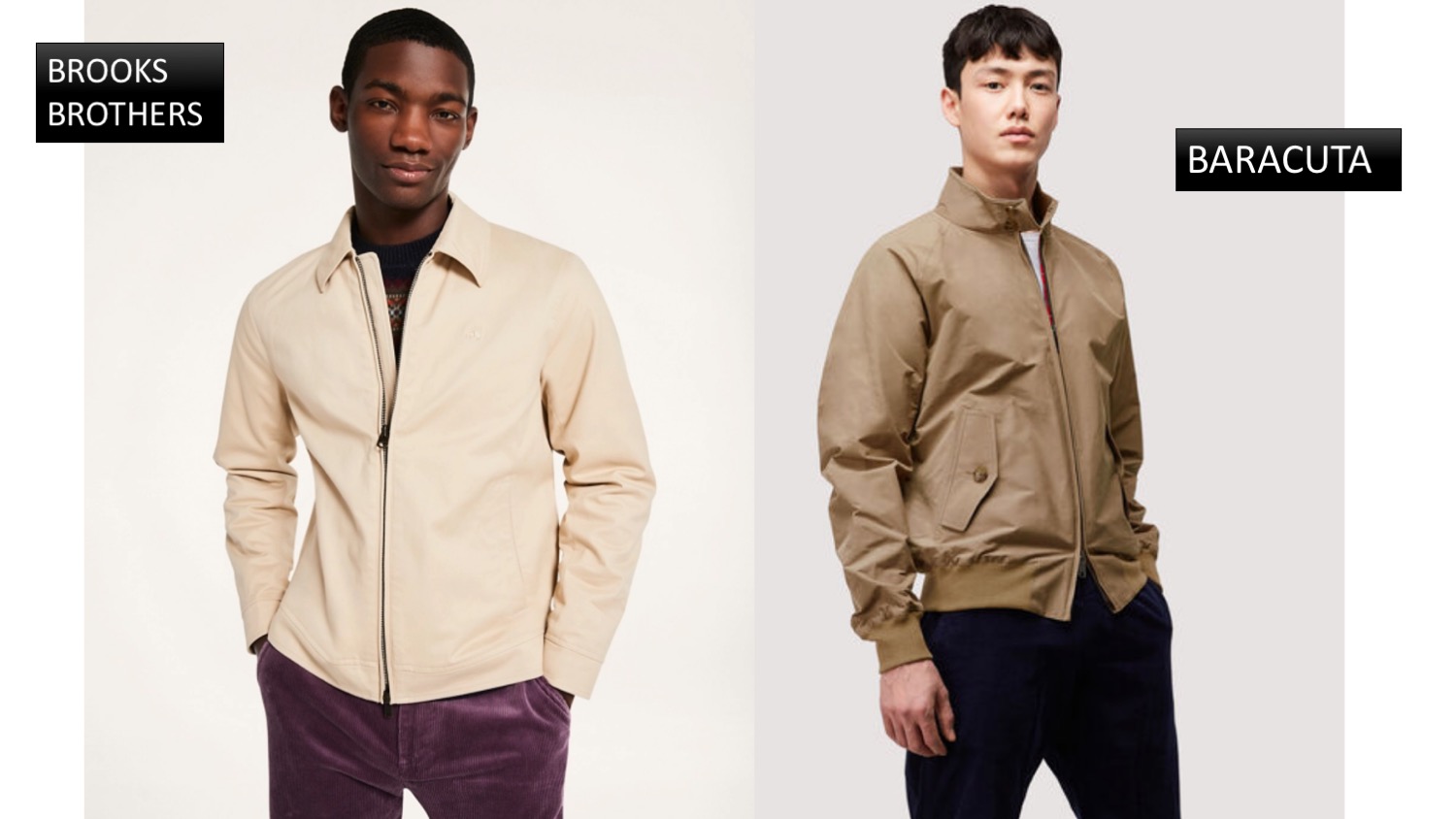 For the knits, Statham wears 2 shawl ribbed cardigans. One in grey and one in navy. They look to be different brands, or at least different models. The grey is a 7 button ribbed throughout which Statham wears with the top button undone. The navy is a 6 button with only the chest ribbed. The sleeves are a clean knit. 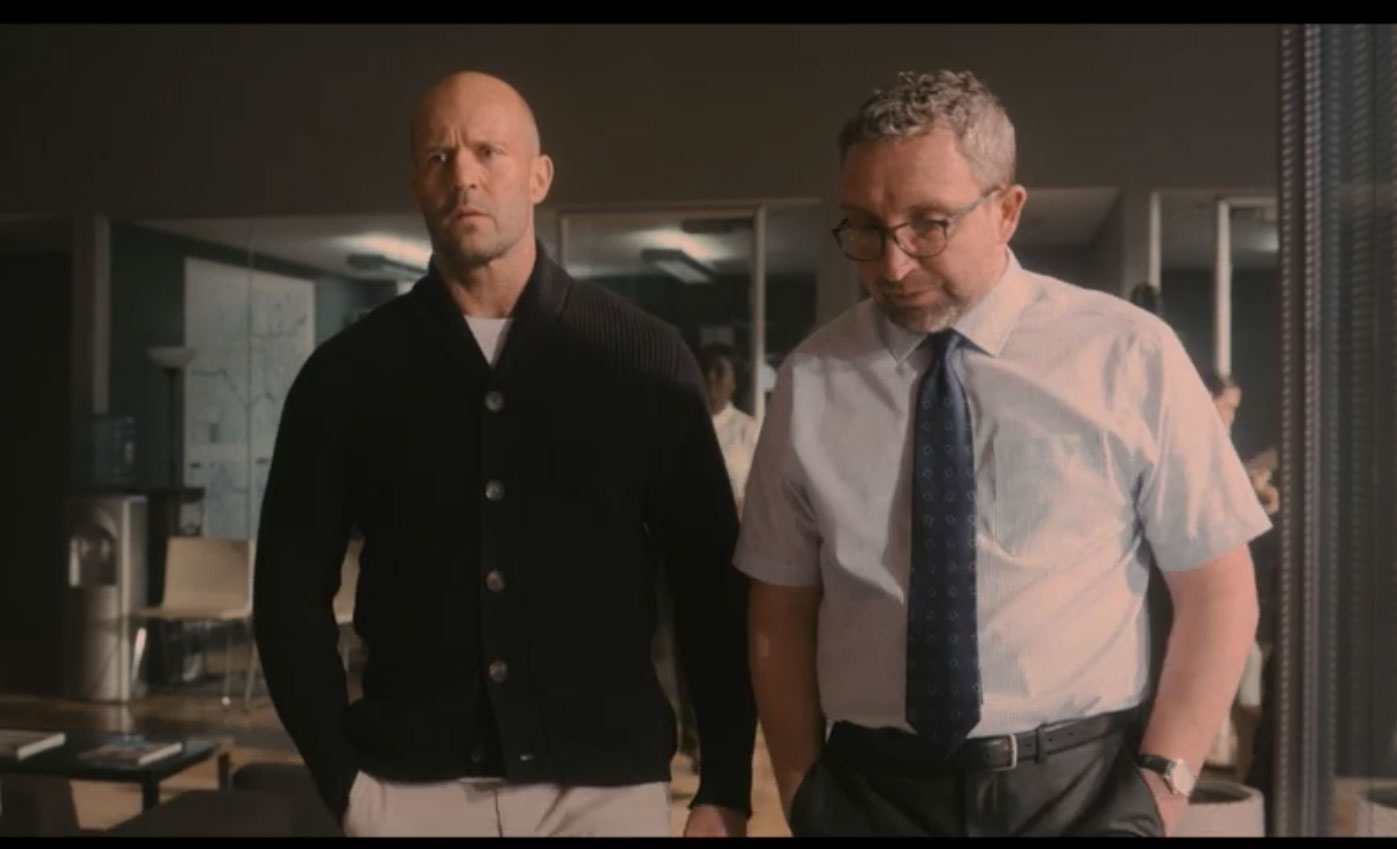 There are many shawl knit cardigans on Amazon, but none I can recommend. (Remember I only leave links to products I would consider buying myself or I believe a decent alternative from a reputable brand if the original garment is not available to buy). However, I did find one on the Timothy Everest site currently on sale for 160 GBP. 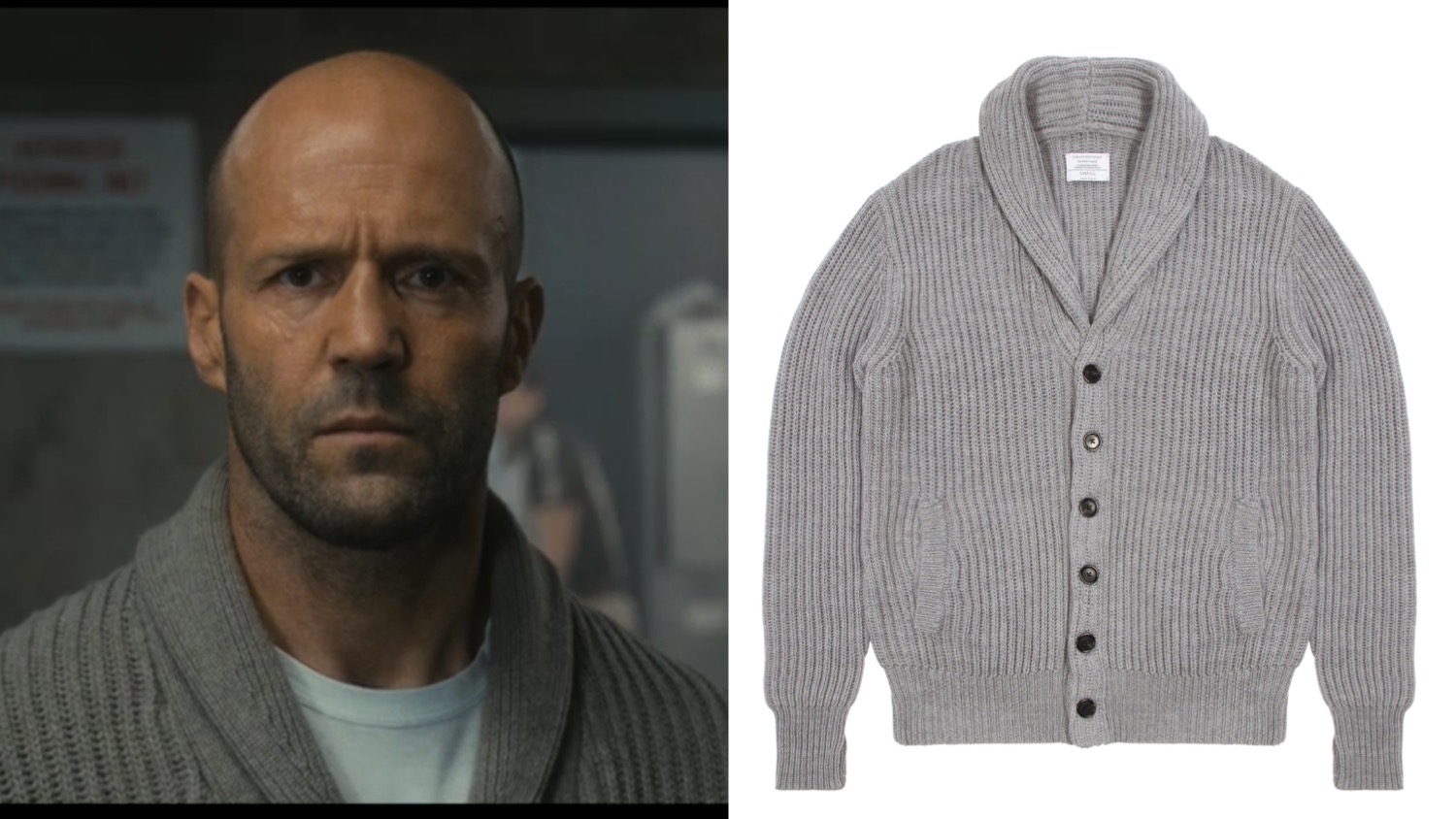 Also Statham interrogates fellow employees of Fortico wearing a navy zip through bomber. The O-ring zip can often be found on Barbour garments, though unsure if this is one of theirs. Both the skirt pockets and front placket are in contrast white which offers a retro feel and lights up the jacket beautifully in these dark scenes.

We first see it when he challenges Dana played by Niamh Algar and in the last scene where H is waiting for Eastwood in his apartment. 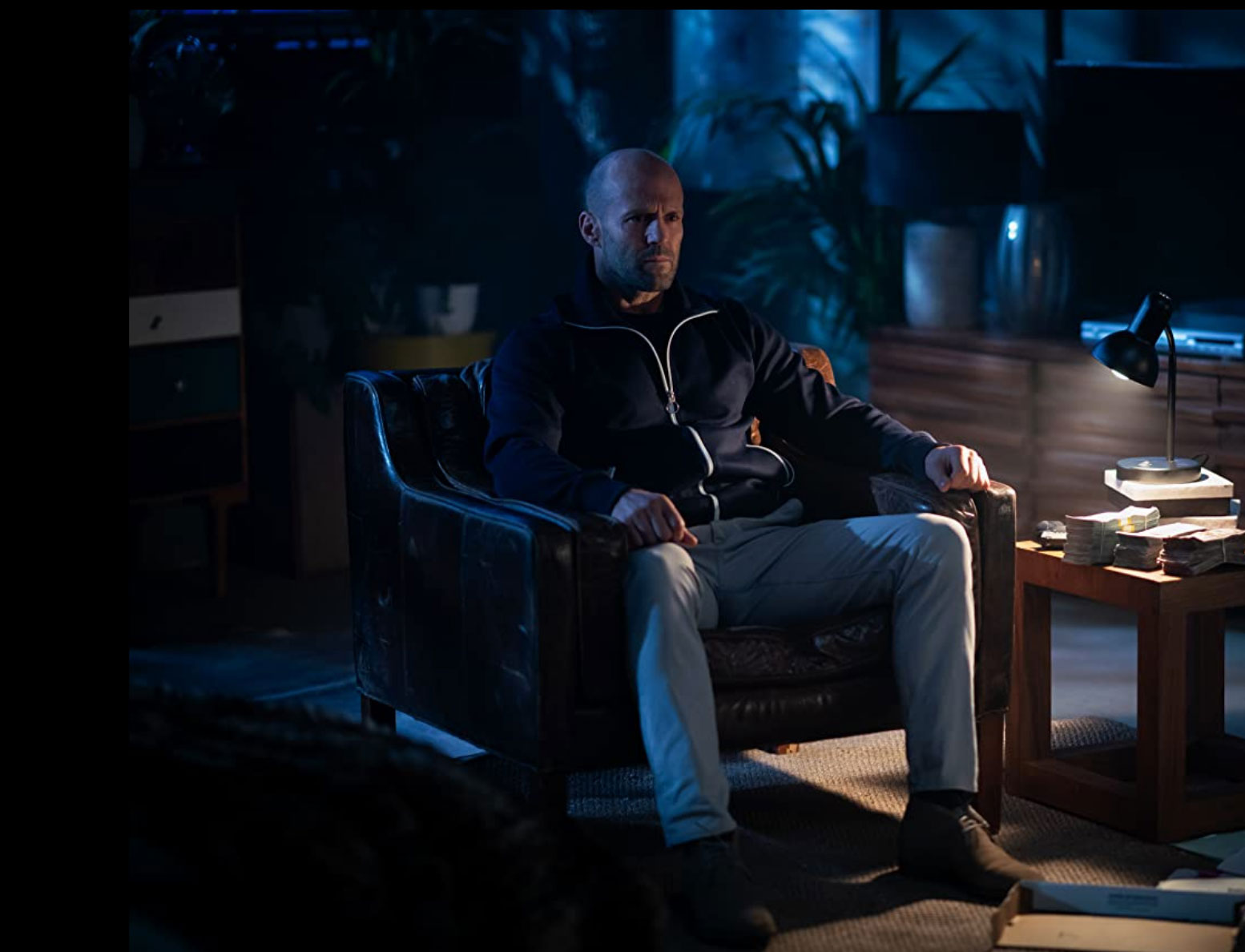 The end credits thank SheepInc. I’ve reached out to ask to the team at SheepInc and asked what they provided. They were very receptive and I’ve enjoyed the correspondence so far. Unfortunately whilst we can confirm that samples were sent, we can’t as yet marry the scenes with the garments.

Speaking to luxury brand consultant Alexandra Carello, she thinks she may have spotted the jumper,

I actually watched Wrath of Man on the plane back from holiday and I thought the jumper might be the Pacific Blue version that Jason is wearing in the early scenes, but I couldn’t be completely sure.

Wrath of Man is available to watch on Amazon Prime. It’s also available on Blu Ray under the title Cash Truck.