Making The Diamonds are Forever Half Norfolk Jacket

The Diamonds are Forever Half Norfolk Jacket

This jacket was a passion project. Ever since I first saw this movie at the age of 11, I knew this was the look for me – I needed this jacket.

Unfortunately, it took me 10 years to truly envision this dream, both technically and financially. It’s too extravagant, nobody sells this, or otherwise it would cost a fortune and several middle fingers. 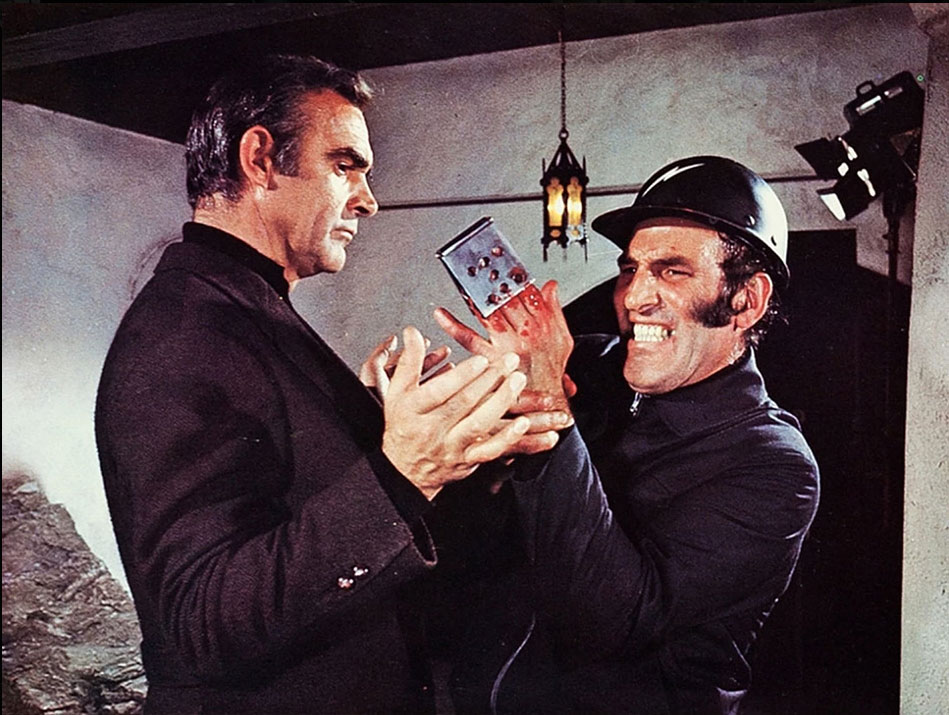 The man who can

Sajid from Niven Tailors was a game-changer. After sending an inquiry email he immediately responded he could do it, and he was ready to work out the details via Whatsapp until I was happy with them. He even networked me with Matt Spaiser of Bond Suits in New York, so I could discuss the jacket and choose fabrics with him in person.

(*Disclaimer: I still consider this the luckiest event of my life, it’s not every day this happens!) 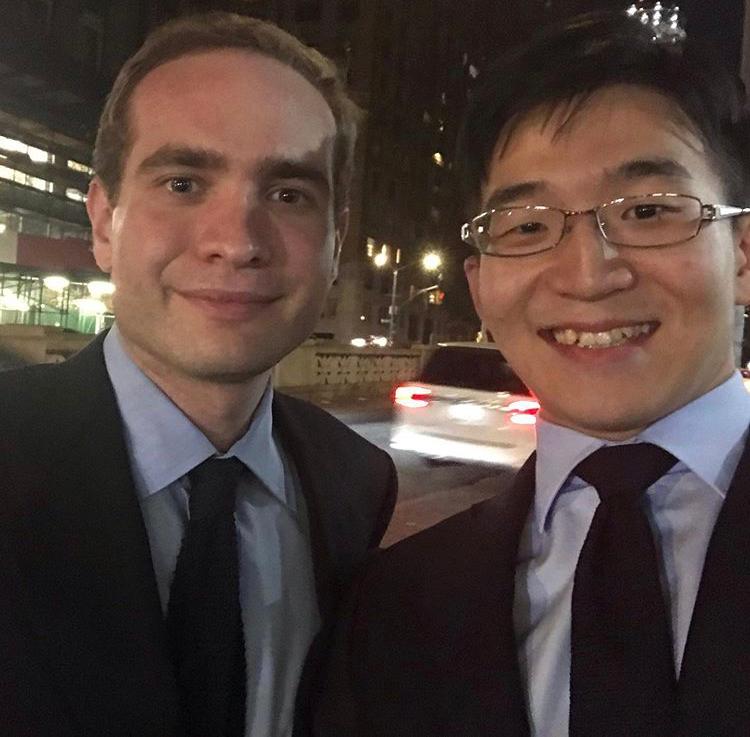 The Norfolk Jacket is a dark brown and black herringbone tweed jacket in a half Norfolk style (a sports jacket taking several design elements from the Norfolk jacket).

The details consist of wide dog-ear lapels, a full three-button closure with woven leather buttons, two buttons on the cuffs, bellows patch pockets, and a half belt on the back with extended double vents that begin from the belt line. 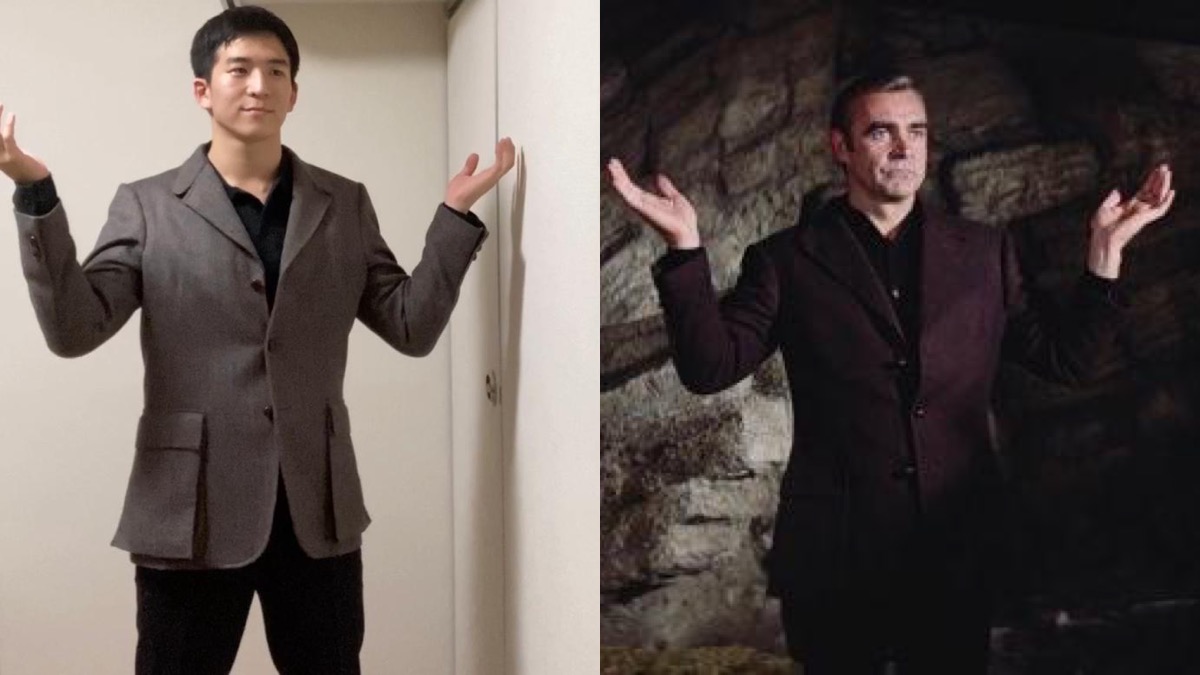 The original was a heavyweight fabric in black and dark brown, which appeared either a dark brown when exposed to light or black in less lit photos. It’s very Steve McQueen, and frankly speaking (pun not intended) could be one of the most identifiable tweeds in cinema history.

Here, we decided to play around a bit while sticking to a muted herringbone theme. After looking at some swatches with Matt, we settled on a 13oz tweed (from an unspecified Huddersfield mill) of what appeared to be a light reddish-brown and black in the dim lighting we were under. What surprised us was when we saw how different the fabric looked outside, appearing almost grey! 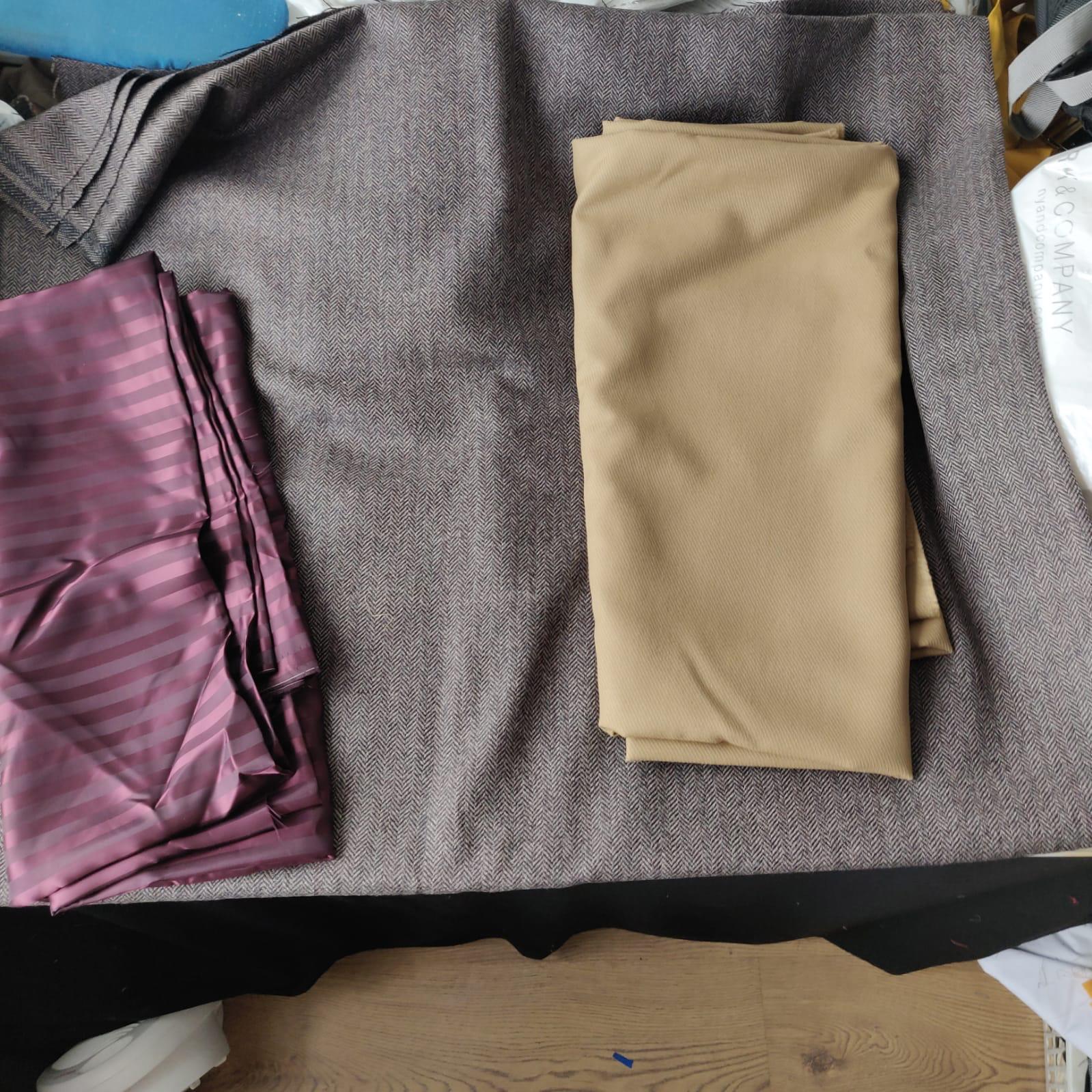 I think this shade of tweed is beautiful, and since it is a cold brown I have no trouble pulling it off with my Asian winter complexion. The lining is a wine red/bordeaux striped cupro, which lightly echoes the underlying hint of red in the herringbone.

Learn more about the style of James Bond, including the costumes of Diamonds Are Forever, in the book From Tailors With Love: An Evolution of Menswear Through the Bond Films, available on Amazon. 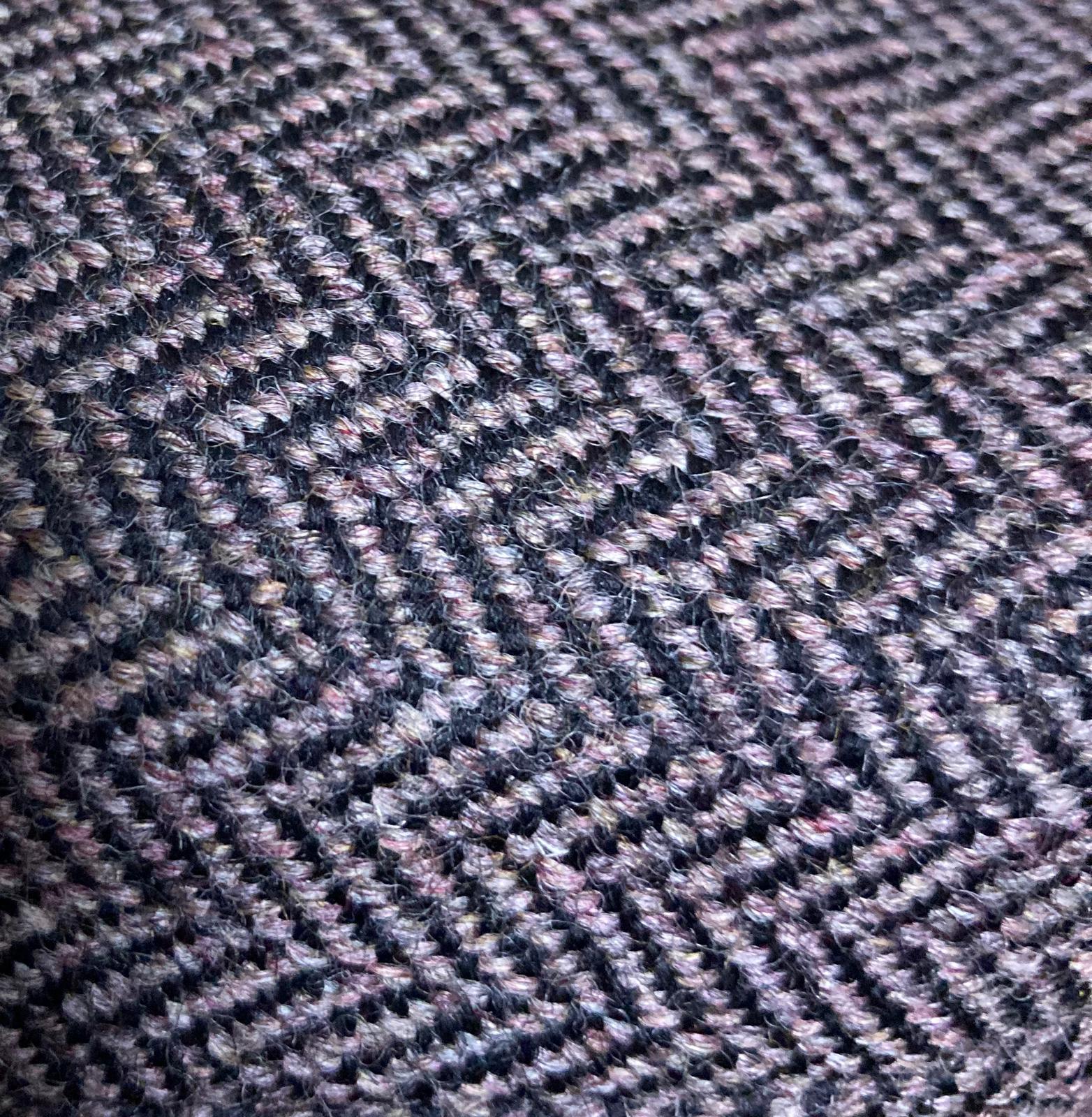 What truly defines this jacket is the “dog-ear” shaped collar. It’s like a storm tab but a bit more rounded, sans buttonhole, on both sides. Even to this day, we have absolutely no idea what the official name for this design is, if there even is one.

To make this absolutely perfect, Sajid used surplus tweed fabrics to make samples until the shape was spot on. Below are the steps we took until it reached perfection. 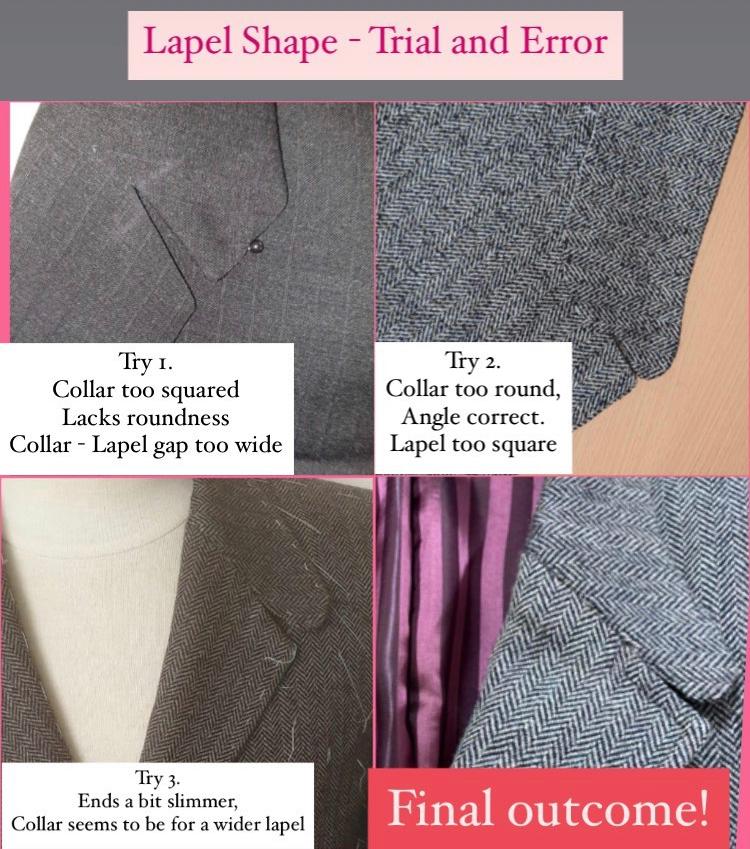 The shoulders are straight and padded just like Connery’s are, but are not built up or wide. They seem extravagant in today’s context, but “look right” with button three. It gives off an early Ralph Lauren vibe also, which I quietly dig. We adjusted the lapel width to 3 inches to match my build as well.

The unique shape misleads the fact that Connery’s lapels are quite wide, and particularly since this was a full button three jacket, widening the lapels would be much harder to pull off in comparison to a button-two.

This jacket is adorned with swelled edges of 5/16 inches from the edge. Connery’s could have been ⅜ inches given his build and 4 inch wide lapels. However, we took the sensible route here. 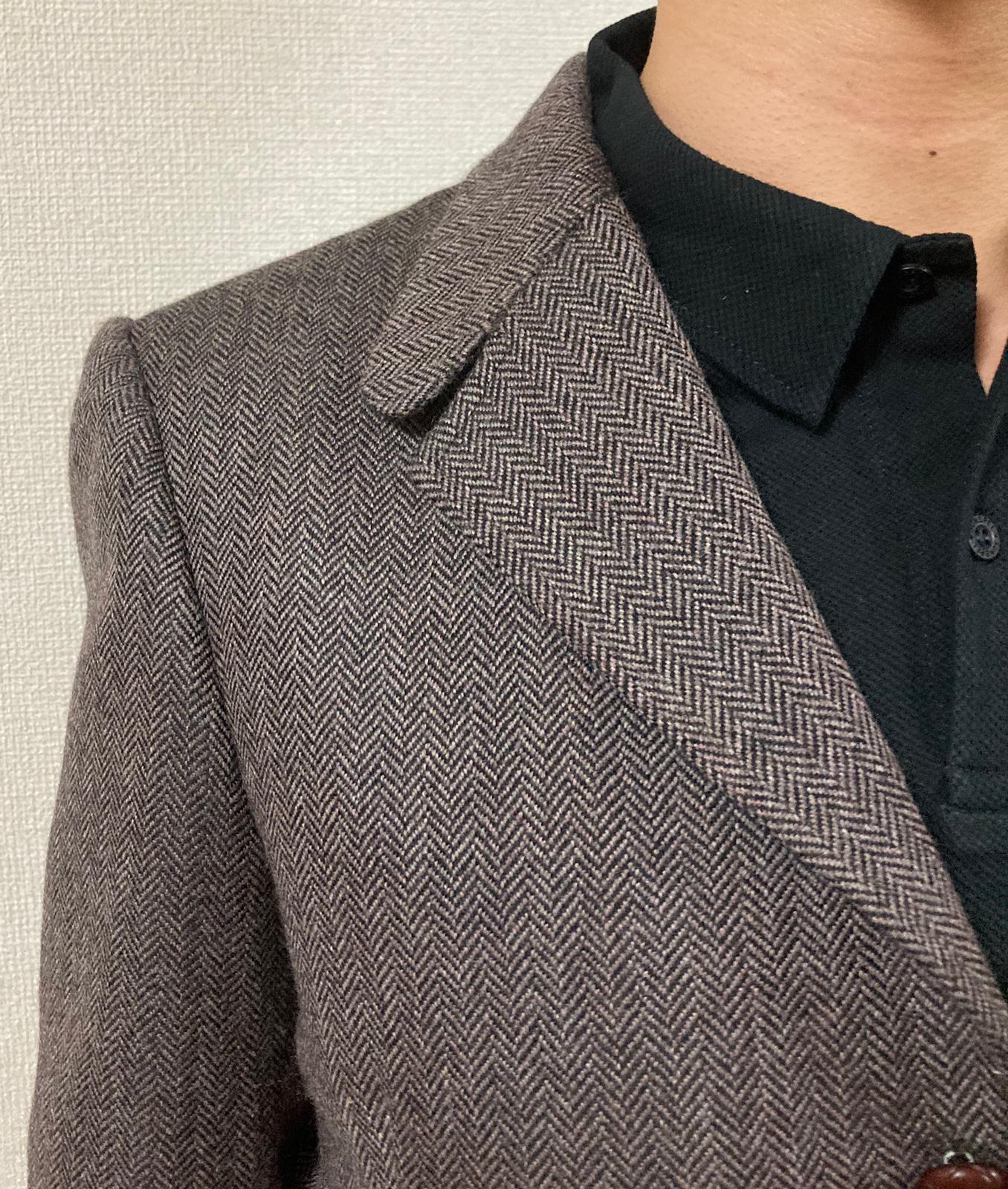 The jacket is a typical button-three. Matt had advocated the possibility of this jacket being a non-Sinclair product, 1. For the padded shoulders and 2. by the higher button stance unusual for Connery (certainly for his jackets in Diamonds are Forever, which are lowered comparatively).

With this in mind, we took a medium button stance so it falls approximately under an inch above the belly button. The jacket has a longer look than most of my modern jackets, with the length of the jacket at halfway of the thumb. 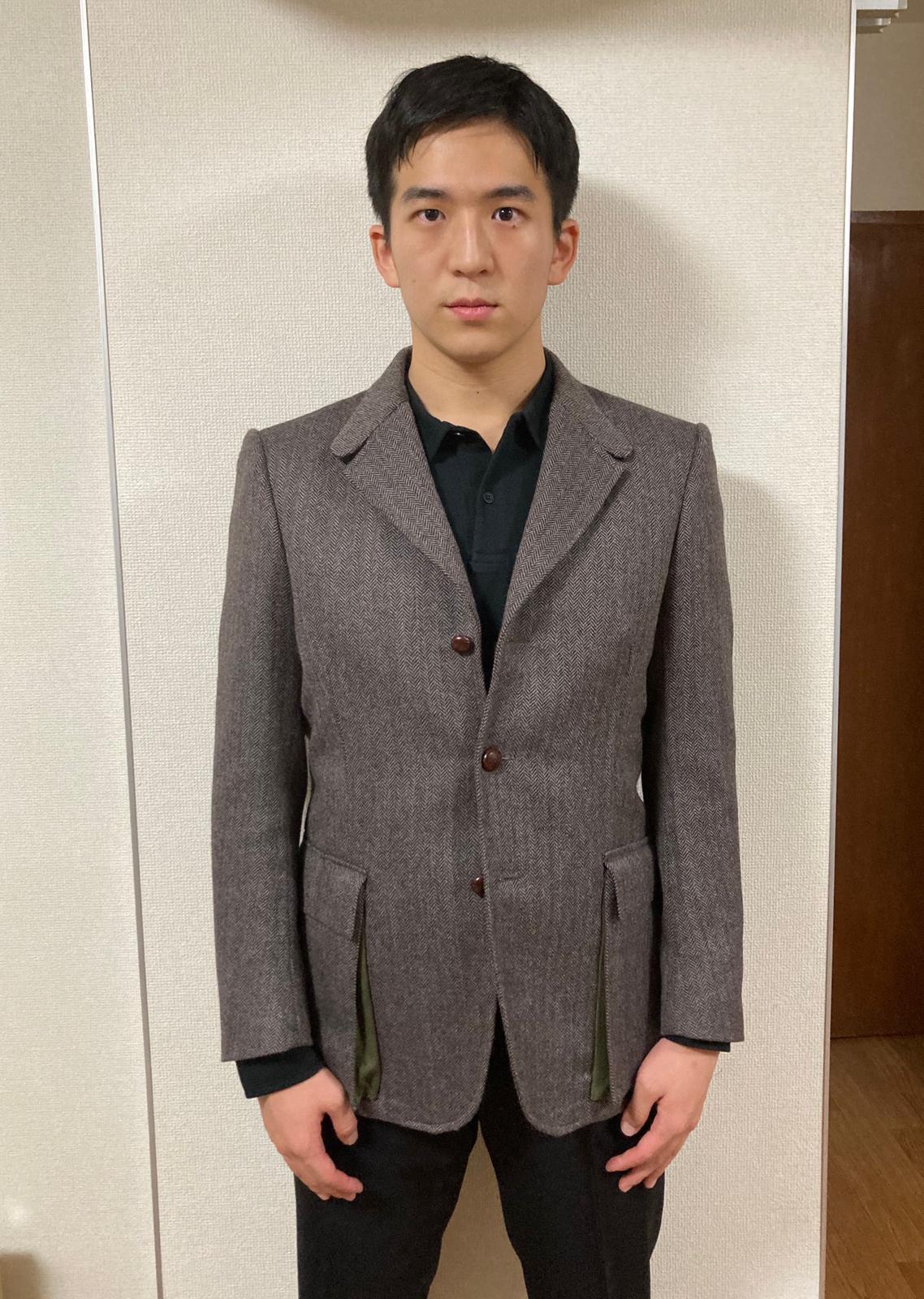 A noticeable point may be the absence of the breast pocket. As someone who seldom uses pocket squares, this doesn’t bother me too much. It helps in making the jacket look less cluttered.

There is considerable drape with a full-cut chest, which will help me conceal my mousetraps and wear chunky knitwear underneath in winter. 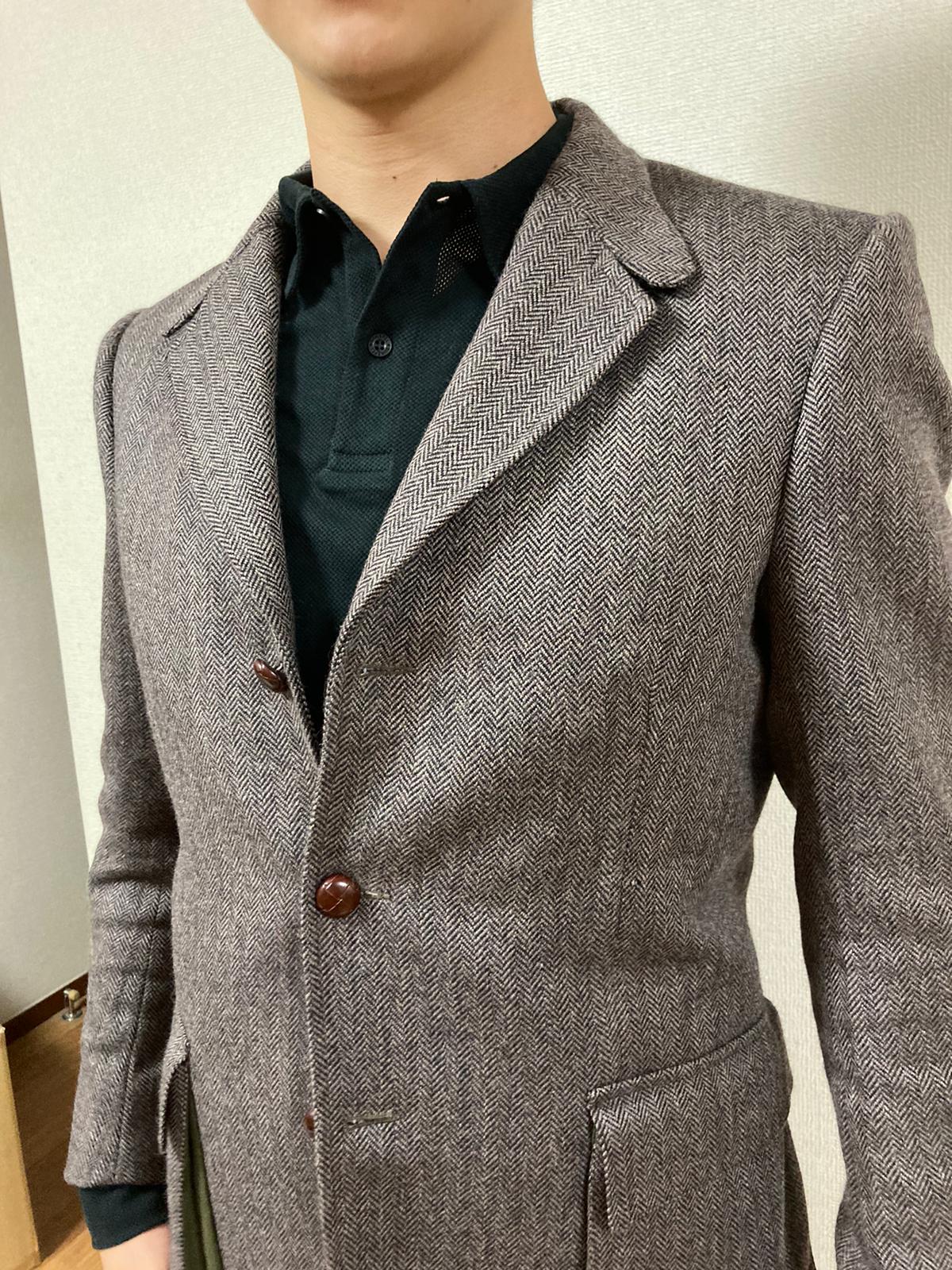 The old ways are the best

The cuff buttons were unique – a functional button-two cuff but placed further inward than average. We decided to copy this, but not to the extent – it would seem disproportionate had we copied the original.

Thus we pushed it outside one button’s space. The buttons are 19L woven leather buttons (15L for the cuffs) in a chocolate brown, that pick up the colours of the jacket. 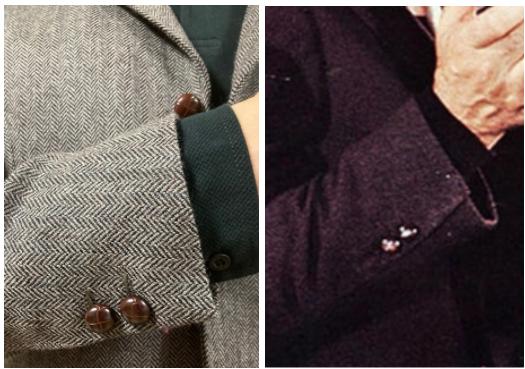 The pocket is called a “bellows patch pocket”. A flapped patch pocket that opens vertically with an expansion pleat on the sides like an accordion. Otherwise known as “accordion pockets.”

As someone who uses pockets on jackets, I’m loving the practicality. The flaps are 2 ¼” in width, echoing the narrowed lapel at 3”. Sajid added olive green moleskin on the bellow, which adds a nice touch of character. 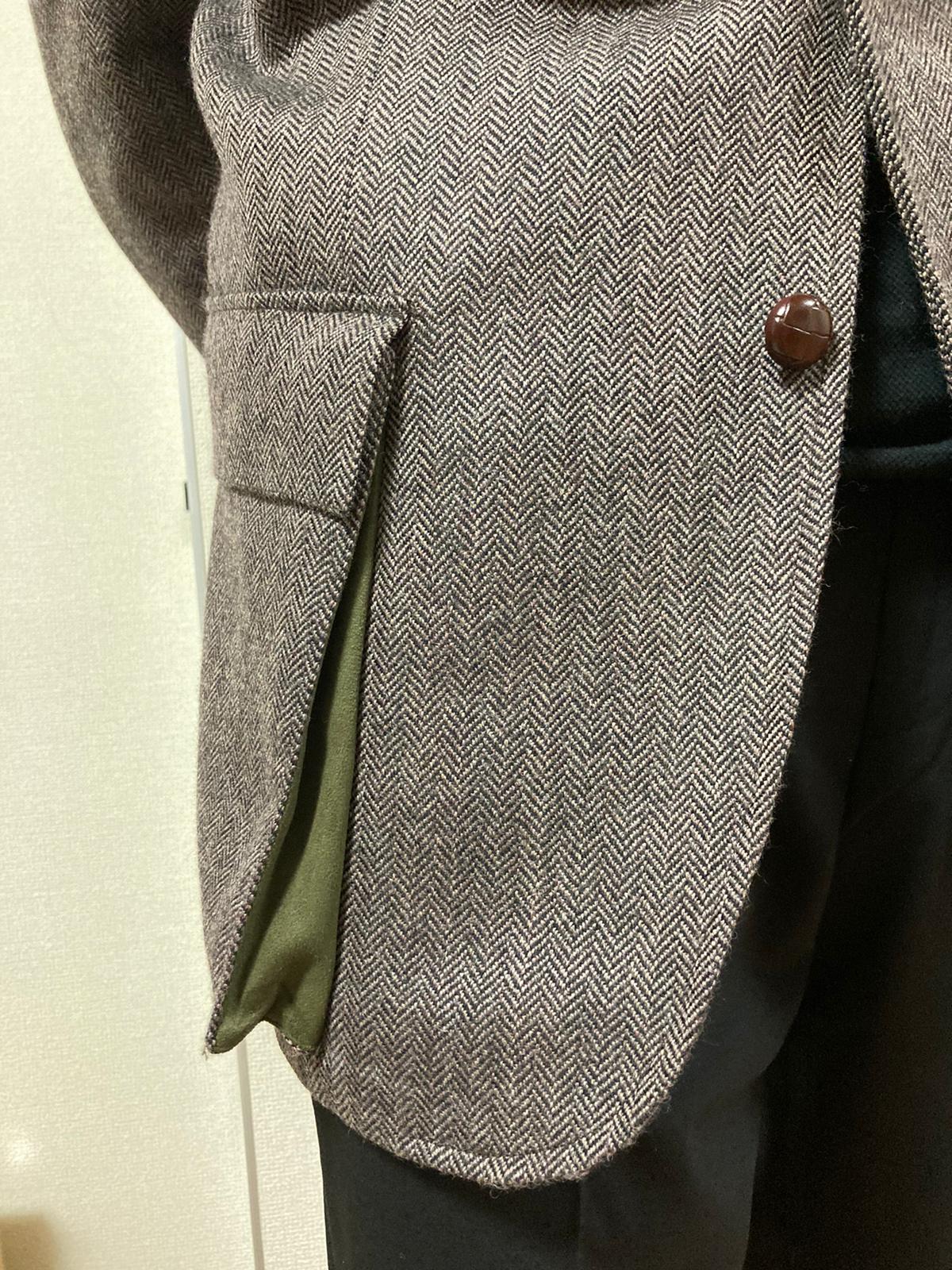 The half-belt is an extravagant detail on tailoring, but at home on a country garment like this. Knowing this jacket comes in two variations within the film (the other one in a bolder plaid) we were never too sure about how this belt was constructed. It seemed to be sewn on for the brown herringbone, while on the plaid it was clearly dangling.

We decided to sew this one on and keep it decorative. A belt would tighten the waist and possibly impede motion if it were dangling. I have scarce experience of belted coats.

I love how this belt clearly defines the waist position; placed high to accommodate the elongated double vents at 12”. The half-belt, longer vents, and bellows patch pockets really emphasise my rear and make it look larger. #hailhugeass 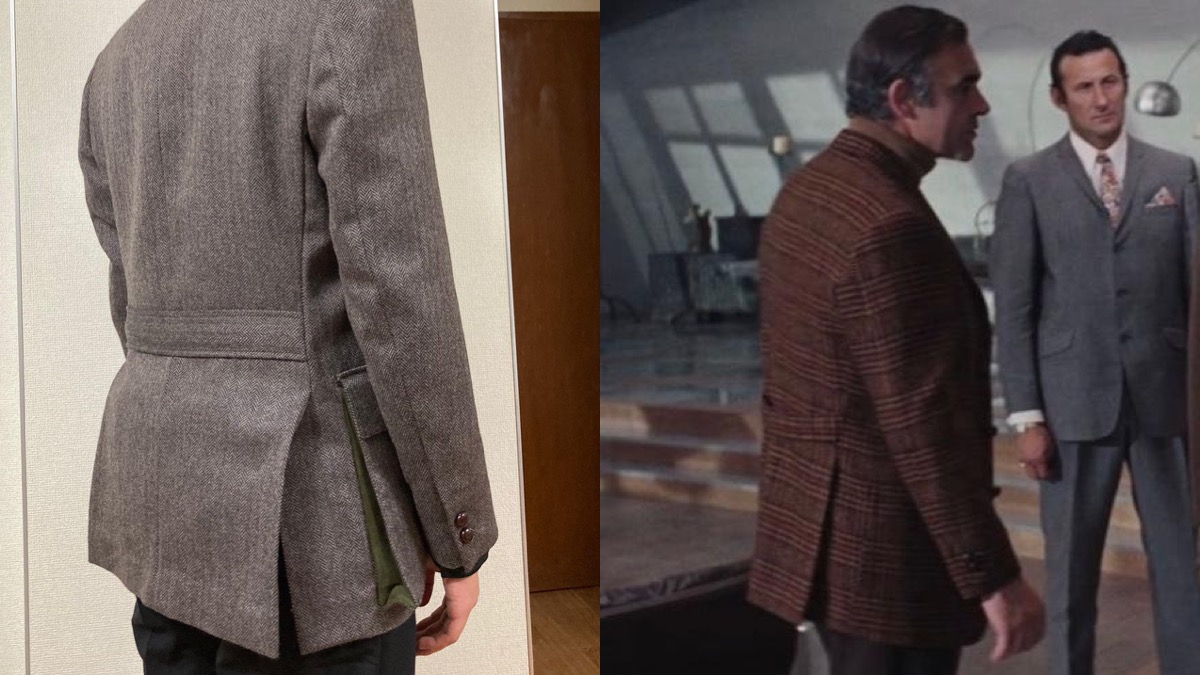 After our billionth rewind of the scene, we noticed a slight flare on Connery’s collar, right above the ear shape. Sajid and I speculated the possibility of a button underneath as a remnant of the storm fastening. Matt agreed on the possibility, though now we needed to justify the absence of the buttonhole. 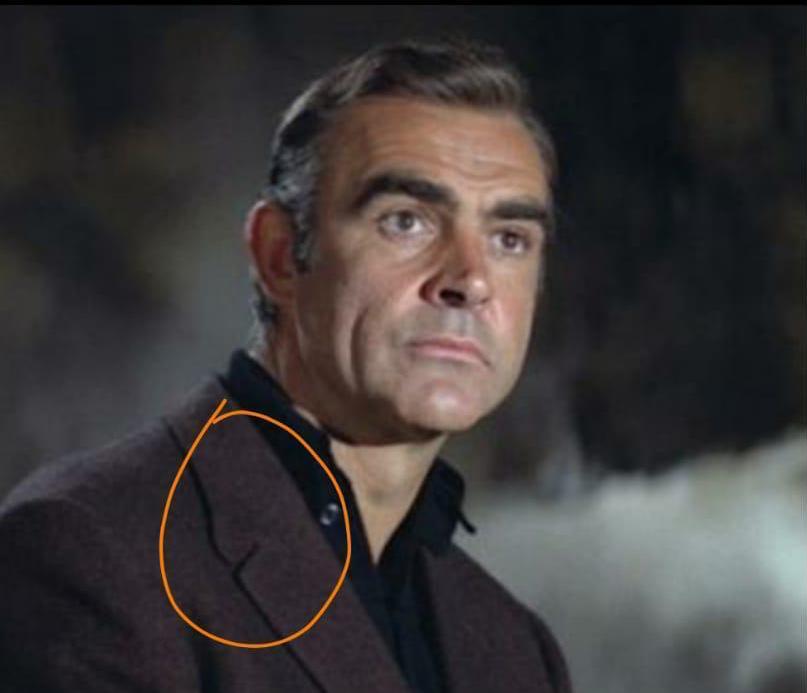 Then sprung an idea to mind after watching The Bond Experience’s review video on Daniel Craig’s Dior jacket in Spectre; A decorative button beneath the lapel, that transforms into a storm collar with a detachable piece of matching tweed. This was it! 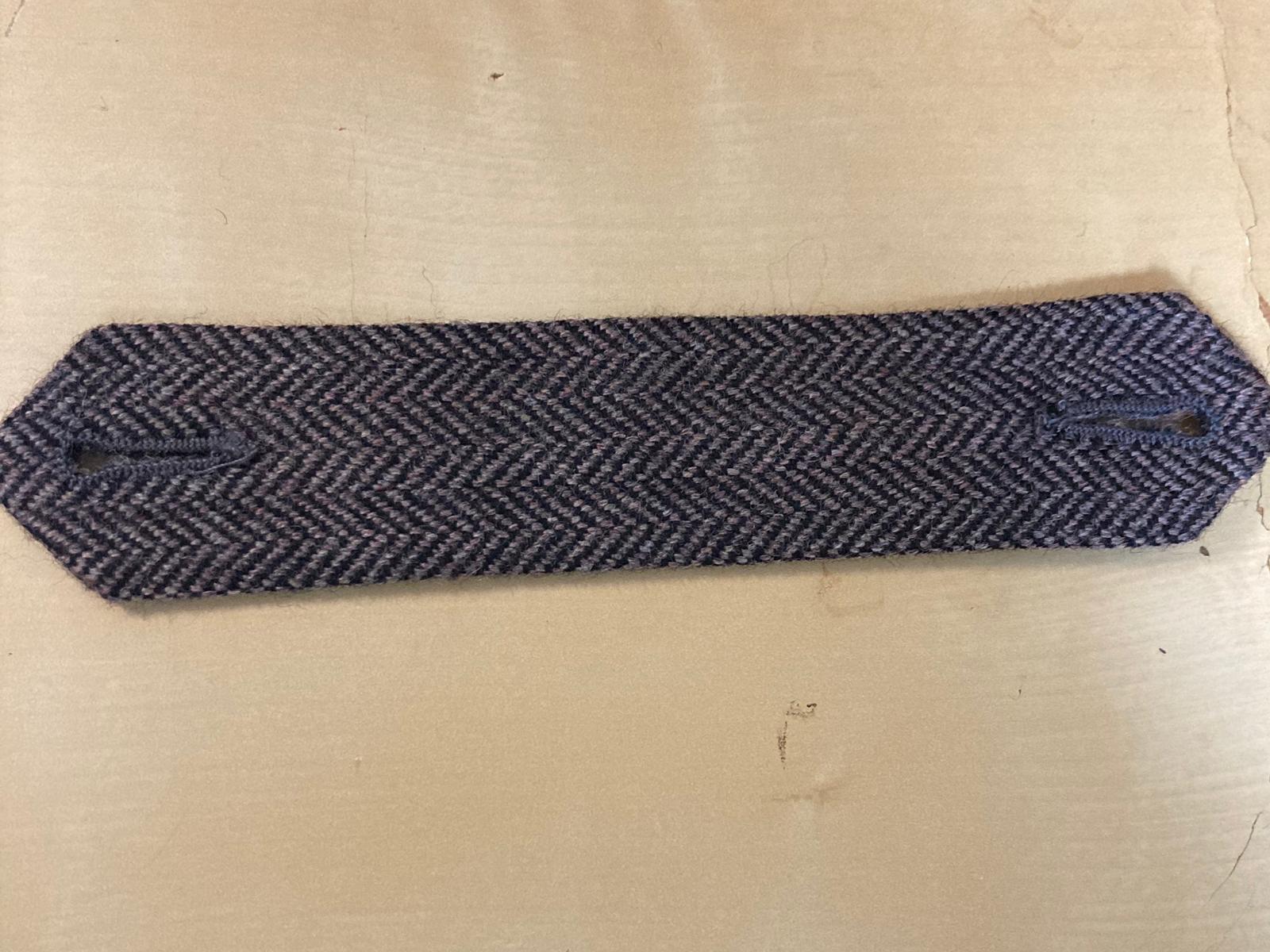 And finally here we are

Based on Matt’s recommendations, we decided to get 24L horn buttons (see below). When this feature is utilised it will make a subtle yet elegant statement. This might just be me, but I’m getting some Timothy Dalton vibes here too.

With my new bespoke Norfolk Jacket, I’m wearing my Sunspel long sleeve Riviera Polo in black, and my black wool bartending trousers I nicked from work. 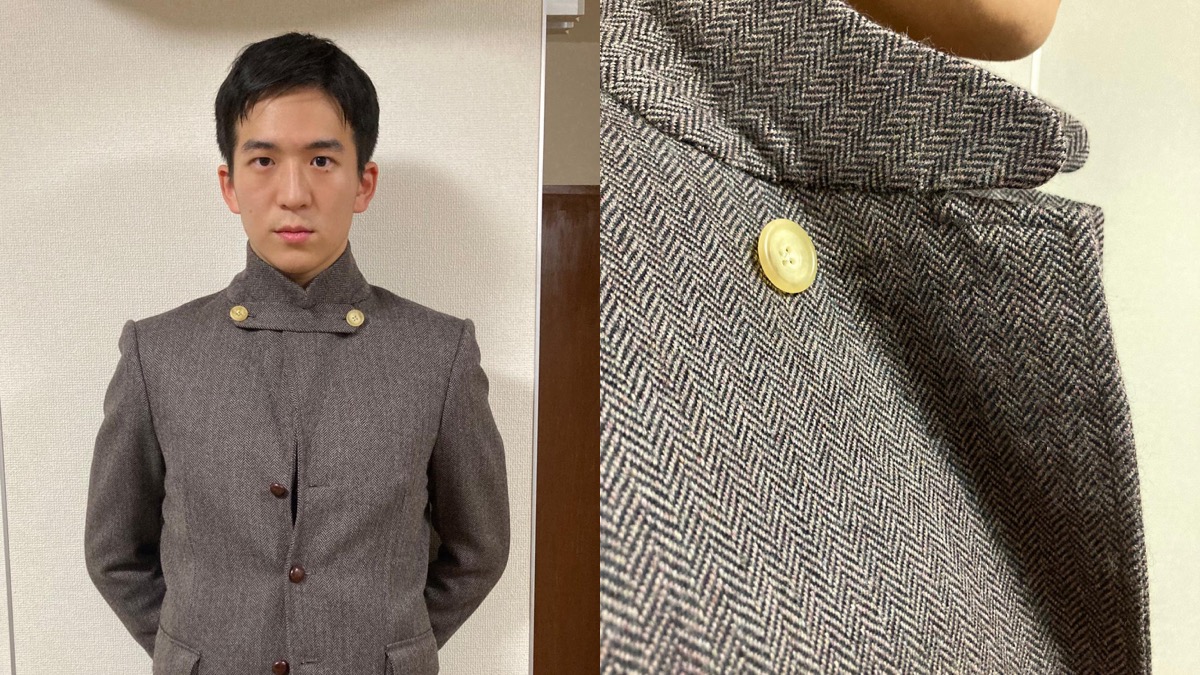 Article by Eisuke Ochiai, Inspired by Bond on Instagram.

The Herringbone Tweed Half Norfolk Jacket in Diamonds Are Forever