The GoldenEye Beige Bespoke Trousers – What if Brioni Made Them?

Along with the two Brioni shirts he ordered with the navy birdseye suit, Raccoon also decided to make a pair of beige bespoke trousers, also from GoldenEye. On a first viewing, however, one may not be able to notice the subtle details of this often overlooked, yet essential wardrobe piece. GoldenEye (and a lot of behind the scenes images) clarifies the fact that every well tailored gentleman needs one pair of perfect beige odd trousers in his wardrobe, wherever you may be in the world. 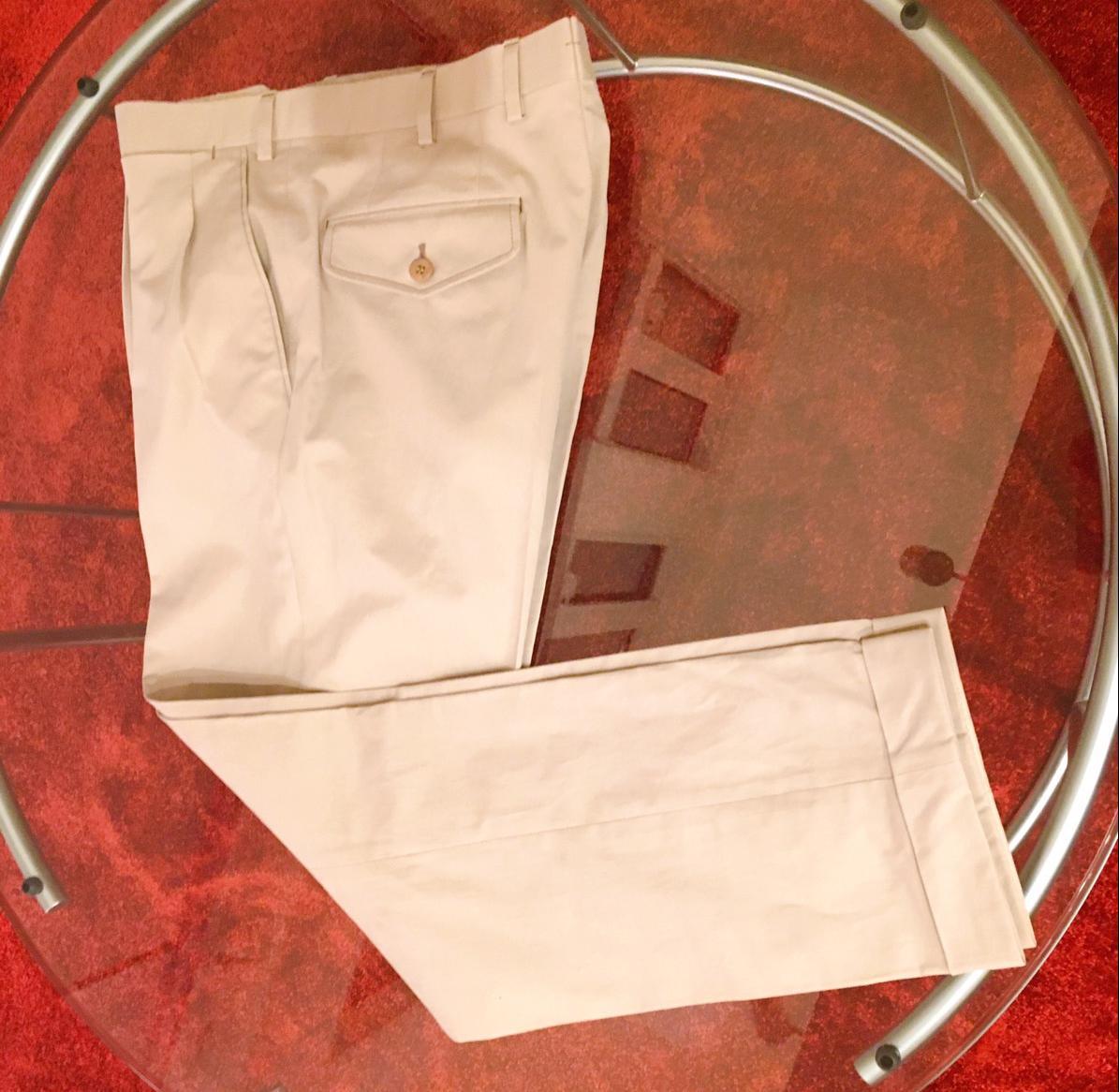 First, let’s look into the details. From this behind-the-scenes image here as Brosnan leans onto the Aston Martin, we can see some fullness around the crotch area from the double reverse pleats and some very close taper from the knee towards the ankle. The trousers have a plain hem and the centre crease is very vague, suggesting a cotton or cotton mix material. The slight nap suggests moleskin. 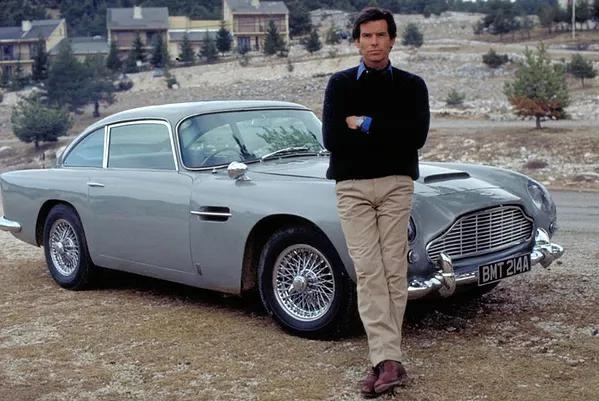 Are you looking closely

Whereas when we look at these two images (above and below), it’s instantly noticeable these are different trousers. The colour of the fabric is slightly lighter than the Aston Martin trousers, and the fabric seems much smoother, lightweight, with much more drape.

The crease also lingers around much more evidently, and considering the fact Brosnan’s Bond wipes his sweat after a brief fight on the boat, the most sensible deduction would be tropical wool. The hems are finished with turn-ups, and the taper is much less pronounced on this pair, resulting in an almost straight leg silhouette. 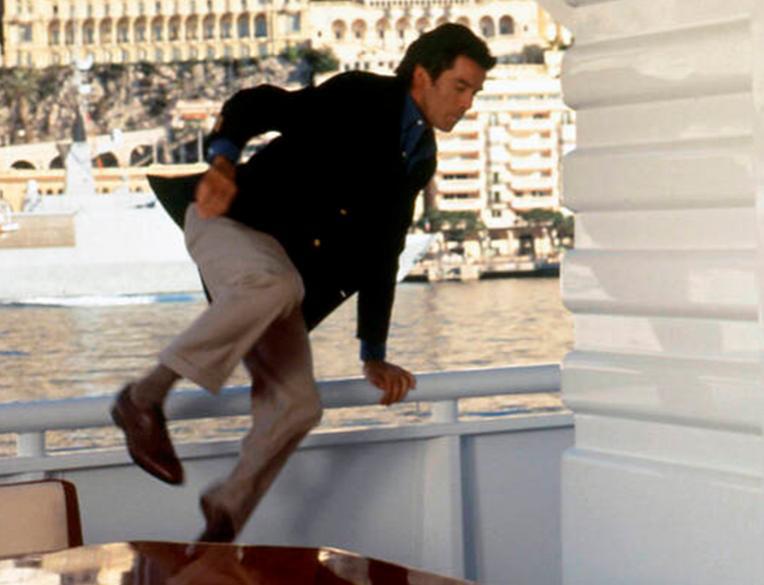 Note the turn-ups and the wider leg silhouette

Well that’s a turn up for the books

Yep, so these are completely different trousers. So which ones did Raccoon make? The answer is… neither. The end result was a perfect blend of these two trousers, assuming these were the exact same pair. It’s movie magic, brought to reality! First, we started to look into the trouser fabric bunches.

We wanted to make a pair of trousers that would have the softness of cotton, but also the sharpness of wool. This narrowed things down a lot for us, as from their vast collections we were specifically looking into “beige, cotton and wool mix fabrics.”

I was a little skeptical about whether moleskin would be in their collection, as it’s an evidently British fabric. Plus, by moleskin, I mean the British variant – so the one with the soft pile, not as long as velour but not as short as chamois. As I had anticipated, they did not have moleskin in their lineup.

Brioni said they only make minor modifications in their seasonal fabric selections, meaning if something had existed in the past, it would pretty much stick around for decades. However, in this case, they stated moleskin wasn’t, or hasn’t been in their lineup as far as he could remember. This meant these trousers weren’t Brioni. 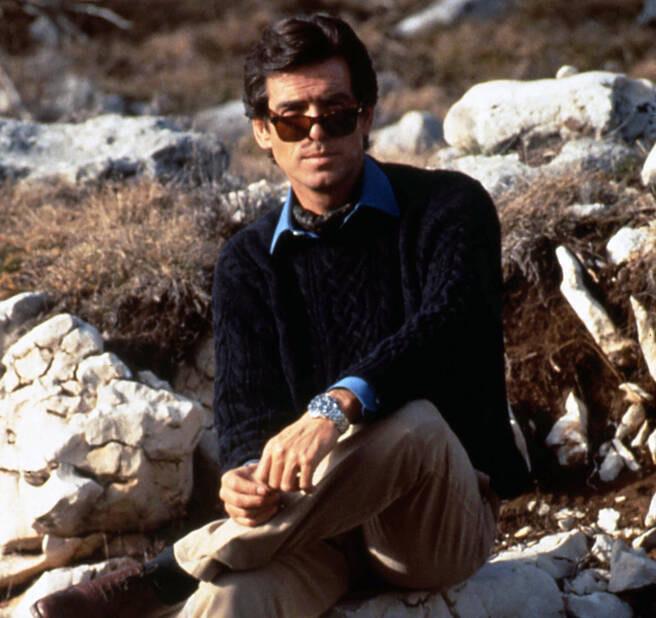 A rare behind the scenes still, emphasizing the soft texture of cotton

How about corduroy baby?

They did suggest similar kinds of cotton, such as a baby corduroy (like Daniel Craig’s in No Time to Die), but the nap seen on moleskin is really one and only. It’s like the trouser version of suede, and the ribs on corduroy would give off a completely different effect. 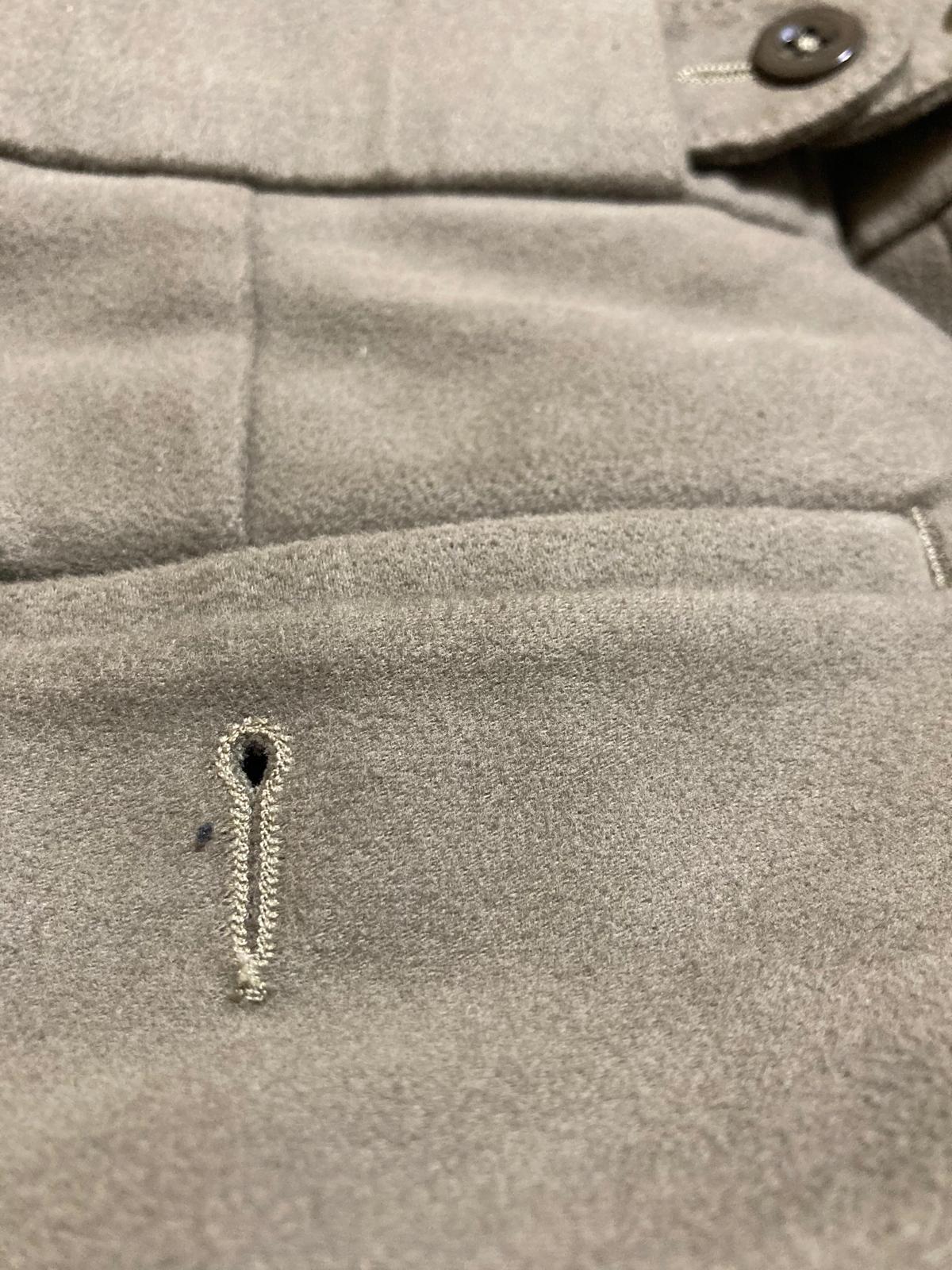 My “British” moleskins from Cordings. Note the almost suede-like texture

But we wanted to stick with this theme, so while we gave up moleskin, we were looking for something soft and sharp. And then we found this: 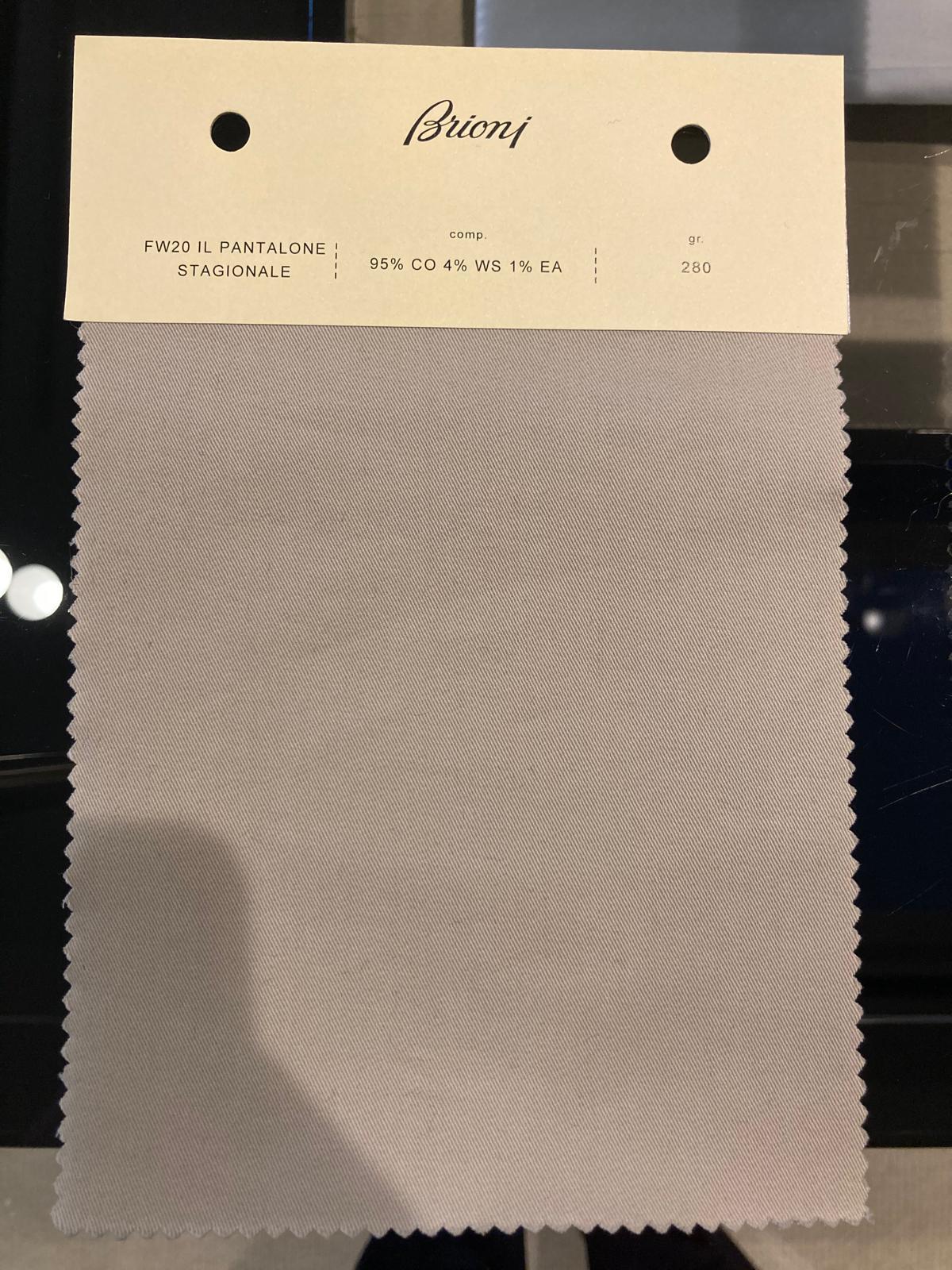 This fabric, from their Fall Winter 2020 “Pantalone Stagionale” collection, was a lightweight blend of 95% cotton, 4% cashmere, and 1% elastane. The composition of cotton and cashmere, according to Matt Spaiser of Bond Suits, is otherwise known as “Italian Moleskin.”

So while it wasn’t the exact British one we were looking for, it would essentially be the “same” but processed through an Italian perspective. Zegna does this cotton/cashmere “moleskin” look too, meaning these are in a way “moleskin” trousers in and of themselves (which reminds me of “German” moleskin, also cotton but with no nap. So many variants of moleskin!)

The hint of elastane is forgivable, given the fact it is like a more luxurious version of an Incotex chino, which has around 3% elastane. While cashmere alone isn’t typically recommended for bespoke trousers, as far as using them as part of a composition make these “soft and sharp” as we wanted them to be. So this is what we decided on.

At the point of choosing details, we thought we’d just make whatever we can make the closest of, assuming these were both Brioni bespoke trousers. We asked for turn-ups, a gently tapered leg… all was good until we said “triple reverse pleats.”
The Brioni clerk suddenly started vigorously flipping through his book, looking for the reference number indicating triple reverse pleats. Brioni has records of all their details in reference numbers so that when they start to make the garment in Rome they don’t mess up any specifications in different languages around the world. After some searching, the Brioni clerk responded triple pleats were not in their catalogue. 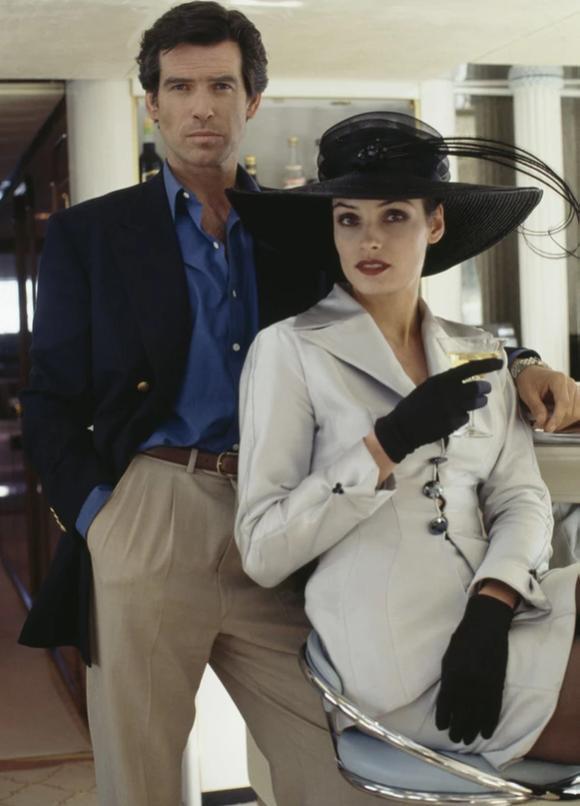 Discovery, not Brioni after all

Back then, we thought it was simply because it’s an exaggerated detail they weren’t willing to do. Or it was something they used to do, but had locked up in their archives as it was such a 90’s detail. However, this was not the case. Brioni stated that even in their 90’s, they had never gone into the realm of triple pleats, despite the pleats galore it was back then. If they hadn’t done this before, it could only mean one thing – neither the moleskins, nor these wool trousers were Brioni!

Nevertheless, Raccoon decided to ask Brioni to make these trousers. The GoldenEye suit was executed so perfectly, they were a natural choice for him. Plus, the thought of making a perfect “alternate universe” version of these trousers was an exciting concept of its own. The real life result was costume designer Lindy Hemming adopting two mystery brand trousers for these casual looks, but what would it have looked like if she’d gone with Brioni instead? How would Bond have looked?

We may never know

As of me personally, I find myself particularly allured to those “made, but never used” concepts – like the beige birdseye suit that was made but never used for GoldenEye, or the left hand twill suit made by TOM FORD for Spectre but replaced with Brunello Cucinelli during filming. It means somewhere, the costume designer (or actor) made a choice to go outside the box to achieve a more particular look. It’s such an exciting thought. As we’d probably never find out the original make of the screen-used bespoke trousers, it was as close as it could get. So the project officially commenced.

As of the details, most of our observations and decisions came from the blazer trousers, as the Aston Martin trousers aren’t visible in the film. We settled on Brioni’s “Snello” model trousers as a base silhouette, the trouser style used in combination with all the “Augusto” model jackets used in the film. Most details are untouched from the suit, but we made a few noticeable differences, particularly fit-wise. 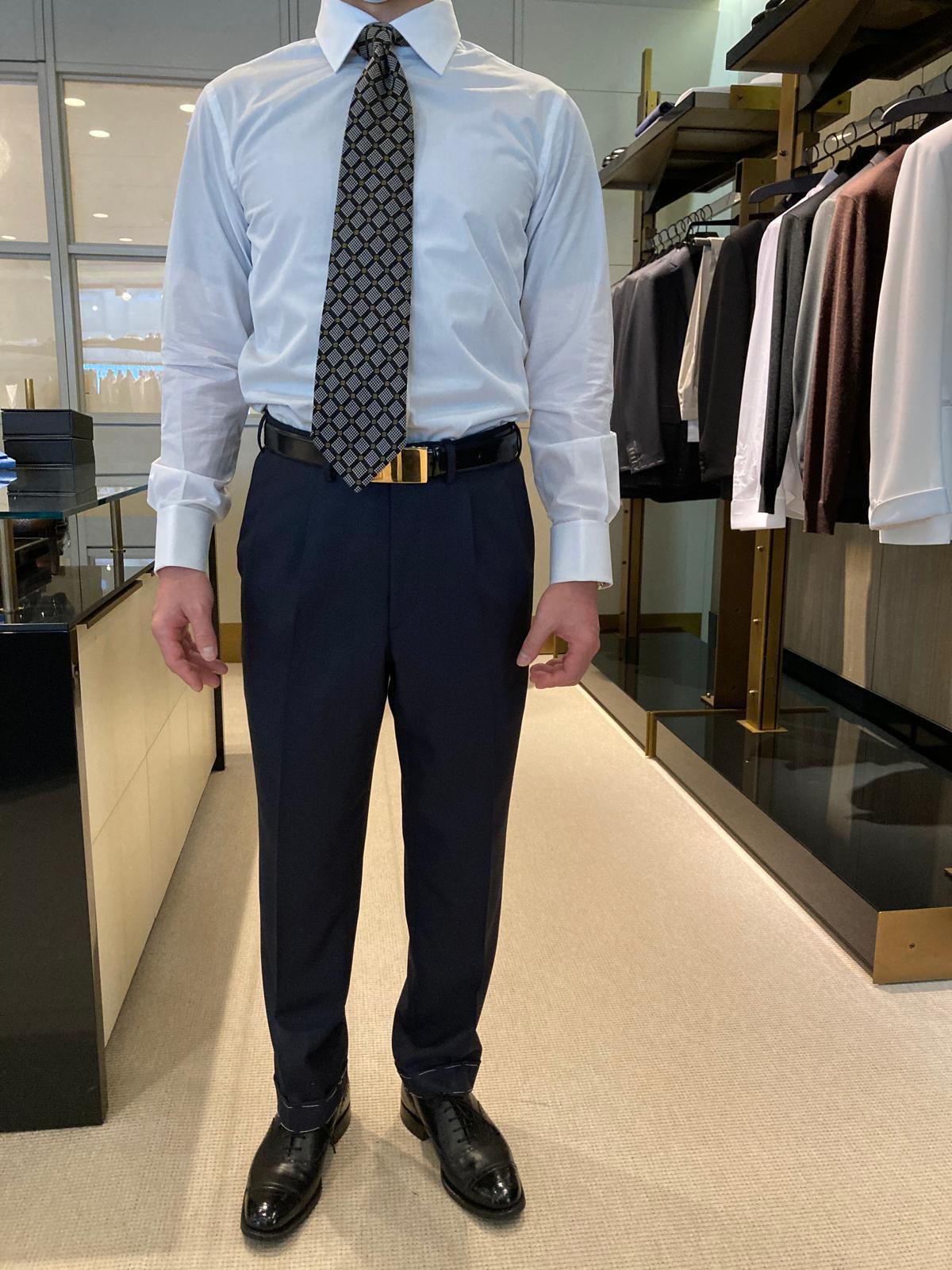 The “Snello” interpretation for the navy birdseye suit

The fact we couldn’t do the triple pleats was a bit of a letdown, but we decided to supplement that by adding just a little bit (millimetre level) of fullness to the crotch area to make up for it. The double reverse pleats already add some width, but the purpose of the third pleat, according to Matt Spaiser is “only to add extra fullness” so making them just a little fuller makes sense. 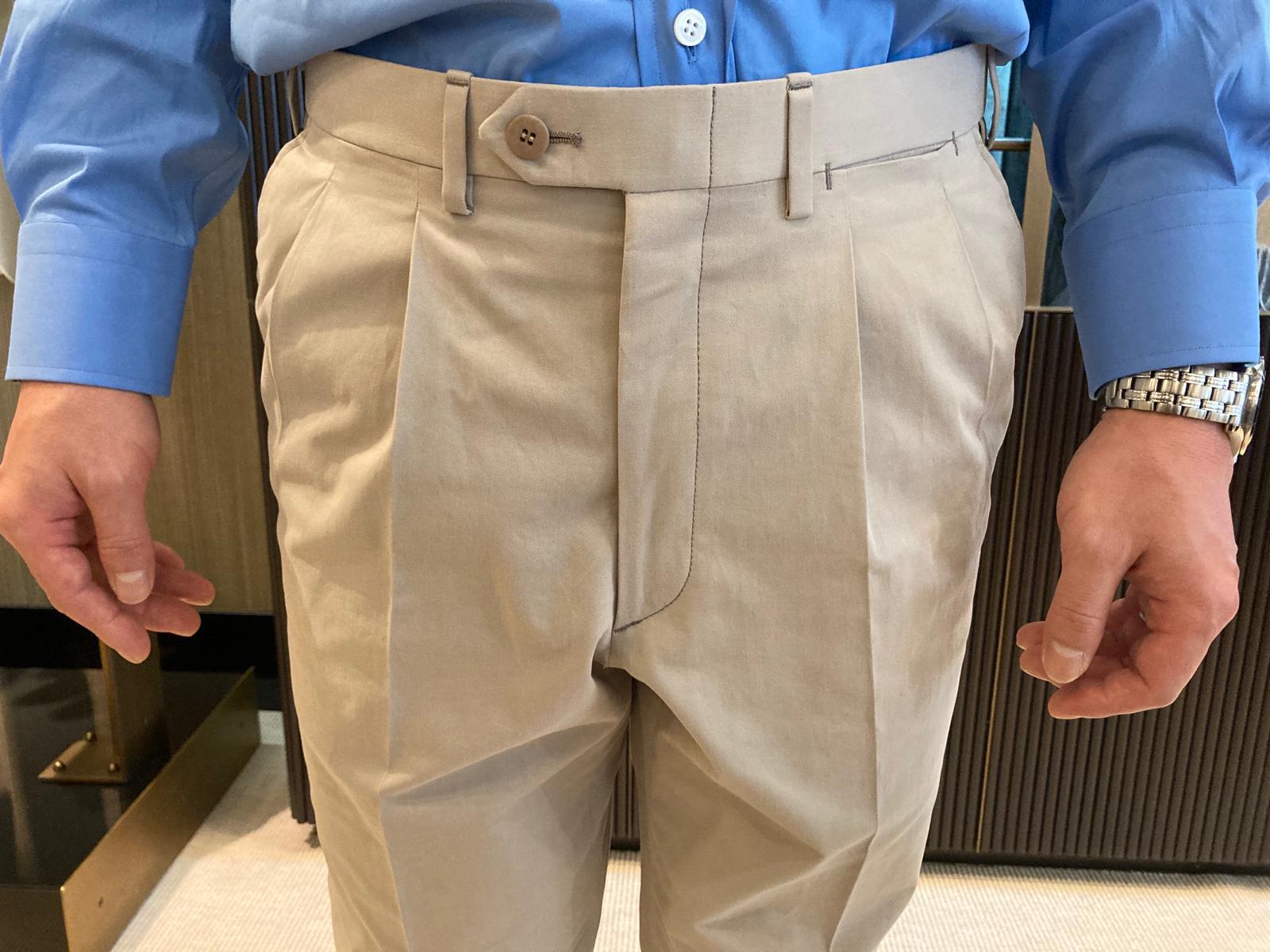 The original Snello fit (meaning “slim” in Italian”) is neatly tapered below the knee, but the fit itself is quite full, particularly in the rear. It may appear less neat, but the purpose here isn’t to make the most elegant pair of bespoke trousers – it’s about replicating a particular look. Plus, cotton has much less drape than wool, so things look a bit different too. 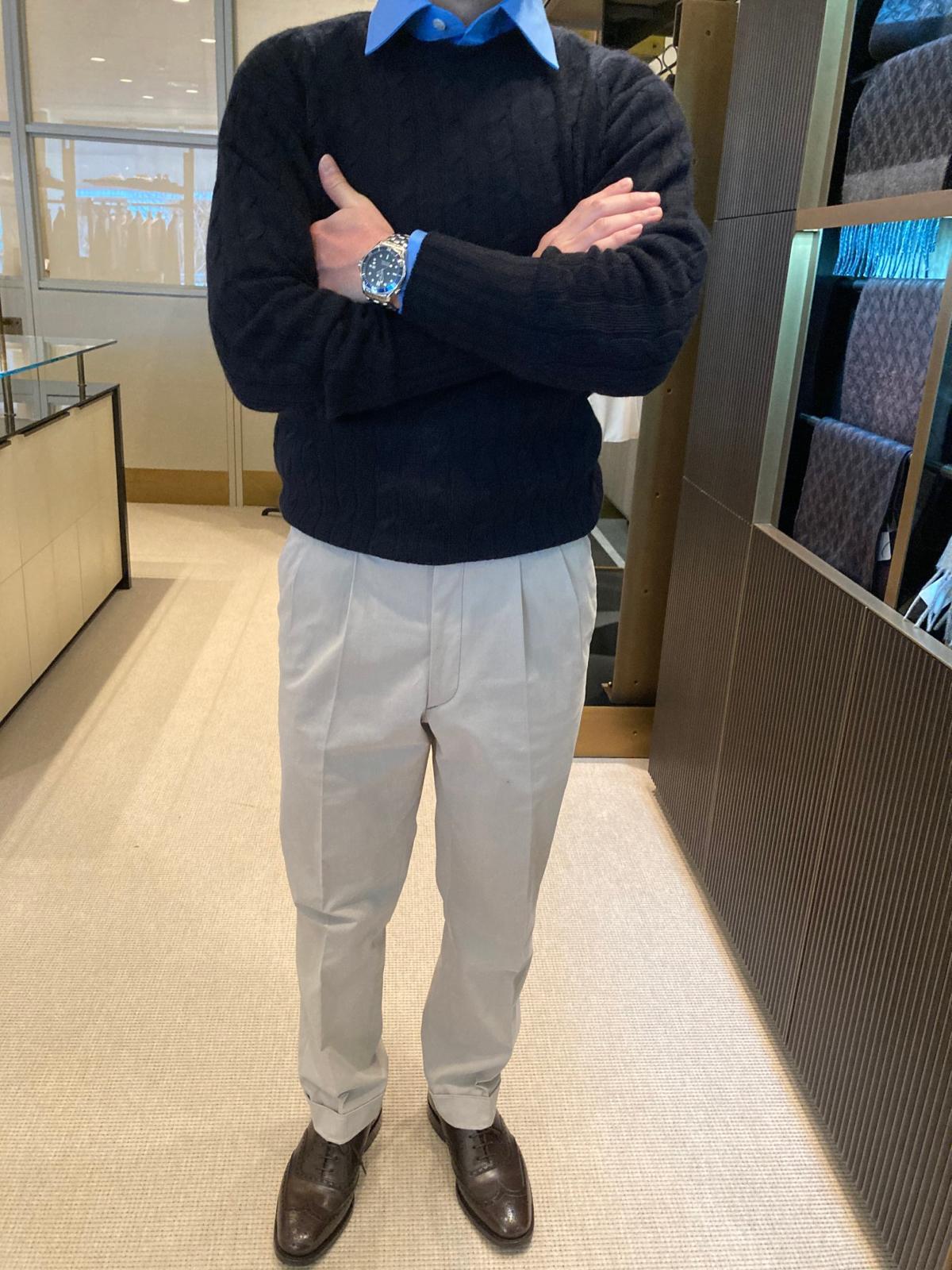 Compared to the navy birdseye, the taper below the knee is a little more pronounced. Raccoon preferred the silhouette of the Aston Martin trousers above the tropical wool, hence we settled on “top half imitation triple pleats, lower half neat and tapered” look to merge both essences of these two trousers. The trousers break much more obviously, carrying on the standard Snello silhouette. 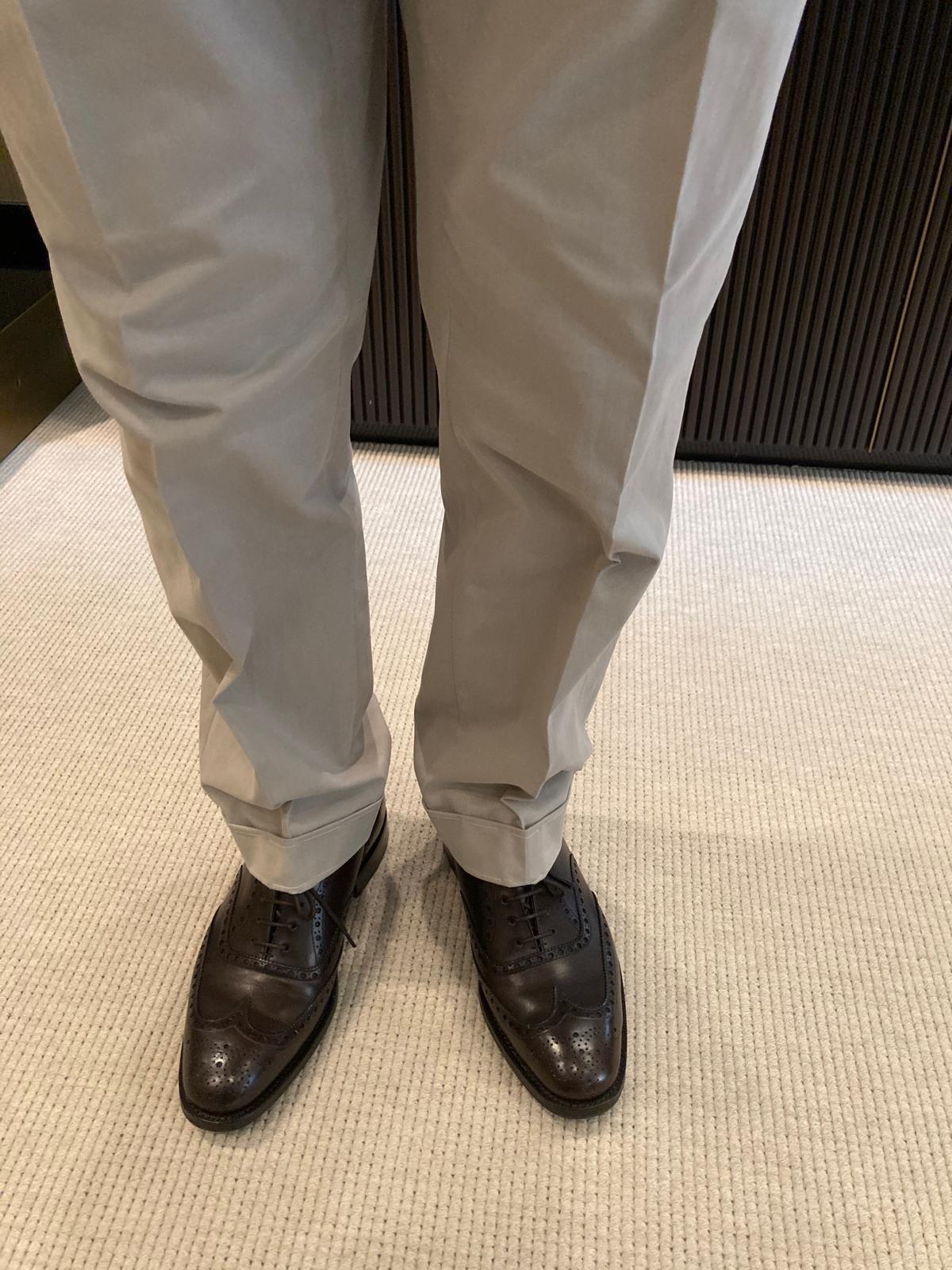 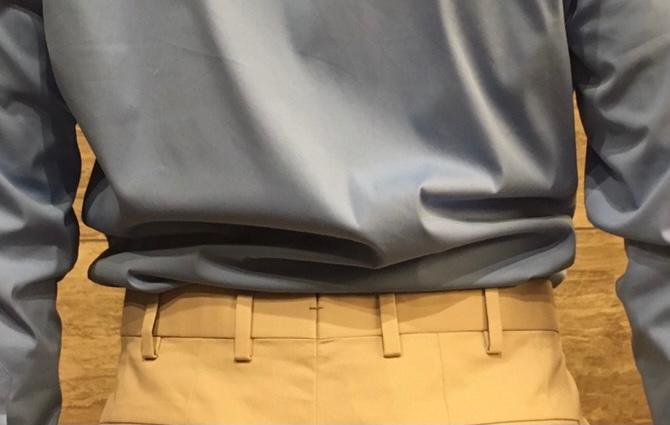 The waistband has an extended waistband with a hook and eye closure, with the waistband ending on a triangular tip, giving a casual impression. As this part is covered by the belt, this was a deduction. The waistband itself is lined by a piece of herringbone fabric. 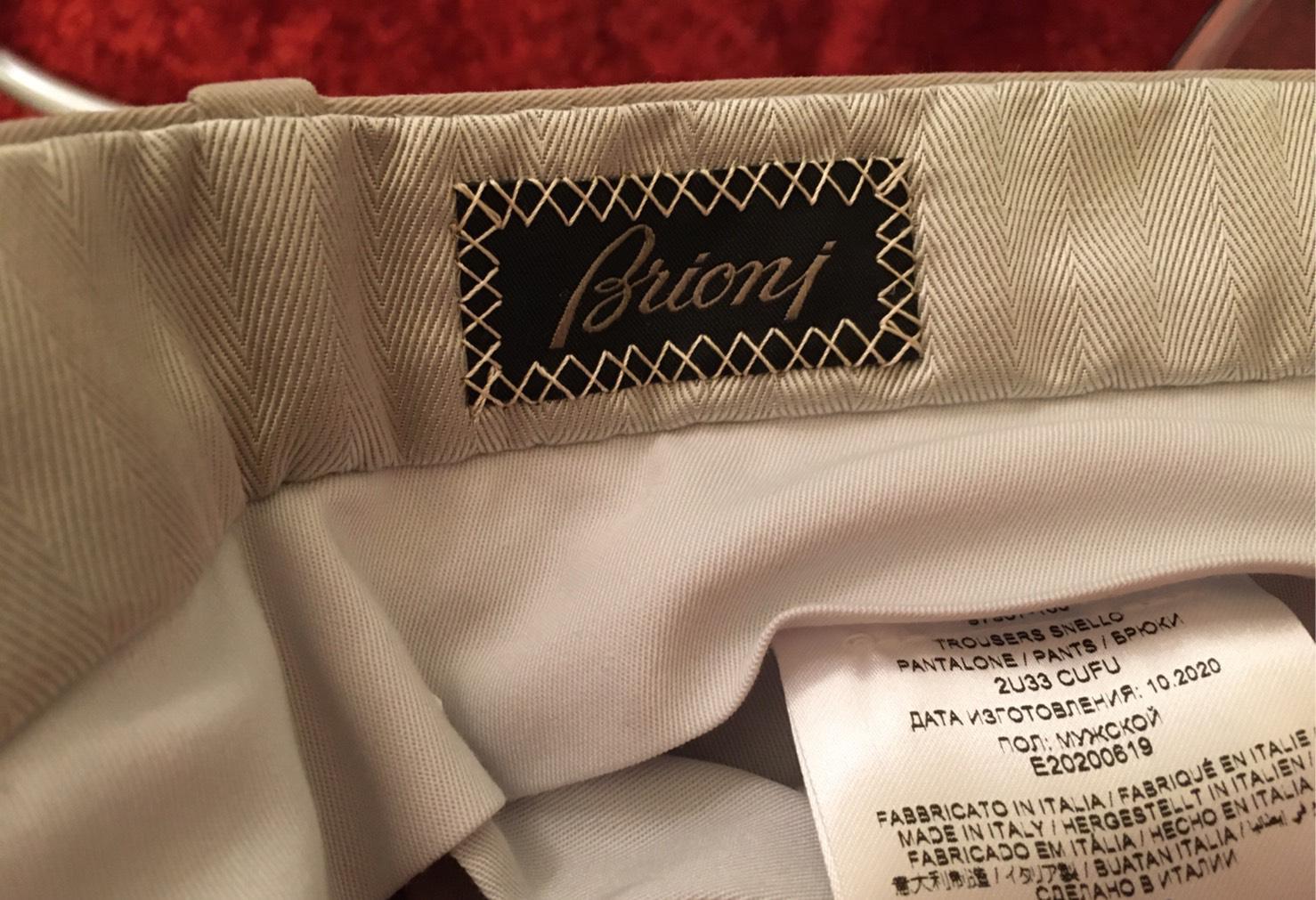 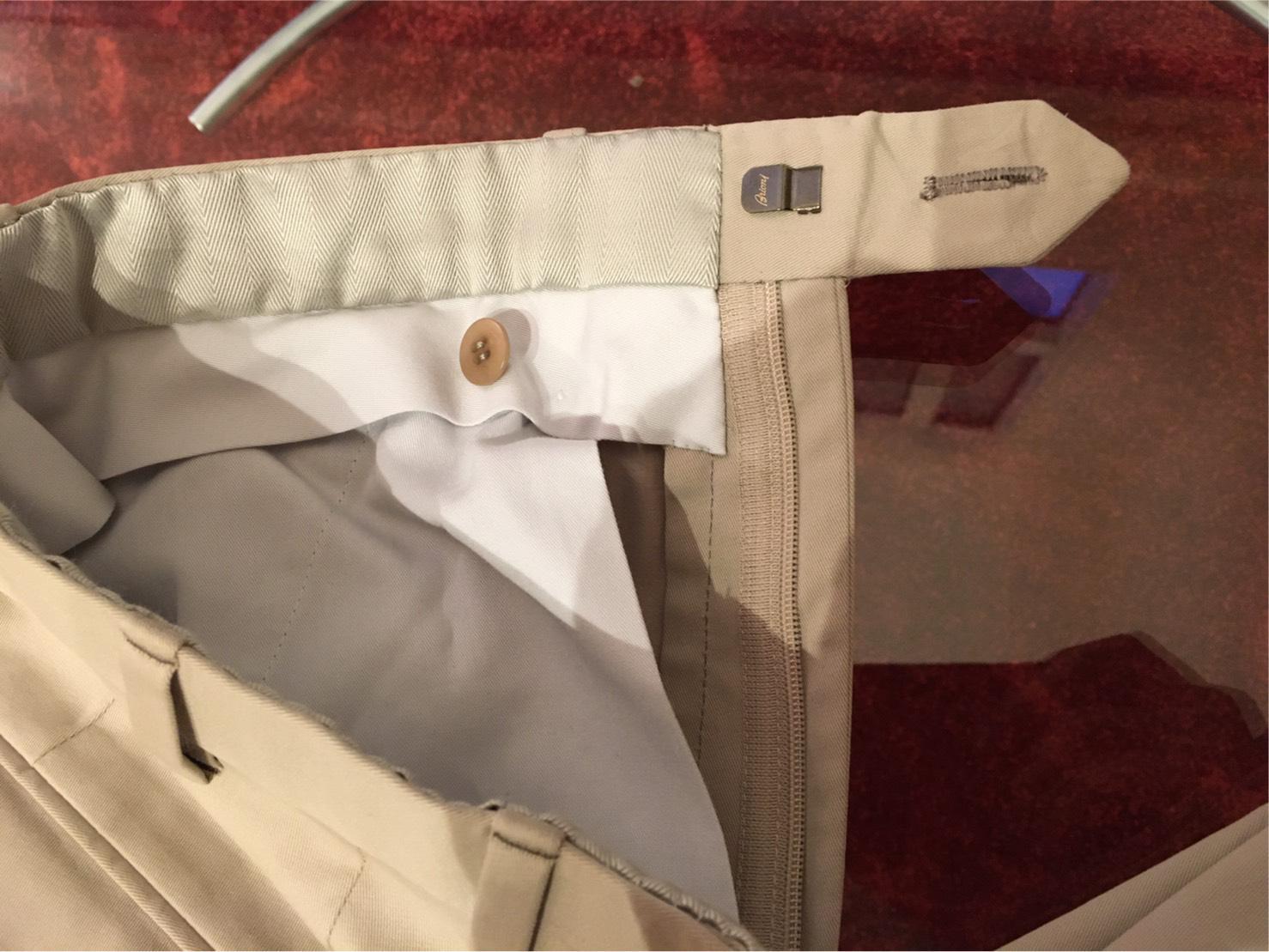 Note the subtle branding on the hook too

The hidden coin pocket is a default feature on the Snello trousers, which we decided to keep. When the waistband is covered by the belt, this pocket serves almost no purpose, but it was a neat touch to keep. The stitching on the birdseye matched the suit, whereas on these trousers the stitching is much more evident. The same can be said with the stitching by the fly, which extends to the waistband. 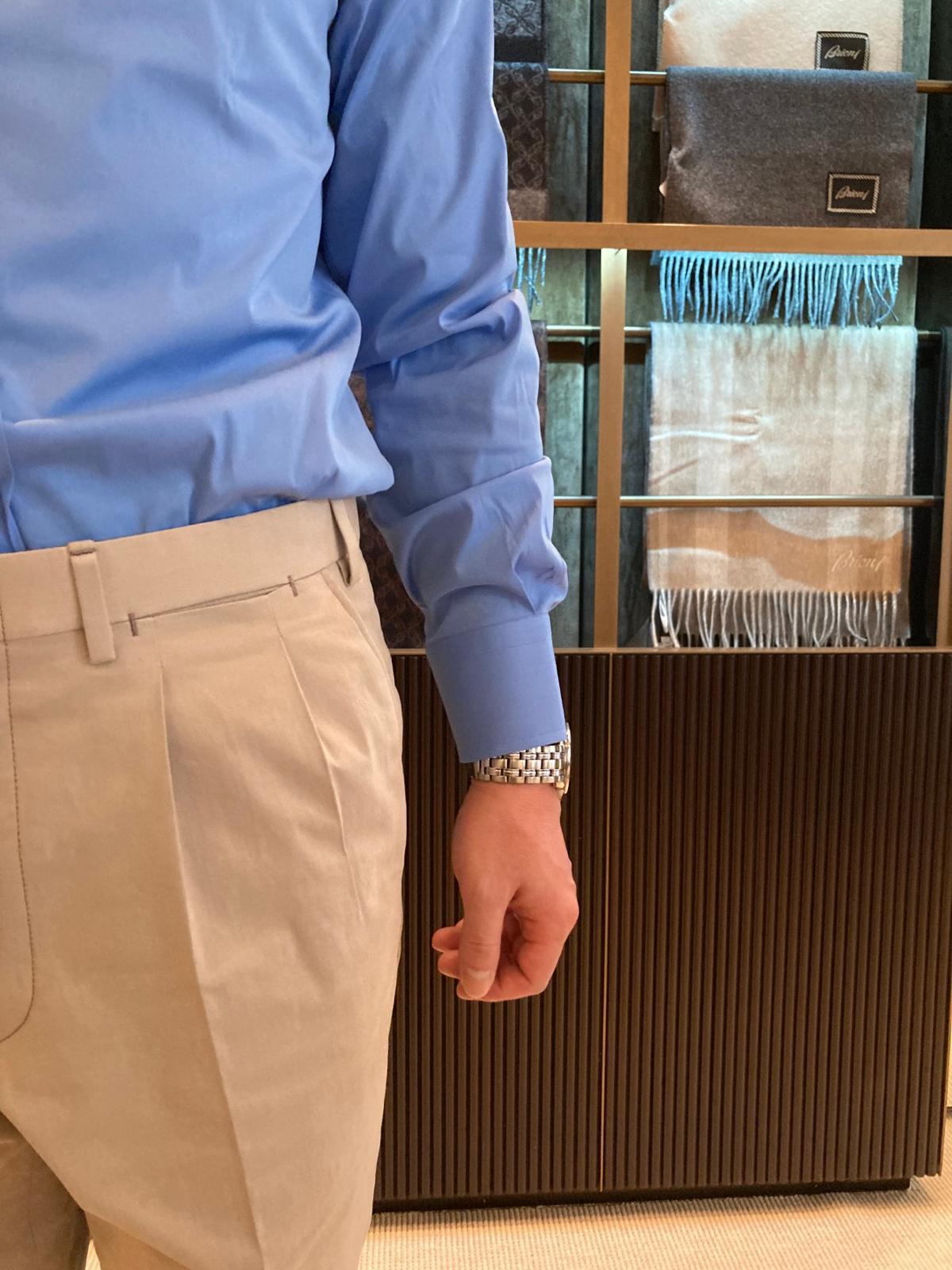 A minor but important detail many have missed is the rear pocket detail. In a blink and you miss it moment, Bond’s rear is revealed below the blazer. The pockets appear to have a button through pentagonal flap, fastened by a contrasting button. 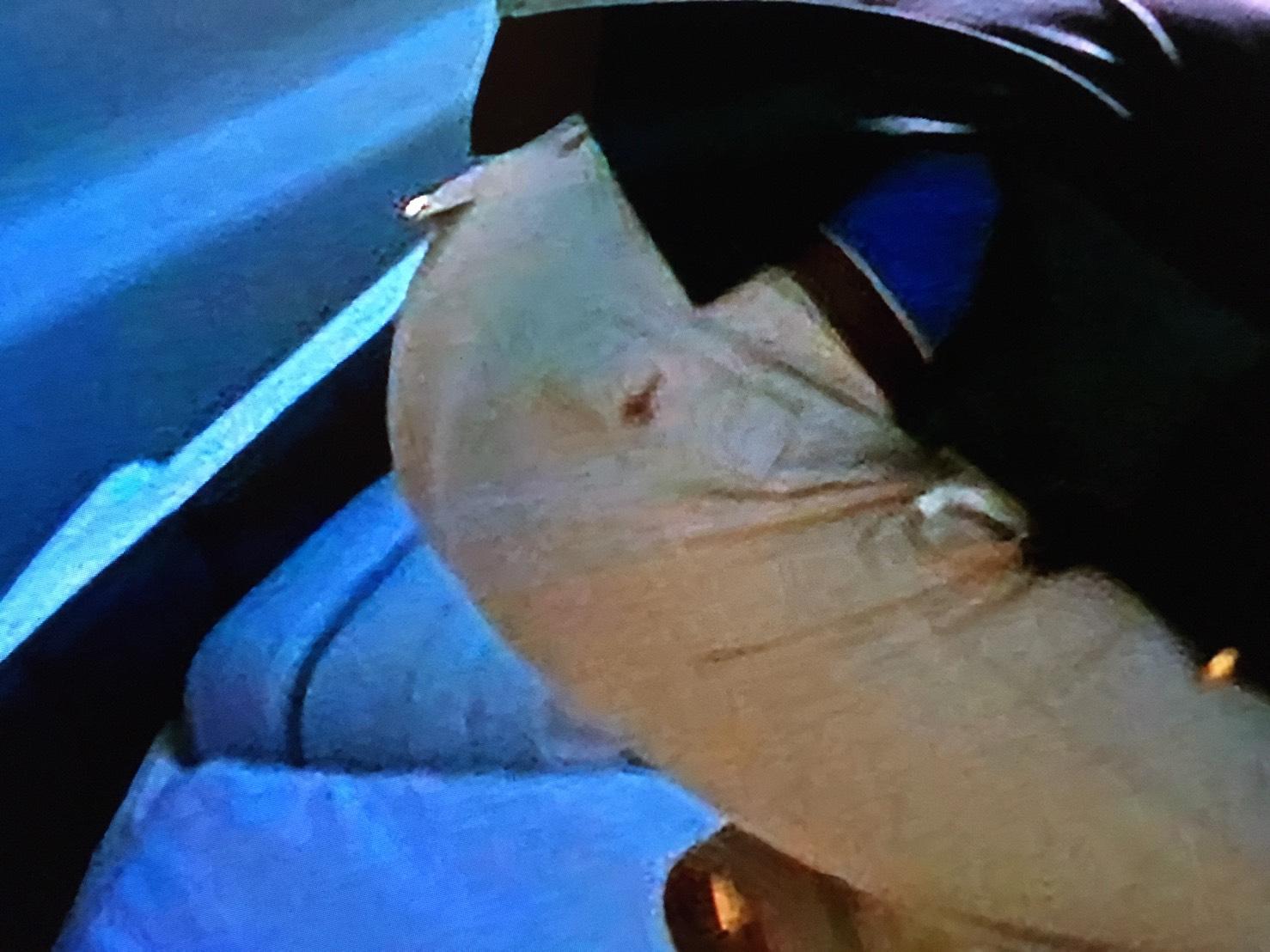 Brioni replied they can do this detail (this one was in their archives) and this was the outcome. The pockets came with 6mm stitching that is reflected on the quarter top pockets too. The contrasting button, in a darker corozo, is a nice touch that instantly makes these noticeable as a pair of casual trousers. The two rear darts continue to the top of the jetted pocket. 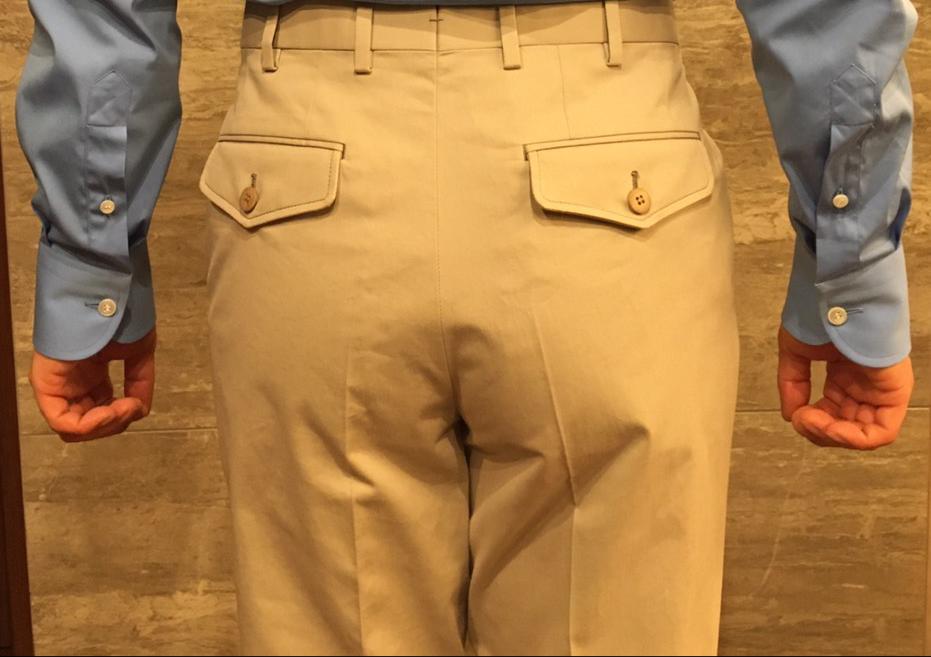 As for the hems, I suggested we go for turn-ups. This was the look seen on the blazer trousers, and if he wanted to switch to plain hems at one point, it would be an easy operation as vice versa would not do. 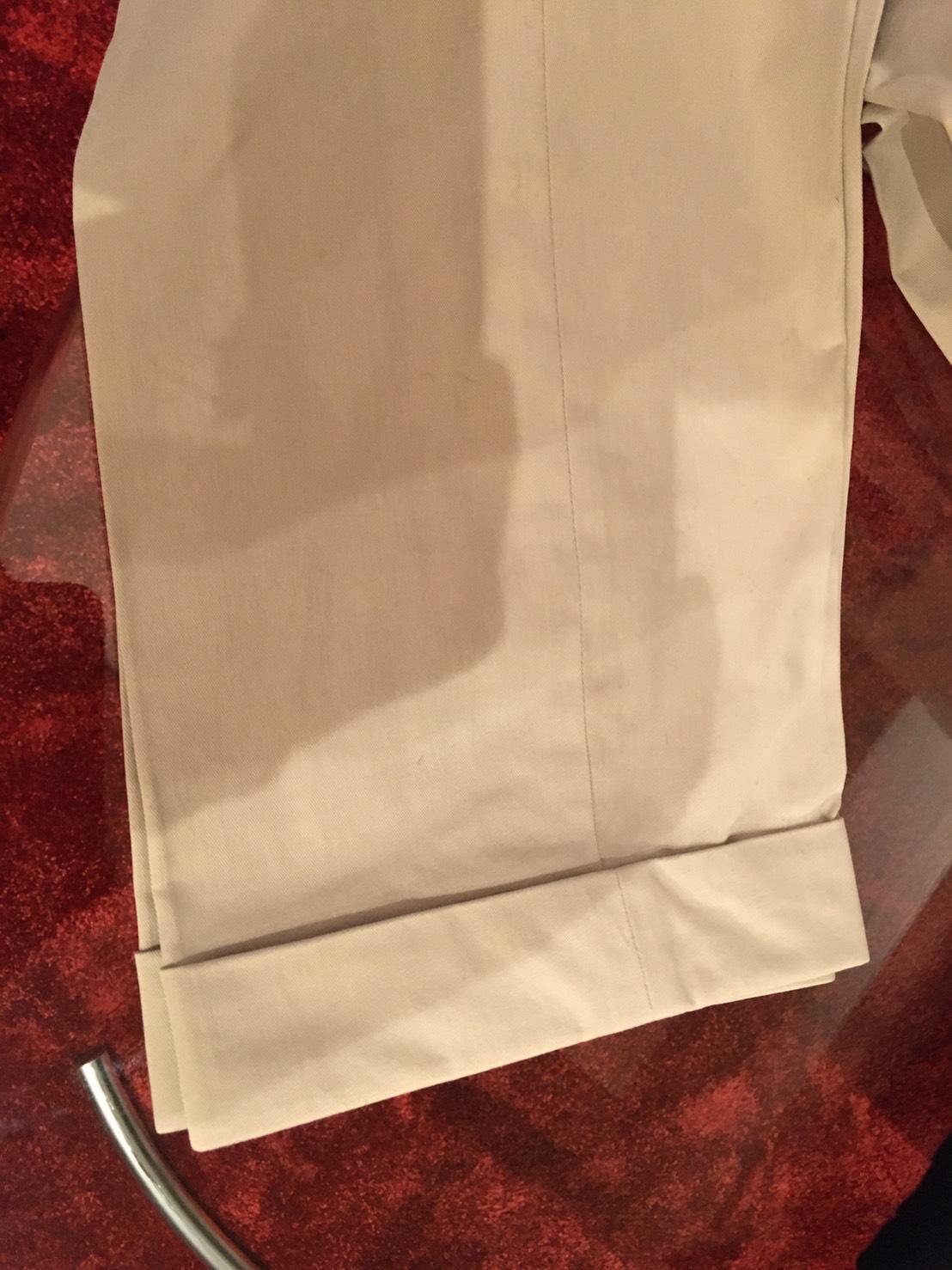 In my opinion, the overall outcome of the trousers takes the best from both pairs – full where we wanted it to be, but neat and clean elsewhere. The shade of beige here is extremely versatile and can be worn with literally anything. These bespoke trousers tick another box of the complete Goldeneye wardrobe – or did it tick two? 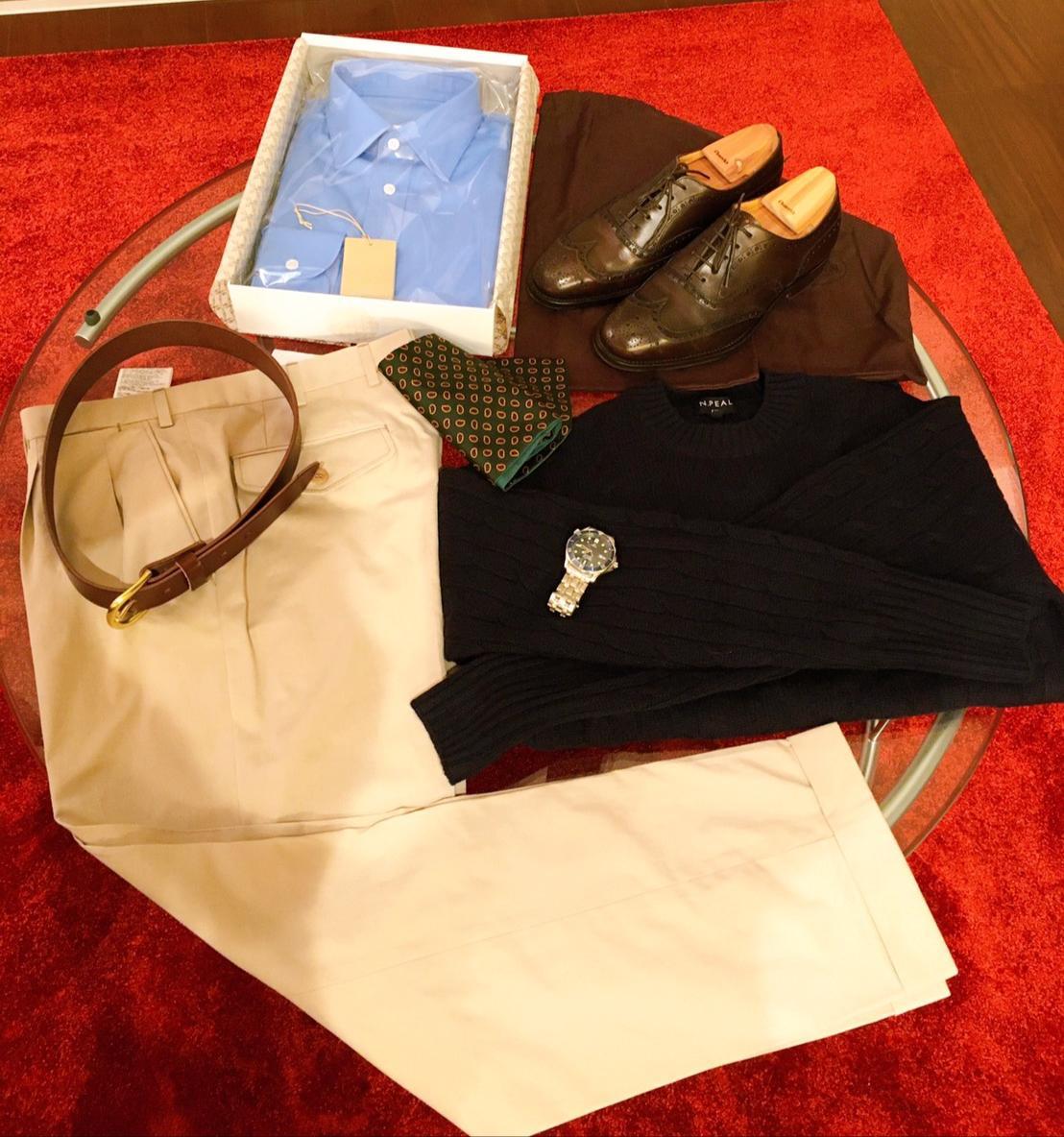 An extra thanks to the Goldeneye Dossier, for supplementing us with these behind-the-scenes stills for this article.