Today I’m going to talk briefly about my Seersucker swim shorts from Hemingsworth, a brand I believe worthy to be worn by James Bond himself. The Hemingsworth Shorts and ’65 Divers watch

Why would James Bond wear this?

I have it on good authority that Daniel Craig already owns a pair of these. As we know Daniel Craig has an incredible amount of influence on James Bonds wardrobe and I won’t be surprised if you don’t see these make a cameo in his last appearance as Bond, No Time to Die.

In an interview with Matt Jones the co- founder he told me, (Loosely transcribed),

They were filming on the last film (No Time To Die) […] he (Daniel Craig) went into his bag and said, ‘you know, I don’t want to wear these ones. I want to wear mine,’ and he pulled out the scruffiest shorts possible. I didn’t know this, but he’s had one of ours the Hemingsworth clipper for a long time. (Craig said) ‘I want to wear this,’ and so they then got in touch the wardrobe team and we created 30 pairs for the film.

Unfortunately, things like sponsorships licenses, all that wonderful stuff.

Peter, you can’t sometimes combat but it’s nice to know, that James Bond probably wouldn’t drink a luminous green beer. And he also would wear Hemingsworth shorts if he wasn’t being paid to do so.

You can hear Matt say this on the podcast, link to player below. Originally recorded for the Menswear Style podcast.

Hemingsworth is a brand that is truly keeping the British end up. (As Bobby Morreli from Matched Perfectly would say).

As much as I love Orlebar Brown, they cannot tick all those boxes. 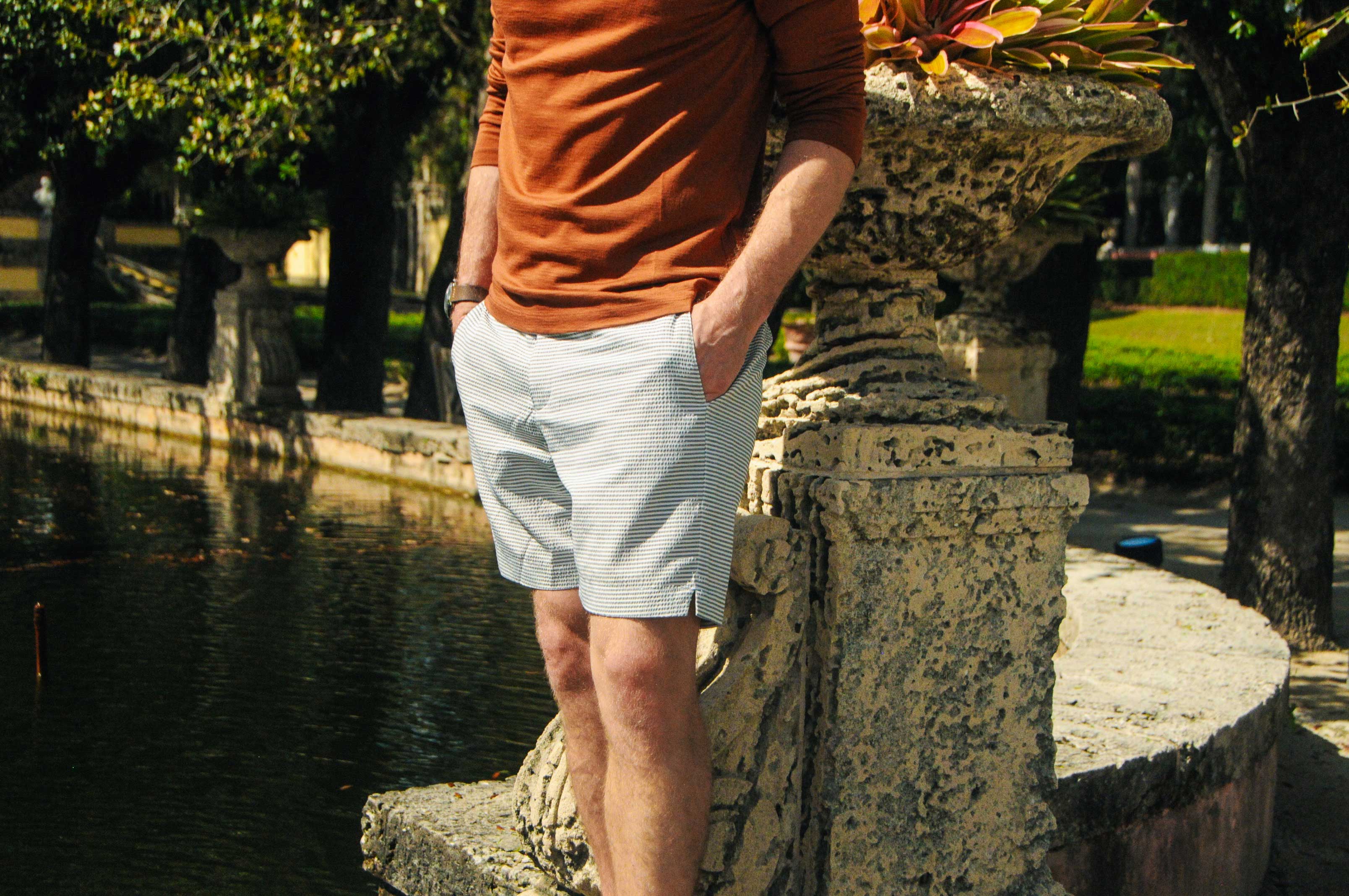 You may have seen from my Instagram that these shorts have become a loyal companion on my travels. A call to arms

The name is Seersucker

The fabric is Seersucker, perfect for allowing the heat to dissipate around the skin and luxurious enough that they can worn around Hemingway House where Bond leapt from the balcony to avoid capture from Mi6. (Okay so I had to crowbar that in).

Perhaps I should point out the obvious that these swim shorts also have a mesh lining. They ARE designed to be worn in the water.

The Seersucker jacket you see in the pictures above is also Hemingsworth although was a size too big for my frame. I put a video together on my old YouTube channel which you can see below.

For more information on Hemingsworth I suggest you visit their website. If you’d like to see these shorts up close they currently have a concession in Selfridges, London.

These are currently listed at 185 GBP.

A more eloquent and in-shape Bobby Morrelli has also written about these shorts and included a conversation with founder Matt Jones, over on his blog Matched Perfectly.