The Carrara Marble Quarries is a special place. It’s not only the place where Michelangelo got his marble for the statue of David, it’s only the source for the marble that emblazons the Taj Mahal, but also the scene for the pre-titles car chase of Quantum of Solace. 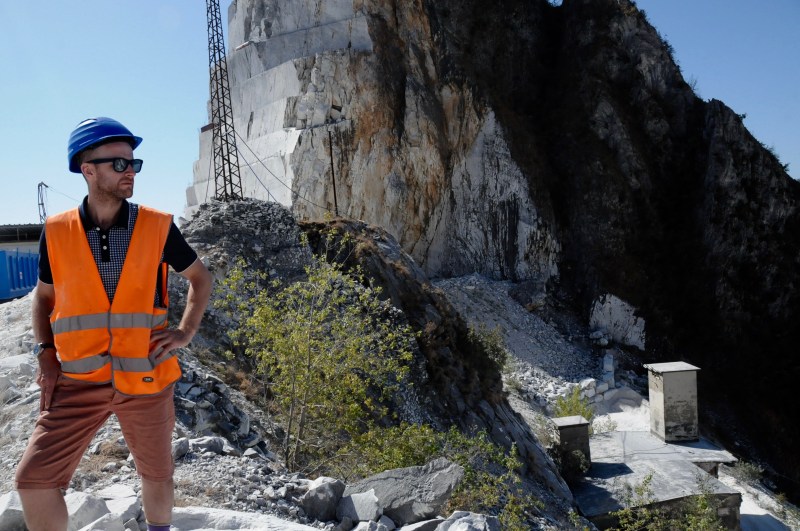 The Carrara Marble Quarries – below, old lodgings that got destroyed in the film

COULD YOU HAVE A CAR CHASE IN THE CARRARA QUARRIES?

Geographically it makes zero sense when you get here, that the car chase starts from the top of the mountain. Bond is forced to re-route to avoid the road block and is mysteriously teleported to the top of the Carrara Quarries.

The topography is slightly incongruous to the continuity of the chase sequence. But we’ll suspend disbelief. Below is the hut the police car drives through. It used to be a hut that the workmen would stay in overnight. 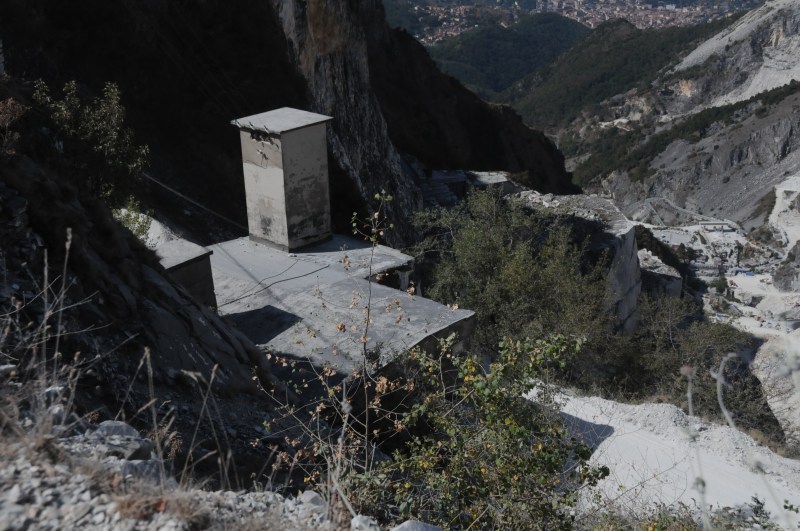 Not all the workmen wanted to go home back in the day. They’d find it easier doing long shifts and sleeping periodically, getting up early and making money. Its called hustle people.

However, it was not used for 10 years. The James Bond crew asked if they could demolish it and I’m sure a big cheque was signed to make the magic happen.

The car smashed through the building and rolled to the foot of the mountains in one take. 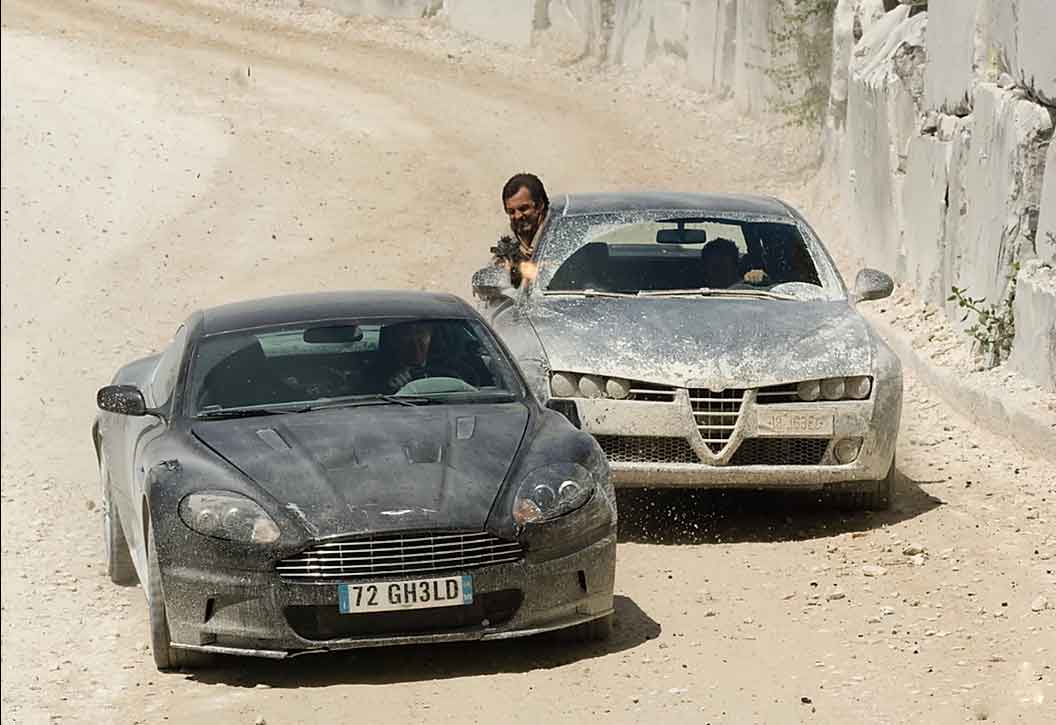 WHAT ELSE IS THERE AT THE CARRARA QUARRIES?

You’ll have a humbling trip around the museum, which showcases the brutality of the Carrara Marble Quarries. Many workers died. Many workers still die carving rock from these faces.

The rights of workers was introduced in 1950. Many didn’t have insurance still and those that got injured stayed without work and without salary.

For ten pound you can get a tour of the mountain. They take you to the top, and bring you back down in a Jeep defender. The driver rages around the road that threads the quarry, never getting out of 3rd gear. 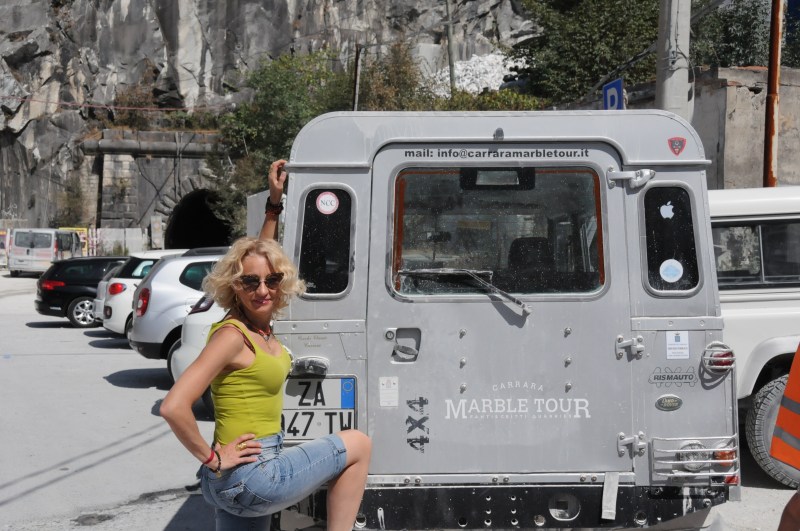 Apparently there’s a law suit going on with the family that owns the Carrara Marble Quarries and UNESCO. Obviously one wants to preserve the landscape, the other wants to carry on making sh*t tonnes of cash. 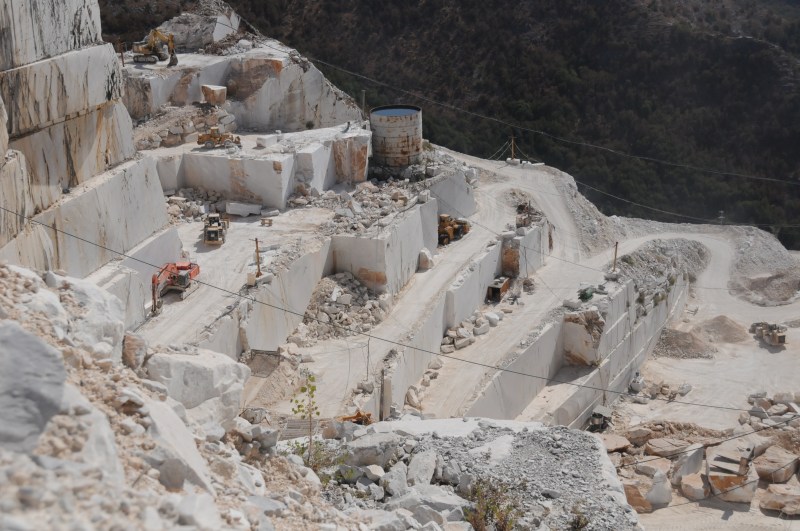 FURTHER THOUGHTS ON QUANTUM OF SOLACE

The tailoring by Tom Ford is arguably the best of the Craig era.

Despite the dislocated script there are some very decent lines dealt by Bond.

Favourite Line: “You don’t have to worry about me.”

Craig is also at his most guarded in this his second outing. Convalescing from the loss of Vesper. Spiritually he is broken, yet for his pathetic love of country, he would be rudderless. 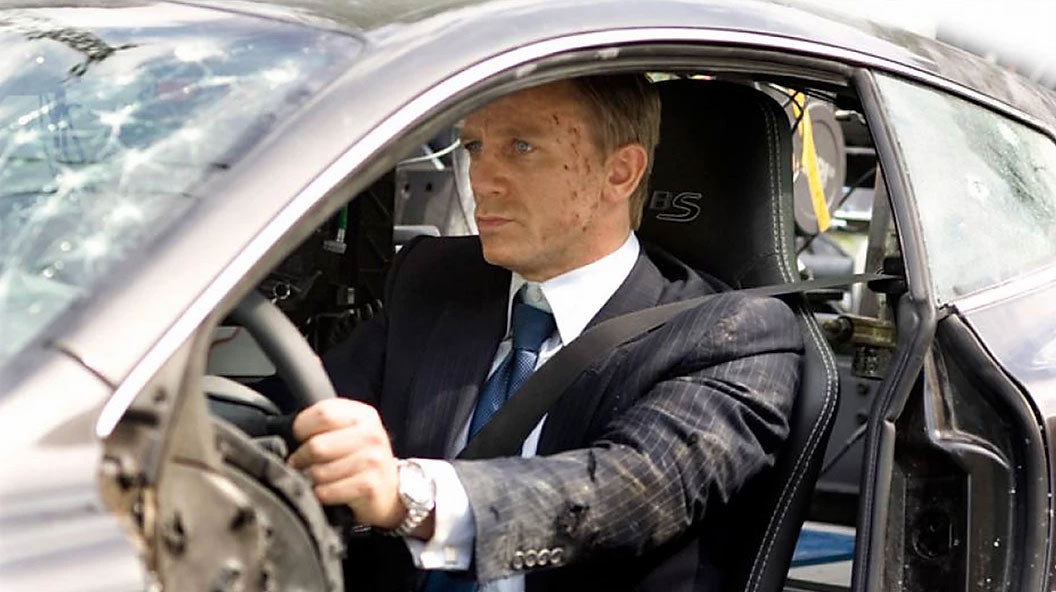 How does it hold up?

Most people that have pilloried Quantum of Solace in the past are intransigent to persuasion. Yet some have confessed that upon revisiting, it’s not as bad as some say, including those that made it.

It has a dour final act yet perfectly formulaic. The score and theme was the last Craig one that truly had any spunk. That had any vim. It’s underrated, but could possibly be a microcosm of what makes the film so divisive; it tries too hard. 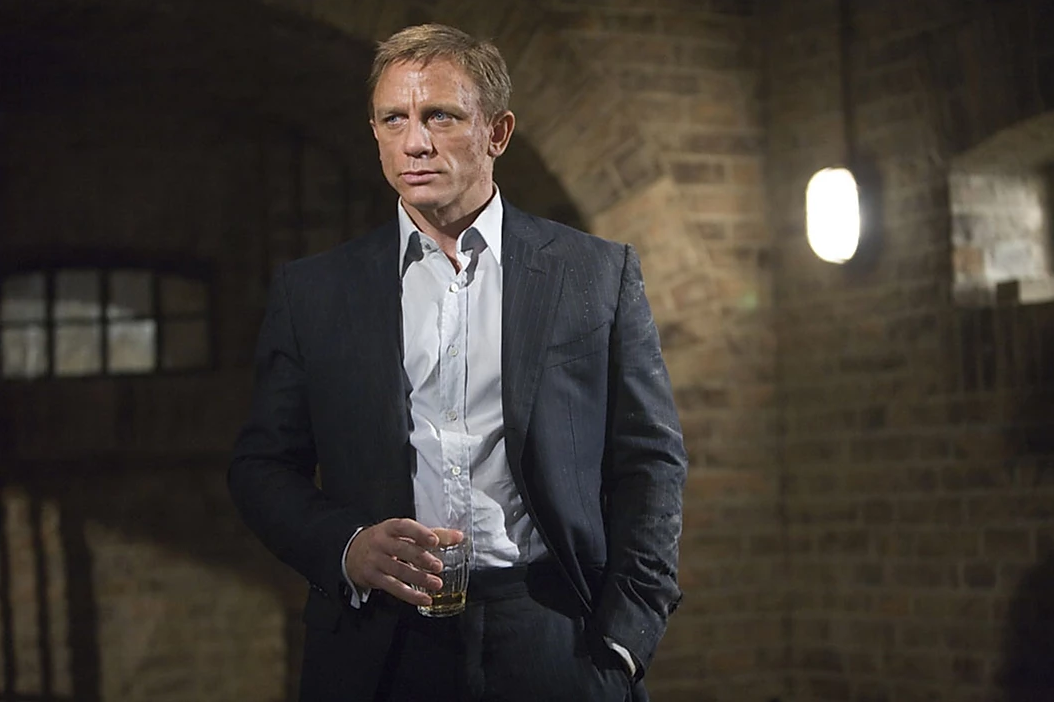 What is Daniel Craig wearing in Carrara?

This suit sees a lot of action. Again I will defer to Matt Spaiser from The Suits of James Bond as I’m sure he’s broken this Tom Ford suit down in nauseating detail. Please bear in mind I’m not stating these annotations as factual observations, merely opinionated. 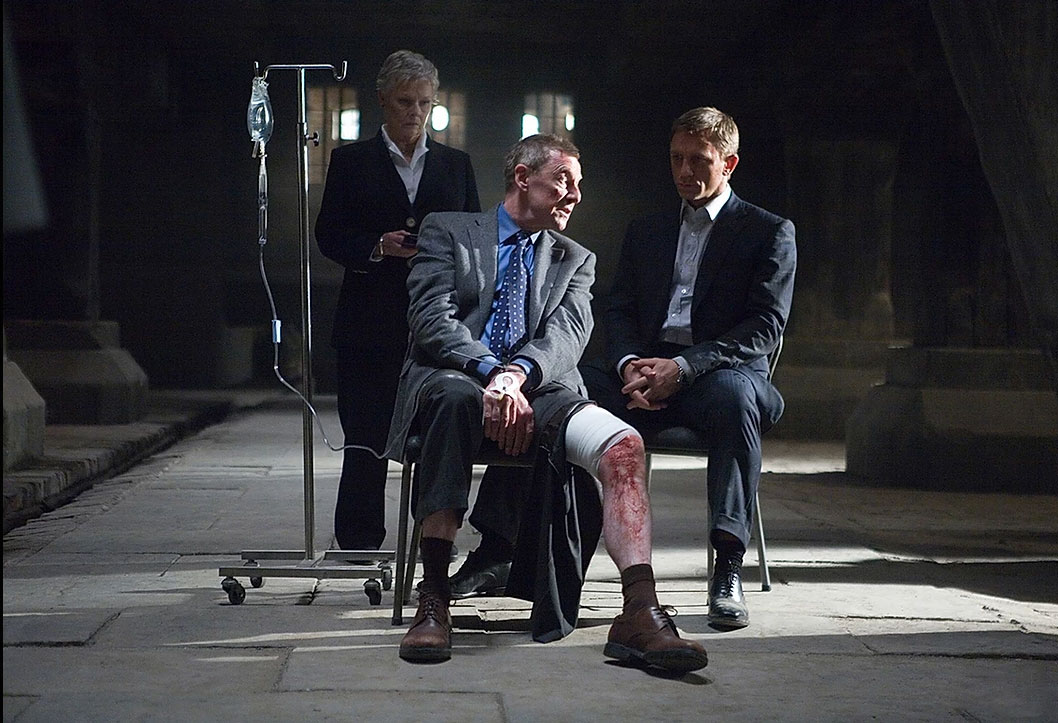 You actually get a better look at the suite in Sienna when Bond is overseeing the Mr White interrogation. He has dispensed with the blue silk grenadine tie. The pin stripe suit has the typical barchetta breast pocket and the shirt boasts a long point collar and double cuffs. 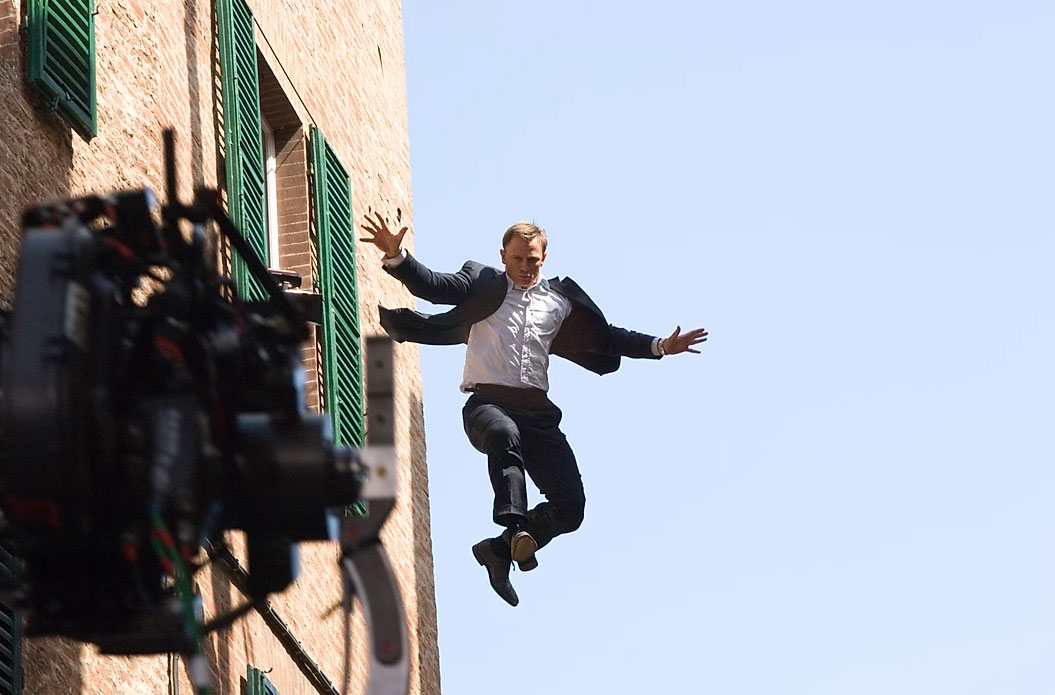 Having reviewed some of the stills of Bond’s attire in both the film and subsequent behind the scenes shots, I’ve noticed Craig intersperses his footwear between some black calf six-lace leather derbies with more practical stunt-wear trainers. 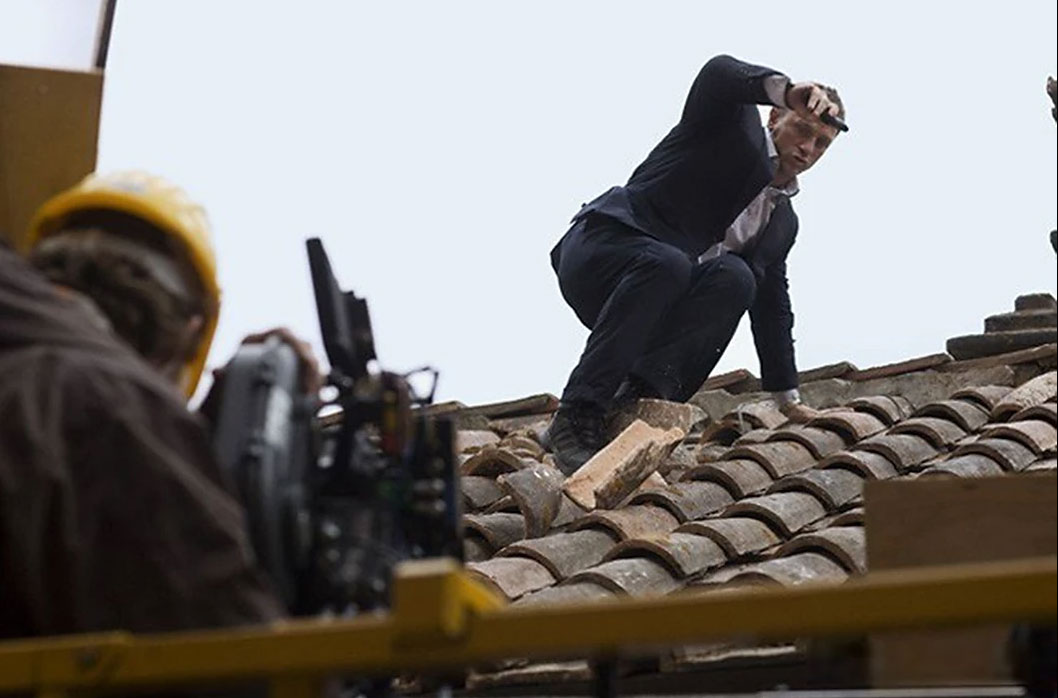 Even the stuntman Bobby Holland Hanton is wearing trainers.

However, when Bond slides down the roof in Sienna they have some clever cutaways to reveal the shoes are still the originals seen in the interrogation.

It just goes to show the lengths that the production have to go to with regards the stunts and footwear. I’ve watched the chase sequence back a dozen times and I can’t spot Bond in trainers once.

Thanks for reading. Don’t forget the podcast episodes can be found on the site here. All the production still used for this post are from the Thunderballs website.

This is a repurposed blog from my visit to Carrara in September 2017. You can follow my journeys of James Bond and style and travel through my Instagram page and send any questions there if you have any.