[…] they painted it to look like 1969 and they left it in a lot of the shops on Hollywood Boulevard, when they transformed it for the film, they left it. They didn’t say please turn it back to crap. 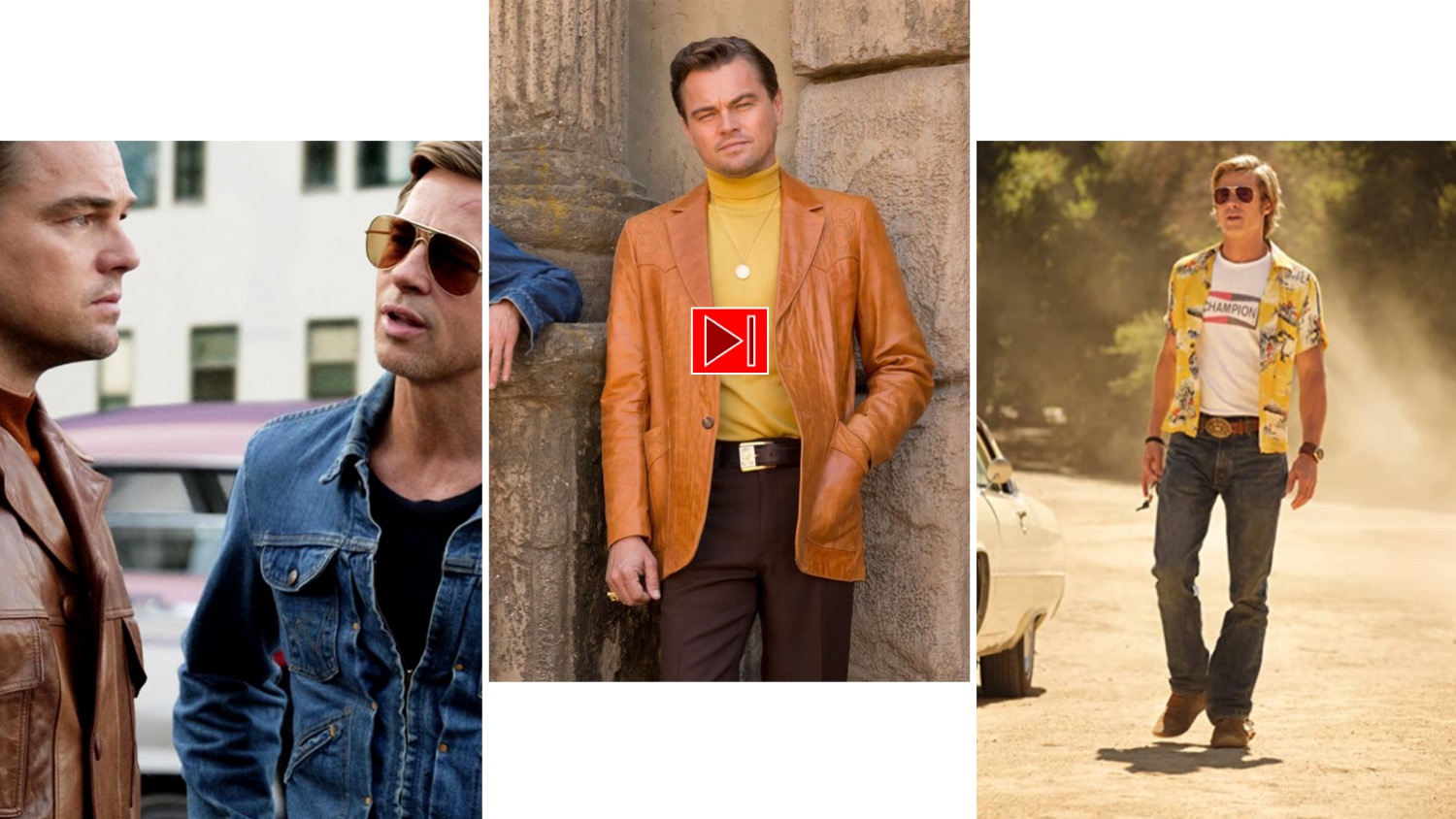 Once Upon a Time in Hollywood

In episode #138 we look at the style of Once Upon a Time in Hollywood. How does the book differ from the film? Even though this film is set in the sixties and later 70s, can we still identify with any of the character’s style and can it influence us today? Written and directed by Quentin Tarantino, the costume designer was Arianne Phillips, whose filmography includes films we’ve previously covered; A Single Man, Kingsman: The Secret Service, and The Crow.

[…] Leonardo DiCaprio (who played Rick Dalton) had up to 30 costume changes throughout. There were some Tarantino-isms in this film with regards to the Hawaiian shirts; Tim Roth in Pulp Fiction, Christian Slater in True Romance.

Whilst the script said that Cliff Booth (played by Brad Pitt) wore a Hawaiian Shirt, the colour and motif of shirt was up for grabs.

With regards to the boots. The boots would always be on show due to Tarantino’s shooting style of panning from the feet upwards. The Dalton character would wear cowboy boots to signify he is a bad arse, maybe try and make up for the fact that he isn’t a bad arse. Where as Cliff’s soft toe boot says he is a bad arse, a natural one, and doesn’t need boots to prove it.

It’s more macho for a bad ass to wear these soft toe boots, proves that Cliff is comfortable in them and has nothing to prove to anyone.

Our dear late friend Chris Laverty of Clothes on Film observed in his Video that, (loose transcript)

Cliff Booth wears an Original Wrangler Jacket Denim 124MJSY (Wrangler released it in line with the film, but went with rivet buttons). The Champion Tee was in the script and recreated for the film. The Hawaiian shirt was custom made and was in the script.

The Bruce Lee chauffeur jacket, Arianne Phillips stumbled across the jacket with a faded Bruce Lee label inside. Supposedly the one he wore in the Green Hornet.

Dalton wears leather blazers. The St Christopher medallion very much modelled on the one McQueen wore. 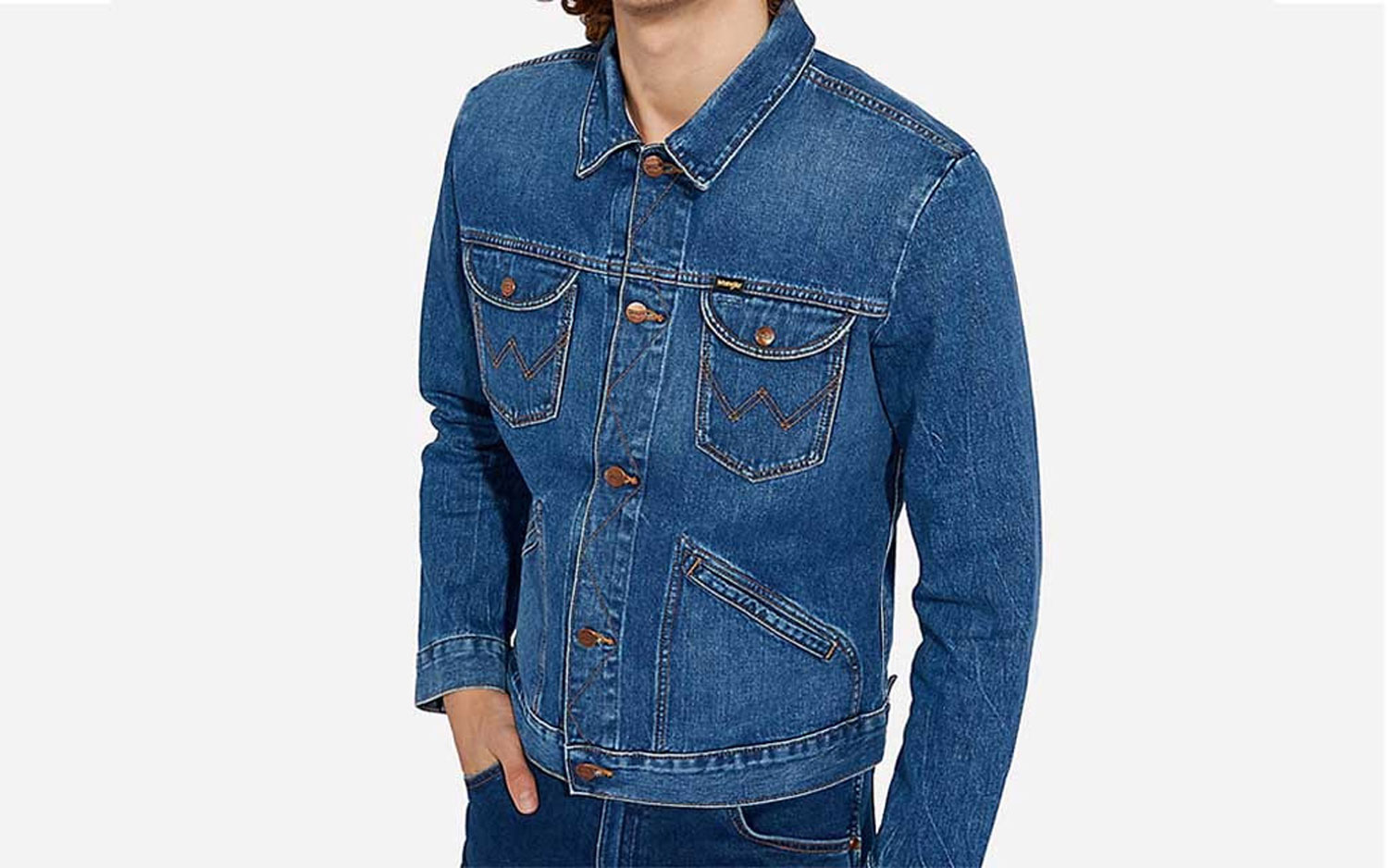 Did the novel Once Upon a Time in Hollywood have any description of the clothes?

In Quentin Tarantino’s first novel, Once Upon a Time in Hollywood, (in my collection) he describes a lot of clothes for his characters. We can only assume these were also transmuted to the script.

This outfit is a left over costume from a biker flick that Cliff had worked on 3 years earlier. At the end of the shoot when he was offered the wardrobe boots included for Billy Jack (his character name in the film Born Losers, or 75 bucks, he kept the clothes). His yellow Hawaiian shirt is mentioned in the book but not described in detail.

Johnny Madrid (portrayed in the film by Timothy Olyphant as “Lancer” co-star James Stacy) – His friend’s clothes not as fancy but just as colourful. In their own right just as snazzy. Latin style sangria red ruffle style shirt. Brown leather shirt coat with black jeans big silver stud down the pant leg. Short brown cowboy hat. Johnny Madrid is referred to as ‘red ruffles’ after his red ruffled shirt.

Rick Dalton when dressed as Caleb on the set of Lancer is described as having a hippy jacket with tassels on the sleeve like in the film. Which he is not a fan of because he thinks it makes him look like a hippy, but he eventually gets into the role. Black Levi’s pants pocket – Rick has a red silk kimono when watering his roses at the end when he meets Steve McQueen on the driveway.

What are the differences from the novel to the film Once Upon a Time in Hollywood?

One huge notice I found was the killing of the hippies which brings the film to a fantastic crescendo, is only mentioned in passing in the book and is nestled somewhere in the middle. It’s the films centrepiece and a throwaway anecdote in the book. So throughout the film you’re left wondering how the book will finish, and spoilers, the book ends with an exchange between Steve McQueen and Rick Dalton, which is not seen in the film.

The book plays a lot heavier on the fact that Dalton rues his missed opportunity by not landing the role in The Great Escape. (Covered in a previous article). In a sliding doors life Rick Dalton could have had the career McQueen had. The film has a fun flashback to this scene, but the book really plays on it and is a real torment to the Dalton character.

Cliff Booth’s backstory is the most enjoyable. In the film Once Upon a Time in Hollywood, there is some slight ambiguity to whether or not he killed his wife on purpose. In the book there is a more protracted portrayal of this event. A quite graphic yet oddly tender anecdote.

There seems to be a lot of this in Cliff’s character. That his tenderness is shown ironically through his brutality. The back story of how he got to own his dogfighting pit bull is like an 18 rated version of Every Which Way But Loose. He goes into partnership with someone who owes him money, and looks to be reimbursed by gambling on this dog. When he feels like the dog has gone through enough, but his partner wants to put her through one more battle, he kills him. Showing compassion for the dog, but equally flexing his lethal and unforgiving nature. Tarantino really takes his time to colour in all these moments and characters.

Joining me on the podcast (available to listen on iTunes, Stitcher or Spotify or in the player below) is John Williams resident of Hollywood and long time guest contributor of James Bond Radio and Nick Guzan editor of Bamf Style. You can also catch our chat on YouTube. Below are some moments transcribed (loosely) from the interview.

Nick did you grab any pieces from the film when it came out?

I guess yeah, three summers ago right before the movie came out. And it’s one of those I try not to wear it all together because then it definitely looks like you’re trying to you know pull off a costume but the pieces themselves, I like on their own. So I found the Champion Tee it’s not a vintage or anything. And then I was just looking for any yellow aloha shirt. I’d always been a fan of the style and yellow was one of the colours I didn’t have yet. So yeah, I put that together. 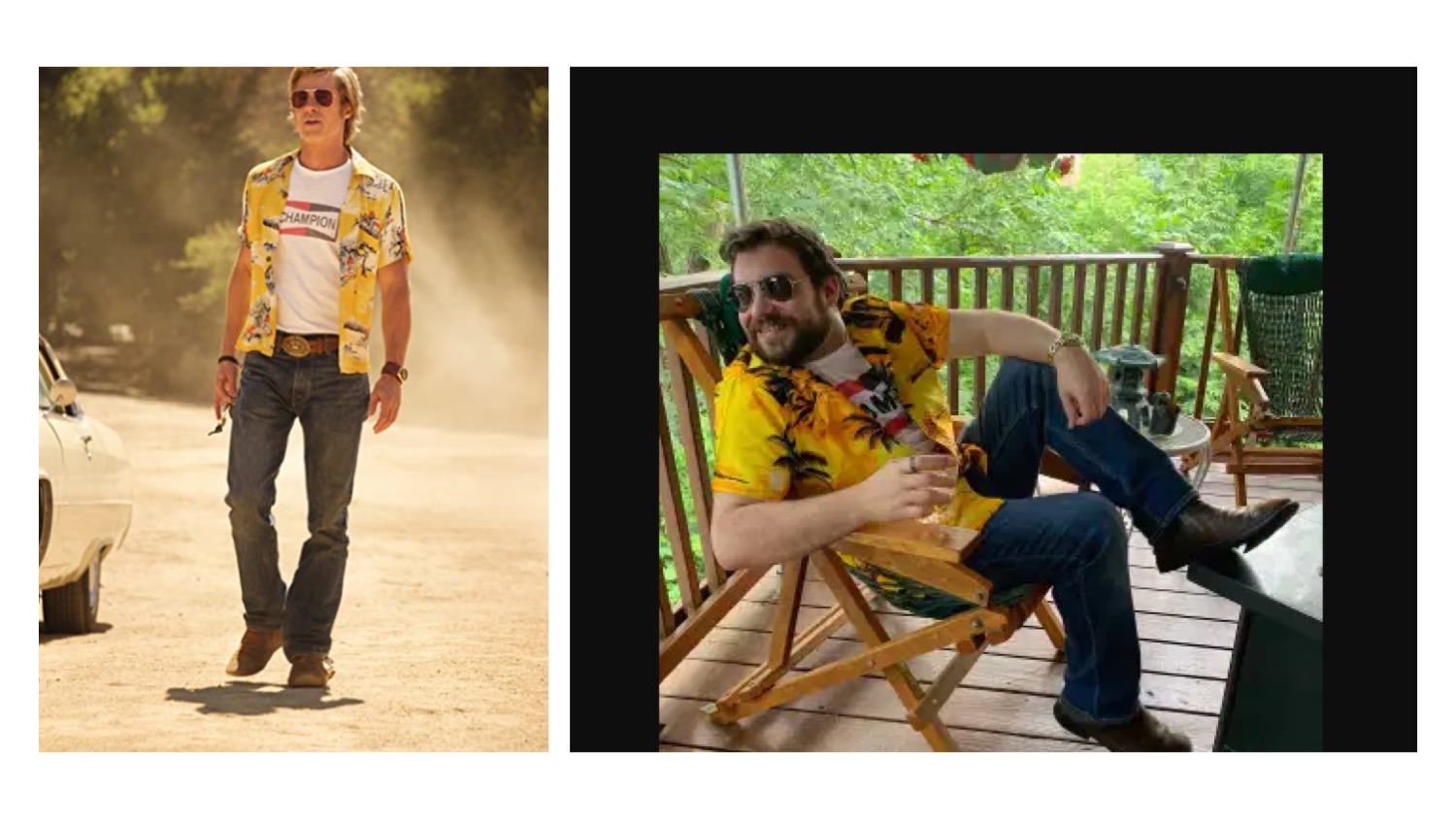 John being a Hollywood local were you familiar with the story and some of its locations? Did they do any filming by you?

I live three blocks behind Musso and Frank and being able to walk home from Musso and Frank is a dangerous thing. Yeah I have stumbled out of there. I mean, you know that that locations been in so many films; Ocean’s 11 where ‘you think we need more?’ I mean, that bar has been in everything. Michael Madsen talks about how he got into a fight there with tourney where they were, you know, they he Lauren’s tourney, the big guy, the bald guy from Reservoir Dogs, called the cops evidently from Busan, Frank said there’s a fight down here. And the cops showed up and he started a fight with the cops.

That’s smooth, so imprint that that movie. I mean, that bar has been in everything that’s, you know, Michael Madsen talks about how he got into a fight there with Lawrence Tierney the big guy, the bald guy from Reservoir Dogs, called the cops evidently from Musso and Frank, said there’s a fight down here. And the cops showed up and he started a fight with the cops. There’s this rich history, so anything Cinerama Dome, Chilli John’s, like all of that stuff. El Coyote worst food ever. The places you go to when you first moved to Hollywood. So it was just like a love letter. 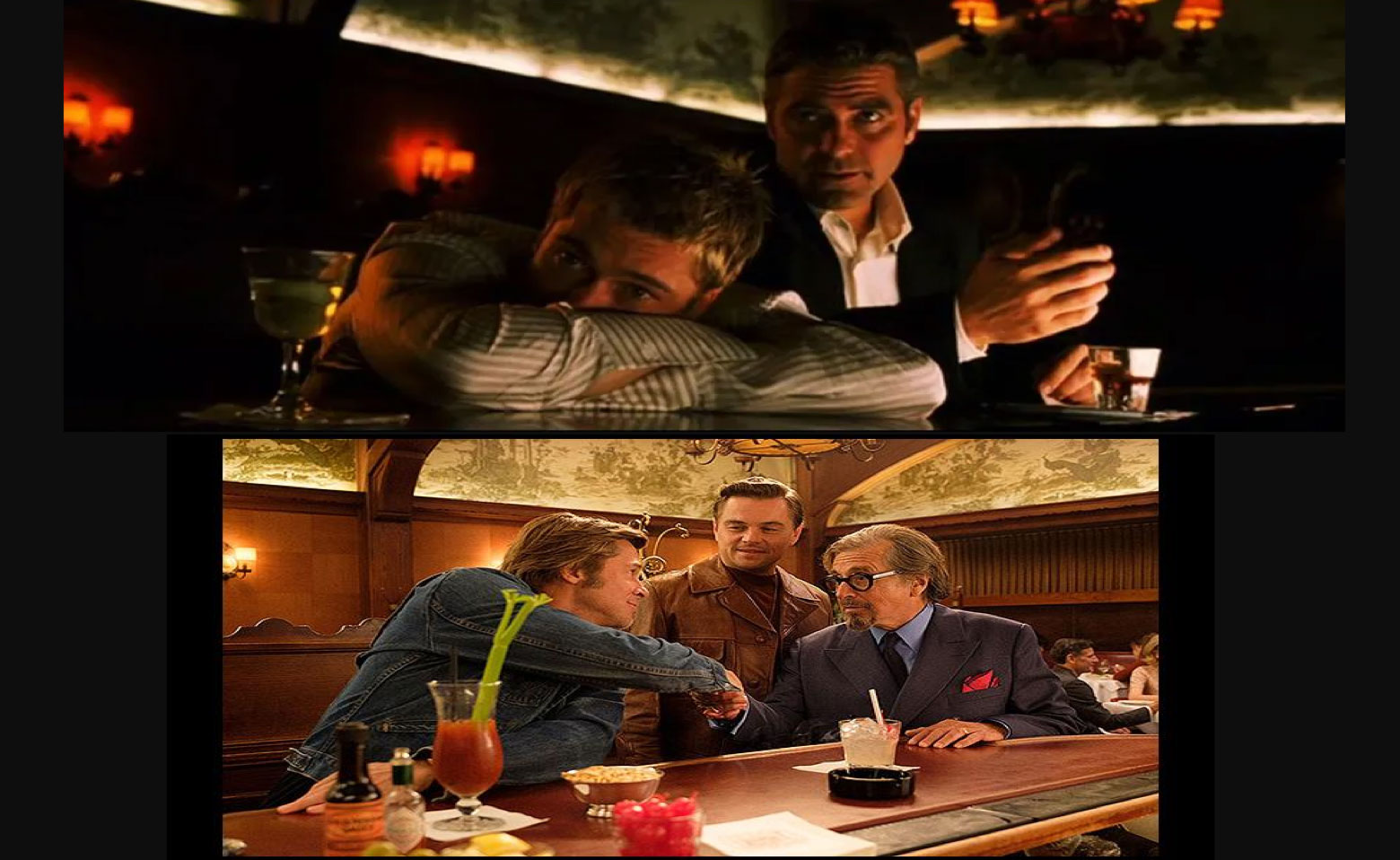 Nick you got the boots also right?

I was really curious about the boots that the Cliff wears, you know that this Minnetonka boots. I did go with a pair they were reissuing them because of the popularity in the movie and I was going between the soft sole and the hard ones like do I go with the screen accurate, soft sole and it’s like, you know not I’m not a tough guy. Like I went with the hard so I figured that was better for wearing them out and they are extremely comfortable. 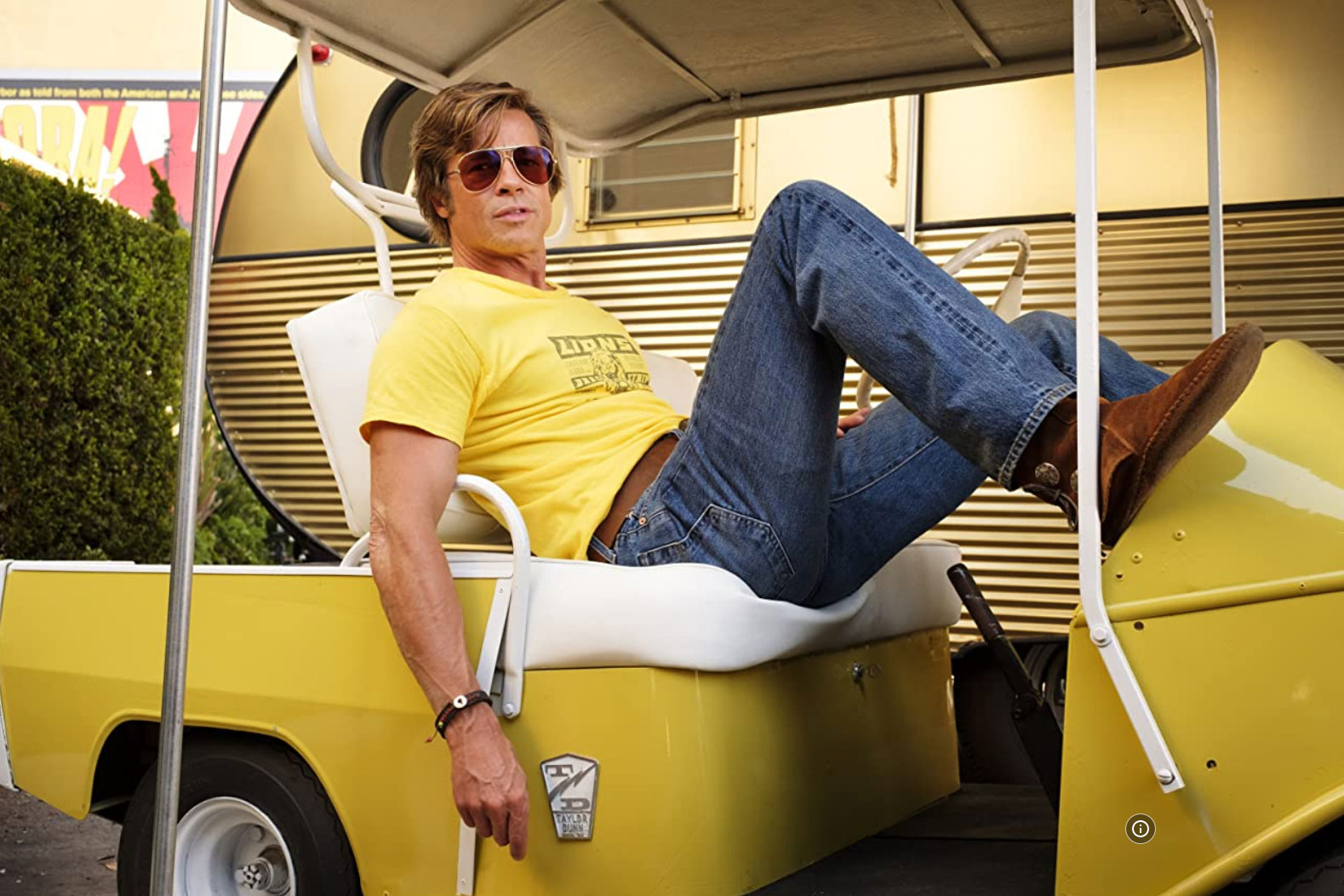 I had a friend who would pick stuff out for me, like purple Western shirts and crazy shit. You know, you’re going out at night – and some if your guy friends aren’t making fun of you when a girl doesn’t tell me how great that shirt is you’re not doing your job. So when I see these vintage pieces, it just kind of reminds me it’s a very Los Angeles thing. I mean, they’re everywhere. And you really got to move with intent. I can’t you know, it’s makes me crazy.

John, I’m really anxious to get into some of the locations of this. We touched about it. But were you around for the filming as well? Did you see any of this going on?

He transformed Hollywood Boulevard. What Quentin did was amazing. I am curious to know how much money he spent. I mean, because he really did, take this one stretch of road and turn it into 1969. So it’s when you were driving down the street, you would see it and everyone in town knew Tarantino was filming. It’s just really cool to see that immortalised. I moved to LA because I’m a huge fan of film. And there’s such an endowment for film here.

And they have all these tonnes of revival houses in revival cinemas where you get to see older movies Tarantino owns quite a few of them; New Beverly, American Cinema Tech and whatnot. So I get a kick out of that and locations. The biggest being the Cinerama Dome, the big dome movie theatre that they show towards the end when they’re turning on all the lights. I mean, that was my theatre. That’s where I went to all the Bond opening night, Star Wars opening nights ahead, my row, the whole thing. 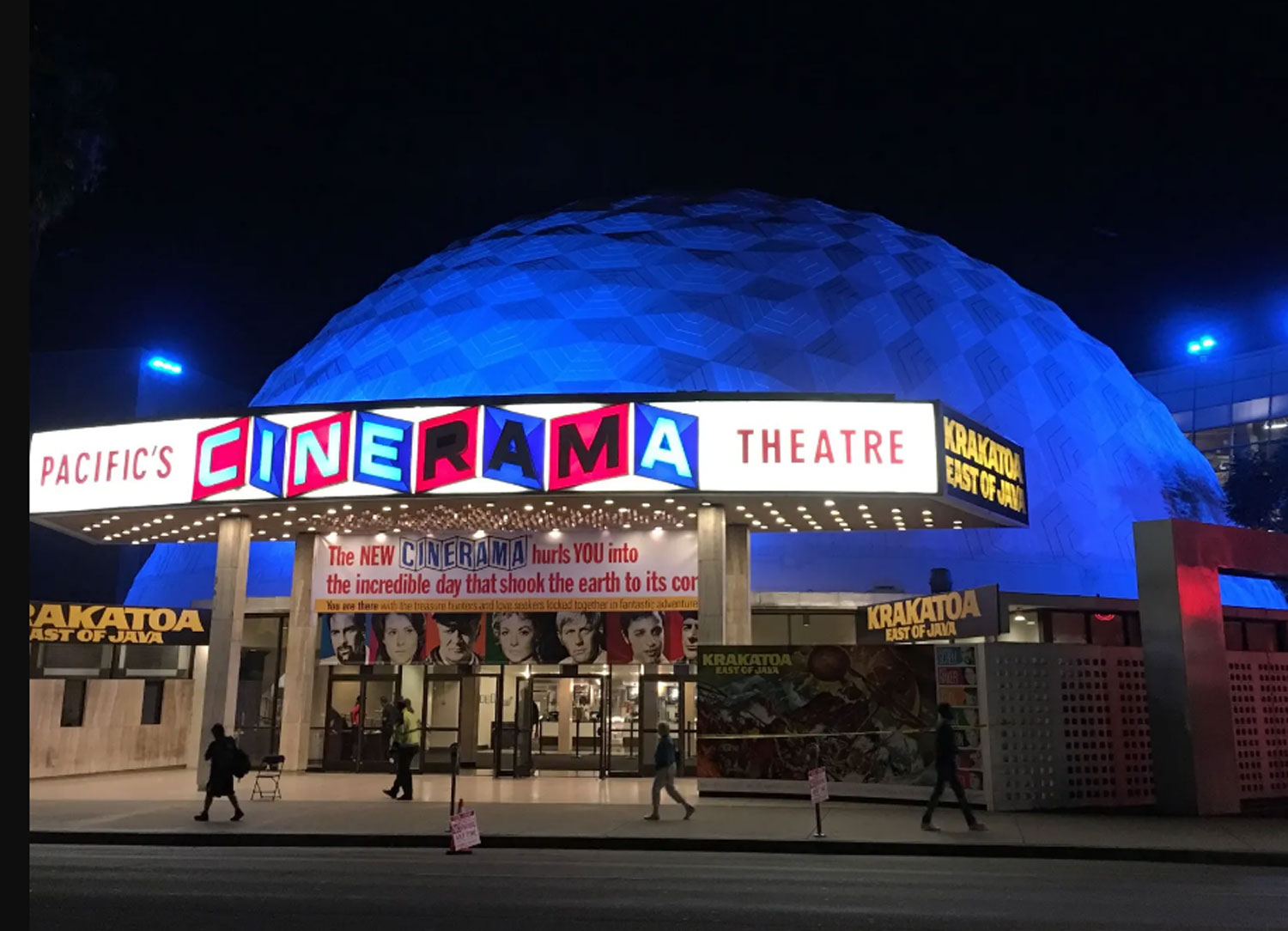 Oh, again, they painted it to look like 1969 and they left it in a lot of the shops on Hollywood Boulevard, when they transformed it for the film, they left it. They didn’t say please turn it back to crap. We’ll leave it. If you were to go down that street right now you can see it and see what they did.

Once Upon a Time in Hollywood is available on Blu Ray. Next on my reading list, albeit a bit grim, Charles Manson: Coming Down Fast by Simon Wells.