Steve McQueen made Clint Eastwood look hysterical someone once wrote.

What is it about The Cooler King in The Great Escape from 1963 that makes the character so memorable? I’m not going to go into detail about his clothes because that’s been done ad infinitum and I don’t want to repeat what has been written many, many times. 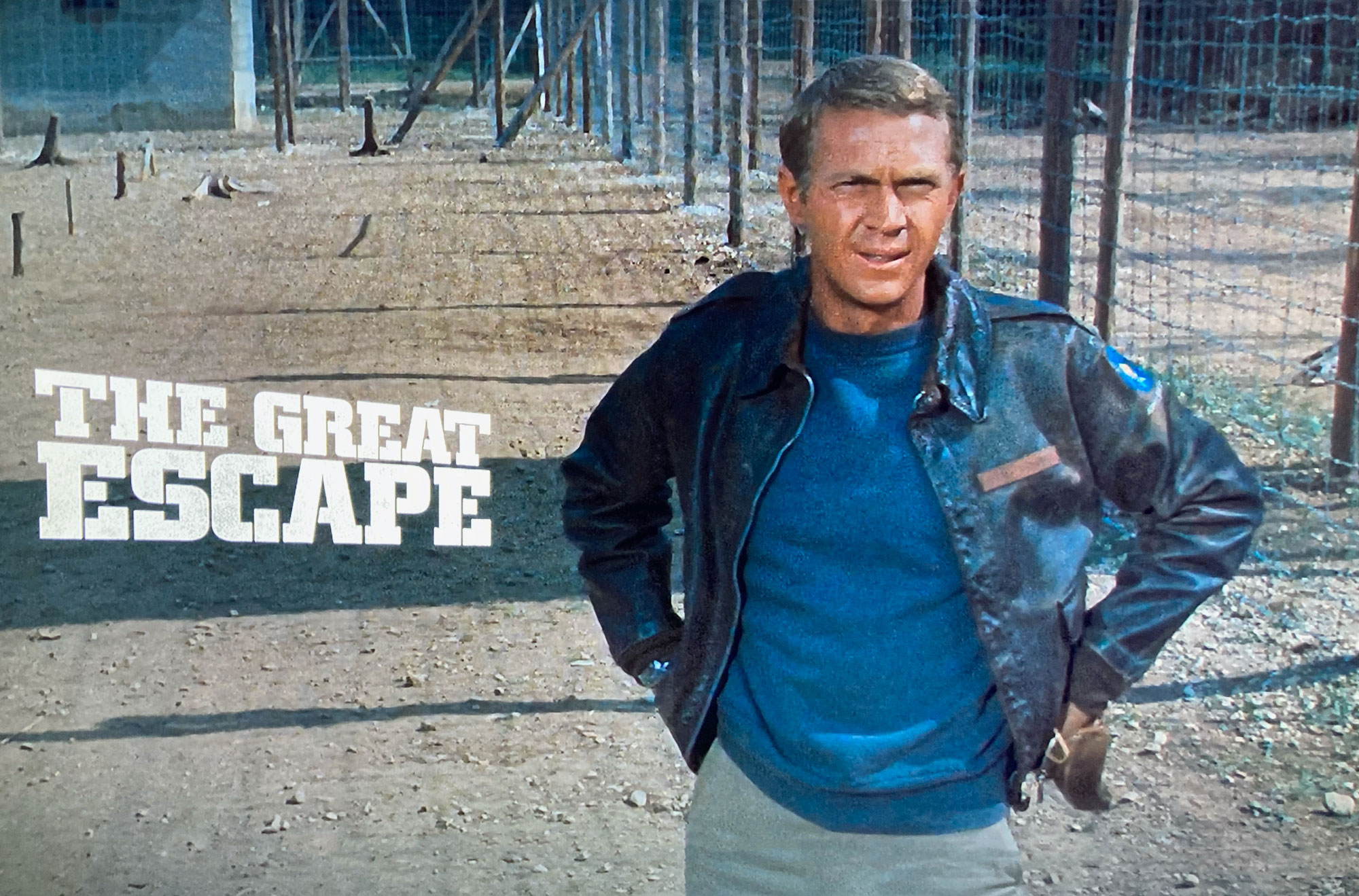 McQueen as a captured pilot of the United States Army Air Force (USAAF) looks like he’s wearing standard issue uniform but on closer inspection it differs slightly from the standard issue “summer uniform”. His A2 leather jacket fits him too perfectly. His chinos look too slim and well fitted to be from WW2. Plus they look ecru.

Apart from naval uniforms what military uniform is such a shade? Certainly not fighter pilot issue.

His cap toe rough out boots look too pristine. Underneath his jacket he is wearing an oversized t-shirt that I’d argue is the greatest single item of menswear to originate from the US. Is there anyone on earth who doesn’t own several t shirts? 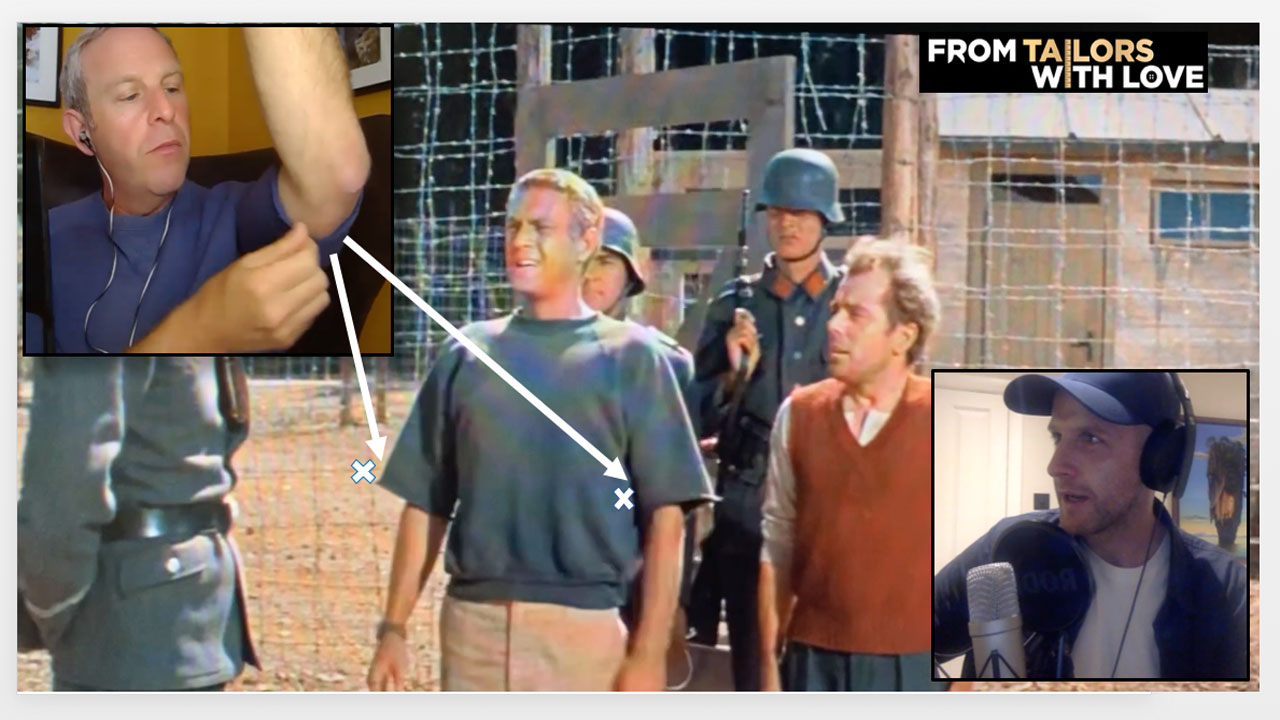 The actors also look remarkably well fed. The POWs on the potato and cabbage based diet certainly wouldn’t have looked so full of energy and strapping. I hate to think how the escape tunnels during excavation must have smelt. 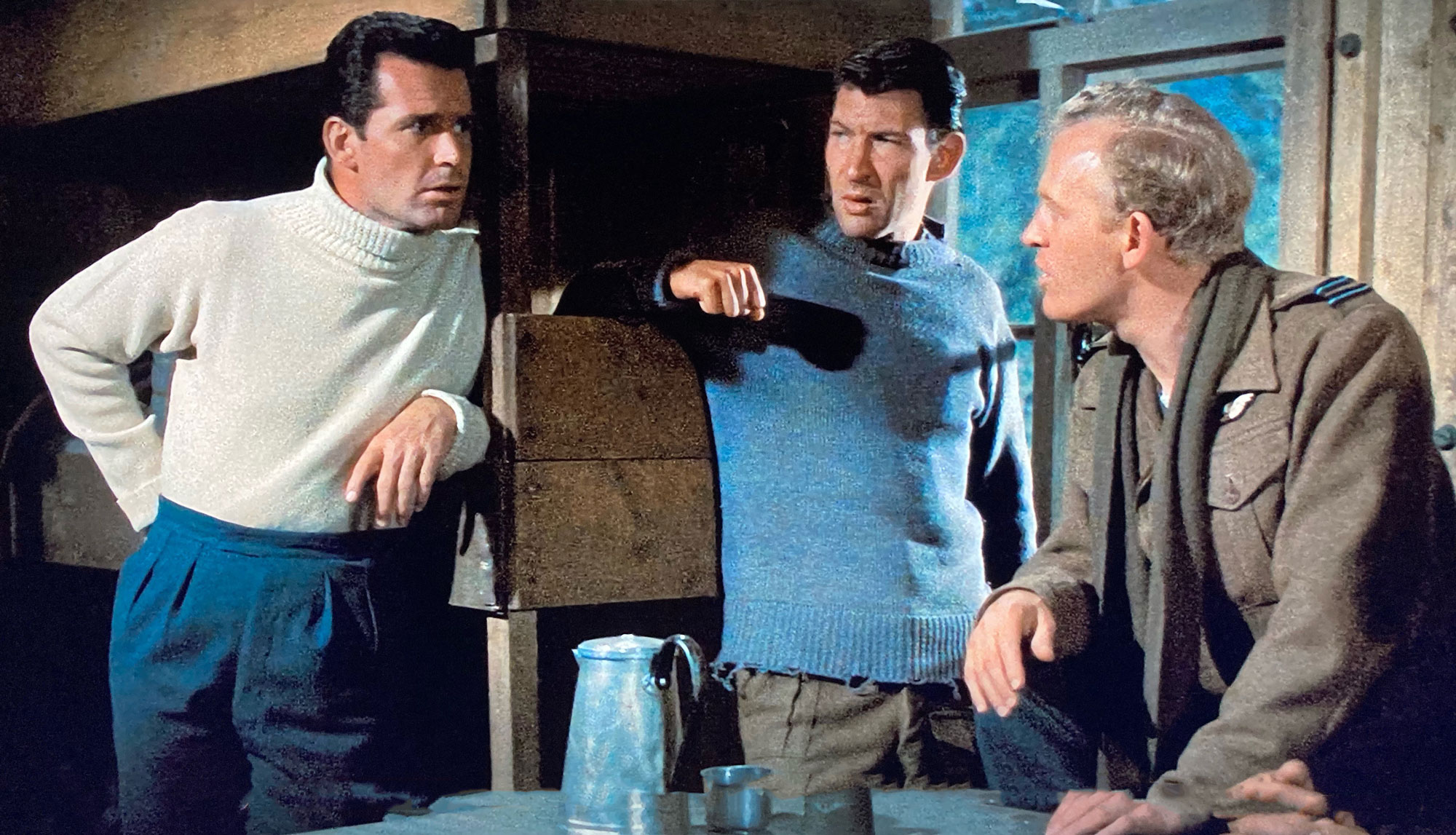 But I digress. McQueen always a rebel wanted to stand out even more then the other actors. He obviously wasn’t satisfied with his star role and top billing. He was very clever in realising that most of the cast were in boring standard issue uniform or dressed in patched up clothing to look like POWs. 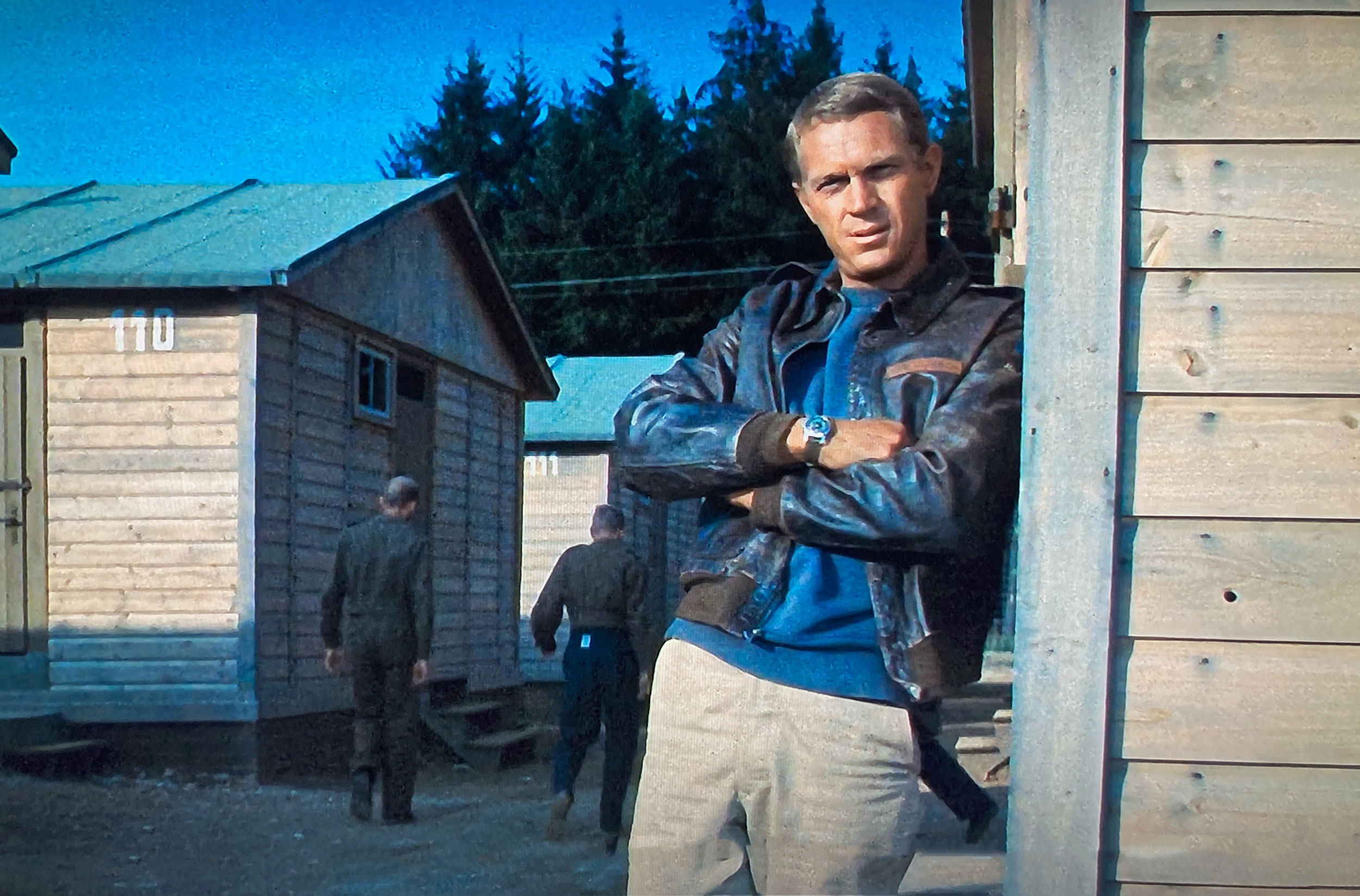 McQueen looks as if he has been watching the Yankees in the Bronx not stuck in a POW camp. His “uniform” screams Americana. It is American as juke boxes and a coke float. His “rebel uniform” marks him out from every other actor he shares screen time with.

They are either as stiff as ice on a Scottish Loch or dishevelled while he looks as if he’s spent the day doing what he loves best; playing ball with his friends. They are stereotypical British with all the centuries of the class structure and deference inherent in British society. 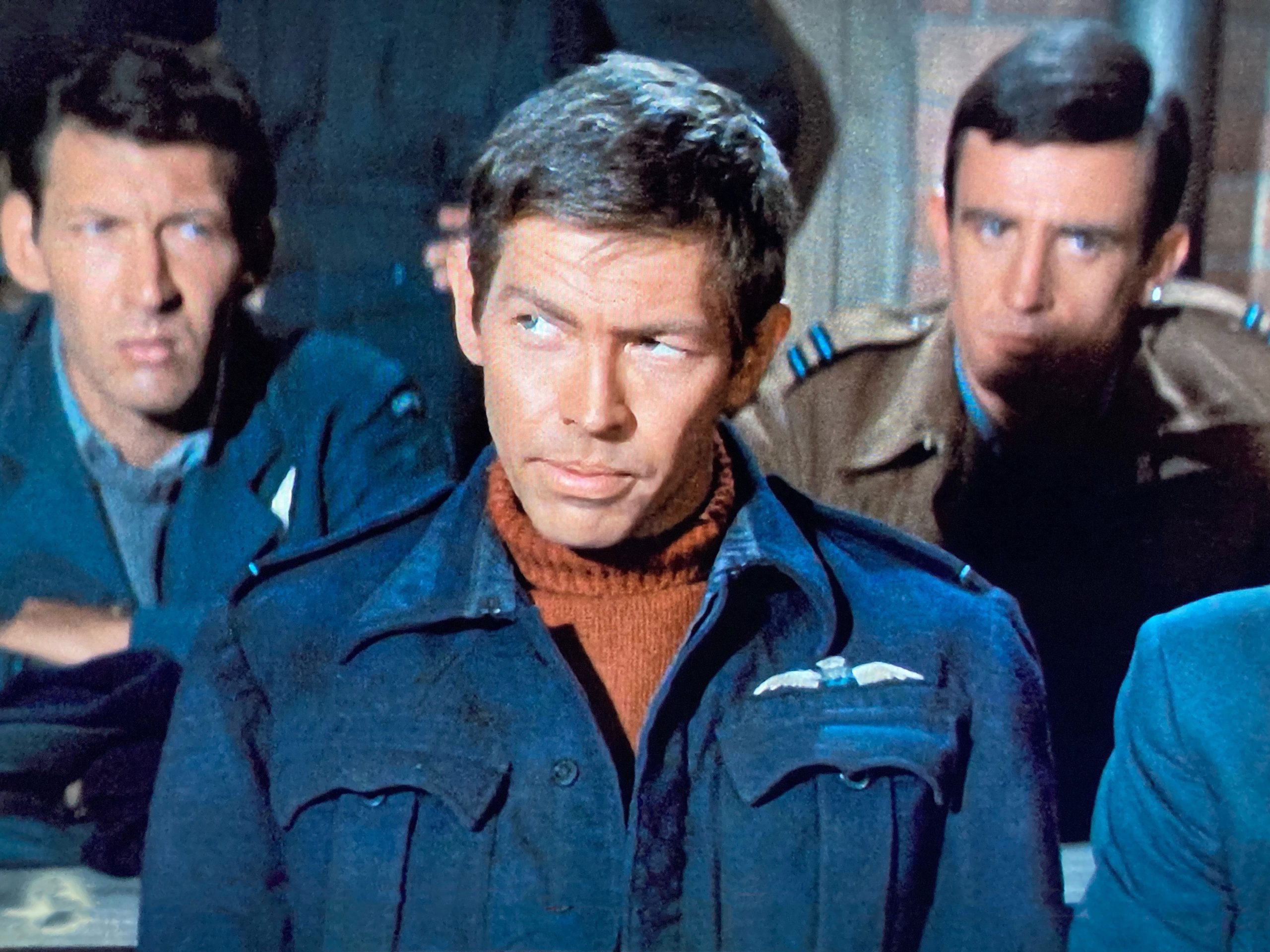 I don’t know if that was the intention but watching the movie after some 20 years that is what struck me. I apologise for the lack of wardrobe detail but as I stated I didn’t want a same-y blog post that goes into geek mode.

McQueen’s wardrobe may not be WW2 accurate but he realised that it didn’t have to be.

What mattered was how he projected the character of The Cooler King. In his case less was very definitively more. Now who else is humming Elmer Bernstein’s timeless score right now? 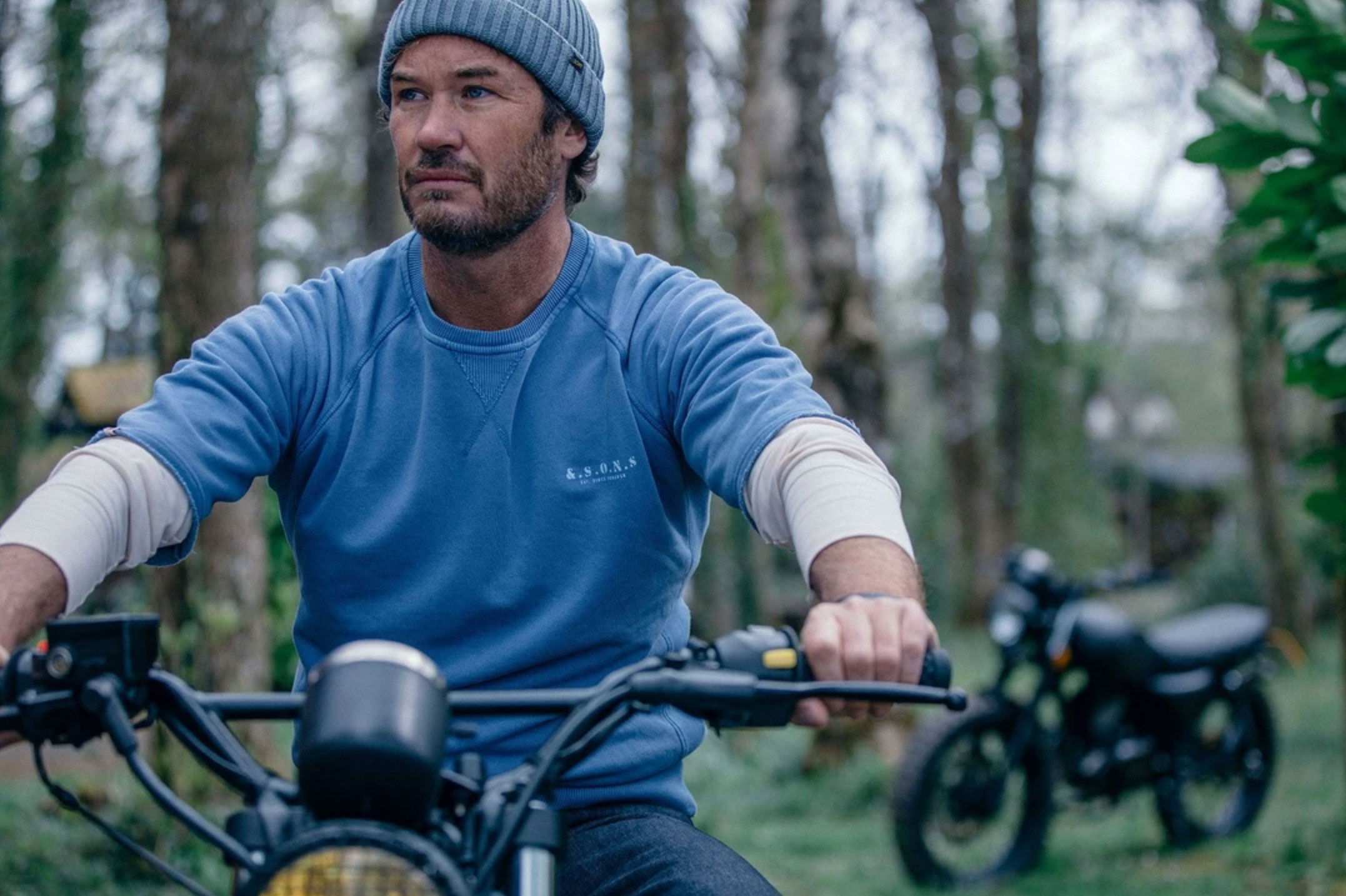 A modern take – the Escape Sweatshirt by AndSons

For this episode I speak more about The Cooler King and other impactful style moments in The Great Escape with David Zaritsky of The Bond Experience. The podcast is available to listen in the player below or on iTunes, Stitcher or Spotify. You can also catch our chat on YouTube.

Special thanks to Sajid from Niven Tailors for doing these show notes. More articles and inserts from Sajid can be found here. More importantly don’t forget to follow him on Instagram.

The Great Escape, based on the book of the same name by Paul Brickhill, is available on Blu-Ray. Next on my reading list is Steve McQueen: In His Own Words by Marshall Terrill that contains rare unseen photos.