‘Just get through the god damn day,’ George says. I think that was my mantra every day in my 20s whilst working construction. 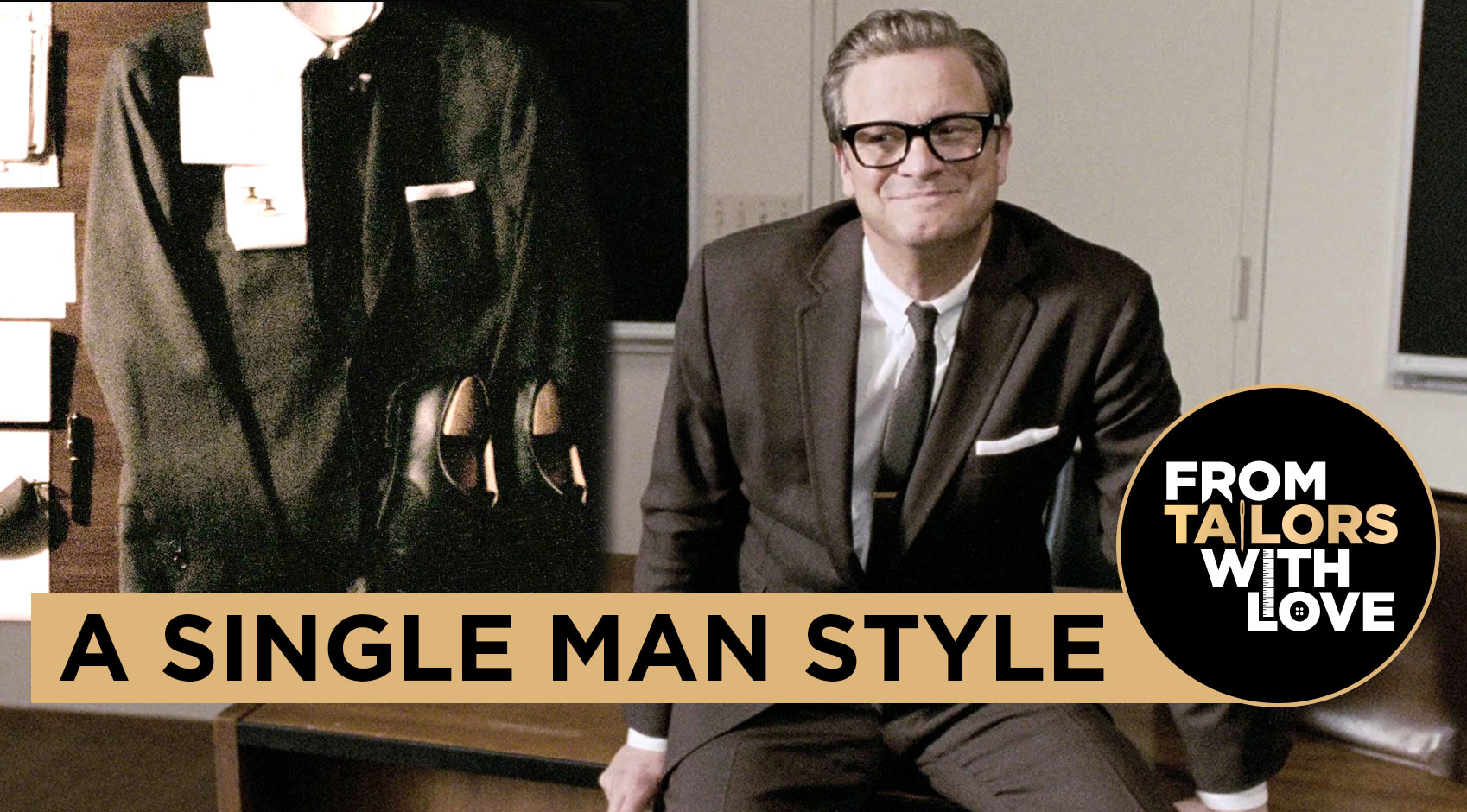 In episode #134 I speak to Matt Spaiser of Bond Suits and David Lowbridge Ellis from Licence to Queer about the style of A Single Man, directed by Tom Ford. The costume designer was Arianne Phillips who’s filmography includes, Once Upon a Time in Hollywood, Kingsman: The Secret Service and Walk the Line. The film was based on the novel A Single Man by Christopher Isherwood (1964)

Below are some moments transcribed from my chat with Matt and David. The podcast is available to listen on iTunes, Stitcher or Spotify or in the player below. You can also catch our chat on YouTube.

Matt how would you describe the suit?

It’s a very fresh suit for 1957 it looks more to me a suit from when the film takes place in the early 60s. It’s a very sporty suit, in a heavy brown herringbone fabric which makes it a sportier country style suit than a formal city suit. It makes the character more relaxed, it fits his profession.

It’s a two button suit with leather buttons and swelled edges on the lapels. The lapels are very narrow which was very different for Tom Ford at this time. I think this suit would be a precursor to what Daniel Craig would go on to wear in Skyfall, with the narrow lapels and short single vent. Gently slanted pockets with narrow flaps. One thing that stood out to me that didn’t go with the 60s thing was the trouser had a flat front. 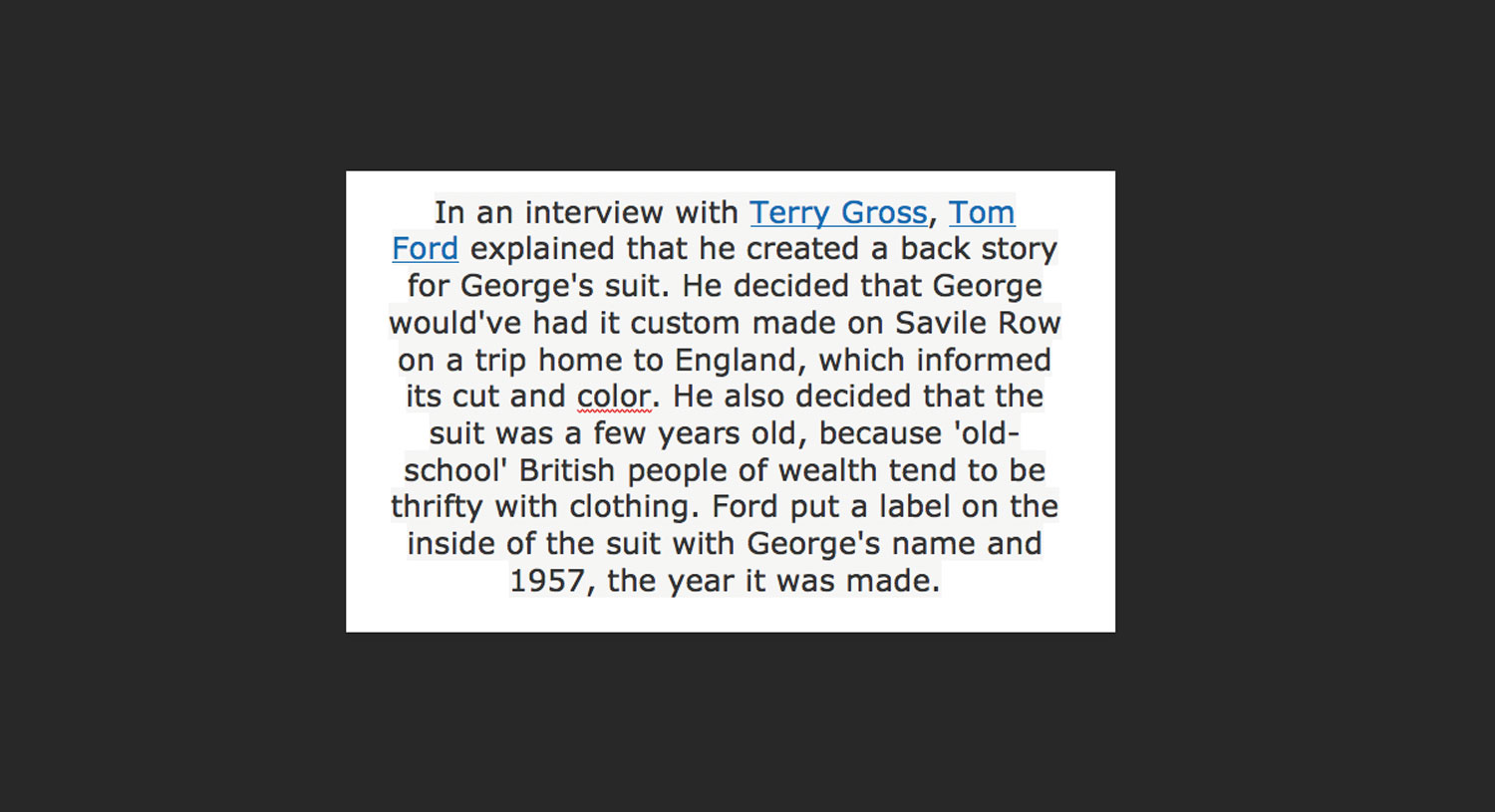 Most Savile Row trousers from this time would have double forward pleats. American suits would have more likely had flat fronts at this time, but the flat front goes against the story behind this suit. But it makes him look more fashionable for when the time was made. The shirt with tab collar, we’d see that in Skyfall but it started here. 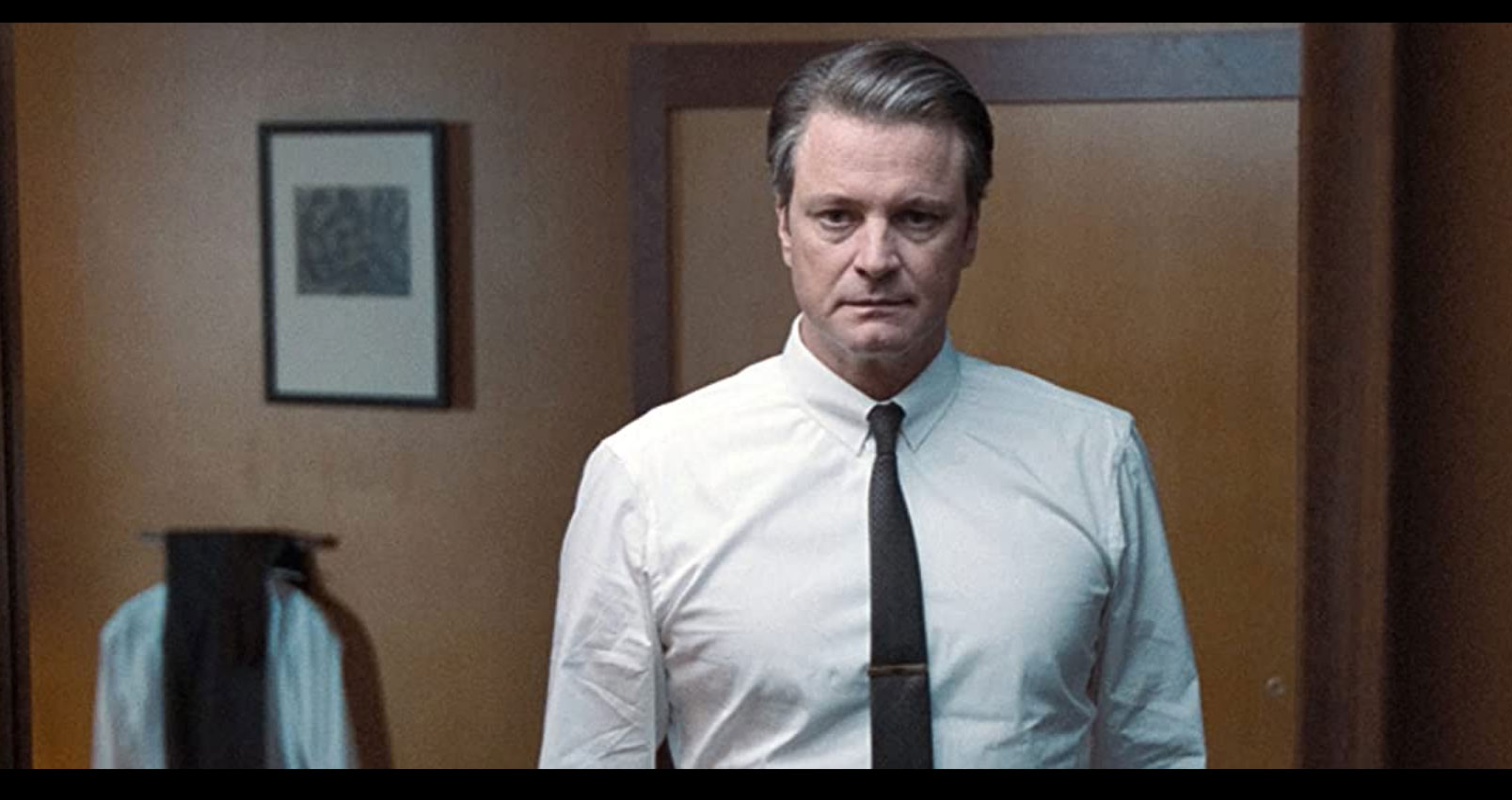 David you’ve read the book, are there any major differences from the book to the film?

The book is quite interior, its really about whats going on in his head and thats so hard to do on film, but thats the best thing about the film. once you put it into prose it doesn’t sound as poetic anymore. it follows the same story, there are certain things in the film, I.e the younger student seducing him or vica versa, thats different. Virtually the same but more interior. In the film its obvious he has died at the end, it is less obvious in the book. Isherwood says that every day could be your last, so enjoy yourself. 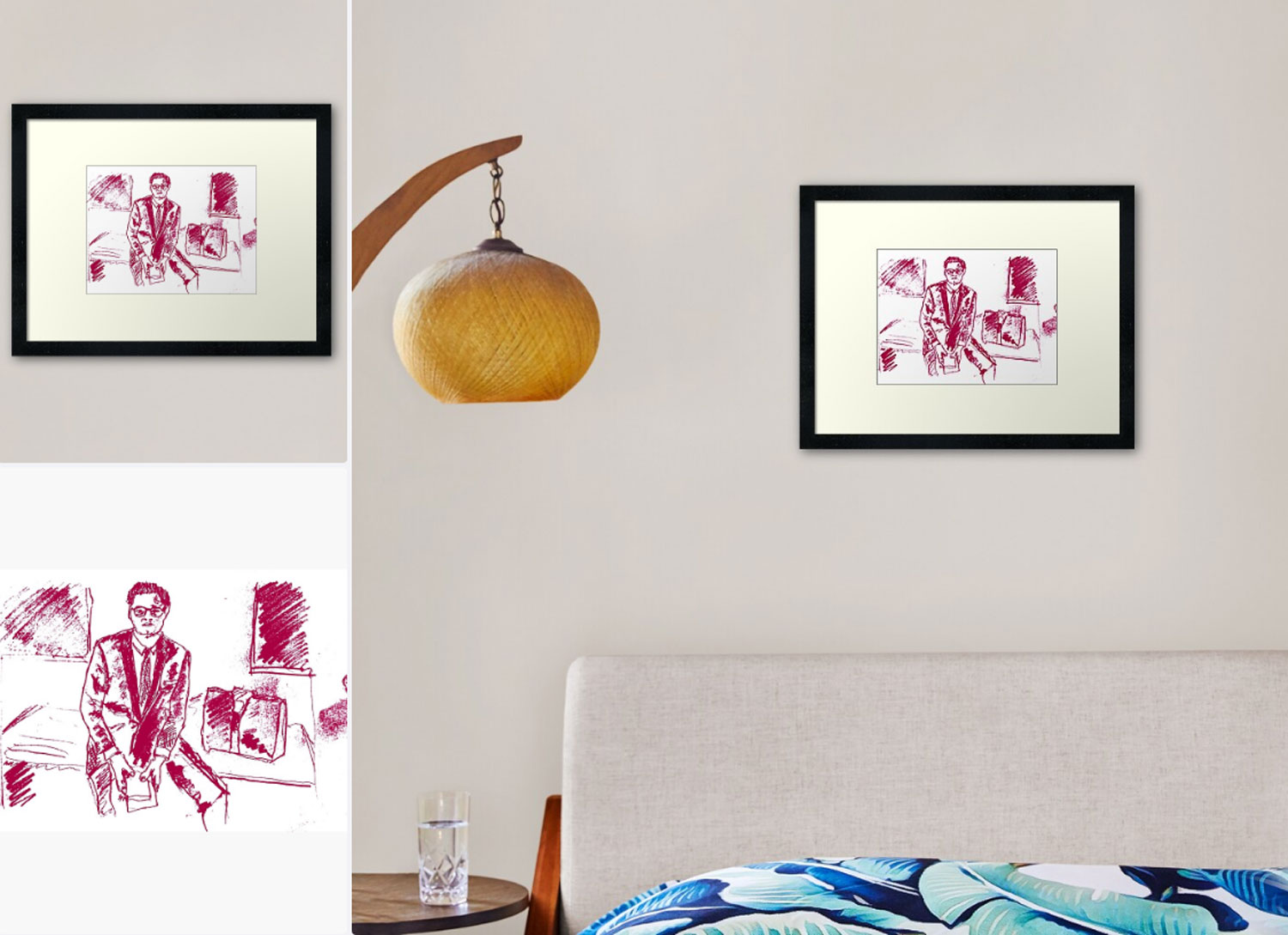 Feel free to support the show by buying some original fan ‘art’ of Colin Firth in A Single Man on our Redbubble page. Check out the shop part of the blog to see more merch.

My extremely rough notes whilst watching A Single Man:

I loved the opening scene of him getting ready. I think any scene that shows a characters morning routine informs us of what kind of person he is. Notice the clocks ticking audibly and the saturated colours. It’s a very dull world George has. Waiting almost.

When he loses his partner, George doesn’t get to say goodbye. He’s not invited to the service despite being in a relationship for 16 years. Even one of the dogs is now missing presumed dead like the other one. It’s many layers of agony. That phone call, the one where he finds out his partner has passed, empties him.

I love the scene of him running to Julianne Moore in the rain, this is really Tom Ford. The rain is louder than his sobs. We have the following scene which is also silent as he takes a dump and looks on his childhood in a flashback. Matt this is how I imagine you on the toilet in your shirt and tie.

George is now living out his final day. He has decided to kill himself and this is freeing for him. He is kind to the cleaner, and this is the first time we know he is a good person. He is not dismissive of cleaners or looks down on anyone. Despite being elite and well educated. He is not a snob.

Slow tracking shot on his way to work, playing finger guns with his neighbours kids. I love this shot.

Strings are lilting has a feel like its serenading his last day. The score by Abel Korzeniowski is sublime. The child at the bank brings the first real colour. In a baby blue dress holding a scorpion.

But everything since and even after has a muddy brown colour. The panelled desks at the bank then the gun range, earthy tones, the car interiors chocolate leather seats.

The scene where he meets the guy in the white t shirt. When he meets others that lighten George’s world there is colour. The pink fog, the red coca cola fridge. George is now enjoying his last day, he has an unfiltered honesty and freedom about him. 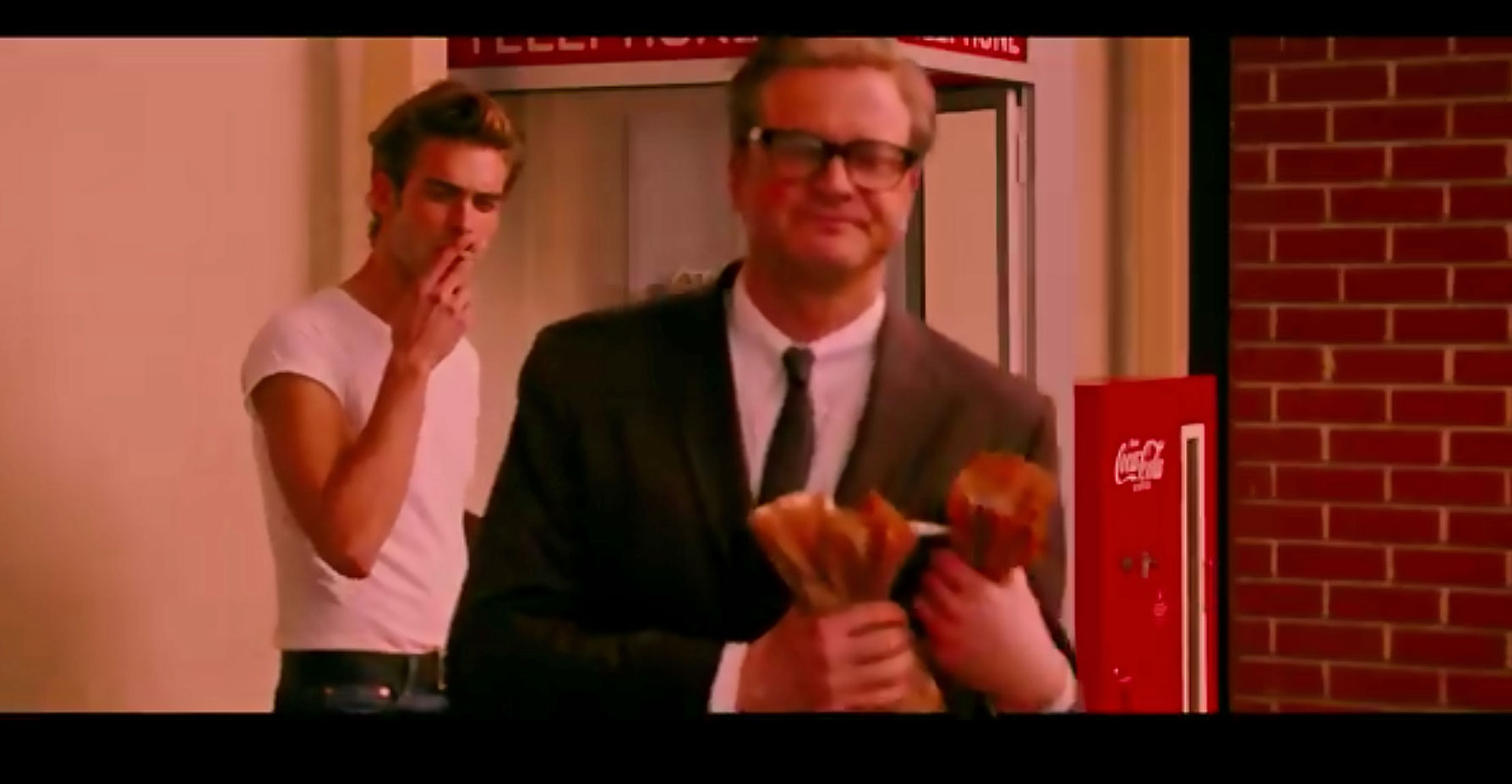 Some of the flashbacks are now in colour, which is good, too much black and white would be too on the nose and fatiguing. The suit preparation is great, lying the suit out, tie in a Windsor knot the note says,

We see a new suit when he visits Charlie at night gold buttons on his jacket. He is going to elegant with Charlie, her place is elegant and rich, but she like him is broken, and hanging on by a thread.

There is a subtext of nihilism through all the characters not just George, set on the backdrop of the Cuban missile crisis, everyone has this last day on earth vibe. 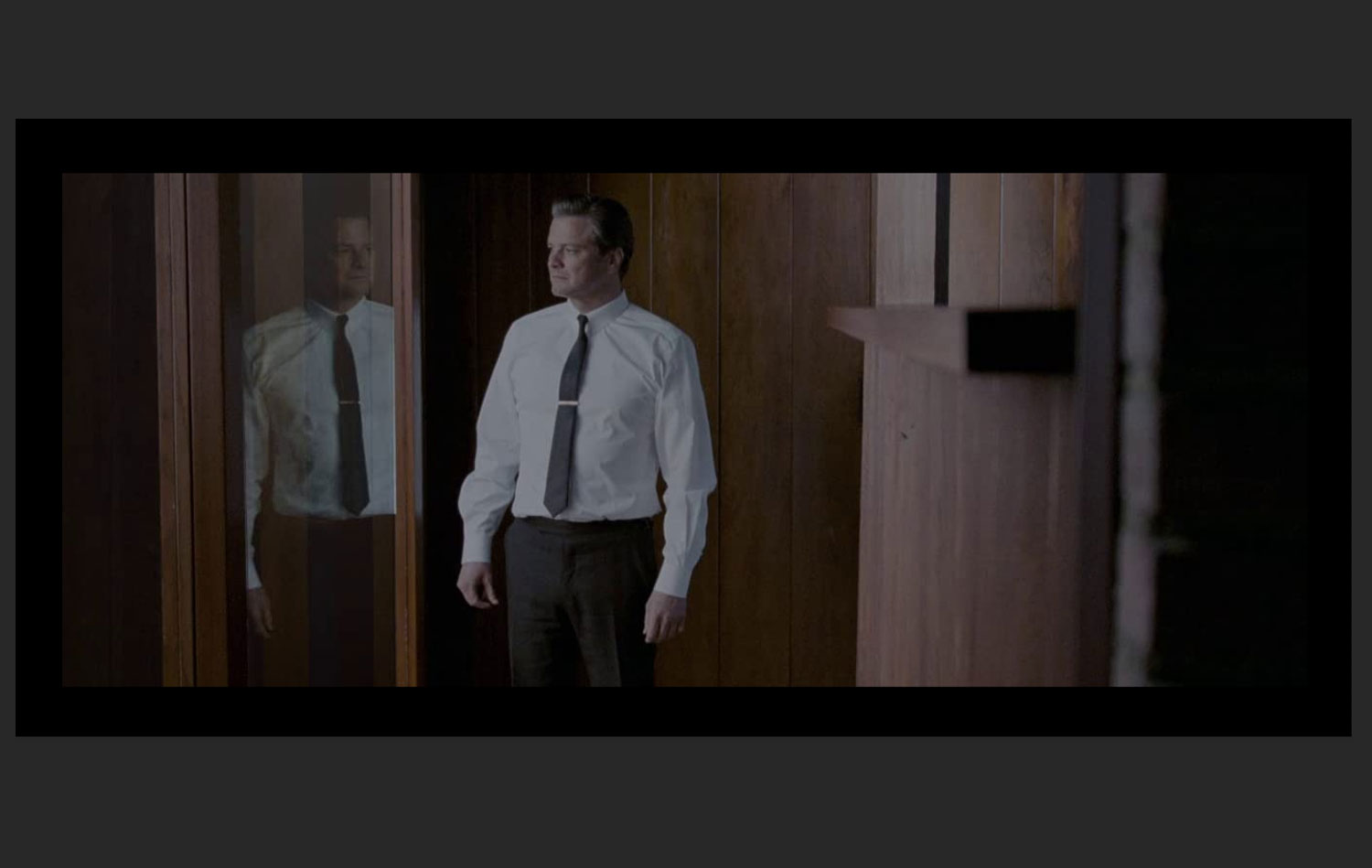 ‘Just get through the god damn day.’ Colin Firth as George in @TOMFORD’s A Single Man, (2009) also available on @PrimeVideo in the U.K. pic.twitter.com/E4ERpNZkMG

All screen grabs from A Single Man either sourced from the movie itself or from various places on the internet, used here under the fair use doctrine. With thanks to Matt Spaiser of Bond Suits and David Lowbridge Ellis from Licence to Queer.

Learn about the rise of Tom Ford in films in a previous article here.

Buy the movie on Blu Ray