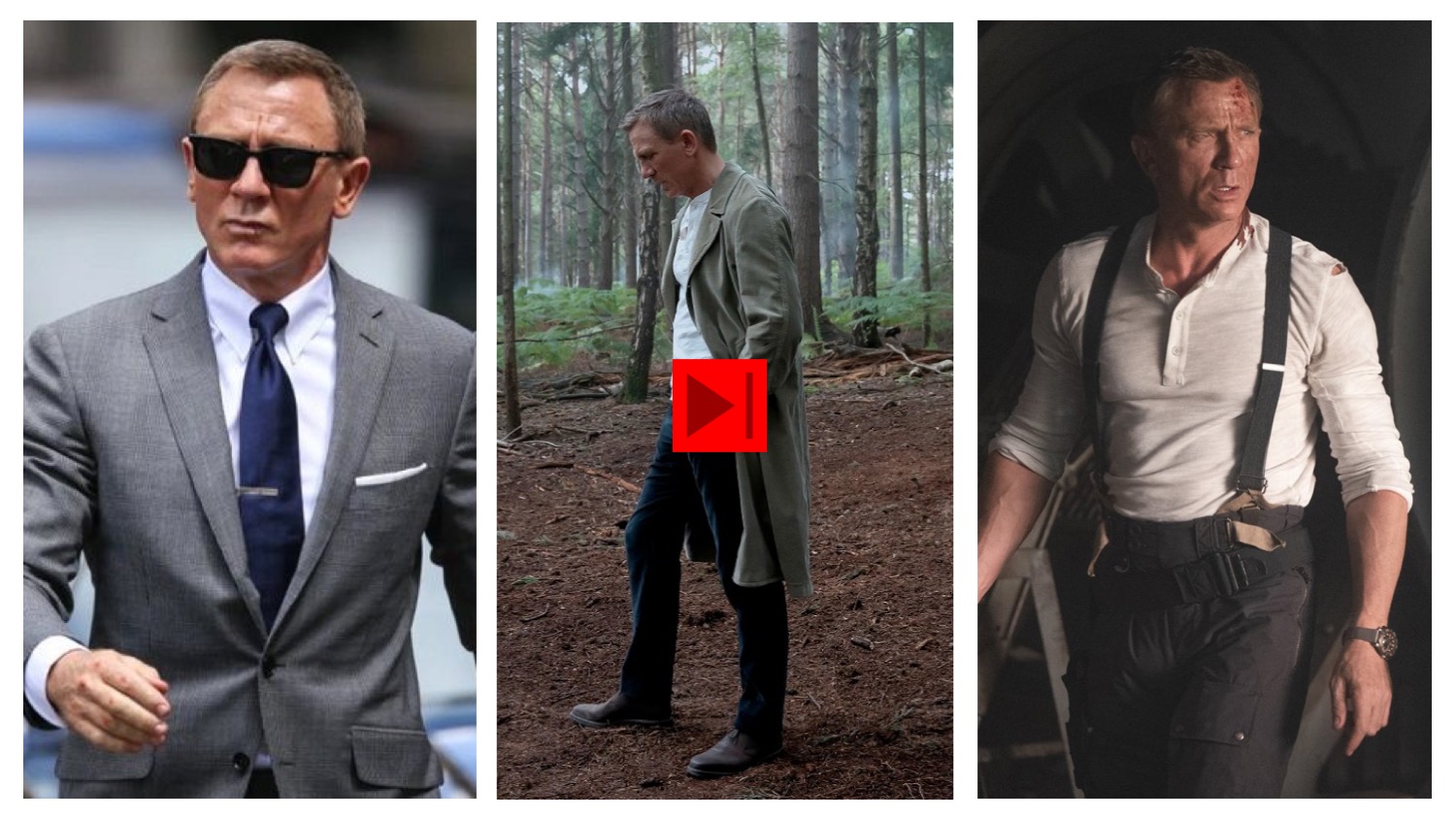 Today we’re having a Style Discussion about No Time to Die , having seen the film. So now we can see the clothes in context of their surroundings, what worked what didn’t work. I have Matt Spaiser from Bond Suits, Z From Tie Another Day and Daniel Gaster joining me.

The podcast is available to listen on iTunes, Stitcher or Spotify or in the player below. You can also catch our Style Discussion on YouTube. Below are some moments transcribed from the interview. (Coming Soon).

PB (Me): What did you think of the suits?

Z (Tie Another Day): Well, certainly the navy blue, which I think is a really lovely fabric. I’ve seen it in real life. I think that’s got a lot more screen time. That tie that goes with the suit is a mystery. I mean, we were limited only those two suits. not discounting the Matera. Certainly the suits and material the Massimo Alba suits sits very well with environment. I felt the suit felt more comfortable of the environment and it matched the palette off it. But certainly debit to Tom Ford suit. Yeah, I think you could say there were London suits, I think they’re very, I would say conservative. I mean, I think the palette and pattern you know, I’m fan of the Prince Wales check. So I really think they really came across pretty well.

PB: How do we know is not a Tom Ford tie?

Z: It could be a Tom Ford tie but maybe it’s not that it wasn’t included inside the collection that was being provided. 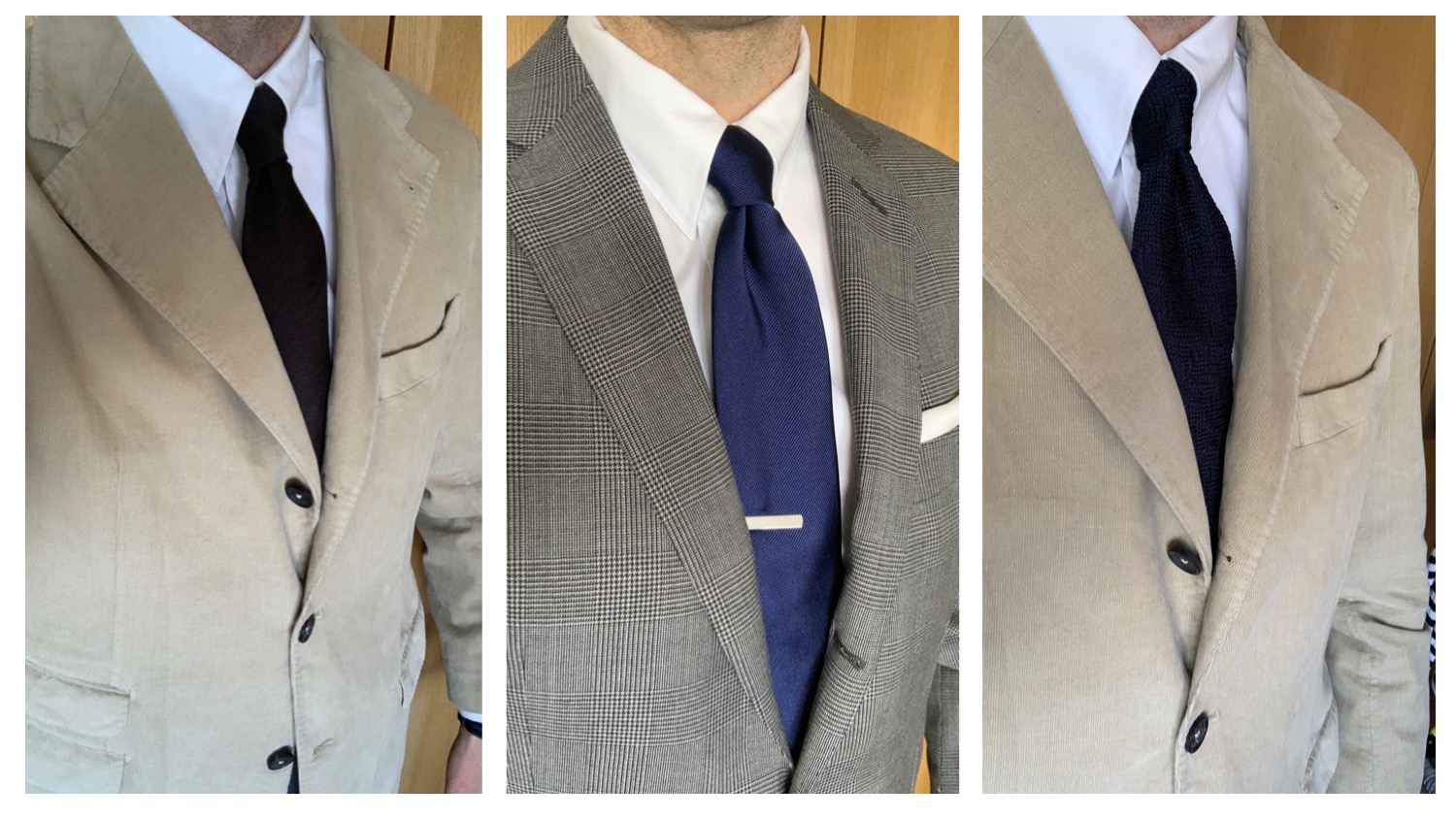 PB: Is this one of the only items that hasn’t been revealed?

Z: And the baseball cap, I think maybe it’s from Barbour because it’s got a kind of a very unique Navy look to it’s not a washed version.

The book From Tailors With Love: An Evolution of Menswear Through the Bond Films is available to buy on Amazon. It’s written by myself and Matt Spaiser and includes the costumes of No Time To Die. The book is now available in colour as an EBOOK, in addition to the B&W hardcover and softcover versions.

PB: Daniel, what were your favourite style moments that really stood out.

Gaster: I think for me I actually really liked the Norway outfits the Massimo Alba Duster Jacket. I think when once you see the film, it does belong to that environment. It works well with the Connolly shirt. So that’s probably one of my favourite outfits other than the Tom Ford suits, which I love anyway.

PB: Yeah, I did like the scene that’s in the trailer where you see the Massimo Alba Duster jacket flap in the wind as the Aston Martin creeps up behind him. He’s walking around like Clint Eastwood in Pale Rider, it kind of gives it that great fluidity. You had a good point on your blog about how that jacket could have also maybe been a Barbour jacket, the one that we see in Skyfall.

Spaiser: Yeah, I definitely think that the Barbour jacket from Skyfall would have been perfect for those scenes as well. I mean, it’s nice that we see a different item here but I think we do see a number of familiar looks in No Time to Die from the previous Bond films. that was something that Suttirat said that she had gone back and looked at previous films to give some continuity, which I think is a fantastic choice. But I really do actually like the green Duster coat. I think it really makes the scenes in the forest more dramatic. But I do think that whatever he wore, I think green was the best choice for that because it’s camouflage.

There is an interesting story on the shorts told by Matt Jones, co-founder of Hemingsworth that I included in an episode of the FTWL podcast, Walk Around the Block – That Whole Made in England Thing. I have transcribed the text in the review of the clipper shorts which you can find here. 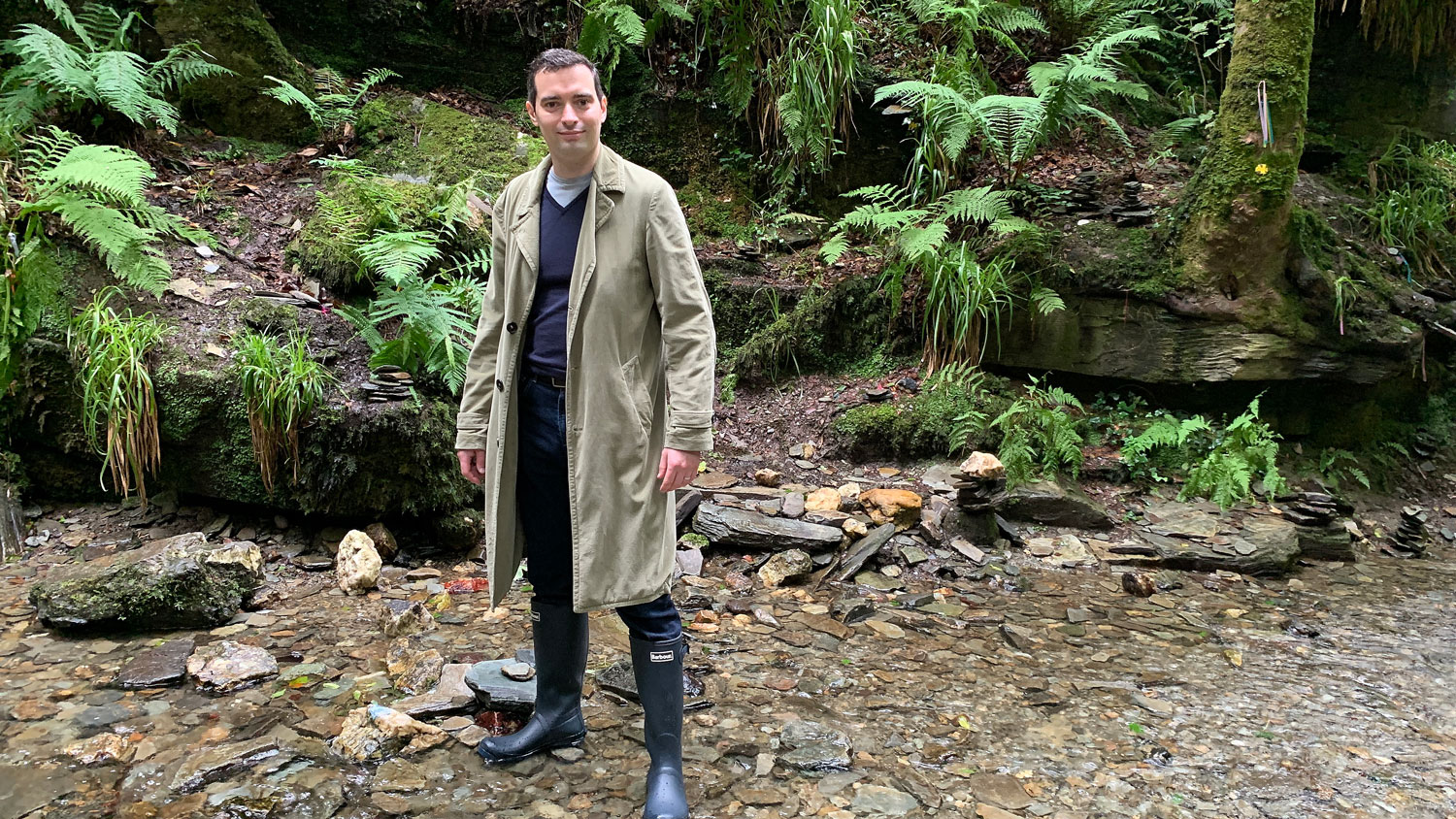 PB: I think Barbara Broccoli even spoke about this in the 007 podcasts that he uses clothes as a conduit to get into places he doesn’t treat clothes like we treat clothes, carefully and with love and affection.

Spaiser: Bond doesn’t have that sentimental attachment to his clothes […] I have family members who have held on to clothes for decades. They don’t care about them. They don’t give a shit about their clothes, but they have them just lots of people just hold on to their old clothes, they wear them until they can no longer wear them whether they gain too much weight or the clothes wear out. That’s something that I think of when I see the grey t shirt in the Jamaica scenes. I mean, is it supposed to be Orlebar Brown? Is it supposed to be the grey Sunspel t-shirt from Casino Royale? He’s clearly had this shirt for many, many years.

PB: We’ve got a sustainable Bond on our hands.

Spaiser: Yeah. It’s realistic, whether or not you care about your clothes. Most people hold on to their clothes. It’s actually people who care so much about the clothes are the ones who generally throw them out. Maybe Bond would just keep wearing the same thing because he has it he can he can wear it. Why not just practical.

PB: But Bond has a naval background. A military background. Would he look slovenly? Wouldn’t he be someone that would always want to look immaculate?

Z: It’s an interesting question. Because I do work a few Vets (veterans) and the veterans really do keep a very high level of standards. You know, shoes had a mirror shine, there was always a sense of routine. You have a certain look that you feel accustomed to. But I do take your point.

On the Blamo! Podcast Suttirat Ann Larlab referenced this and said, (loosely transcribed).

[…] where are we, in his psychological story when we first meet him?  If you see that he’s kind of turned his back on his previous life, in terms of clothing and a ratty old t shirt and swim trunks, no shoes on, right? You know, it says something more than if you just heard him say, I’ve turned my back on my career. But he’s in a really lovely linen suit or something? It doesn’t. Right? So I’m looking for those moments, to try and say that the clothing choices for this character, which are still instinctual to this character, are extensions of the behaviour that is trying to be expressed in there and also give not too much, and not too little. So that Daniel who’s a consummate actor can do what he needs to do in those clothes.

PB: Daniel what do you think Bond wears when he washes his car? (Joking) You pretty much got nearly every outfit from this film, right? Is there anything that you haven’t got from this film yet?

Gaster: I don’t have the evening suit. No, I don’t have the RGT jacket and I don’t have the Connolly jacket either. It wasn’t for me, personally, I wasn’t drawn to those items. The Connelly jacket, it just didn’t appeal to me. The Rogue Territory  jacket has a similar feel to the Matchless jacket from Spectre which I do own. 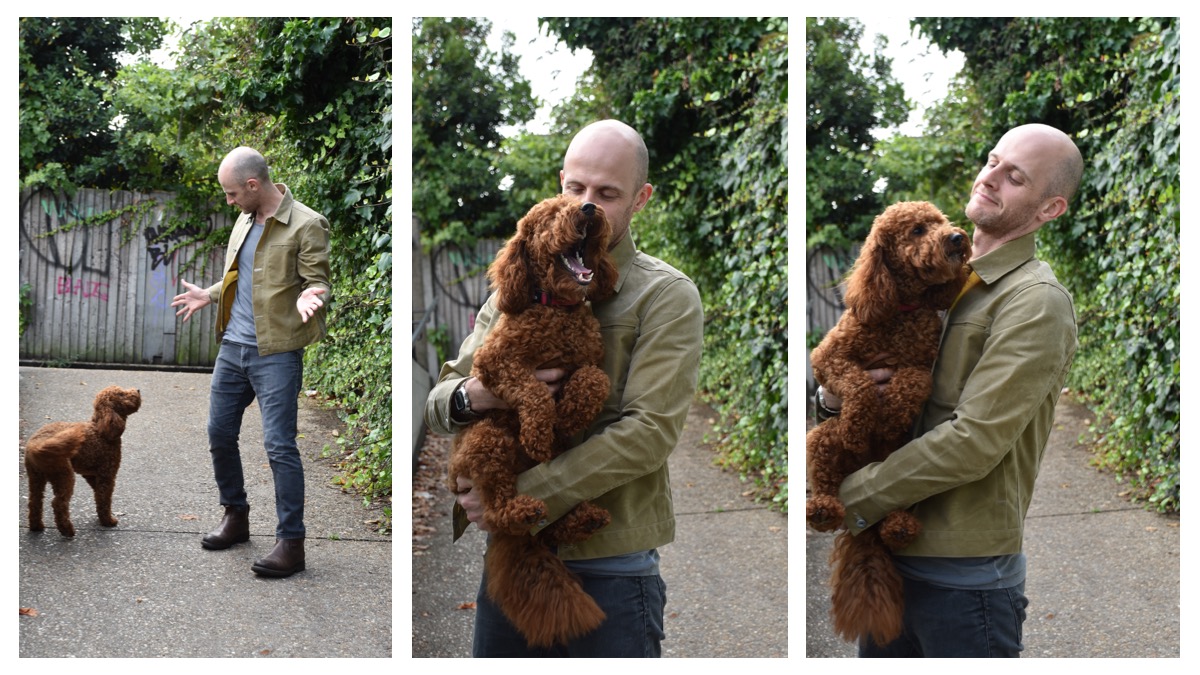 Me wearing the Rogue Territory jacket from No Time to Die

Spaiser:  The RGT Jacket might be the most popular item from the film, especially as it’s the most accessible. It’s under $300 and it’s made in the US it’s made you know very high quality standards. I think it works for Bond and it works for the average person. It’s a great piece. I was just very surprised that we don’t see very much of it in the film. There aren’t a whole lot of costume changes. Like in Casino Royale. I can’t keep track of when every time there’s a new costume on screen.

Spaiser: It’s very similar to what we saw in Skyfall and in Spectre but they don’t feel quite as tight anymore. They look a little more relaxed. I mean, it’s still a very close fit. But they don’t seem like they’re strangling him. But the thing that I really noticed was that the collar of the jackets does not sit flush against the neck. It’s 10 cents away. And it’s a very common issue with ready to wear, it’s not a difficult alteration. But it’s something that we see a lot of in this film, and I did find it very distracting. Especially with the blue suit. Whenever there’s a close up, you see it. On the big IMAX screen. It really stands out.

PB:  Z were you distracted at all?

Z:  So the colour choices were very good. Dan can say this as well, we’ve had a look at this fabric, it can be dark grey, on one side, in one light and in navy blue on another. This is a very unique fabric. So the way it came out on screen made it look blue, but then there could have been some filters or something like that to kind of enhance that as well. I think he definitely looked comfortable wearing those suits at those times. But I don’t know if we’ll ever get to the point where it will be like as flattering as it was in Quantum of Solace.

Gaster:  If I think about just the Tom Ford suits from the past four films, I would still say that the Quantum fit is probably the best. However, this is probably next in line in my opinion.

Spaiser:  One thing I noticed with the series that I kind of had a problem with was that there are two Tom Ford suits and they are both check suits. It would have been nice to have one check and one stripe or just a solid or a semi-solid. What do you guys think?

Z: I think I agree with you. It’d be nice to have either a stripe or just a plain suit to go with it. But I do really like these two suits. It’s just a shame that they’re so similar in the same film. Yeah.

Gaster:  I agree. I think maybe like a mini herringbone would have been very nice as well.

In interview with James King for the Official 007 James Bond podcast, Daniel Craig spoke about the costumes for No Time To Die,

Thanks to Matt Spaiser from Bond Suits, Z From Tie Another Day and Daniel Gaster for joining me on this Style Discussion.