Hannibal Lecter’s (Mads Mikkelsen) vinyl kill suit is first seen at the end of episode 10 when he is caught in the act of killing Dr. Sutcliffe by Georgia. Thanks to the Prop Store auction we know this custom made suit,

features Velcro on the cuffs and a zipper up the front of the suit. Various ventilation holes are present along the back and inner left thigh. 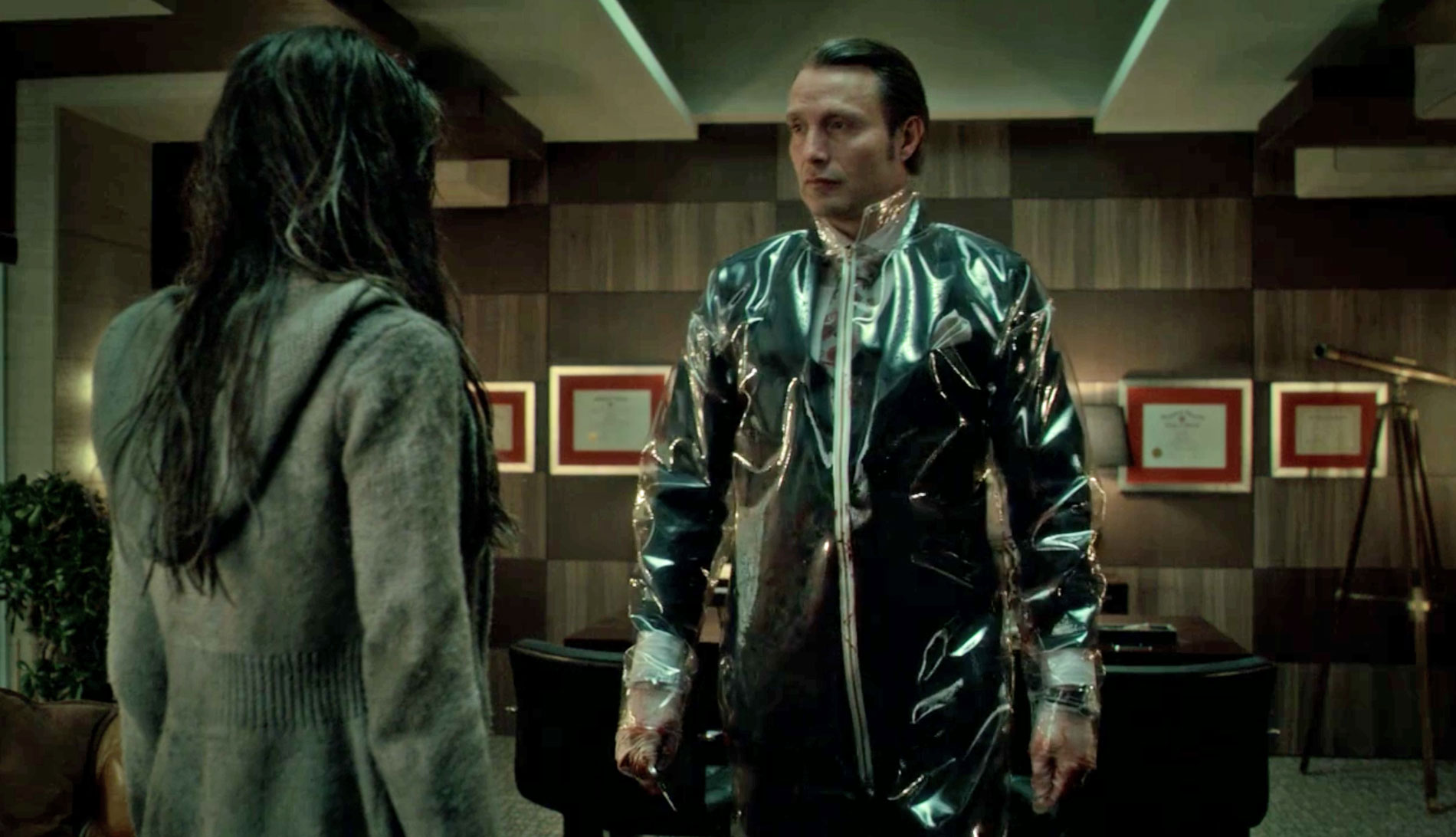 It does seem strange that a suit of this nature would come with any ventilation holes considering it’s purpose. Naturally one is reminded of a similar suit Christian Bale wore as Patrick Bateman in American Psycho. This one despite the ventilation is far more practical as it at leasts covers the shoes.

Christopher Hargadon spoke about this Kill Suit in our interview,

That was [done by] one of my tailors. A very good friend of mine, a Vietnamese gentlemen. I could give him the most bizarre projects and he would always figure out a way because it’s sewing plastic essentially. The challenge with that, and I loved it actually, there’s a shot of Mads standing in front of a wheat field before he climbs up the silo and his skin looks kind of luminous and just the reflections on the plastic. It really is one of my favourite shots from all the things I’ve ever done but he was sweating so badly in those plastic sleeves. I poked holes in the sort of appropriate places. The thing about him is he was such a consummate professional. He never ever complained. He literally would do anything for the for the project.

The iconic Bateman suit spawned many a halloween outfit and even a Funko Pop. Bateman’s vinyl kill suit barely sacrifices practicality for fashion. It has a natural boxy drape and the vinyl is matted with two large square patch pockets by the waist with white stud fastens on the pockets and placket.

Hannibal is wearing my favourite silk paisley tie beneath his kill suit, which is not surprising. Hannibal knew Dr. Sutcliffe well and it would make sense that he would be wearing his normal suits when in his company, and then possibly dressing in the kill suit to mutilate him. Hannibal’s vinyl kill suit will feature again in Season 2, although I have not watched it yet. The suit sold for $600 at auction. 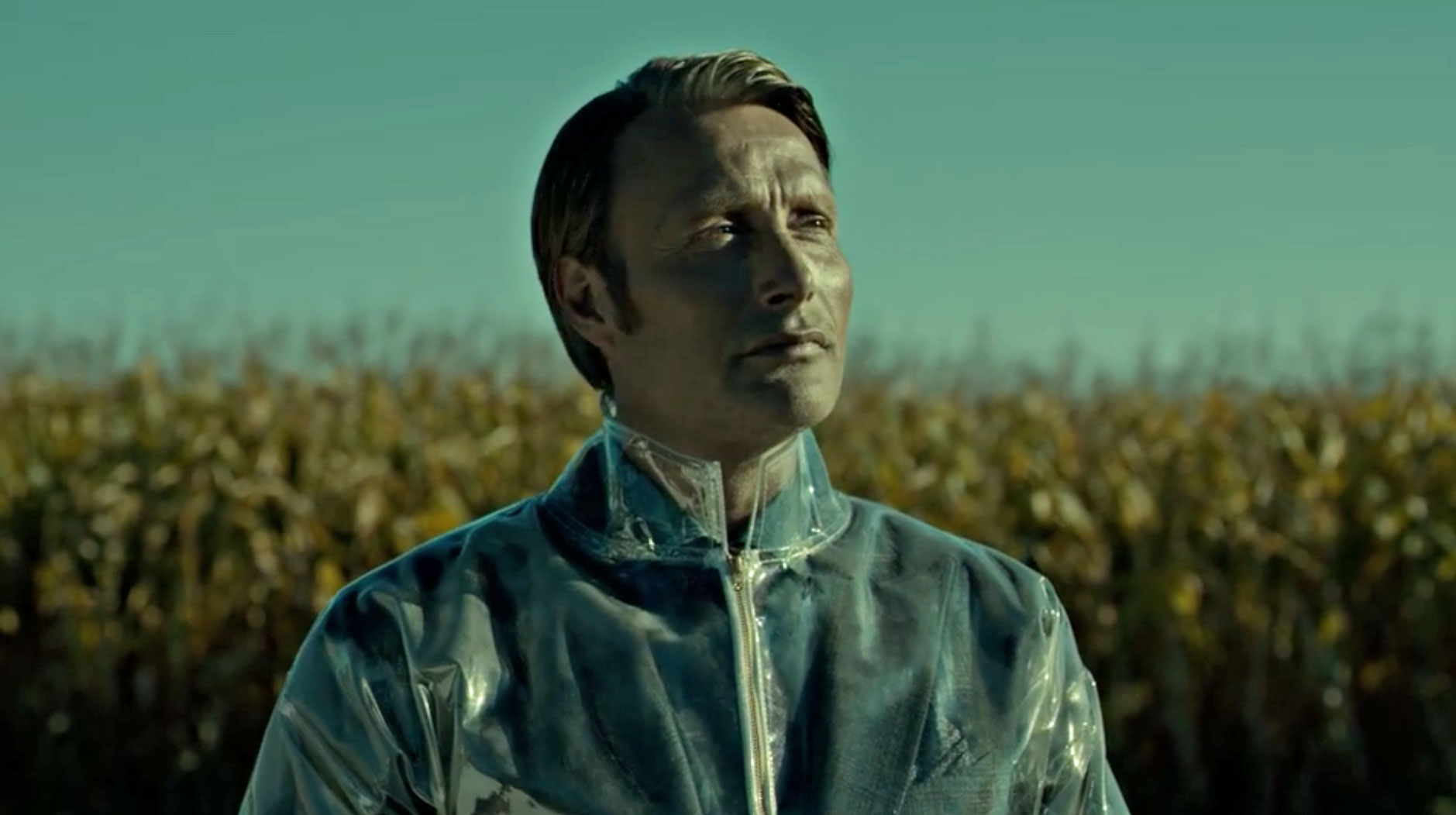 The suit has a nehru collar and is extremely form fitting. You can see in the photo below from episode 2 in Season 2, that it’s not just a boxy drab vinyl suit that Hannibal has bought off the rack. This would have been tailor made for Hannibal (in his universe). You can see on the back of the suit that there is a long white piping strip that runs down the centre back, and a strip that runs across the centre back just above the seat. This has been inserted into the garment so that the vinyl can be gathered to make it a closer fit. 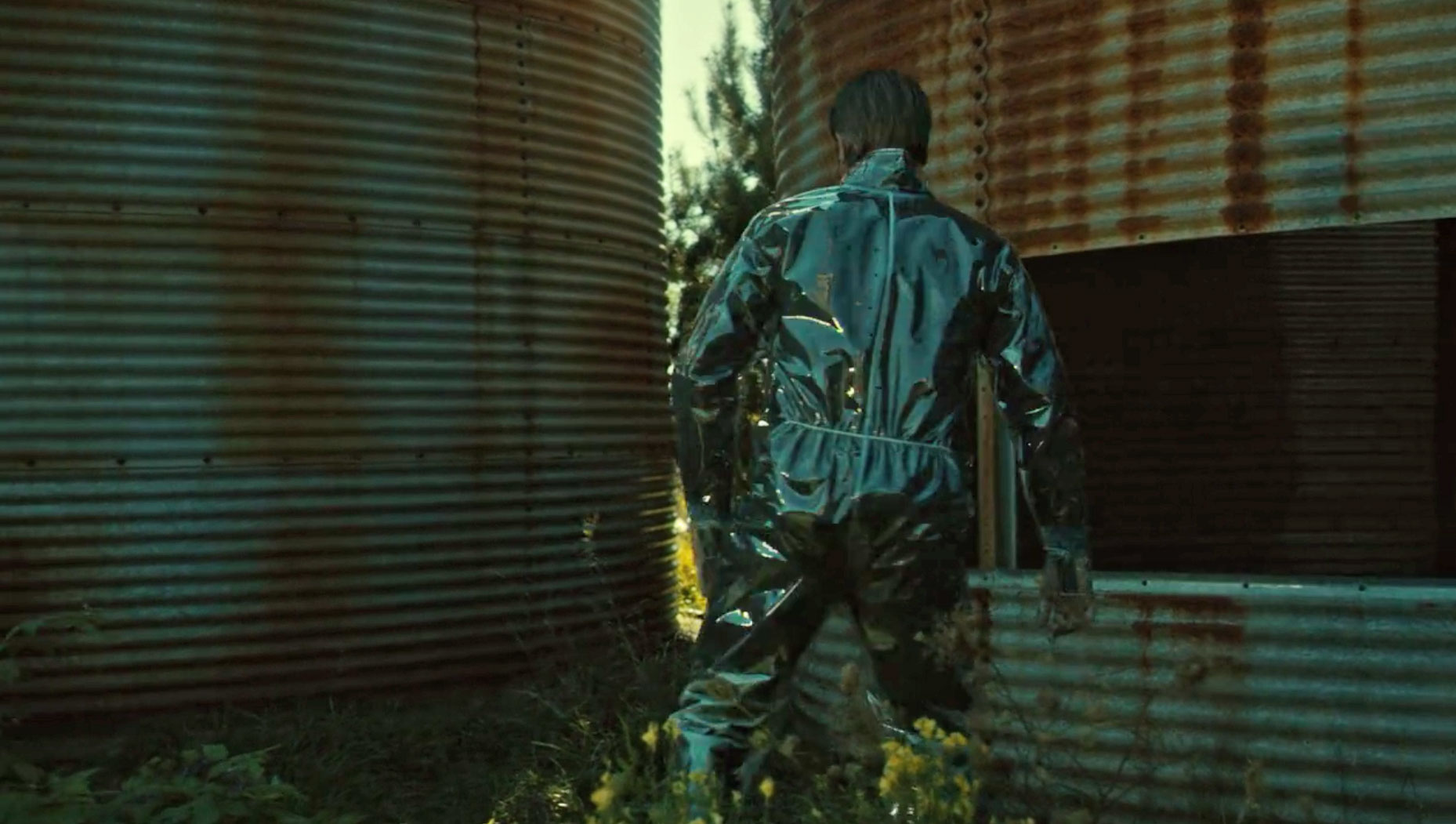