Patrick has no personality. He has no soul. So everything that that is him is outside everything is his grooming is his clothing, his brands. That’s who he is. That’s all he has. 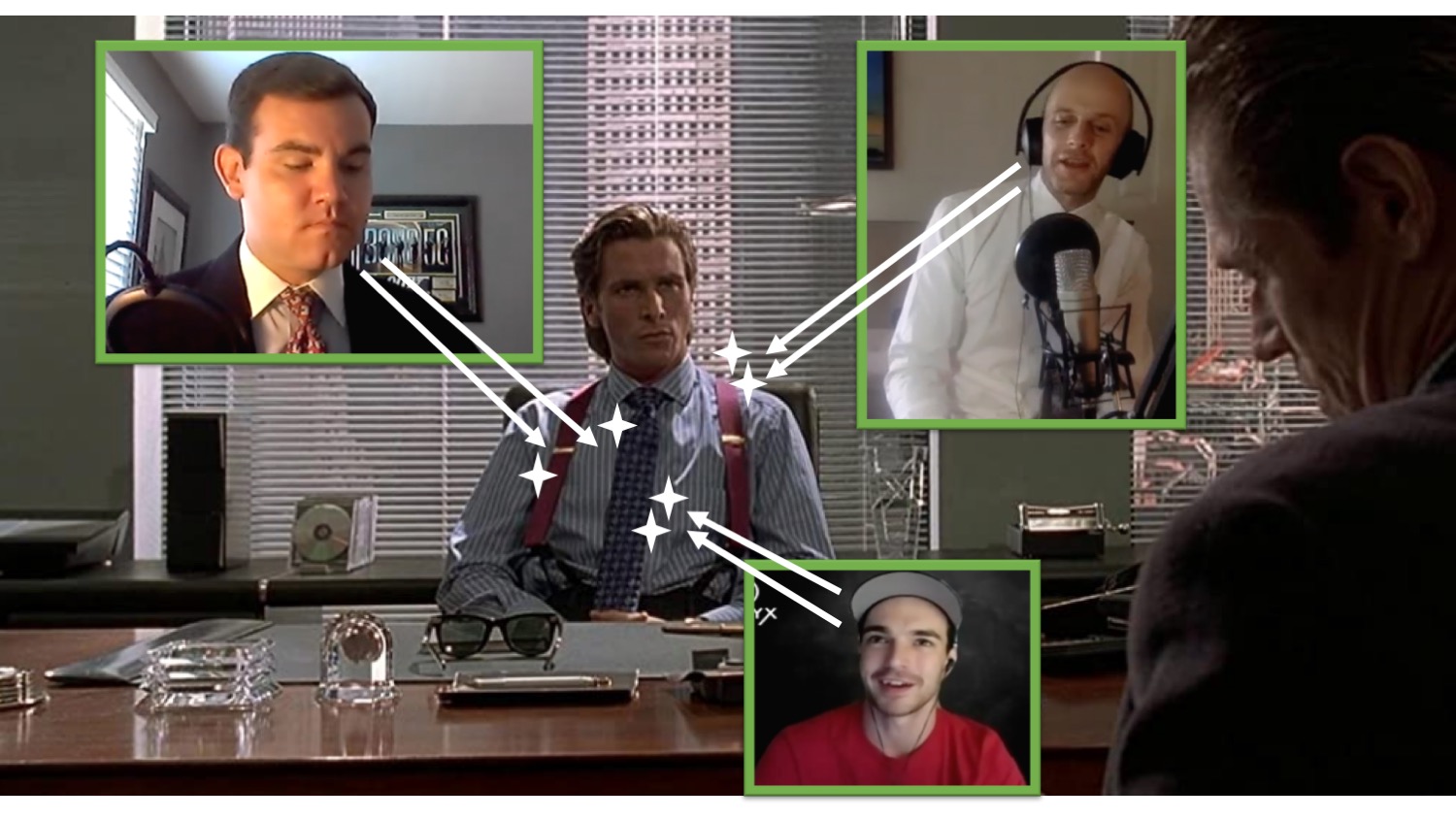 In this episode we look at the style of American Psycho (2000). The costume designer was Isis Mussenden and the film (based on the book by Bret Easton Ellis) was directed by Mary Harron. Topics covered in the episode include: What is the power suit? What characteristics of suiting define them being 80s? What Brands said no to being included in the film?

Are the styles still relatable to modern day clothing? What style was mentioned in the book? How was the book different to the film? Did Patrick Bateman really commit those murders?

Thank you to my guests Kyle Barbeau from EasySmilesAndExpensiveWatches on Instagram, and Jon Shanahan from The Kavalier. Be sure to check out his Tik Tok channel with a dedicated video to the grooming of Patrick Bateman. The podcast is available to listen on iTunes, Stitcher or Spotify or in the player below. You can also catch our chat on YouTube. Below are some moments transcribed from the interview.

KB: ( Kyle Barbeau) I think of a few things. I think of a lower gorge, although all of his suits have but it’s not exaggerated. It’s a lower gorge the shoulders are much wider. You wear suits often with a pretty pronounced pinstripe and I think that’s what they intend the power suit look to be.

JS: (Jon Shanahan) Yeah definitely the hourglass style, like big strong padded shoulders with a wide and then a taper down. I also think of Wall Street movies to where you get this double breasted super low cut. I don’t really consider that a power look as much as it is just an indicator of a successful person. Especially I associate like Navy chalk stripe in that way. I think we talked about that when we talked about De Niro and Limitless, right? That was a more modern style, like a modern power suit. But you see the same elements back in the 80s. 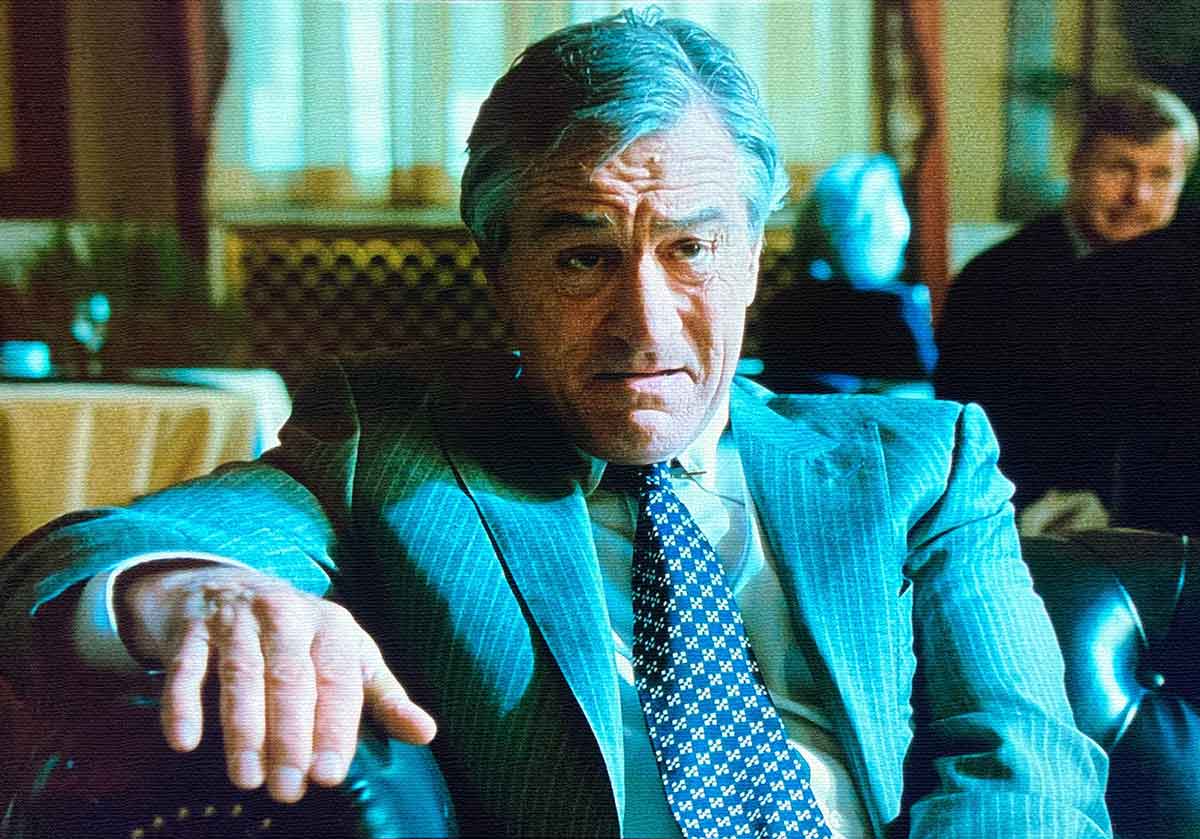 Differences in the book

There is way more graphic psychopathic murders. Scenes of torture are described in nauseating detail. It makes the film feel like a PG. The film has some elements of ambiguity like was it all in his head. There is none of that in the book. You’re under no illusion that this is all happening and that Pat Bateman is carrying out these murders.

There is also more sadism in the book that doesn’t really come through in the film. For example he gets a piss cube from the toilets, dresses it in chocolate and wraps it up, gives it to a waiter to give Evelyn as a birthday treat at the restaurant and watches her eat it.

The reviews of the music are separate chapters and not interlaced with the sex scenes. And they’re almost wedged in at the end. Completely separate from the book.

Bateman and Evelyn also go to the Hamptons for a holiday. He plays out the role of a normal boyfriend, buys Evelyn a dog. After a while she starts to ignore the dog so he kills it and cooks it, she doesn’t even notice it’s missing.

With regards to style there is a lot of it, lot of topical discussions like how does one wear a vest, are argyle socks too casual for business wear? And he and Bryce both act as an agony aunt for all the questions.

The film had various problems with designer labels during production. Cerruti agreed to allow Christian Bale to wear their clothes, but not when the character was killing anyone. Rolex agreed that anyone in the film could wear their watches except Bateman (hence the famous line from the book “Don’t touch the Rolex” had to be changed to “Don’t touch the watch”).

Perry Ellis provided underwear at the last minute after Calvin Klein pulled out of the project. Comme des Garçons refused to allow one of their overnight bags to be used to carry a corpse, so Jean Paul Gaultier was used instead. 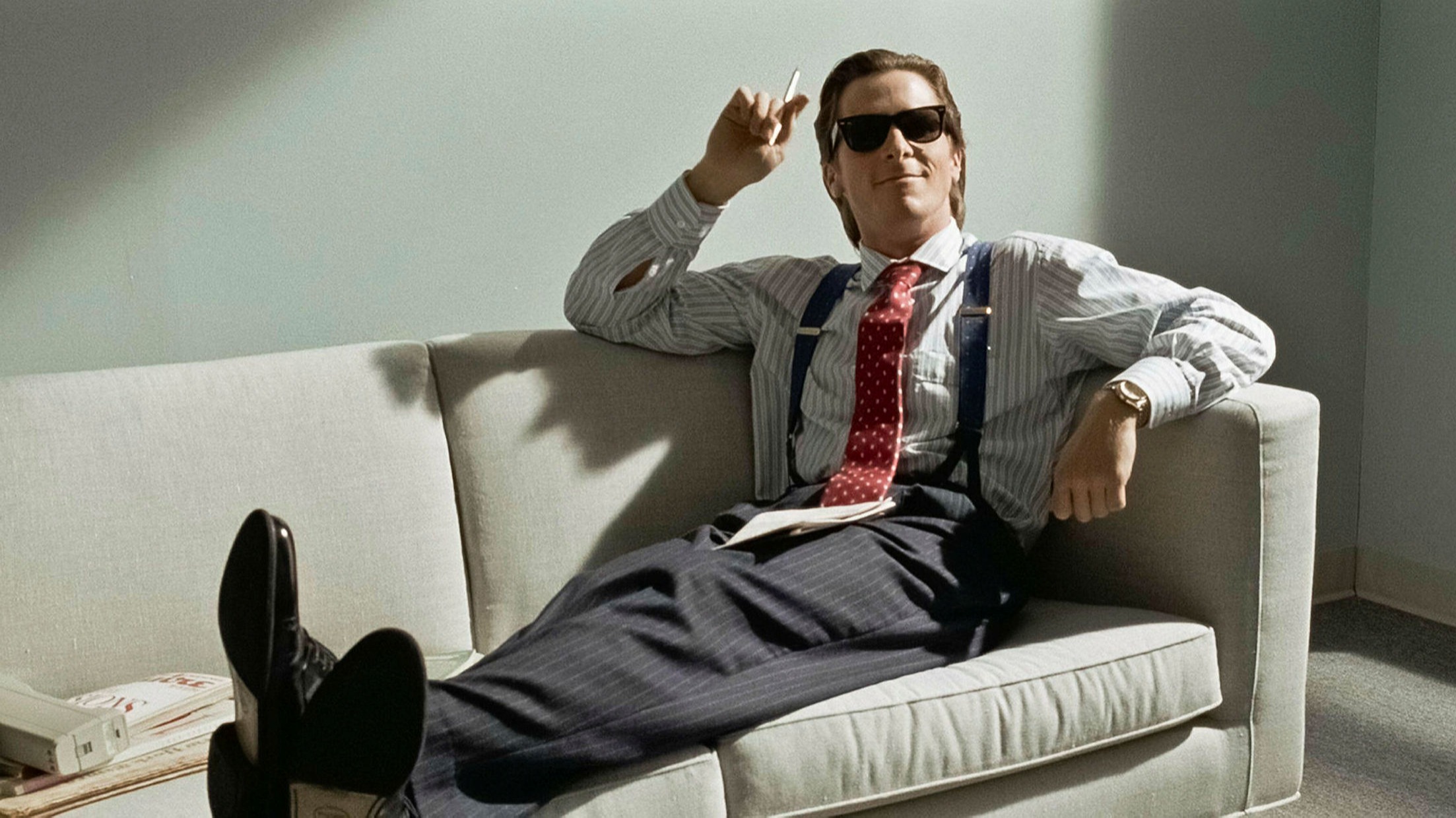 I have bought the book and also downloaded and listened to 18 hours of audio of American Psycho, by Bret Easton Ellis. Very much recommend. The film is available on Blu Ray. PS – dear Todd, the guy who replied to my request on the BEE site when I asked for an interview, go fuck yourself.

Brands featured in the book

These are just some, I started to make a list only on what Patrick Bateman wears, to be honest I gave up halfway in because it’s exhausting. This is not a comprehensive list.

Burberry (to match the scarf) with a whale embroidered on it.

Allan Flusser – 80s Drape suit which is an updated version from the 30s style. The favoured version has extended natural shoulders, a full chest a bladed back, the soft rolled lapels should be 4″ wide with the peak finishing 3/4 of the way across the shoulders. Properly used on Double Breasted suits peak lapels are considered more elegant than notched ones. Low slung pockets have a flapped besom design. Above the flap theres a slit trimmed on either side, with a flat narrow strip of cloth. 4 X Buttons form a low slung square. Above it where the lapels cross there are two more buttons. The trousers are deeply pleated and cut full to continue the flow of the wide jacket. An extended waist is cut slightly higher in the front. Tabs make the suspenders fit well at the centre back.

Edward Sexton – A suit tailored by