I’m sure I’m the last to inform you that the Costume Designer Christopher Hargadon told Esquire that Garrison Bespoke supplied the suits.** But who supplied the silk paisley tie for Hannibal in episode 9? So I’ve buckled, done some quiet digging and Googled the heck out of it.

I believe this to be a floral tie, not paisley. Apologies for the confusion. 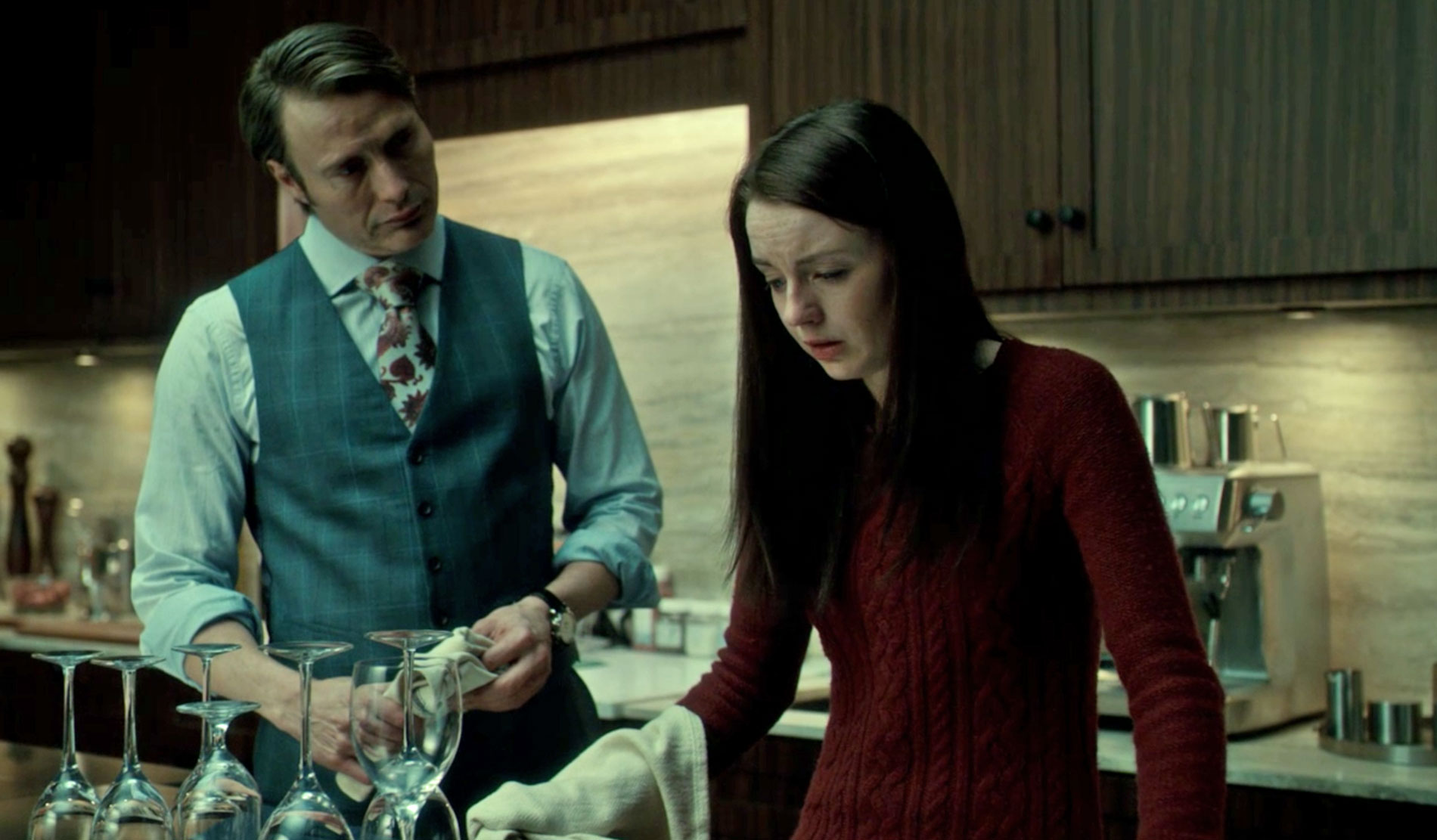 A quick look back

As we’ve reached episode 9 I believe we’ve started to exhaust some of the ties for Hannibal. A lot of silk paisley, the odd medallion tie and some solid ties like the gold ribbed tie below as I mentioned in the write up for episode 1. 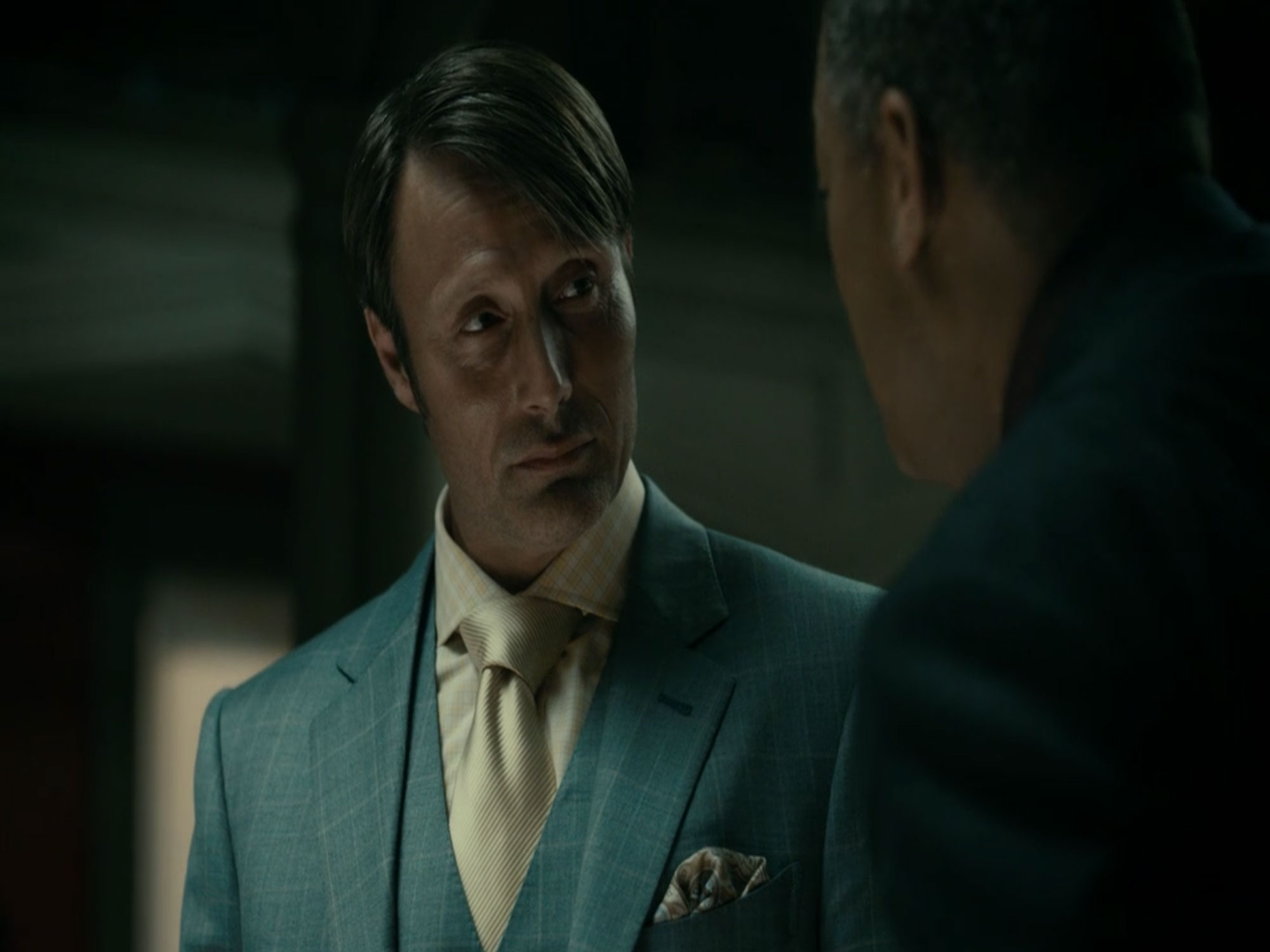 End of a season

I have now snuck ahead with my viewings and watched the entire 1st series. Hey Anastasia is away, it’s the only opportunity I’ll have to binge a few episodes. I can say that my favourite tie, at least the one I noticed immediately is the silver and drained blood red floral tie seen in episode 6. This is a flashback scene and to an audience who are not familiar with the source material, this is the big reveal where we find out it’s Hannibal that is the Chesapeake Ripper. 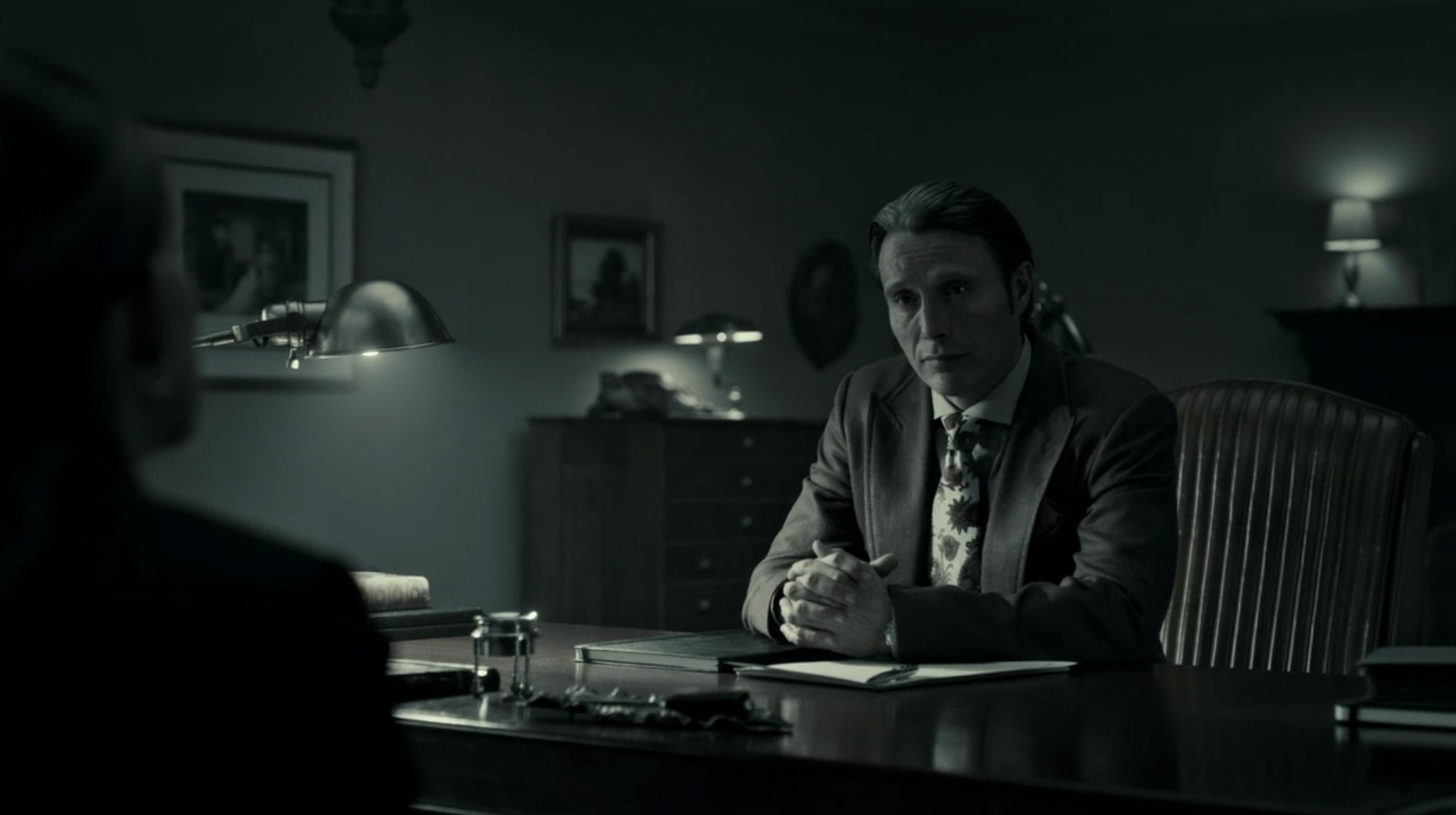 Confession of a killer

In this episode, Abigail confesses to Dr. Lecter that she knew her father was a killer and that she acted as the lure for his victims. Another big reveal in the series and for that reason I’m coining this the Reveal Tie.

It’s one of the few noticeable ties for it’s stark colours. Hannibal wears a lot of incredible paisley ties, but often in the same bunched paisley pattern. I wonder if the costume designer saves this one for important scenes especially, because it’s the most identifiable. Almost like a show piece tie. Many other brands supplied ties for production; Canali, Dion, Etro, Joseph & Feiss, Isaia, Dalessandro, Paul Smith, Harry Rosen, Stefano Conti, Stefano Ricci, Moores and Tino Cosma to name but a few. I’ve yet to identify this one.

When I interviewed costume designer Christopher Hargadon about the origins of the tie he commented,

So that honestly was my favourite tie. Yeah, I’ve had a lot of vintage collections. And I’ve had contemporary collections. But that, in the entire series, was my favourite one. There was another one that was sort of a burgundy base with greens and a sort of purple. Those were my two favourites. Yeah. Where did that tie go?

We didn’t know if there was a season four, there was a possibility of being a season four. So everything was left. And then when they decided to drop the series, I was actually working somewhere else. And so I wasn’t even there for any of the closing down at the shop. I don’t know where it is. I’m so sorry. 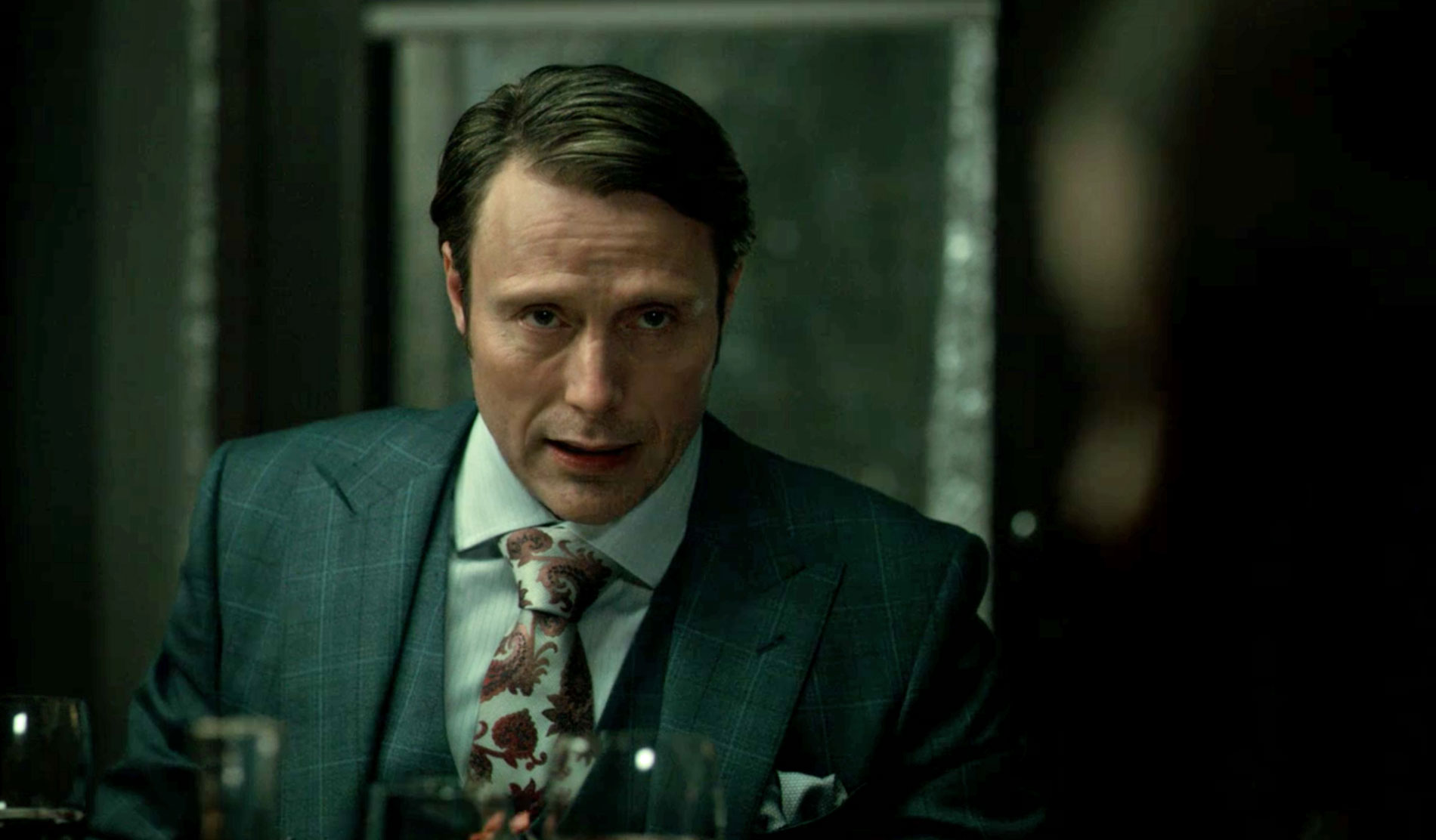 And the other tie?

In an earlier scene we see Hannibal wears a,

As described by the auction on Prop Store. These ties are very accessibly priced and can be picked up quite readily on eBay. 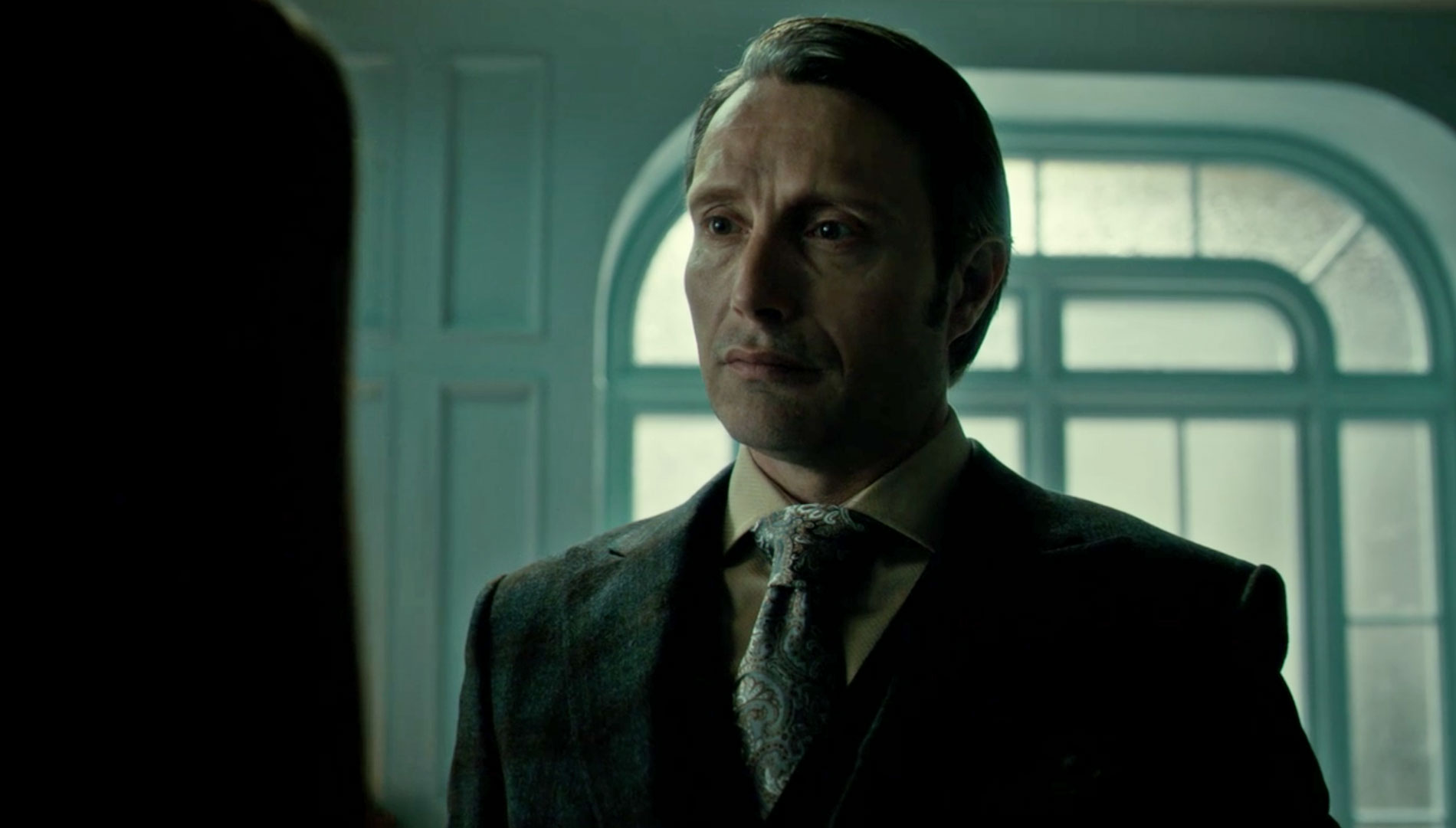 **Along with Antonio Valente and Nino Cioppa.

All screen grabs taken from the Hannibal Series. Hannibal is based on the books written by Thomas Harris (I’ve read, but a long time ago). The TV series (1-3) is available to buy on Blu Ray.