Before I get to Dr. Chiltern’s Double Breasted Camel Blazer, which is probably the most interesting sartorial piece of the episode, I need to talk about the ending. I couldn’t fathom how on first viewing, Hannibal managed to cover such a huge distance of his office, with such stealth, in order to choke Miriam Lass

Only on second viewing did I notice that Hannibal has removed his shoes in order to efficiently sneak up on Miriam Lass. Miriam Lass played by Anna Chlumsky (amazingly I recognised her from My Girl which I howled at) in a flashback becomes Hannibal’s first on-screen victim. 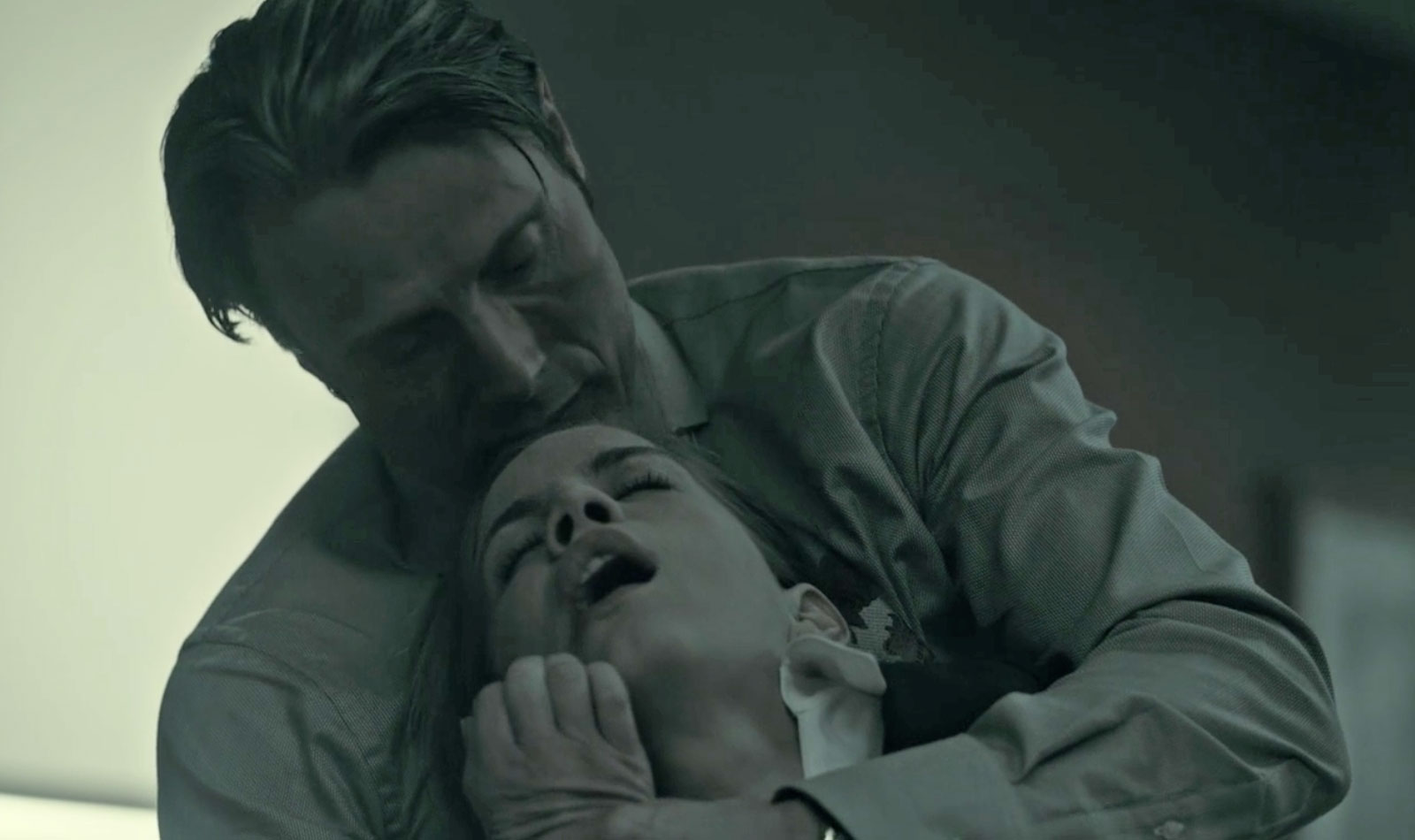 With the echoes of Red Dragon when Will Graham discovers the recipe in Dr Lecter’s office for a future victim before being stabbed by Dr Lecter, Miriam Lass also unearths evidence that will link Hannibal to killings. She finds Dr Lecter’s drawing of Wound Man, a surgical diagram which first appeared in European medical manuscripts. 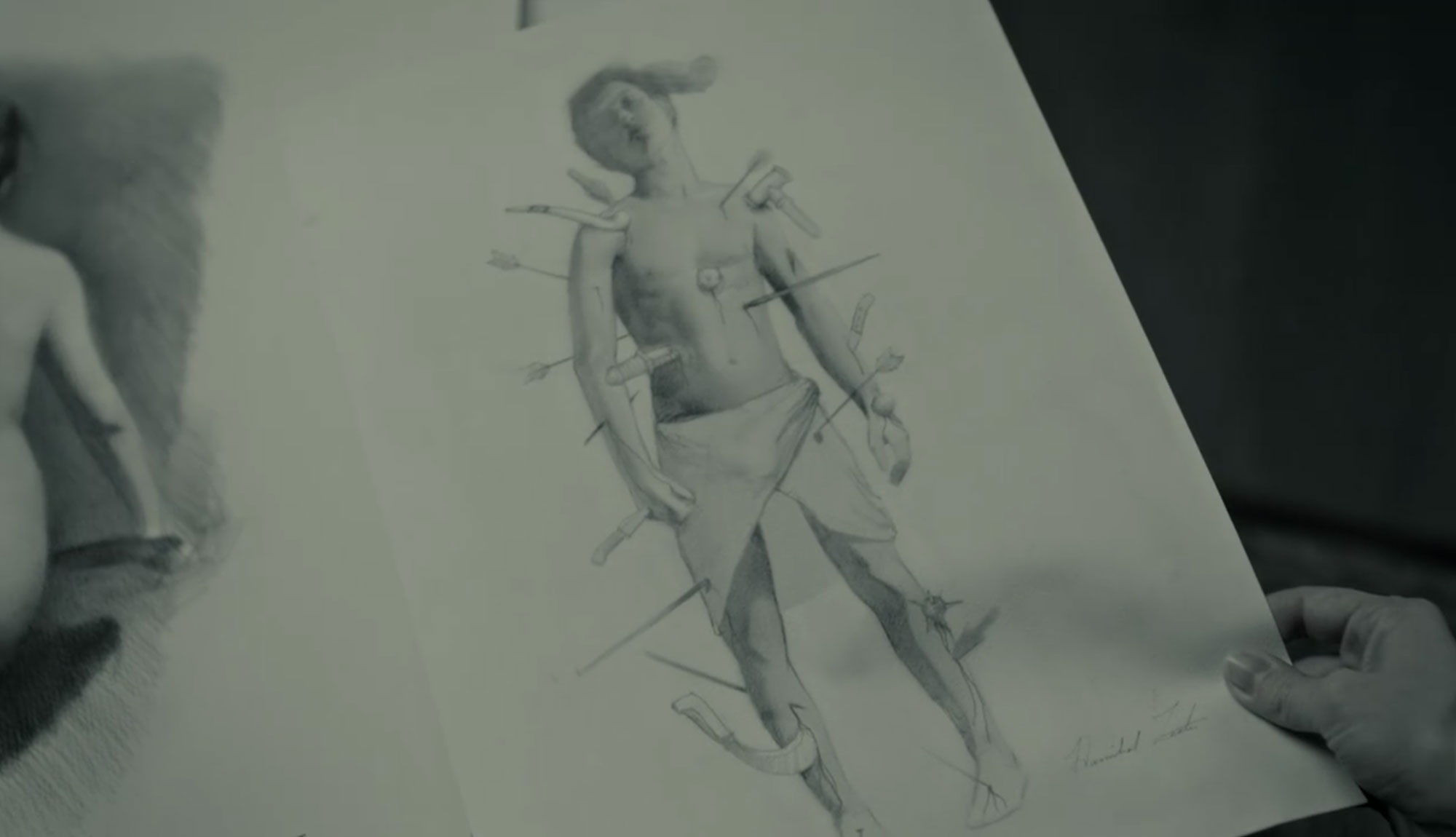 In the background we can see Hannibal climb down his library stairwell and walk with purpose towards Miriam. Due to the saturation and intensity of the scene I missed the fact that Hannibal had removed his shoes first time round. Only on repeat viewing did I notice. It’s a very tiny detail but with the hardened floor and Hannibal wouldn’t have been able to move in silence in his ambush of Miriam. 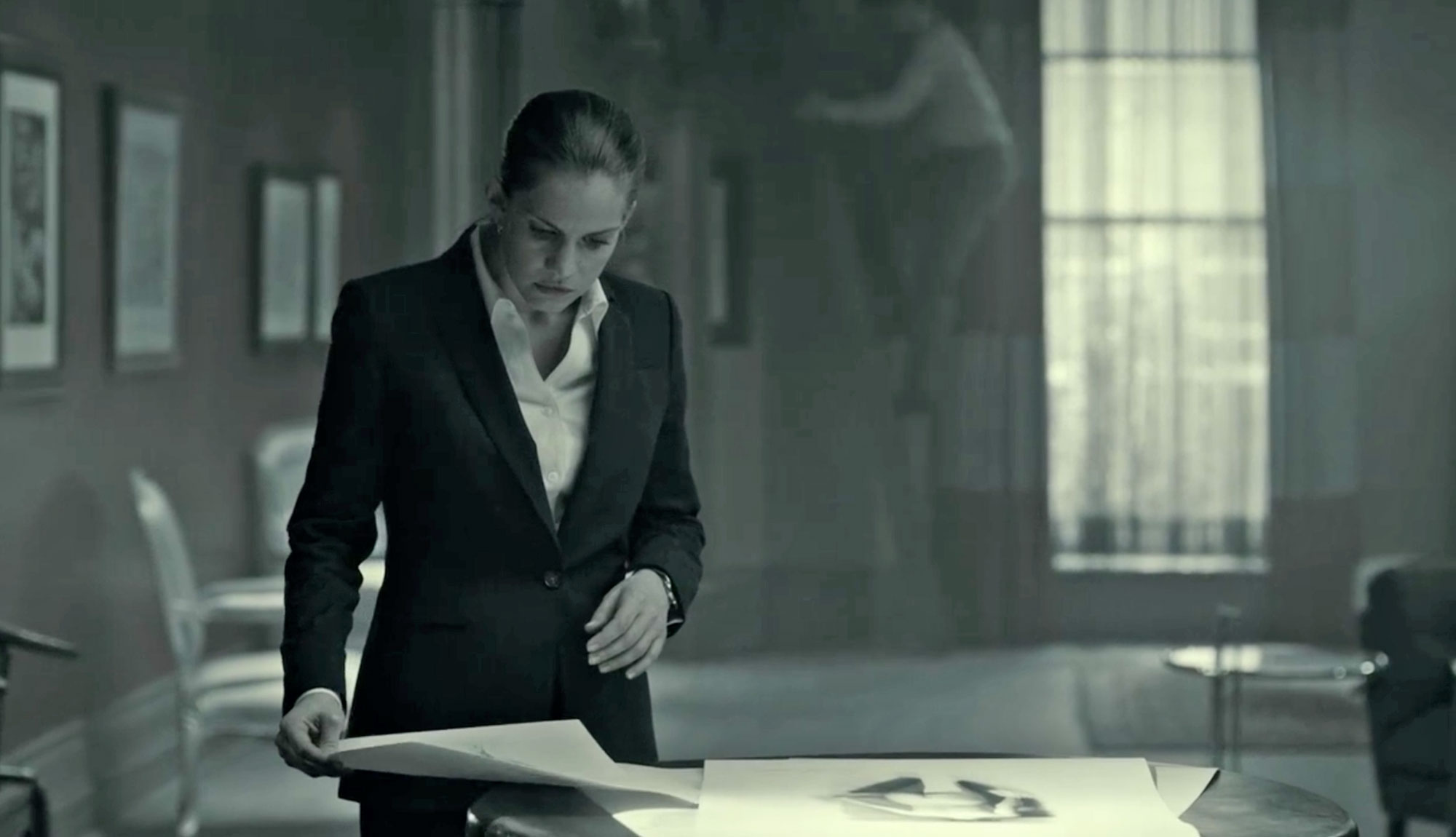 He had excused himself to look for some journals, presumably to remove his shoes and put Miriam in a choke hold. (He doesn’t kill her then, but dismembers her and sends an arm to Jack Crawford as a message later on).

Miriam would have been killed regardless of finding those drawings, as Hannibal had already excused himself to remove his shoes. Miriam was getting too close to exposing Hannibal for a previous killing. 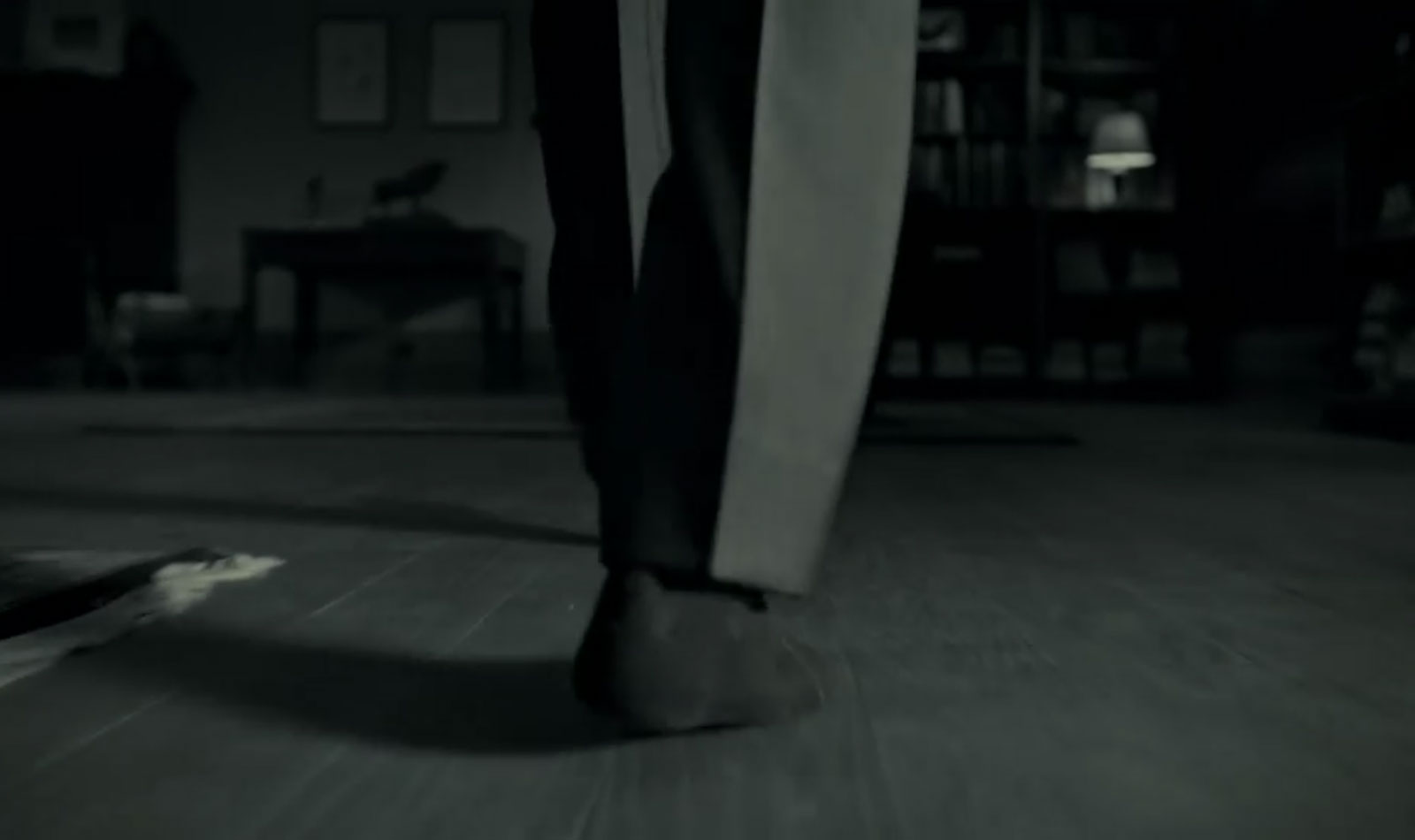 In an earlier scene he entertains Dr. Frederick Chilton and Alana for a dinner which consists of tongue. A brief back and forth between Dr. Chilton and Dr. Lecter preludes the final scene of The Silence of the Lambs as Hannibal is seen stalking a panicking Dr. Lecter as he informs Clarice Starling that he will be ‘having an old friend for dinner’. There is also another line lifted from that same scene where Hannibal consoles Jack Crawford. In reference to Jack’s terminally ill wife he comments ‘it is a better world with her in it’. 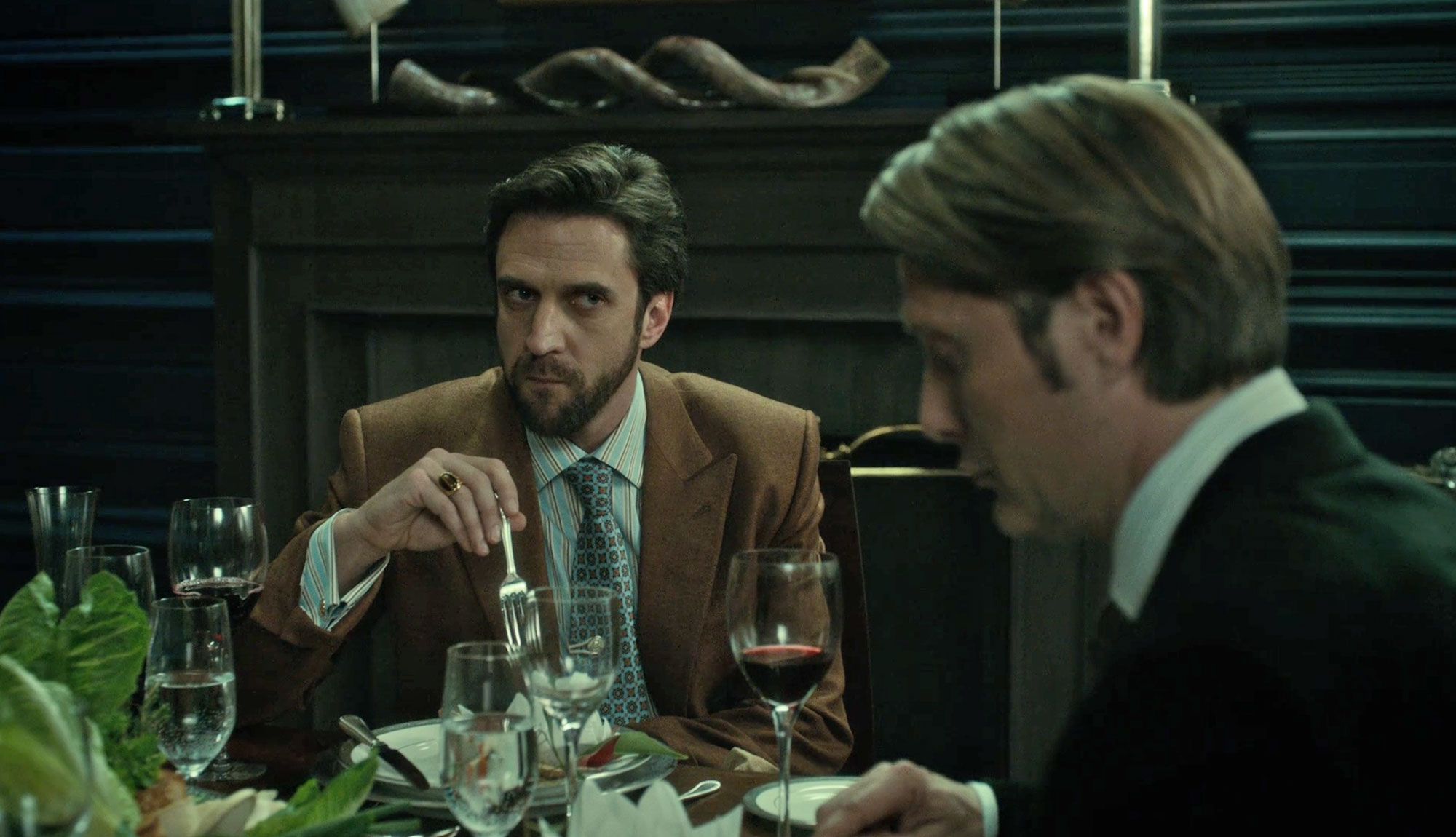 Rather than focus on Dr. Lecter’s dinner attire, although curiously this is the first dinner jacket we see that is not a peak lapel, I wanted to shine a light on Dr Chiltern here. In contrast to Hannibal Dr. Chiltern (played by Raul Esparza) has opted for a woollen Double Breasted Camel Blazer with padded shoulders and a blue, white and black striped shirt with double cuffs and a semi spread collar. His blue and mustard medallion tie is a leaf out of Dr Lecter’s book and works perfectly here. I first started to pay notice to the medallion ties of Hannibal in episode 5. 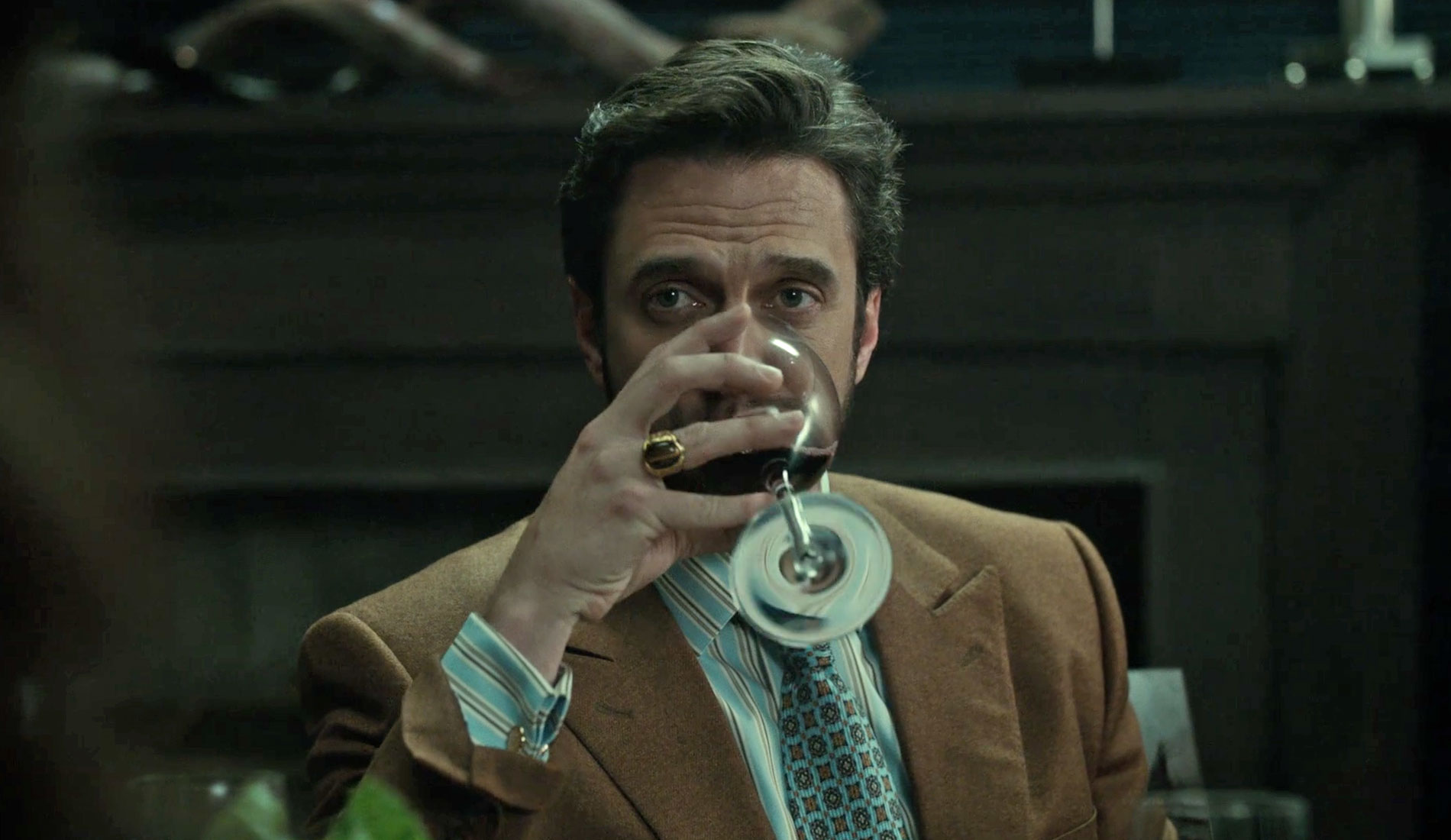 Only Dr. Chiltern can’t help to show his affluence by folding back his cuff, presumably to unveil his gold cufflinks. Along with his gold ring with an oval-shaped stone. However, his style would be better presented with humility and tailoring that would naturally show the cufflink, rather than to crudely peel back the cuff itself. This is a sign of vanity on Dr. Chiltern’s part. Whilst Hannibal might be accused of vanity himself with the double windsor knots, (Fleming fans will get the reference) he doesn’t augment his clothes in such a fashion.

Aside from that, we cannot fault Dr. Chiltern’s efforts here. He has arrived to dinner in immaculate style, and is keen to prove to be an equal to Hannibal. 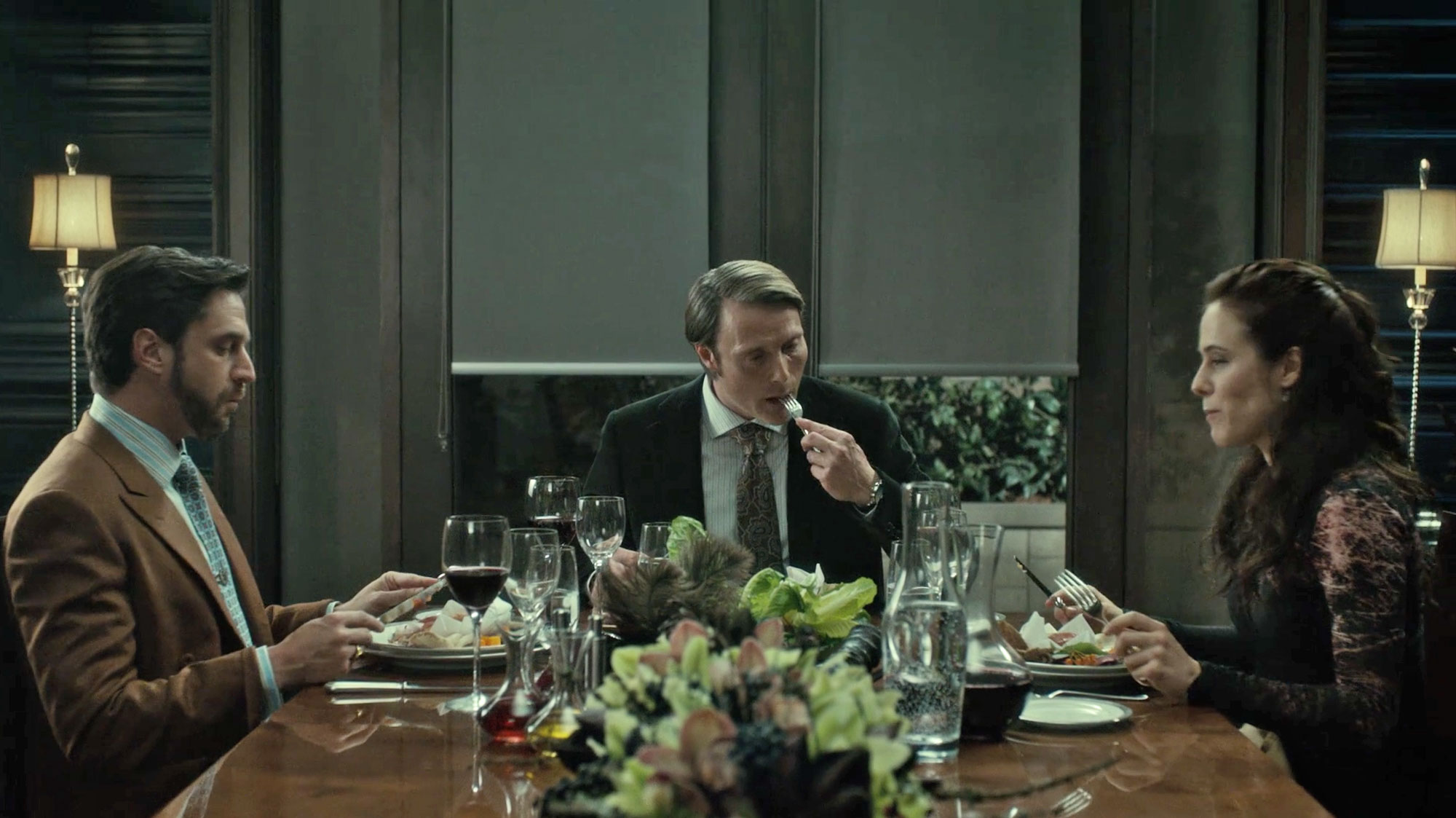