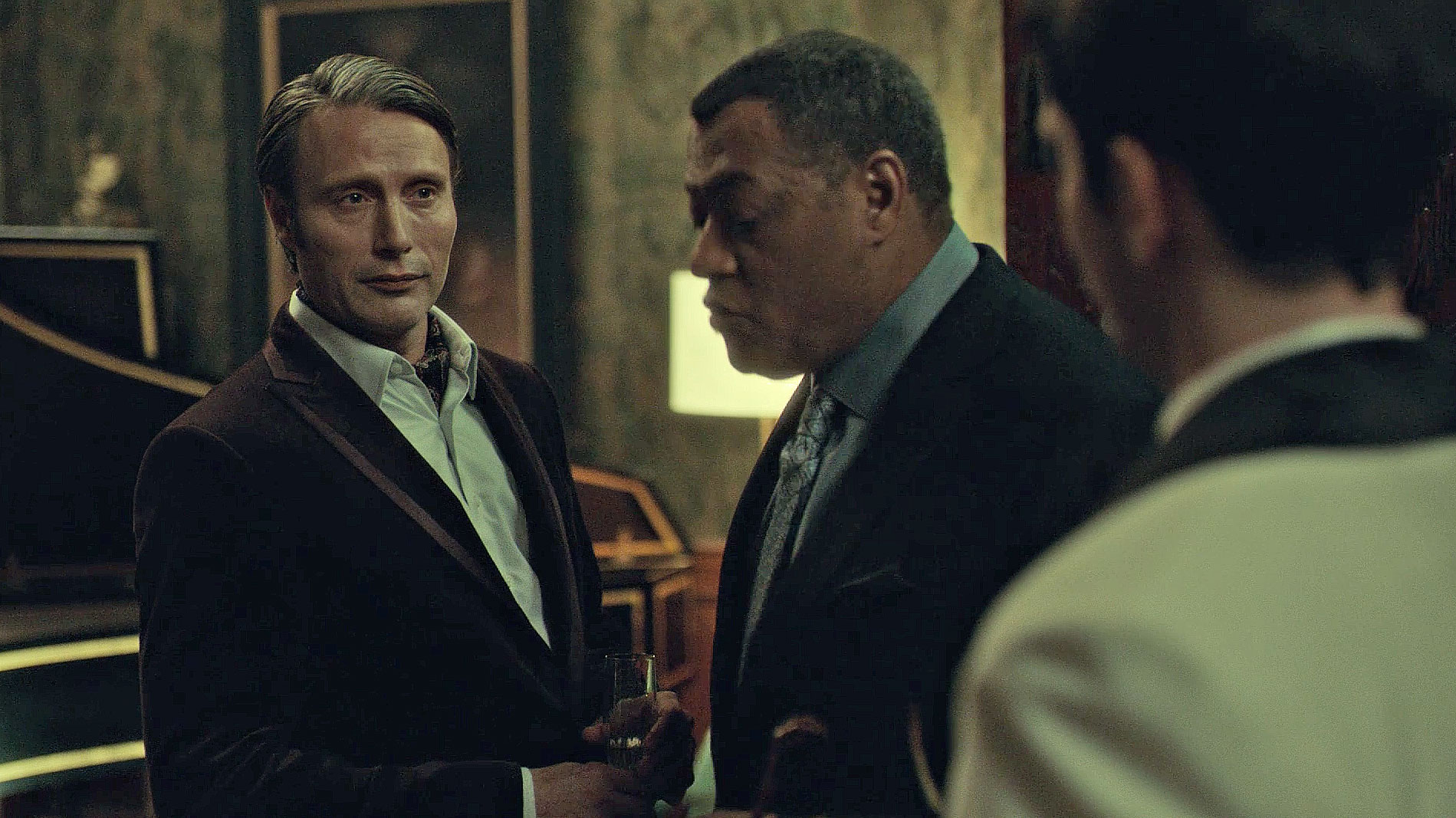 Hannibal has his appetite back and is throwing a lavish party. Hannibal has dispensed with the 3-piece suits and has opted for a velvet dinner jacket with satin trim around the lapels and a paisley cravat. This is a relatively casual look for Hannibal, but this is home after all and he is out of office hours. If this was a black tie event elsewhere and someone else was hosting I’m confident Hannibal would be wearing a tie, probably a bow tie with such a jacket. Prop Store auction sold this $700 and is described as being,

[…] made of maroon velvet with a silk paisley lined interior.

The one button single breasted jacket has a ribbon-width trim that runs around the peak lapels, through the back of the collar and finishes an inch or so, evenly, around the bottom of the curved hem. The single vent also has a satin trim. The shoulders run smooth, there is a barchetta breast pocket and the skirt pockets are straight with trim over the flaps. 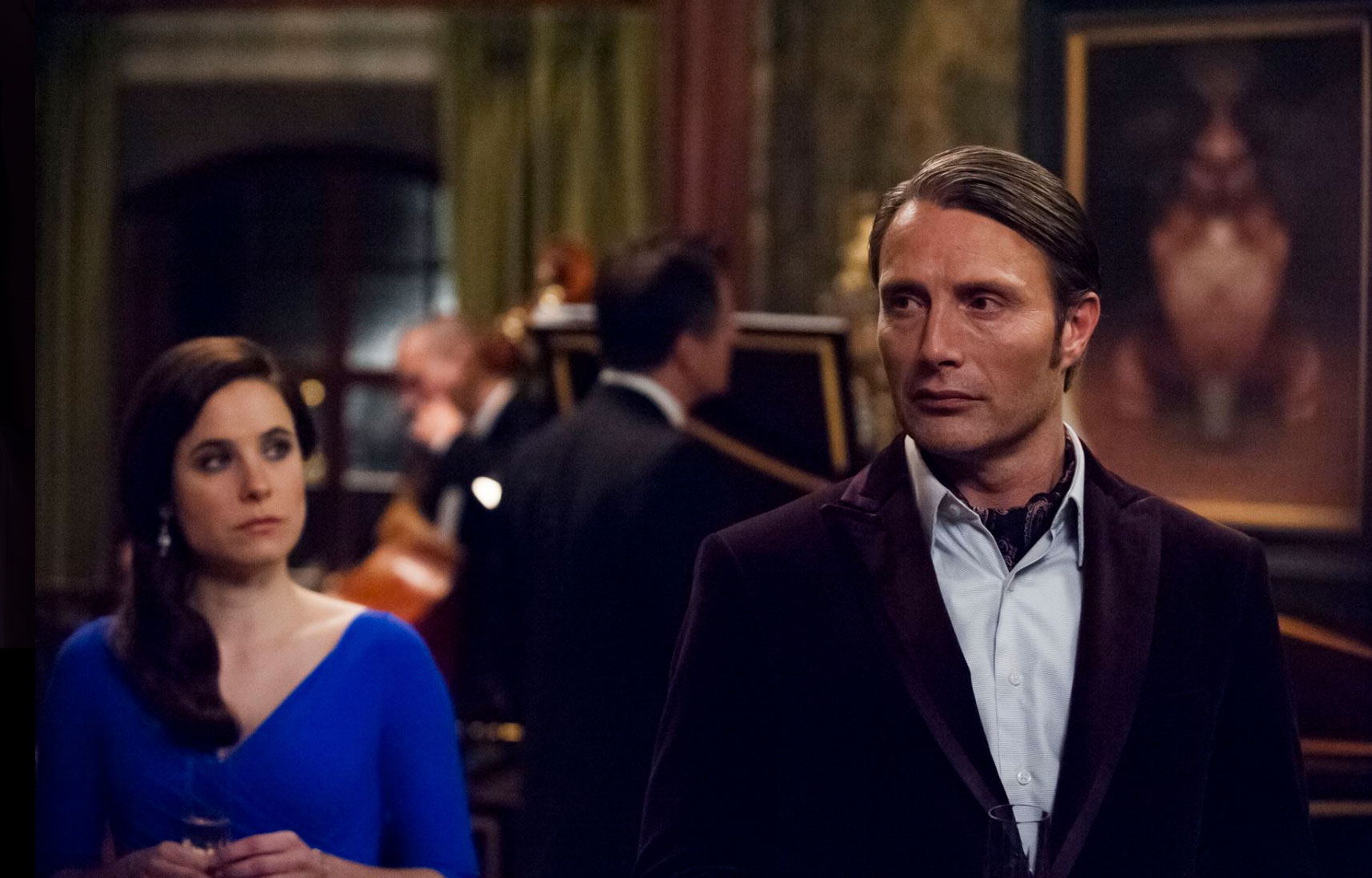 That’s what they’ll call him

The velvet dinner jacket brings out a warm side to Hannibal, much like we saw in the previous episode when we saw him wear a maroon sweater for his breakfast with Jack. This is a very restrained version of Hannibal we are seeing here, but he still looks refined and sophisticated. With this velvet jacket, it makes him stand out as the host. As Jack Crawford takes some party food to-go, you can see that Hannibal is visibly taken aback. Forensics later find that there is no human meat in the food, maybe Hannibal got lucky? Maybe he was, as he always is, one step ahead of Jack and the FBI.

Personally I think his reaction was a bit of misdirection for our sake, or, that he has been hurt by Jack that he once again suspects him as being the Chesapeake Ripper. This splinters his relationship and as we’ll later see, becomes unreconcilable. As Jack talks to Dr. Chiltern, we hear the name for the first time as Frederick says,

[..] Hannibal the Cannibal, that’s what they’ll call him.

Thanks to the Prop Store Auction, we know this jacket is by Etro, presumably off the peg but no doubt tailored for Mads Mikkelsen. Etro is a family-managed Italian fashion house founded in 1968. It is synonymous with paisley patterns, which the company started making in 1981. They still do very fancy jackets, some very accessibly priced which you can find on their website here. The paisley silk cravat is not listed in the auction, but I have found a close alternative by Soprano. * 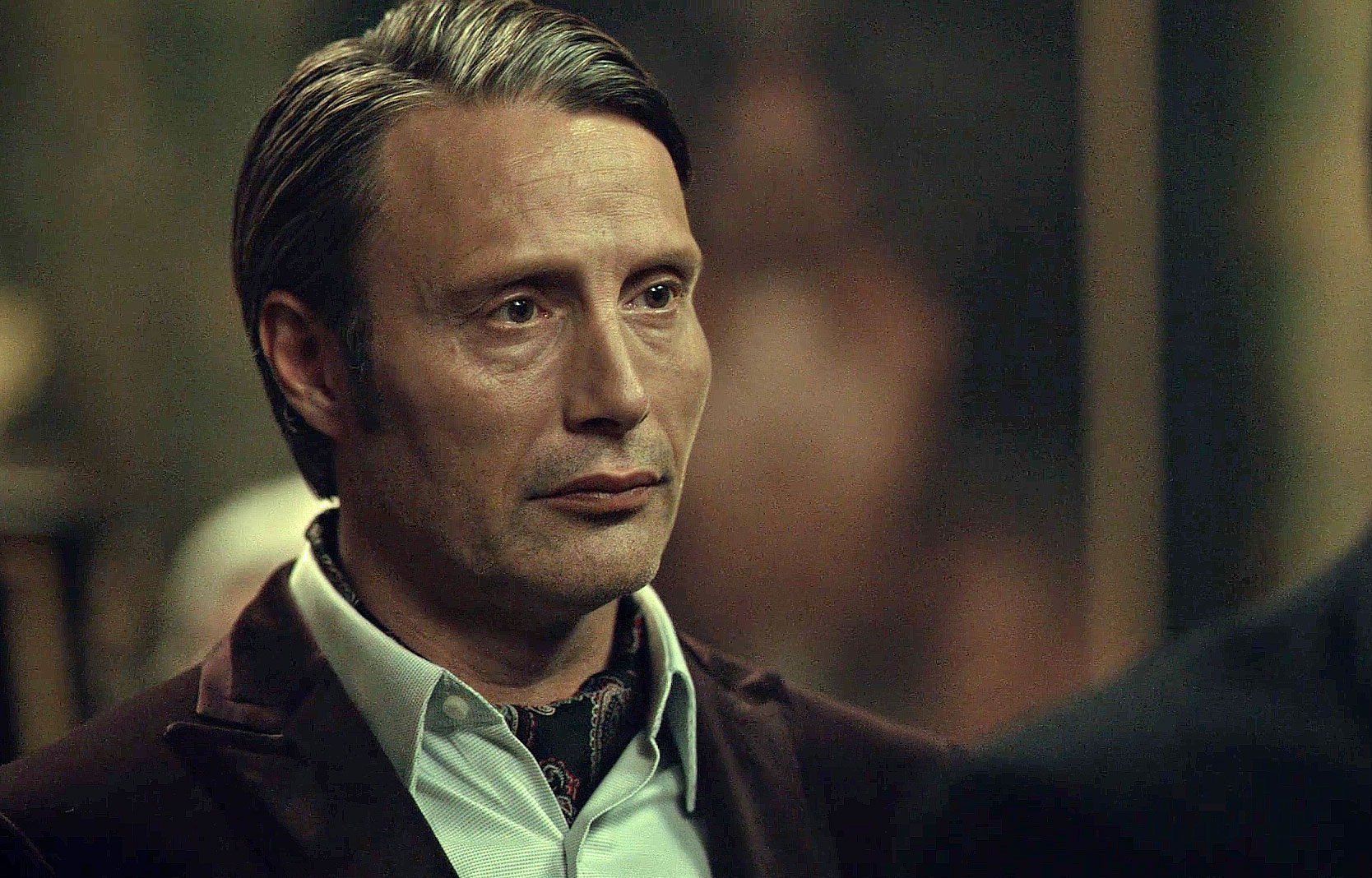 All screen grabs taken from the Hannibal Series currently streaming on Amazon Prime. Used here under the fair use doctrine. If you don’t have Prime Video you can buy the box set on DVD & Blu Ray below. *Amazon Associate link.