Breakfast For Dinner – How Hannibal Dresses Down for Informal Meals (#4)

Hannibal checks Abigail out of the hospital against Alana’s advice. Hannibal and Alana congregate in the final scene at the dinner table as Hannibal has prepared breakfast for dinner with a drugged Abigail in waiting. Slightly reminiscent of the dinner scene from the Hannibal film where Agent Starling played by Julianne Moore is also drugged as she watches Dr Lecter cook and feed Paul Krendler his own brains. 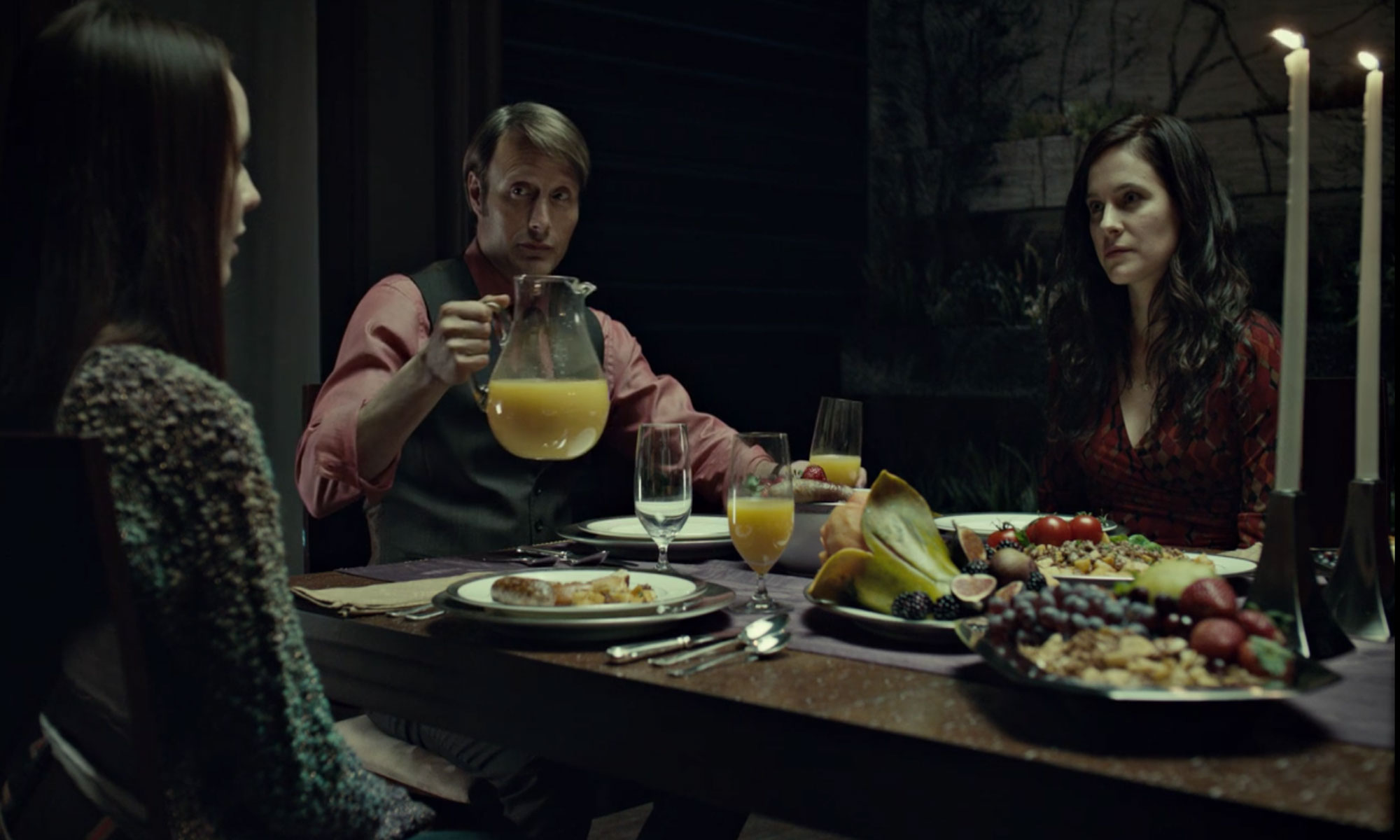 Whilst this scene doesn’t nearly go those extremes, (indeed we have only had some hints and momentary flashbacks that suggests to the audience that Hannibal is a serial killer) it does demonstrate how Hannibal first earns the trust of people before manipulating them.

We also see flashbacks to Hannibal cooking in a white shirt. Whilst he has a protective apron over his trousers, we are led to believe he is so in control of his cooking that he will not get any fat spit or sauce down his white shirt. 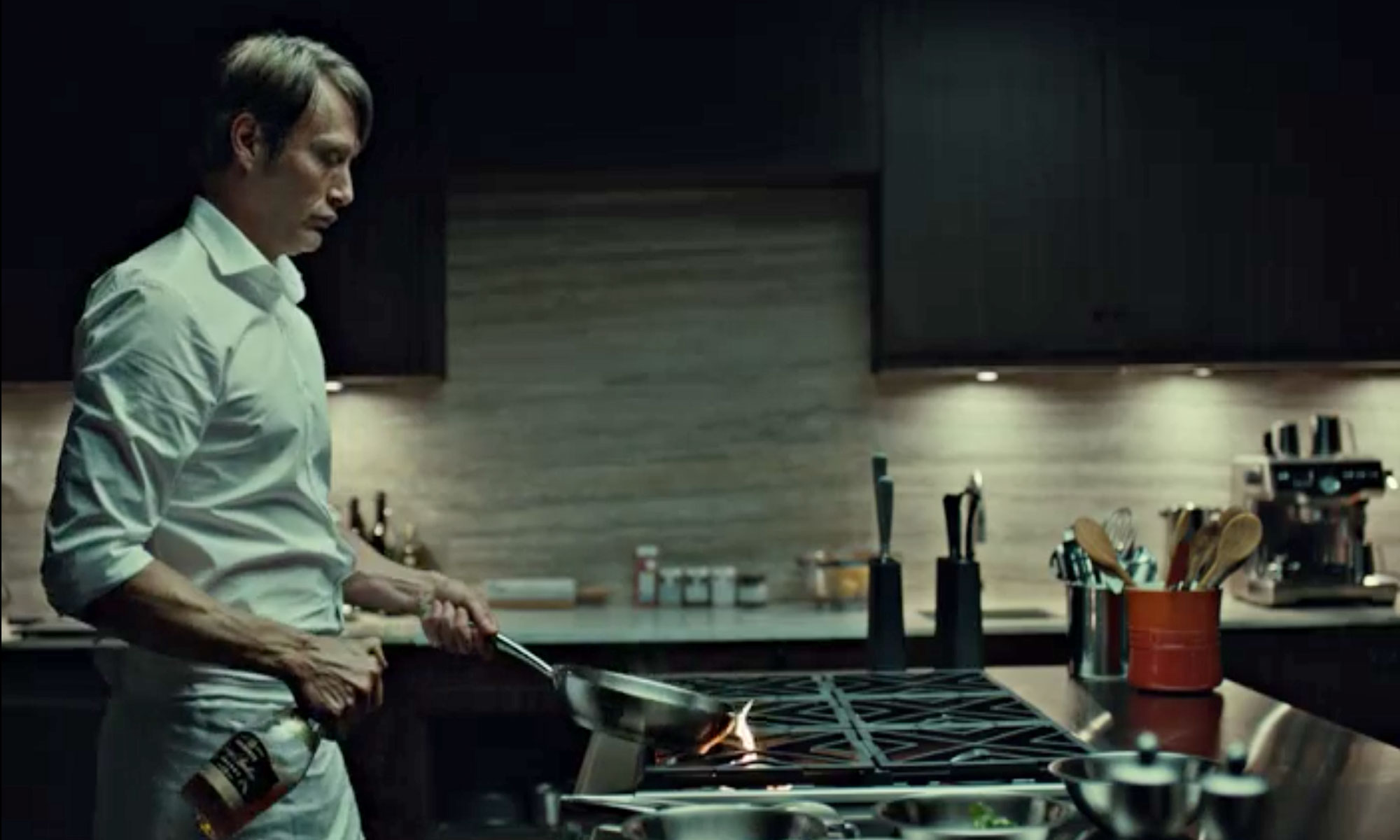 So far we have only seen Hannibal eat dinner alone or with his guest Jack Crawford played by Laurence Fishburne. Each time Hannibal dresses in a peaked lapel dinner jacket. This time, he dispenses with these formalities. Partly because he is coming directly from the kitchen to the dining table having just prepared the meal. Secondly, because the dinner is a breakfast, which would demand a more casual outfit.

Naturally Hannibal’s casual is not sweats or an old merch tee he may have gotten at a Metallica concert. He wears a pink waffle weave shirt with a spread collar, sleeves rolled and a charcoal waistcoat. The look is finished with a brown and blue paisley tie. 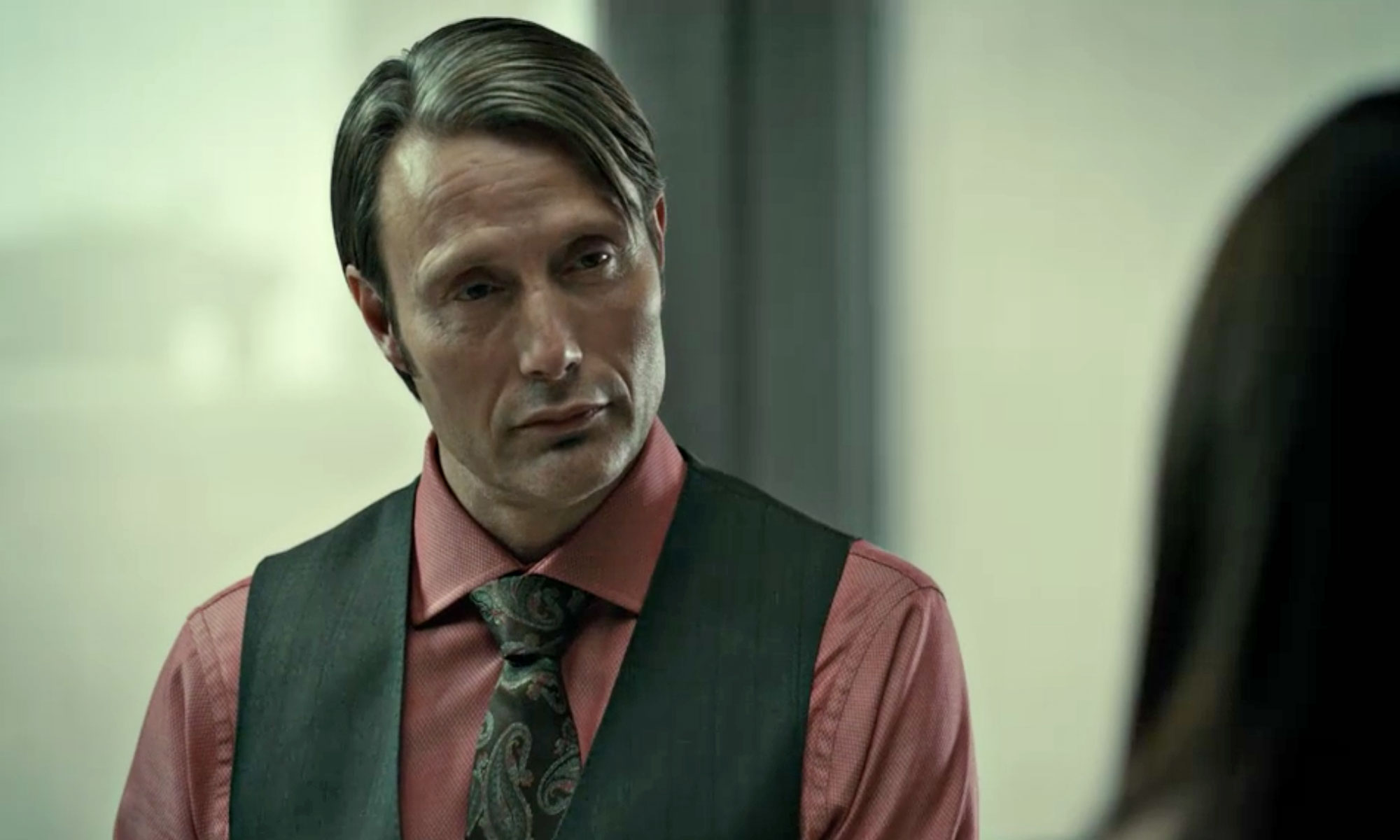 Other takeaways I’ve found from this episode. We see a return to the deep blue and brown check suit jacket that we saw in Episode 3 Potage. I mistakenly thought this was a specially tailored jacket for winter, but here Hannibal wears it just as easily indoors with a matching waistcoat as he does layering for cooler weather. 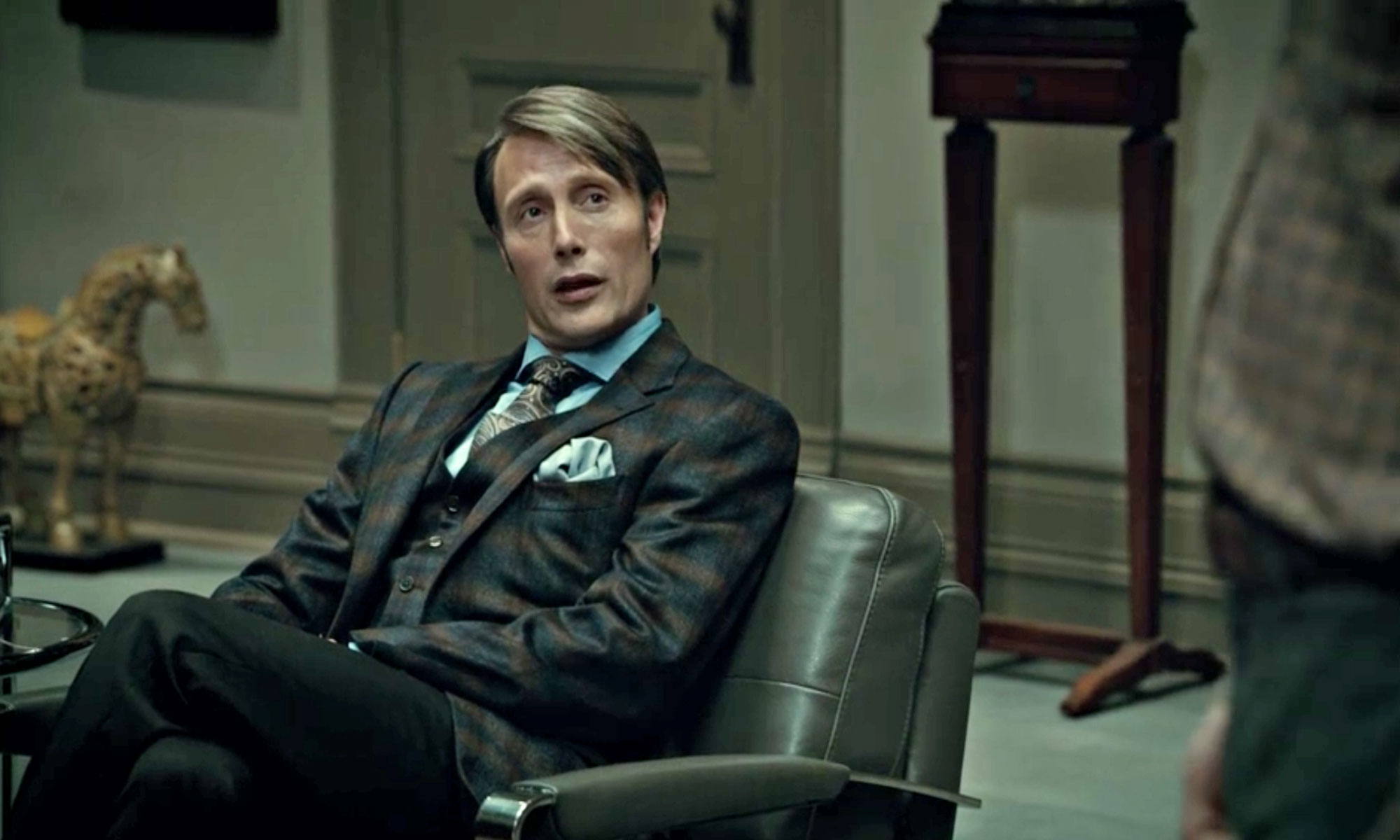 I’m also noticing a difference between the spread collars and the cutaway collars. (I think). Below in an earlier scene with Alana he is wearing a cutaway collar. The others seem to be a spread collar as they at least come down towards his chest and not back towards his shoulders. Please get in touch if you’d like to correct any of this. I always read my DM’s on Instagram. 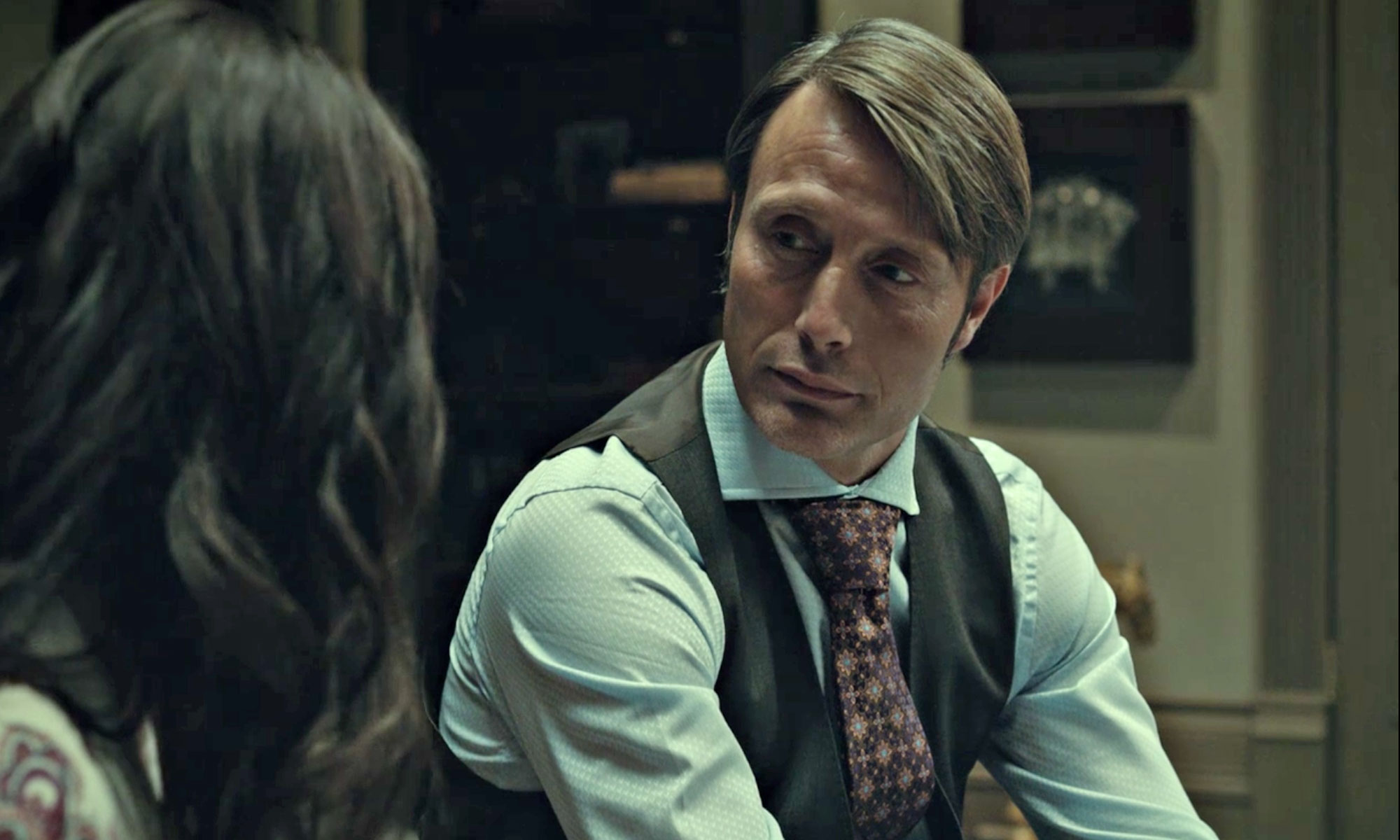 All screen grabs taken from the Hannibal Series currently streaming on Amazon Prime. Below is another screen grabs from the episode for future reference. 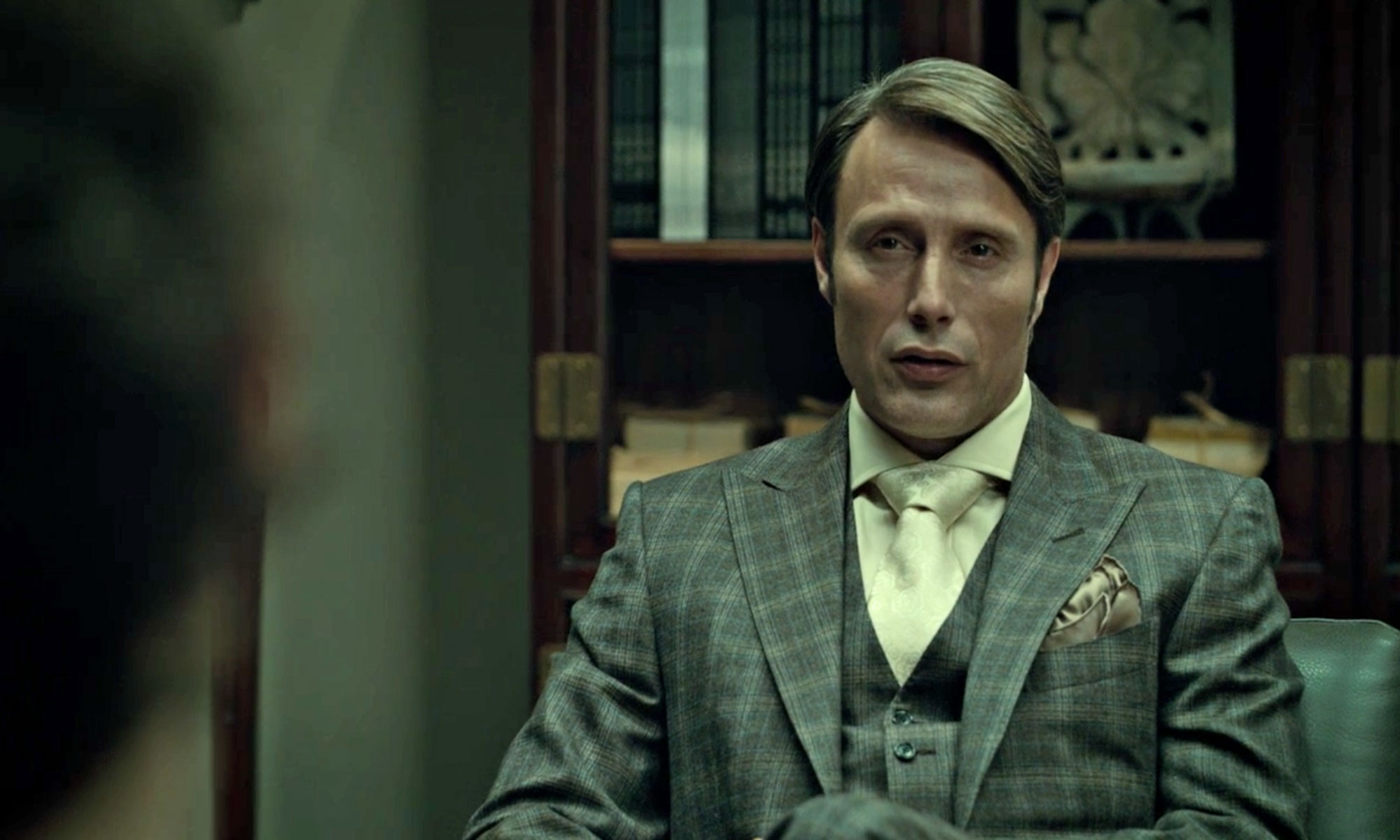