I went ahead and confirmed the order, this would blow what I had saved for the watch, but I was happy with this. 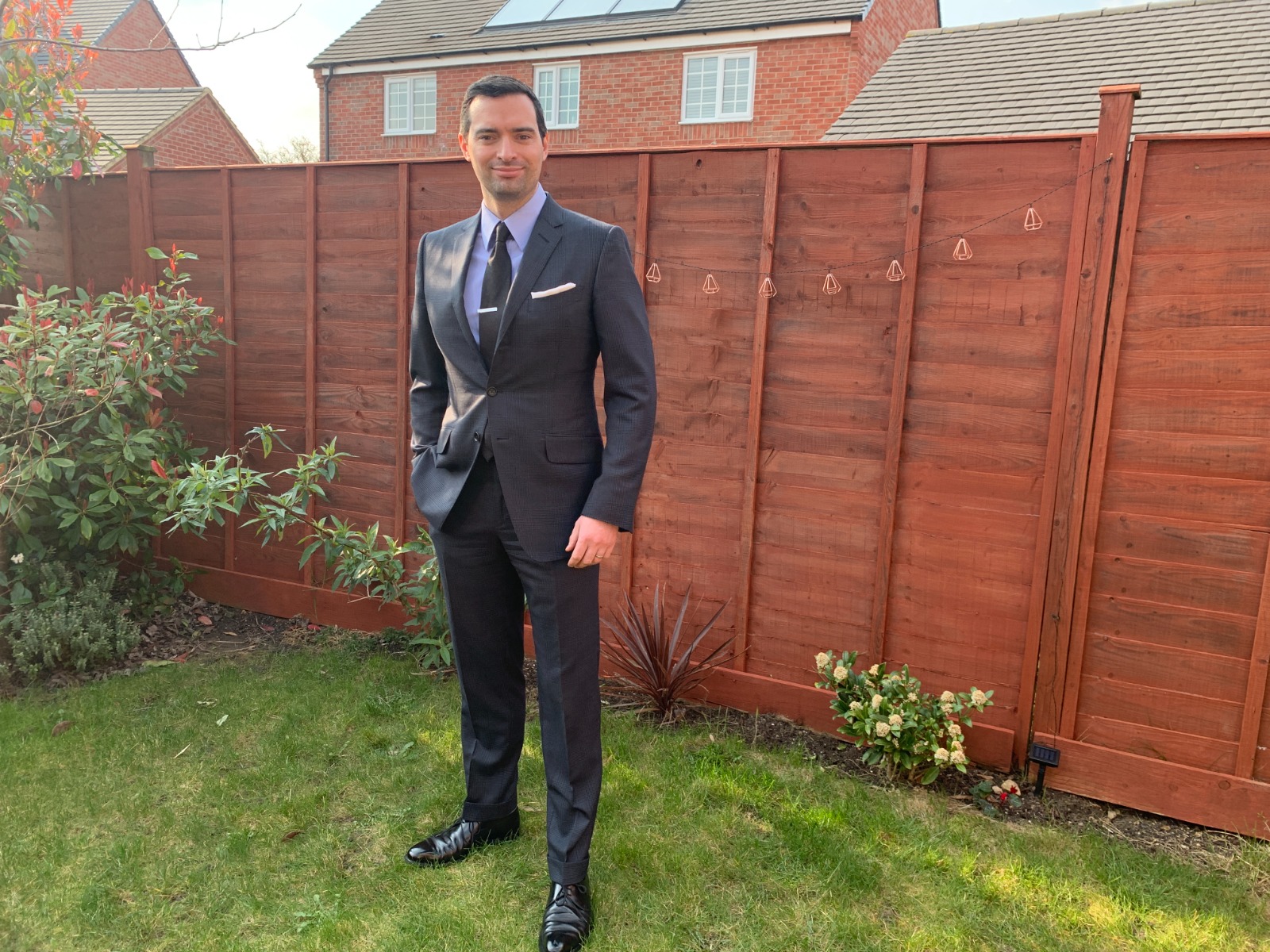 The last suit James Bond ever wears (in this incarnation) was this TOM FORD black and Navy Prince of Wales check suit, which he wears with a TOM FORD blue shirt with a point collar and cocktail cuffs, a navy Prada tie (identified by Z), a Benson & Clegg rhodium plated tie slide, Crockett & Jones Highbury shoes in black and Barron Perreira Joe sunglasses.

In 2019 I contacted TOM FORD to see what would be in the London store as part of the James Bond collection, but it wasn’t until early March 2020 that I got a response.

I was interested to see the shirts, ties, and sunglasses (this was an assumption at the time based on previous movies). I was told no sunglasses this time, but was sent images of all the shirts, ties and suits that were included in this range.

Of the three suits that were sent over, I was really intrigued by the Navy Prince of Wales Suit. I’d seen some photos of Bond in a blue suit, but in pictures that were sent over it looked grey. I had no thoughts on ever getting these suits, as they were out of my price range and instead concentrated on the shirts and ties. I had intended on viewing the collection in person, and was arranging a visit, but then the pandemic started! 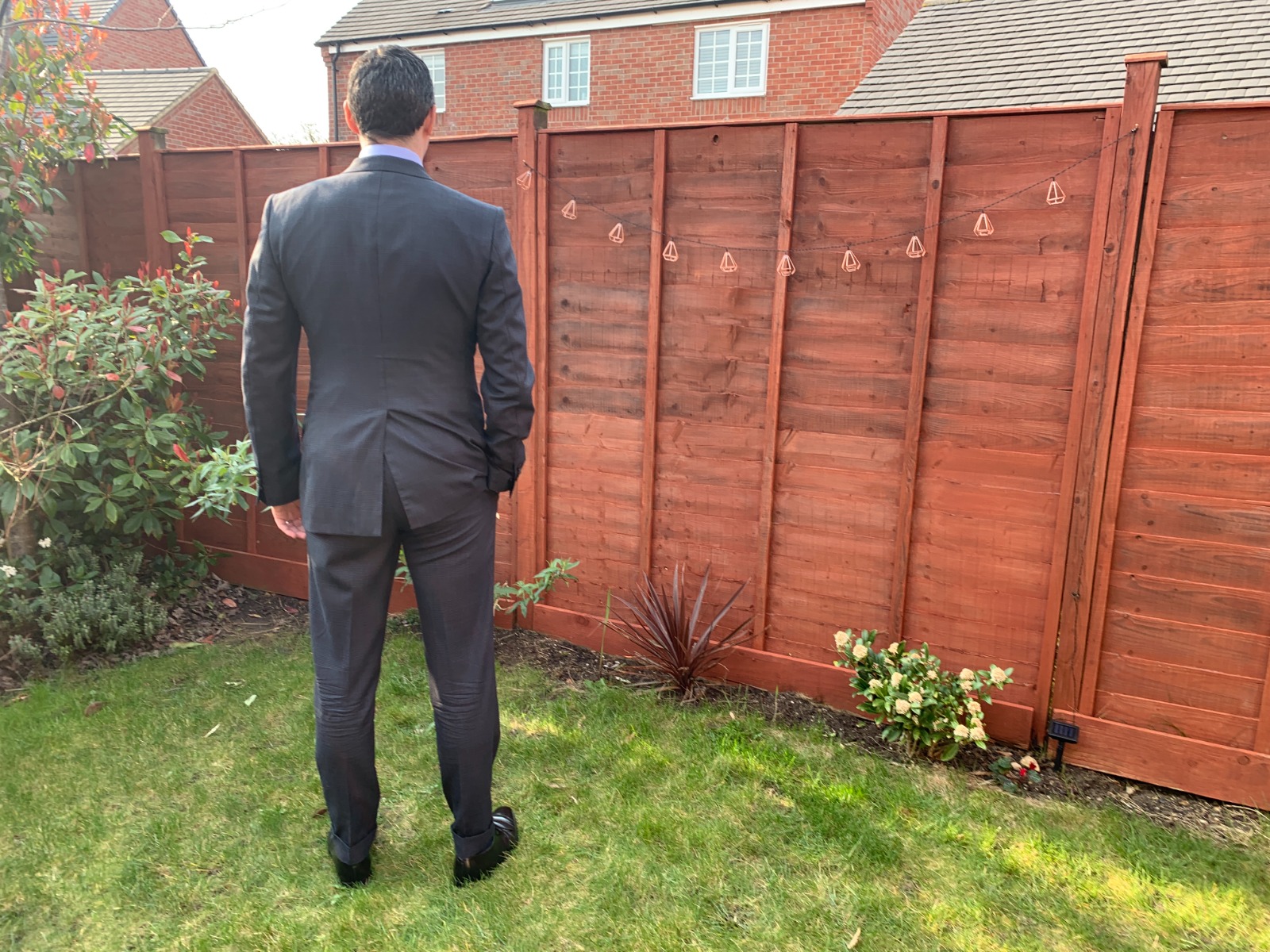 While I wasn’t allowed to visit London (or anywhere else, in fact no one could), about a month after this, David Zaritsky of The Boooooooond Experience (channelling how Pete Brooker says it) received a box of goodies from TOM FORD in New York to be able to review. One of these was the navy suit.

Depending on where David stood in the video, the colour of the suit would go from a dark blue to an almost a light grey.

I was interested in trying to get a fabric swatch to have a similar style of suit made, so I reached out to David, who was kind enough to send some photos to me while he still had the suit. However, all the photos he sent showed the suit as being a light blue grey. Even he said that the photos did fool you a little, but in person it’s more of a navy. It’s not a suit that photos well to get its true colour. 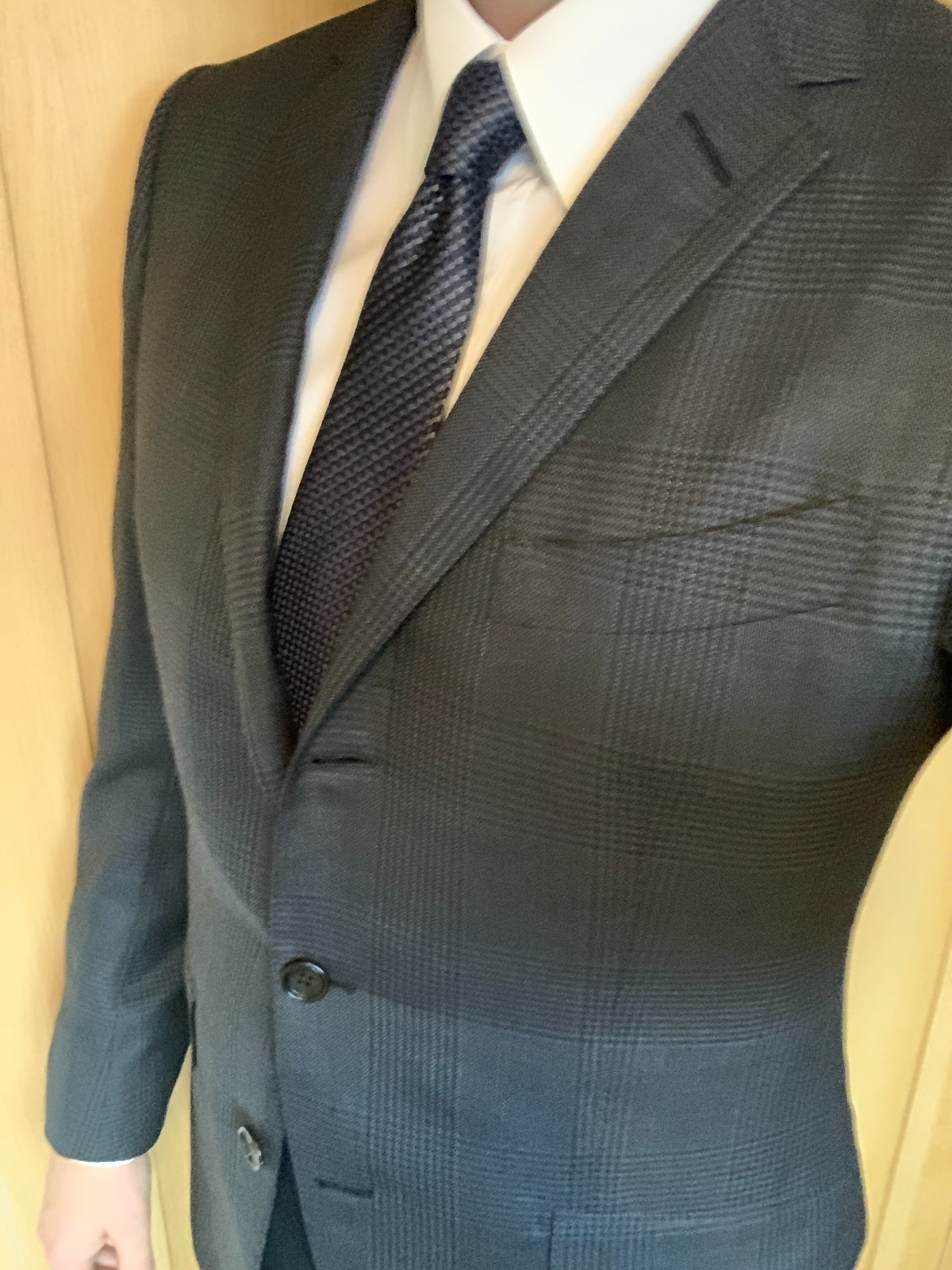 Having had several delays to the movie, a lot of the clothing items had now gone into sales, and I’d been fortunate that I’d been able to get a lot more than I was bargaining for. I was now saving to purchase the Omega watch. Every now and then I visit the AJB007 James Bond Memorabilia for Sale or Trade thread and look at the projects going on and items for sale. On this occasion I saw a TOM FORD Navy POW suit for sale in my size for around £1500!

I asked Z from TieAnotherDay if he would mind looking to see if the suit details matched with a suit that he had been looking at previously and had the details for. We had both seen the suit when I visited London and met up with him and Pete, and we both really liked the look of it.

Z was able to confirm this, so I went ahead with the private sale, this would blow what I had saved for the watch, but I was happy with this. The cuffs on the jacket hadn’t had the buttonholes cut, and the trousers were not hemmed which was ideal. Following the purchase of the grey POW suit, I had to have the cuffs shortened by TOM FORD, having the cuffs unfinished on this jacket would make the whole process easier. 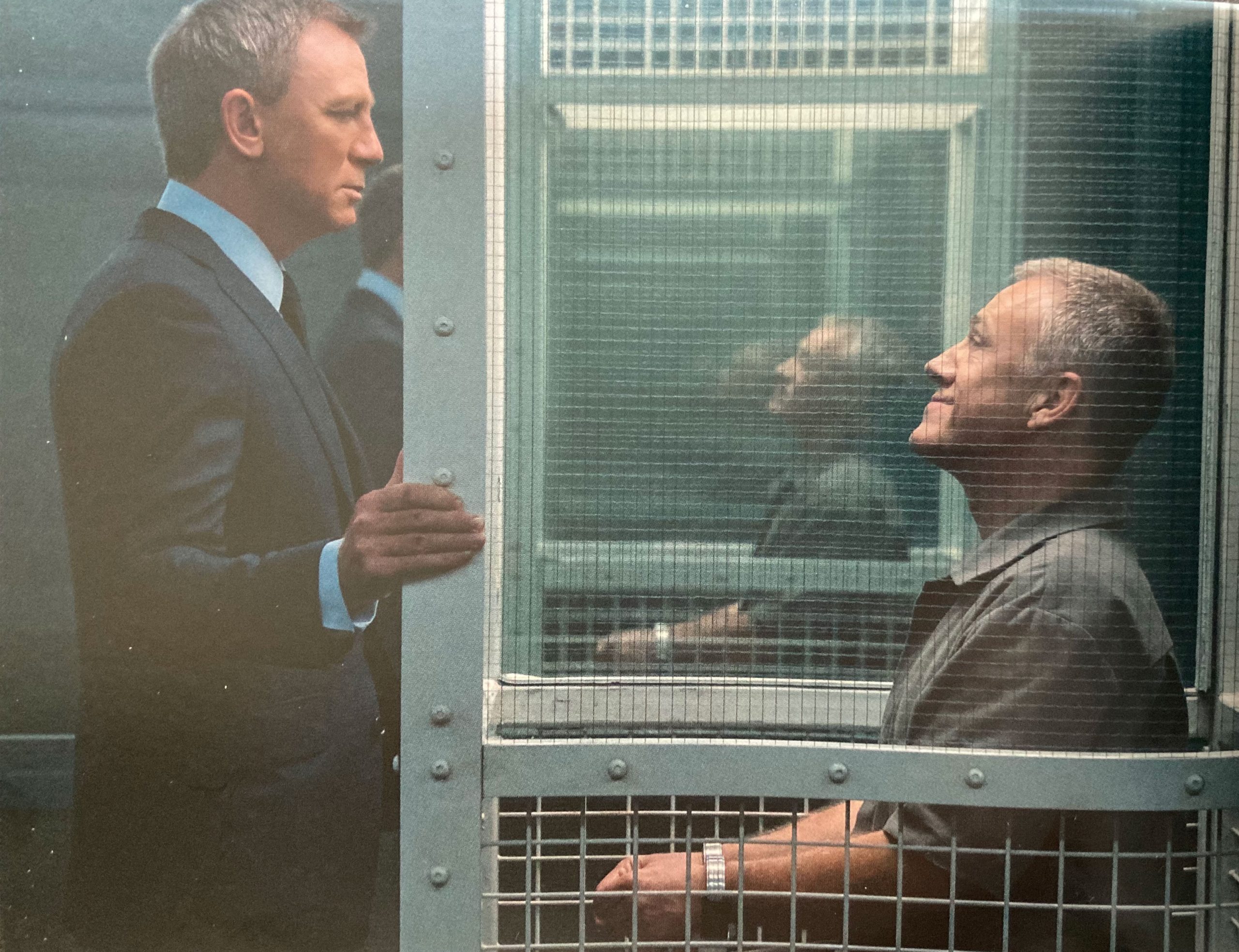 It took a while for the suit to arrive, it was coming over from Canada, so it did take a while. I also had to pay a customs charge which meant I had to pay an additional £400, which I sort of knew I would have to. The final price (sans alterations) was £1976, 54% cheaper than buying it off the rack from Mr Porter.

When I received the suit, I was really impressed, I had seen the suit in TOM FORD, but in proper daylight it is something else. It was September now, and I booked myself in to TOM FORD to get the suit completed for the day after the James Bond Premiere. I travelled to London, suited, and booted, carrying my Evening Suit, this suit and wearing my already altered Grey POW suit. 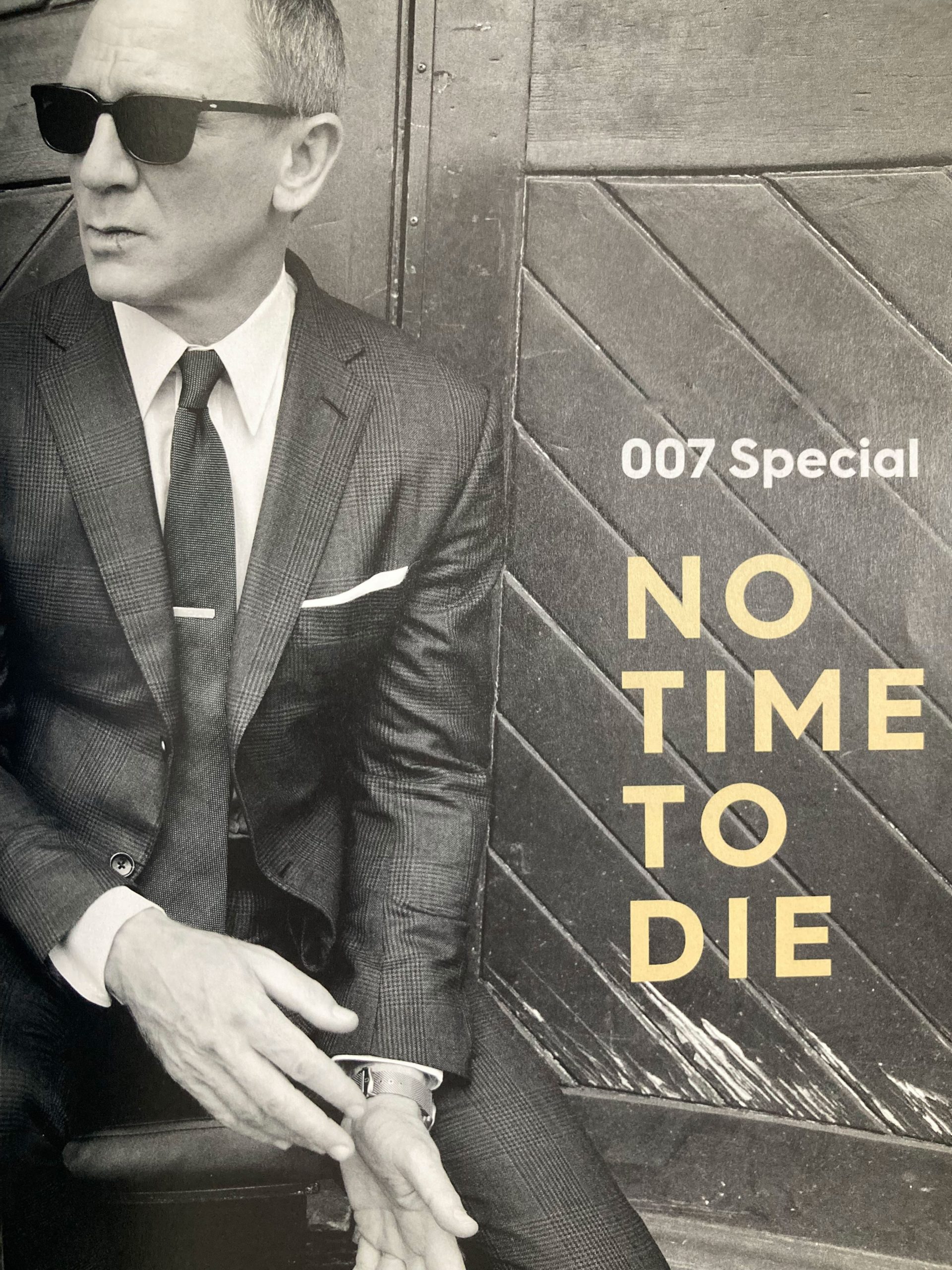 No Time To Die (2021) Photo sourced from the LFI catalogue

The day after I woke up early, having only had 4 hours of sleep, I was supposed to do a podcast with Pete. But I wasn’t in any shape for that. So, I tried to go back to sleep, but sleep wouldn’t come. I got up, showered, dressed, and went down for the hotel breakfast. I left the hotel early and walked back to the Albert Hall, and then onto TOM FORD.

In TOM FORD I was greeted by Aman, and one of their in-store tailors. They remarked on how well the grey suit was looking following its alterations. I got changed into the navy suit and they went about adjusting the cuffs of the jacket, asked how many buttons I wanted on them, and then adjusted the hem of the trousers to be turned-up. No further alterations were needed. I got changed, paid for the alterations, and left the suit with them.

I didn’t have to wait long before a large cardboard box turned up at my house. Inside on a mini rail in a grey TOM FORD suitor (which I didn’t previously have) and now on a wooden TOM FORD hanger (again didn’t have that before either) was my completed suit.

The suit jacket has a three-roll-two buttoned front, it has a single vent (I usually prefer a double vent, but this was already completed), notched lapels, the arms have a roped shoulders and the cuffs, now finished with 4 buttons on each, with the buttonhole closest to the end being slightly longer than the other three, as is tradition with TOM FORD suits.

The trousers have tab and bar side adjusters, two buttoned rear pockets, and turned up with buttons. This was a new one on me, but I just accepted it. I hadn’t realised they could be unbuttoned or rolled down.

The suit is screen accurate, to my size. The suit is a slightly tighter fit then those I have with Mason & Sons. When I wear it out, I try not to fill the inside jacket pockets too much, otherwise it does get a little too snug. The trousers feel good. I have room in them, and can adjust the sides depending on how much I’ve eaten that day.

I’ve worn the suit mostly formal with a shirt and tie, but I’ve also worn it with my mock neck jumpers from N. Peal and from John Smedley. 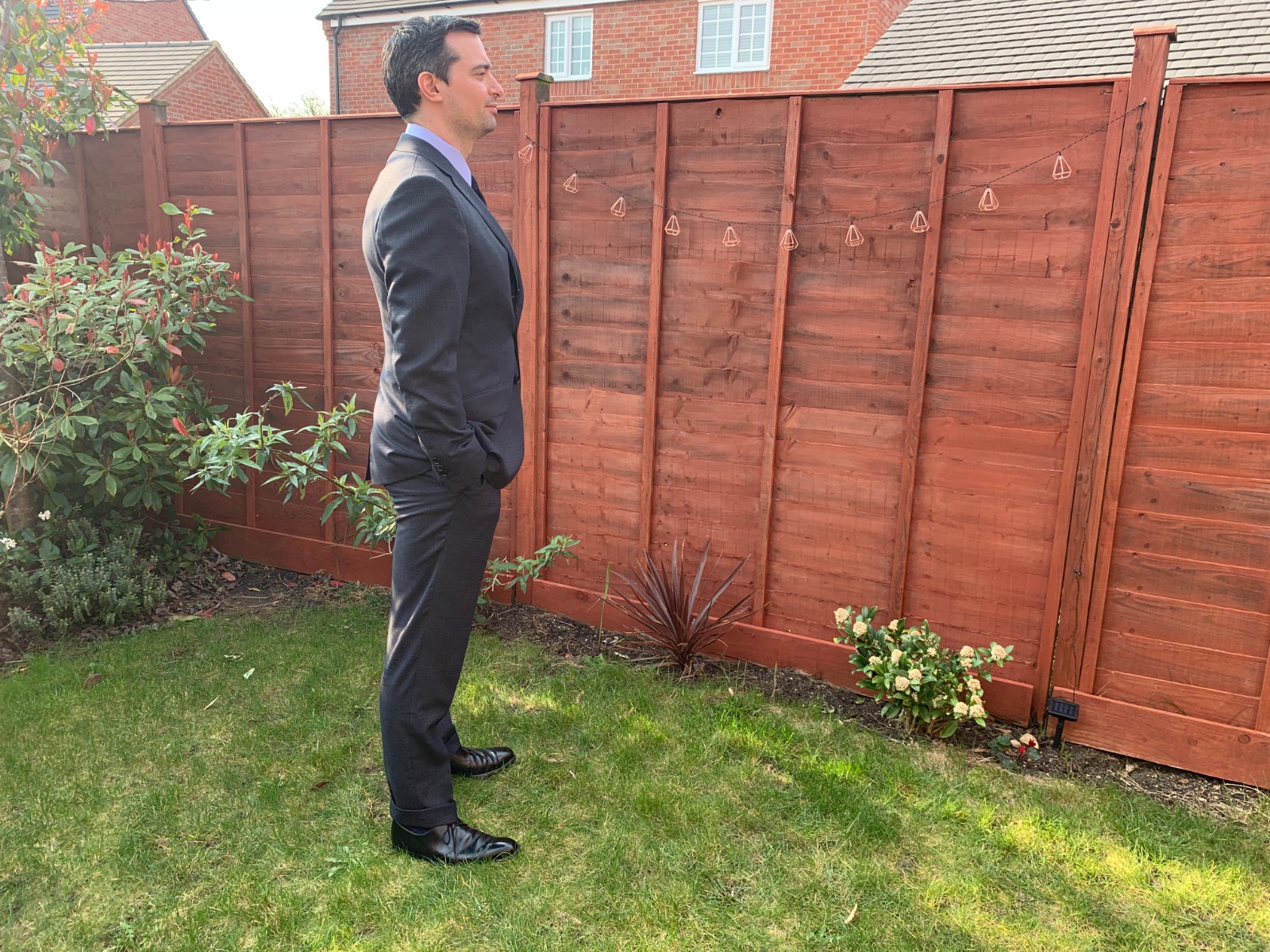 Make mine a double (vent)

I absolutely love the look and the feel of this Navy Prince of Wales suit. The colour of it doesn’t do it justice in the photos. The feel of it is so soft, although it has a very small amount of silk (6%) it does make a slight difference compared to the grey POW. It also has a larger check pattern, but somehow more subtle from a distance.

I’ve had several opportunities to wear this suit, at work and for a few dinners as well. It always makes me feel good, I stand up a little straighter, feel confident in what I’m doing. I cannot truly express how this suit makes me fell. If I was able to have this suit made for me, the only change I would make would be the single vent in the back, I prefer a double vent, and maybe not so snug in the jacket.

I had never planned or intended to get one, let alone two TOM FORD suits, and from the same movie. I have been extremely fortunate to be in the right place and the right time to get them both and realise this probably won’t happen again.

Out of the two O’Conner suits in No Time To Die, this Navy Prince of Wales one is my favourite. It’s the way this suit looks, it’s so hard to pin it down, blue, navy, blue grey, even black according to the Mr Porter description. I’m not the only one to think so, the aforementioned Z from @TieAnotherDay has been interested in this suit for quite a while as well.