I wanted to share some timely thoughts and photos on the red carpet premiere for No Time To Die. 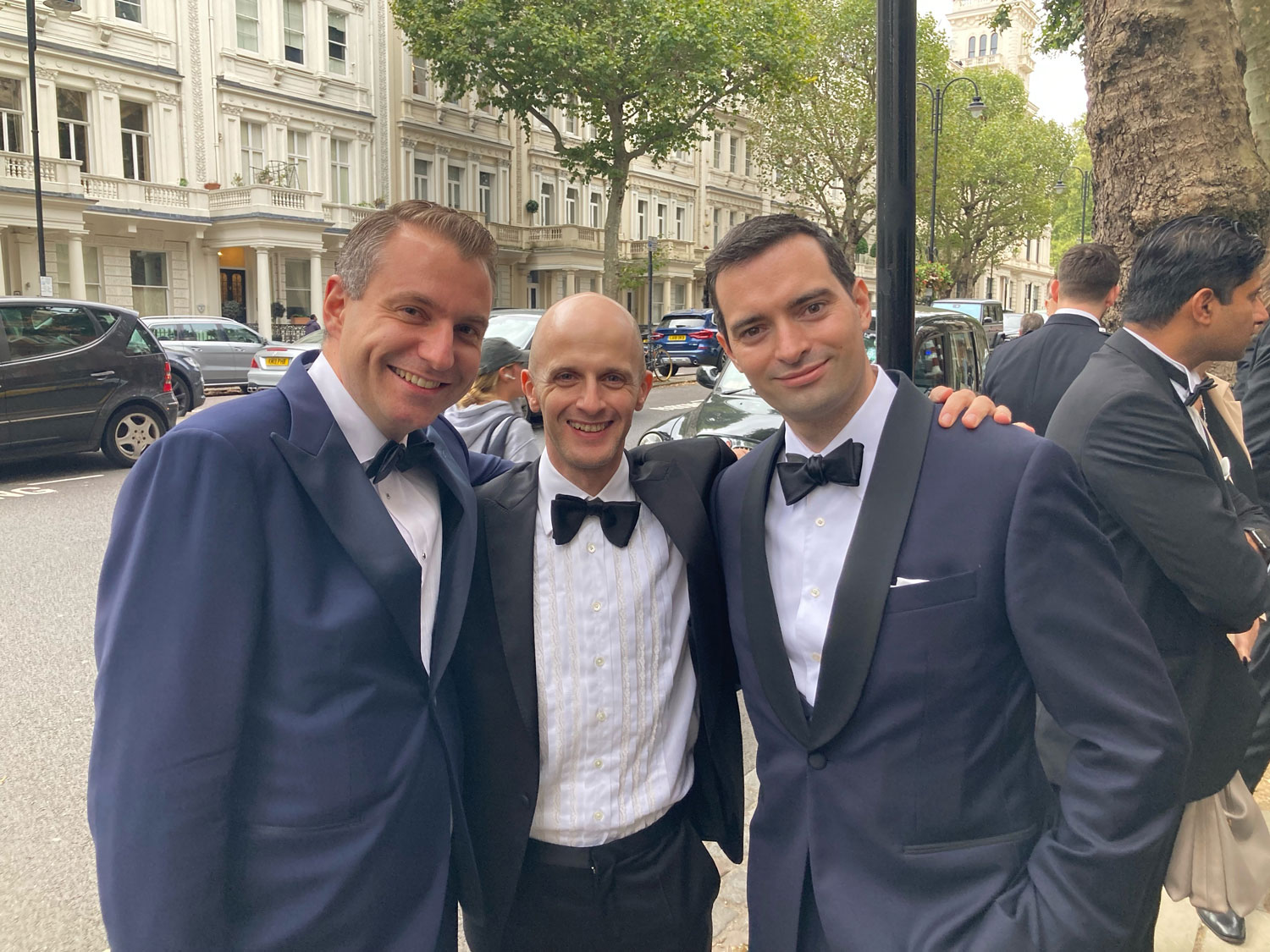 Remmert Van Braam of Bond Lifestyle called and said he had a spare ticket for the No Time To Die premiere. His wife Jess was not coming and would I be interested. It was the sort of message that I was praying for, as the box office had sold out in minutes and I failed to get one.

He said he wanted to give it to someone who would appreciate it. In return I offered him a place to stay whilst he was in London. Of course I wanted to pay him for the ticket also but he flatly refused. He is the real deal Remmert and we had great fun during his stay at mine.

I was fresh back from the Viva Mahr clinic in Austria, in fact when I got home, Remmert had already made arrangements to access the flat via my cat sitter. 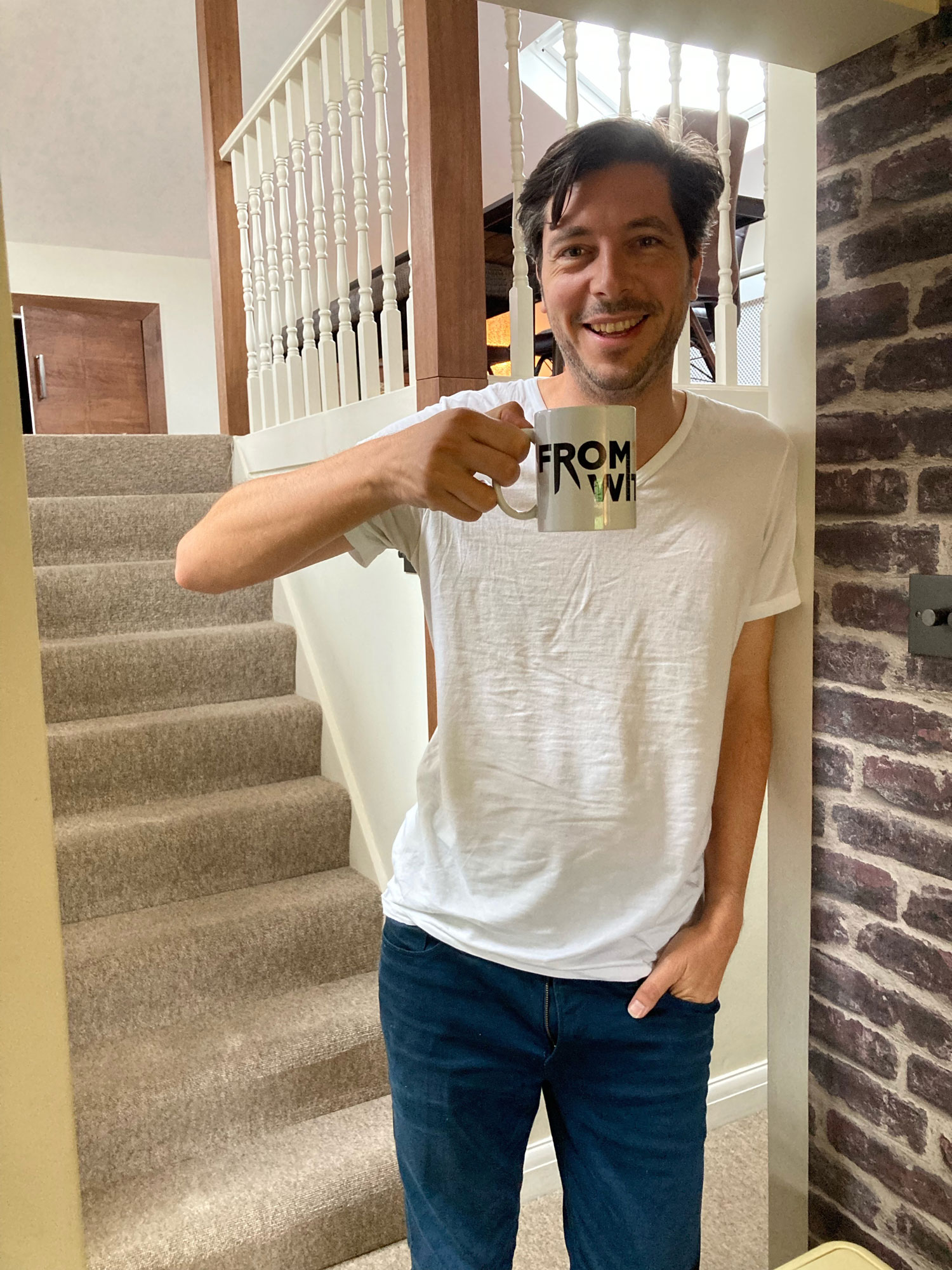 Remmert of Bond Lifestyle enjoying a brew at mine.

We enjoyed very healthy breakfasts, courtesy of some of the produce I had brought back from the clinic. Anastasia had agreed to give us some space to do our Bond thing. She took Roger to her place in Marble Arch and that suited everyone and that gave us more space and crucially, more licence to have a guilt-free Bond week. Anastasia would say ‘you go off and have a week of boondoggles, it’s fine.’

She was always great in that regard. Anastasia would never complain about being left out, or being sidelined. But after all it was a rare event. The Bond community hadn’t had much to celebrate in the 6 years since Spectre. 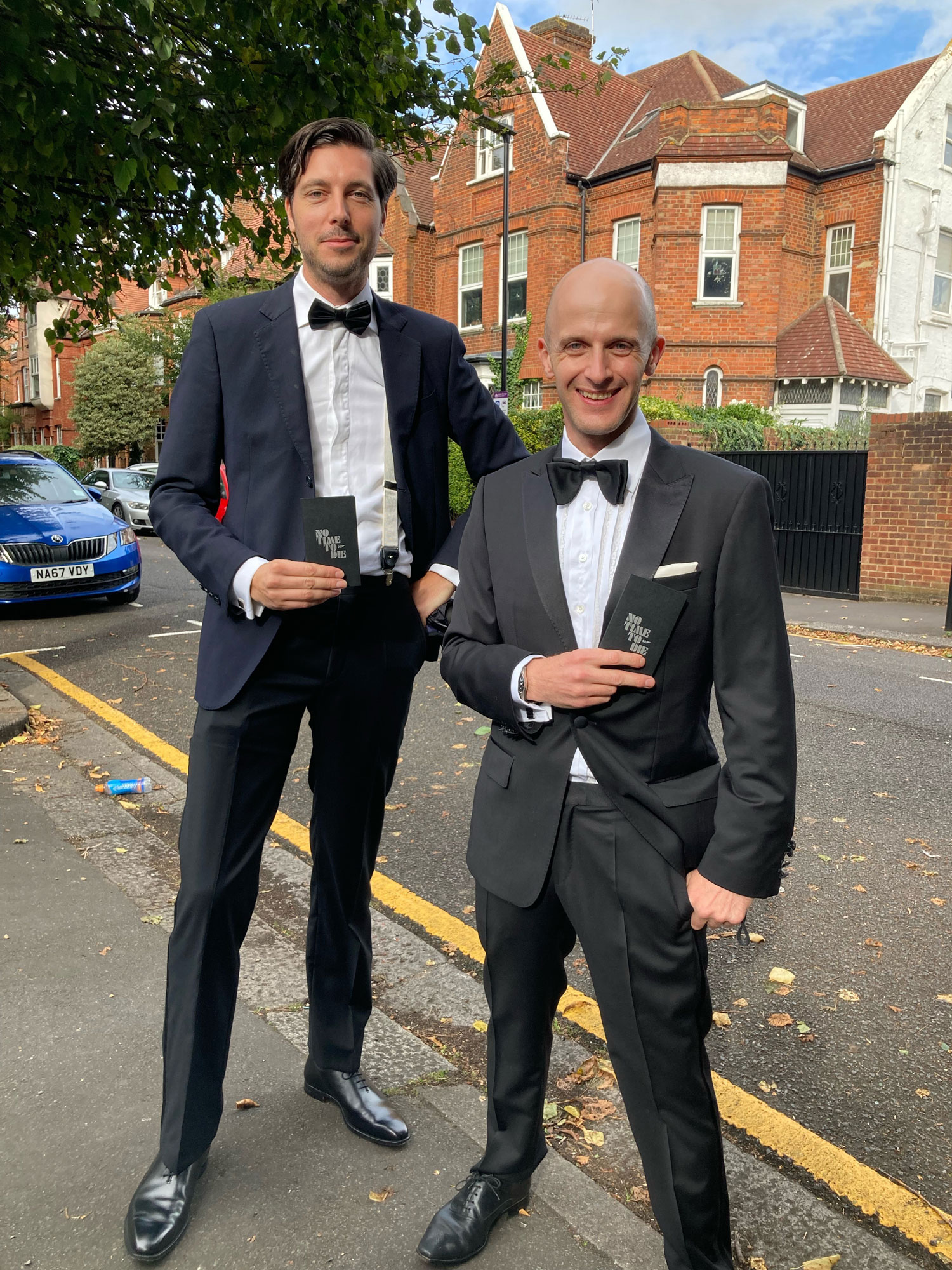 I wore my Frank Foster pleated dress shirt modelled on the one Lazenby wore in the pre-titles to On Her Majesty’s Secret Service. I paired that with my Hugo Boss Tuxedo I was gifted many years ago for a GQ event.

The tuxedo was ready to wear and has never really looked like it belonged on my body. But because it only makes an appearance every couple of years, I can’t justify the expense of getting it tailored. Which is shameful. 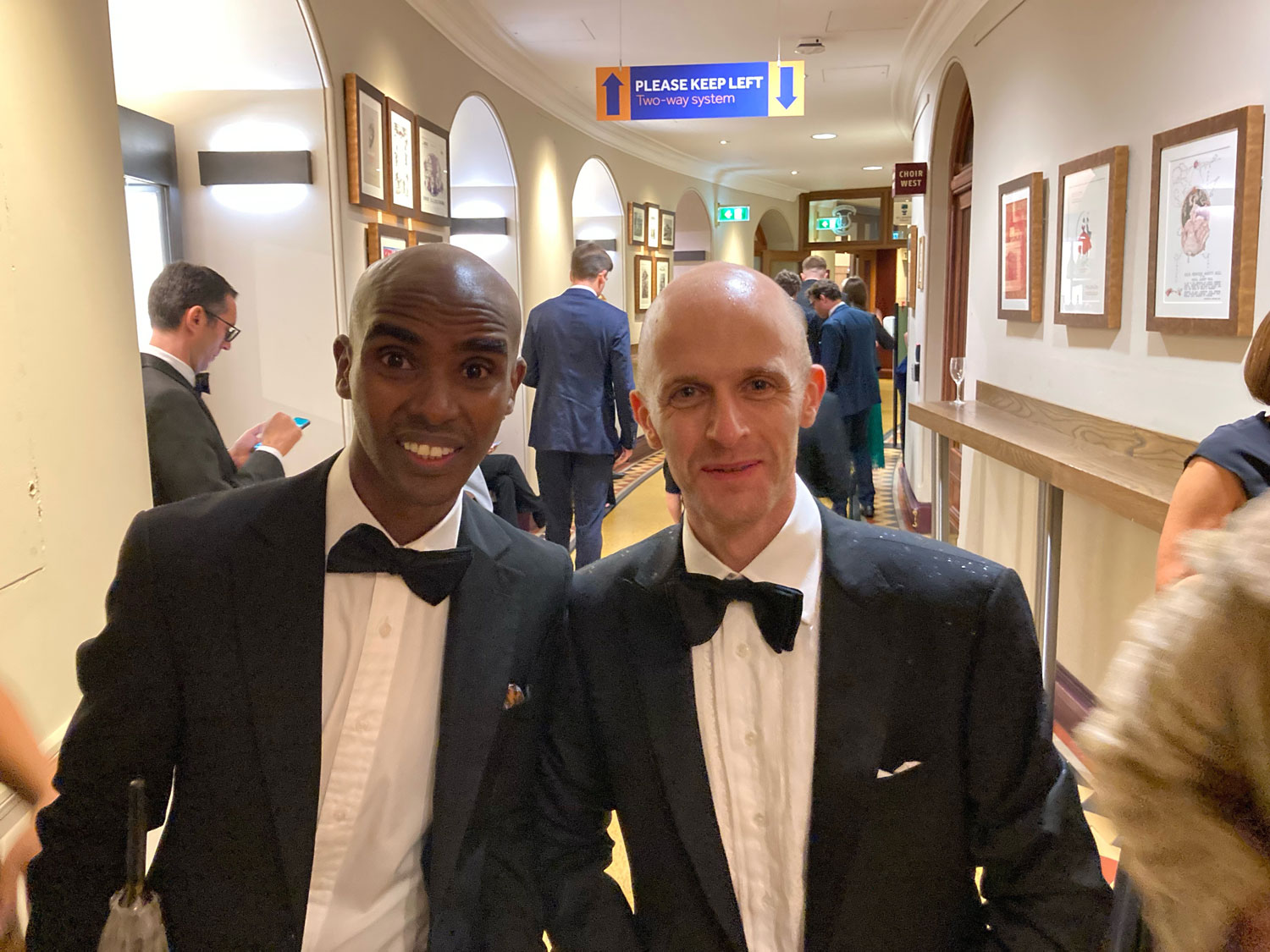 I was very anxious when I got to the Royal Albert Hall. Since I got offered the ticket by Remmert, I thought how am I going to sit through 3 hours without wanting to pee? And then what if I’m stuck in the middle and can’t get out or back in.

It’s crazy but these are the biggest thoughts I have going to any event. It’s an unusual paranoia of being trapped in a scenario where I can’t get easy access to an exit.

I only have these moments at the theatre when watching a film, a play or a ballet. Being crushed tube train which was an every day occurrence when I lived in East London was not a problem for me. 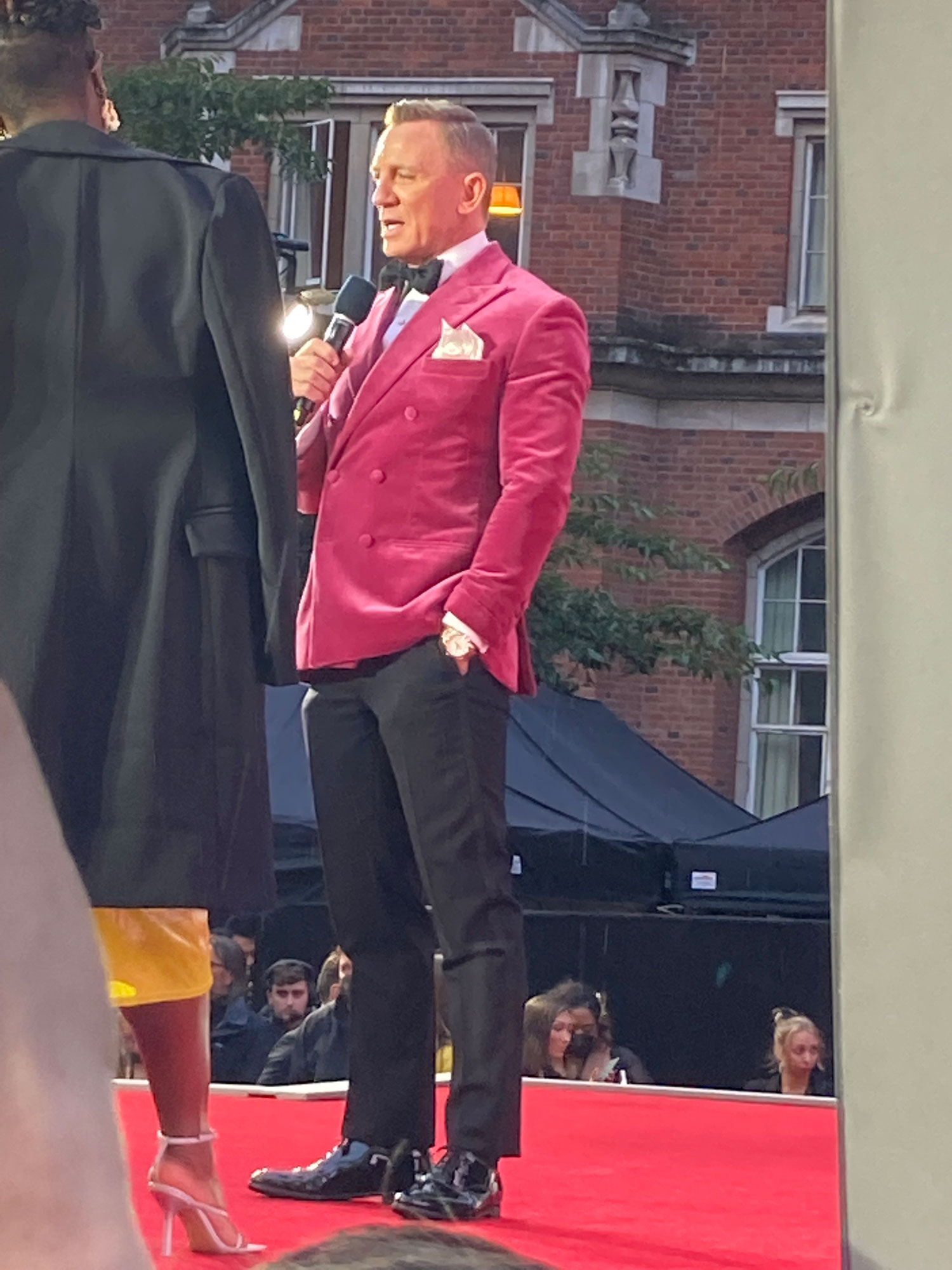 Daniel Craig being interviewed before going in.

But I can never fully relax in a theatre unless I have an aisle seat. When I was younger I went to see a play with my Brother in London. A one man play about the life of Alex Higgins. We travelled down from Huntingdon, it was a present from our parents. We booked hotels, went for dinner, but because I was sat dead bang in the middle of the auditorium, I lasted 2 minutes before I got up and walked out.

I’ve since learned to cope better with this strange niche anxiety. I don’t drink which helps. I focus on my breathing if I feel waves coming on.

And I also break down uncomfortable passages incrementally. ‘Just make it to the title sequence’ I would tell myself. ‘Do another five minutes, don’t get out of your seat for another five minutes.’ After 20-30 minutes I no longer thought about it, and I mentally unclenched. 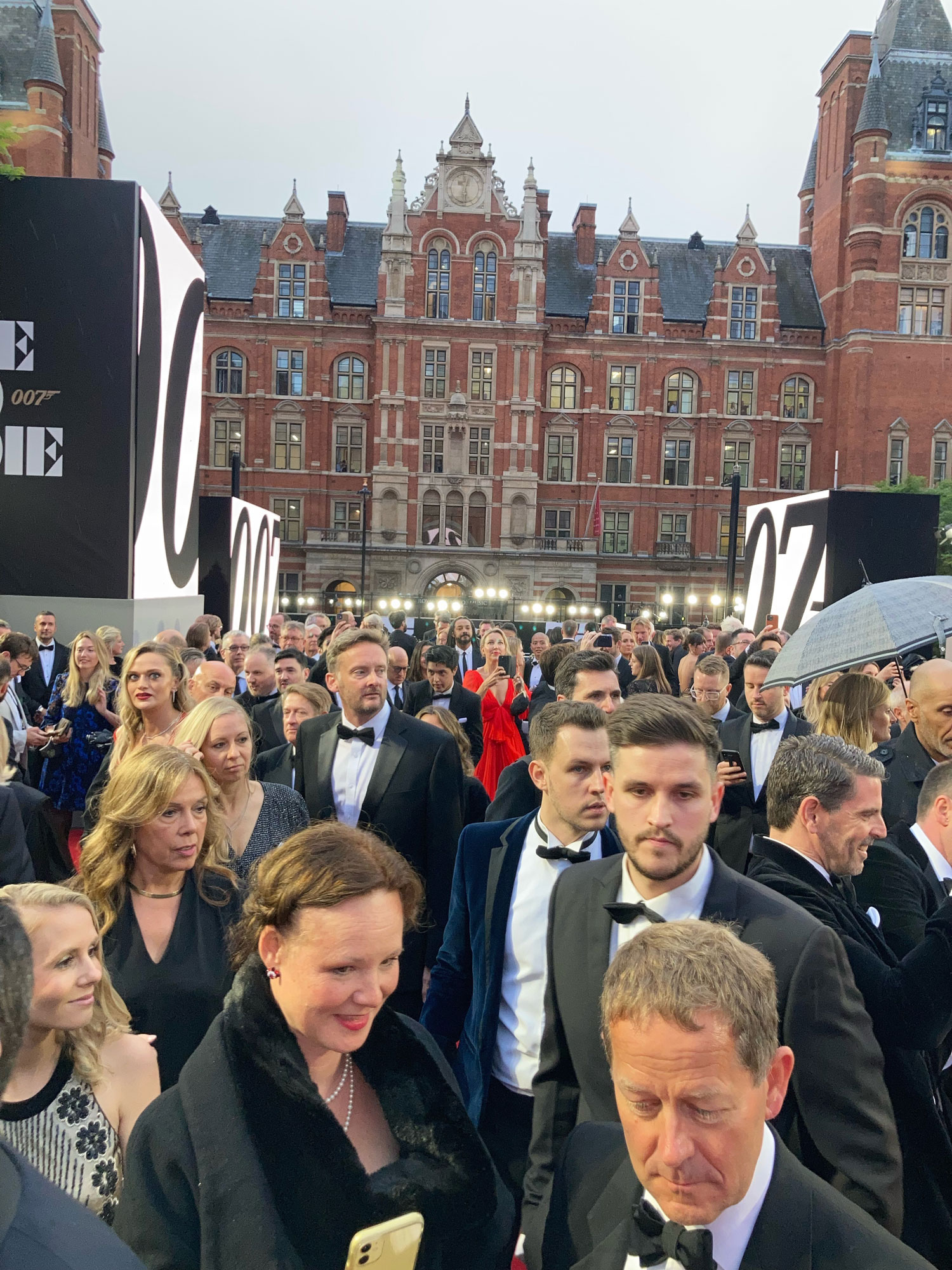 The showing was at 7.30pm, and I purposely didn’t consume any liquids from noon that day. I wanted to be completely dehydrated before going in so I wouldn’t feel the need to get up and pee. And it worked. It worked so well that I didn’t need to pee until I got home later that night around 11pm.

The most memorable moments for me in the premiere was the producers Barbara Broccoli and Michael G. Wilson introducing the movie on stage. Barbara went off script and interrupted a speech from Michael, and thanked him for being a wonderful producer and an even better Brother. I thought it was very touching seeing that and it got a huge applause. (You can watch the YouTube vid below to see that moment). 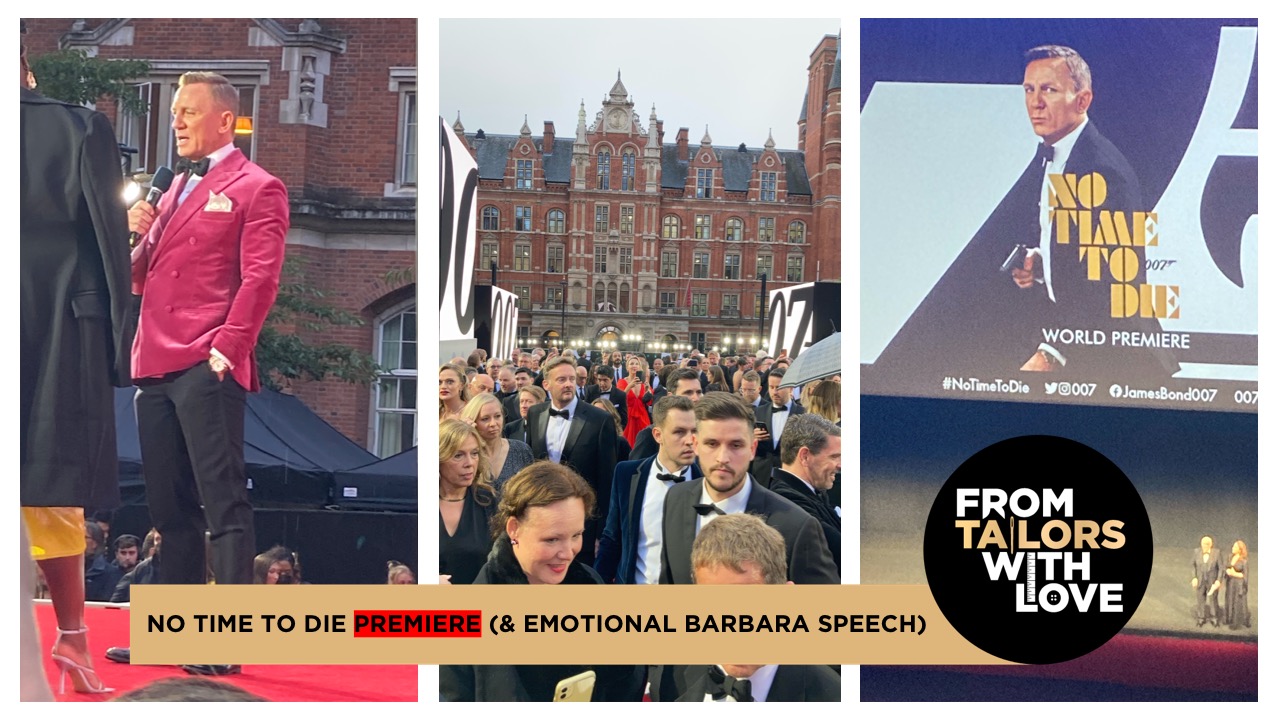 Keeping the British End up

A marching band played God Save The Queen, and I felt incredibly proud that this franchise was ours. We might be a nation with many faults, past and present, but Bond is ours. No question.

The director Cary Fukunaga introduced everyone out on stage and Daniel, in his pink Scabal cotton velvet double breasted Anderson & Sheppard dinner jacket, came out last and got an even bigger cheer. 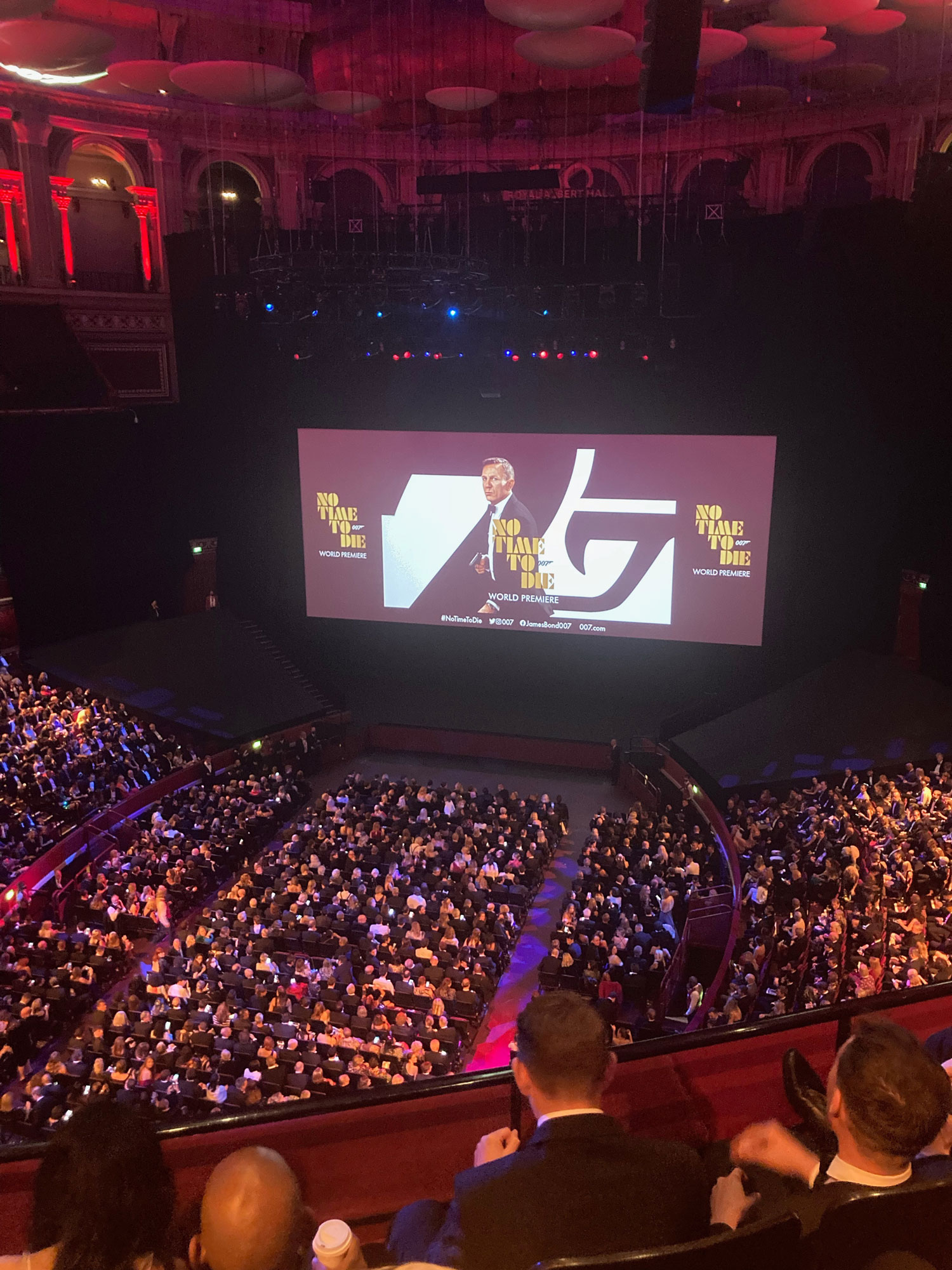 The film got many laughs, cheers and claps. None more so than by Marcos who runs the channel James Bond Brazil. I sat next to him and he laughed and cheered riotously at all the right beats. He was devouring popcorn and drinks, and he was so engaged with the film throughout, it looked like he was running in his seat.

I won’t spoil the ending here, many of you have seen it I’m sure and know how it turned out. I have shared some thoughts in a previous article if you’re interested on what I thought about the ending. 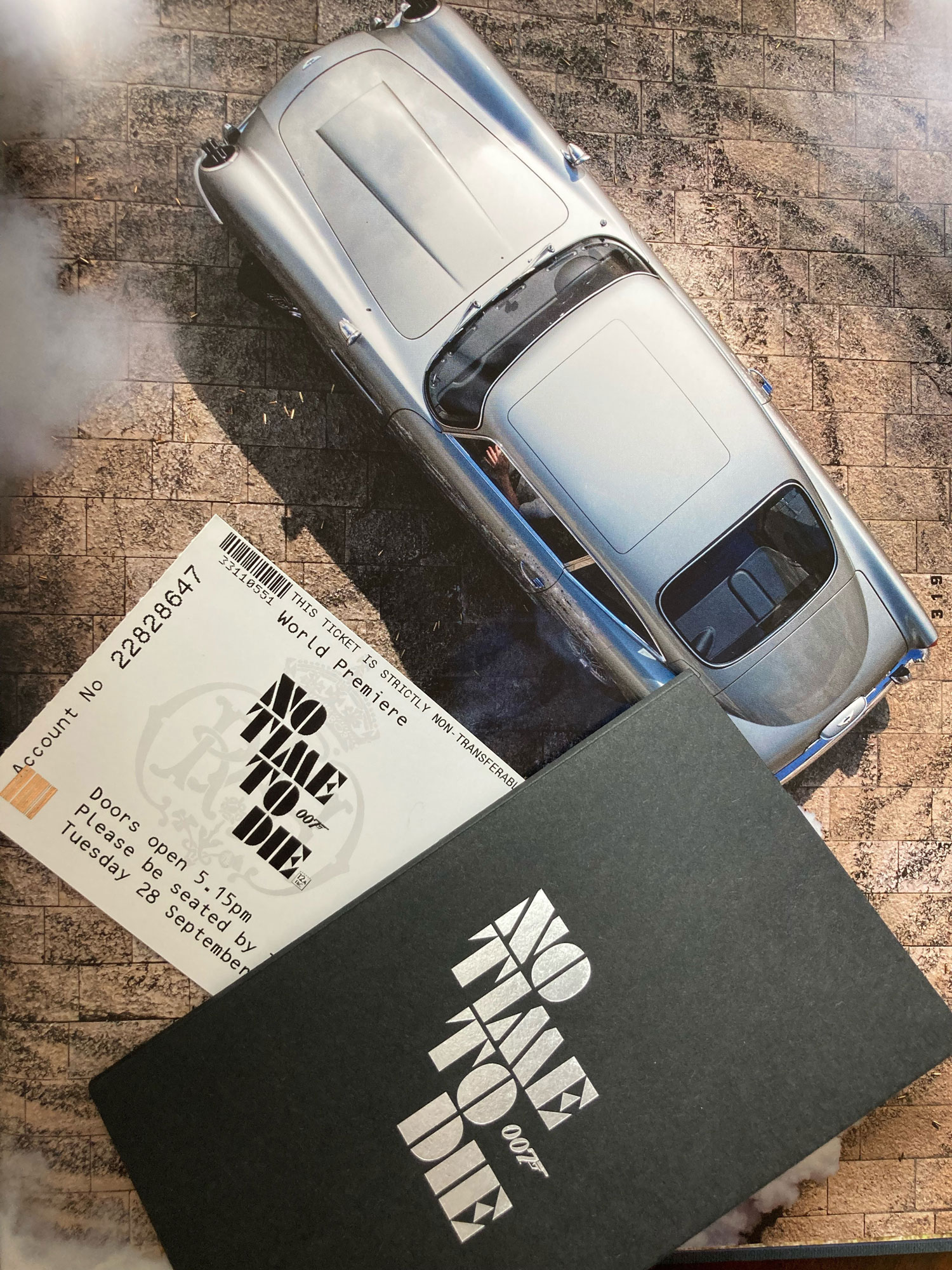 Let’s just say that when the credits rolled, I was not clapping. We stayed until the end, and then the infamous line sprawled on the screen, James Bond Will Return, and everybody cheered with relief. 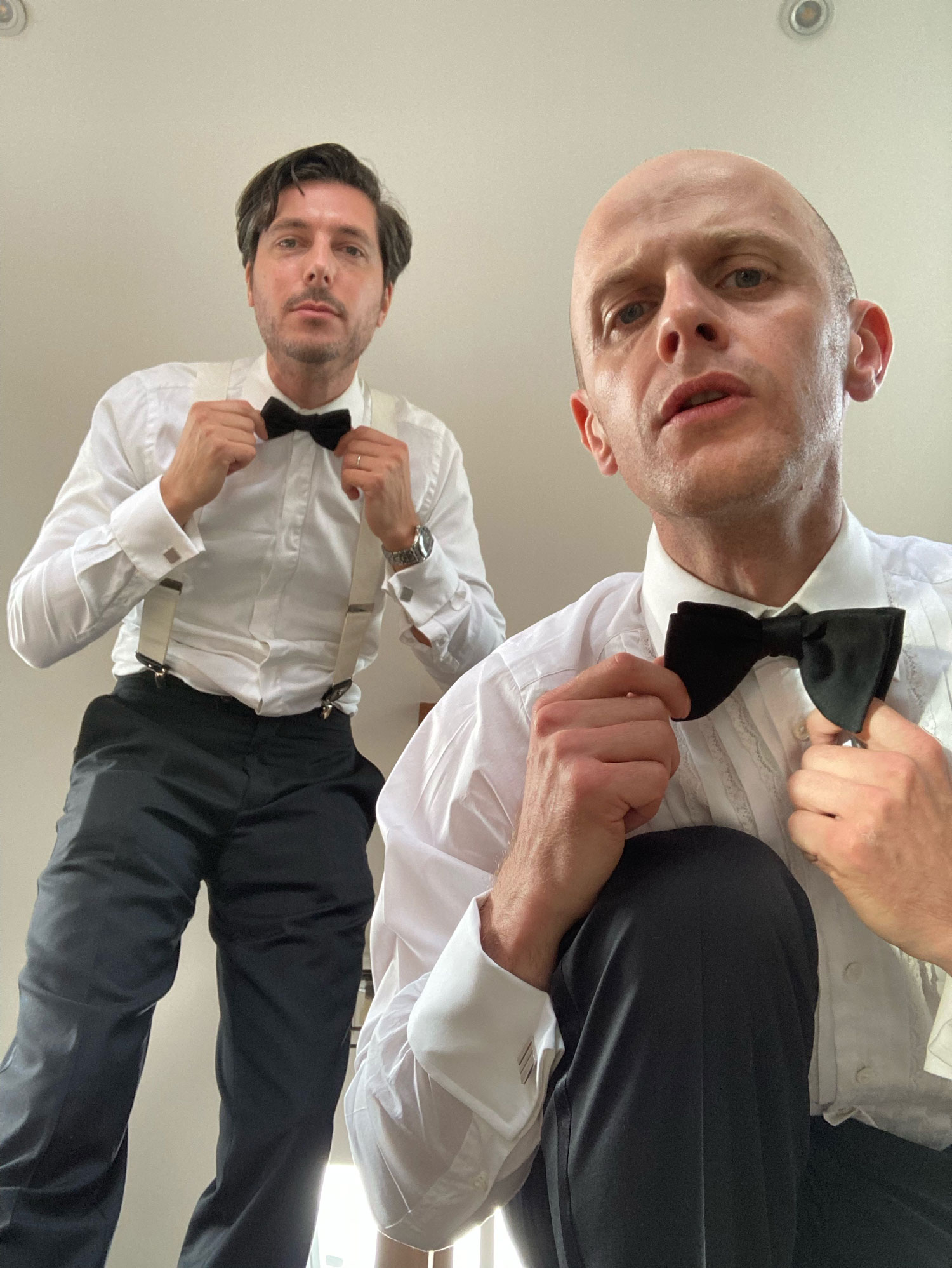 One for the coffee table. Royal Albert Hall: A celebration in 150 unforgettable moments.