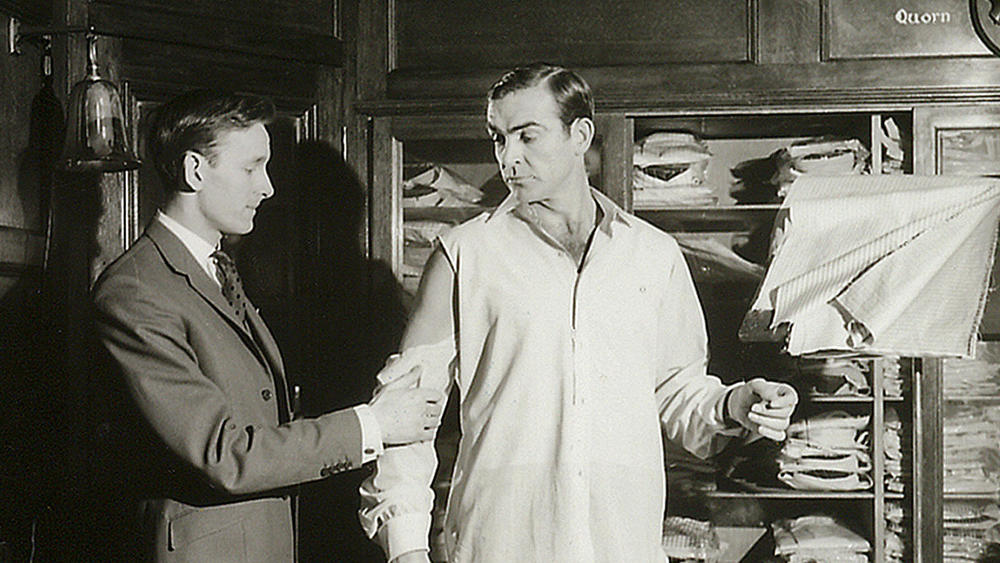 Connery being fitted for Turnbull & Asser shirts by Michael Fish

James Bond is a huge commercial commodity. Countries like Mexico pay SONY £20 million to rewrite passages of Spectre to give a positive portrayal of their country.

But what about the brands themselves? Heineken paid £45 million to be in Skyfall, even though Bond was drinking Heineken when he was a slump. What does that say about the image of Heineken?

You should only drink it when you’ve had a catastrophic fall from grace? How about the fact that you can buy an entire range of Bond aftershave? Perhaps slightly incongruous with Fleming’s Bond who never wore cologne.

In Fleming’s novel From Russia With Love, when Tatiana Romanova asks Bond why Englishmen don’t wear cologne since all Russian men do, he replies, “We bathe.” 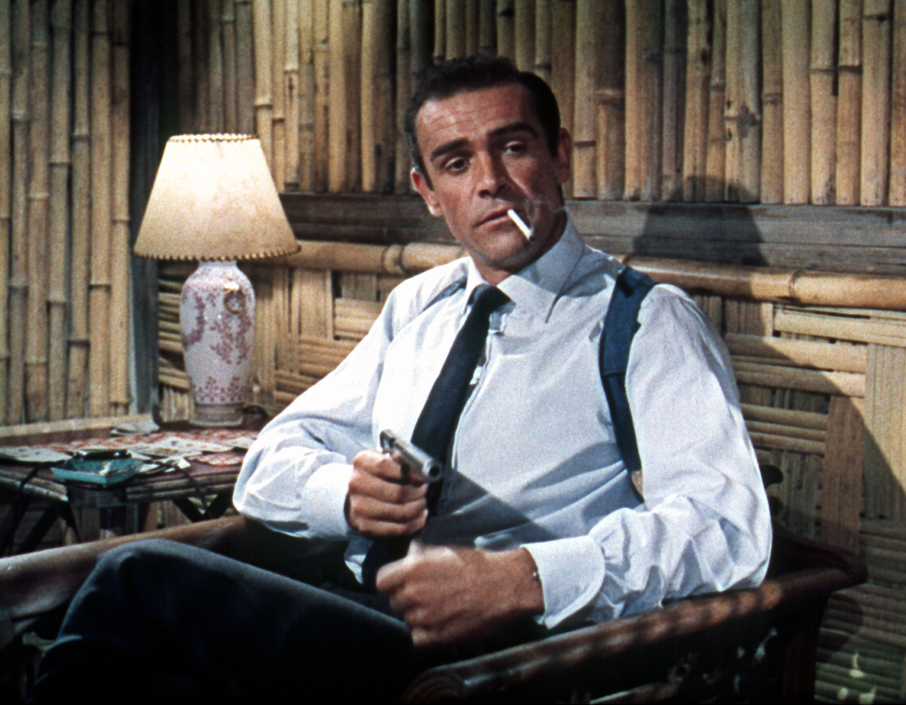 Don’t you want to know why?

So what exactly were the reasons behind the unconscious coupling (to quote Gwyneth) between Bond and Turnbull and Asser? Turnbull and Asser were there from the beginning, from Dr No up to and including Casino Royale.

The picture of Sean Connery being measured for Turnbull & Asser shirts can arguably be described as the eldorado picture of the brands family album. So what happened after Casino Royale? I spoke to Dean Gomilsek-Cole, Head of Design at Turnbull and Asser about many things, but have distilled the interview to this very topic. 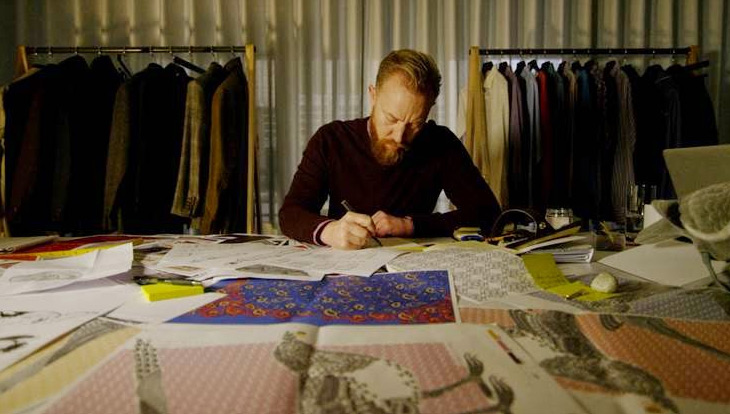 Turnbull and Asser are steeped in tradition, can you please tell me more about your relationship with James Bond? Who calls who? How did it all start?

Our relationship with the Bond Franchise began with Dr No in 1962. Terrence Young, the Director, had been a customer of Turnbull & Asser and was looking to turn a young Sean Connery into Ian Flemings image of Bond. The pale blue and white shirts in Sea Island Cotton that Connery wears are made more interesting with the famous 3 button cocktail cuff inspired by another T&A customer, David Niven.

We continued to work on many Bond films through the decades with Lindy Hemming. However, our relationship ended after dressing Daniel Craig in Casino Royale.

However we continue to work with Lindy as she consults on a number of movies and have become one of the go to brands for a number of wardrobe designers, most recently we worked with Arianne Phillips on The Kingsman film directed by Matthew Vaughn and are working with her for the sequel. 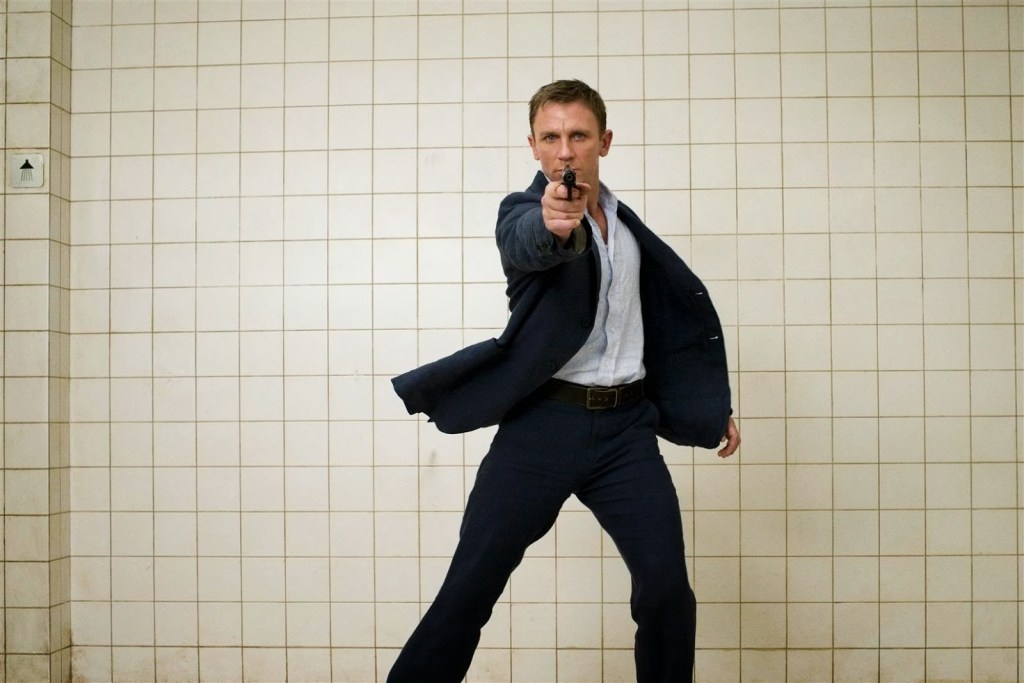 Is Daniel Craig wearing Turnbull & Asser shirts in the pre-titles?

SO WHO DECIDED ENOUGH WAS ENOUGH FOR THE BOND FRANCHISE?

It all came down to, T&A are an old school business, the way we work with customers is that we treat everyone with respect. Whether you are a film production company or someone that just walks in off the street. We are not in the business of being a charity. If someone said “we will put you in the film and you must give us everything for free”, we will say “we are one of the best shirt producers in the world, made in England and we don’t need to do that”.

It’s a big can of worms with product placement in films, we never advertised that we were in the Bond films it was only through imagery and word of mouth, we are humble as a brand. Now cinema is at the level where product placement is taking over.

People are noticing the car and the watch etc. Bond films are renowned for that so you can kind of ignore it. Ultimately it came down to not wanting to give stuff away for free, let alone even paying to be in the film. Our products stand up on there own and we don’t want to go down that avenue. –  Dean Gomilsek-Cole, (Former) Head of Design at Turnbull and Asser.

Update: Below is a quote from the marketing department at T&A. I’m unsure of it’s origin. It cannot be validated so please take with a pinch of salt.

“Being part of the Bond film history is a huge part of ours. We have always said we would make more shirts for the films if it was an option. Unfortunately, nowadays there are so many big brands that are willing to pay to feature in these iconic films; as a more traditional brand that has worked with a number of costume designers over the years and built great relationships, we prefer to have a mutual appreciation when we work with anyone.” – Jema Avedian – Marketing Controller at Turnbull & Asser