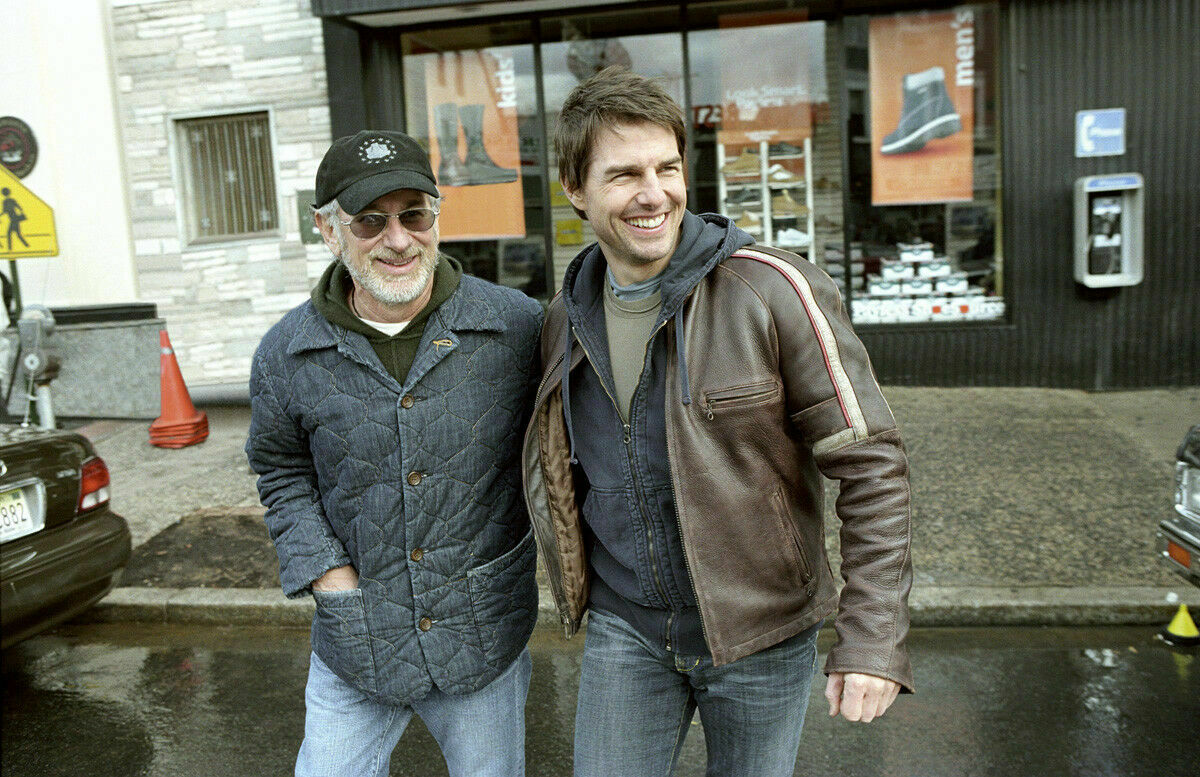 For the War of the Worlds (2005) Steven Spielberg would recruit Costume Designer, Joanna Johnston, to provide the blue collar look for Tom Cruise’s character, Ray Ferrier. Johnston had worked with Spielberg before on Indiana Jones and the Last Crusade (1989), Saving Private Ryan (1998), Munich (2005), and then consequently on War Horse (2011) Lincoln (2012) and The BFG (2016).

Previously she had also worked with Cruise designing the costumes for Cruise in Far and Away (1992) and would continue to collaborate on Valkyrie (2008) and Mission: Impossible – Rogue Nation (2015). 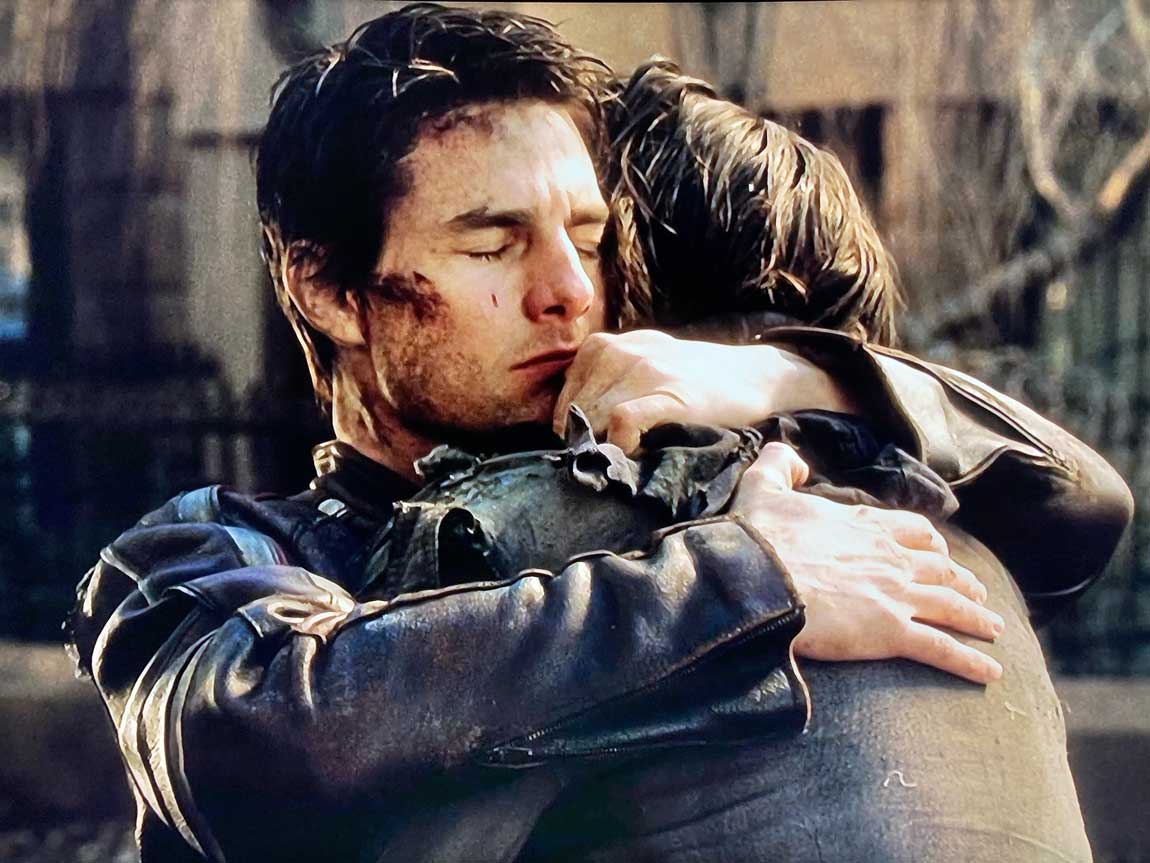 According to the production notes for War of the Worlds, Costume designer Joanna Johnston created 60 different versions of Ray’s leather jacket. Some were altered for practical purposes. For example, for one hero jacket the circumference of the sleeve was lengthened by a couple of inches.

This was to ensure the captives could have some purchase when pulling Ray from the clutches of an alien tripod. Also to emphasise the weathered journey of the character. Johnston explains:

“He begins with the jacket, a hoodie, and two t-shirts,” explains Johnston. “Then slowly peels them away until he’s left with just a t-shirt and jeans. To me, it’s like an old-fashioned hero emerging.”

In the making of documentary Johnston also talks about dressing the extras for large scenes. She says:

Servicing huge scenes with people in pouring rain – we bought a lot of those hot packs. […] and then we gave extras waterproof clothing underneath their costumes. They rise to it. 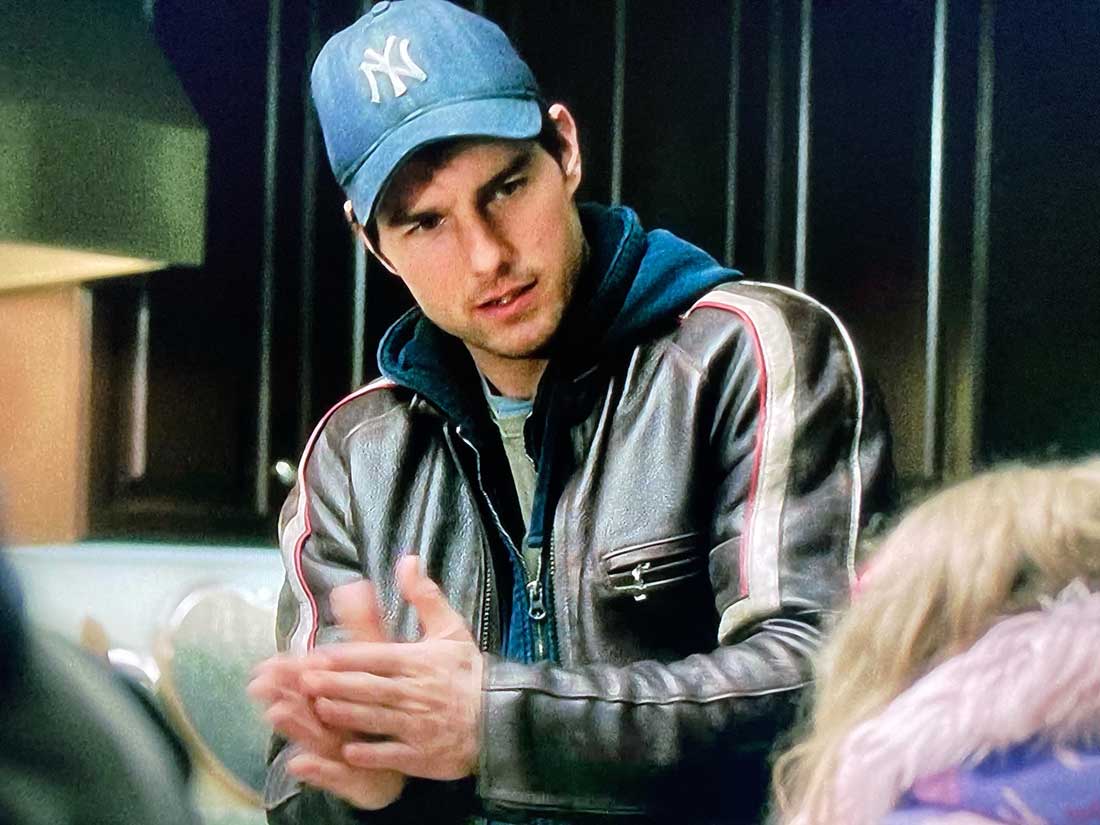 Who made the jacket?

Sources indicate that it was Belstaff who made the jacket and then released a limited edition run of the exact same jacket. It’s made of Bison leather which is thicker and tougher wearing. The jacket has an inner pocket along with the three outer zip pockets. There are adjustable zip closures on the sleeves and either side of the bottom hem. However, there are some areas of contention. 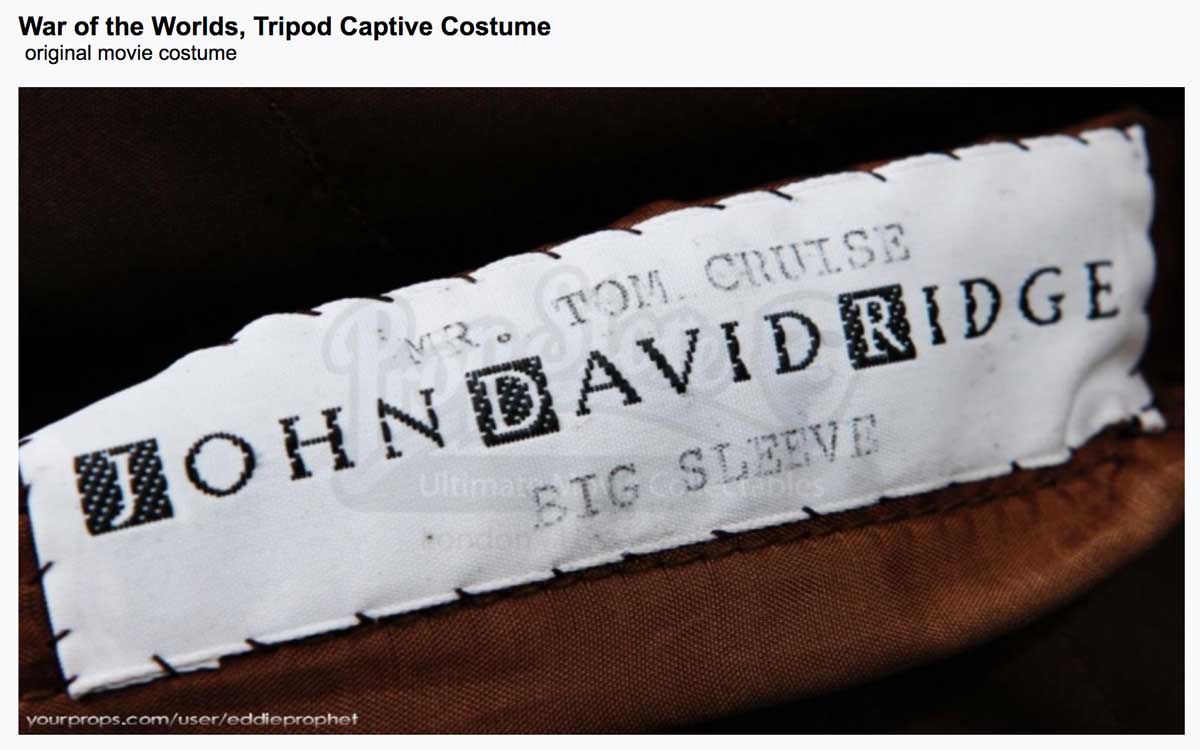 I’ve asked a separate source What’s Daniel Wearing on Instagram, who is normally offers great insight into these kind of things. I asked him who he thought made the jacket.

Tough one, either they (John David Ridge) made the jacket and Belstaff just recreated it or it is really Belstaff and he just [put in] his own label. I will say his pocket zipper is not Belstaff.

Note this blog is a work in progress and I have contacted various brands about their involvement to clarify a few ambiguities. I will update the blog at the footer should I hear back. If you have any additional insight on the costumes of War of the Worlds please get in touch, I’d love to hear from you. The jeans were made by Paper Denim & Cloth. Apparently, according to an article in the NY Times, they gave Tom Cruise 200 pairs for the film. The grey t-shirt by Juicy Couture. The navy knit hoody that Tom Cruise wears underneath the jacket has no designer label in it but WDW also thinks this could be a Belstaff crew hoody. However, the original sold at auction through the PropStore has no label indicating the brand, suggesting it could be custom made. 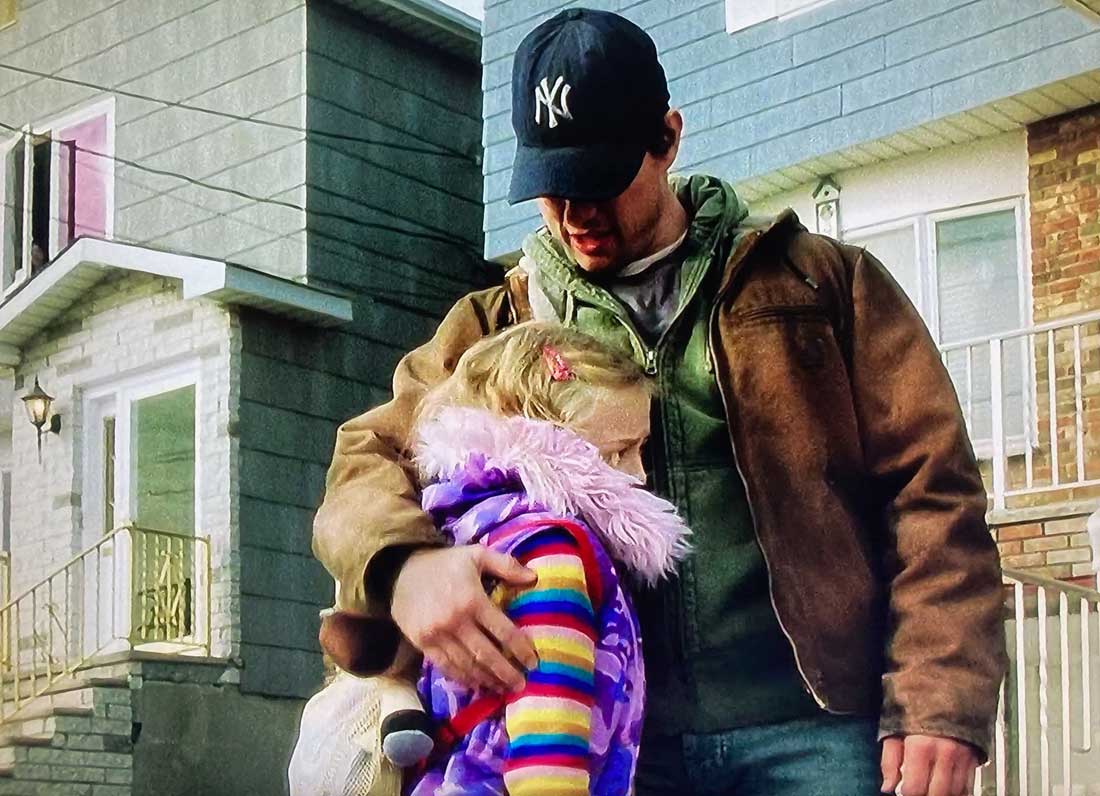 Cruise also wears a New York Yankees cap, which I thought might be a personal preference for Cruise himself. But Roland Hulme on instagram suggested.

Think this might be more of a character cue. Out here in New York a blue collar worker like Tom’s character would have his sports team on EVERYTHING. Yankees fans are obsessive. Same with the NY Giants.

We later see Cruise wear a New York Yankees hat in the movie Oblivion. Does Tom Cruise support the Yankees? According to Ranker he does. 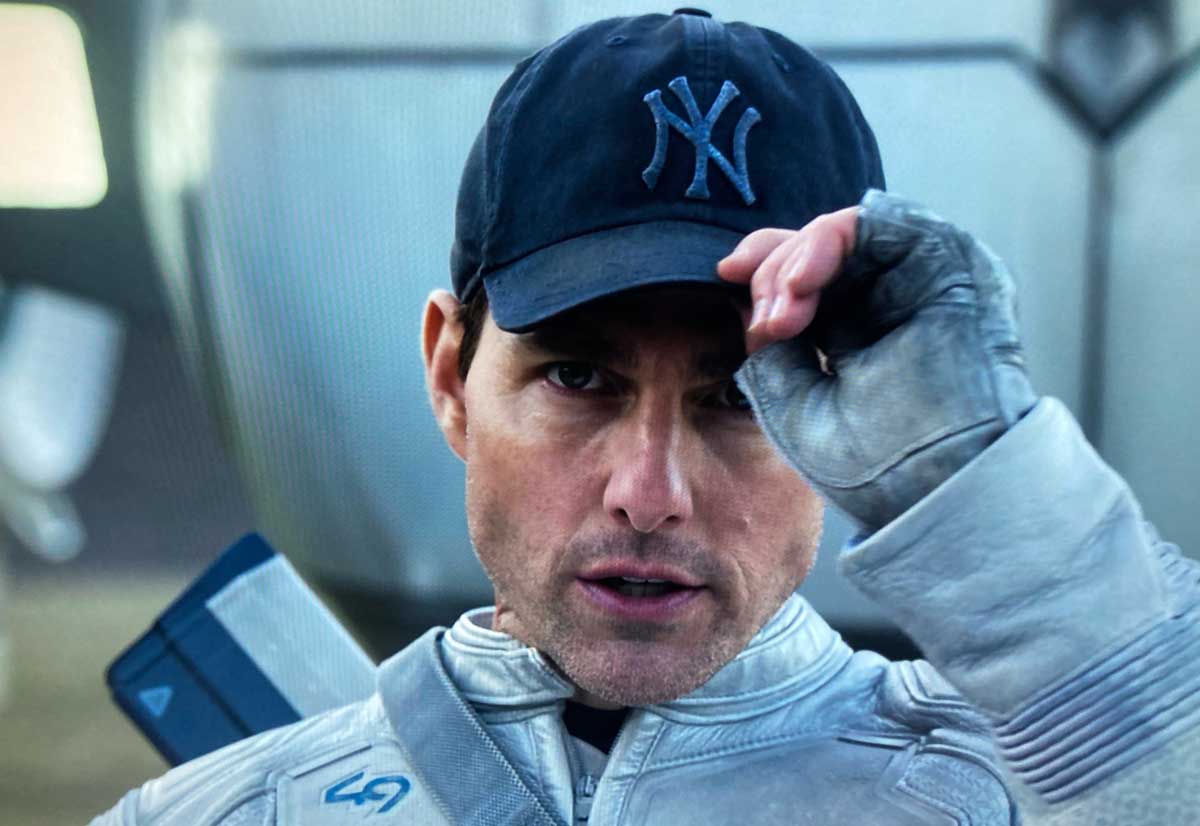 According to the website How to Dress Like That the watch Ray wears is a vintage Omega Seamaster Chronograph (Calibre 321). It’s interesting to note that this watch would be worth a small fortune and possibly not the sort a blue collar worker would wear ‘around the house’.

Perhaps the writers wanted the audience to know that the Electromagnetic pulse sent by the aliens affects all mechanical things, including vintage chronographs. 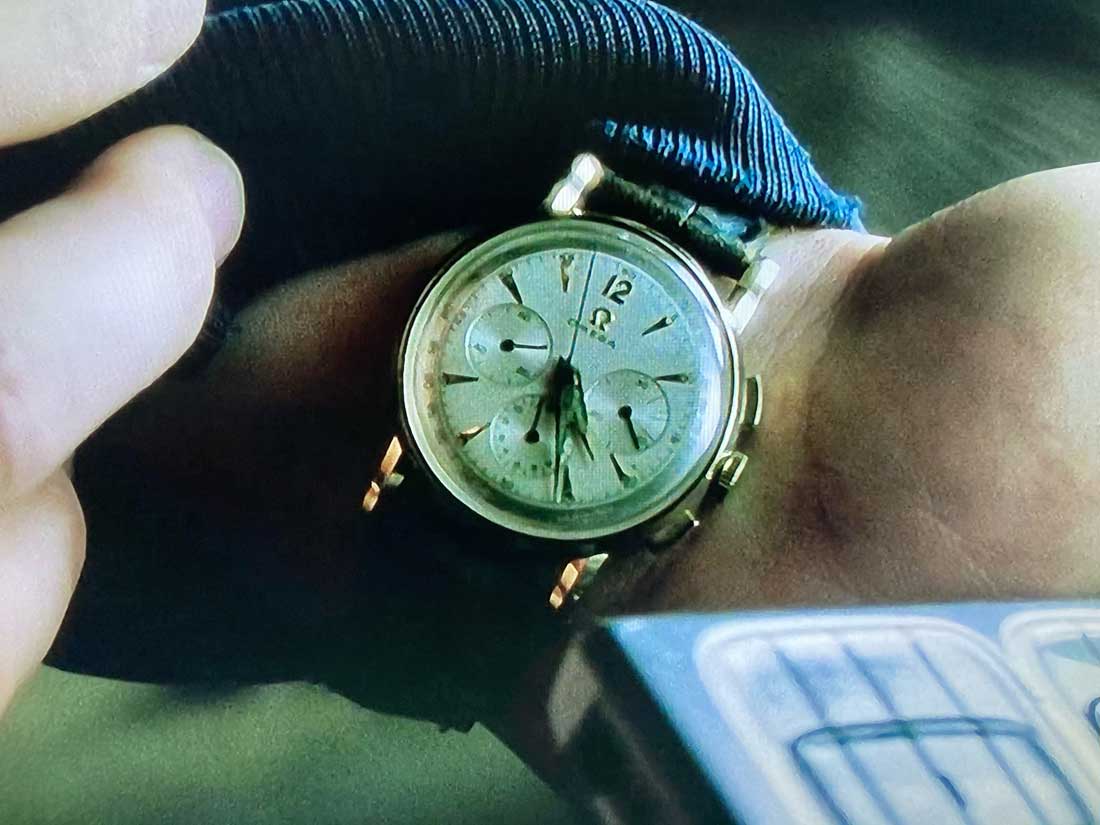 Image Credits & where to buy

Images were sourced online. I’ve linked to sources, and screen grabs from the movie. The War of the Worlds is based on the book of the same name by H.G Wells. You can now buy the film on Amazon.