Despite my agreement that this collar could possibly be too fussy for Bond, I quite like it. 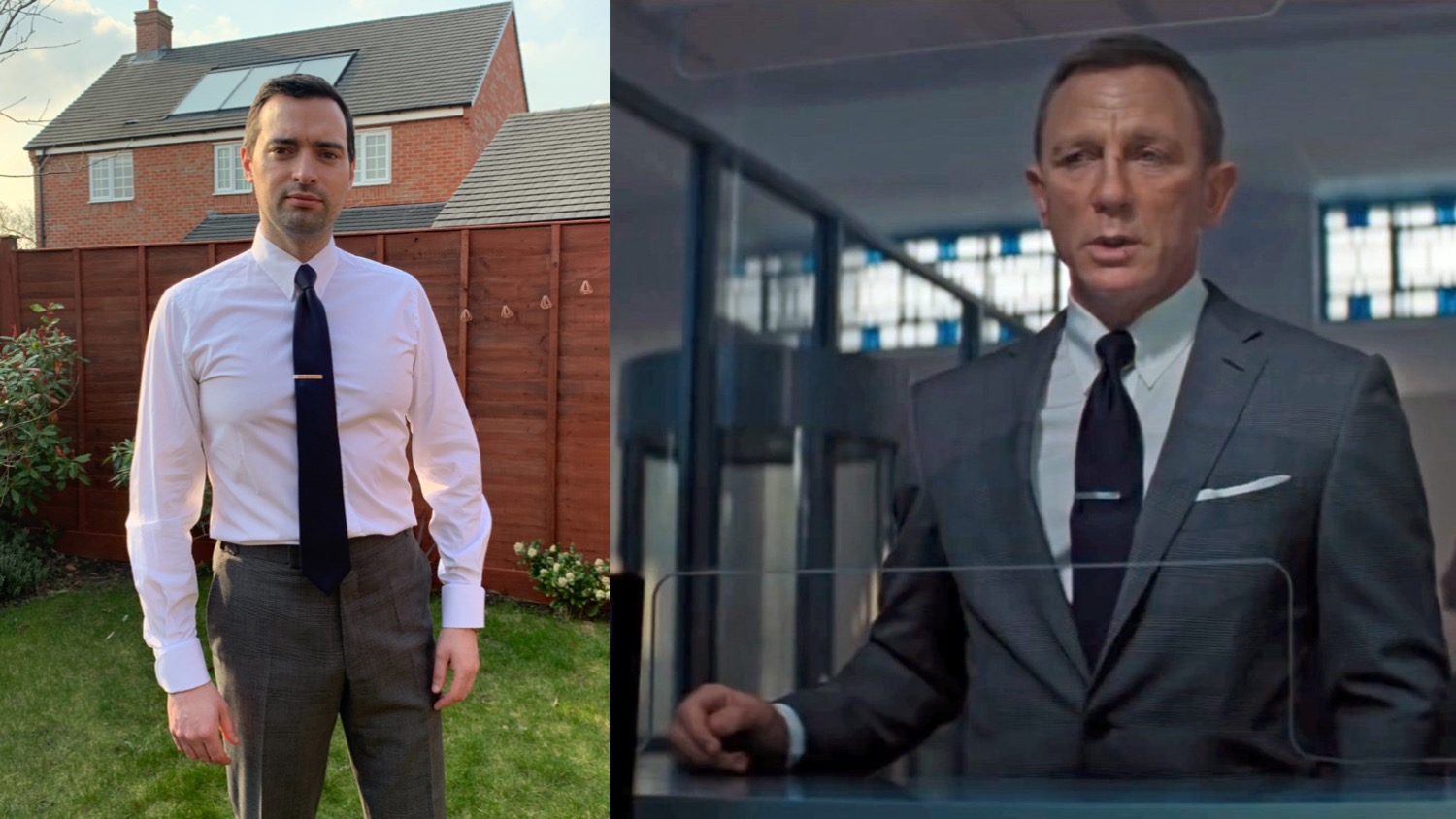 The return of the tab collar

This is one of two shirts seen on Bond with his TOM FORD suits when he returns to London. This Tab Collar Shirt is worn with the TOM FORD grey glen check suit, the navy TOM FORD tie, the Benson & Clegg tie slide, Crockett & Jones Highbury shoes in black and a pair of Barton Perreira Joe sunglasses on Bond’s first day back at MI6.

As with many of my No Time to Die purchases, I wasn’t planning on buying this shirt. Of the two daytime shirts that James Bond wears, I preferred the look of the TOM FORD blue shirt with the point collar.

However, I received an email through Shop Style telling me about a discount on TOM FORD shirts, and the one highlighted had cocktail cuffs. So, I was immediately interested! Shop Style immediately directed me to the Italist store, where I could see that the shirt in question had both a tab collar and cocktail cuffs. The price for this shirt on Mr Porter was £505 at the time. (Currently £405 but sold out online). The price I was being shown was 46% cheaper.

I was already in discussions with TOM FORD London on my Standard SPECTRE shirt in white and the No Time To Die Blue Shirt when this came up, but could I really resist? Well clearly not, otherwise you wouldn’t be readying this report. 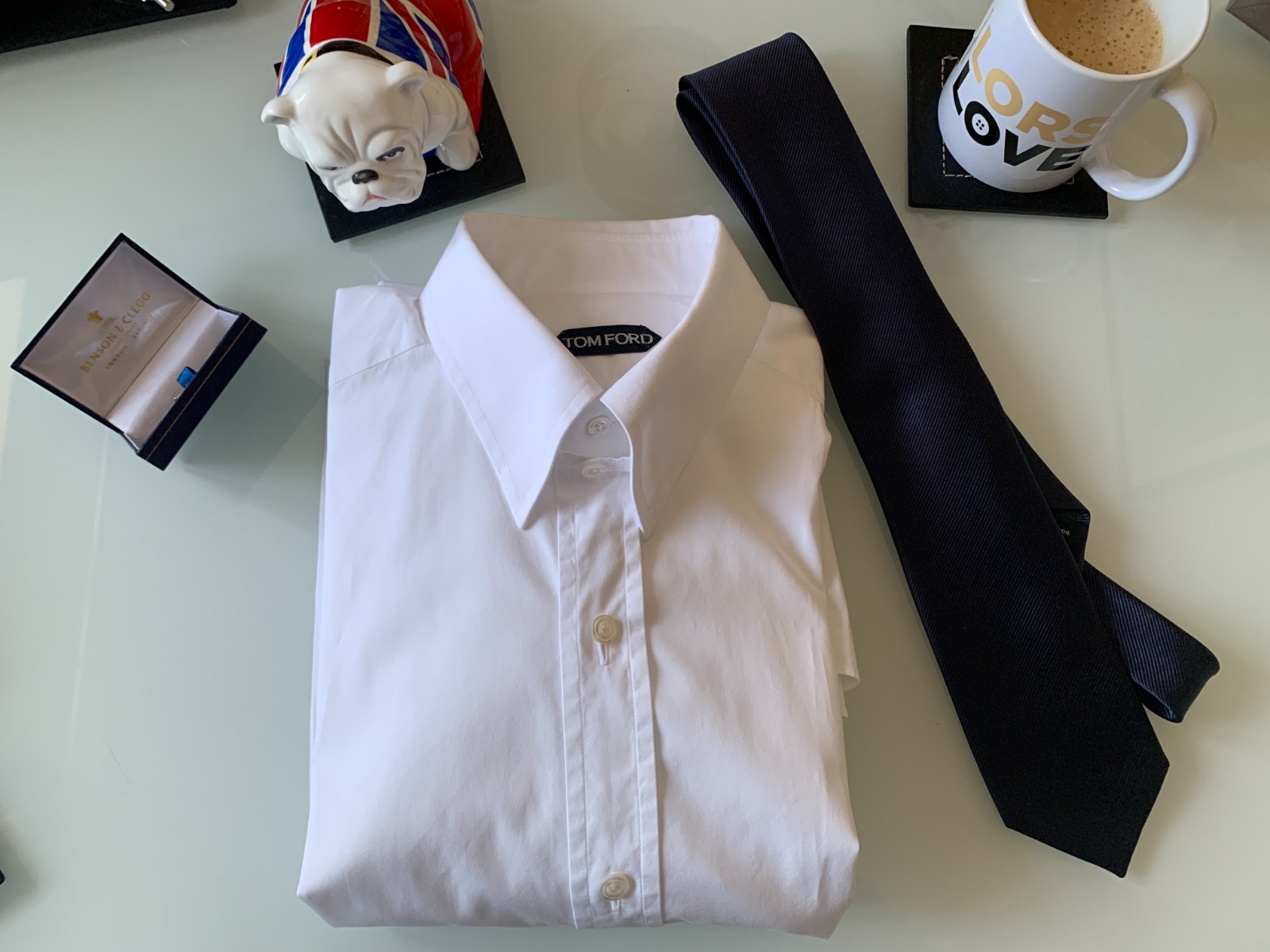 This is my second TOM FORD shirt that I owned, as this arrived before receiving the Made to Measure ones. As a standard ‘off the peg’ shirt it arrived within days. The shirt is a slim fit, with a tab collar, “Dr No” cocktail cuffs, gauntlet buttons and darts on the back. I ordered a size 40, which I realised once I received it was a size 15 ¾, rather than a 16 that I would normally have. I had mis-remembered the conversation European sizes to UK so it was ¼ of an inch shorter.

Firstly, I looked to see if they Italist had 41 sizes left. They didn’t! So, I just tried it on to see if I could get away with it. The back and arm measurements were the same as a 41, and about an inch smaller on the chest. For me that was all okay, the big question was would it fit around my neck. As it is a tab collar shirt you can’t wear it without the collar done up or without a tie.

Happily, for me it was, and still fits me well. 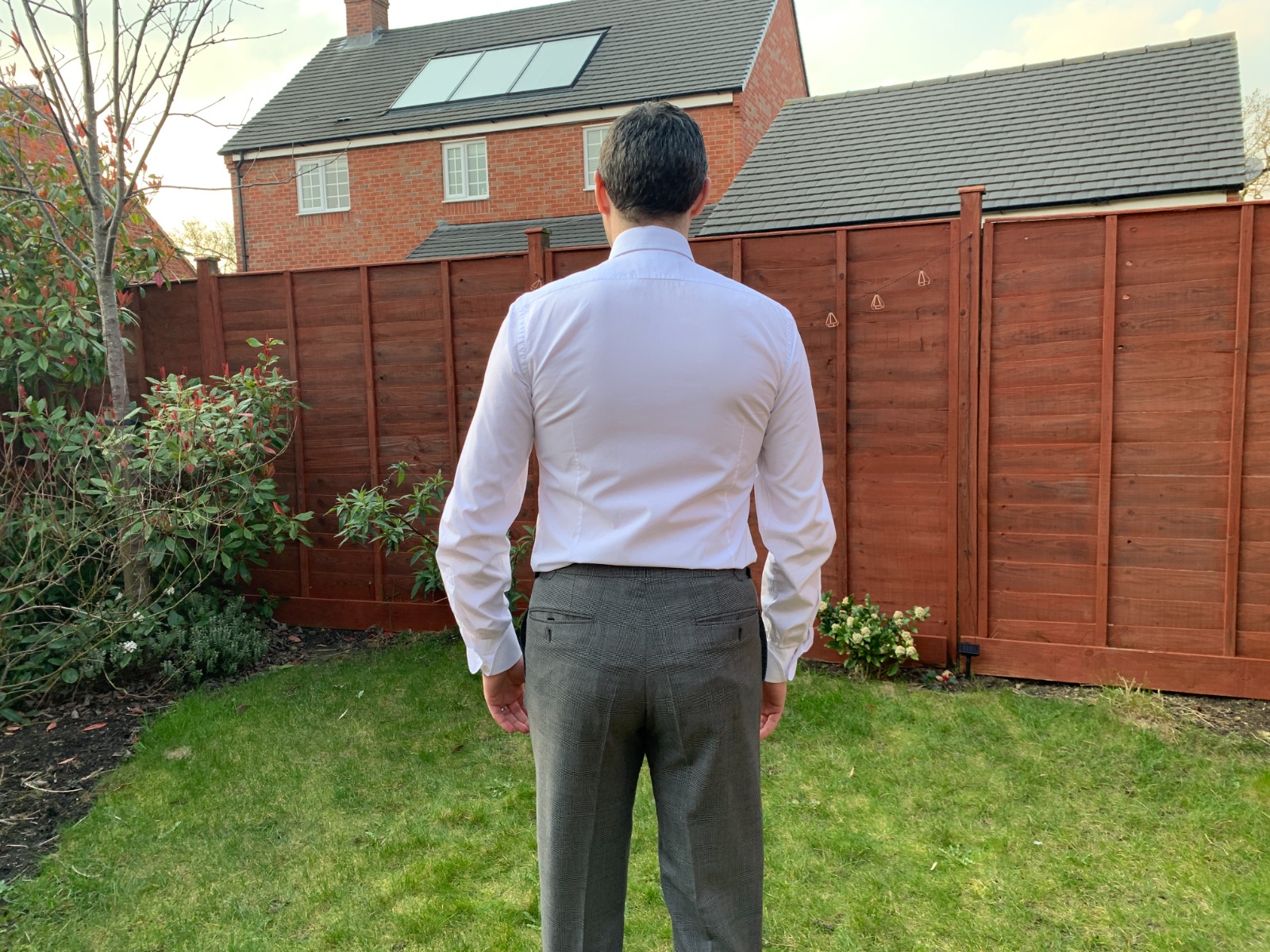 A tie is a must

I do wear this shirt on occasions when I’ve worn ties, which hasn’t happened a lot since working from home become the norm, but a little more often than I’d originally thought.

Like I mentioned, you can’t wear this shirt without a tie, or with the collar being undone. It just doesn’t look right! Take the scene from SPECTRE in Bond’s flat, he’s wearing his shirt with the top button undone and the tie loosened round his neck. Or in Quantum of Solace when Bond wears his shirt open collared under a cardigan.

You wouldn’t have seen that in Skyfall or in No Time To Die with this shirt either as it just wouldn’t look right.

This doesn’t necessarily limit what you wear this shirt with, as long as it’s buttoned up with a tie. I have worn this shirt under John Smedley Bobby and smart trousers. You could replace the trousers with jeans or chinos for a more casual look. I think I may recall Daniel Craig doing just that for the Skyfall press tour. 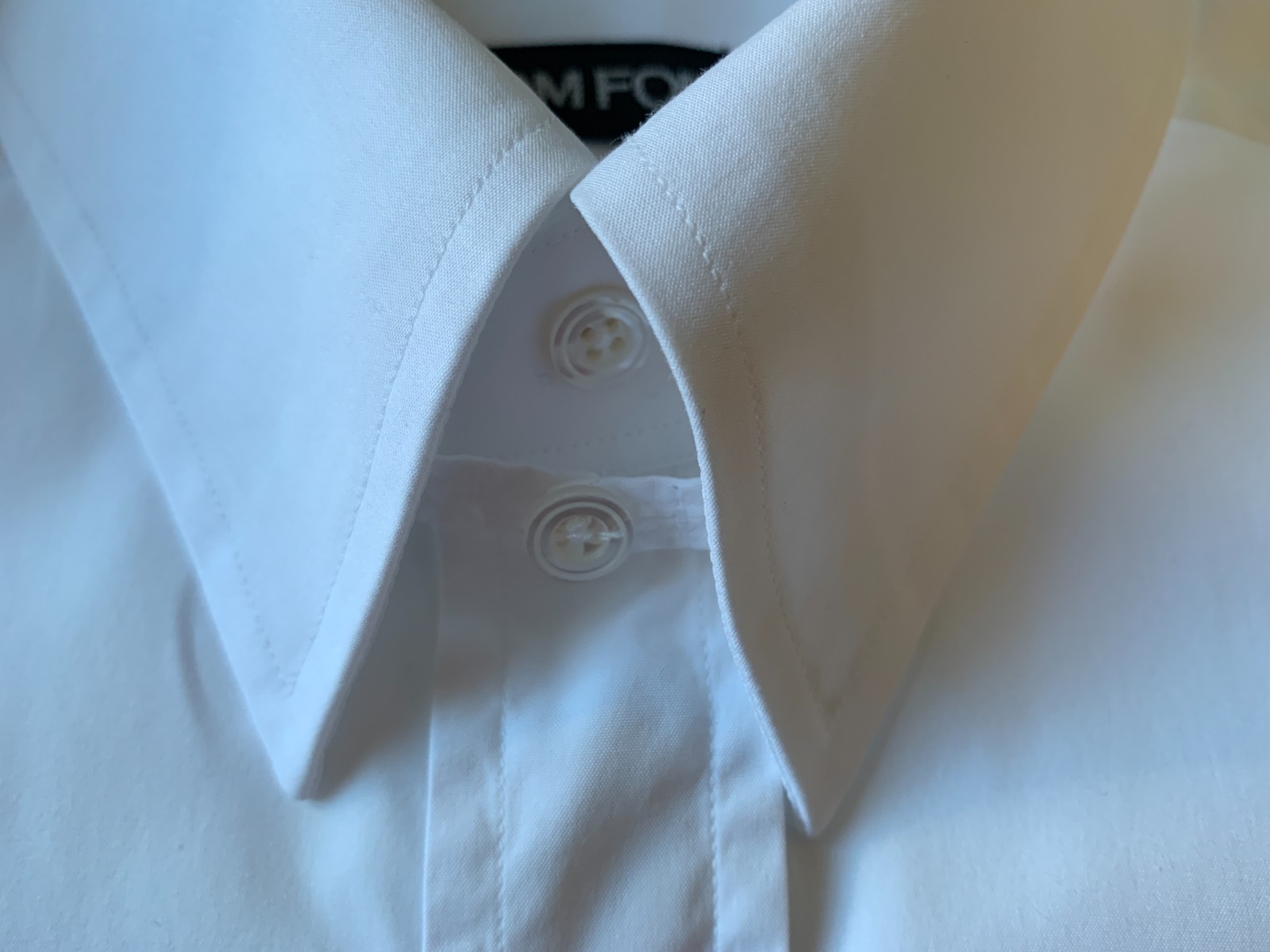 There was a community discussion regarding the tab collared shirts. Something around the lines of, if Bond was in a hurry to get out of a hotel or to follow someone, its not easy to do up a tab collar in a hurry. It’s a little too fussy for Bond, who would be ready to get out at a moments notice. I agreed with this conversation, it was one of the reasons I had never gone after the Skyfall Shirts previously.

Recently while running late, I decided to wear this shirt. I’d just finished tying my tie and then went to do up the tab button. Because I was in a rush, I was finding it difficult to do up. I must admit after Christmas I was wondering if I’d put on some neck weight and the shirt wouldn’t fit anymore.

Once I took a moment and slowed down a little, I was able to do the tab up without an issue. Since then, I’ve worn the shirt again and had no issues doing up the tab. No additional neck weight!

This example probably makes the case for it being a little too fussy for Bond. But then maybe Bond would be able to do up the tab in a hurry. But if not, it wouldn’t look right, and he’d know that. 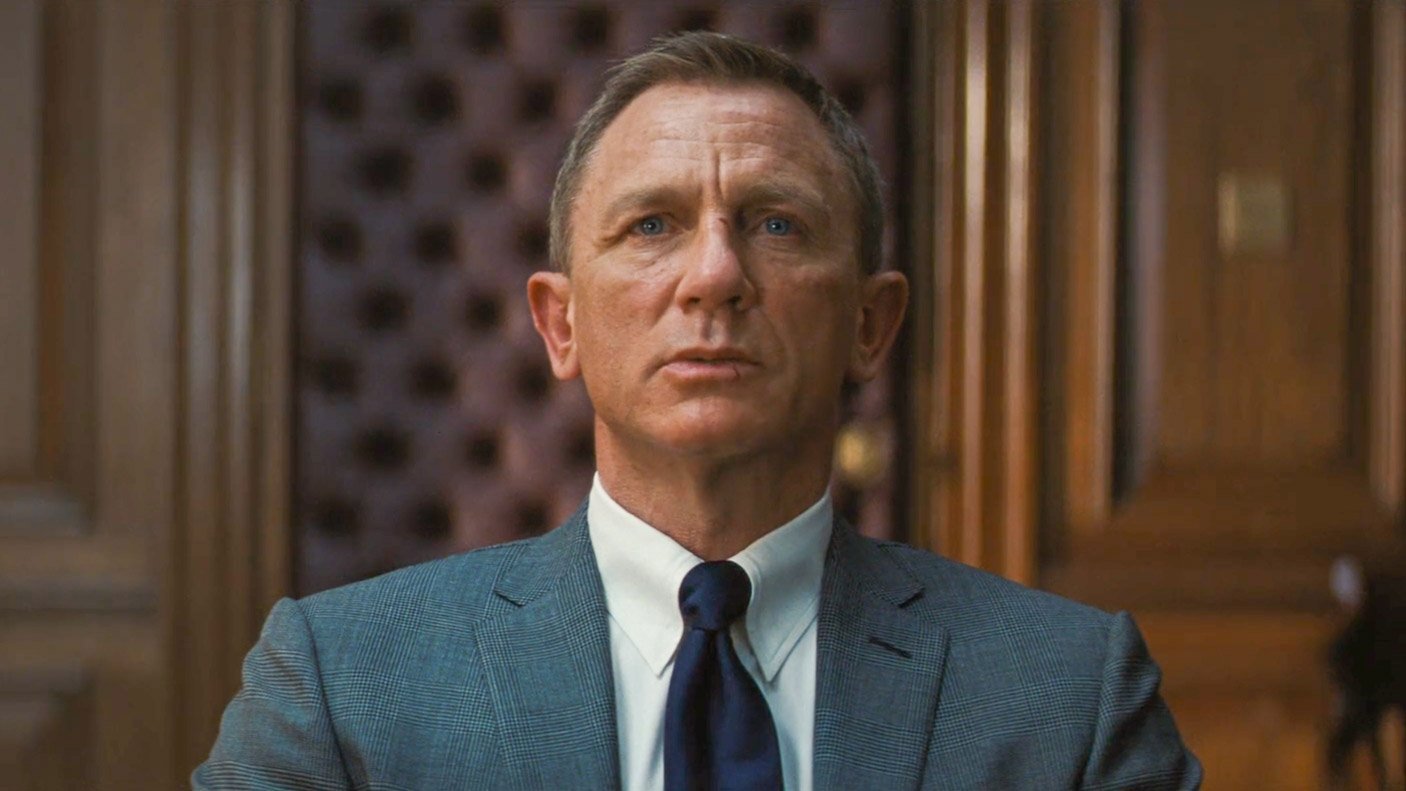 It’s not all bad

Despite my agreement that this collar could possibly be too fussy for Bond, I quite like it. I’ve worn this shirt over Christmas, for a few work visits and have felt comfortable in it.

I’ve worn ties with it that are not too thick or wide, due to the narrow opening provided once the tab in closed. I only wear ties in a four in hand knot, which is narrow enough for the gap available. In fact, having this shirt has made me re-think about the Skyfall shirts. They’re not something I’d be getting anytime soon, but for future possibilities. 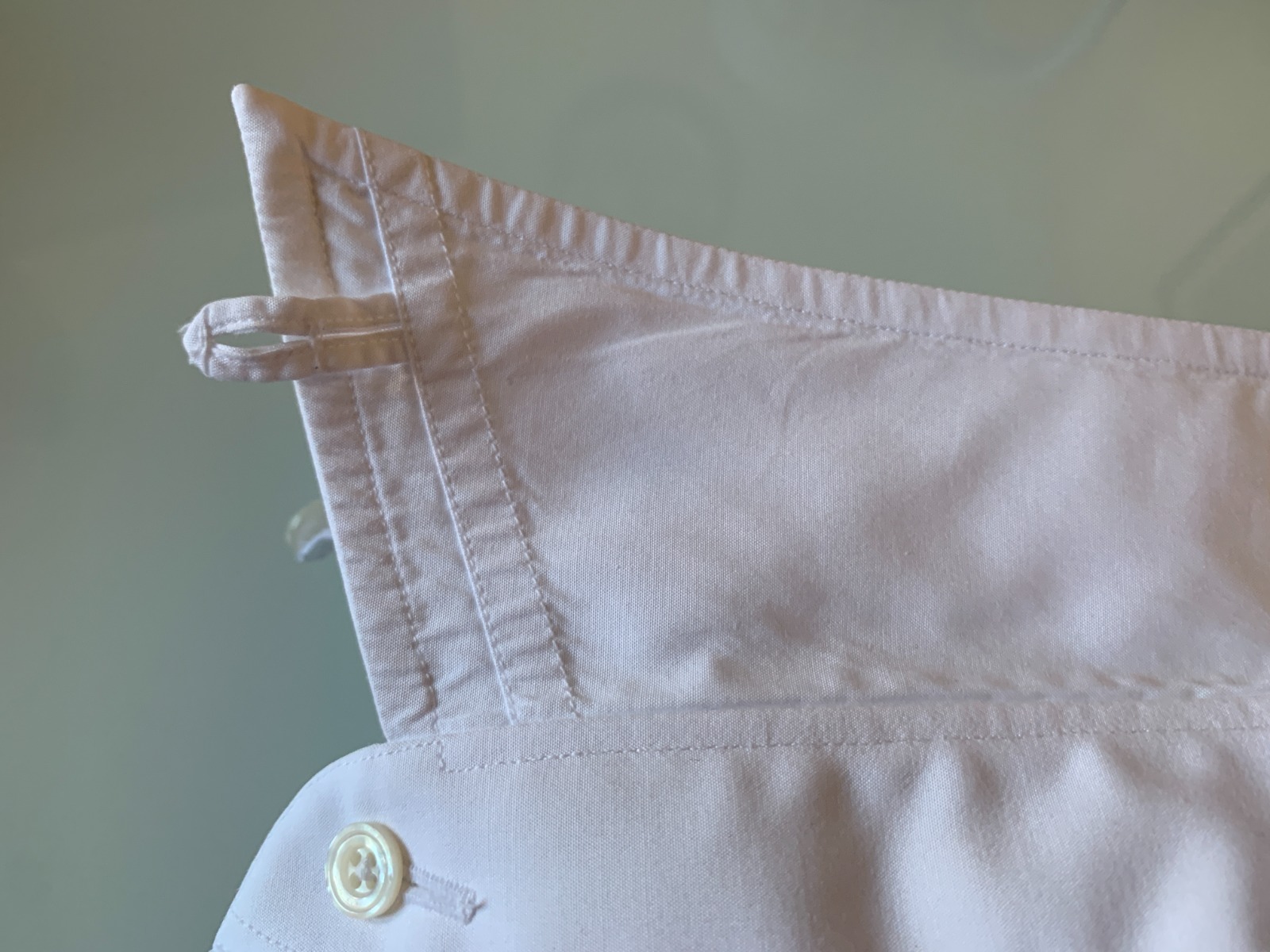 Some modifications were needed

After having the arms shortened on my Made to Measure shirts, I enquired with TOM FORD in London if I could get some of the ready-to-wear shirts done as well. I was surprised that it was a very reasonable price. So, I had this shirt and the No Time To Die Evening Shirt (future review) taken in and had the shirt arms shortened to the same lengths as the made to measure ones, which are slightly different lengths.

They were sent back to me on a TOM FORD hanger and in a nice TOM FORD suitor, both fit much better and look better with my suit jackets. The shirt is of the high quality and standard that I’d expect from TOM FORD and will last me for many years to come.

It is fair to say I wouldn’t have bought this shirt if it hadn’t had been on sale. From this experience, if I were to buy a TOM FORD ready-to-wear shirt in the future, I would look at the full price of the shirt, plus the cost of altering the arm length compared to the cost of having the shirt Made to Measure.

This is one of three TOM FORD purchases I have made through Shop Style based on alert emails I have received and received a good discount on. I can get a lot of nonsense emails from them, which go straight in the bin. But on this occasion, it worked out well.