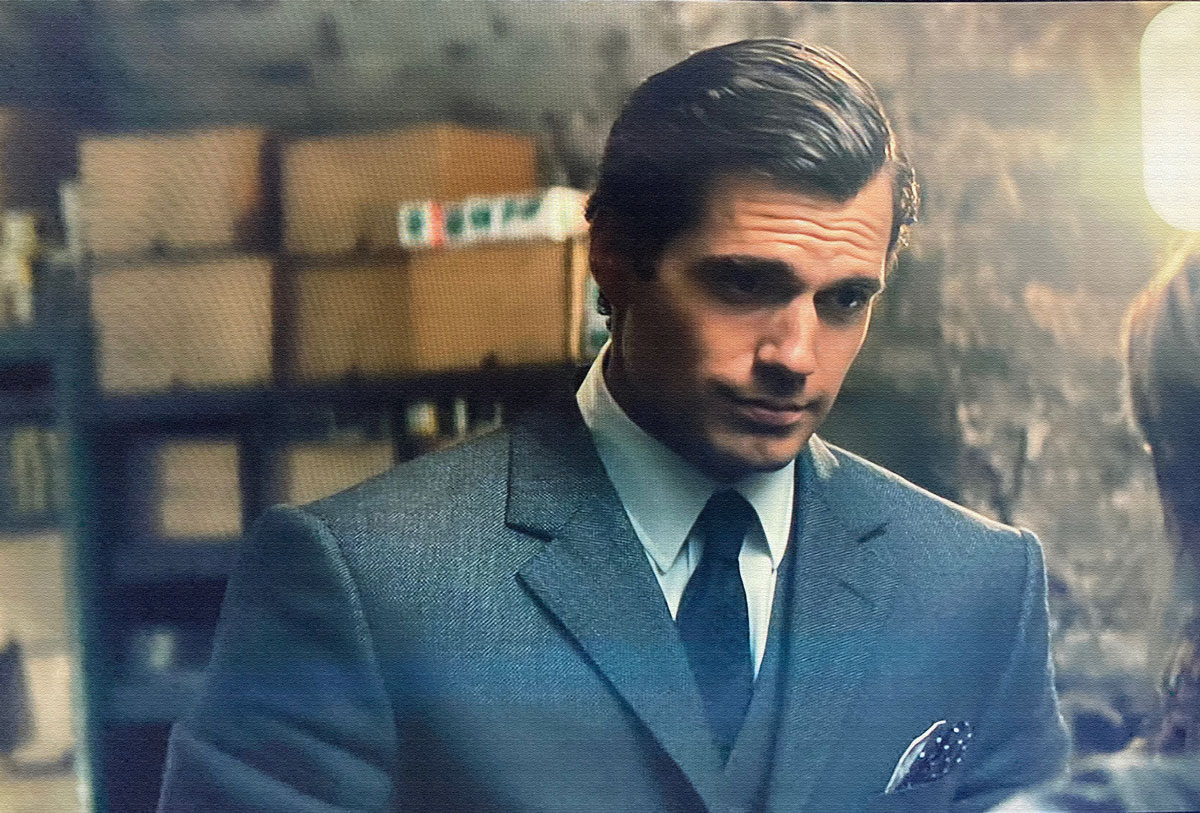 …and remember, take it like a pussy – Napoleon Solo, The Man From Uncle. 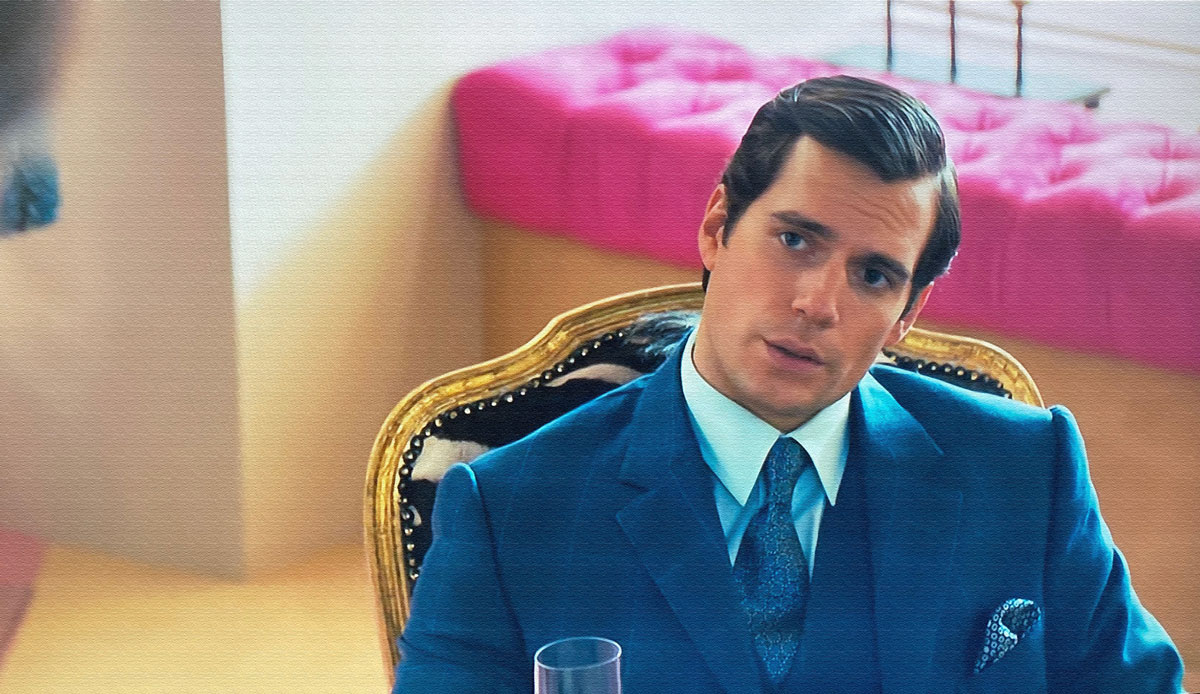 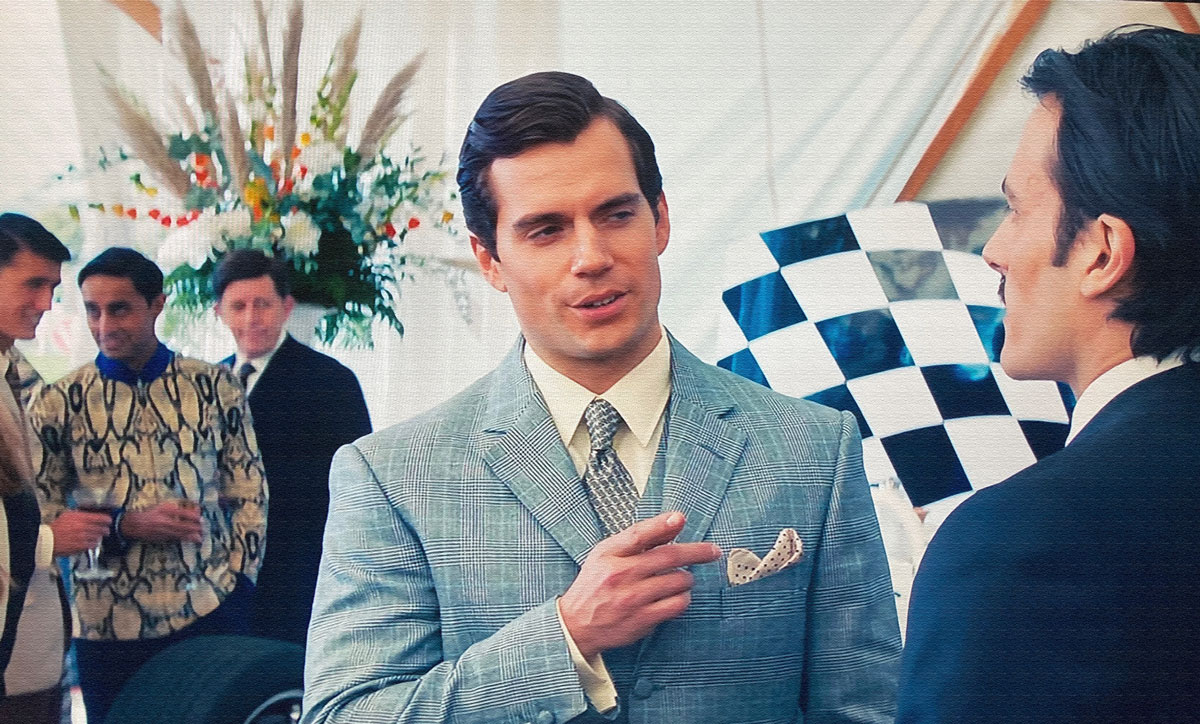 Above and below are my favourite tailoring moments from The Man From Uncle. This three button blue check suit is perfect party attire. The film is set in the early 60s, the style however reflects the style of the late 60s early 70s. This artistic licence allowed the costumers latitude to inject more playful colours and cuts.

The below is the casual suede bomber jacket and flat cap worn by Illya played by Armie Hammer. I spoke about this look in depth with David Zaritsky from The Bond Experience.

We’ve been tailoring for over 30 years, started in a derelict house in Spitalfields. I had a mad romantic dream to create the idea of a new bespoke movement, and we’re still here.

Hopefully still relevant. Along the way we’ve done a lot of movies, which started with Mission Impossible in the 90s. But The Man From Uncle was a really interesting one. We get briefed. I think we get called in to do much more than make say ‘a blue suit’. 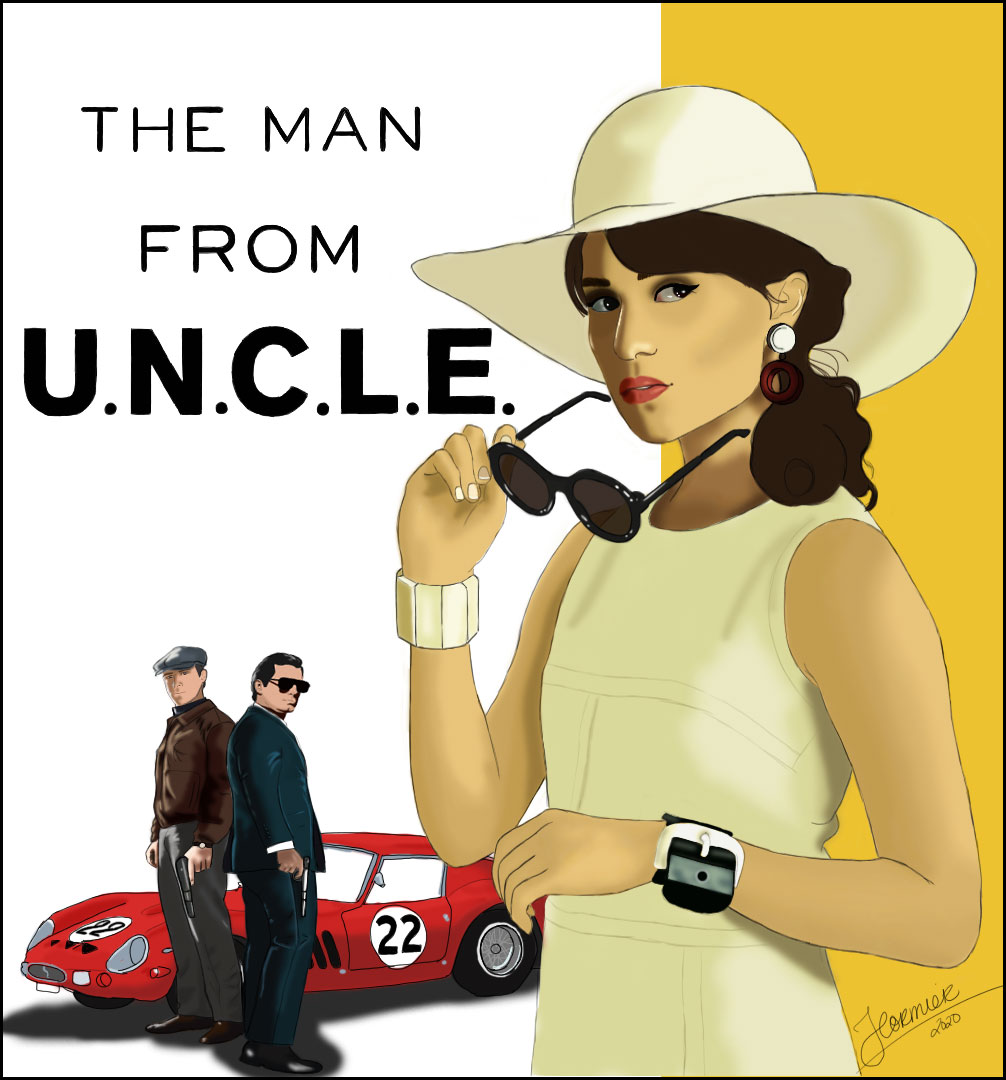 How did you approach the film and what was the brief?

What we try and do is work out the character and work out the profile. It was a Guy Ritchie production, they didn’t want it to be literally like the original Man From Uncle. They [in the original] were wearing those 60s bum freezers, slightly Italian-esque suits which was a cool look – anyway.

We were looking towards the late sixties and early 70s. Almost that jetset – when things were coming a bit more exaggerated and colour levels were a bit more fun. If i remember correctly Joanna (Johnston) and I spoke at great lengths about this.
We put story boards for this together and when Henry Cavil was the main person we dressed and we put him in a wonderful cobalt blue mohair fabric that we had specially woven, many years ago it was a Timothy Everest vintage. Mohair. 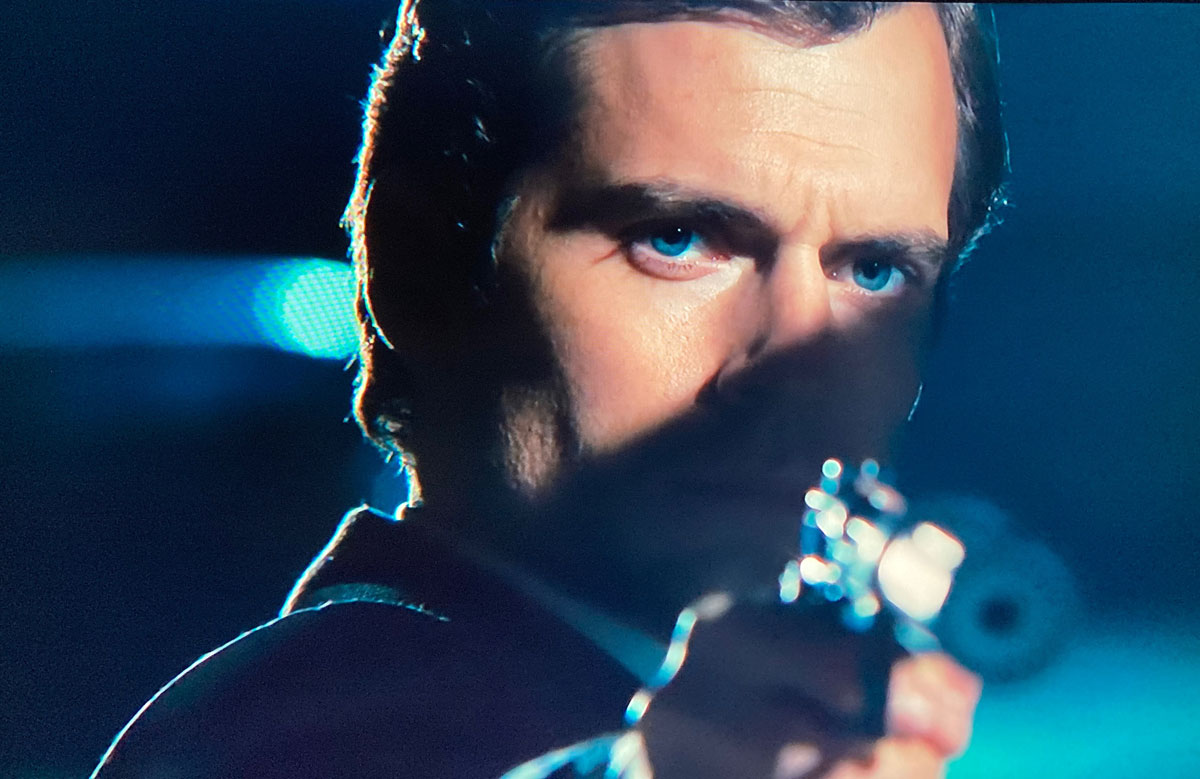 And then we did a wonderful 3-piece check for him as well. When Joanna went to show Guy Ritchie, she said apparently thats not what he was expecting at all. Initially he wasn’t sure if he liked the look at all. He then said ‘I preferred it how it was in the original film‘. So we got off to a rocky start but he ended up loving it.

The other thing that was interesting was that Henry Cavill was coming down from being Superman. He was losing a lot of muscle and weight, […] we weren’t able to measure him or fit him before the first fitting so they employed someone form the 300 to get his weight down.
Joanna padded a mannequin to the dimensions that in six weeks time, Henry was going to be. And to almost the millimetre he was trained to fit that mannequin. 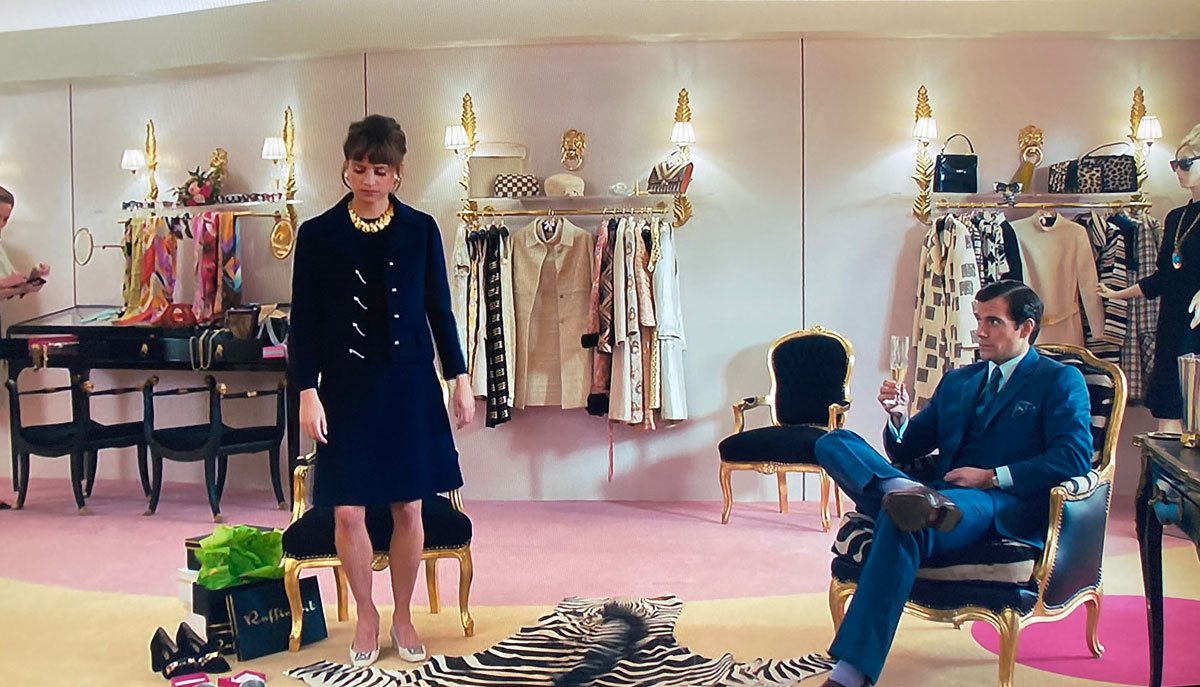 This is truly a film of two halves. It really fails to convince in the first halve and aside from the slickness, their is not a lot else to convince me that I need to invest another hour watching it through. I still have trouble with Henry Cavill being too adonis-esque. Too statuesque. I require faults, vulnerability, a weakness in my leading man.

Scenes such as Illya being seduced by a drunken Gaby work well as isolated MTV vignettes, yet fail to service the film with any nourishment. At the risk of sounding cliche, some scenes lapse indulgently into style over substance.

I don’t buy into the argument that style is the substance for The Man From Uncle. It is aware that style, and great style, is crucial to the aesthetic, but it’s not the overarching theme. 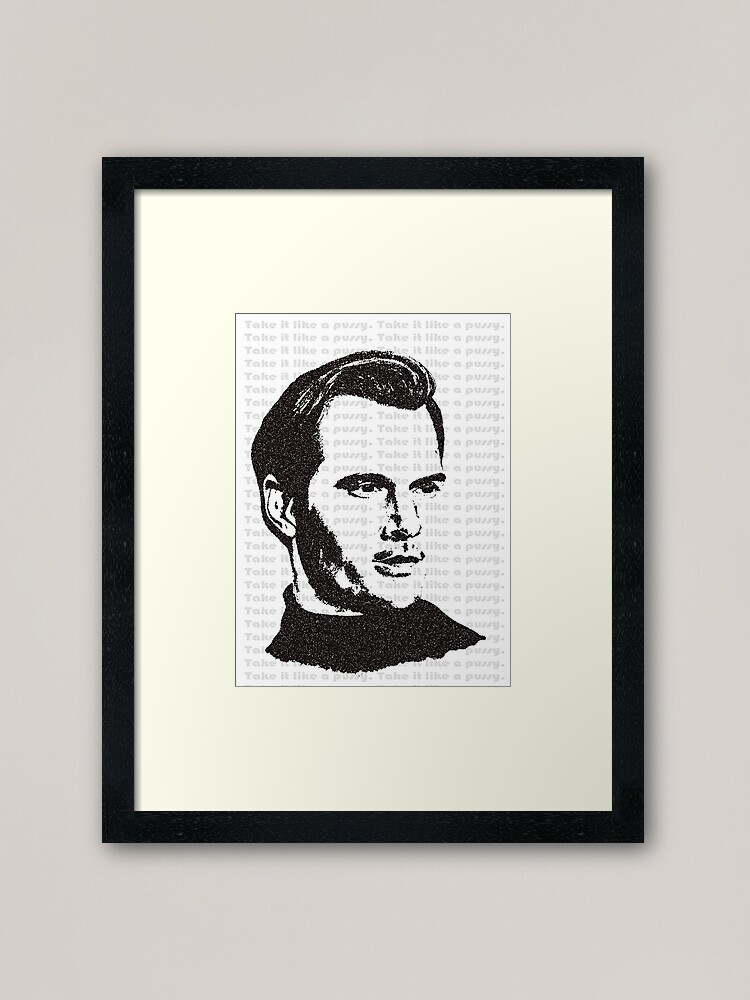 I do enjoy the sartorial jousting. With both men matched so equally in terms of physique, guile etc. It really only comes down to Napoleons elitist sense of style code that gives him the upper hand.

Example, when Illya throws the hotel bugs at Napoleon in the hotel hallway, Napoleon’s only rebuke is to admonish his fashion tastes ‘that bow tie doesn’t go with that suit‘.

That said, the dune buggy zipping through the shallow waters in sync to the outrageously bad ass Daniel Pemberton soundtrack is not only pure cinema, it’s positively savage.

Learn more about Timothy Everest and his contributions to the James Bond films in the book From Tailors With Love: An Evolution of Menswear Through the Bond Films, available on Amazon.

It should be noted that the suits for Henry Cavill were made by the Timothy Everest Bespoke team at Timothy Everest. Not the MBE.Studio. The cutter was Fred Nieddu.

Contributions by Bill Koenig from The Spy Command

(Original series) — It looks to me that Robert Vaughn upgraded his suits in the show’s final season. In the first three seasons, he’s wearing single-breasted suits and (to my untrained eye) it looks like they wrinkle up a bit. Some of his suits in season 4 look nicer.

(Movie/original series) — It looks to me that Armie Hammer was definitely channeling the David McCallum turtleneck look. Hammer’s flourish was adding a cap, something McCallum never did.

(Original series) — Leo G. Carroll as Mr. Waverly definitely had an English/”tweedy” look in his suits. I thought Hugh Grant sort of matched that in the movie.

(Movie/original series) — It struck me that the 2015 movie costumers wanted Cavill to wear mostly three-piece suits. I don’t recall Robert Vaughn wearing such suits very much. The one time I can recall off the top of my head is when he was pretending to be a banker. In the extended version of the pilot, McCallum’s Illya did wear a three-piece suit. But again, I don’t recall him wearing such suits very often.

Not strictly suits, but an early episode (The Project Strigas Affair) has McCallum’s Illya in a black turtleneck along with a black wig, fake mustache and glasses. I didn’t realize this for years, but he was made up to look like a young Trotsky. I guess Illya’s revolutionary heart still beats.