‘How do you do, old sport? I’m Gatsby.’ Jay Gatsby, The Great Gatsby. 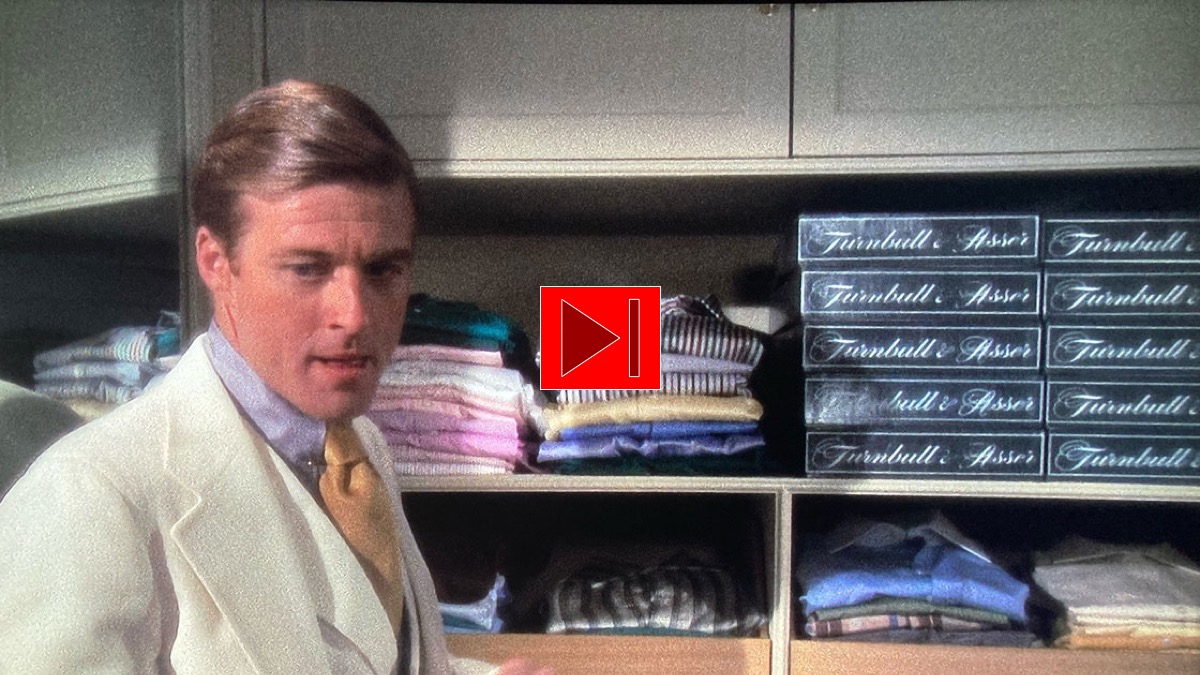 I think there are many takeaways from this film. Robert Redford gives a credible vulnerability to Jay Gatsby. Although, the whole premise of The Great Gatsby is underpinned by the notion of reliving the past, and that one has to be monogamous to that first love, even in separation.

Gatsby could have wooed Daisy away from Tom, had he not been intent on whitewashing her relationship with Tom from existence. It’s a bit like in The American version of The Office when Michael gets a new girlfriend and photoshops himself into her old holiday photos. If you get my drift. 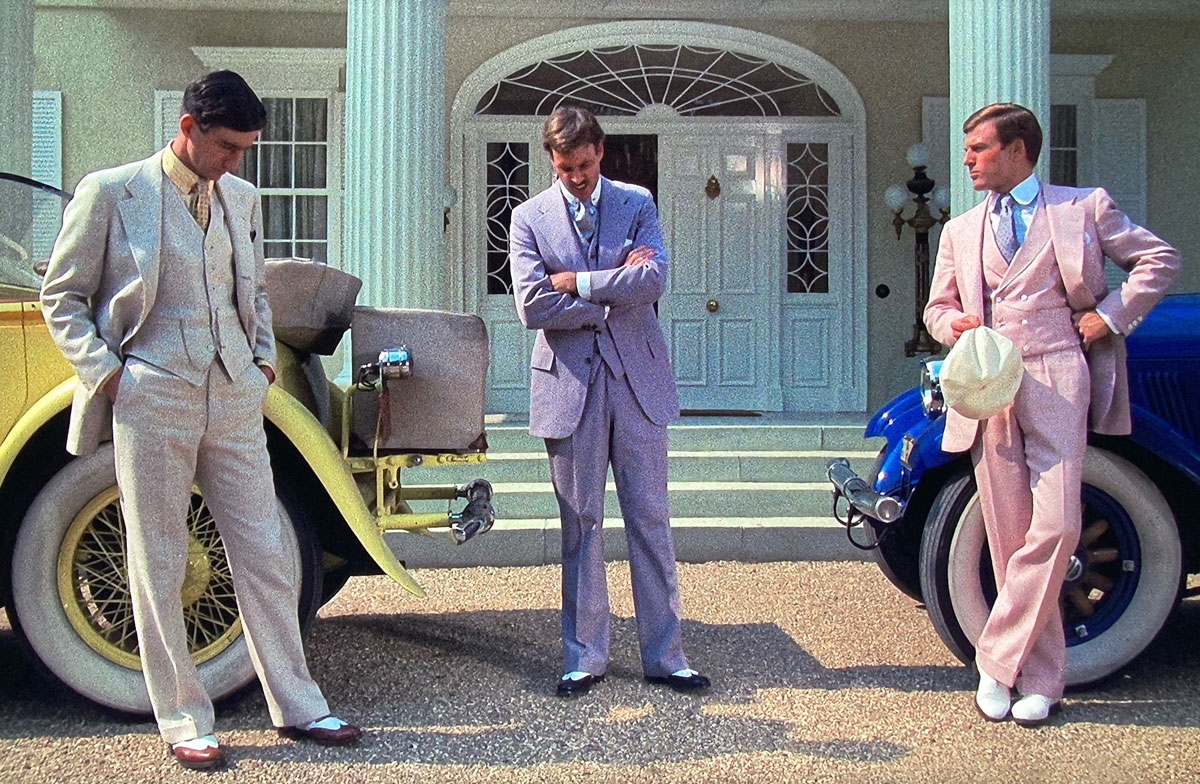 On this episode of the From Tailors With Love podcast I speak with menswear writer Jovan Gauthier-Vincent and Daniel Stroupe from Turnbull and Asser about The Great Gatsby (1974).

T&A were featured quite prominently in this film when Redford launches his shirts across the room at Mia Farrow. From the book also Gatsby cites he has someone from England send him collections twice a year. You get to see the T&A boxes in the background in a heavily branded scene. Apparently when filming they had to switch out the shirts to different fabrics because they just didn’t float in the air the way the director imagined they would. 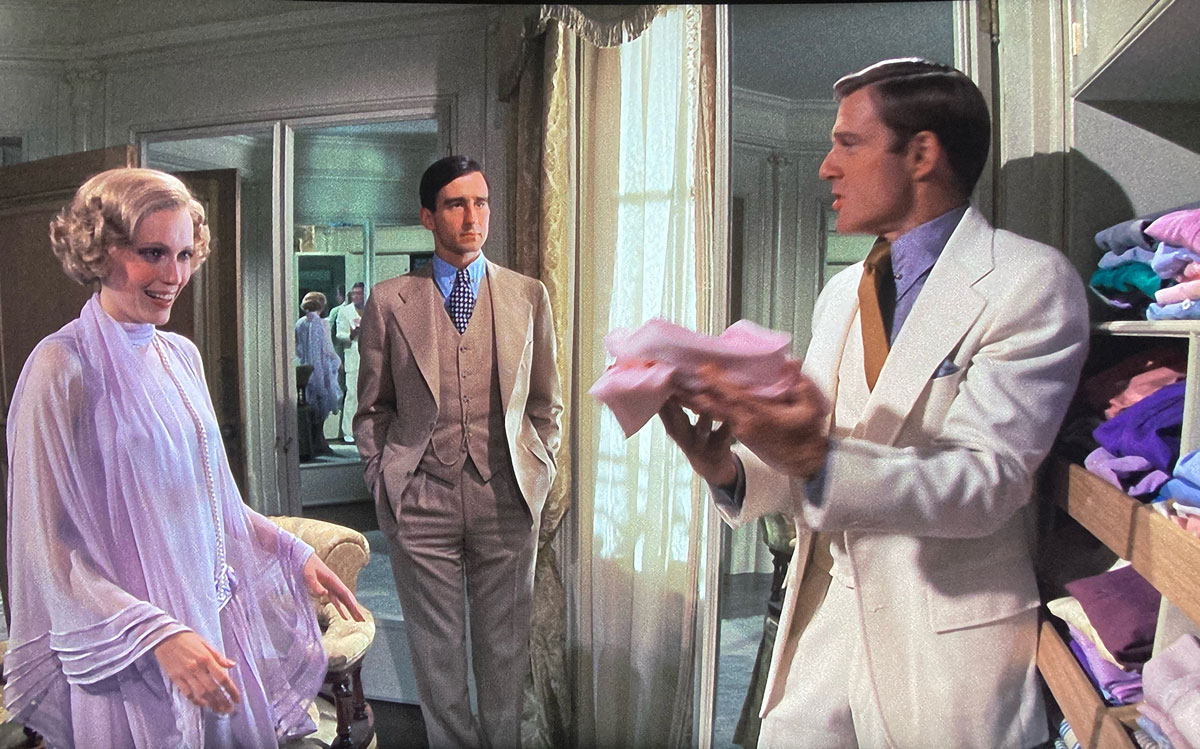 Nick Carraway’s off-white linen suit immediately gives away that this was produced in the 1970s. Wide lapels, slightly flared/bootcut trousers, modern button two stance. Great action back though, very authentic to period. Shirt with spearpoint collar looks pretty authentic to period too. Tie is a little thick for the time. 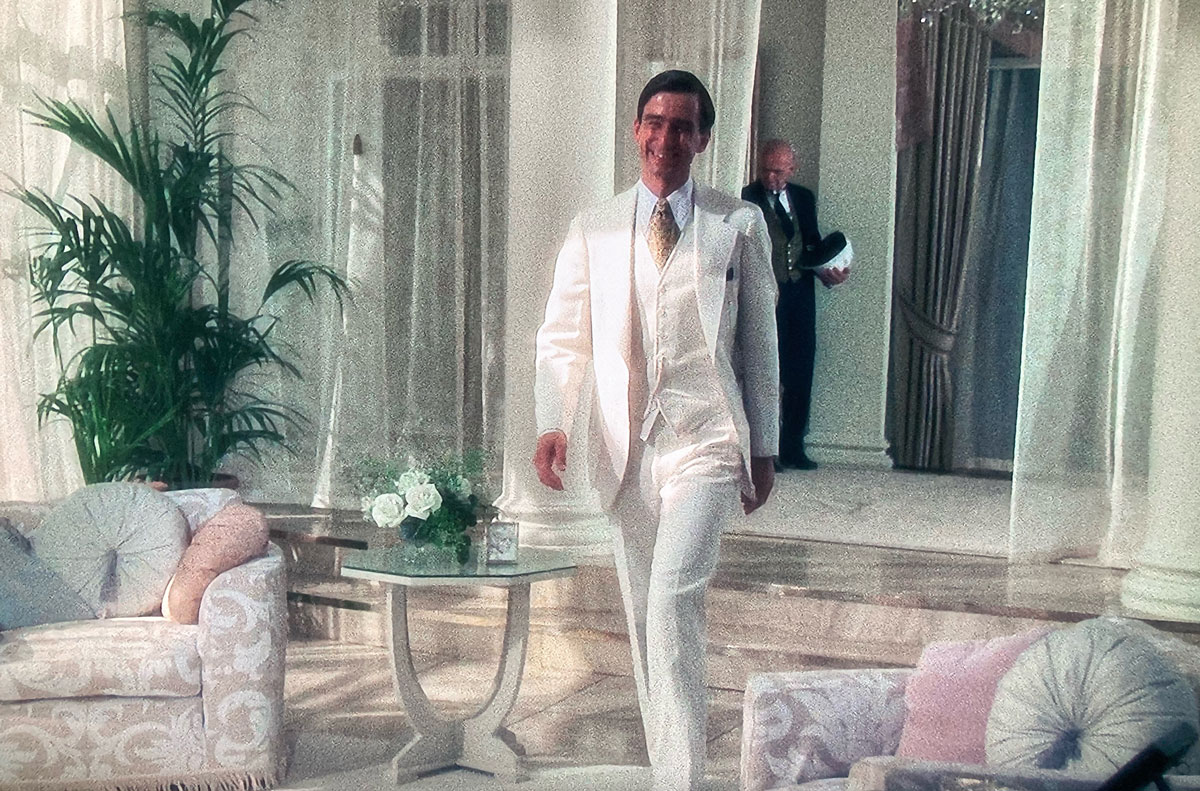 Other suits follow the same pattern. Nice pinned collars. Soft round collar on Tom is aces. Shirts are probably the most accurate thing. Tom’s navy blazer with brass buttons. 8×4 fastening is reminiscent of the later Prince Charles’ 8×3 navy blazer. Along with the narrower peak lapels, this helps it blend into the 1920s a little better than the button two wide lapel suits. 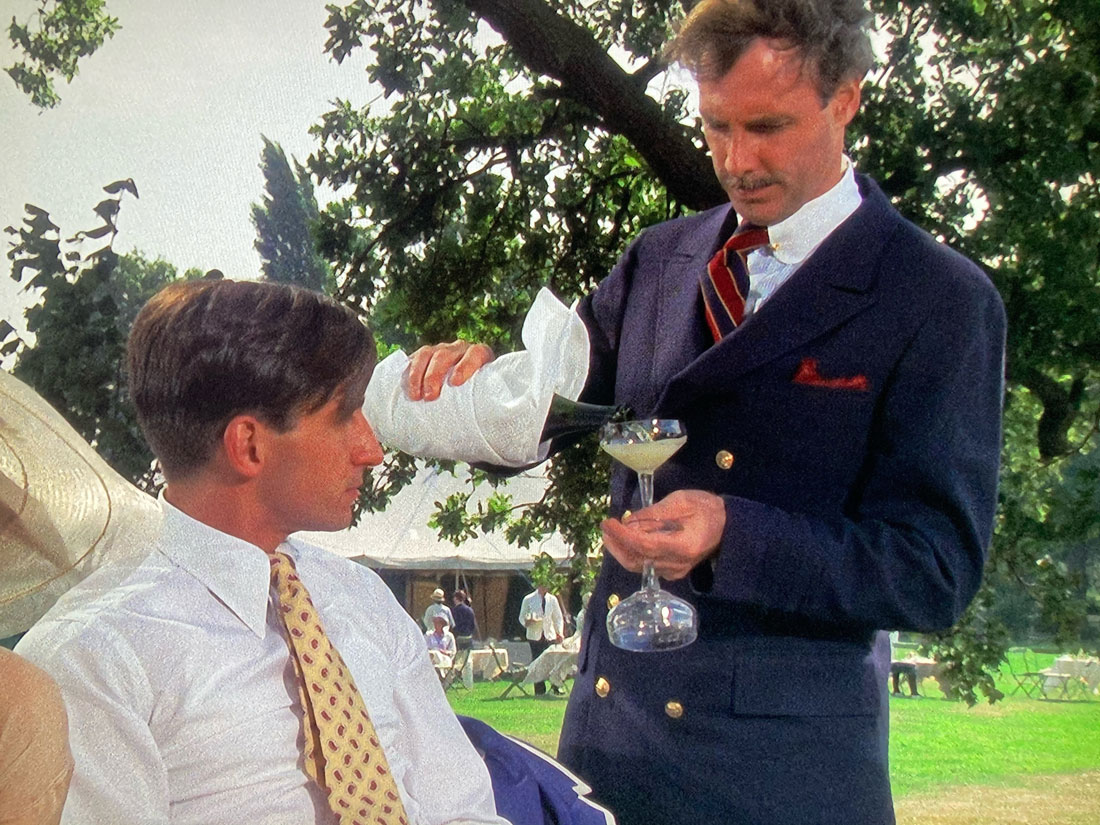 Extras at Gatsby’s party are dressed pretty correctly in white tie. Some black tie here and there. Not as 1970s as other menswear in the movie. Lots of period correct dresses and accoutrements on the ladies as well. Nick Carraway is underdressed for the occasion in a navy blazer – he probably does not even own a full dress suit at this point. 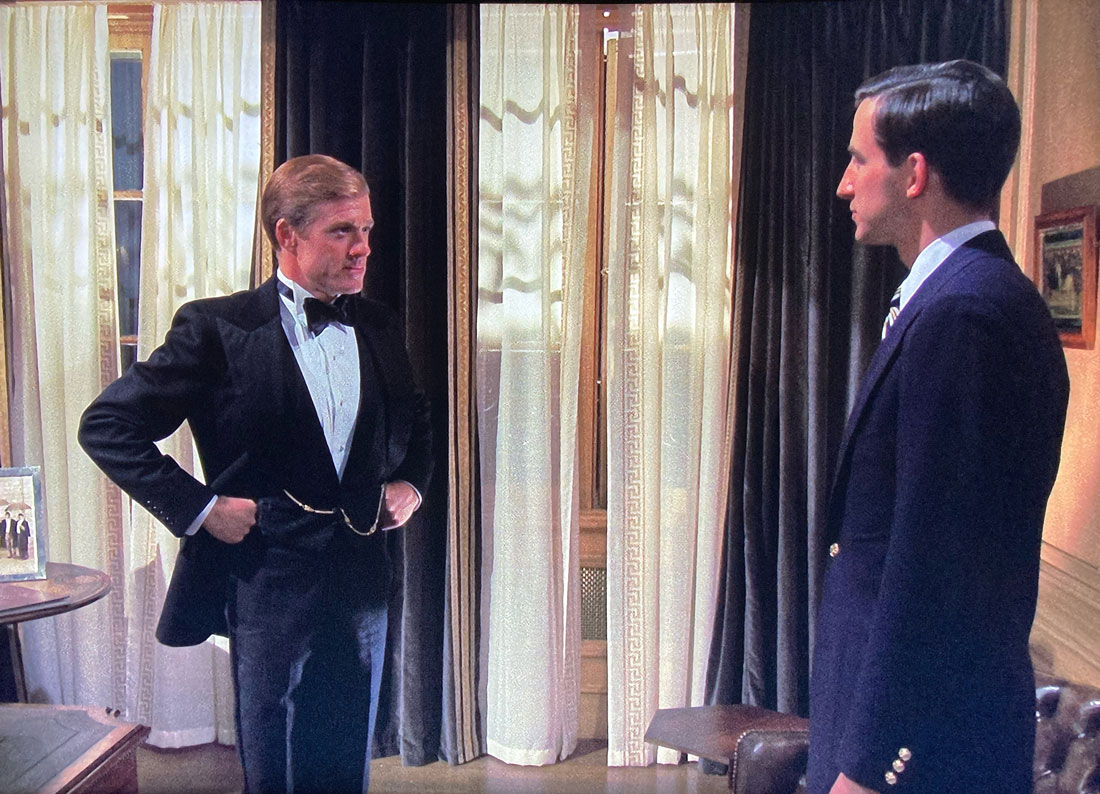 Gatsby’s bodyguard wears a waistcoat that’s far too high cut for evening wear in the ’20s. Gatsby himself in a very ‘70s dinner suit, but waistcoat is more correct. Reverse satin shirt is an odd choice with a linen suit, but it does show Jay’s opulence. Double breasted waistcoat is a good choice but would have been made with buttons in the keystone pattern in reality. 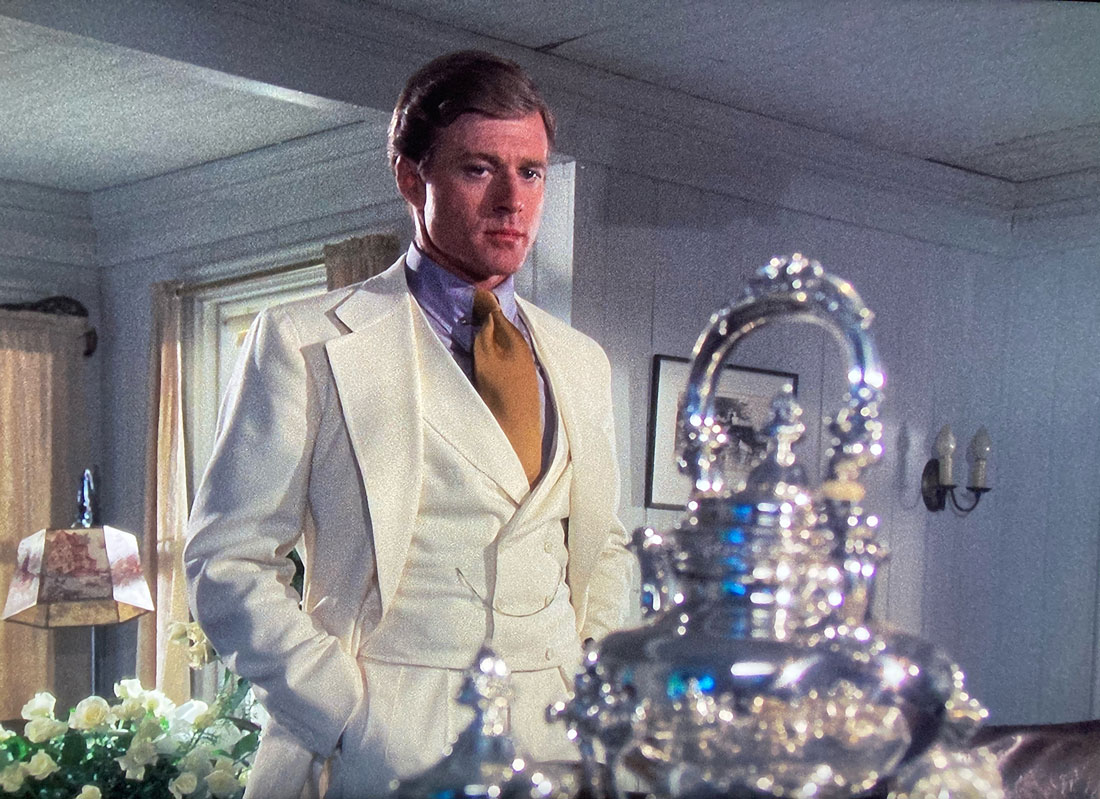 Tom and Jay incorrectly wearing soft pleated front shirts with white tie. Nick is ironically better dressed than the moneyed men he associates with by wearing a stiff Marcella front shirt. Wing collar is higher banded and more correct too. Nice waistcoats on all three men! 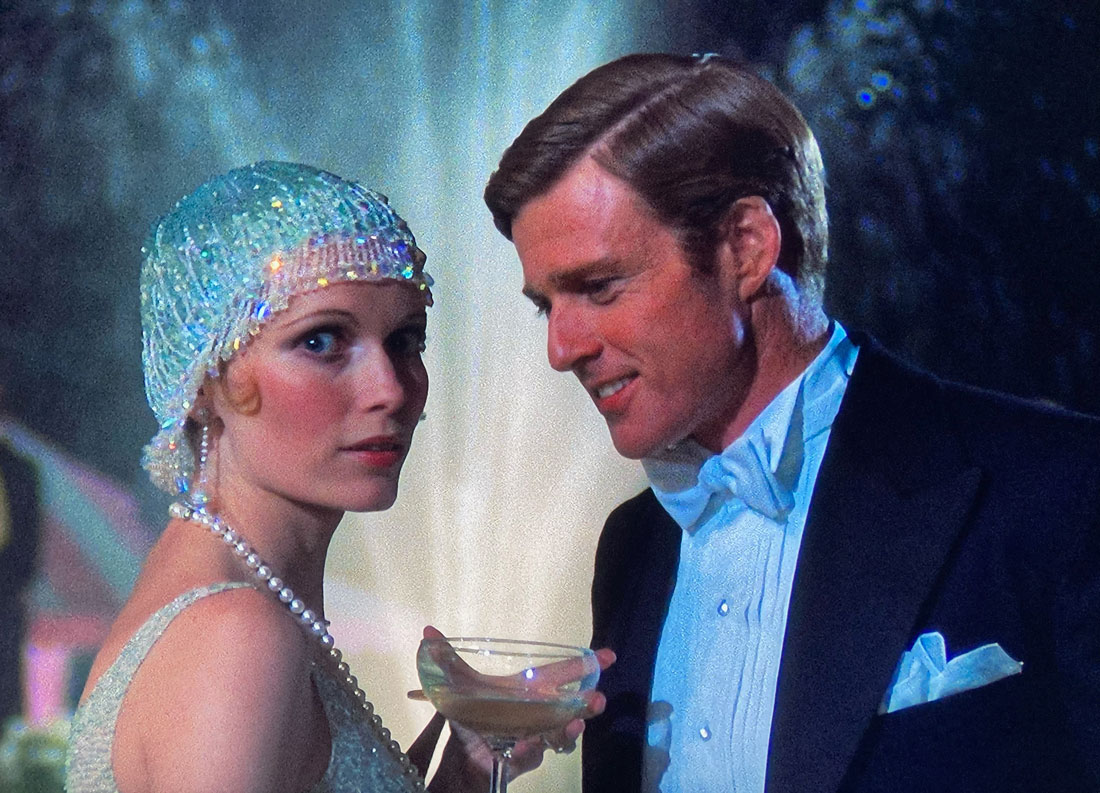 The full episode is available to listen in the player below or on iTunes, Stitcher or Spotify. Don’t forget to leave a review on your smart phone there. You can also check out our episode on the 2013 remake of The Great Gatsby, links in show notes.

A pencil sketch of Jay Gatsby is now available through our Red Bubble store. Thanks for supporting the show old sport. 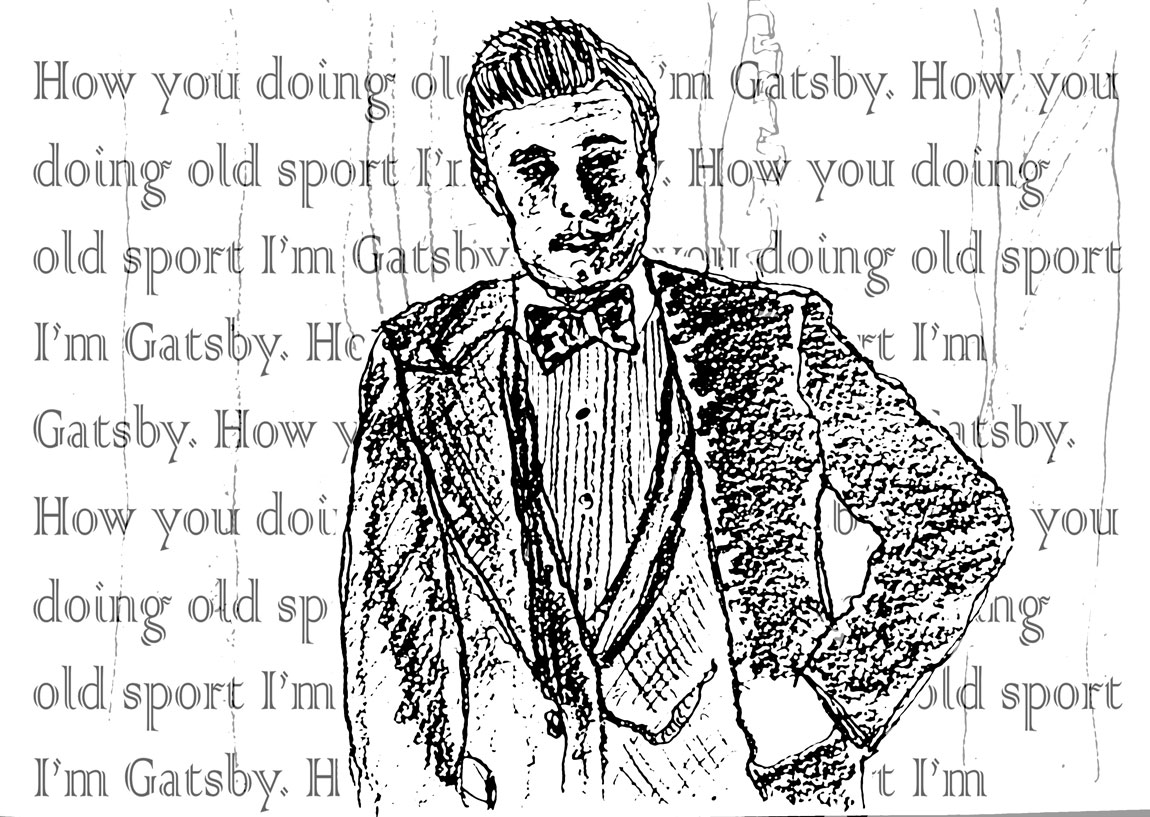 Images below courtesy of Scott Larkin from Bond On a Budget on Instagram. Taken at the Rosecliff Residence on Newport Rhode Island that provided the back drop for the Gatsby film. Also True Lies, recognise the stairs? Although the shirt and tie seem to be replacements as Daniel Stroupe from T&A states:

Well the suit is most likely the one sure but the shirt and tie def are not I know our reproduction wasn’t faithful in terms of fabric. But yeah the collar is very very not the one. And the tie as well, also should display it with the jacket open but alas. 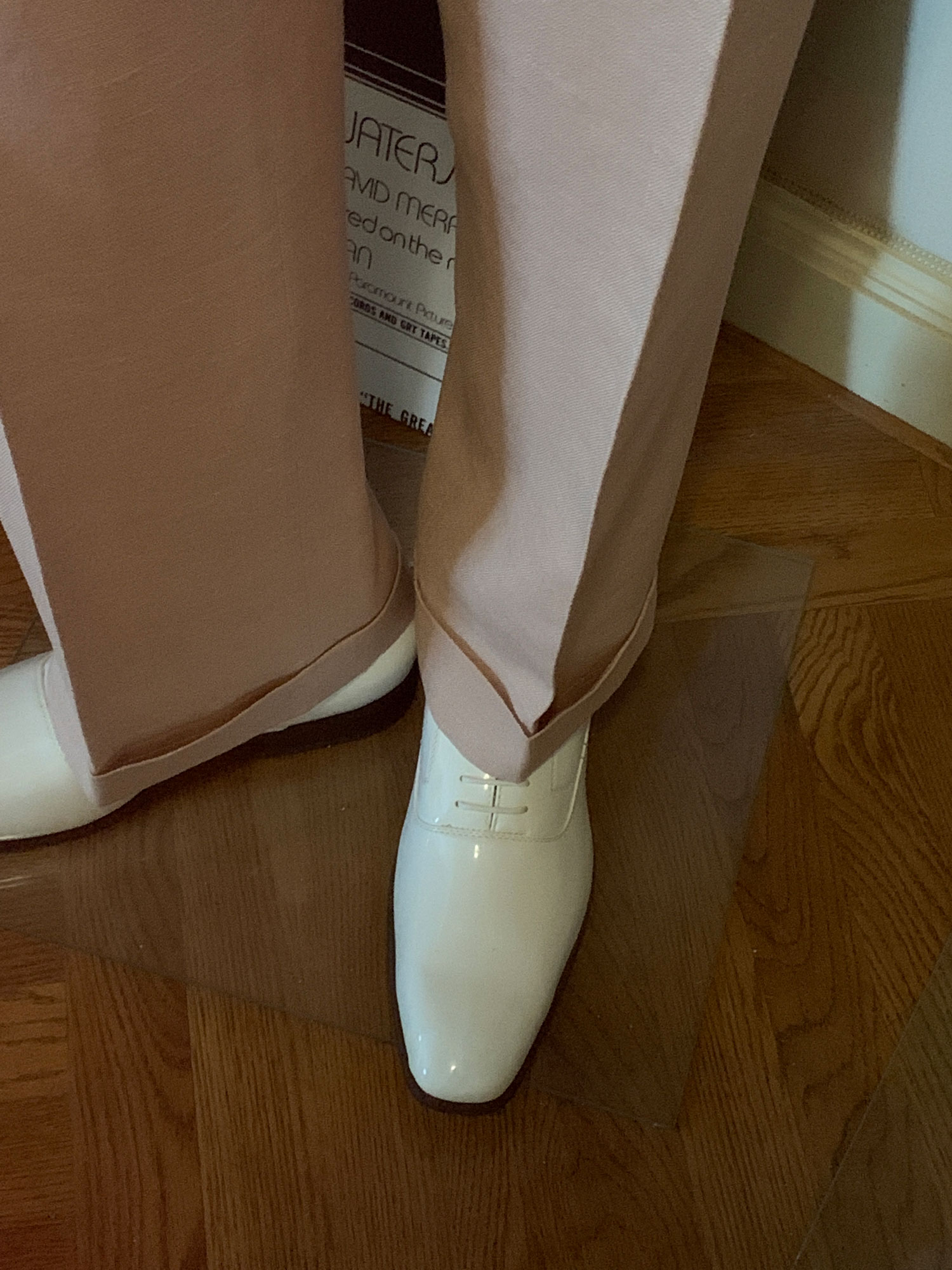 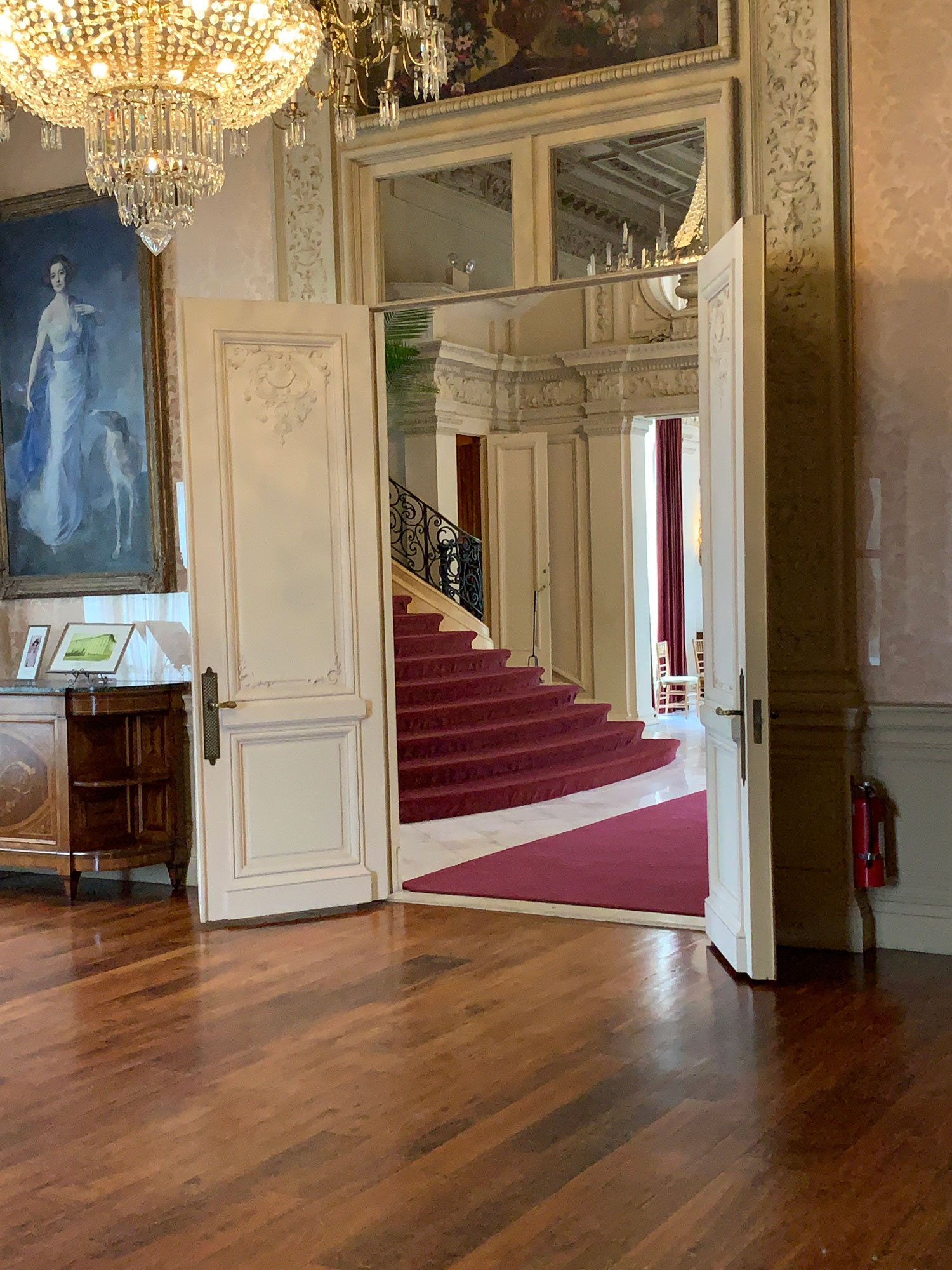 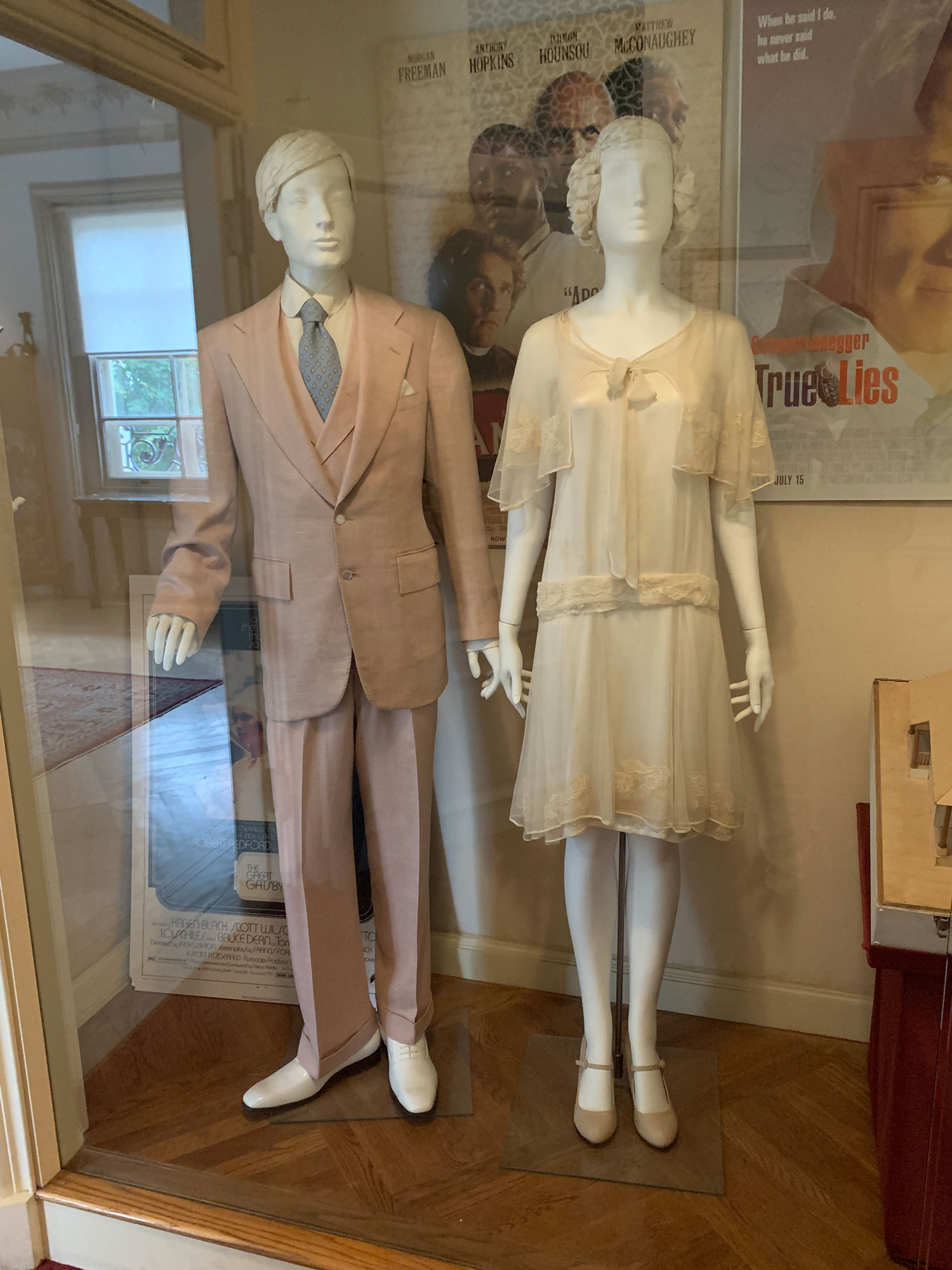 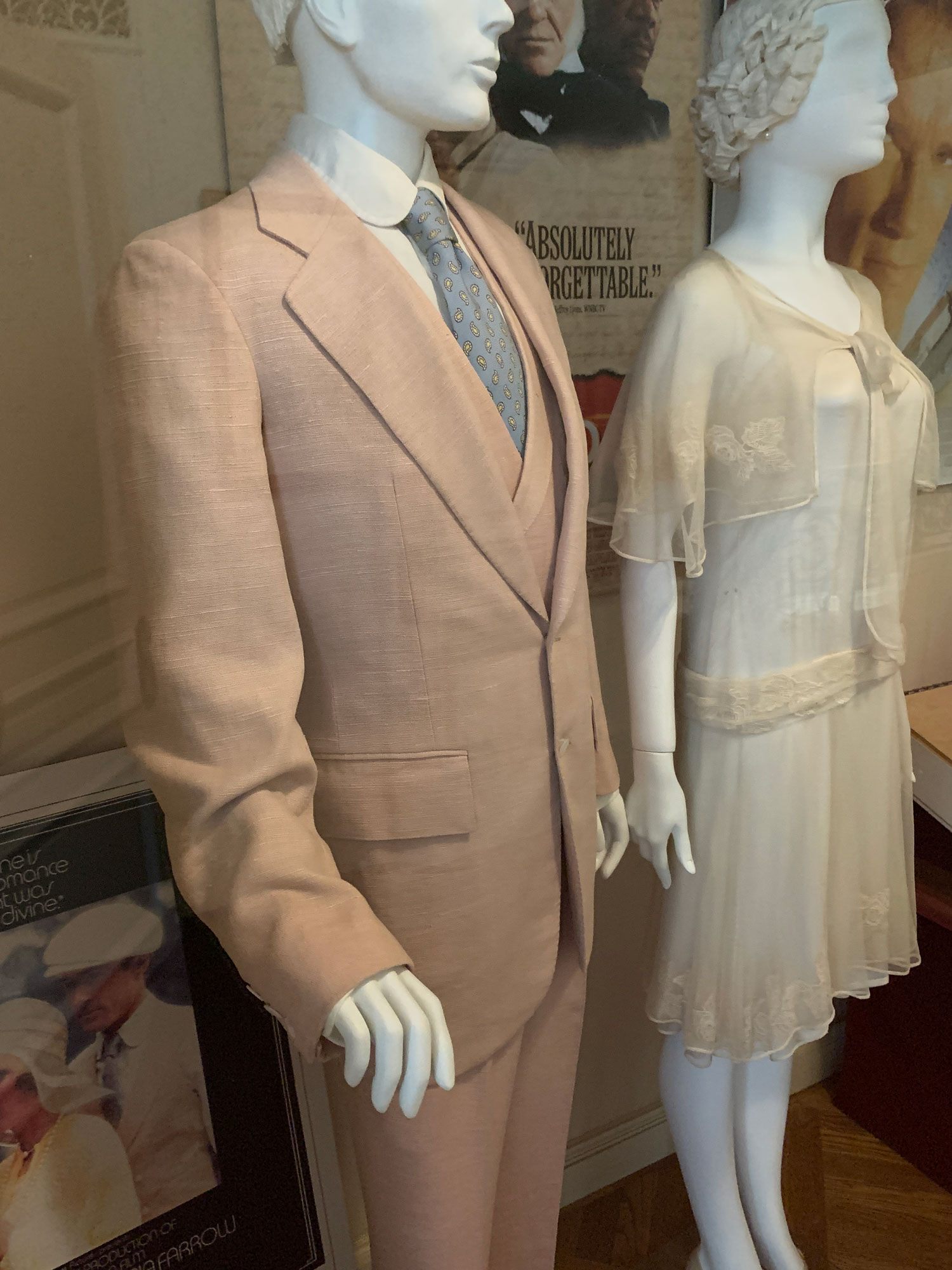 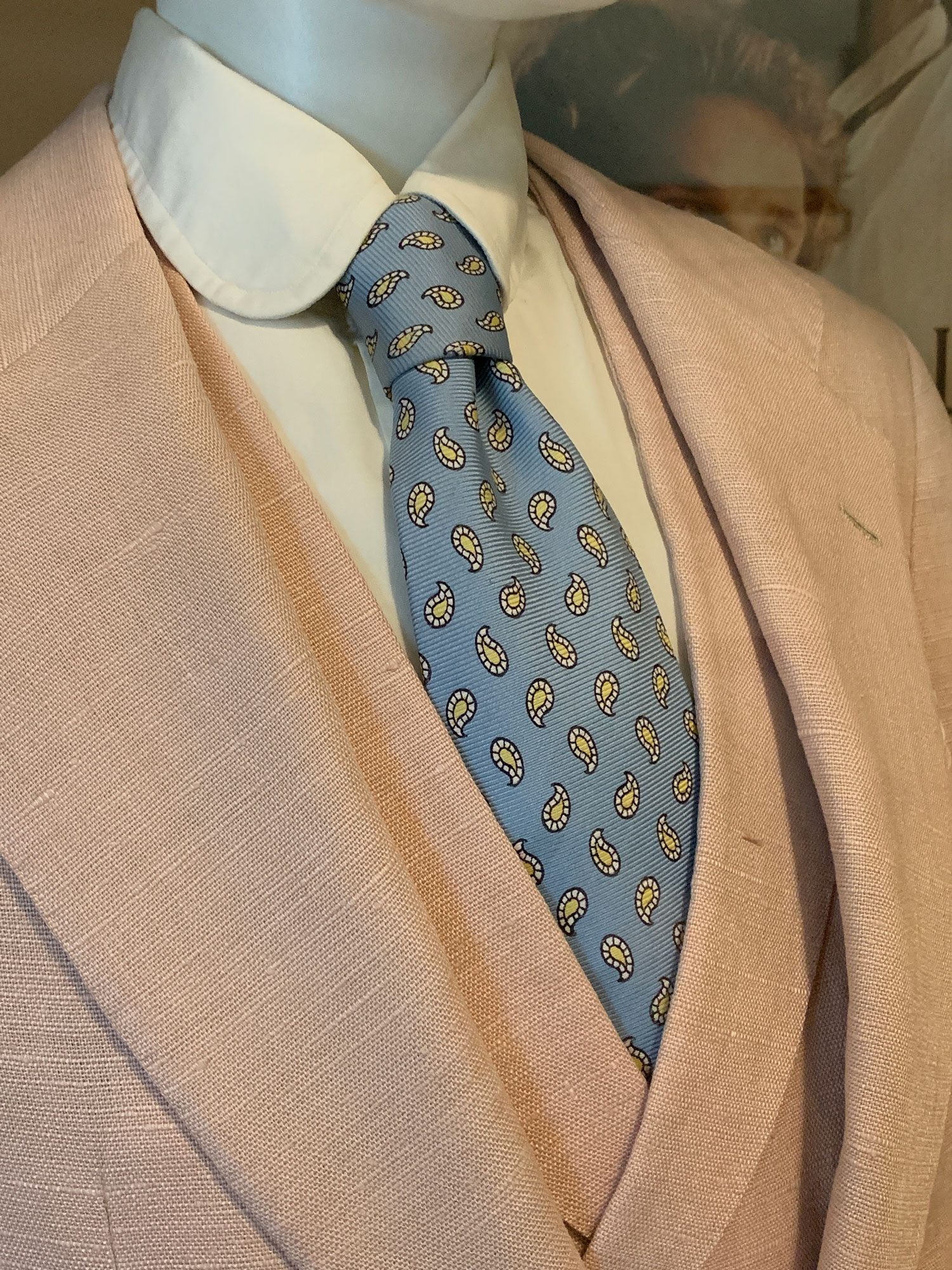 Inside Turnbull & Asser on Jermyn Street

Shop The Great Gatsby Silk Ties and shirts at Turnbull and Asser. The 1974 version of The Great Gatsby, based on the book of the same name by F. Scott Fitzgerald is available to buy on Blu Ray. (It’s in my collection). I absolutely recommend listening to the Audible version narrated by Jake Gyllenhaal if you get the chance. There is very little mention of clothes.

Next on my reading list is The True Behind-the-scenes Account of Filming the Great Gatsby Starring Robert Redford and Mia Farrow with 8 Pages of Exclusive Photos.