The Dezer Collection – And the James Bond Costumes

This Dezer Collection is the largest collection of James Bond memorabilia in the world and about a 40 minute drive from South Beach where we stayed.

You’ll forgive the low-res imagery. These are iPhone pictures compressed for the blog. You can catch the video I did in the YouTube video at the foot of the page. No need to subscribe, I post random stuff on that channel. 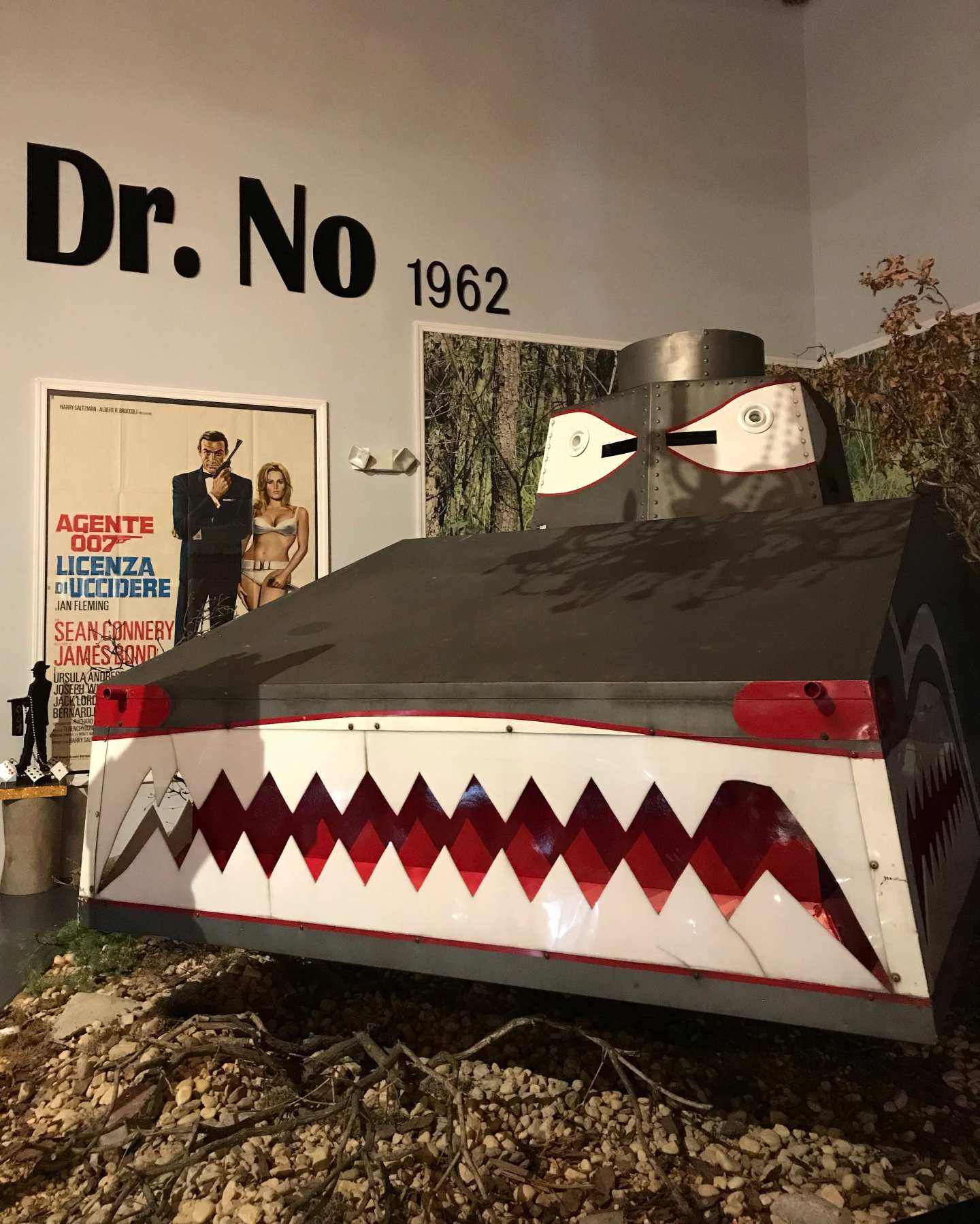 SO IS THE DEZER COLLECTION OPEN?

According to Matt Sherman on Facebook: “The Bond section is moving to Orlando! I will lead tours there after opening. Mr. Dezer and I talked about it–Orlando should be better attended than far north of Miami (Bal Harbour).”

Today I went on the website to find more information. All the social links are broken and the contact form is also unusable. I tried calling the number on the page and it came through to a wrong number. If anyone has any updates on whether this collection is still open to the public please comment below. 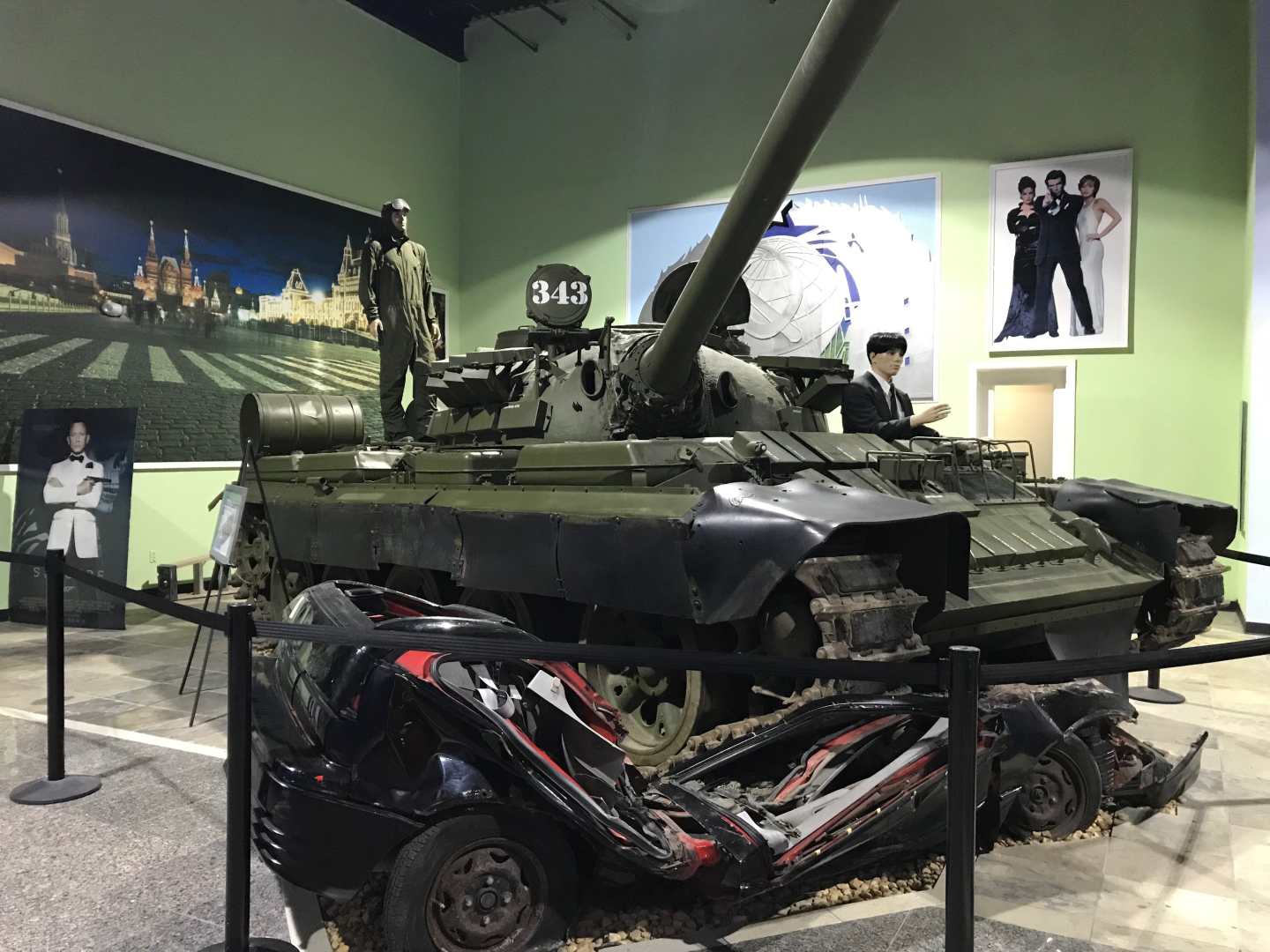 WHO OWNS THE COLLECTION?

Basically from what I’ve gathered he’s just built this collection over the years and couldn’t cram any more DB5’s in the garage so just bought some square footage and opened it to the public.

Inside you can also do trampolining, wall climbing, we didn’t do any of that but it looked like fun.

Apparently Mr Dezer struts around the place at least once a week. I’ve tried emailing him for an interview on the From Tailors With Love podcast but we’ve heard nothing back. 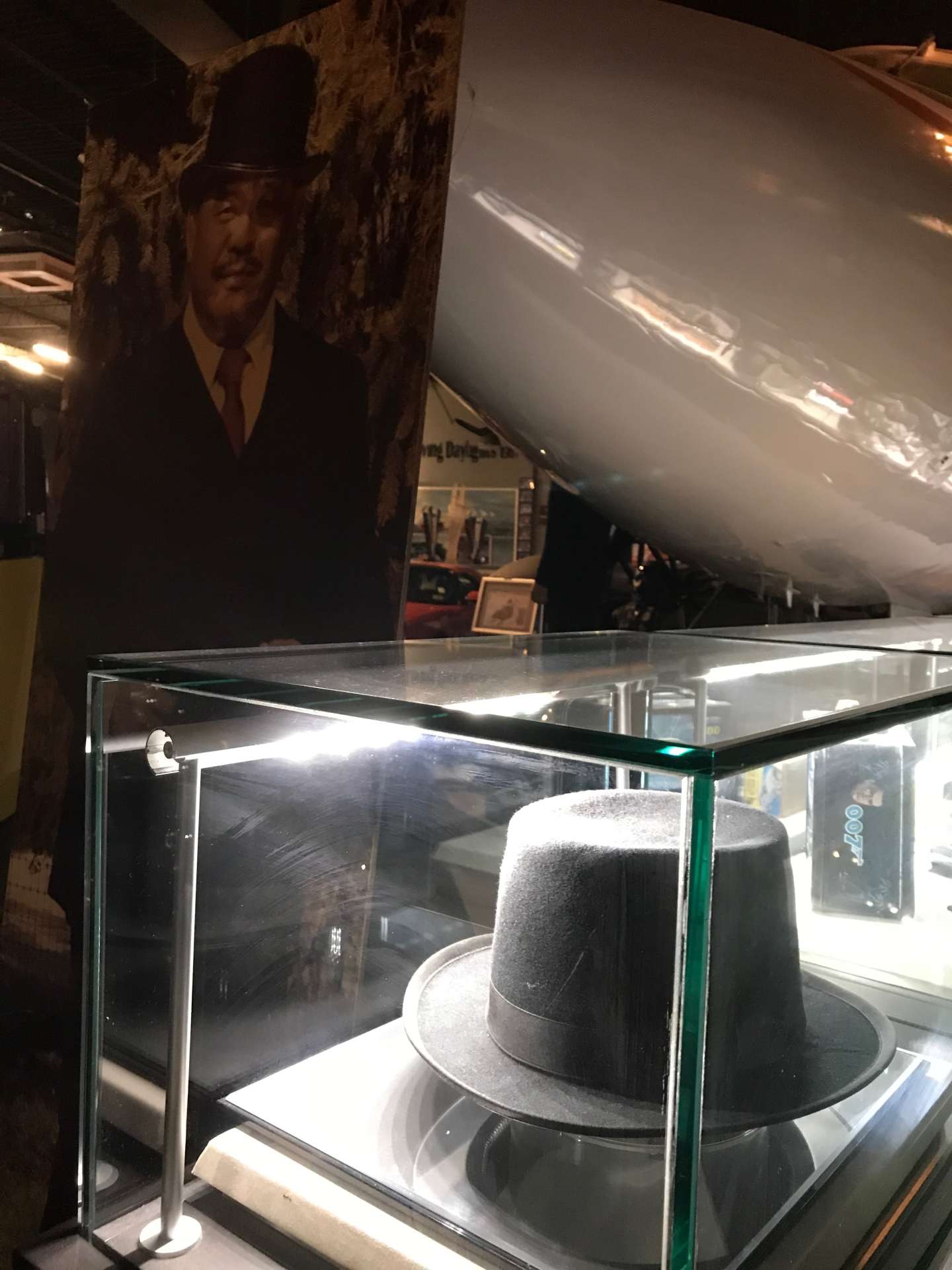 THE CLOTHES IN THE JAMES BOND MUSEUM

In the YouTube video at the top of the blog you’ll see the leather bomber jacket from A View to a Kill, no doubt that will have some of Rogers musk on it.

OddJob’s black derby hat is here, but that’s a replica. Who wrote OddJob’s favourite Bond theme? AH-HA. My Brother tells that gag better than I.

There’s apparently two out there. I know that Harold Sakata gave the hat to his son Jon Sakata, The other hat was sold at Christie’s in 1998 for $120,000. 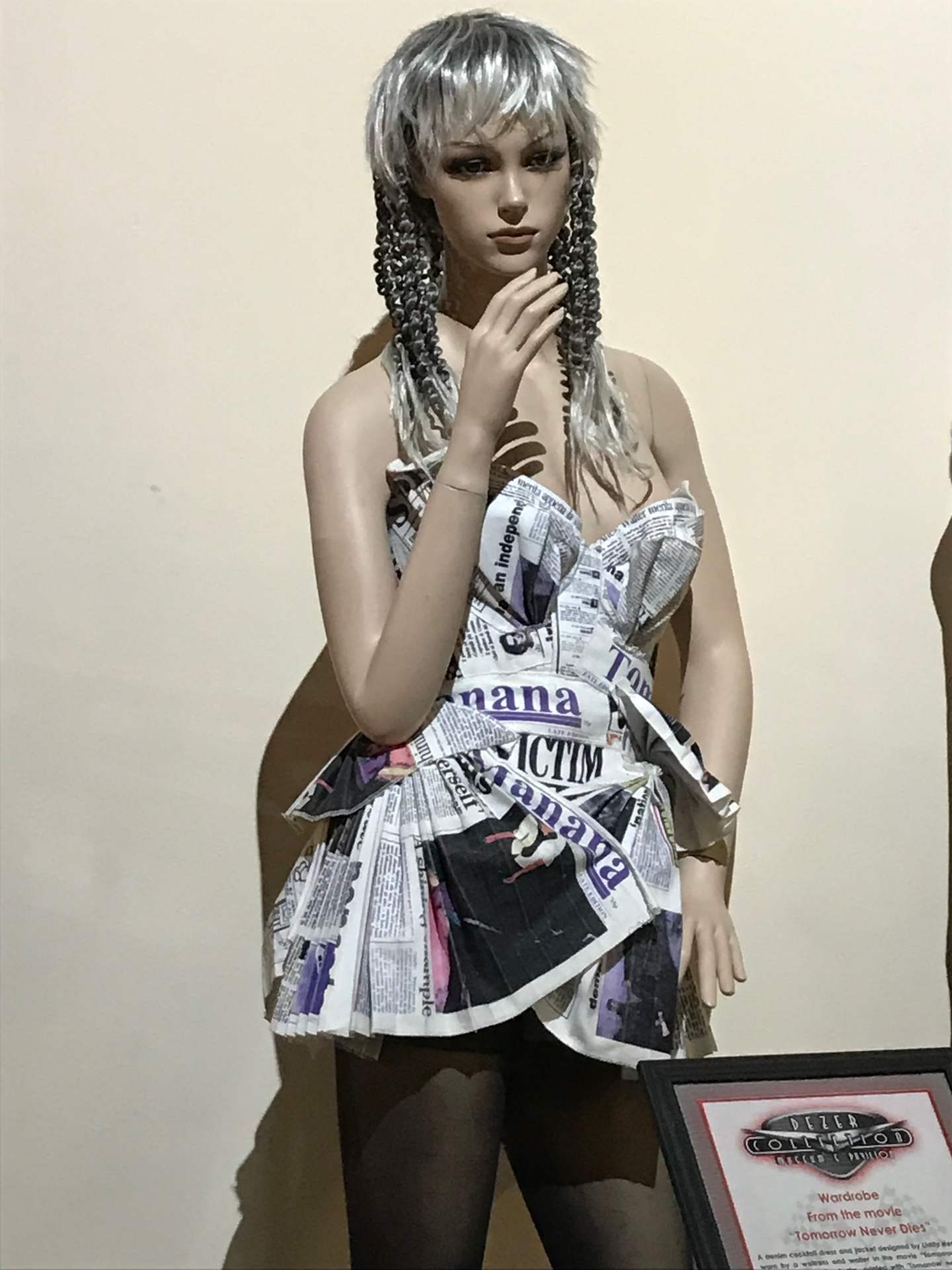 Above you’ll see a denim cocktail dress and below, a jacket designed by Lindy Hemming. These costumes were worn by a waitress and waiter in the movie Tomorrow Never Dies. Printed with Tomorrow newspaper clippings.

The dress is strapless, the bodice with lace up corset, the skirt composed of pleated panels joined in the front with additional pleated panels at the hips.

The underskirts of white tulle, the jacket with semi peak lapels, long sleeves and single button fasten at the front. 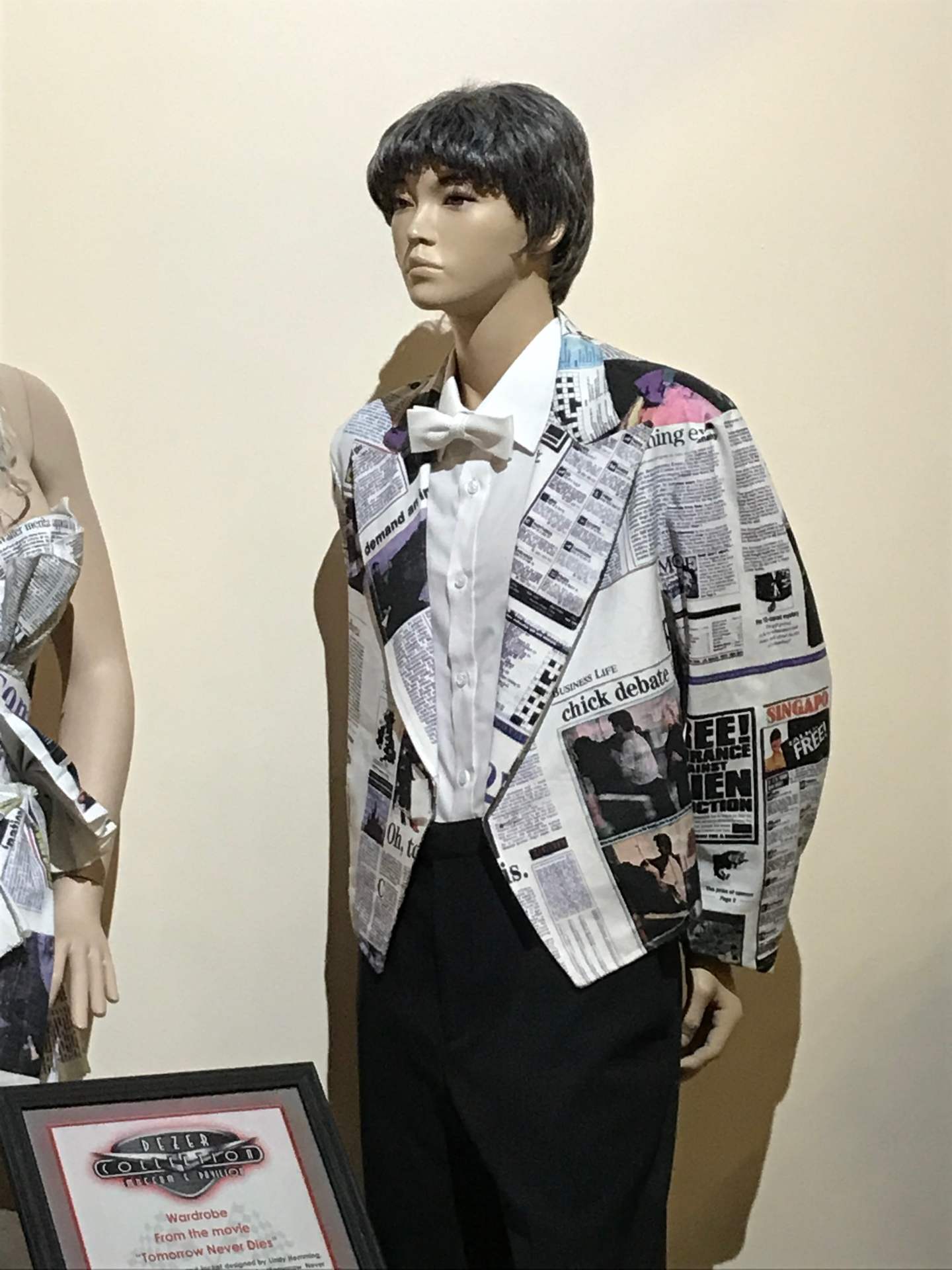 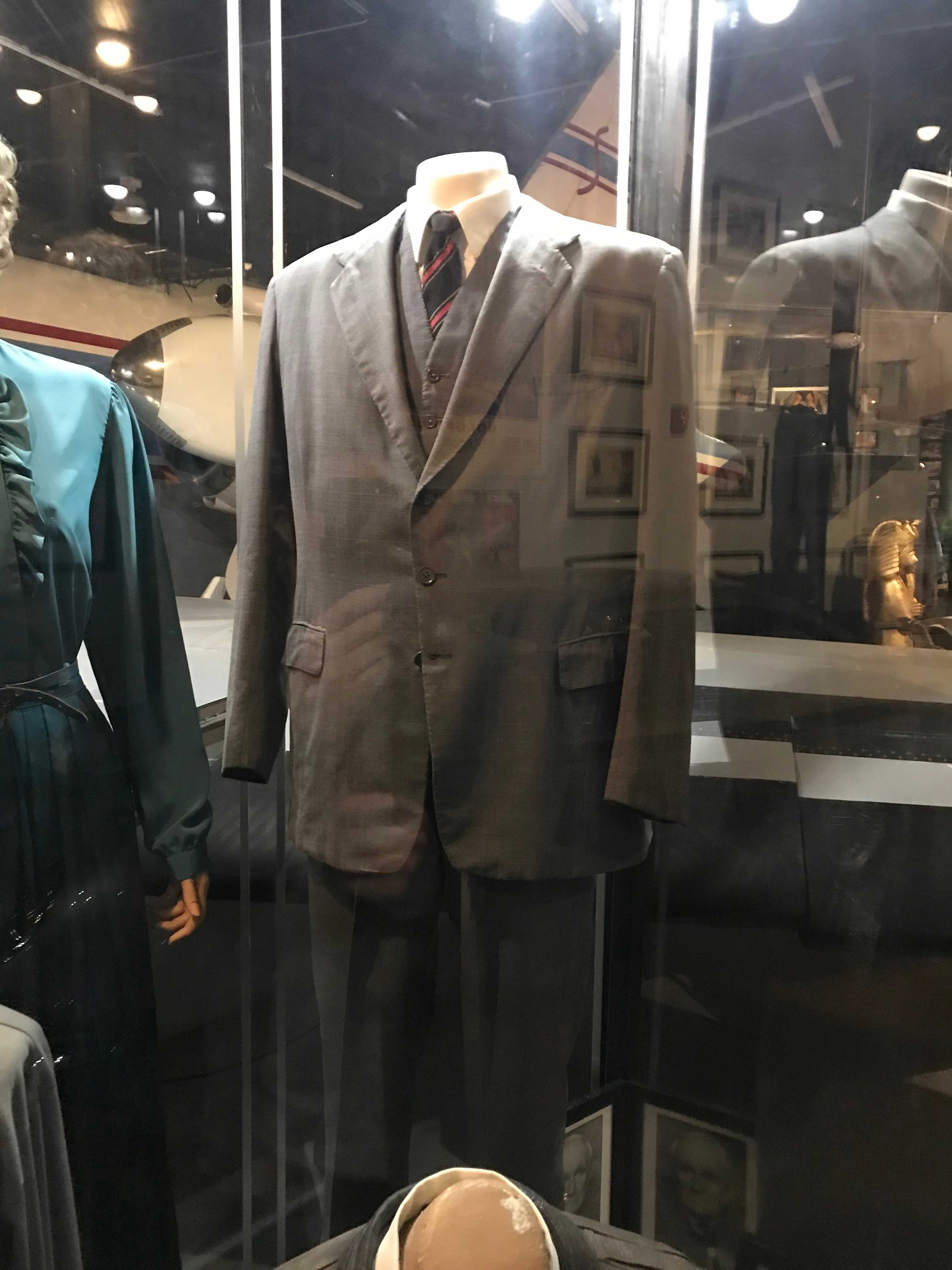 But which film please?

As ever the super efficient and encyclopaedic brain of Matt Spaiser has chimed in with his thoughts on the Q Suit.

“For the description I would say the lapels are a medium width. For them to be wide they’d have to be more than half the width to the end of the shoulder. The cloth is most certainly a worsted wool. The tie is striped, not chevron. The tie is the Order Radleian Boat Club tie, which appears in The Man with the Golden Gun and For Your Eyes Only. The suit trousers are most likely pleated, not flat front. He usually wore pleated trousers.

THE MAN WITH THE GOLDEN GUN 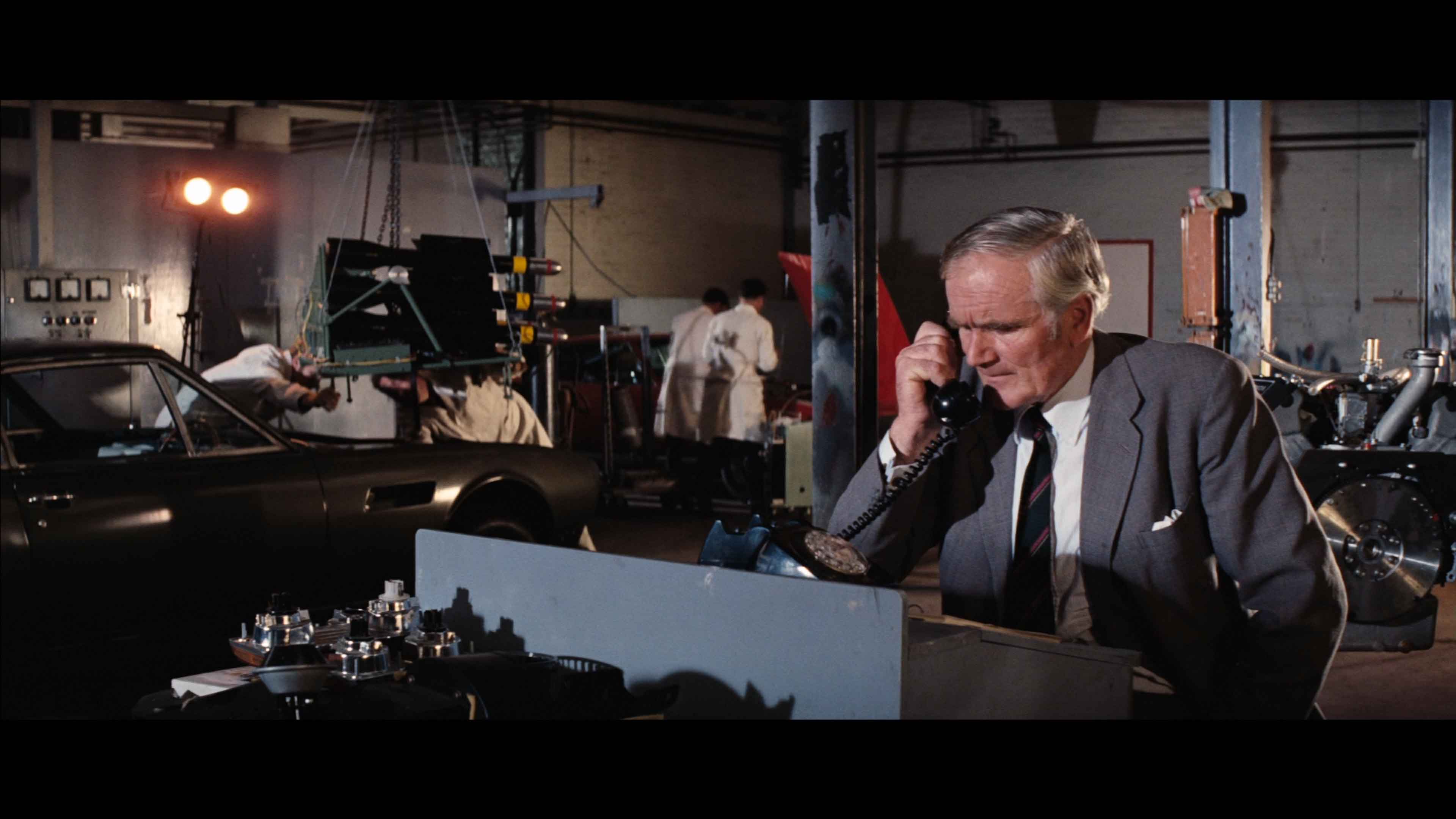 Q in The Man with the Golden Gun

The suits that appear in Diamonds Are Forever, Octopussy and Licence to Kill (I think all the same suit) looks like this one, but the check on those suits has a red border. Do you remember if, or can you tell from any of your photos, if this suit on display has that red border? (Answer = no). 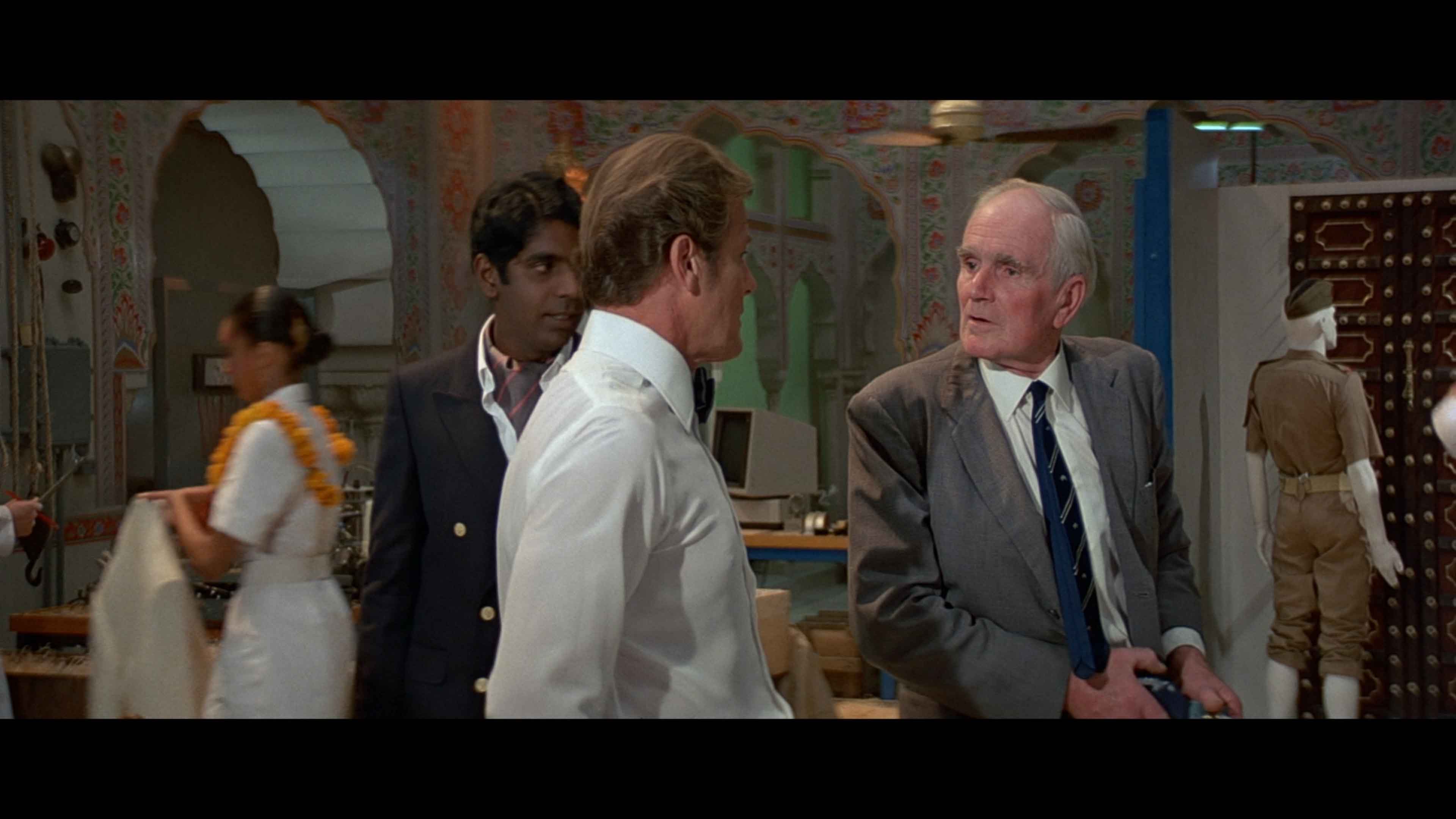 I can’t see it in any of the photos I took when I was there, but dim lighting makes it difficult. Q wears his suit without a waistcoat in those films because two of them take place in parts of the world much warmer than London.” – Matt Spaiser. 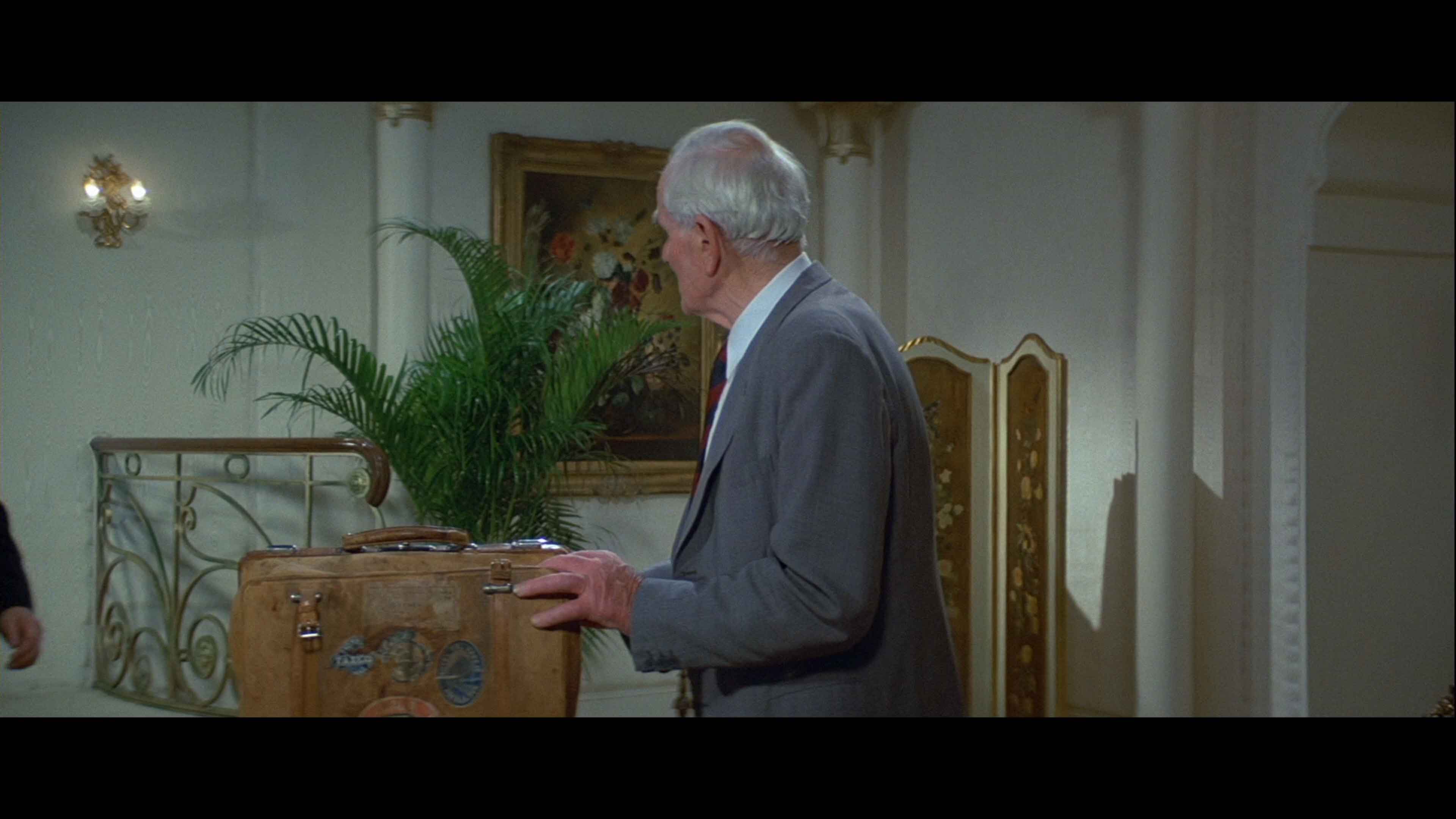 Q in Licence to Kill

Lois Maxwell wore this dress in Octopussy. Please drop me a note and let me know how best you would technically describe this dress.

I’m guessing a deep blue (although looks green in this light) wrap dress with a bib front, ruffle placket and collar. The sleeves are long and full, gathered at the shoulder and hem allowing for plenty of drape. The waist is cinched with a thin blue leather belt worn around the stomach and finished with accordion pleats to the ankle. Maybe. 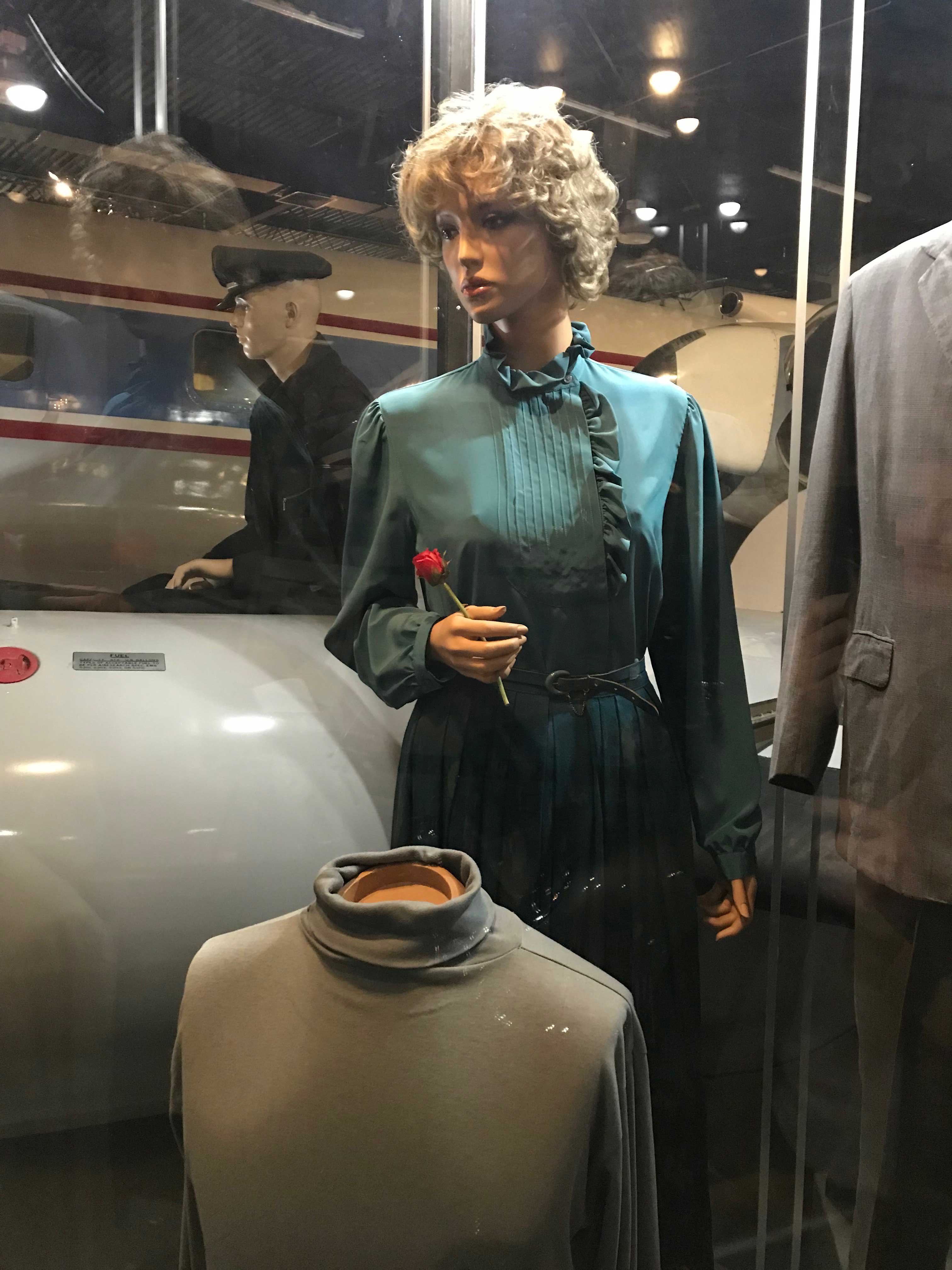 A View to a Kill Leather blouson

Matt Spaiser’s favourite all time jacket. This got an incredible amount of screen time. See throughout the entire San Francisco scene wear Bond breaks into City Hall and rescues Stacey from the fire.

I won’t attempt to describe the garment here as Matt Spaiser has done it so eloquently on his blog which you can read here. 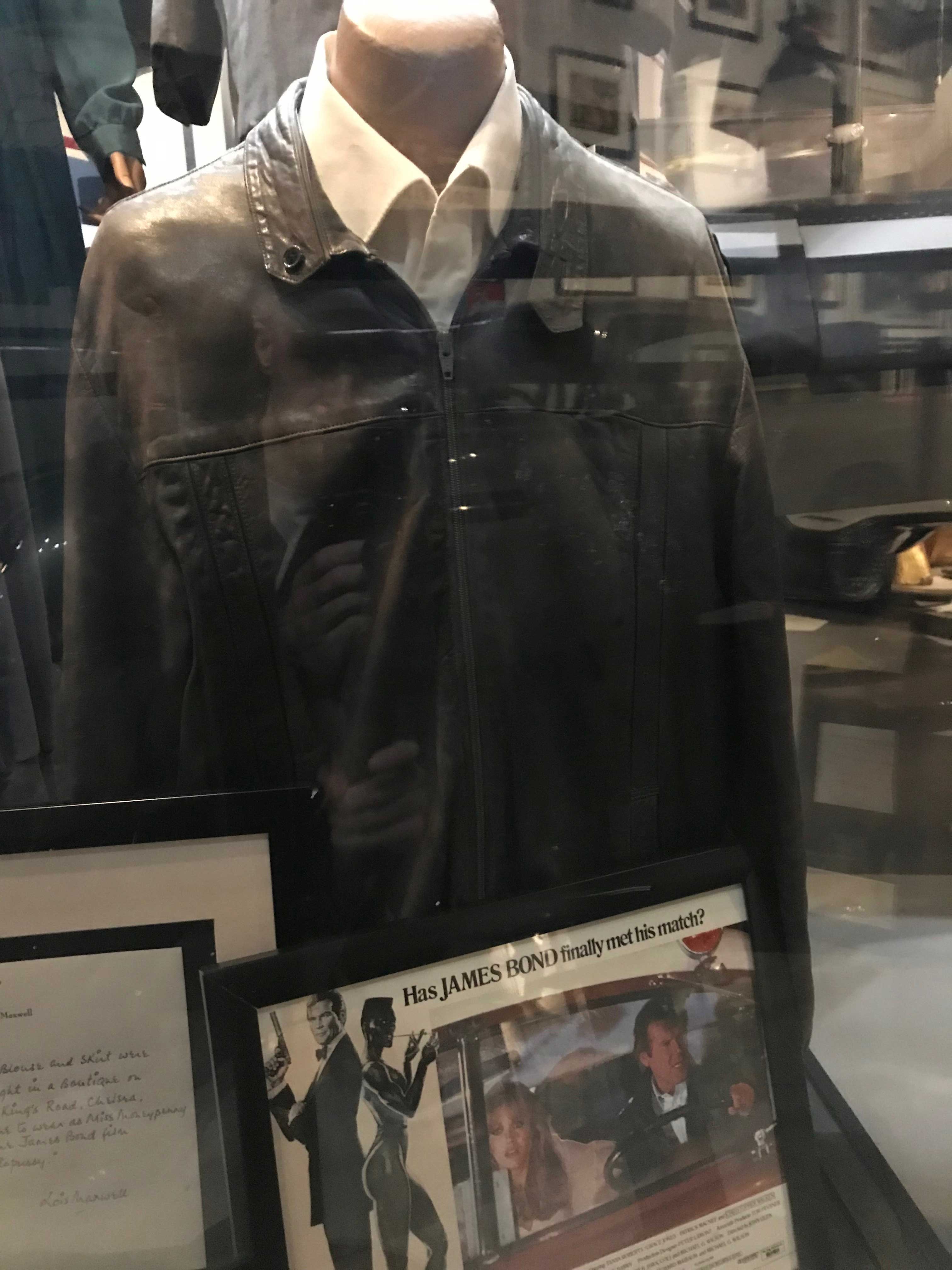 You see the astro plane from Octopussy in here. (I’m sorry I don’t have a photo).

There’s another one in the Back Factory in Berlin by Check point charlie. Not sure where the real one is. Below are some movie props I’m sure you’ll recognise. 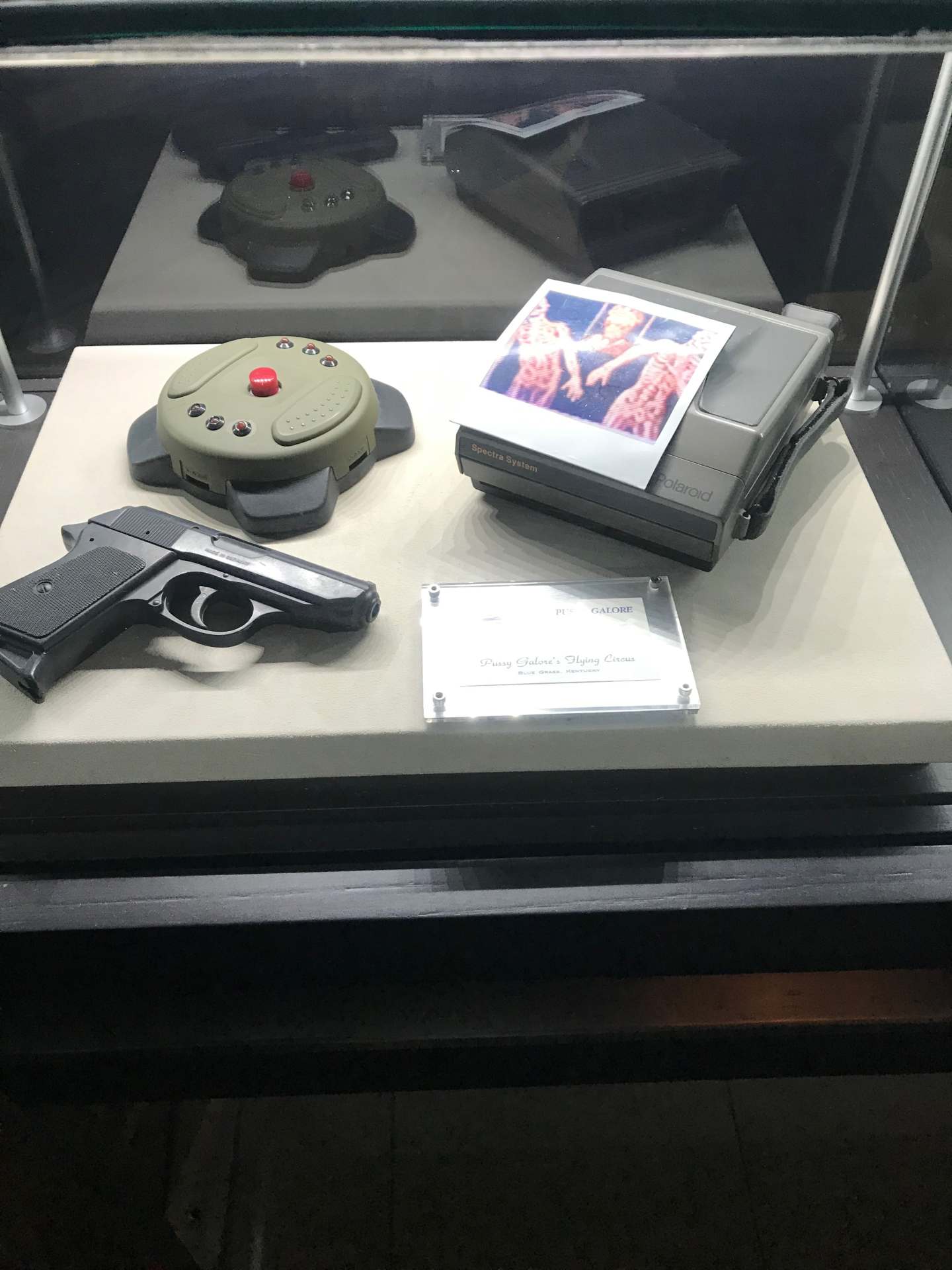 Moving along to the Goldeneye fruit machine, would be nice to see it plugged in. I’d easily bung a couple of quarters in. 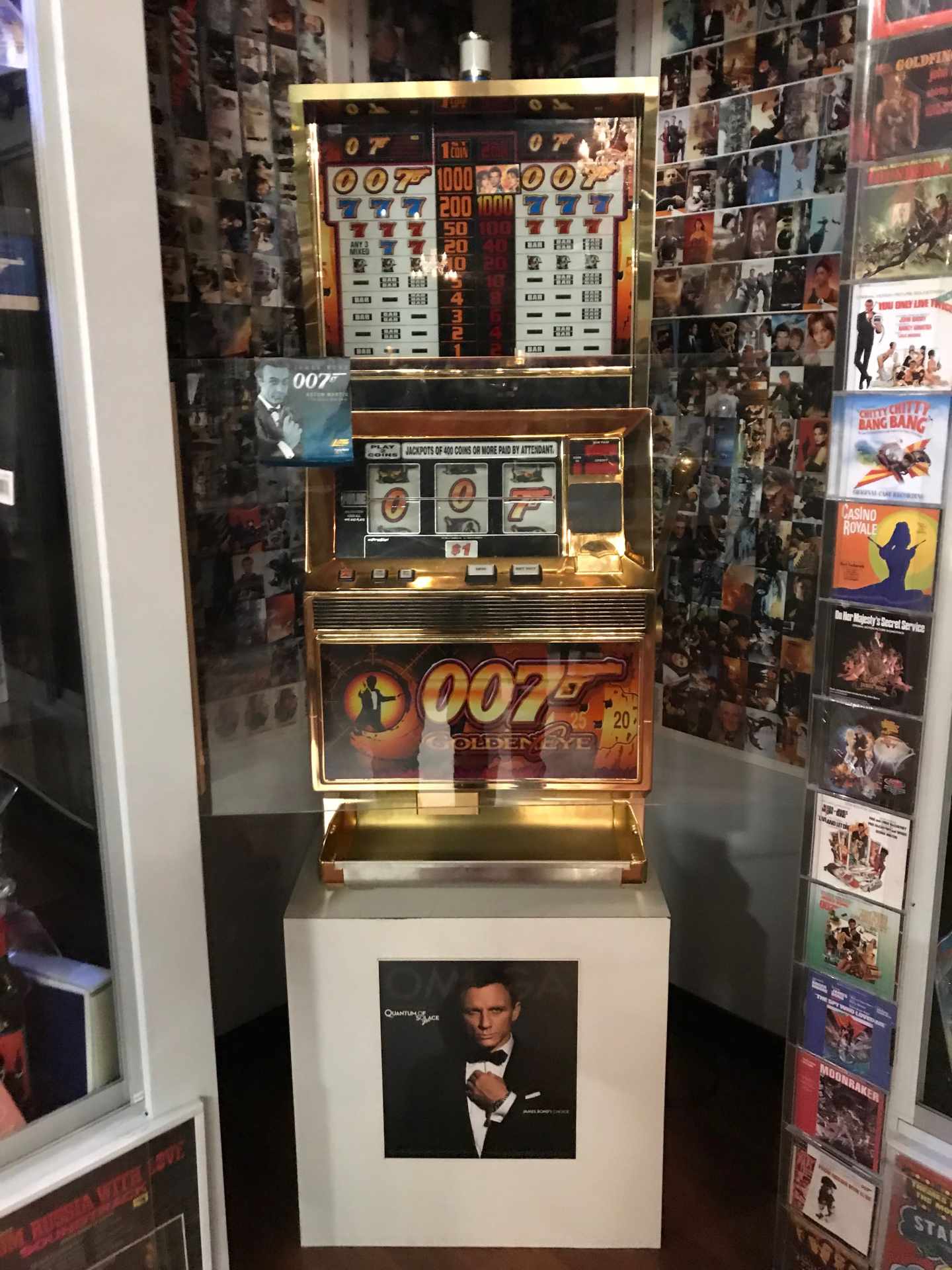 THE CARS INSIDE THE DEZER COLLECTION

The Toyota 2000GT from You Only Live Twice is in there.

One of my favourites is the Aston Martin V8 (see below) from The Living Daylights and will now be seen in No Time to Die. I love this car, the shark nose. The long grill. Has some real menace to it this car.

The Lotus Esprit from The Spy Who Loved Me is also there. 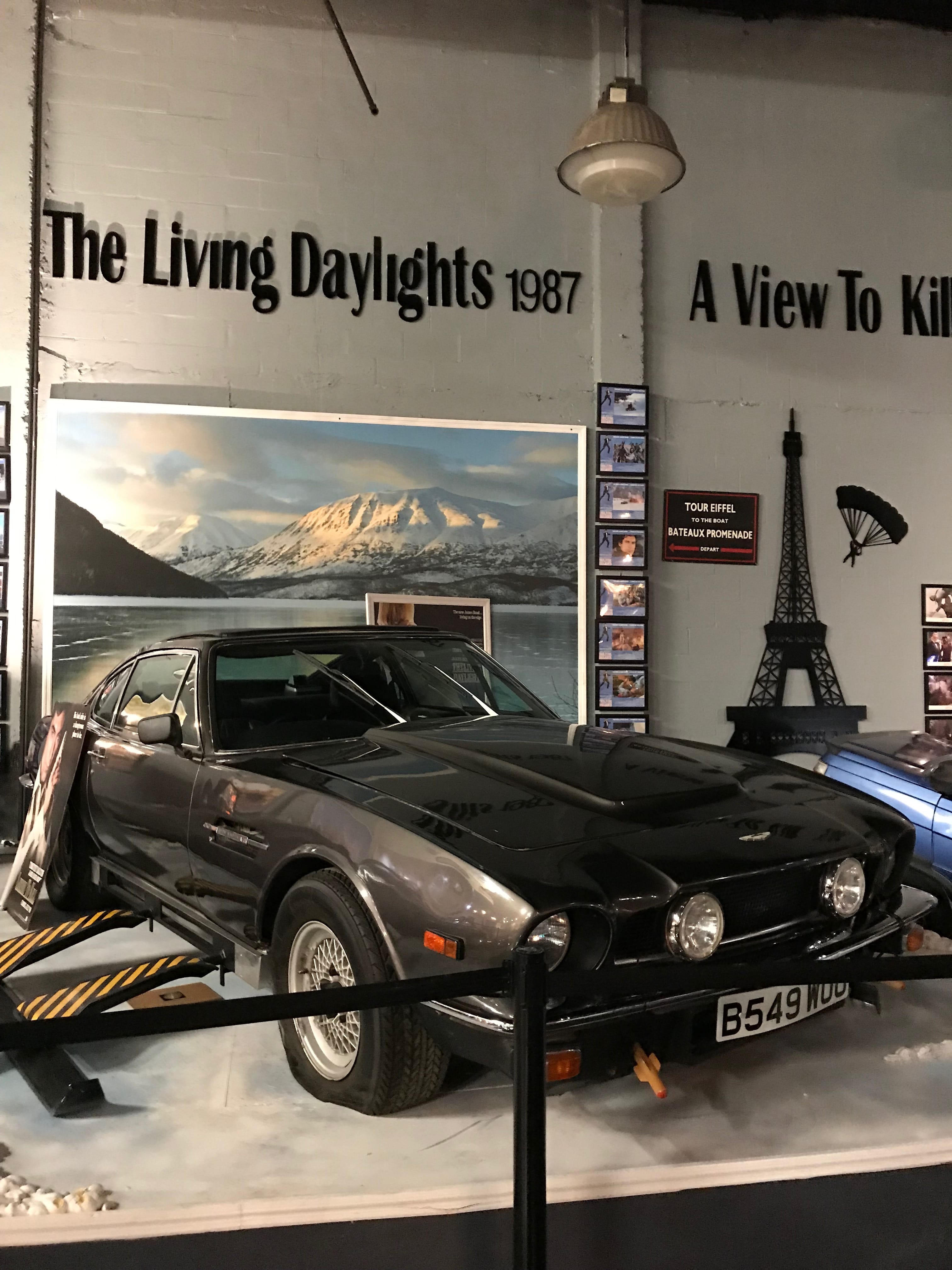 The Mustang Mach 3 from Diamonds Are Forever is in there. Of course famous for one of the biggest continuity errors, going in a pedestrian alley on two wheels in one scene, leaving the alley on the opposing two wheels.

This was down to a few factors. One being the first was shot in the studio, the second was shot in Vegas.

They had originally got the shot on the correct wheels, but there were people in the background watching it being filmed so they had to re-film it.

When they did, they screwed it up. They tried to fix the edit but it makes no sense. 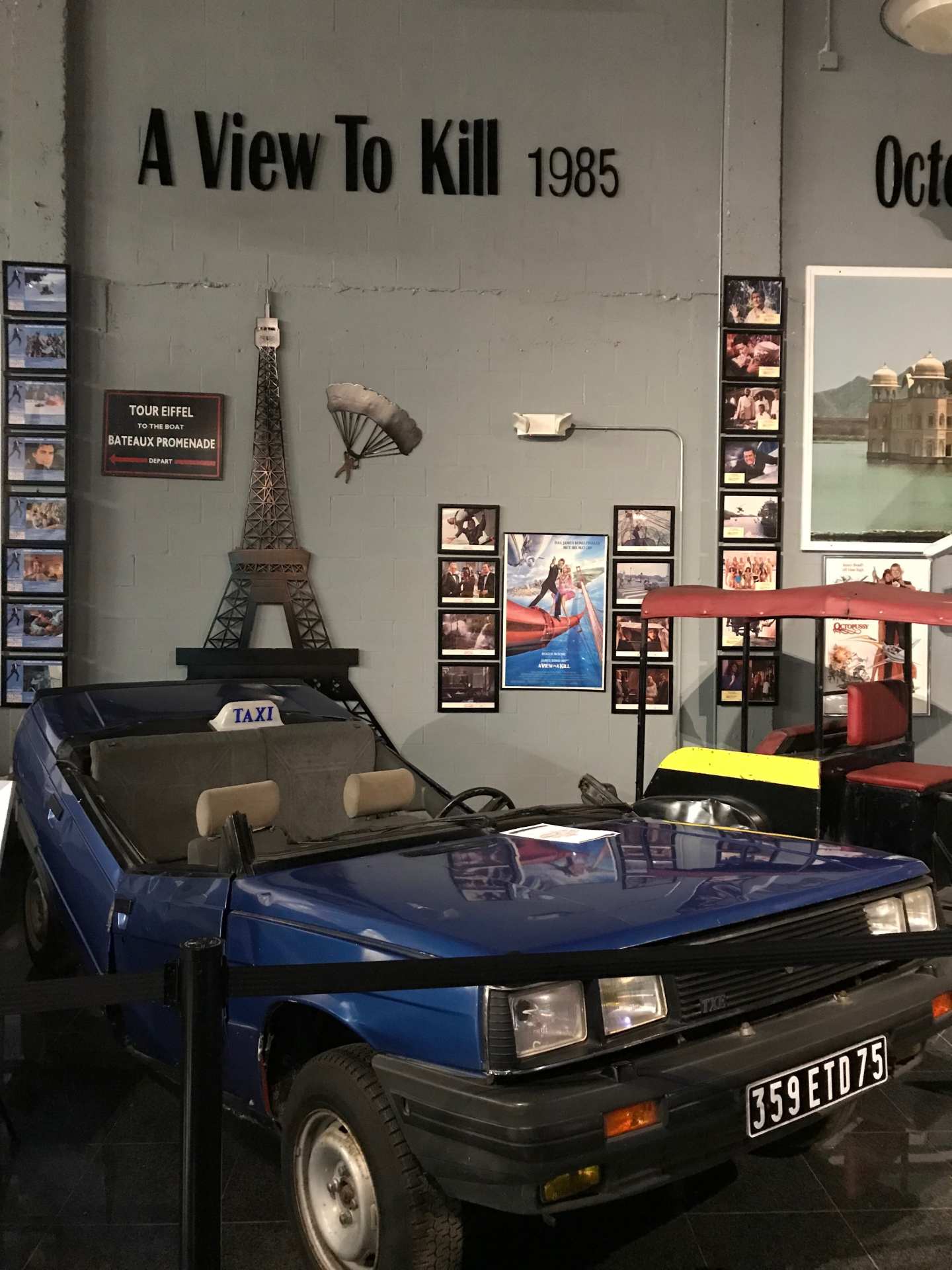 ALSO IN THE COLLECTION

The 1970 Triumph Stag from Diamonds. The original AMC Matador from The Man with the Golden Gun. (See below). 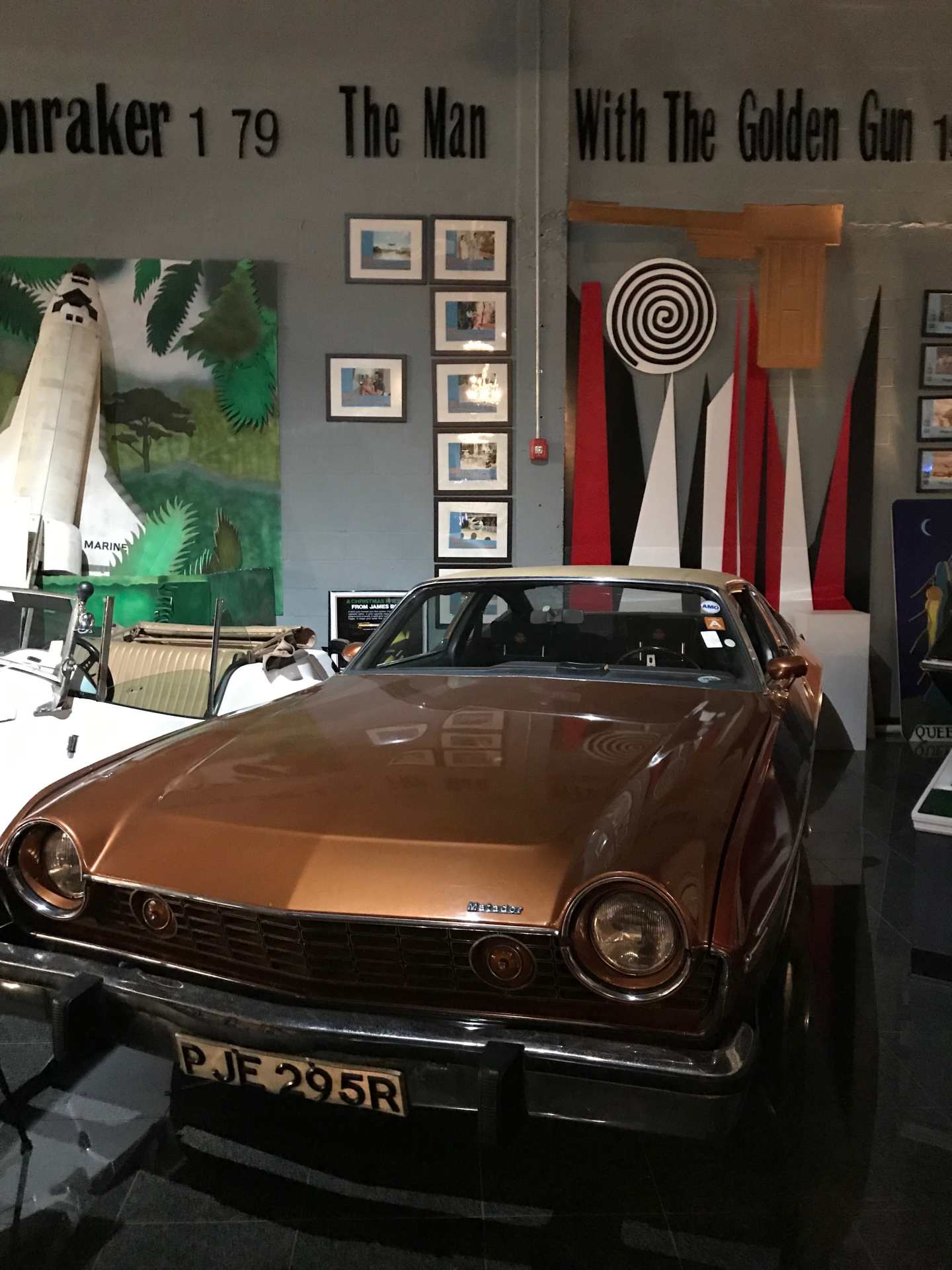 The AMC Hornet is also here. The cork-screwing car jump this was first demonstrated in the American Thrill Show in Houston, in 1972.

Cubby Broccoli then took out copyrights and patents on the stunt in order to prevent it being used before they could integrate to a James Bond film.

Citreon 2CV from For Your Eyes Only is here. 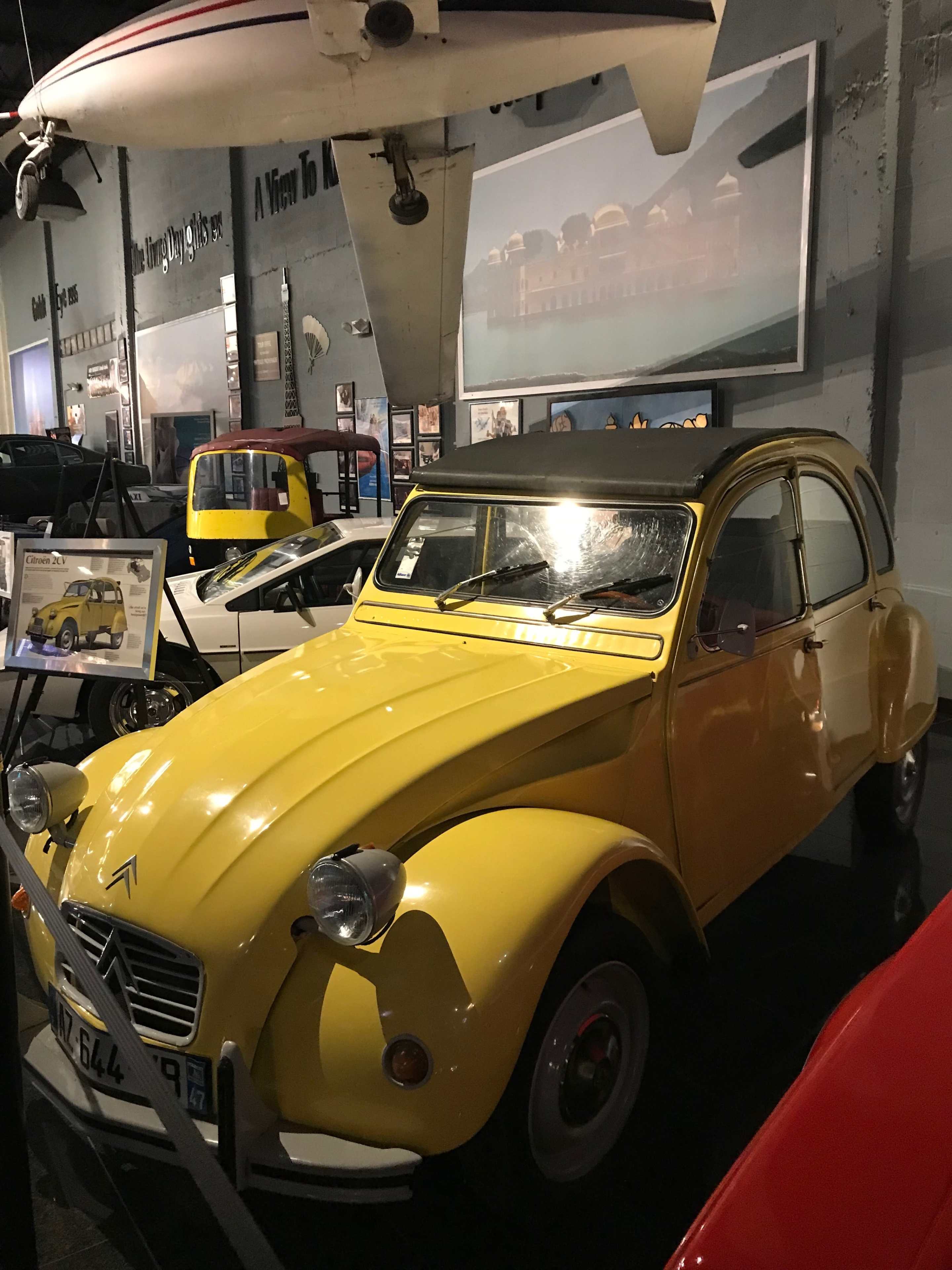 Lastly, if you’re a James Bond fan then I run a podcast with Matt Spaiser from The Suits of James Bond called From Tailors With Love. You can follow us on Twitter, iTunes or Stitcher. 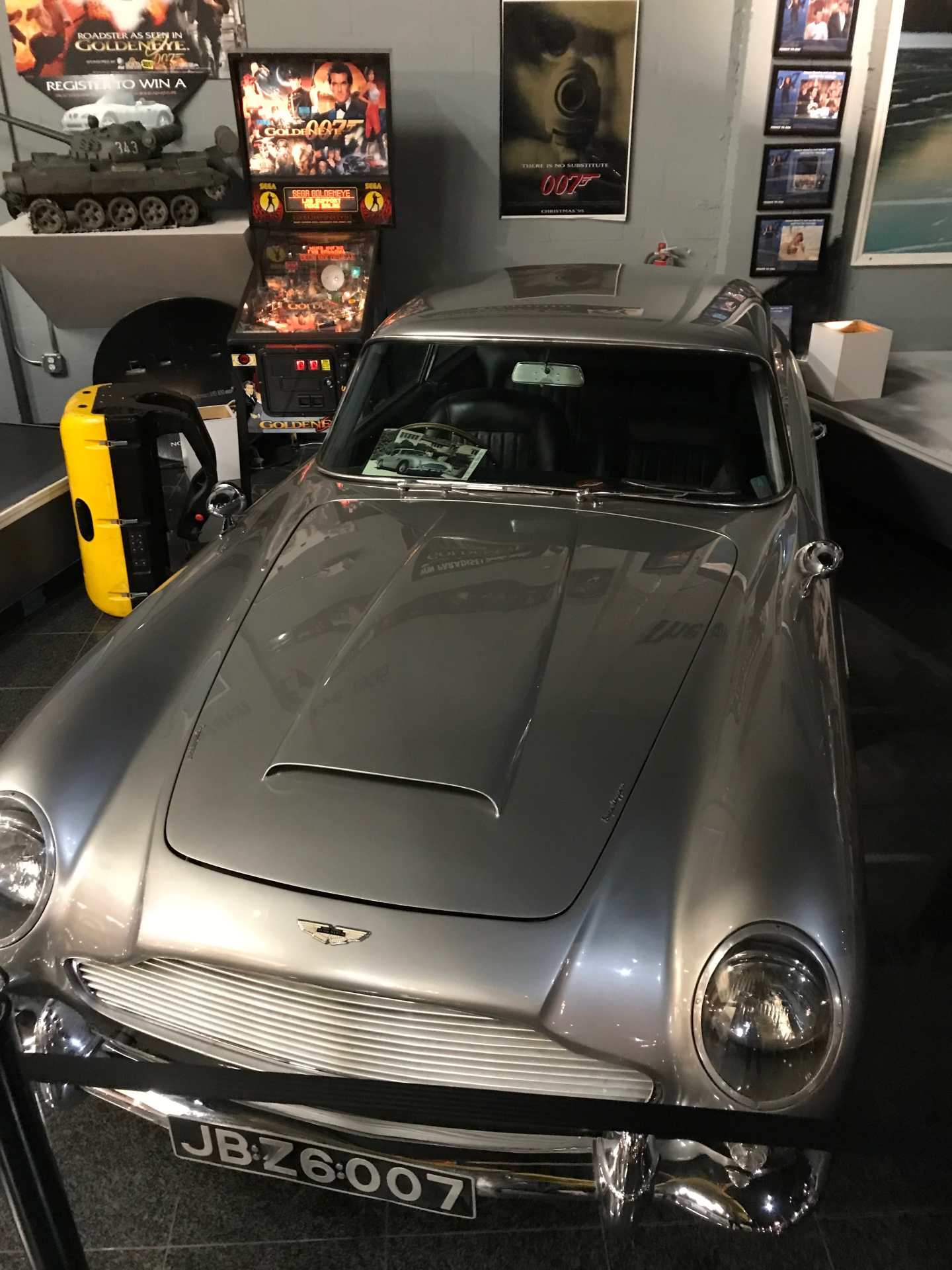 I hope you enjoyed this article on The Dezer Collection. If you want me to carry on doing more articles like these then show your support and subscribe to the Newsletter here.