Water in a Bollinger Bar, not very Bond like. 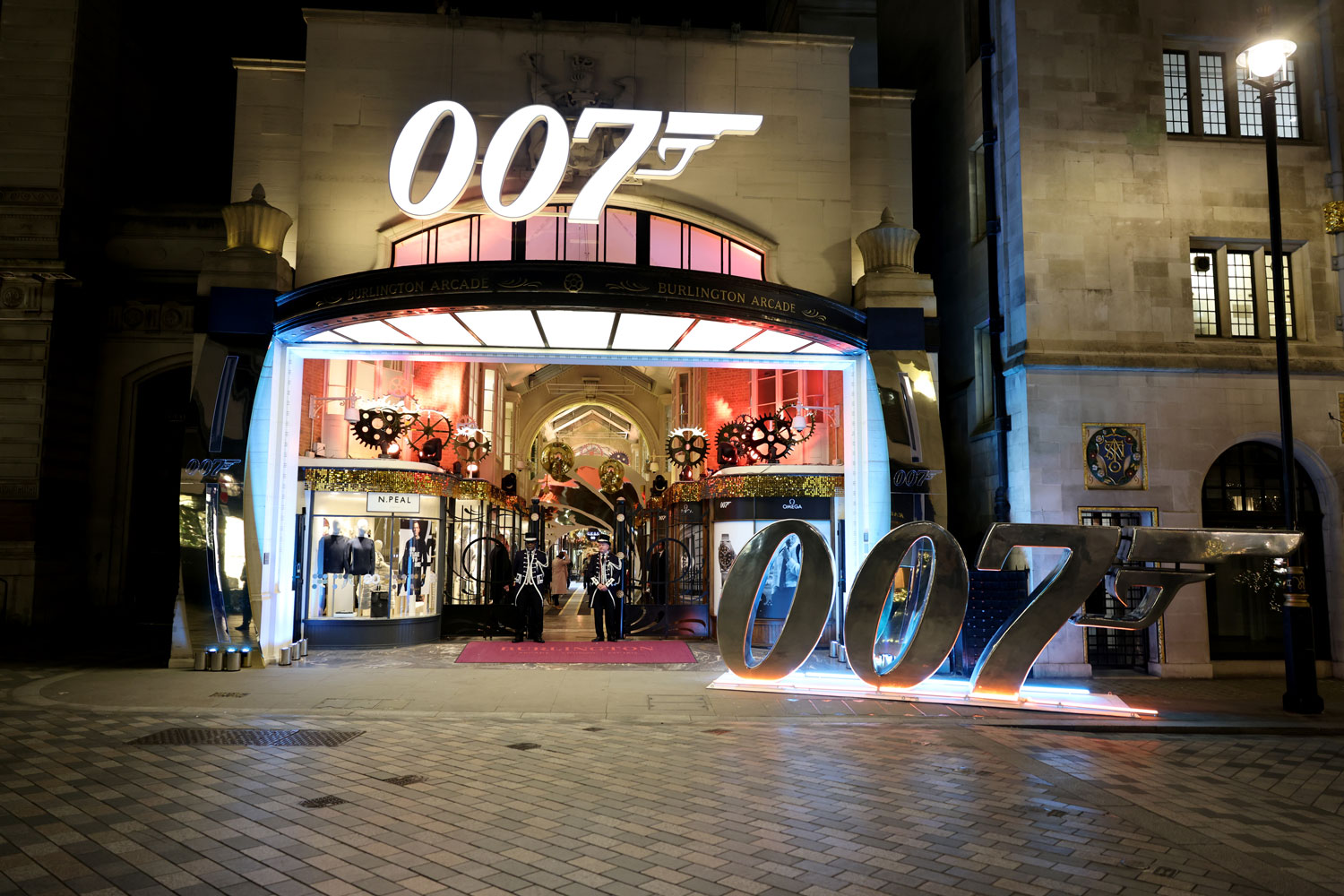 On behalf of The Bond Experience I was invited to the Burlington Arcade to see in the 60th Anniversary Celebrations of the James Bond franchise. I’d taken many trips down the arcade over the past month or so, and in truth there was really nothing new inside the arcade that I hadn’t seen before. God I’m spoilt.

The mini DB5 inside the Bollinger Bar was still there. The Omega Museum of course and the mirrored Gun Barrel which is the main centrepiece that you walk through is still impressive. 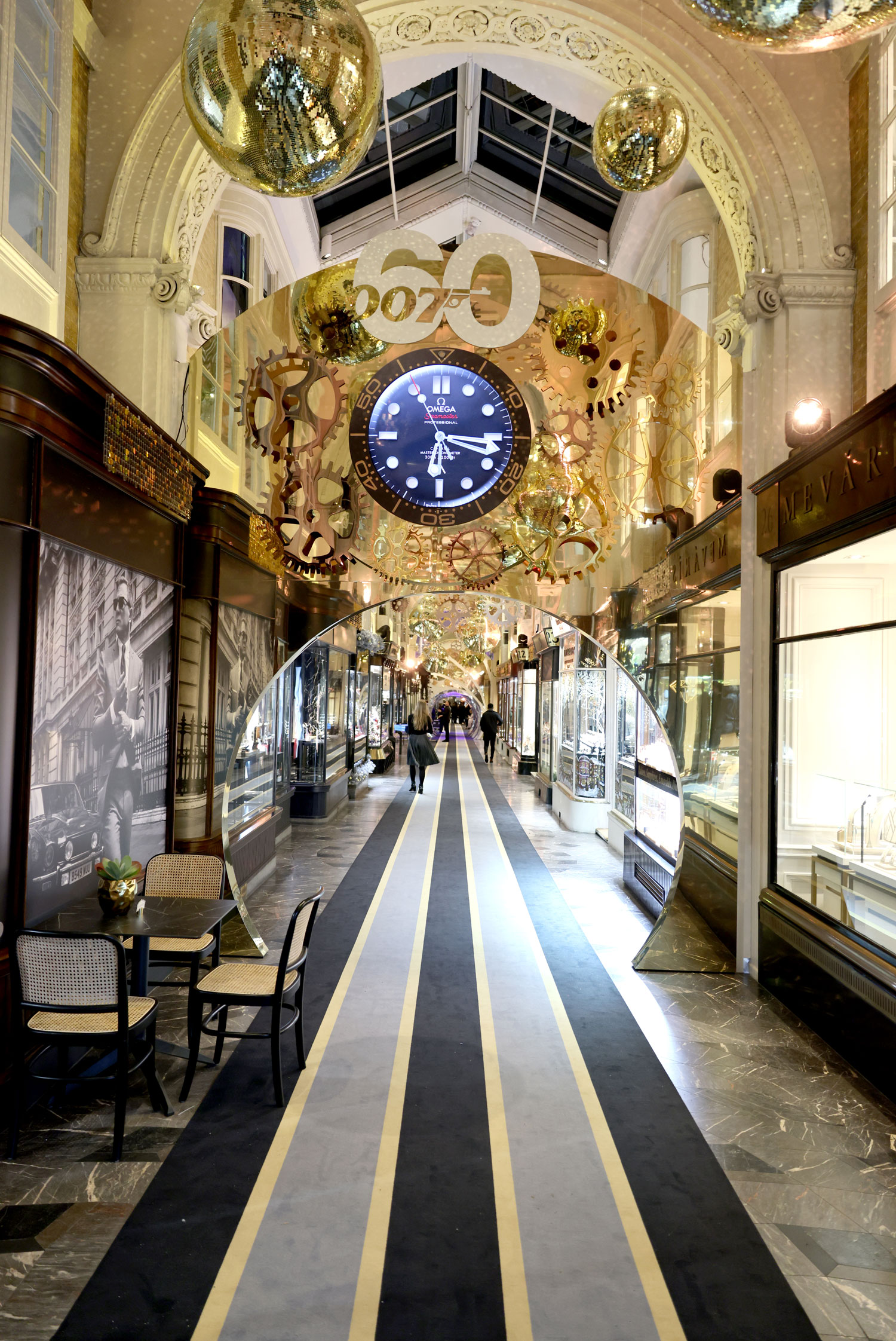 Ellie Goulding walked by with an aura of excitement, fuss and with whispers of ‘That’s Ellie Goulding’. I of course, being old man Brooker didn’t have a clue who she was. But she looked very fetching. Wait fetching? Now that’s old. 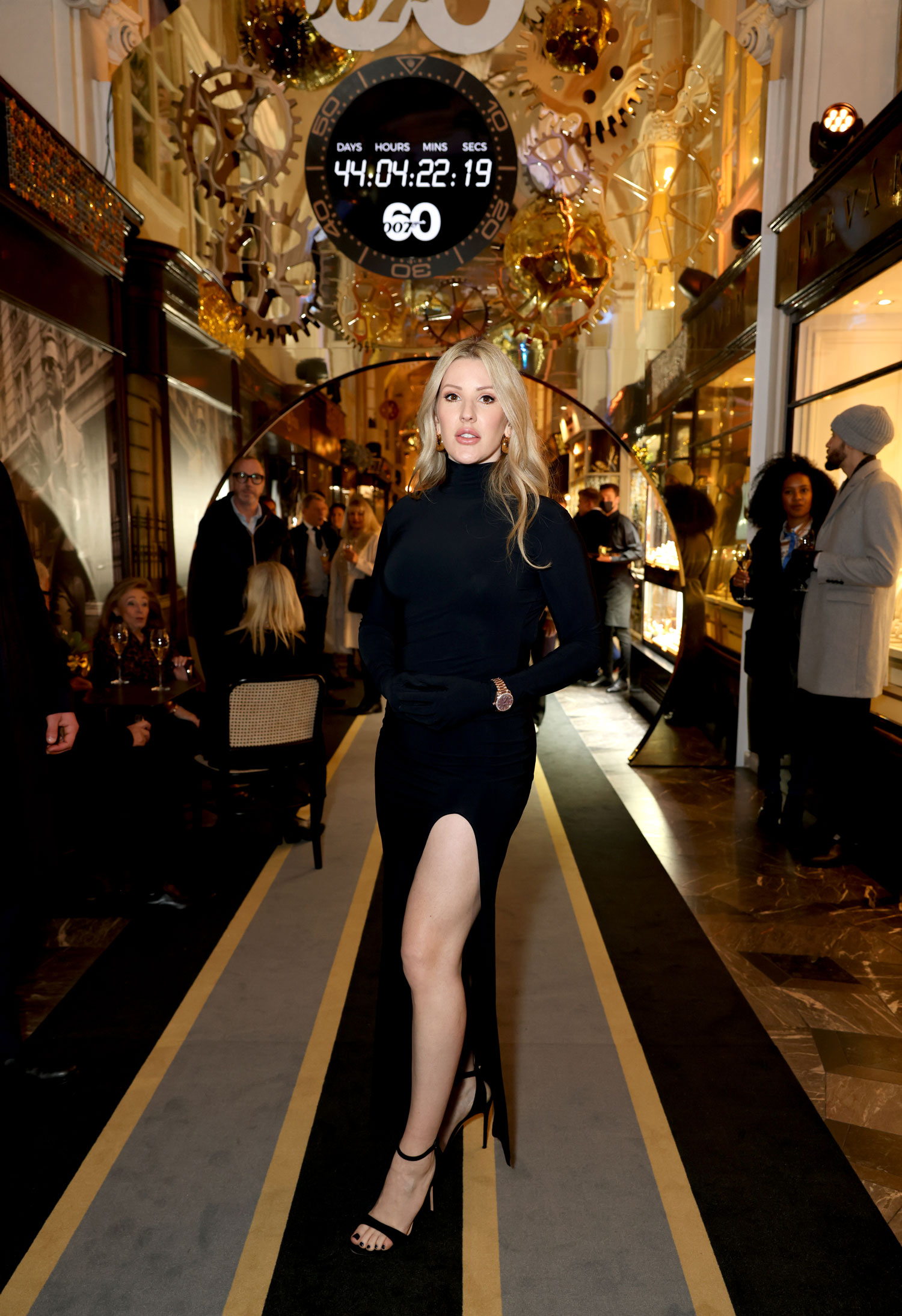 Ellie Goulding attends to celebrate the 60th anniversary of James Bond at The OMEGA Bond House in Burlington Arcade.

I met with Z from Tie Another Day and we ordered water which got a perplexing and disappointing look from the barman. Water in a Bollinger bar. Not very Bond like. In fact I hadn’t felt that far removed from Bond since I informed Anastasia that I wanted to take up Scrapbooking. 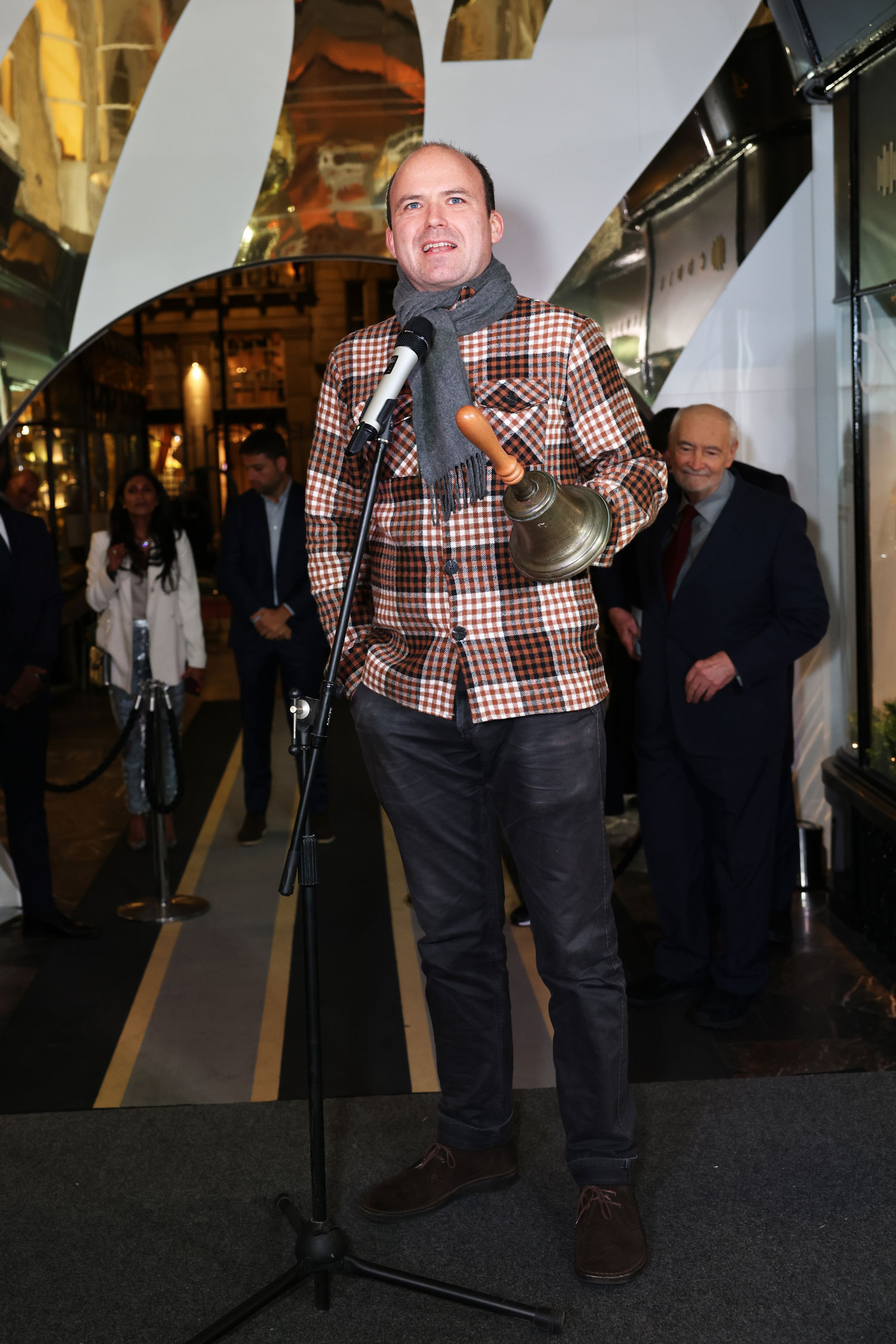 As Z and I assembled our various pieces of new tech (Wireless RODE microphones and a Selfie Stick) Rory Kinnear wonders by and is quicky chauffeured upstairs before we get a chance to embarrass ourselves for a selfie. I’d managed to get through 42 years without the need of a selfie stick, often citing it as the bain of society and the excalibur of vanity. But as Blofeld would say, finally here we are.

I bumped into a nice gent called Bjorn who showed me some of his photos of wedding in Estoril where George Lazenby was in attendance. Bjorn mentioned that George was a delight, contrary to other stories I heard that he behaved like an asshole.

At the end we shuffled down to see Michael G. Wilson do a speech to mark the anniversary. It received a great cheer. 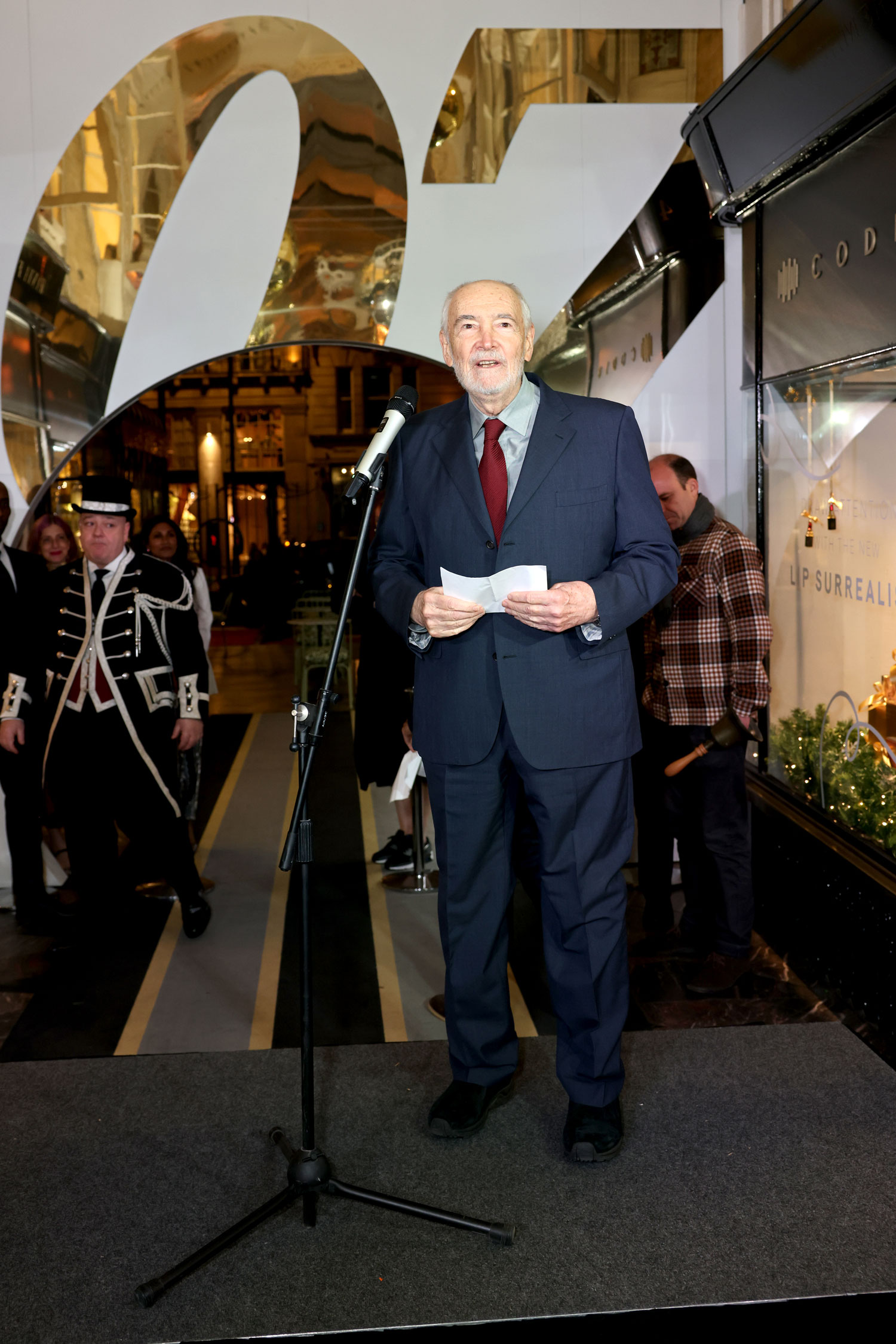 “I want to thank all of you for joining us here tonight. Next year October 5th 2022 will mark the 60th anniversary of the James Bond film. Harry and Cubby set out making a series, bought who would have thought 25 films and sixty years later we will still be going strong. In fact yesterday was announced that No Time To Die was the highest grossing film of 2021.” 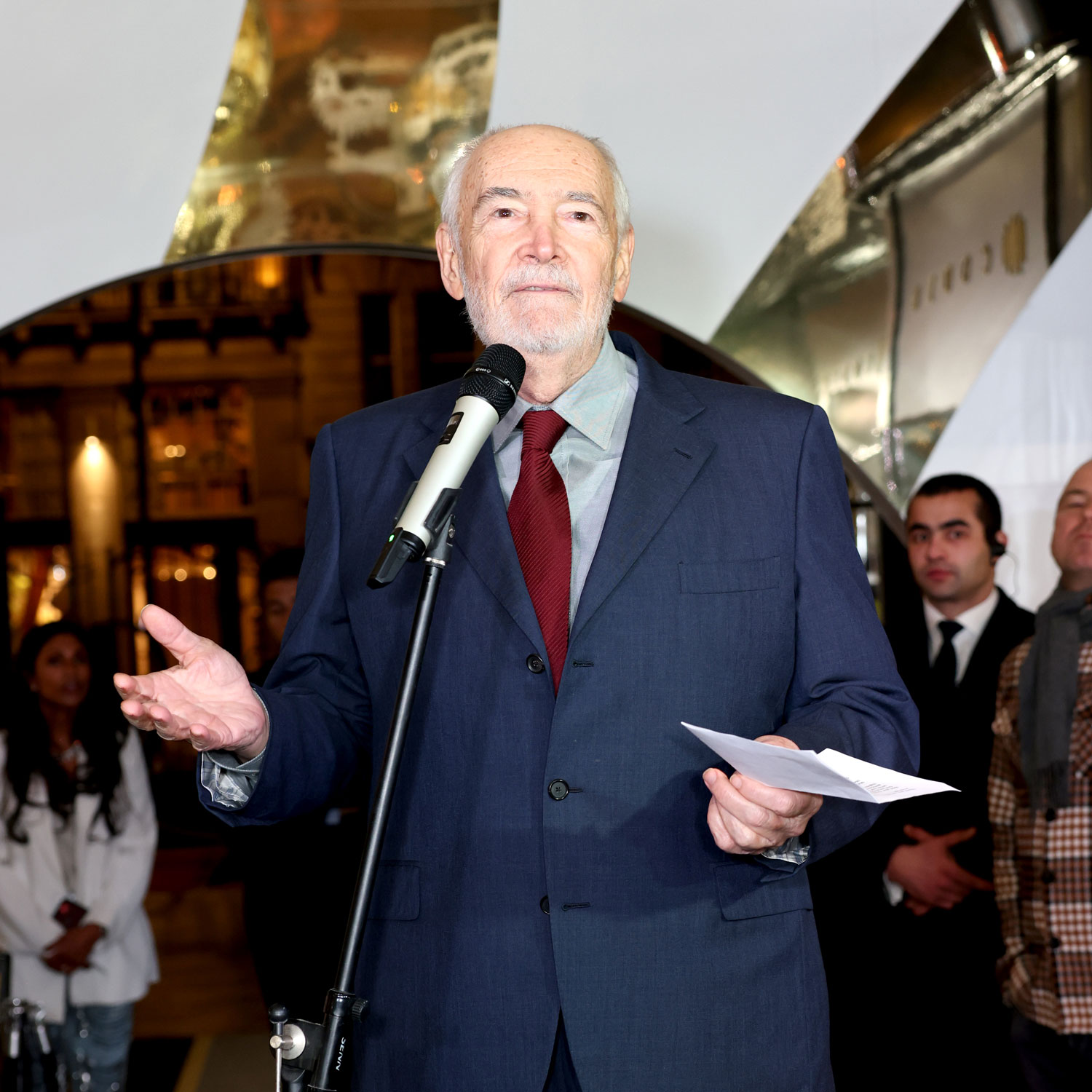 I questioned the group on whether Michael G. Wilson might be wearing the Turnbull & Asser Die Another Day tie. Z remarked,

[…] good shout, just looking at the pics from 007.com – it does have that red twill like pattern, that DAD tie whilst it has at least 4 colours in the weave the red is still very prominent. I also think it is a very good Christmas tie with the colours, but that’s my opinion.

I don’t know if this is intentional or not, but there is definitely a call back to Roger’s attire in The Man With The Golden Gun when he is in Beirut, similar palette of red tie, blue suit. 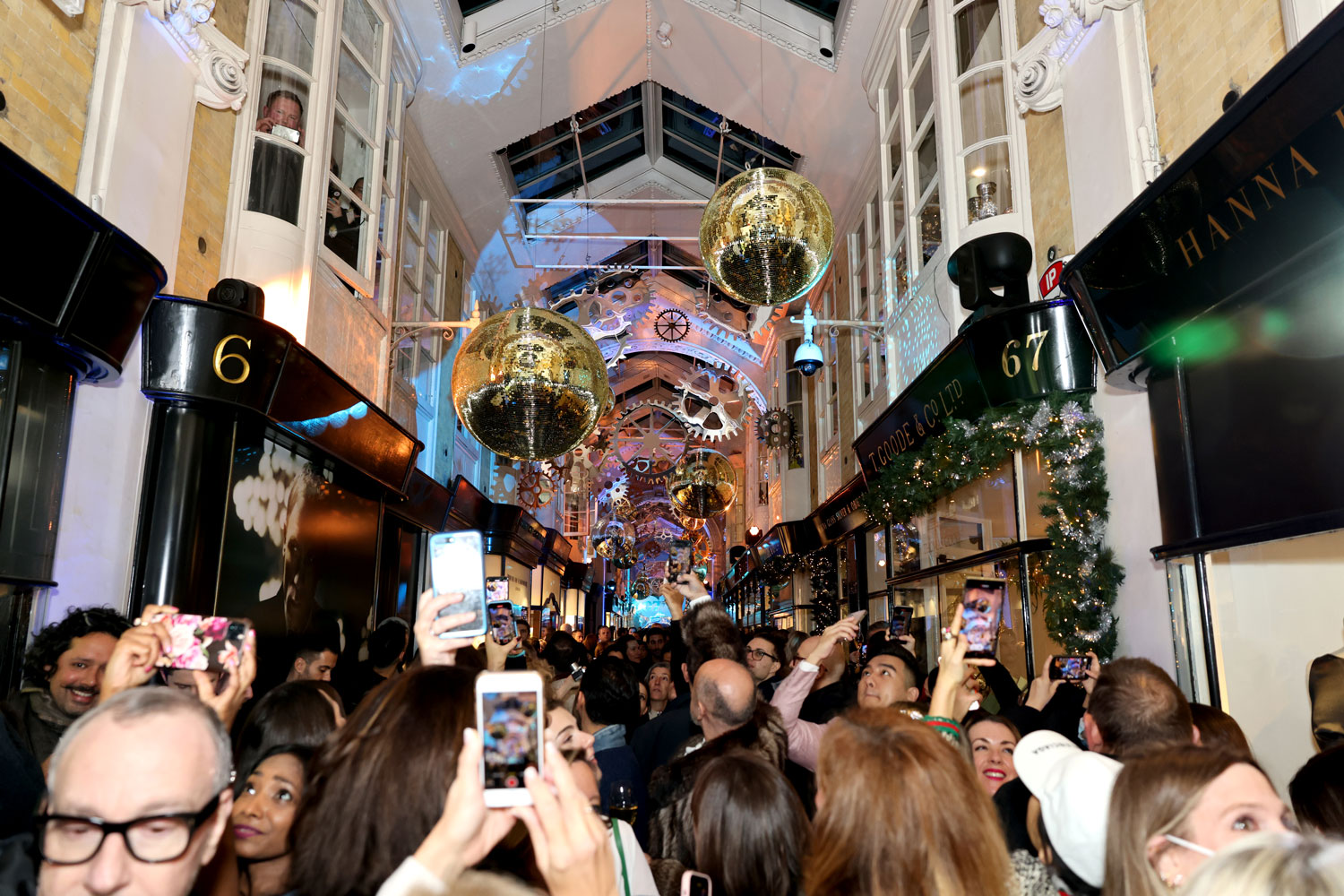 Micky G then quickly exited from the south entrance, which is fine. I’m sure someone of his age doesn’t want to mingle unnecessarily with COVID ramping up in the UK right now. Rory Kinnear then did something with a bell which initiated some lights being turned on. Admittedly I didn’t see any great prestige and wondered if someone had forgotten to throw some important switch.

Still, great to see everyone out, thanks to Bollinger for the water. The installations will be there ’till January. 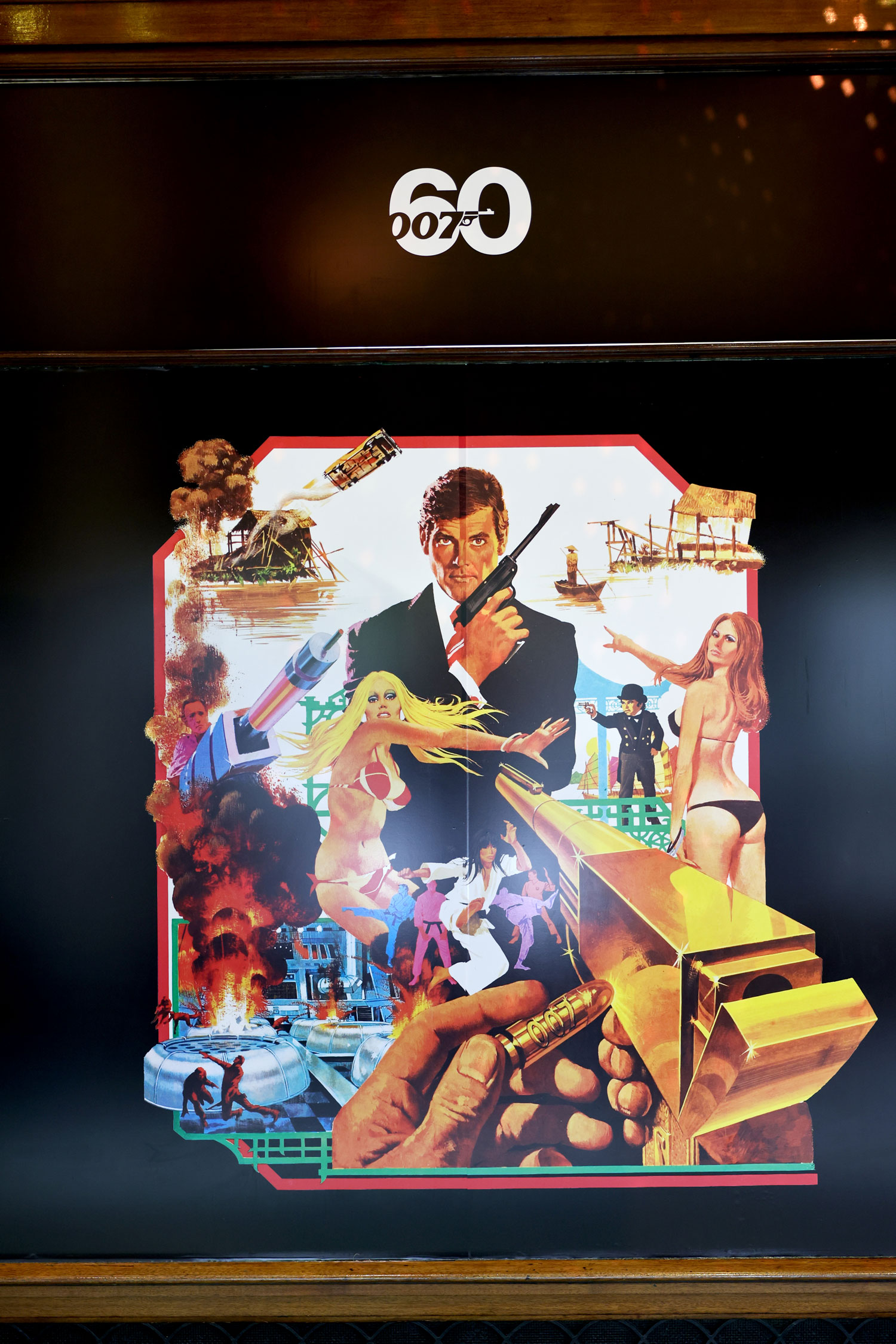 About the experience: (From the Press Release)

Burlington Arcade has been joined by two more Bond partners:

OMEGA, the luxury Swiss watch manufacturer, has launched a pop up ‘OMEGA Bond House’. The iconic brand has been present in the Arcade via their OMEGA vintage store since 2006 and this new additional space is completely dedicated to 007. 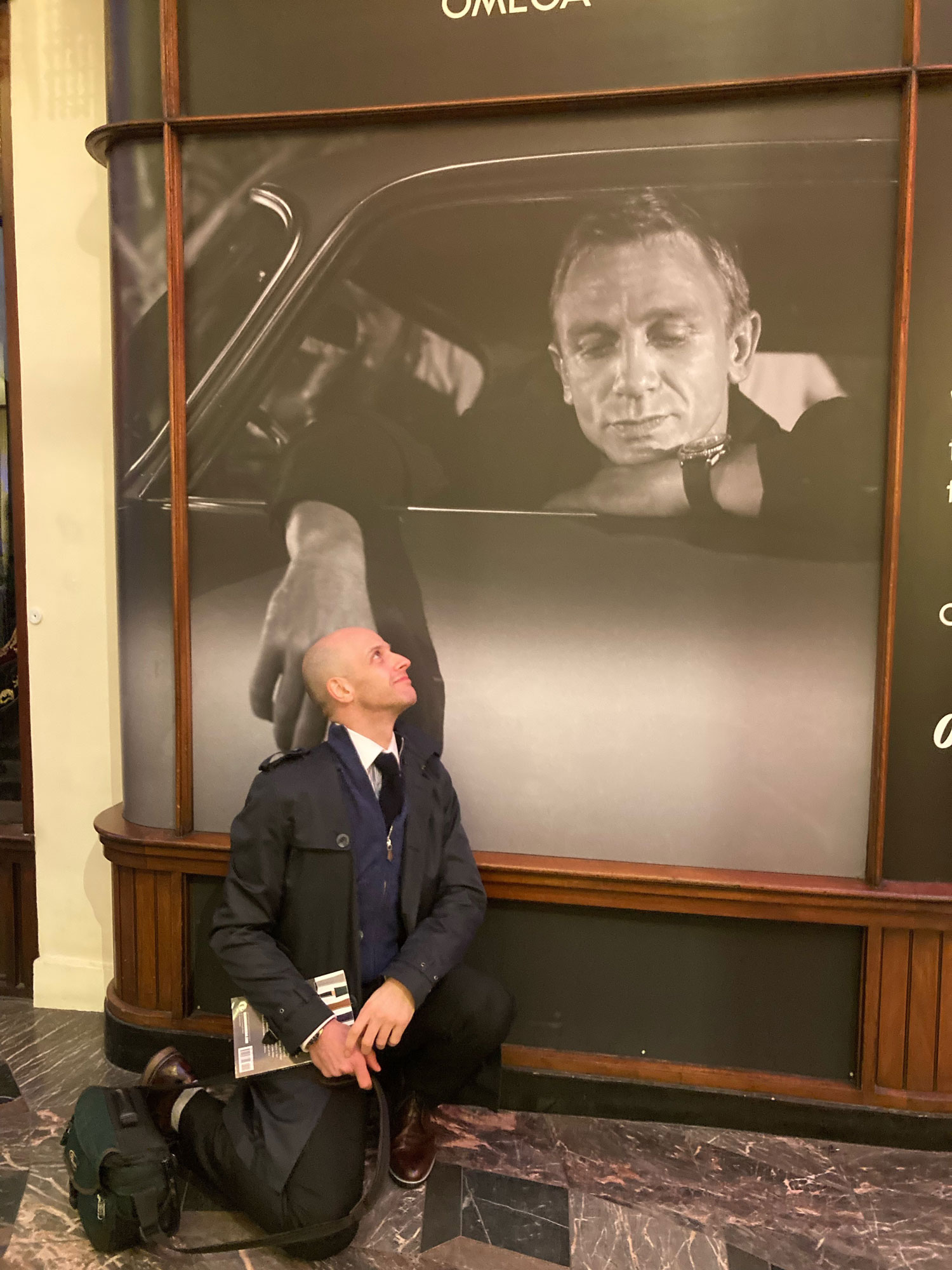 The ‘OMEGA Bond House’ boasts a ground floor dedicated retail boutique, a private members bar including an exclusive display of behind the scenes images by photographer Greg Williams and an exhibition of props and artefacts from the James Bond movies, including a selection of the OMEGA watches worn by 007 since GoldenEye in 1995. 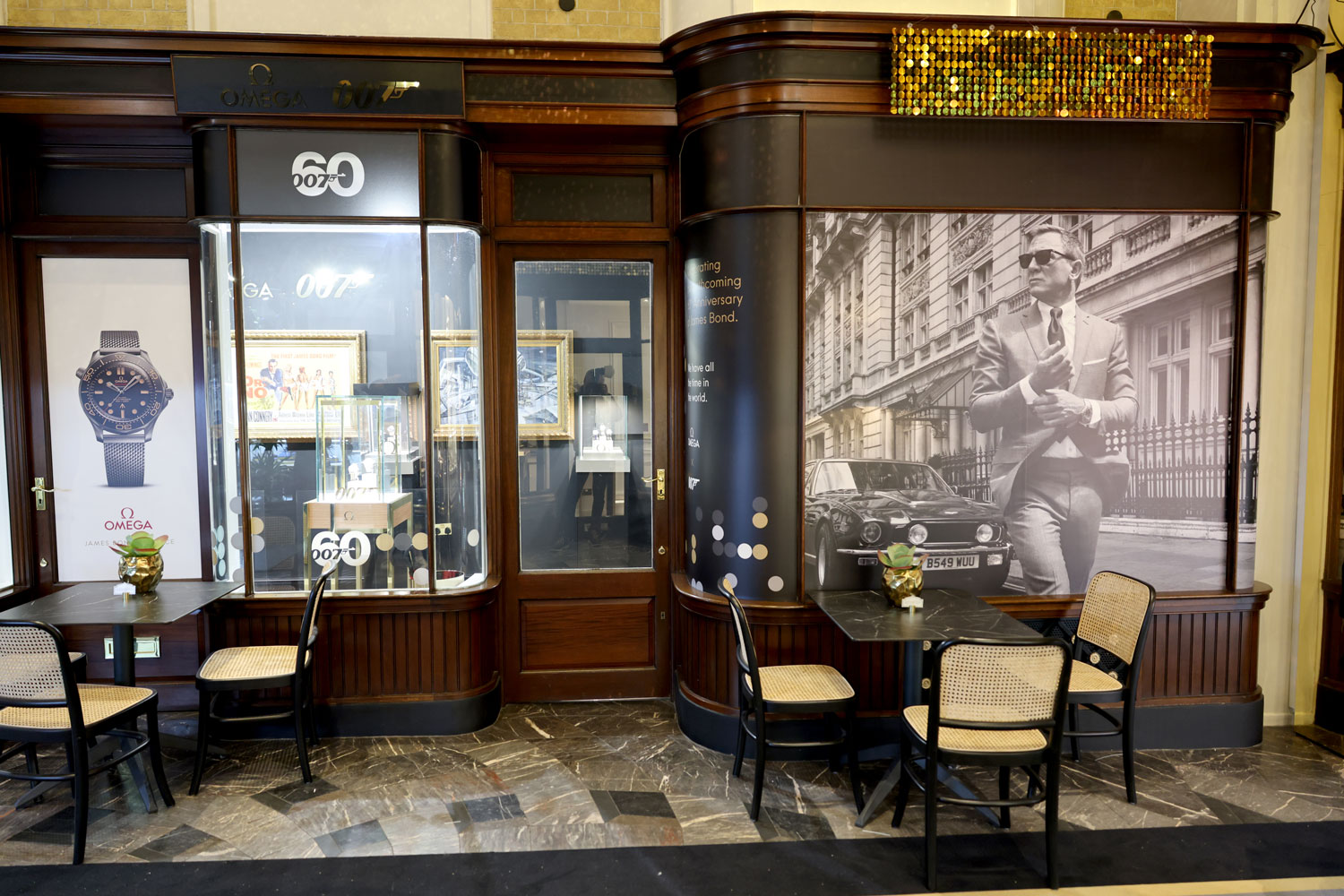 To celebrate the launch, a special OMEGA inspired carpet in the same design as the NATO strap that features on the ‘Bond watch’, will run the full-length of the arcade. Timepiece inspired mobiles hang throughout in a subtle nod to OMEGA’s Bond watch and the latest movie title – No Time To Die. 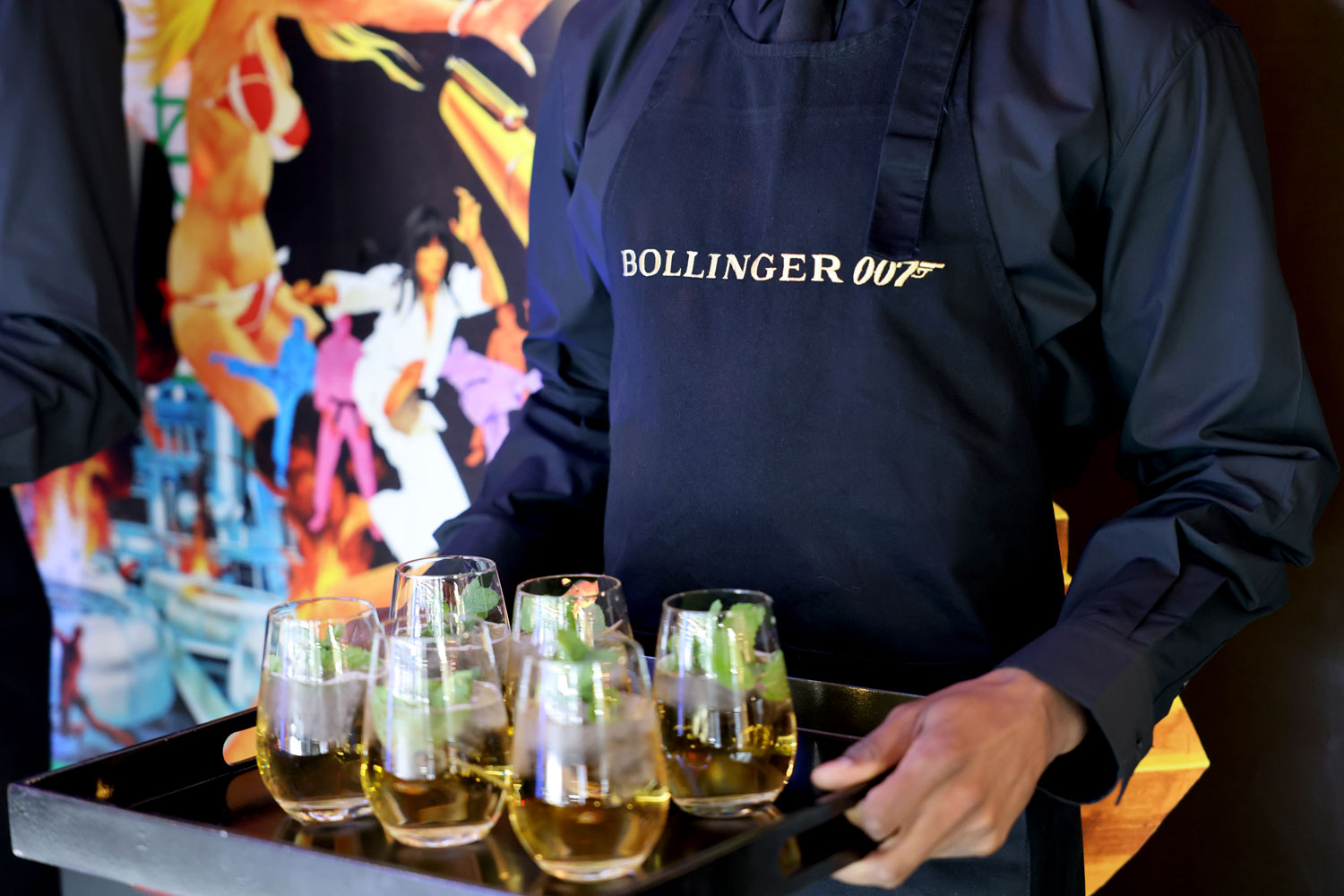 The other boutique launched is the world’s first Bollinger 007 Champagne bar and the only standalone branded bar in London. The new Bollinger 007 Bar offers the ultimate James Bond experience, welcoming Arcade shoppers and guests to enjoy the Bollinger experience and taste during or following a day of shopping at Burlington Arcade. The launch of the new and unique bar follows Champagne Bollinger’s 40th anniversary of its partnership with James Bond. 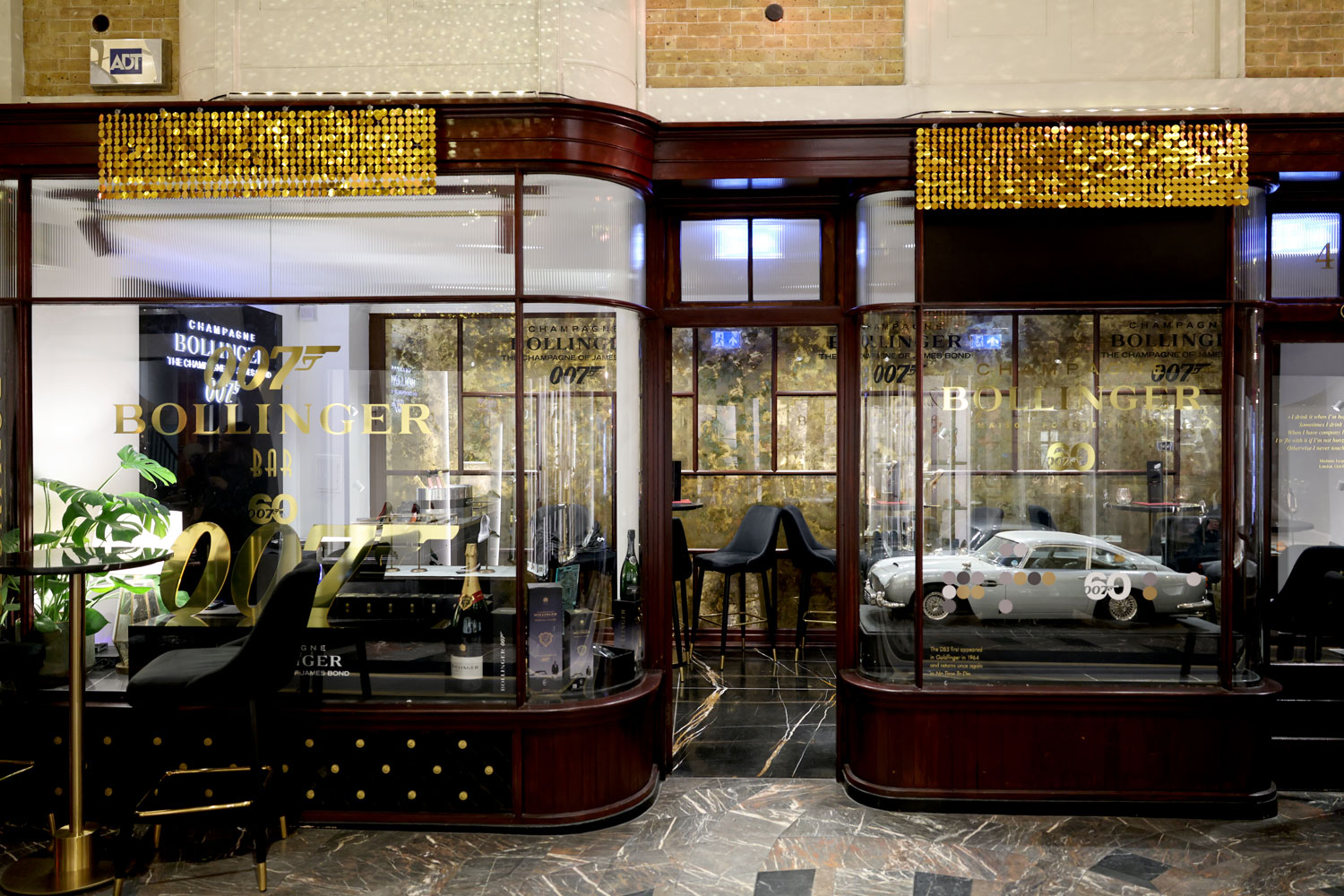 If it was non-alcoholic you were expecting me 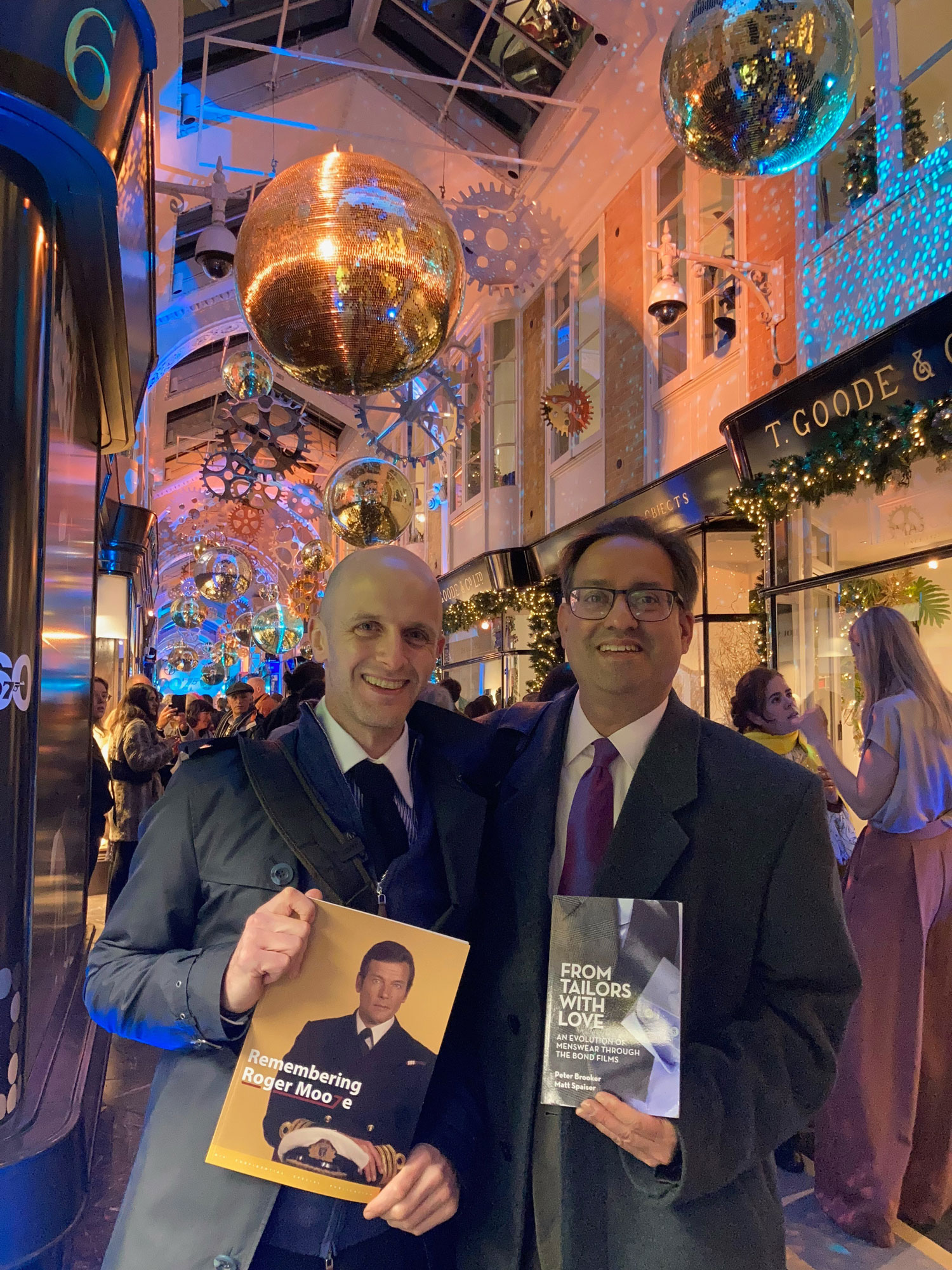 Myself and Ajay Chowdhury

Honouring the most perfect of partnerships, the limited edition gift box features the silhouette of James Bond alongside his Aston Martin DB5, celebrated photographer Greg Williams shot the new Special Cuvée 007 Limited Edition campaign, which features Greg’s signature cinematic style that appears in the No Time To Die campaign.

Thanks to Z for taking pictures of me and helping me document the event, for Bollinger for the water and The Bond Experience for the invitation. Further images of Bond at Burlington Arcade for the promotion of No Time To Die can be found here.