You get the sense with Benoit that he is wearing things to the end of their days, but he has more affection for his clothes. 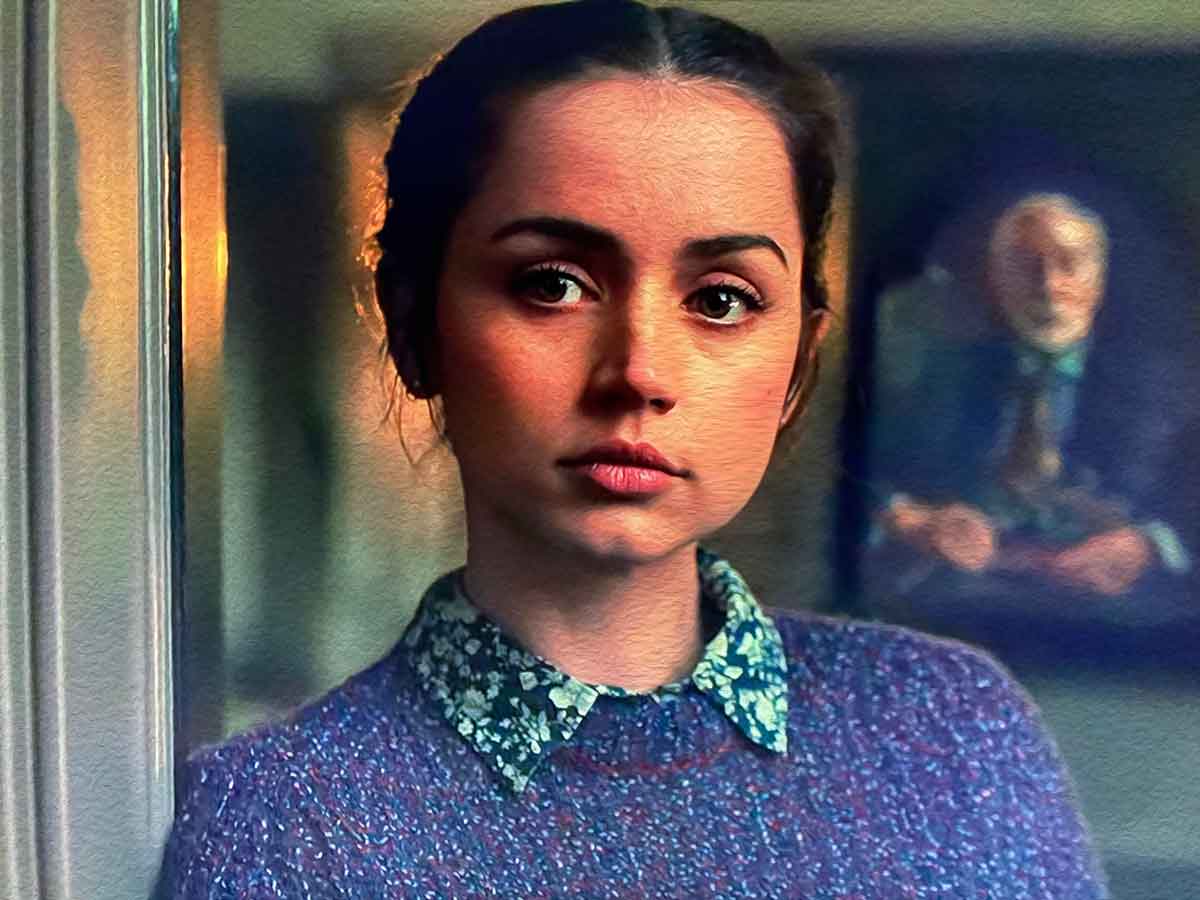 In this episode of From Tailors With Love we discuss the style takeaway’s from Knives Out, the 2019 film directed by Rian Johnson with the costumes designed by Jenny Eagan. In these show-notes I’ll be able to give you some insights into the brands that were worn throughout the film with some links to the products featured. 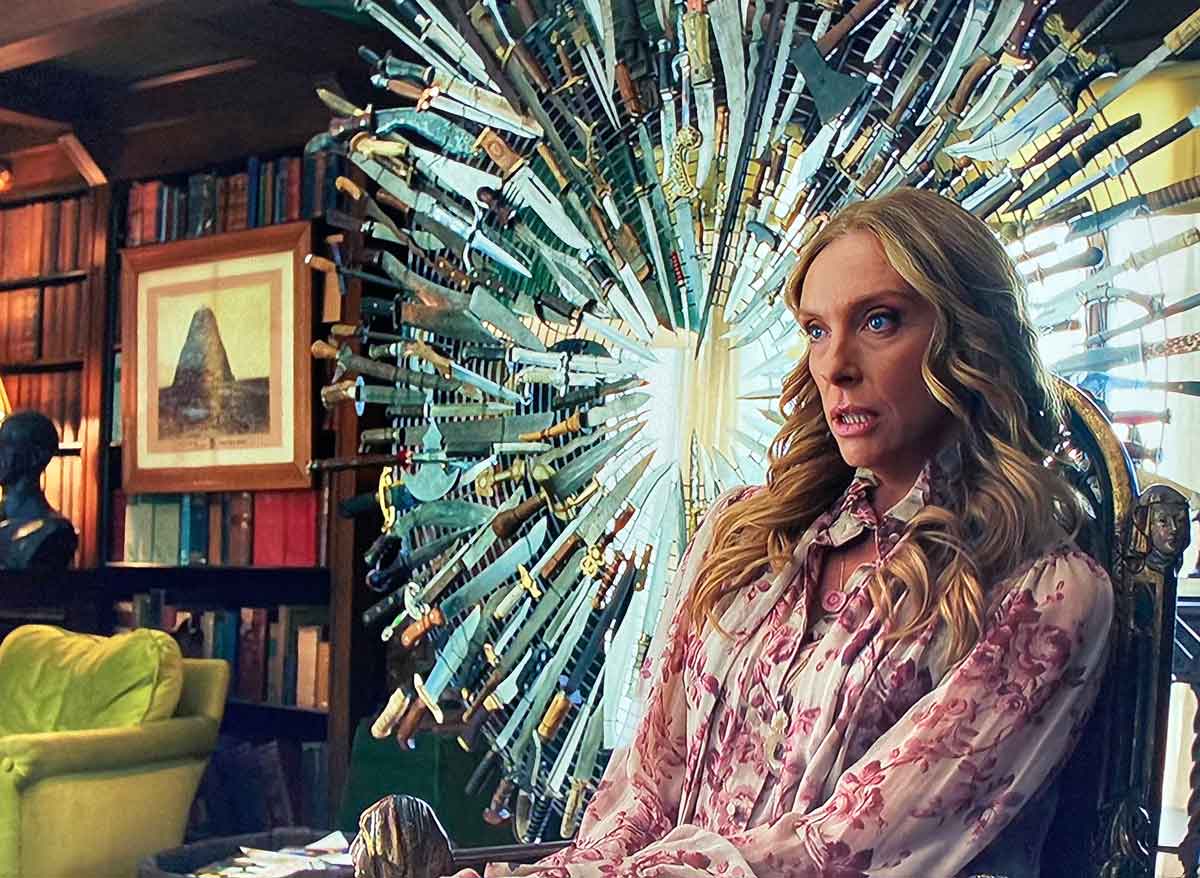 About the costumes Nathan says:

I knew I wanted this one (the argyle sweater) from Walt. When you think about the marketing aspect obviously the clothes are a little bit too muted so yeah, in post; hue in saturation up to 100.

The clothes look nothing alike. Nothing in the movie was custom made, it was all purchased. The items comes with the production tags, all Nordstrom, APC, Saks Fifth Avenue, Net a Porter etc. […] It’s a family with a lot of wealth so [what Jenny Eagen thought was] I’ll just get them from all the main stream boutiques that sell expensive clothes. 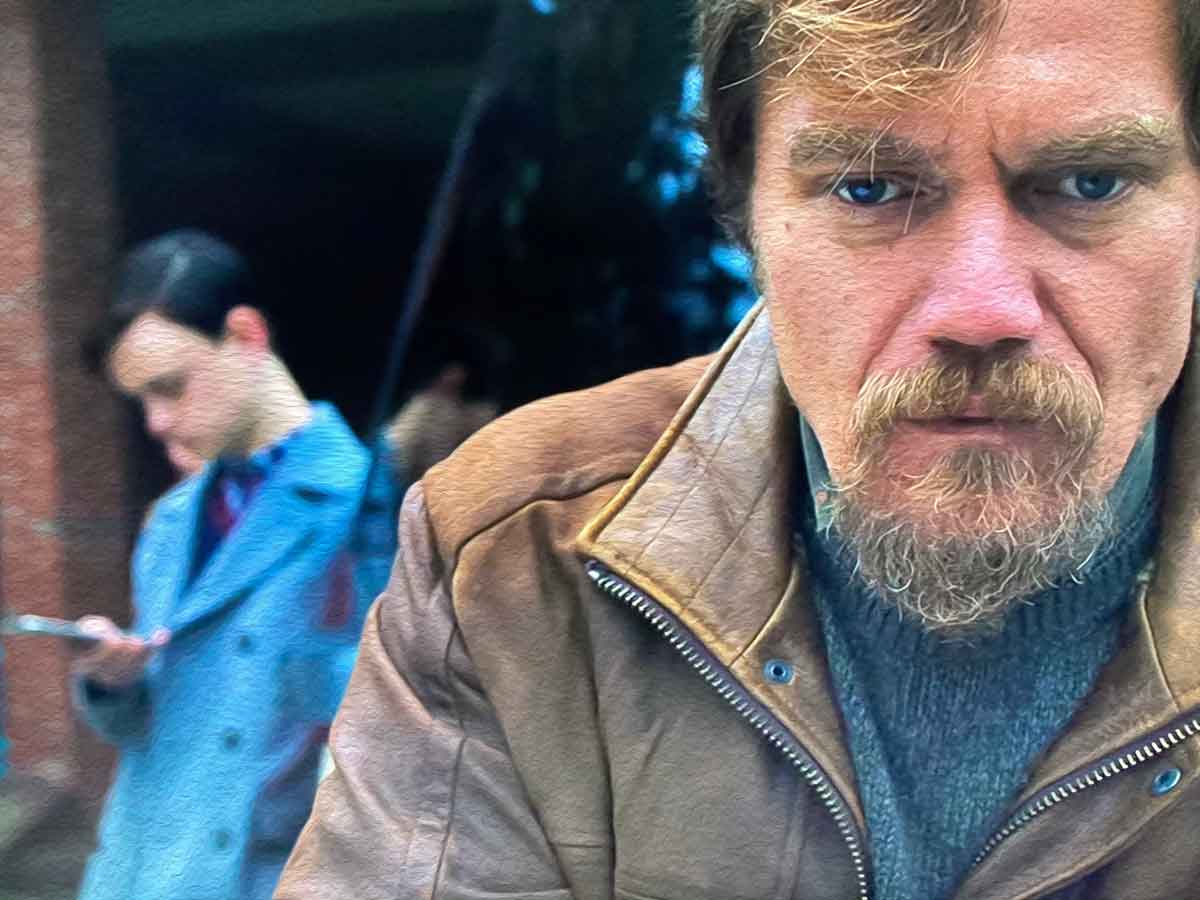 They’re just off the rack.

One of the biggest sartorial moments in the movie was the Kooples Knit sweater that Chris Evans wore. Ransom, played by Chris Evans is reckless in all facets of his life and this is exemplified through his style. 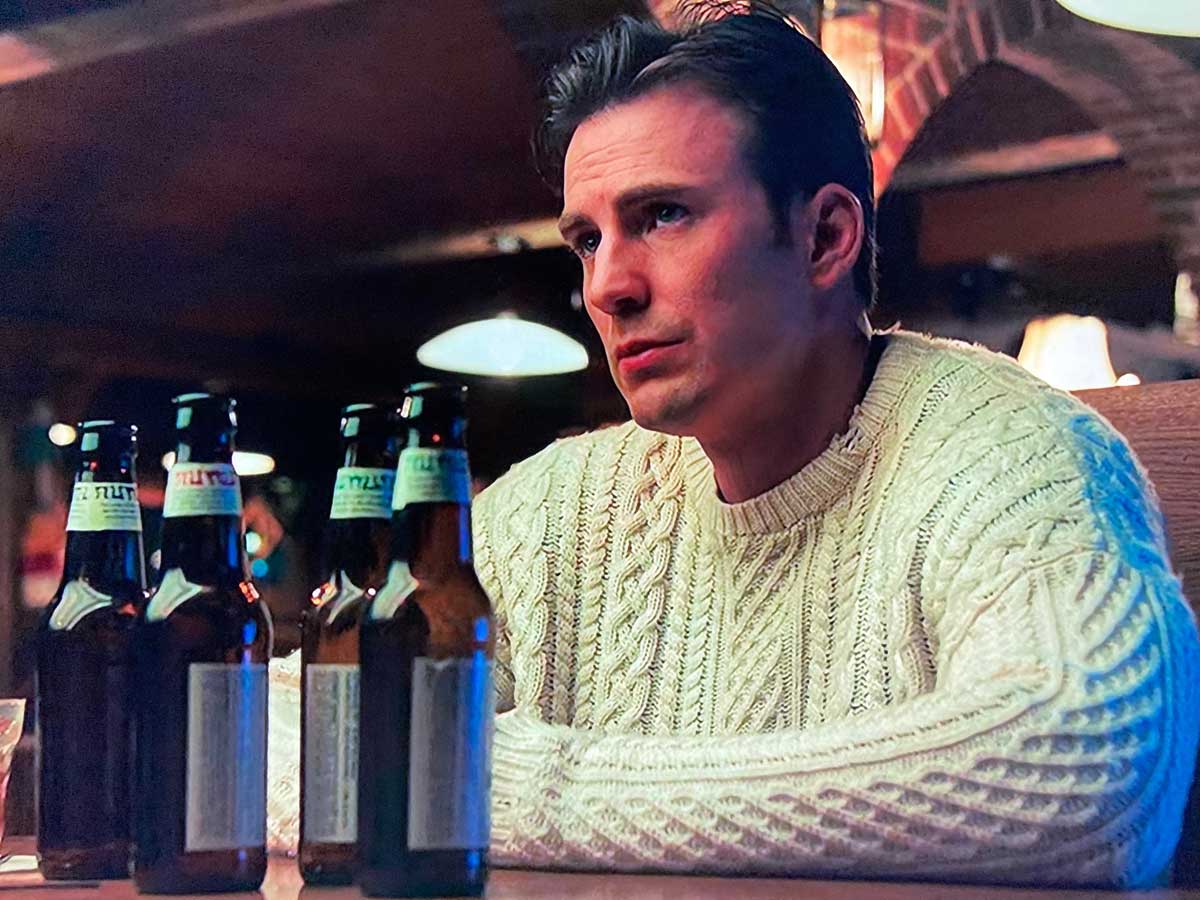 Jovan had this to say about the famous sweater..

I think Jenny Eagen said in an interview that she did that on purpose to show that he would buy these nice things, these nice sweaters and top coats but not really take care of them too well. He’s very disposable in his style. He just throws out thousand of dollars that’s not really his, and when it falls apart I’ll just buy a knew one. But you get the sense with Benoit that he is wearing things to the end of their days, but he has more affection for his clothes. 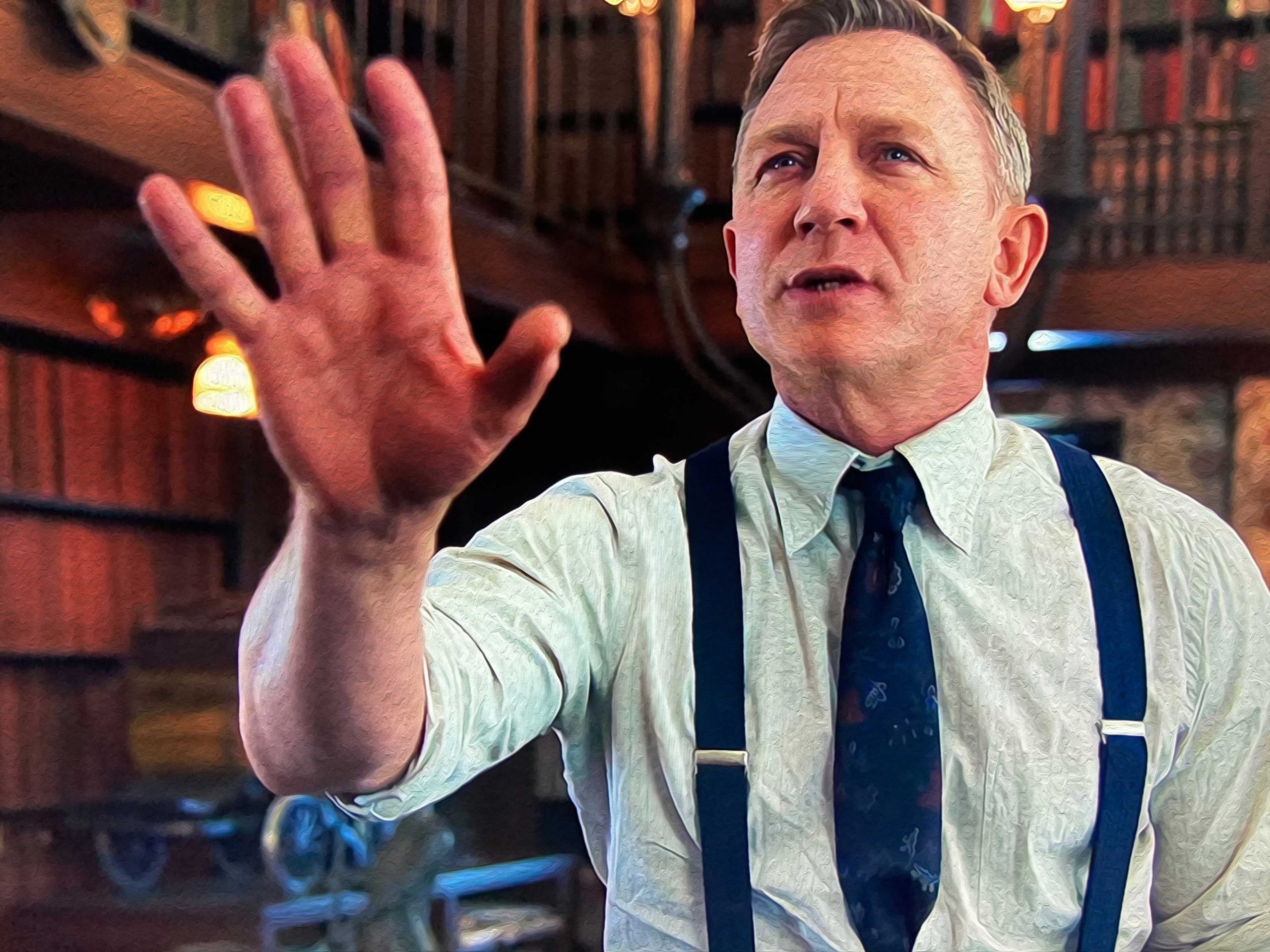 Matt Spaiser on the look of Benoit Blanc..

He’s dressed in an American way, even though his accent doesn’t sound authentically southern. I thought it did make the character seem realistic, he’s not wearing anything too fancy, he’s dressed well.

The clothes reminded me of Ian fleming’s James bond. He’s not dressed like his (Craig) James Bond is dressed, but the way that he seems to care about the clothes. Benoit Blanc is not wearing tailored clothes because he has to. He’s dressed in a way that is comfortable, they’re not very flashy. I’m seeing this as an American version of what Fleming’s Bond might have dressed like. 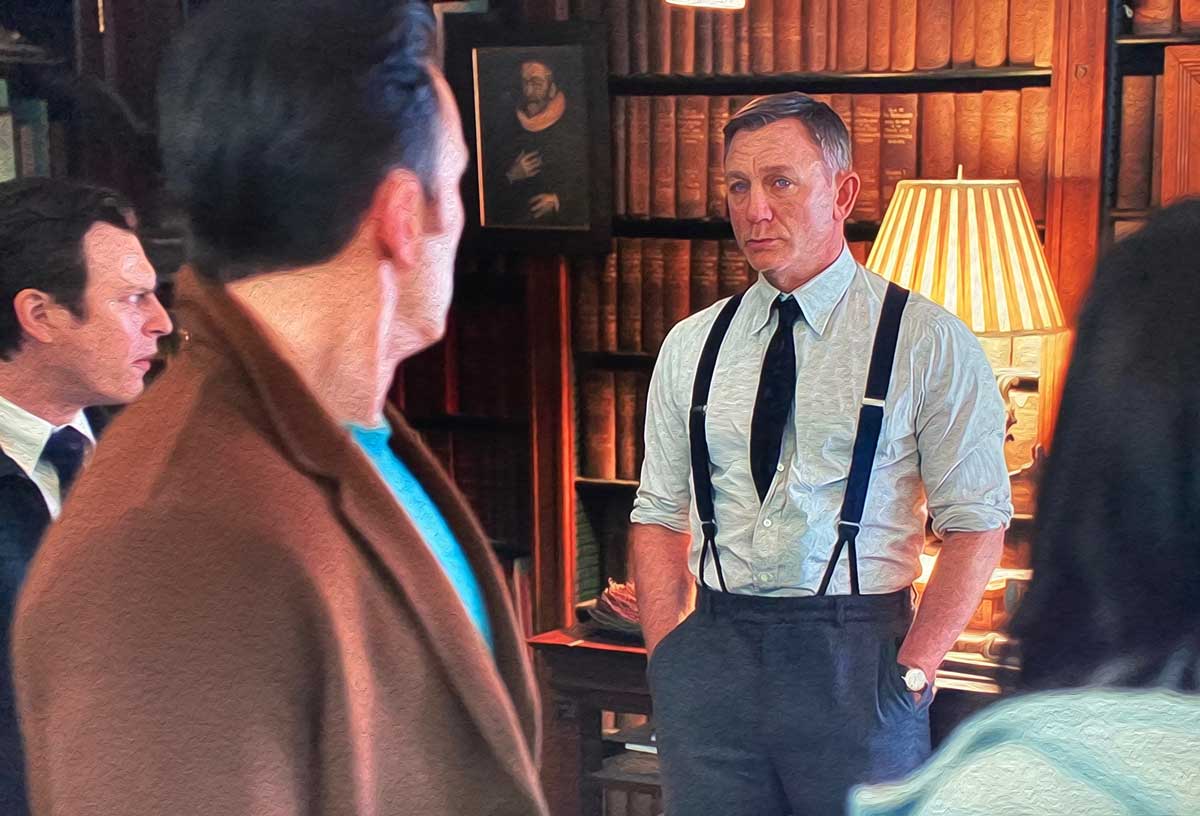 A solid contribution about the ties Daniel Craig wore comes from my new found obsession on Instagram, Tie Another Day. He remarks.

He (Benoit Blanc) is kind of channeling his inner Columbo, dressing not as sharp, sort of wrong footing the suspects. The way he wears his tie is also to disarm, he is not power dressing and as such doesn’t come as a direct threat. However, all the while he is systematically piecing things together and is able to find the correct suspect. 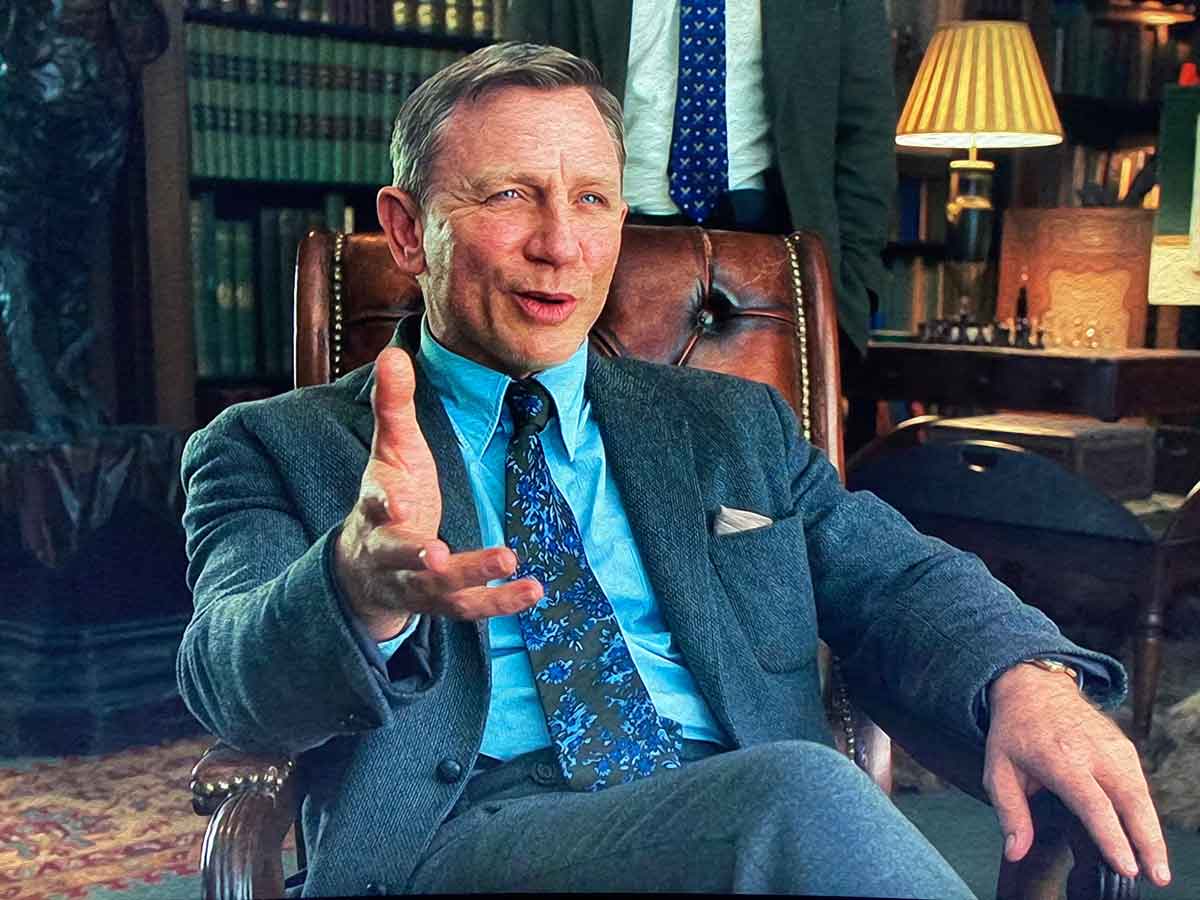 Get the Knives Out Look

The oversized distressed cable sweater is by Kooples and is currently out of stock. This was originally priced at 325 GBP, alternatives can be found on Blarney’s site and more recently I’ve found a beautiful Aran Cashmere sweater by an Irish brand called Inis Meain. 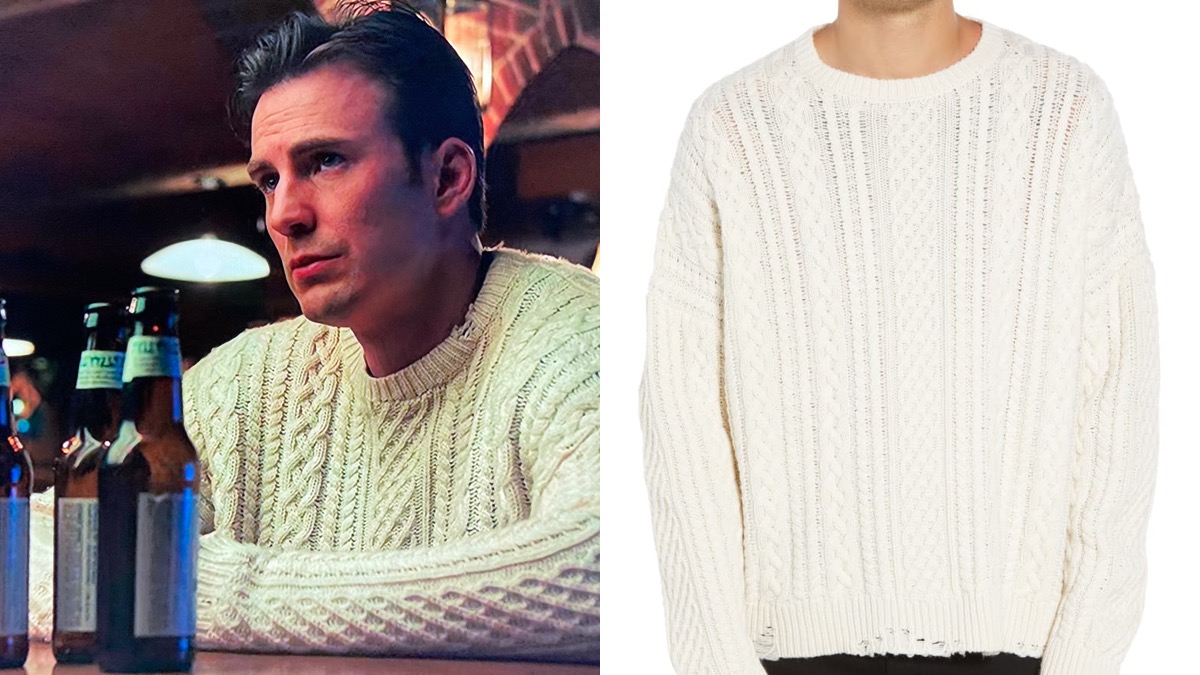 Unfortunately the Eleventy Argyle Sweater worn by Michael Shannon as Walt, is also out of stock. (At the time of writing). If anyone has any decent alternatives then please get in touch. 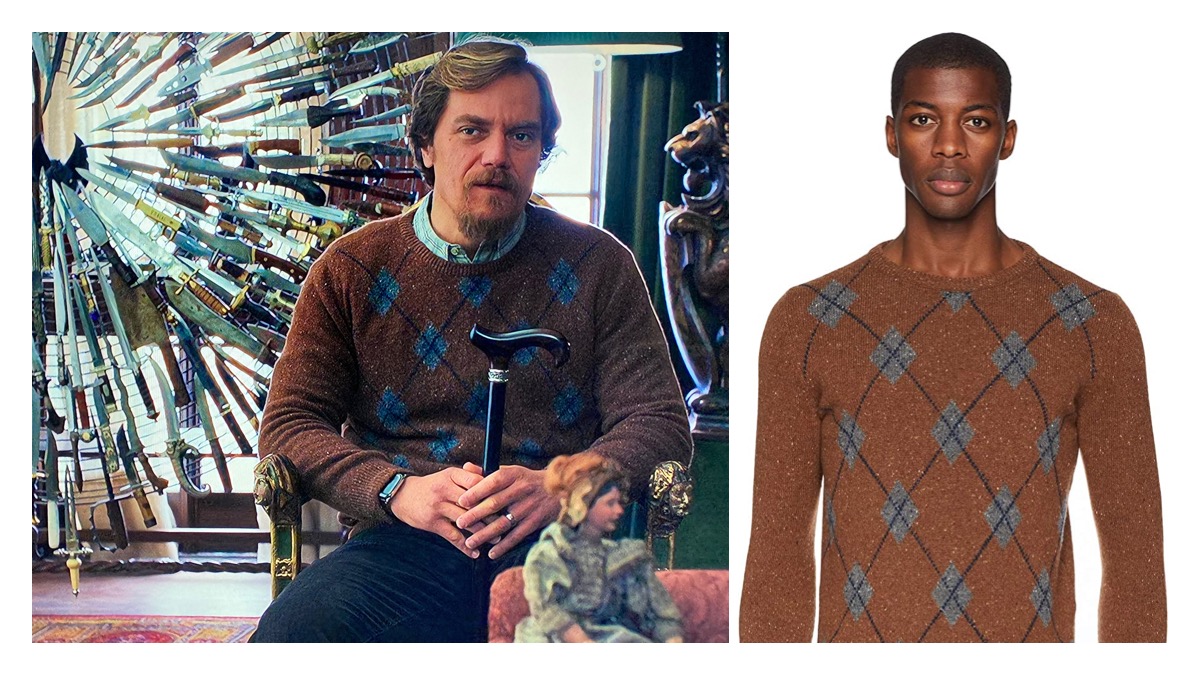 Thanks to Whats Daniel Wearing on Instagram for giving us all the heads up on this one. A Brooks Brothers Herringbone Top Coat piece currently still on sale. He also wears some honey-turtle optical glasses from Cutler and Gross.

Update from my correspondence with Brooks Brothers Aug (2020)

“Unfortunately we do not know if it was Brooks that supplied the ties and suiting. The logistics of those dealings are handled by a team in our main office in NY. They do usually let us know of any affiliations we have with films, like when they did The Great Gatsby clothing, but there was no mention I can remember about the Knives Out suiting or ties being done by us specifically.” 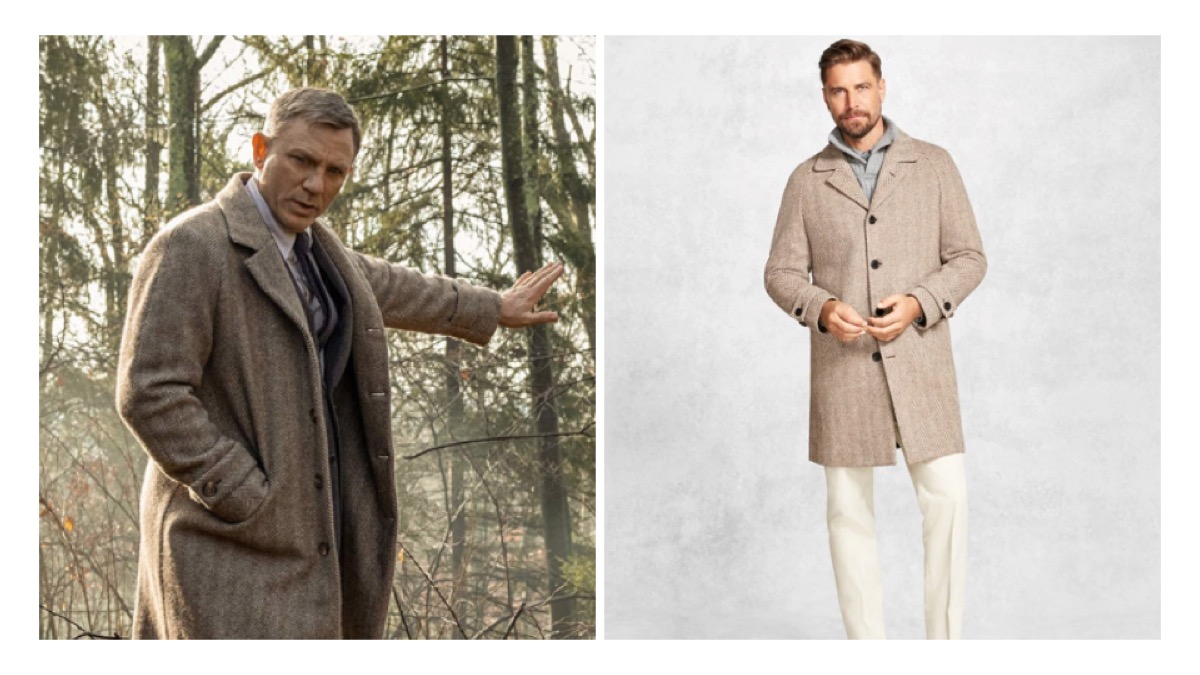 You can download the podcast on iTunes, Stitcher or Spotify. Or listen in the player below. You can also catch our chat on our YouTube channel now.

A big thanks to Bobby Morelli who did some great thumbnails and he’ll be coming back on the show in a couple of weeks. 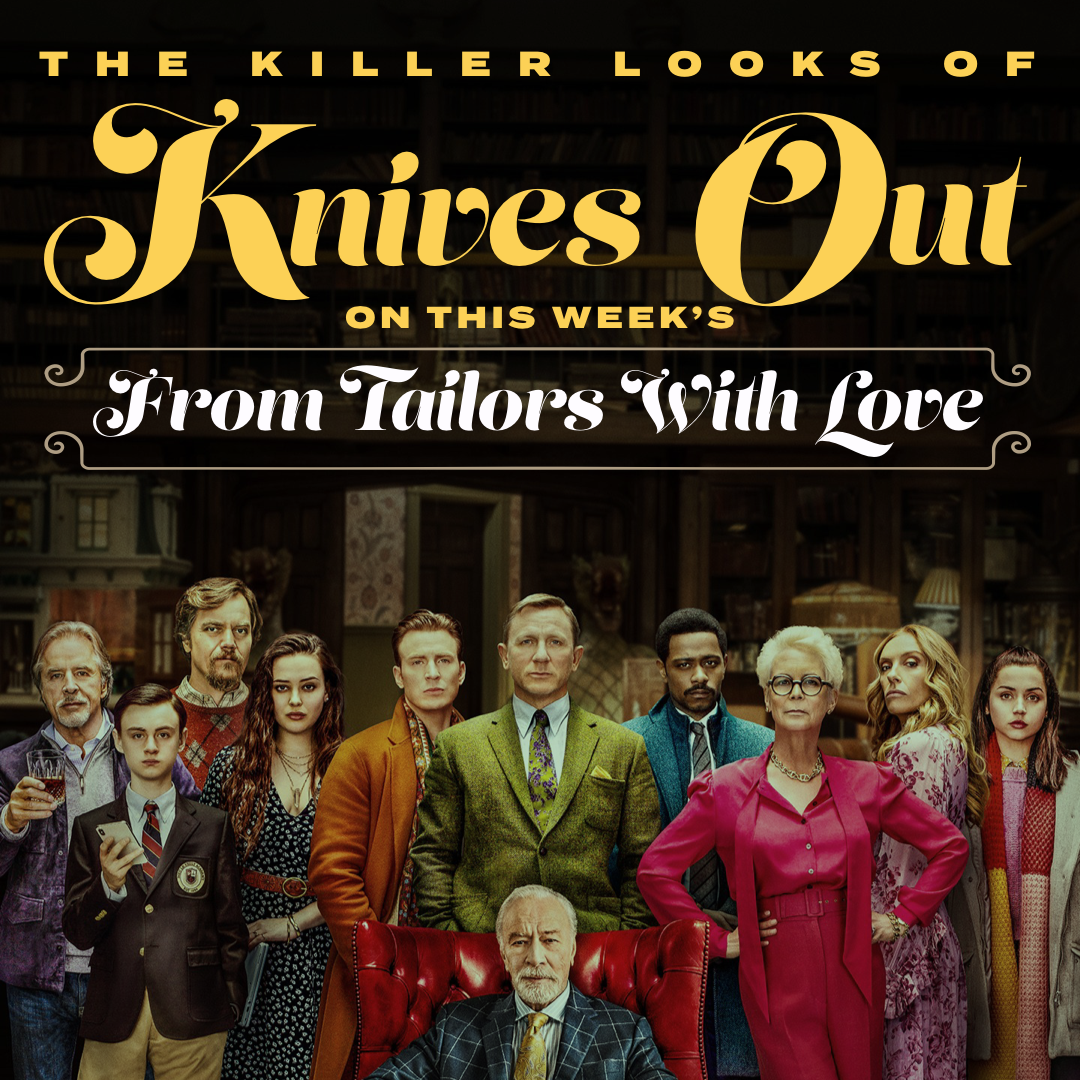 Knives Out is available to buy on Blu Ray and on HD through Amazon. As they were so kind to reply to my email, next on my reading list will be Brooks Brothers: Two Hundred Years of American Style by Kate Betts.