Inception – Even your Subconscious should be well-dressed | #75

In this episode of From Tailors With Love we look at arguably one of the most stylish films of the last decade INCEPTION (2010) directed by Christopher Nolan, with a wardrobe provided by Jeffrey Kurland.

Costume Designer Jeffrey Kurland seems to be the go-to guy for Christopher Nolan now having previously done the wardrobe for Inception, Dunkirk and Tenet.

I’m joined by Christopher Laverty author of Fashion in Film, and the blog Clothes on Film. About the costume designer Jeffrey Kurland Chris says:

He’s wonderful, he’s into the story and the character, although its a stylish movie it doesn’t sound like it was at the forefront of his mind when he was doing the film. He clearly loves doing male-dressed suiting. I think he has a really good eye. His clothes don’t date that much. 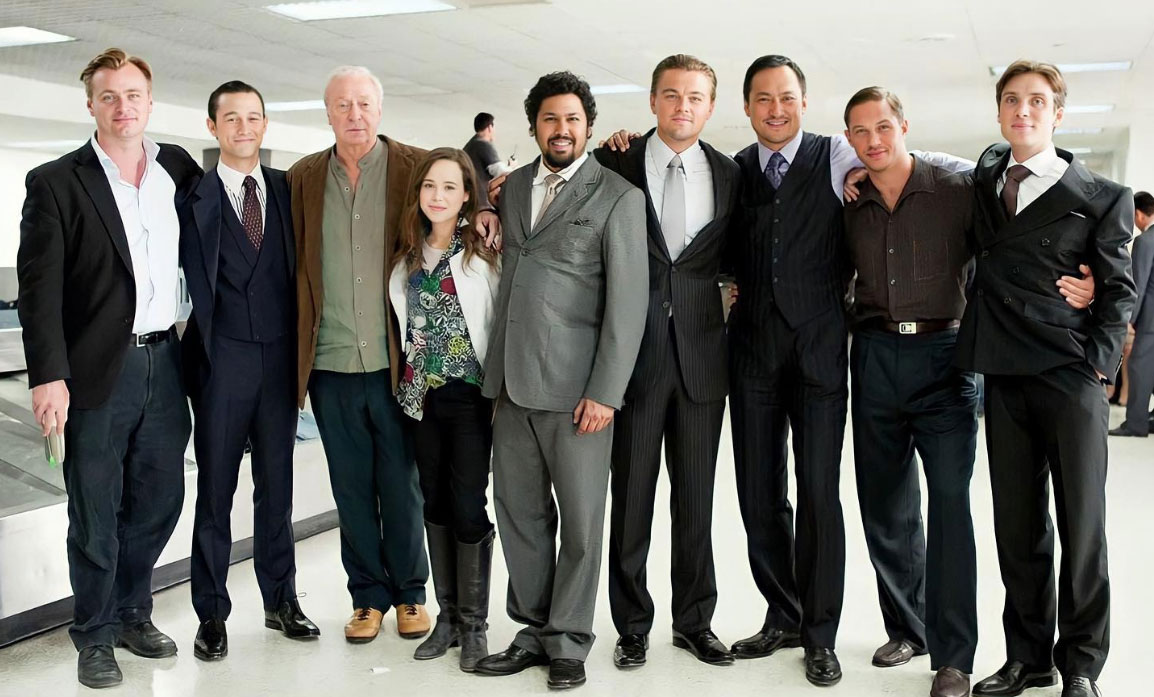 When I spoke to Jeffrey recently he was so gushing about Ken Watanabe [Saito]. They have different looks, Cillian Murphy is largely in the double breasted suits, Joseph Gordon Levitt (JGL) is mainly in the 3-piece suits and when I mentioned Ken he [Kurland] said I could put him in anything. We didn’t need to be too specific because he could just wear anything.

Also joining me is Matt Spaiser from Bond Suits. Matt paid particular attention to the collars in Inception. About the shirting Matt had this to say:

Leo Di Caprio’s collars are a little narrow; a little too narrow for those windsor knots where as Cillian Murphy has the wider collars and the wider tie knot. Those collars are very timeless, very balanced not of any era. I liked them.

Not everyone was wearing the same kind of shirt collar. It gives them their own identity. It was an era of menswear that had a lot of different classic variations. Not everyone wore the same thing, but clothes never went to any extremes.

This film shows that era of menswear that looked to the past but never tried anything new. [They] didn’t try and make a statement. But thats why we’re talking about these clothes now.

And lastly Bobby Morelli from Matched Perfectly on Instagram says about his favourite outfits and the style of Leo and JGL.

You get a look at him [Leo..] in suiting, in casual clothing, in a very wide variety of settings. That corduroy jacket is super cool. You see him in a bunch of different settings and a bunch of different looks so you get a more complete picture of who his character is.

I am a big fan of Joseph Gordon Levitt’s entire wardrobe in this. He pulls of the 3-piece and the waist piece, its stellar its really great. I love the leather jackets both Joseph Gordon Levitt and Leo are wearing in the first dream sequence. My favourite piece is Levitt’s oxblood 70s-meets-40s retro look.

They’re all custom made for the film so it’s a tough ask to track those jackets down. I love how rich the colours are. Him (JGL) and Leo are both wearing leather jackets but they both have their own personalities and unique qualities.

In an interview to Esquire Magazine the costume designer Jeffrey Kurland talks about the complexities of filming that scene,

You can download the podcast on iTunes, Stitcher or Spotify. Or listen in the player below. Be awesome if you could leave a review it will encourage us to keep creating podcasts like these. You can also catch our chat on YouTube.

I did mention that the napkin used in the hotel scene where Cobb tells Fischer that he’s dreaming, is available through the Prop Store for £569 / $745. The thread where I mention the 500 USD wallet can be found on this forum.

Credits & Extra Reading on the style of Inception

Christopher Laverty has done some great work interviewing Jeffrey Kurland (sadly no longer available). I can also recommend his book Fashion in Film, available to buy now on Amazon. Huge thanks to Matt Spaiser from Bond Suits and Bobby Morelli from Matched Perfectly for joining me on the podcast. You can find a little more info on the suits from Inception in this Style Forum Thread. The 4K Blue Ray imagery sourced for this post were pulled from the Blu-Ray Comparisons YouTube Channel. Used here under the fair use doctrine.