Carole Ashby – John Glen called ‘have you got big t*ts and can you whistle?’

This weekend I had the pleasure of meeting Carole Ashby, better known to James Bond fans as the whistling butterfly girl from A View to a Kill.

We also got to see the premiere of her documentary the Ashby’s Odyssey which takes you on a reflective spiritual journey of her childhood as a single child.

In the Q&A we got insight into how Carole Ashby got involved in the James Bond franchise and her memories of working with Roger Moore and the Broccoli family. 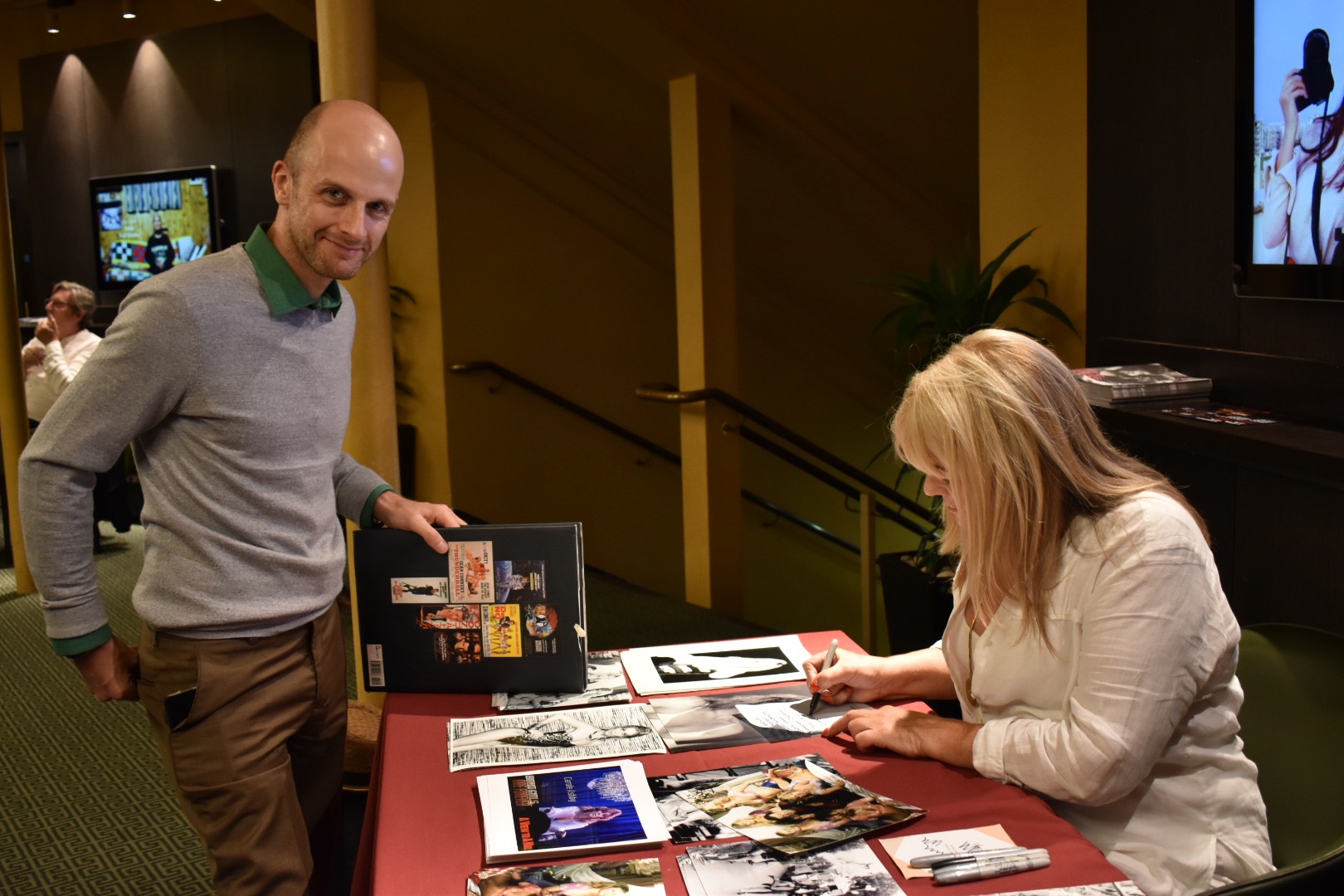 Make it out to Brooker. Peter Brooker. Actually don’t, I’ll be a laughing stock.

“Roger is my favourite he was my Bond I knew him very well. I’ve met all the other Bonds and they’re all charismatic. I loved him (Roger) he was a gentleman he was very funny. He was happy doing the job he was doing.

He was a very kind man, through his help I got a H1 visa to stay in America. Michael Caine at his memorial said he was his best friend and had he not been so damn good looking he would have been a comedian. 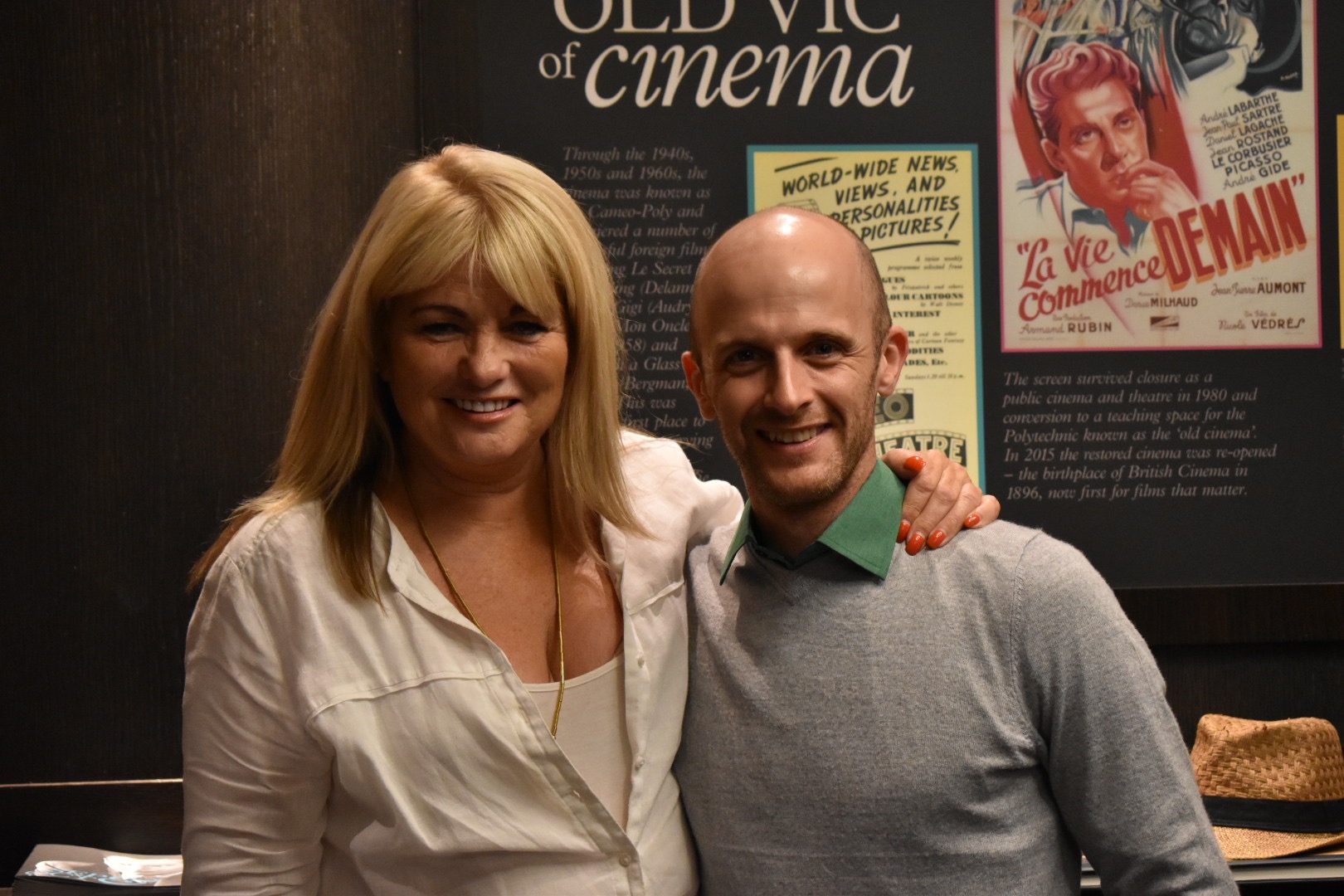 What are your recollections of Cubby Broccoli?

He was wonderful, very kind generous man. He worked his way up and achieved great things. But he had that touch with people. He changed my life as did the rest of the (Broccoli) family.

I shall always be grateful. Cubby was very loved in a business where it was hard to get to the top without stepping on peoples necks. He got to the top and was still loved. I think that says a lot. 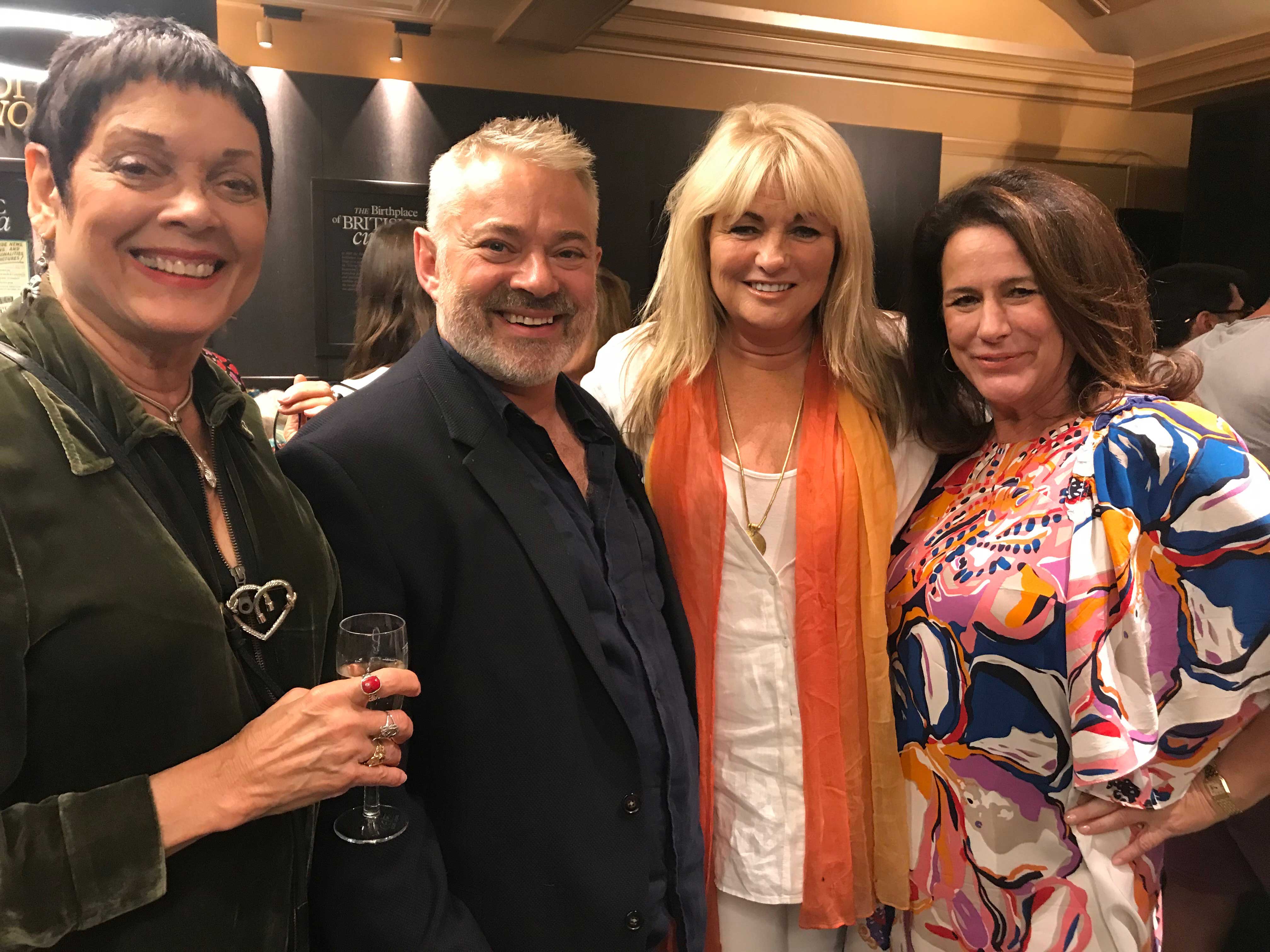 From left to right. Martine Beswicke (Thunderball) Graham Roos (Director of Ashby’s Odyssey) Carole Ashby and Caroline Hallett (A View to a Kill)

Carole Ashby, how did you get involved with the James Bond movies?

I was doing a show called Sale of the Century, (huge applause from the audience) every Saturday night for 3 years. 22 million people watched it. They were casting for the next movie and asked me to audition so I did.

I went out and bought the most expensive outfit and boots I could afford. It was made from red suede and had fringes on them. I thought if they don’t remember me they’ll remember that outfit.

At the end of the audition I said, ‘I’ll see you on the set then will I?’ I was a cheeky sod.

And then I left. 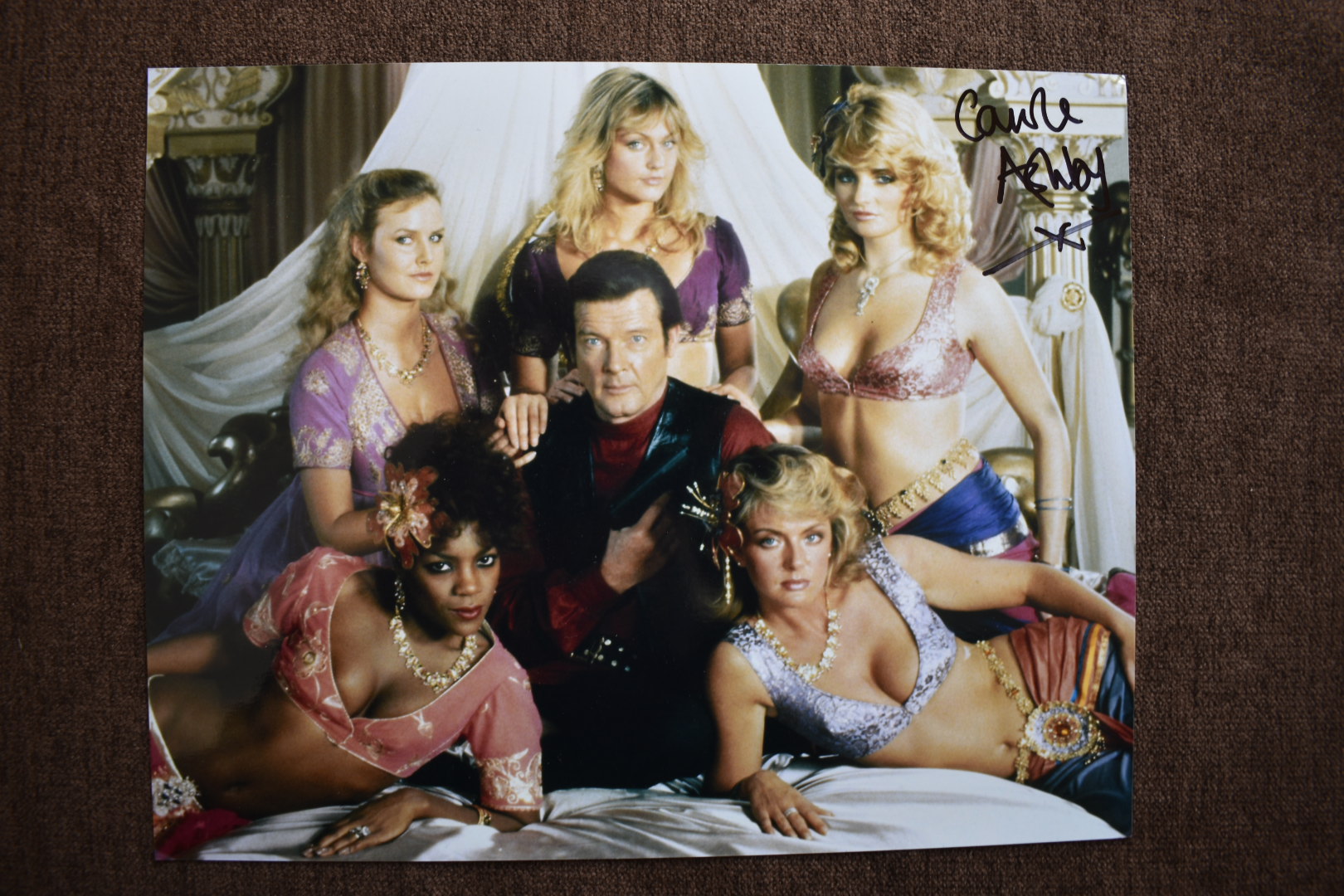 I went home. On the answer phone I had a message from my agent ‘they want you to go back and wear the same outfit’. I said thank god, I can’t afford another outfit.

I finished Octopussy, done the world tour, got back to Parsons Green, doing the laundry thinking where do I go from here? Then John Glen called, he said..

‘Carole we’re casting for the next film have you got big tits and can you whistle?’

I said ‘well they’re medium, I can whistle badly, inwards’.

John said ‘we’ll stuff you and dub you‘.

Check out the video below for the scene featuring Carole Ashby. The full audio from the interview will be played on episode 35 of the podcast. Check out that and all other episodes in the podcast index.

I used to think that Bond would need to bed them to earn their stripes as a Bond girl. But then, Camille in Quantum of Solace goes unsullied by Bond, and surely we consider her a Bond girl no?

I then considered a Bond girl someone that has affected the trajectory of Bond in some way. But then that would make Judi Dench a Bond girl. I’m sorry but M is not a Bond girl. So where is the line drawn?

I asked this question on the Bond Fans Only Facebook Forum and here is what they had to say. Apologies for this rather lame infographic. As Ourumov would say, we’ll double our efforts. 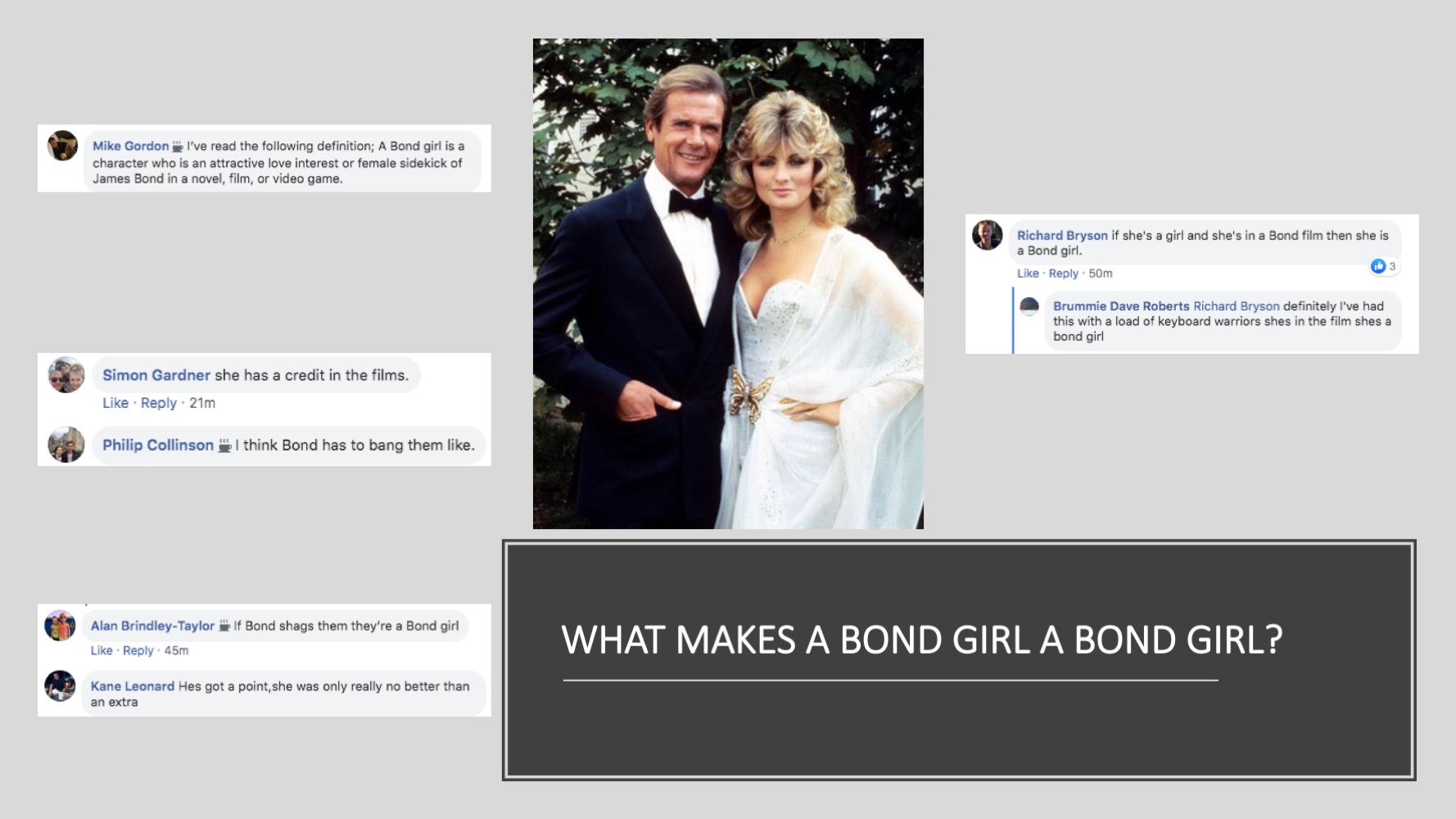 “Like all the ensembles of women who adored the sets of (mostly) the Moore films, Eon and the studio promoted them as Bond-girls.

If they were in any way babe-like and appeared as titillation, then yes, they are Bond-girls. Many appeared in Playboy pictorials, too. That’s just the way it was in those days.”