If it was Mike’s choice I’m sure he would have loved to have worn that one blue suit for all 3 films in every scene. 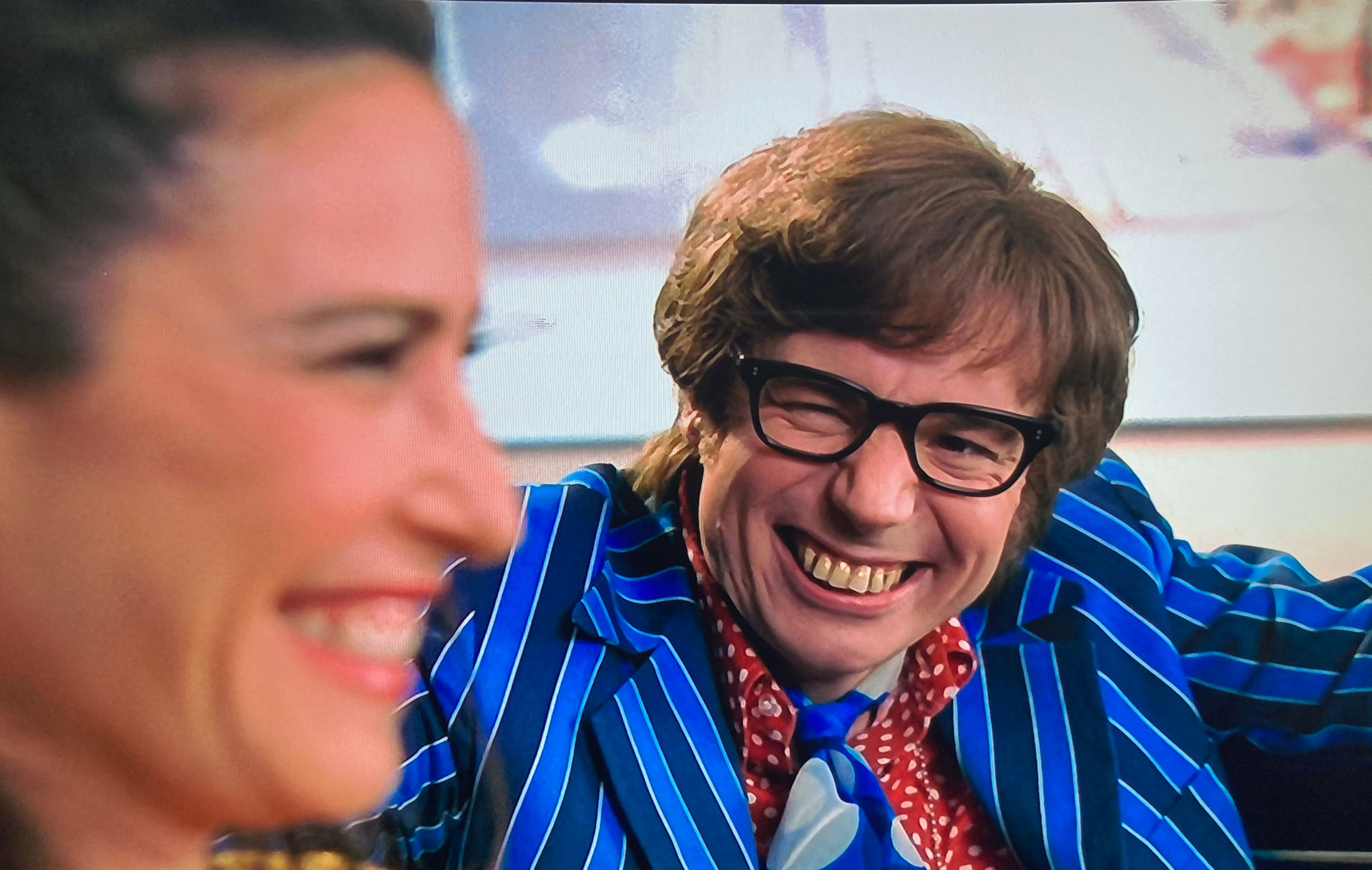 In this episode I speak to Costume Designer for all three Austin Powers movies (International Man of Mystery, The Spy Who Shagged Me and Goldmember) Deena Appel. We learn what films and musicians of the era were an influence on the overall look of Austin Powers.

Here are some short excerpts transcribed from the interview with Deena which you can listen to on the podcast. (Links below). You can also catch the interview on our YouTube channel. 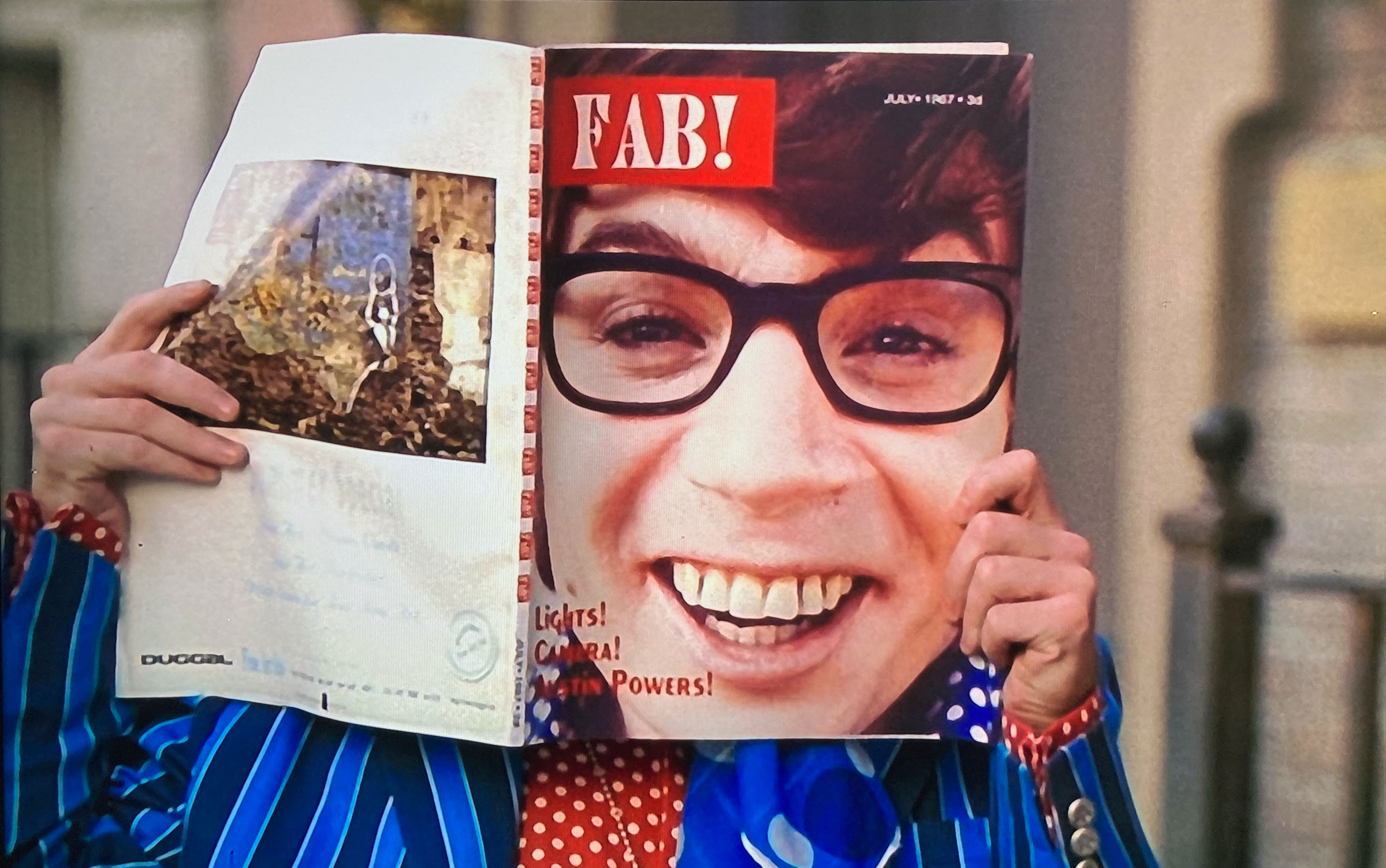 How did you get the role as Costume Designer for the Austin Powers movies?

DA: I think what clinched the deal was the two worlds of Austin and Dr Evil should be extremely separate visually. They were scripted Austin, the only description in the script was a blue suit, a frilly cravat, which we know it wasn’t technically a cravat, and Beatle boots.

Dr Evil was described in reference to Blofeld, but there were also mentions of colour in Dr Evil’s world; yellow, and red. I had presented the idea that the two worlds should be so completely separate. Dr Evil’s world should be completely monochromatic and completely void of colour, and Austin’s world will be an explosion of pattern and life so that when you were in one world, you were starved for the other. And you’d have a real sense of which world you were in.

Where did you source the inspiration for the designs?

DA: It was certainly a time to experience. We absorbed in every film from the period clearly all the ones that were referenced. All the Bond films, In Like Flint, almost anything we could get our hands on. French films, British films, and along with film research there was an extraordinary amount of magazine research as well. And that was done through a research library that Warner Brothers used to have.

Where you would go through folder after folder, you’d go through men’s suits or accessories or evening wear or lingerie, you have to look at physical paper. There was another source through Lucas Film.

I had binder after binder of research that I had done.

They would have a research library that was accessible to the public you would put in a request of what you were looking for and they would Xerox their own magazine tears and send you hard copies of a huge stock of Xerox research. 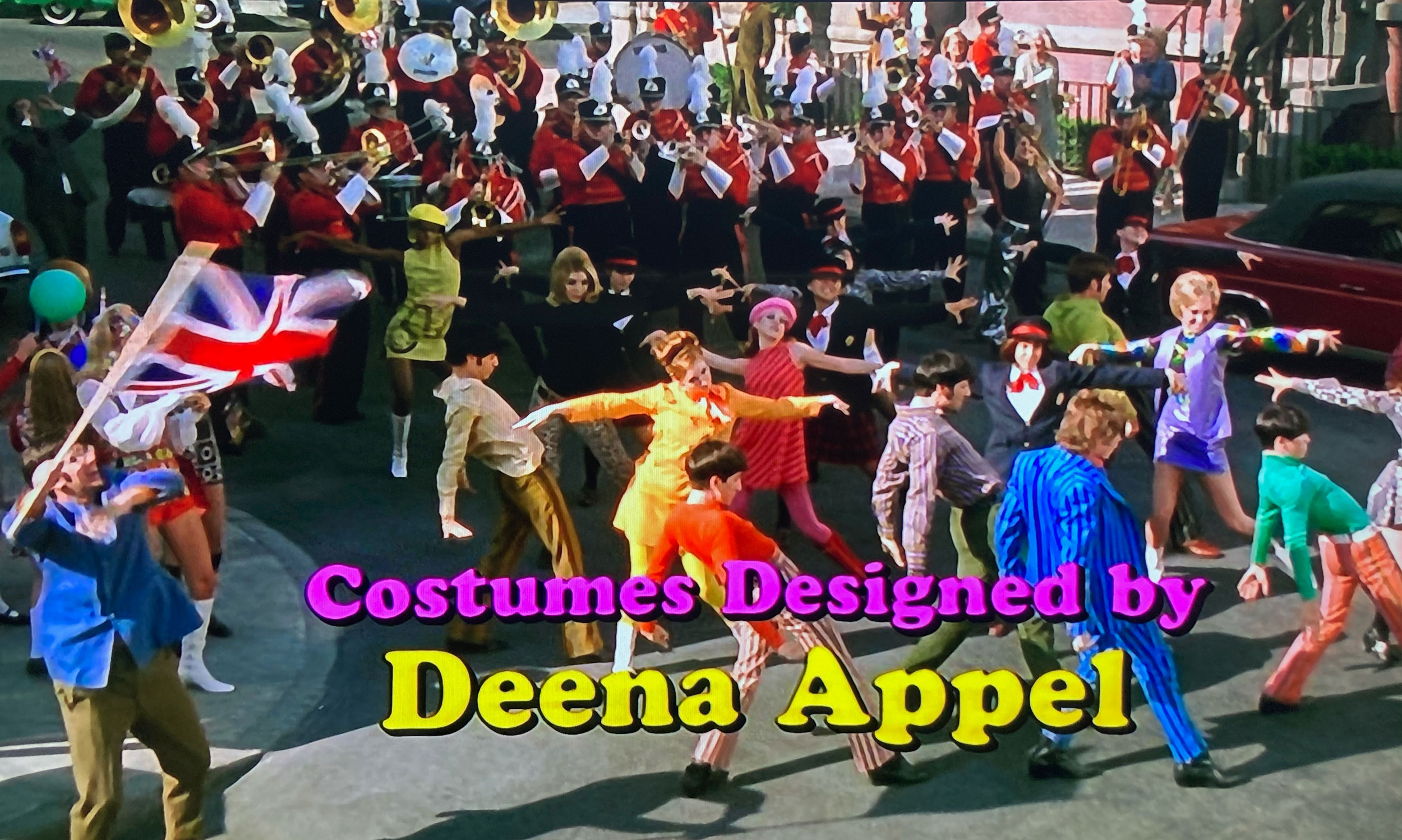 Where there any musical influences from the 60s that inspired the designs?

DA: A lot of Austin is not just film, but George Harrison was a big influence for me. I was looking at The Beatles and their transformation and just what a dandy George Harrison was specifically. And so there are very specific references to his style as well.

Can you talk about the silhouette of that famous Austin Powers blue velvet suit?

DA: In terms of the whole silhouette I had mentioned that Mike had wanted whatever it was to be iconic, whatever that visual was to be iconic. Blue was never a colour I ever liked and still till this day don’t love. So I really looked hard for the perfect shade of velvet which was this peacock blue, which was in reality more of a teal than blue.

I just knew I didn’t want it to be a royal blue suit.

If you notice over all the films with suit in particular I stuck to a specific silhouette and changed the colour, pattern or fabrication. There were occasions where I would do a different shape like in Las Vegas there was a double breasted. 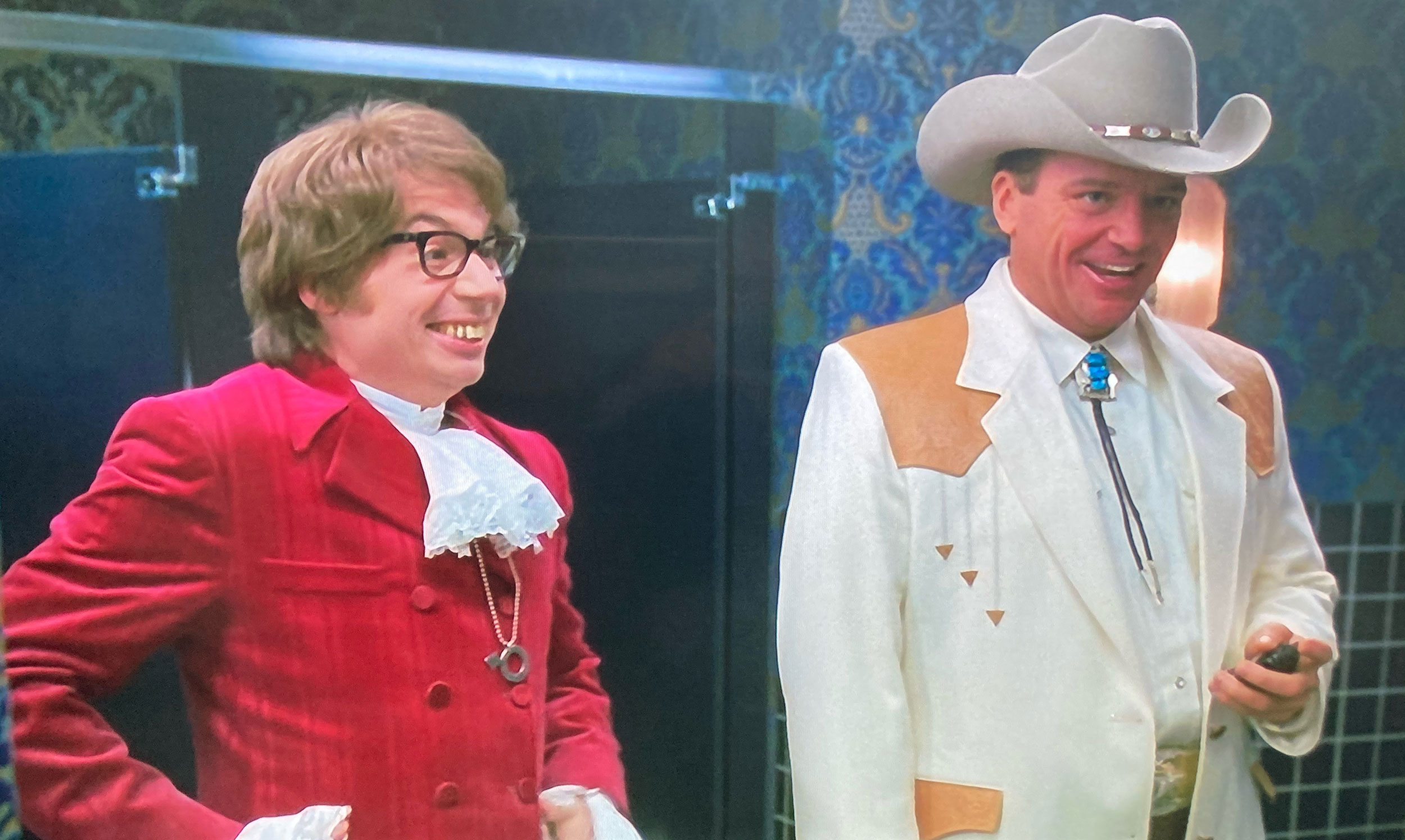 The brocade jacket on Carnaby Street later, there were definitely different silhouette but through all three there are very particular silhouette with the curved hem. That curved hem was a George Harrison idea that I had seen. That curved hemline was really intriguing to me because there was something feminine about it.

I also had the idea the idea of having the suit silhouette and then the man about tan casual side, when he’d wear his striped shirts and jaunty shirts, cufflinks or striped trousers. There were some variations. 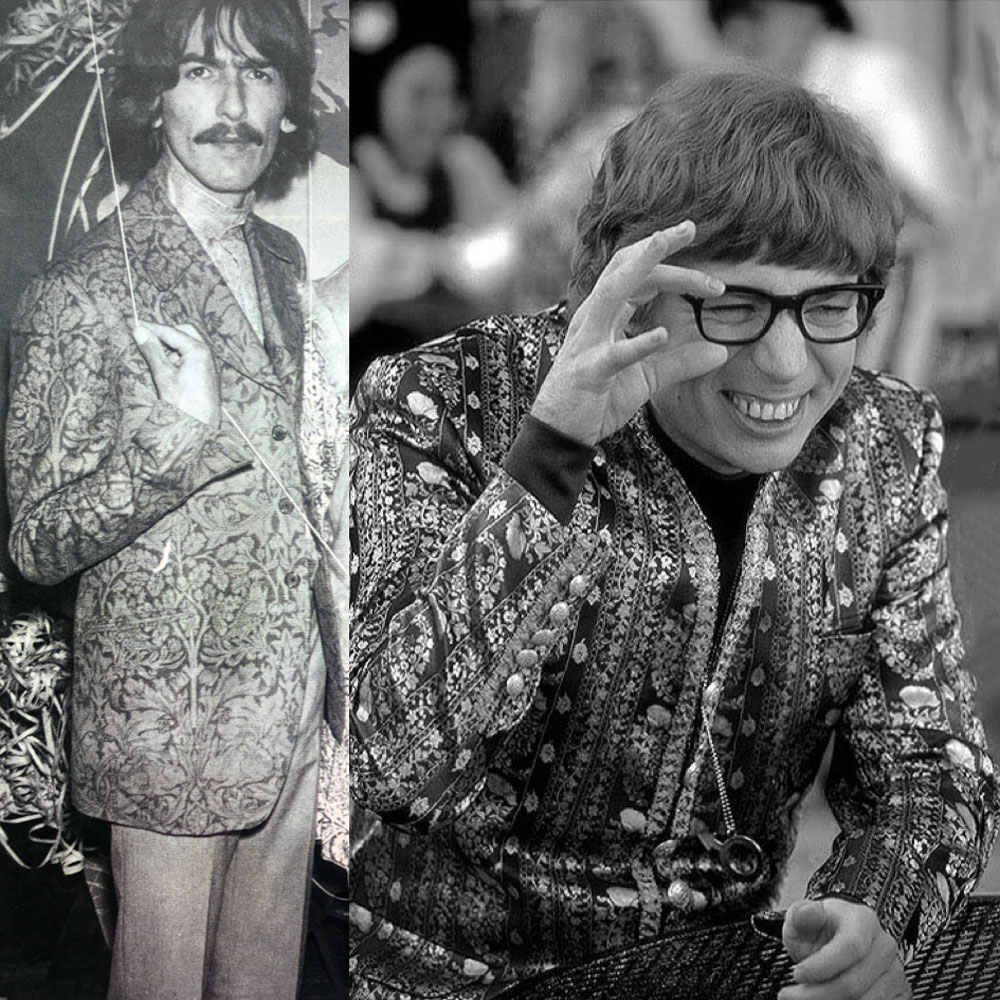 Was there anything off the peg?

DA: It’s amazing to me how it lives on. Everything that, anybody that opened their mouth wore was built there was nothing that was on the main cast that was not made specifically for them. There were, we also made a lot of clothes for background, the army, the club scenes. I would do a lot of collecting, we made quite a bit to spruce up the vibe. I had a rule that all the patterns were very strong and graphic, and nothing was fussy.

Everything had to be made. All of Mike’s suits that were made at Universal by Master Tailor Tommy Velasco were expensive. They were beautifully tailored. No scrimping on any of that so finely tailored garments, so they added to the quality of it. 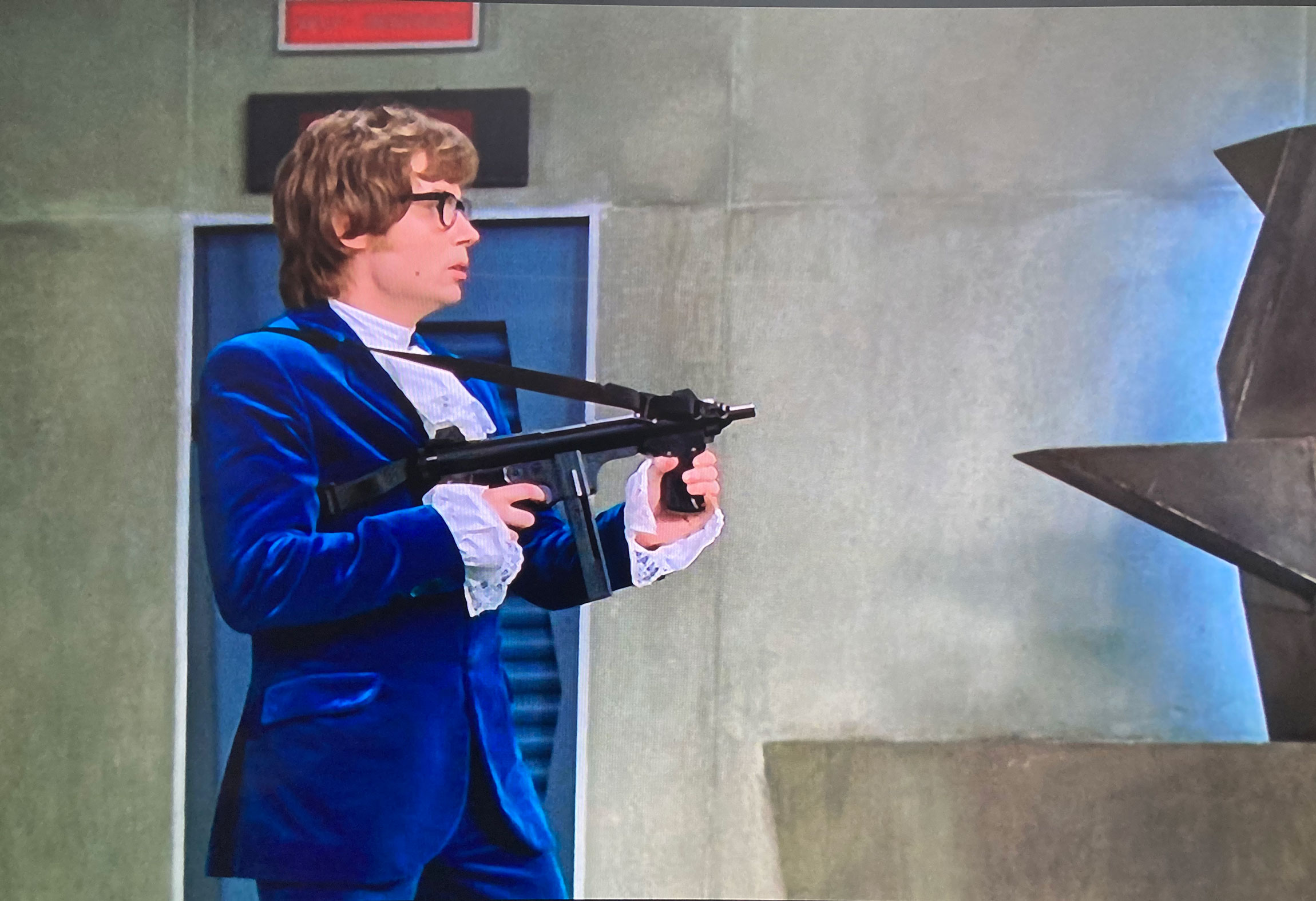 Can you talk about Tommy? Any lasting memories?

DA: Tommy was truly a remarkable craftsman he was a very unassuming man. He always wore this tan jacket. He was a small man, of advanced age. When we were working I think he loved the comedy of it. He was surprisingly game for all that we gave him, so much of the research came into acquiring so much fabric. When we made the kilt  for fat bastard, that was first of all the fabric that I could imagine. A kilt in itself require around 15 yards of fabric but now here was a kilt for a man with an 80 inch waist. I remember saying to Tommy have you ever made a kilt before, he said ‘yes I made the kilts for Brigadoon‘.

He knew a thing or two.

When we did fittings with Verne, most of the fittings we did was him standing on the table so we could talk to him eye to eye. So Tommy was tailoring for Verne, I want to say 34-38 inches tall and fat bastard that was 80 inches round. 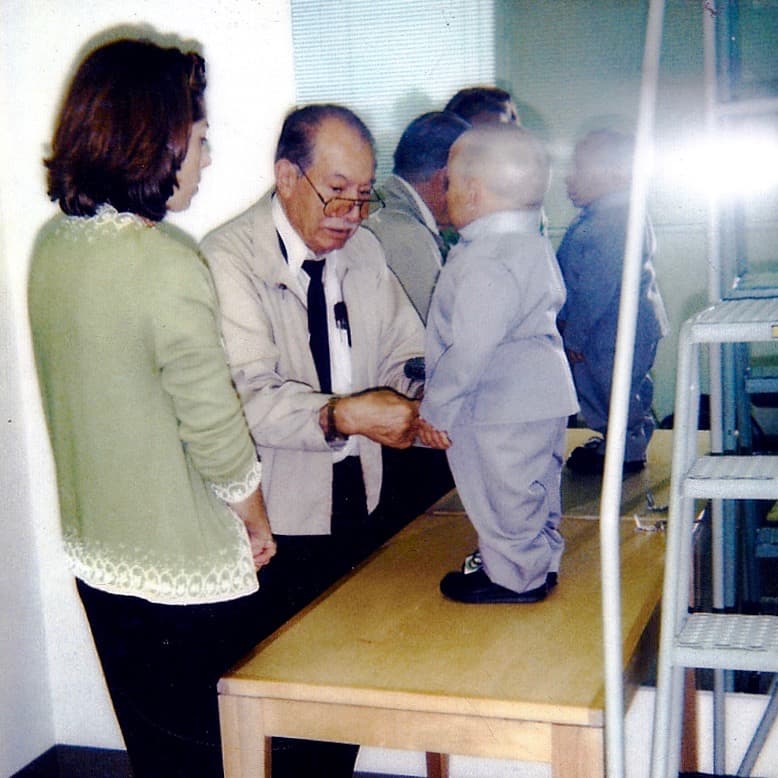 Where did you source the fabric for the suits?

DA: I did a shopping trip to New York for fabric. I would have swatches sent from San Francisco. And so I had tonnes and tonnes of swatches. A lot of Austin’s suits were made from upholstery fabric. I never had the money on these films. I never had the budget to create my own fabrics. That was just not an option. I just didn’t have the time or money. So the place I found the most vibrant and period appropriate fabric was in the upholstery department, surprisingly.

A lot of those fabrics were really heavy and weighty. There is an orange herringbone suit, I mean it was like a couch and how tommy was able to tailor these and craft these suits so beautifully was remarkable. 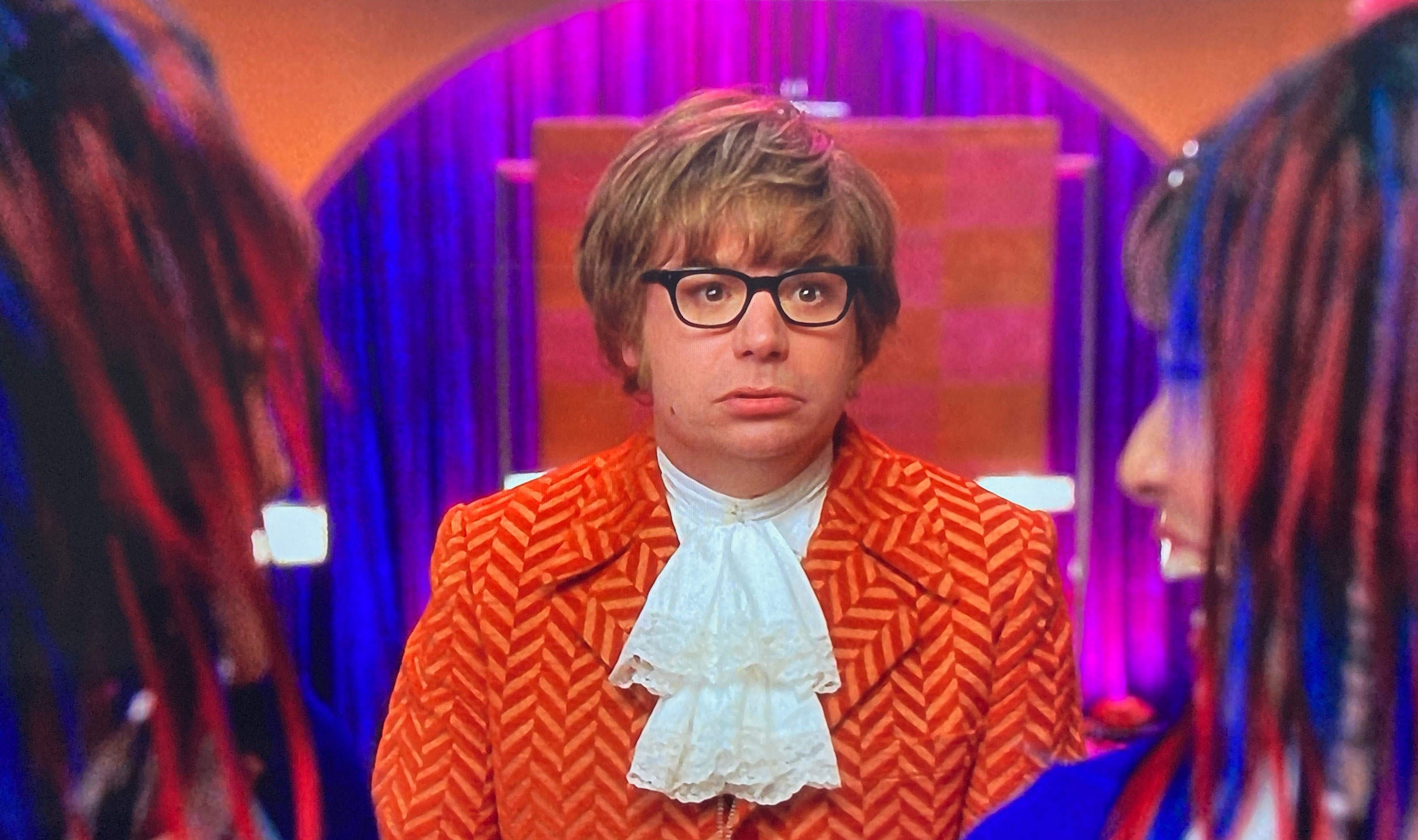 Were the opening musical numbers hard to do?

DA: They were epic. I remember from the 1st one we had a really small budget. We embraced low tech wherever we could and cheeky wherever we could and let it be. In terms of technology and all those things, with the first one I remember production saying “and I think we’re gunna add a marching band coming round the corner” and I was apoplectic. I knew we couldn’t afford to build a marching band and where were we going to get a marching band that was going to be remotely period appropriate? AND the right colour palette? It ended up coming together quite well.

The choreography of that was insane, for the 3rd film the spectacle, the film within the film. We had to build all those clothes for those films like Tom Cruise, Gwyneth Paltrow and Danny De Vito. It was endless. 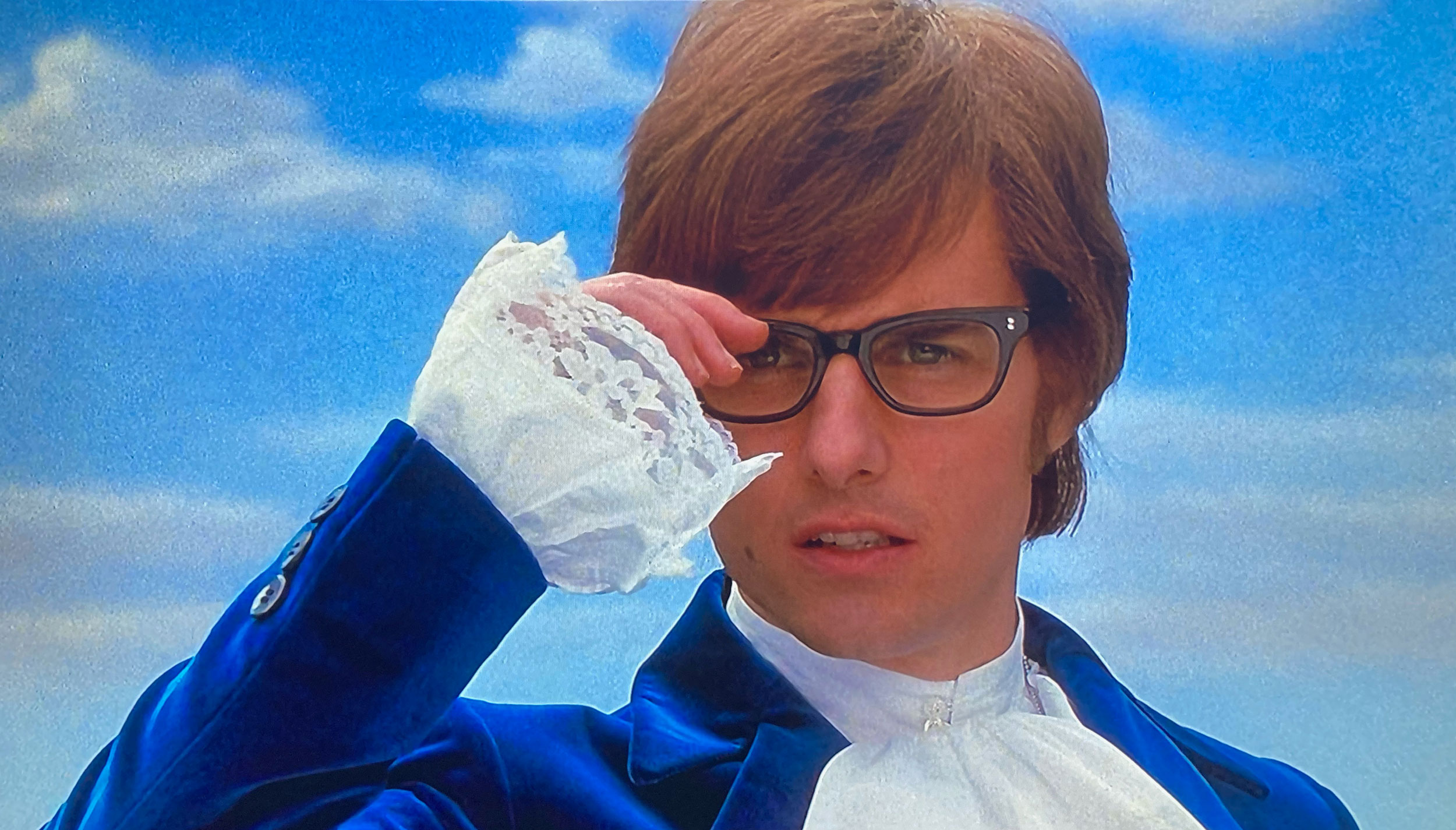 To talk about the suits and costumes of the Austin Powers films I’m also joined by Matt Spaiser of BondSuits and Nick Guzan of BamfStyle. The podcast is available to listen in the player below or on iTunes, Stitcher or Spotify. You can also catch our chat on YouTube.

Be sure to check out the second half of our chat with Deena Appel where she talks about designing the costumes for Michael Caine in Goldmember. The Austin Powers Trilogy is available to buy on Amazon. Rather than recommend a fancy dress costume, (they all looked pretty nasty) I’ve found a brand called Spoonflower that prints psychedelic patterns onto organic cotton. Appropriate for children and adult apparel items, including t-shirts, dresses, baby clothes, and more.