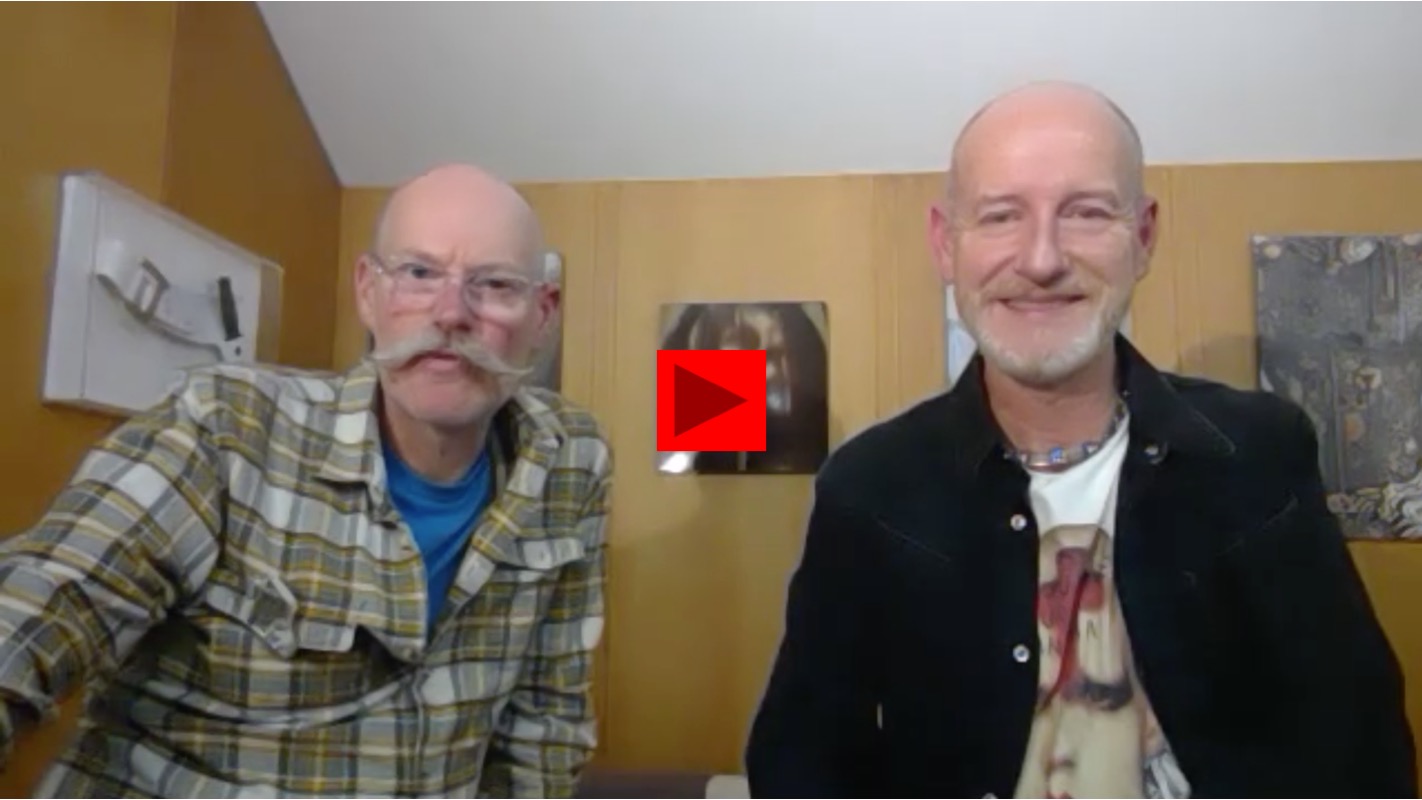 Click for a short 6 minute video of our interview with Keir Malem (left) Patrick Whitaker (right).

For episode 98 of the From Tailors With Love podcast I talk to Whitaker Malem. Patrick Whitaker and Keir Malem are body based designers/artisans working in art, fashion and film.

Patrick and Keir have made costumes for Die Another Day, Casino Royale, Hobbs and Shaw, Captain America, Wonder Woman to name a few.  They created the Bat Suit for Christian Bale. We talk about those experiences and below are some passages transcribed from the interview. 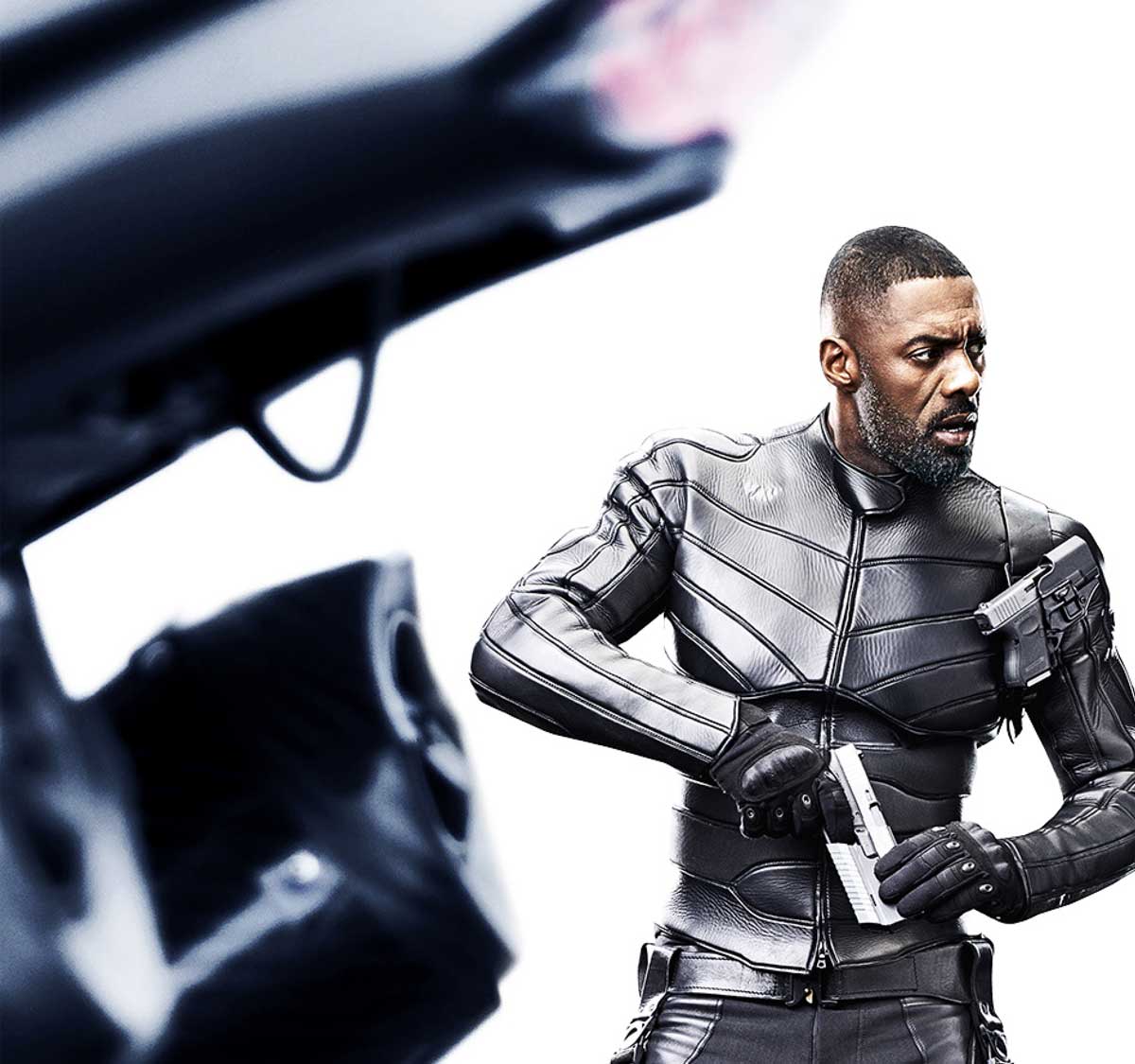 How did the two of you meet?

Patrick Whitaker (PW): I studied fashion at Saint Martins and graduated in 1987. I met Keir shortly before that and we’re a professional and personal partnership. We were young at the time, 21. He (Keir) helped me with my degree show.

We made a moulded leather bustier for that show and that’s kind of what we got known for and we got some very good press breaks in UK Vogue in the late 80s and we also did a lot of stage gear for Bros, bizarrely, the jackets and stuff like that. The company started from there. We always got lucky with press. We’d make very small collections and we’d get press on nearly every piece that we made.

We were stocked widely in Los Angeles and New York and one day people went into a store in LA that we were stocked at and they bought our stuff straight from the store and put it straight into the Mortal Combat movie. And then for the second mortal combat movie Talisa Soto wore our stuff. She wears one of our jackets. They bought it off the peg and then just stuck it in the film and just pretended it had been made as costume for the movie. 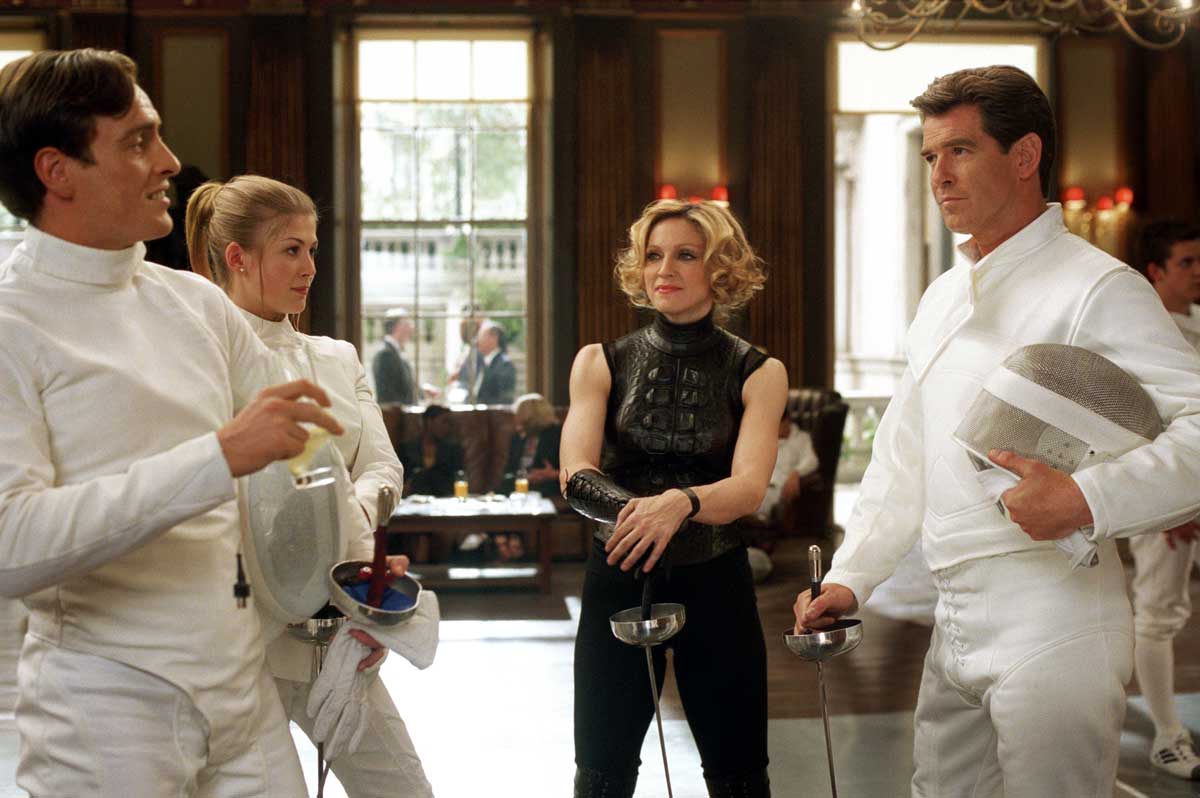 How did you get involved with the James Bond Franchise?

Keir Malem (KM): It was through Lindy’s (Hemming) assistant. She put the pictures of our press under Lindy’s nose really. Lindy phoned us up and said she wanted us to do some belts and then the Madonna thing came along. And then we did some waitress costumes for the Ice Palace scene, I think we done about 10 sort of silver tops.

We went and met Lindy, she was a lovely woman we got on very well. Because it was a homage to Ursula Andress coming out of the sea. And Paddy (Patrick) was an avid Bond fan anyway. Then we had the most amazing first fitting with Halle who has the most amazing glowing copper skin. She just won for the Oscar.

We made this belt and went off to Spain. And then Madonna got onboard because she was doing the theme tune. Lindy pulled a press magazine tear of a piece we already made and said ‘I want that for Madonna’. 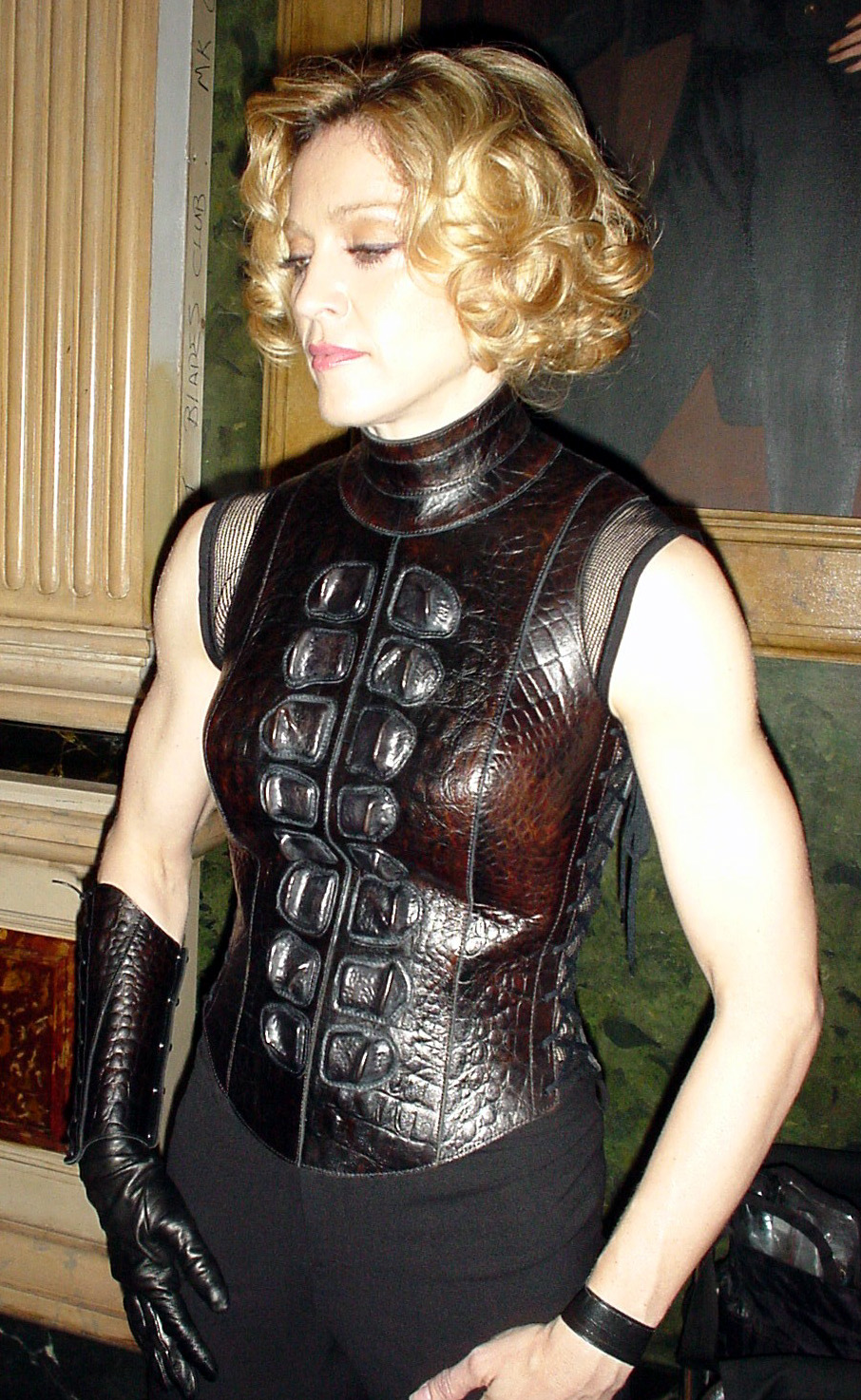 PW – she was very good, very sweet. She thought we were identical twins. The day filming that at pinewood, it was Lindy being very decent to us. I think she knew I was a bit of a fan anyway. She was keen for us to dress her (Madonna). It was an incredible set. It was like another world – such a crazy film, its definitely the campest Bond ever made that’s official.

Read about the costumes of James Bond in the book From Tailors With Love: An Evolution of Menswear Through the Bond Films, available on Amazon. 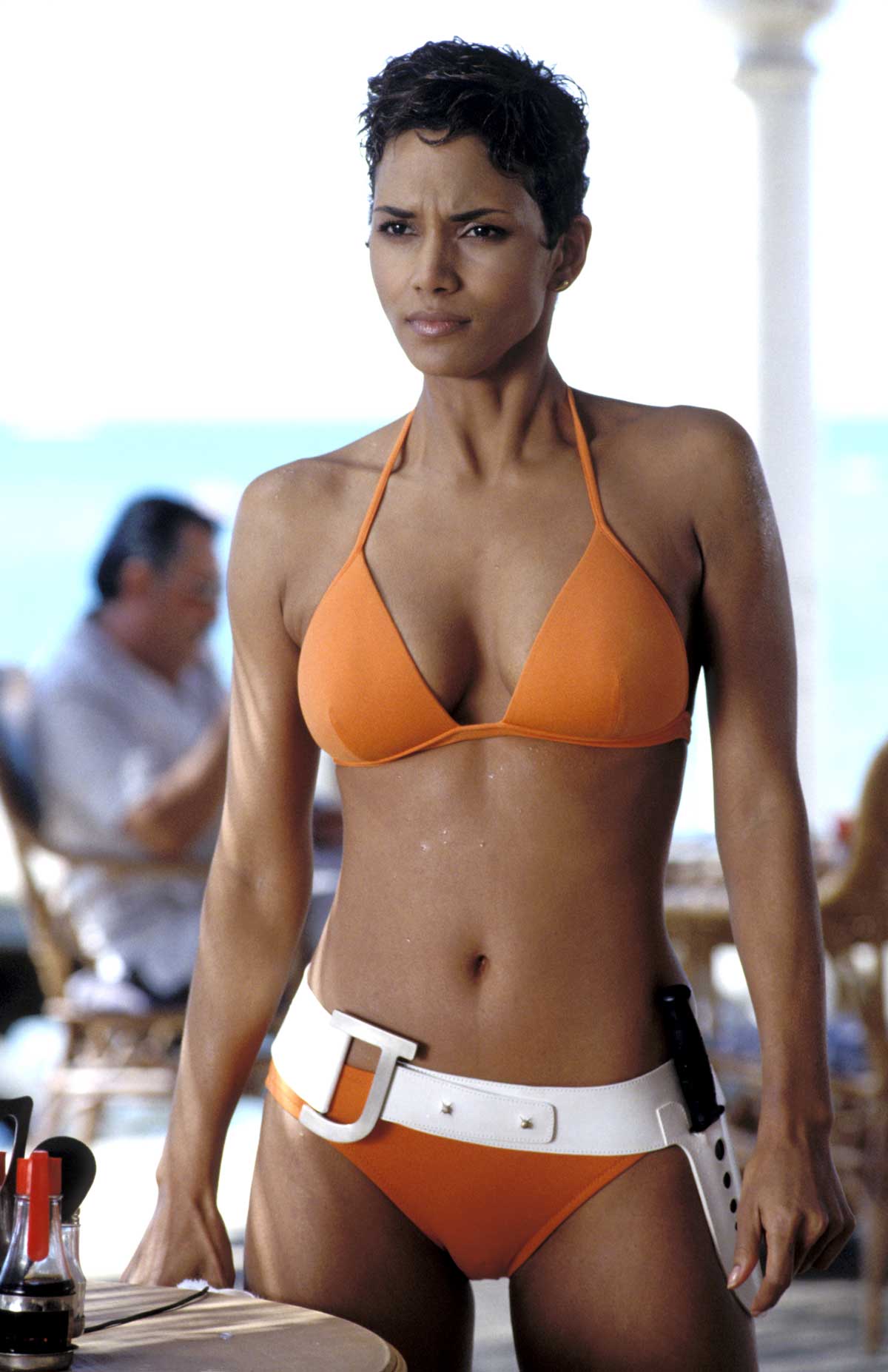 Can you talk more about the knife belt you made for Halle Berry?

PW – Arguably the most shown image of that year of any celebrity doing anything was Halle Berry coming out of the sea in the knife belt. There was a lot of worry about which side the belt was on, on Ursula in the original movie [..] and then we discovered, [..] 99% of the stills of Ursula had been flipped. We worked out, every time you see a black and white still it’s almost always flipped. 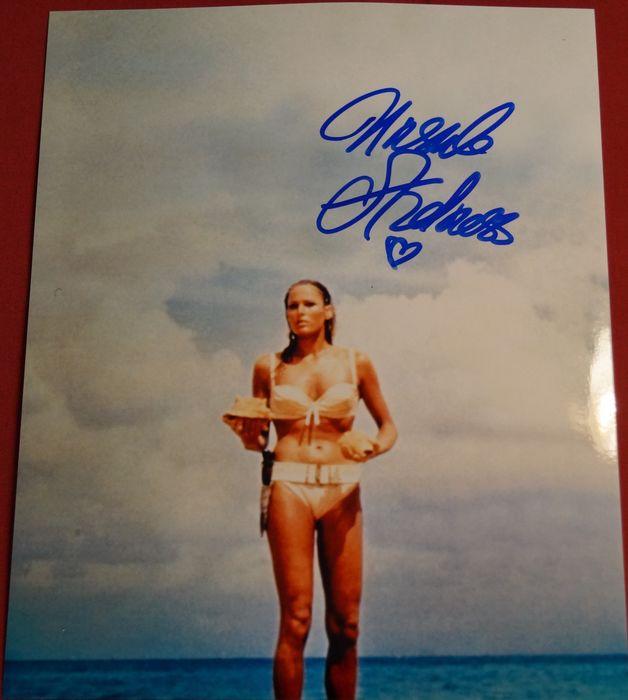 Flipped image with knife on the other side. Image Source: CataWiki

And how many did you make?

KM – Because it was our first films we made one for ourselves.

PW – We had that one and Lindy has one and the rest are with EON. The buckle was always going to be a D buckle and then, this idea came up. We sort of had to make it a J for Jinx. And lindy bought into that. It’s a really nasty K-bar knife. We bought one for us and one for Halle and I think only two came over from America.

I said to Lindy I thought it would be good to have holes in the scab so the blade can show through. It’s a bit of a Bond thing, having holes in things to make them a bit lightweight and industrial looking. I was thinking of Tee Hee in Live and Let Die the arm has holes in it. 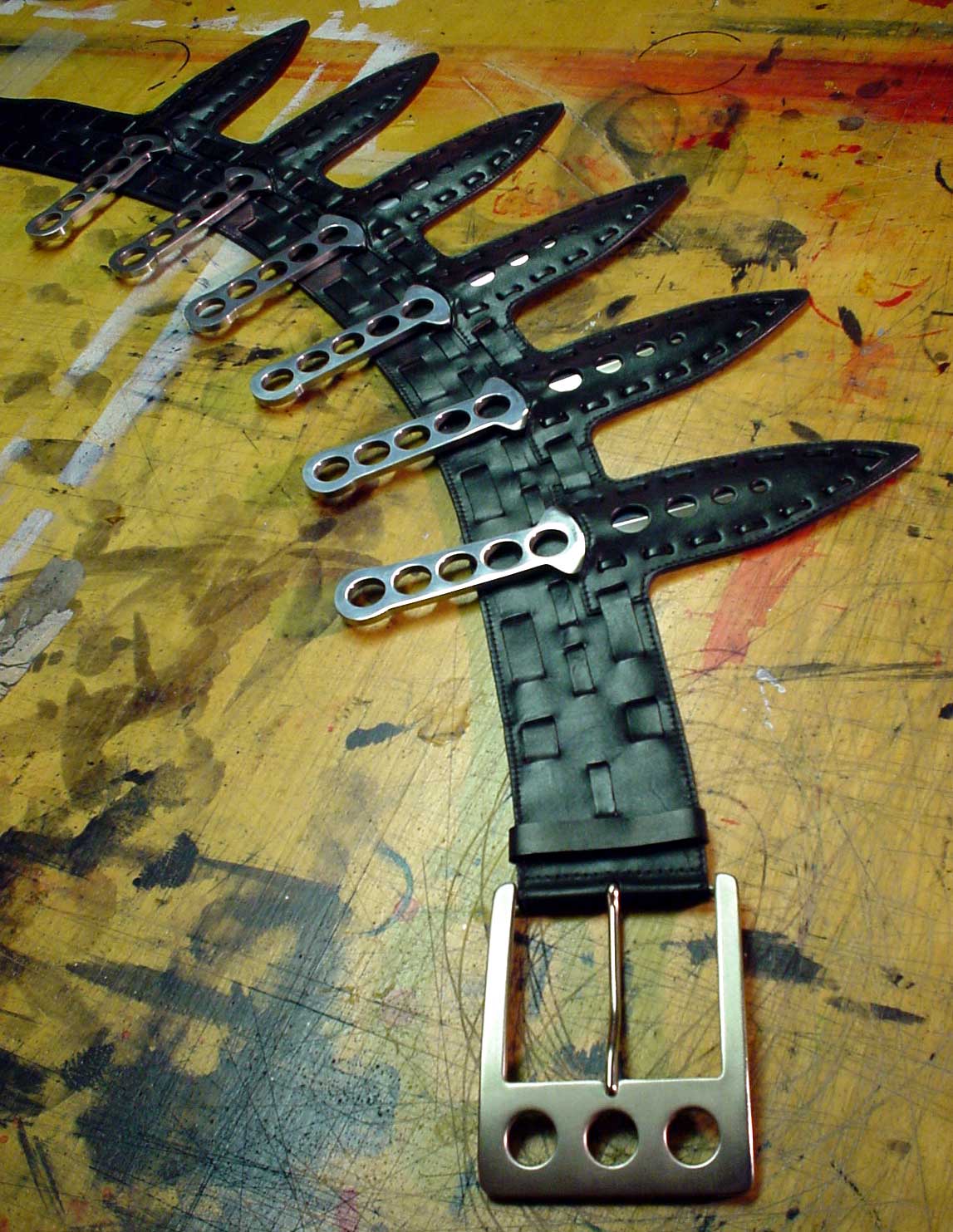 The full interview with Whitaker Malem is available to listen in the player below or on iTunes, Stitcher or Spotify. Don’t forget to leave a review on your smart phone there to get a ‘thank you 007’ on the podcast. Be sure to give Whitaker Malem a follow on their instagram here.

Check out the short video I did examining the Bat Suit Whitaker Malem made for Christian Bale close up at SKY HQ.

Photos for show notes where not captioned were supplied on behalf of Whitaker Malem to provide context to the story.