To Catch a Thief – Is Cary Grant Still Influencing the Style of Today? | #110

Firstly no one is going to look as effortlessly cool as Grant.

Pete very kindly asked me to write a few word’s about Cary Grant’s inspired Jersey’s & light pastel blue /grey? flannels he wears with such elan in “To Catch a Thief.” It’s such a spectacularly paired back look it would be remiss not to try to emulate the great man. 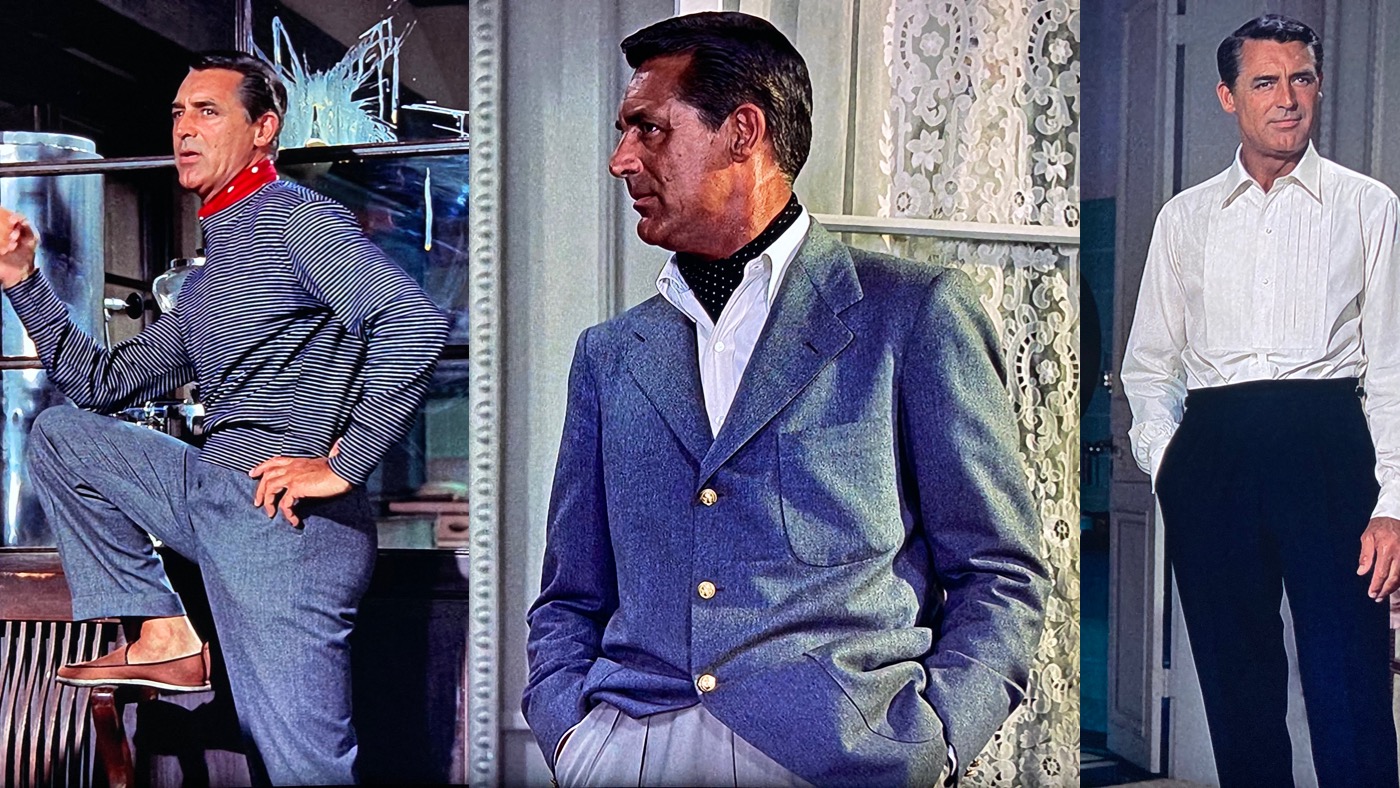 Click to watch the interview with my guest John Williams about To Catch a Thief on YouTube. According to Sajid the boat shoes that Grant wears on the left photo are bespoke from Maxwell’s Jermyn St. London. They relocated from Dover St years ago. Now under the banner of John Foster another great name in English shoe making.

There has been a lot written about Grant’s Jersey’s over the years, that it’s a Breton Jersey (it’s not, they have wider stripes). He apparently found it and the neckerchiefs he masterfully wore around his neck on location. The Jersey is navy inspired but the horizontal stripes are thin and not as I said earlier, as wide as a Breton or indeed the Russian “Telnyashka”. 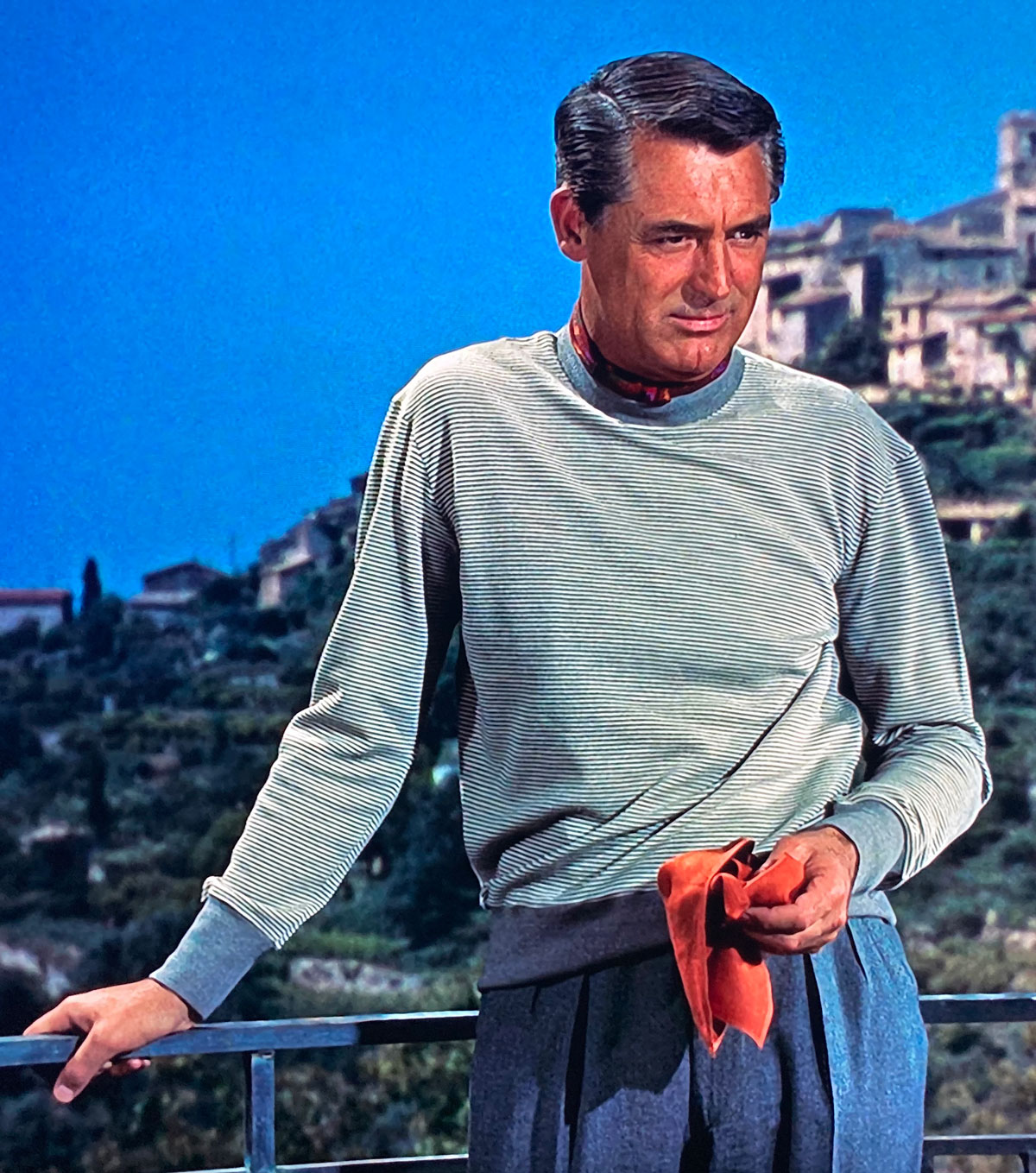 I think they were a staple of the fisherman along the riviera to distinguish themselves from the French naval uniform the marinière tricot rayé (striped sweater ) that would be more visible with it’s wider stripes if a sailor fell overboard. It became known as the Breton as historically a lot of sailor’s came from that region. 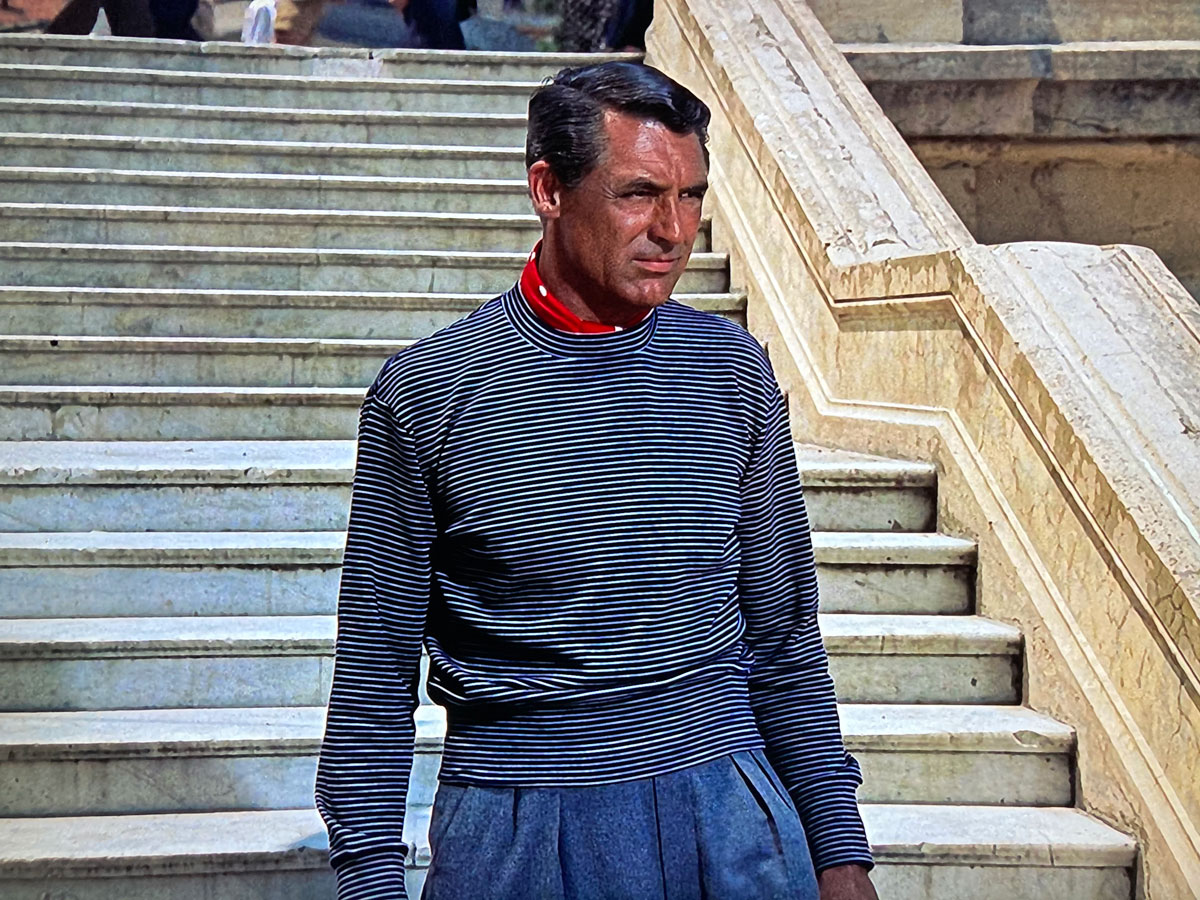 The flannels are very much of the era (1955) with double forward pleats cut very comfortably.

For the weather of the riviera they must have been a very light weight otherwise they would be very uncomfortable. The lightest flannel I can think of is escorial (295gms / 10.5oz) which is as soft as whipped cream.

I very much doubt the flannel that Grant wore was anything as light as possible probably 350/400gms /13-14oz. Pete asked if I get requests for 50s style trousers hence the write up. We have had a few enquiries but nothing materialised. Flannel trousers of course we’ve made plenty and in fact we have several order’s to complete in the next two month’s. 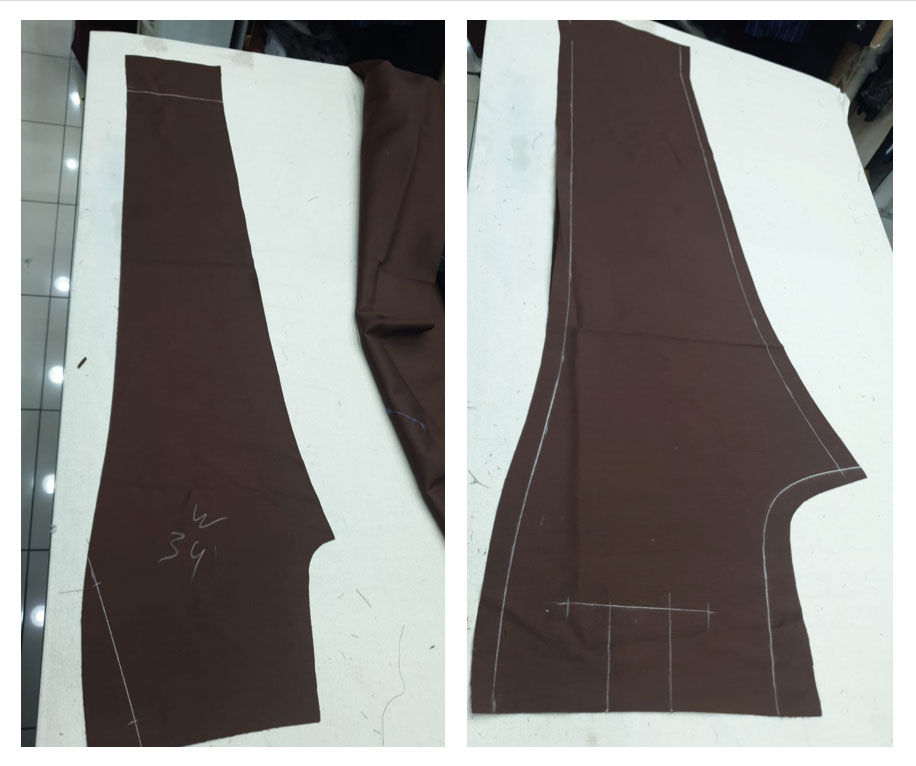 The last time I was buying fabric (October) I bumped into Kevin Rowland from Dexy’s Midnight Runner’s. Kevin is usually dressed in 50s inspired clothes. He wore a heavy red tartan flannel over shirt over a cream shirt with a bow tie. His trousers were high waisted very wide legged flannels with two inch turn up and exaggerated double forward pleats. We spoke for about ten minutes as we were the only two people there at the time.

He has a tailor he said as he can’t find the 50s inspired clothes he likes anywhere. A really interesting and very nice person who knew the chaps at the fabric store by their first names which proves he is a regular like myself. 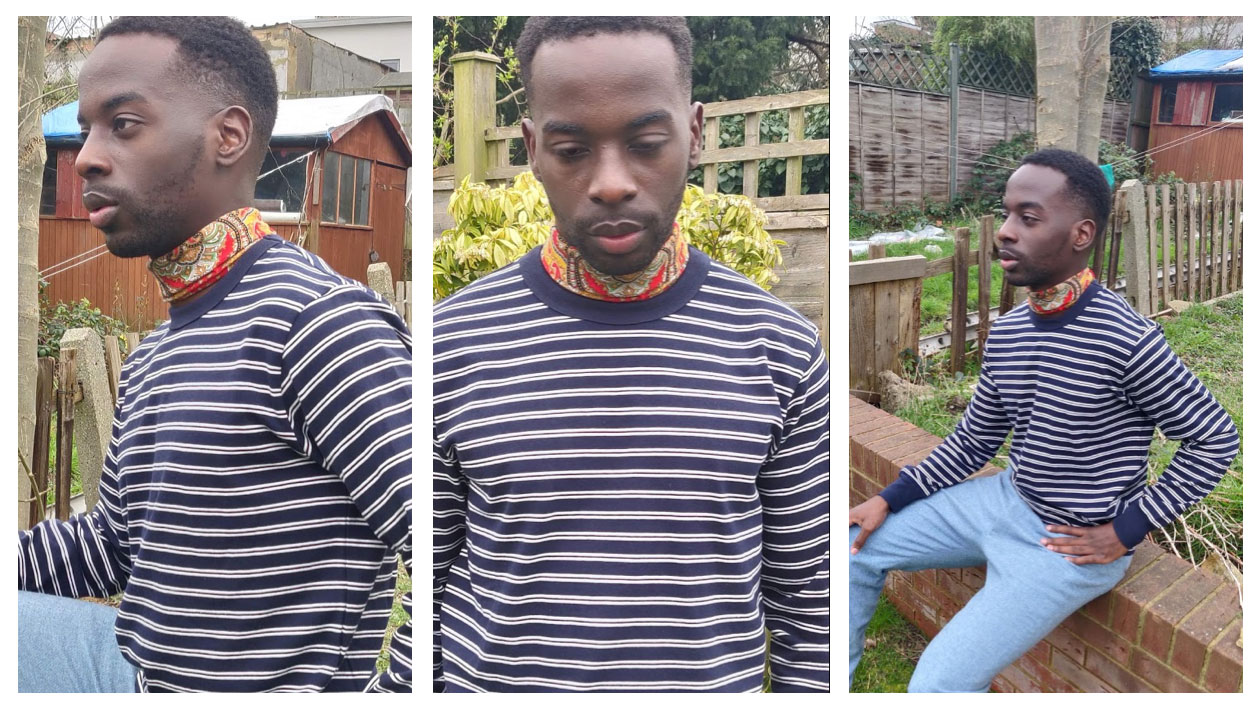 If anyone does want to commission a pair of trousers 50s inspired or otherwise please let me know. I’m always happy to talk shop but as a guideline, the starting price a pair of bespoke trousers the price is £395. It is dependant on fabric of course, as an example escorial flannel is £130+ a metre. 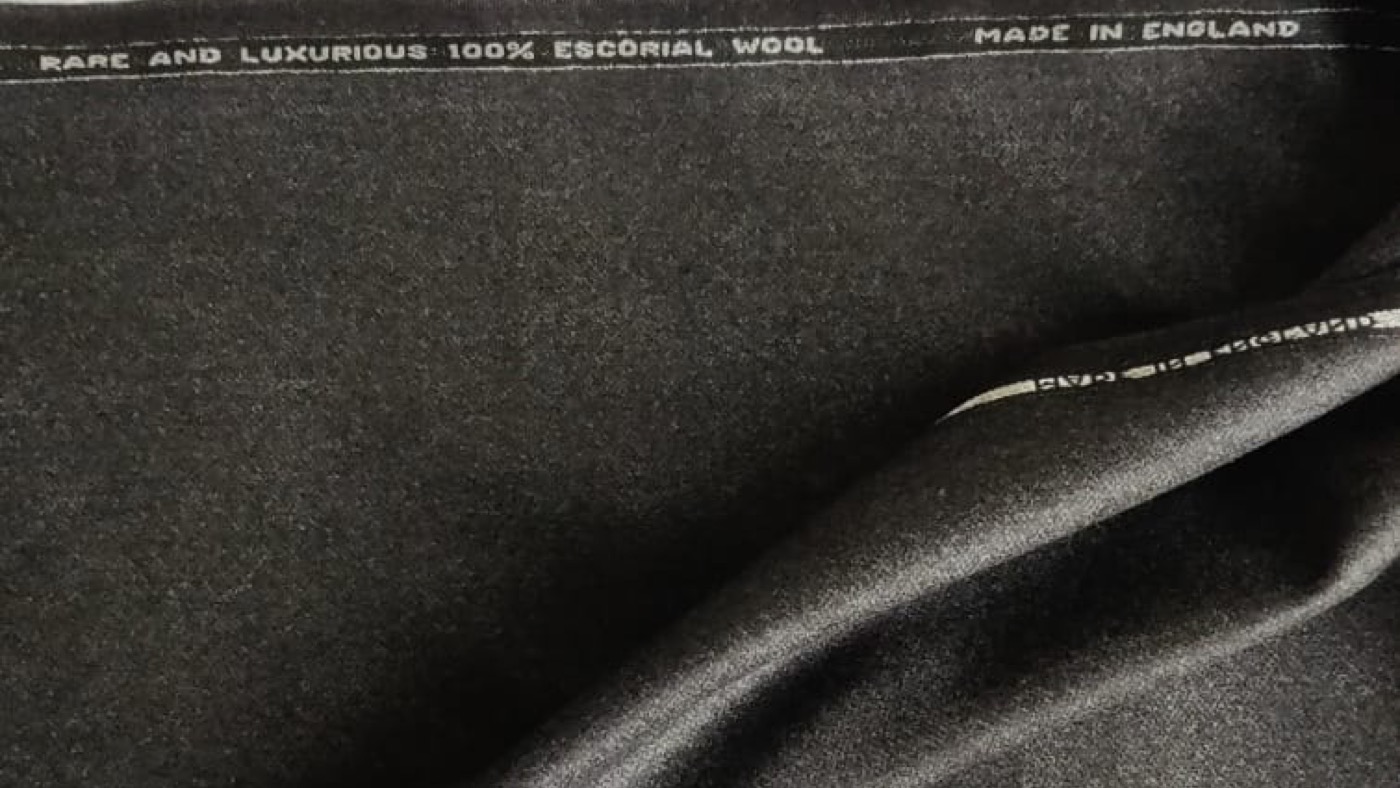 My first tailor back in the late 90s was Italian. His son is a cloth merchant in Soho. He said British cloth is higher quality then Italian when I asked what’s better. BUT the first cloth he recommended for my 1st bespoke suit (for my cousin Sophia’s wedding) was a super 100 worsted.

It was summer. The day of the wedding was 32C°. I knew nothing back in those days so I followed “the expert’s advice”. Never wear black unless one is an undertaker, security personnel or going to a funeral. Or all three. Never trust any tailor or cloth merchant who recommends black for a suit by the way.

(Below) Flannel sent by my Italian client double breasted suit. Ready in 3/4 weeks. Very fine flannel. Quality not as good as English flannel in my opinion. He didn’t like the shades of the flannels I posted him. His choice of course but it’s twice as expensive as the Dugdales samples I sent. 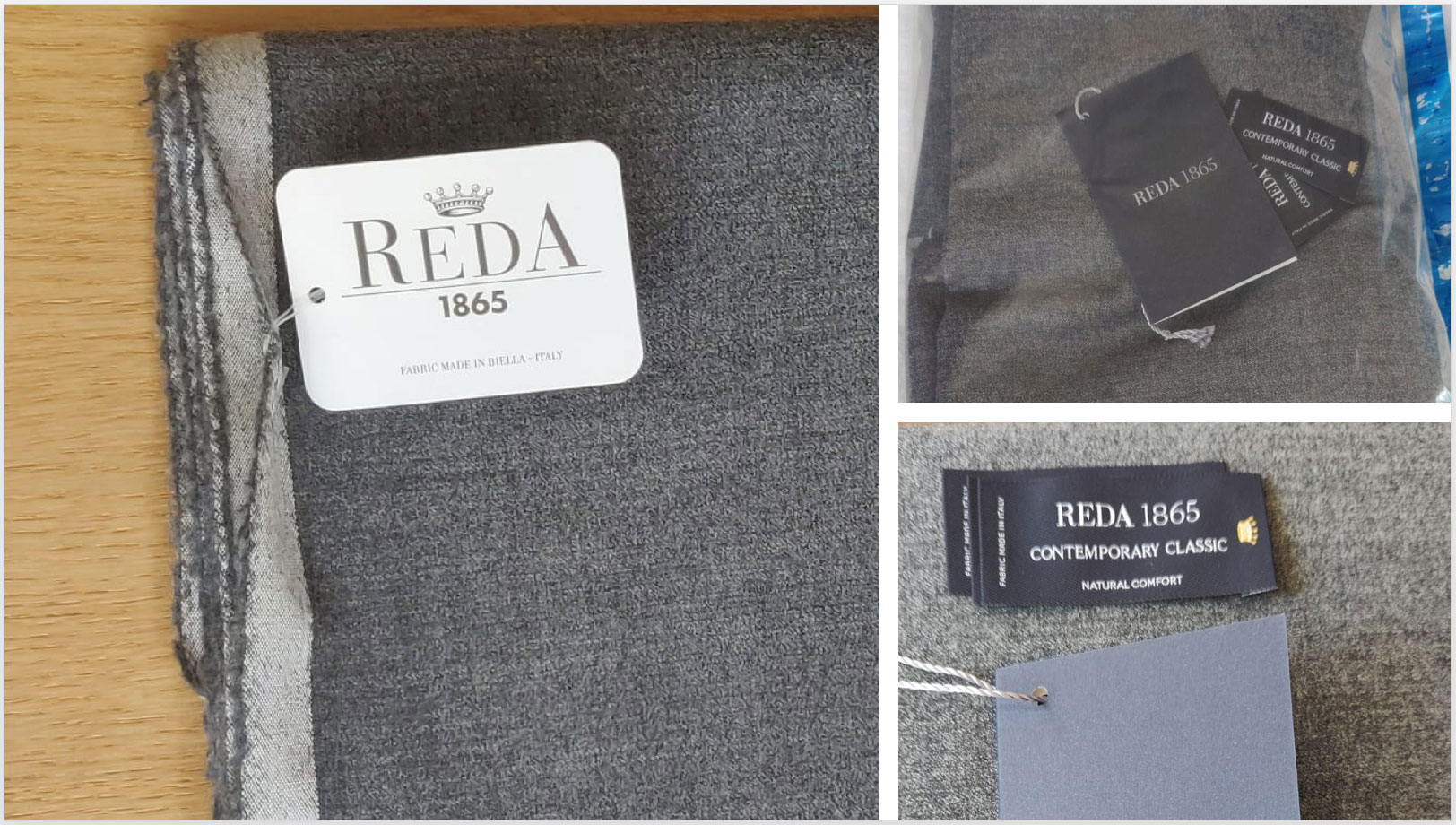 The neckwear is a Foularino. Neckerchiefs or bandanas don’t sit as well across the neck the way Grant folded the cloth. 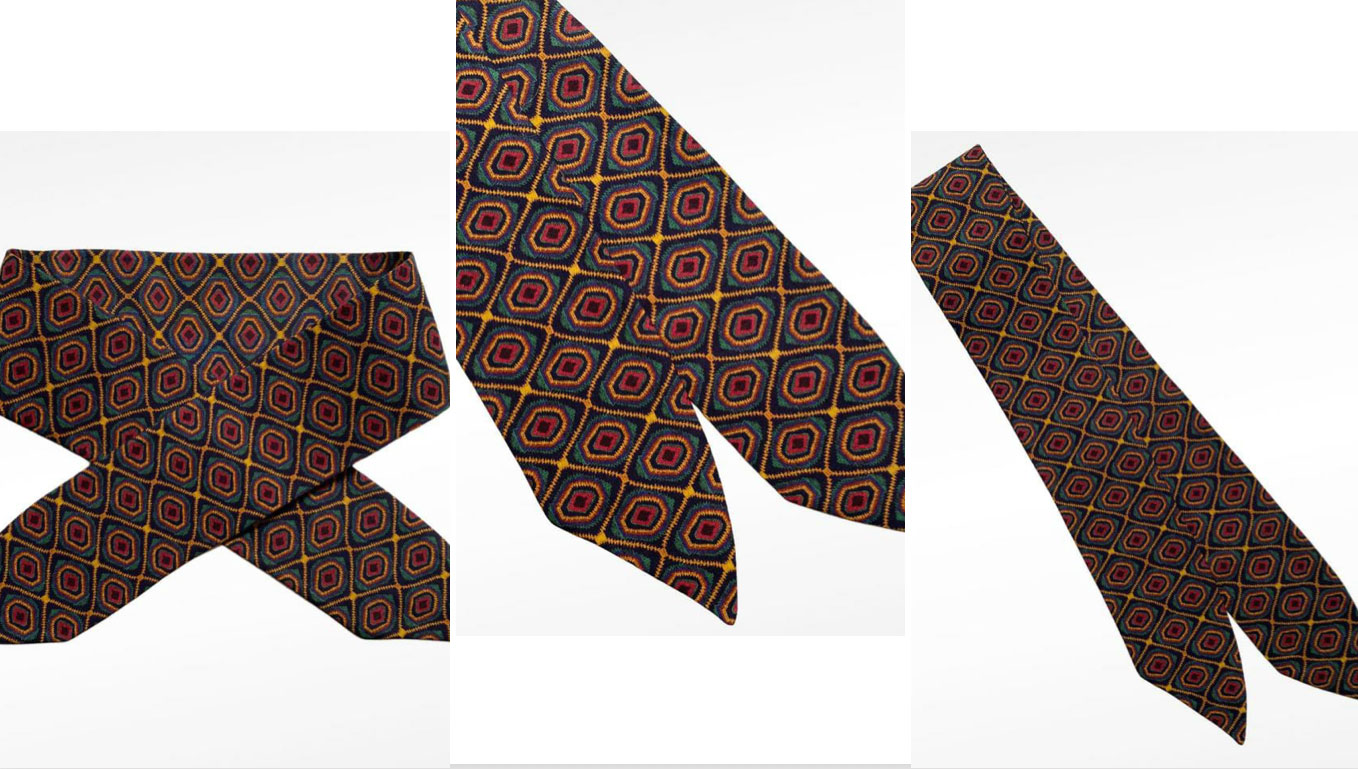 The full interview with John Williams from The Bond Closet about To Catch a Thief is available to listen in the player below or on iTunes, Stitcher or Spotify. Don’t forget to leave a review on your smart phone. Please give Sajid from Niven Tailors a follow on Instagram and hit him up if you’re interested in getting the Cary Grant look.

See the review of how Niven Tailors helped create the Half Norfolk Jacket from Diamonds Are Forever for a Bond fan here.

Cary Grant was always wearing some sort of collar. He was very self conscious of his neck (he wore an 18″ collar). His neck muscles were so big from his days as an acrobat and stilt walker. He used a collar to help minimise and hide his neck. – Henry Hawran

(With reference to the photo below) – Your more likely to see a grey sports coat in twill weave these days but with out a blazers metal buttons. Ryan Hall 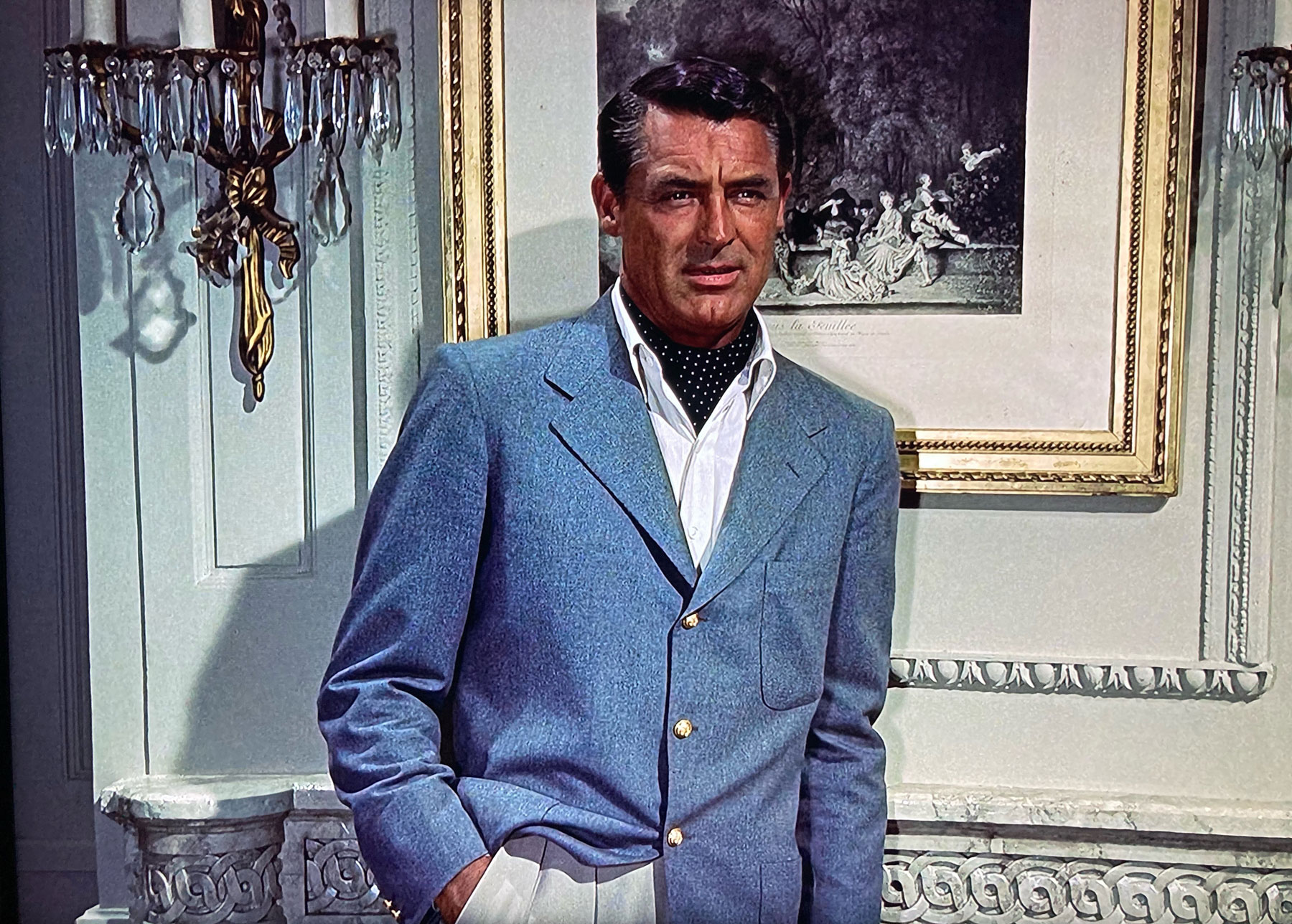 Update: Dec’ 2021: Hemingsworth have just released a hooped striped top in their ORIGINS collection inspired by the one Cary Grant wore. Click on image to shop. 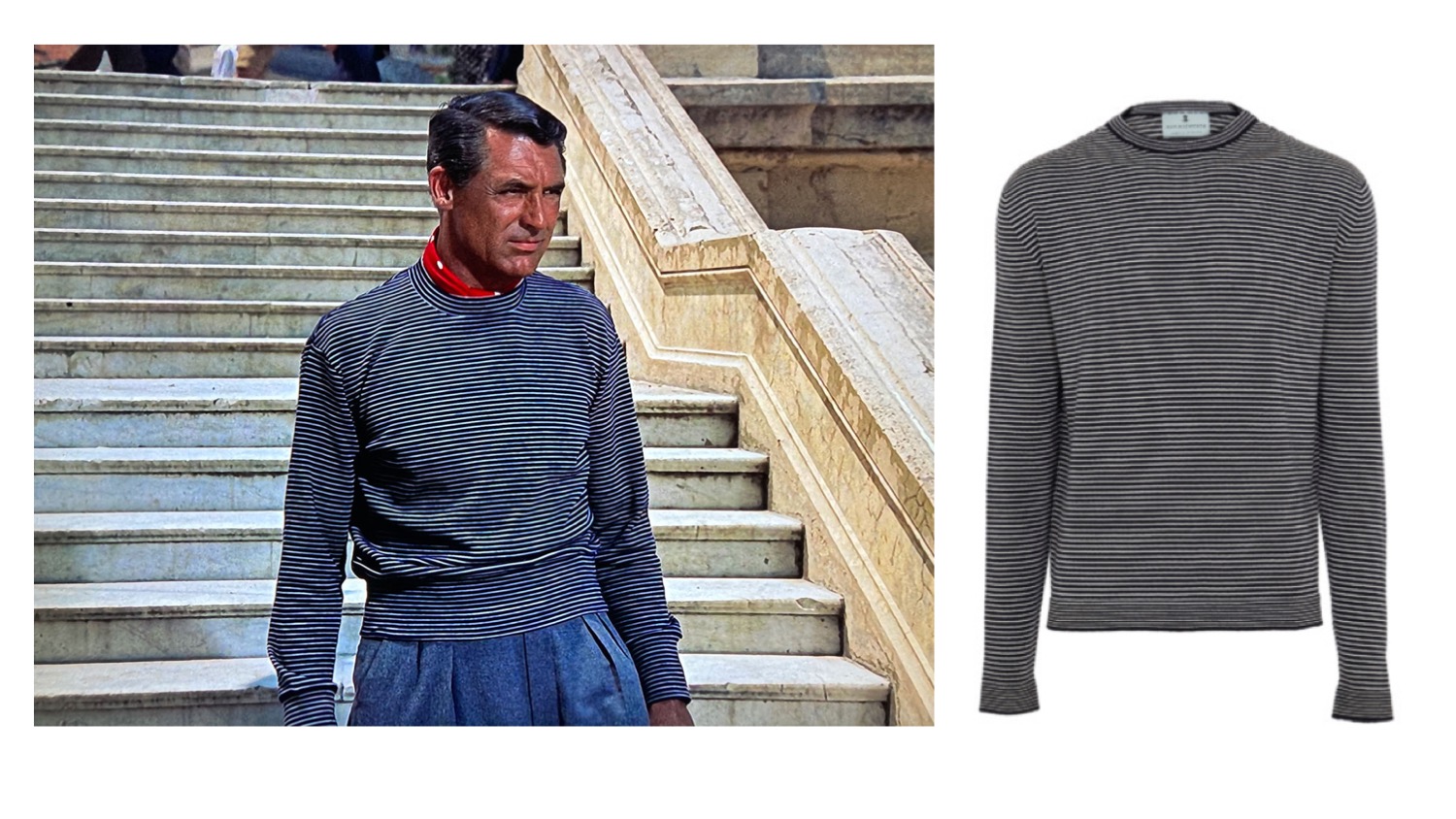