A corduroy jacket in Italy. I don’t think Freddie Miles would be that approving of James Bond’s wardrobe in No Time to Die. 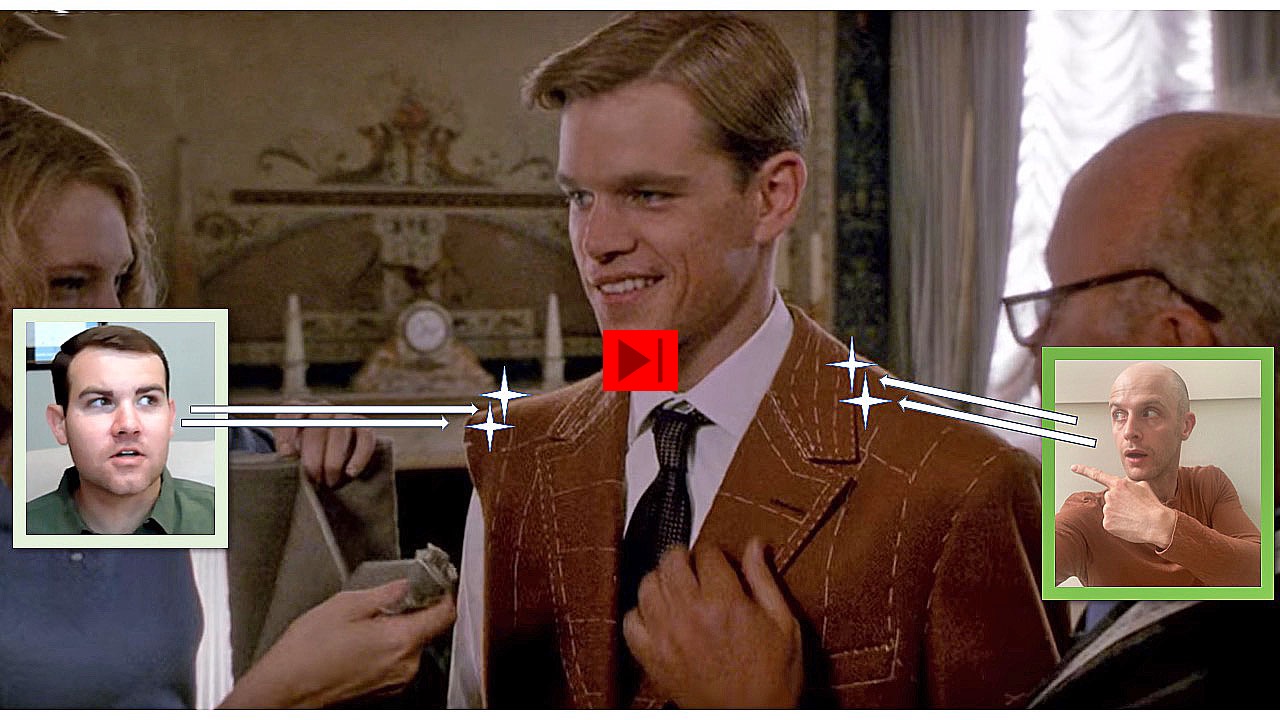 In episode #136 I speak to Kyle Barbeau of EasySmilesAndExpensiveWatches on Instagram about the psychological thriller, The Talented Mr Ripley starring Matt Damon and Jude Law. The costume designers credited were Ann Roth and Gary Jones.. The costumes were nominated for Best Oscar in the 2000 awards, but lost out to Lindy Hemming for Topsy Turvy.

VERY Rough notes from the Book

In the beginning Mr Greenleaf presents Tom with a watch which Tom Ripley describes as,

[…] a fabulously expensive watch but still an excellent one and a style he would have chosen for himself. A plain white face with fine black roman numerals in a simple gold setting with an alligator strap.

On the ship to Europe, to meet Dickie, Tom has a,

[…] sudden whim for a cap and bought one in the haberdashery a conservative blueish grey cap of soft English wool. He could pull the visor down over his whole face if he wanted. A cap is the most versatile of head gear. He could look like a country gent, a thug, an Englishman, a Frenchman, or a plain American eccentric depending on how he wore it. 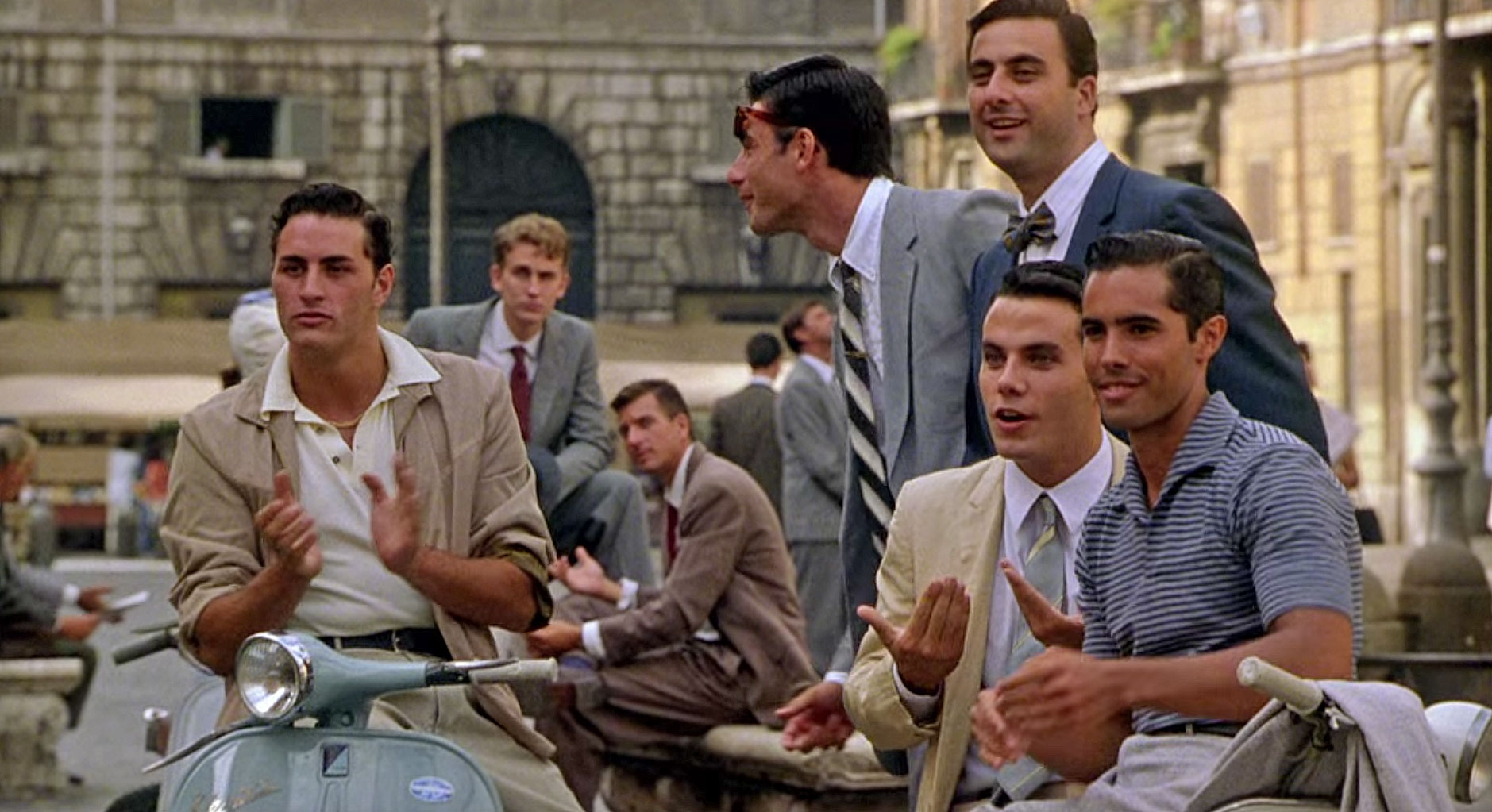 Upon meeting Dickie, the film plays very lose to the events played out in the book. In the film Tom puts on his brogues to go across to the beach in his lime swim shorts. In the book these shorts are described as,

[…] black and yellow thing, hardly bigger than a G-string.

What did Dickie Greenleaf wear in the book?

In the book the murder of Dickie is premeditated. In the film it’s an act of rage. Before Tom kills Dickie, Dickie is once described wearing,

[…] broken down sandals and soiled white pants, but sat there like he owned the place.

We know Dickie could be quite flashy with his style and also a little vain. He had his initials monogrammed on,

[…] the white and blue striped shirt in red letters on the pocket. 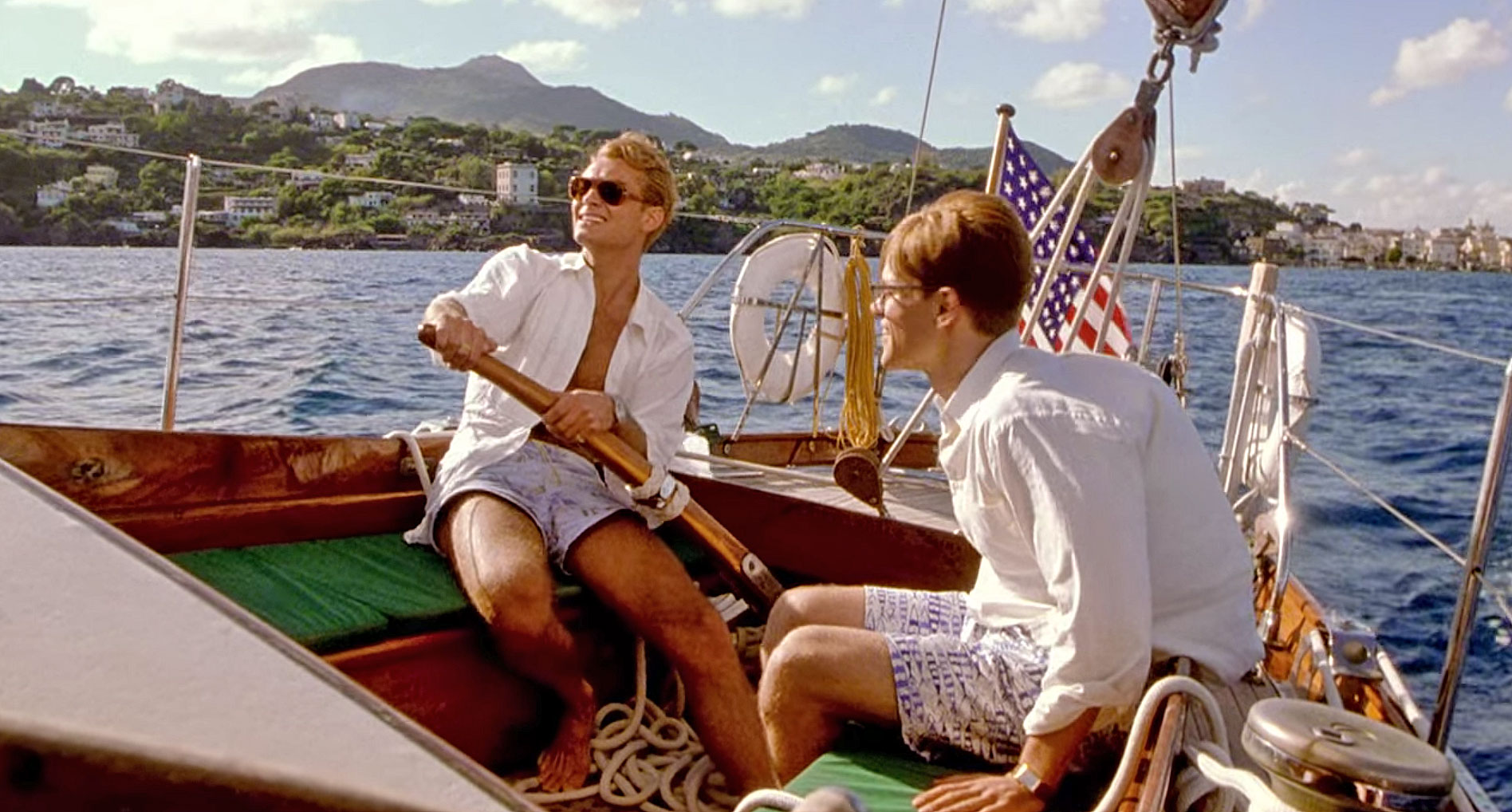 When Tom assumes the identity of Dickie after his murder, he uses his clothes and this becomes his suit of armour. We learn more about what Dickie wears as soon as Tom kills him and inherits his wardrobe.

Tom is described as wearing Dickies,

Tom held a lot of reverence for Dickies clothes,

The cuff links the white silk shirts, the old clothes, the worn brown belt with the old brass buckle, the old brown grain leather shoes, the kind advertised in Ponch to last a lifetime. The old mustard colour coat sweater with sagging pockets and an alligator wallet from Gucci all his, (Dickies) and he loved them all.

And loathed going back to his own wardrobe, 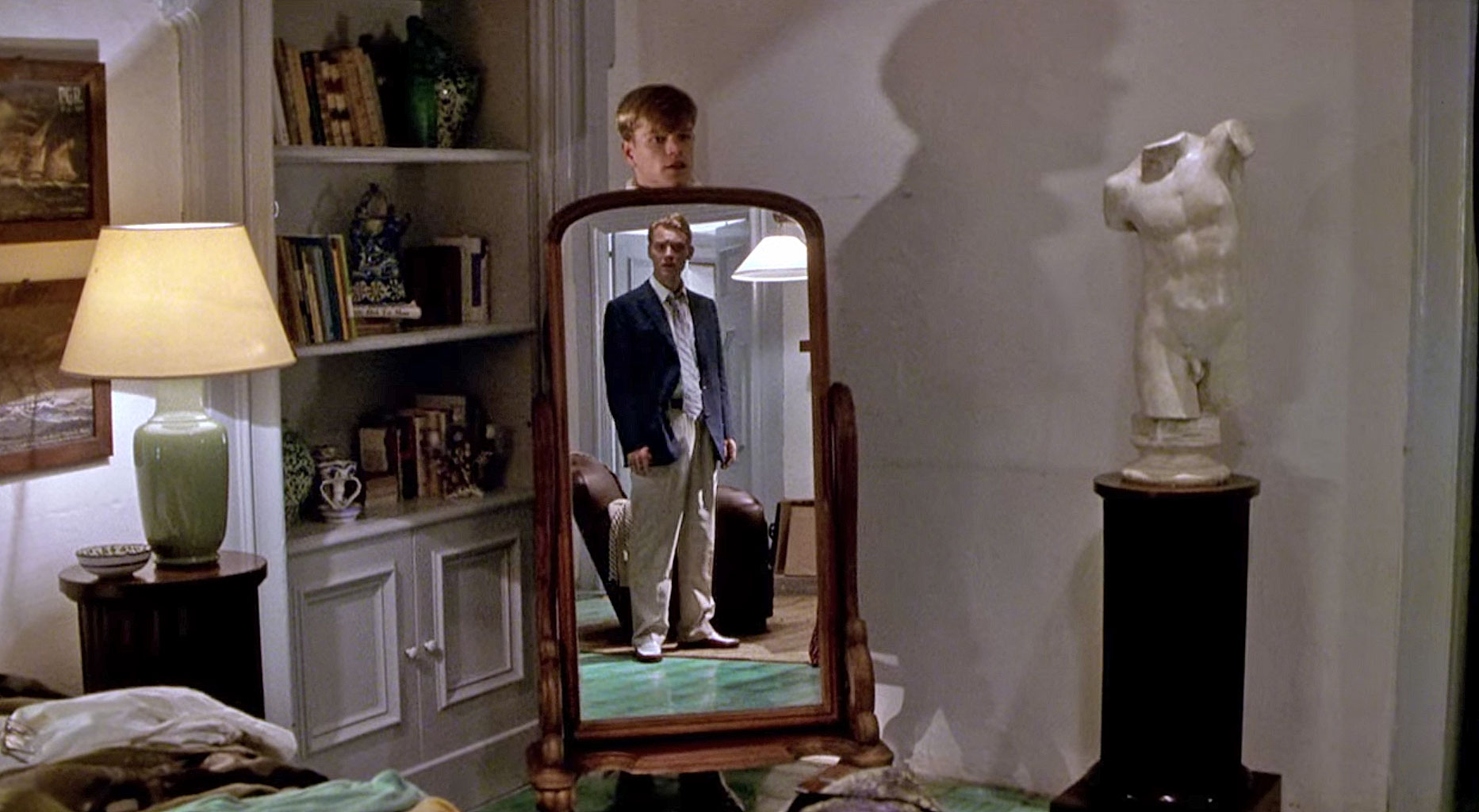 He had to bin his corduroy jacket but he could wear Dickies, same beige colour and almost identical in size. Tom had has suit copied from Dickies and it had been made by the same tailor in Mongibello. (A made up town).

Gucci is featured as a brand name dropped,

Freddy is described as wearing,

When Freddie comes to see Tom looking for Dicky he recognises his shoes saying that he has the same pair of shoes that he and Dickie has. They bought them from London. Tom says he bought his in America. Tom kept his old clothes, and they had been on a hanger for a long time it started to show in the shoulders. 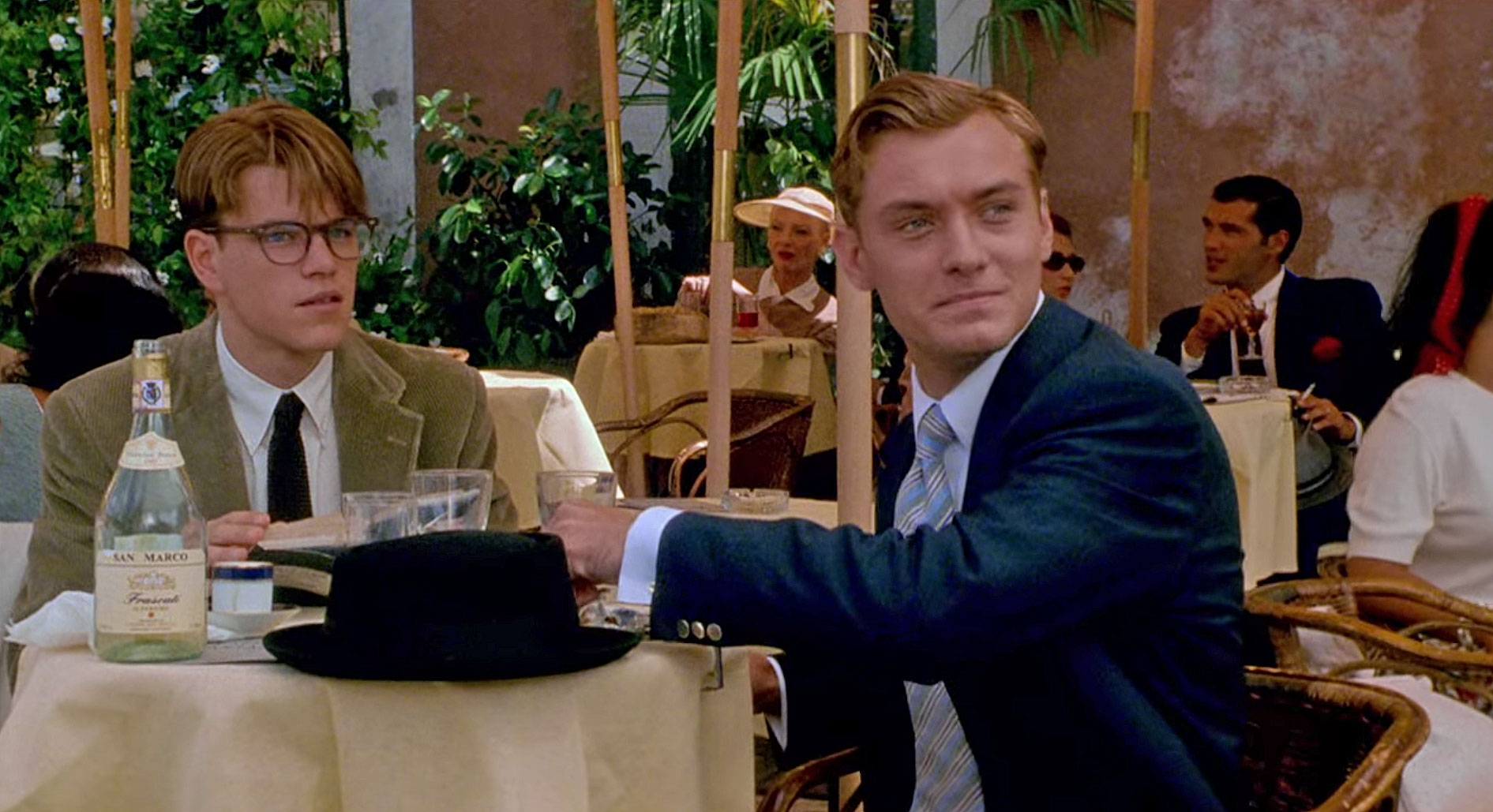 When the Italian police interrogate Tom as Tom Ripley, he wants to appear more slovenly, knowing that Dickie dressed neat. Tom is dressed in a tweed jacket and he pulls it, tugs at the buttons. (To look dishevelled).

Dickie’s favourite men’s tailor in Rome, Battistoni, is a real tailoring shop founded in 1946. It is housed in the inner-court of 61a Via Condotti. More contact information can be found on this article of Italy Travel and Life.

The Battistoni jacket that Tom prances around in front of the mirror is a classic Battistoni smoking jacket with satin peak lapel, exclusively selected for The Talented Mr. Ripley film. Below is some information I screen-grabbed from the Battistoni YouTube page. 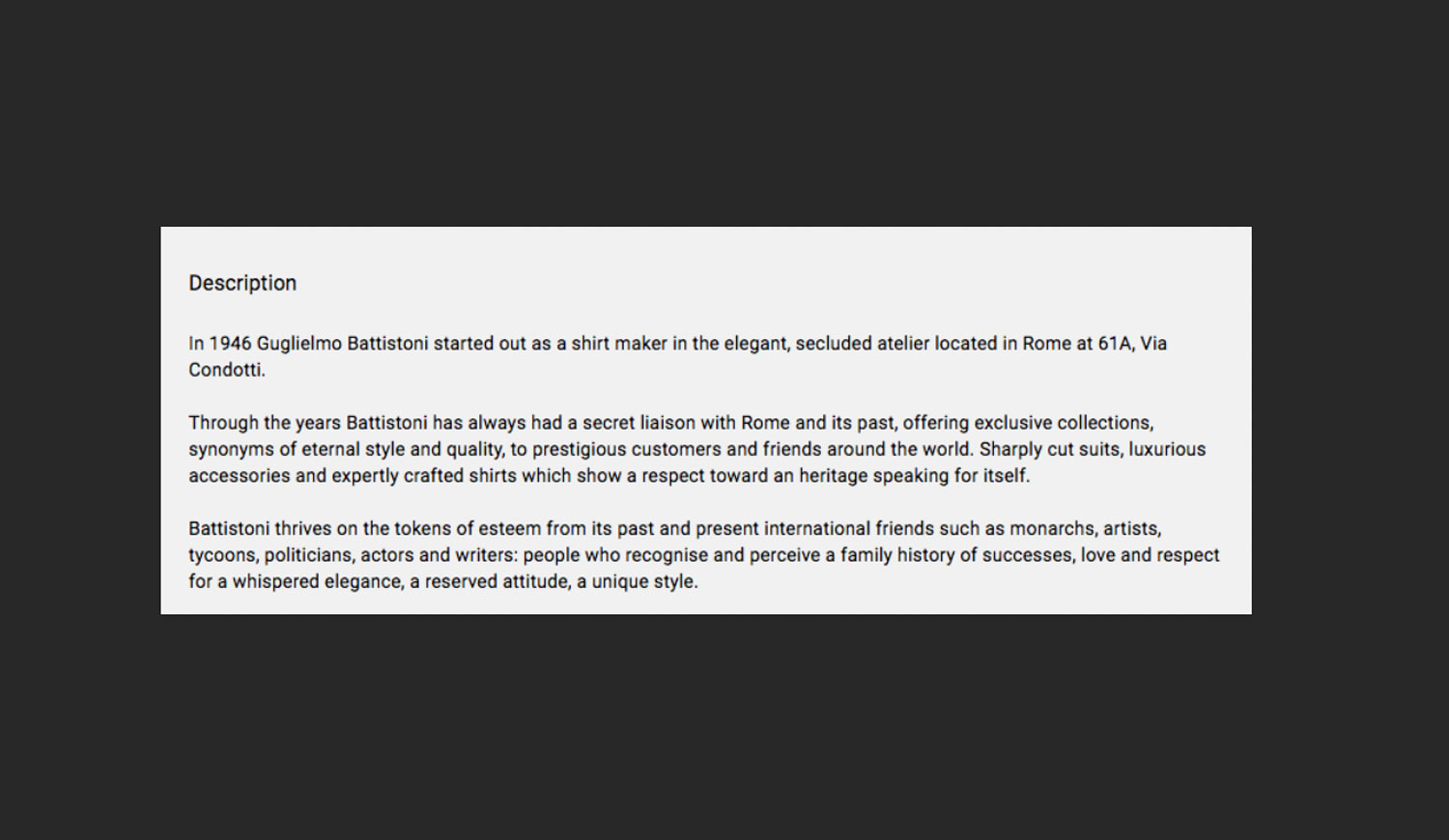 The store Ripley visits to have his wallet embossed with Dickie’s initials is the Gucci boutique on Via Condotti.

Feel free to support the show by buying some original fan ‘art’ of Matt Damon in The Talented Mr Ripley on our Redbubble page. Check out the shop part of the blog to see more merch. 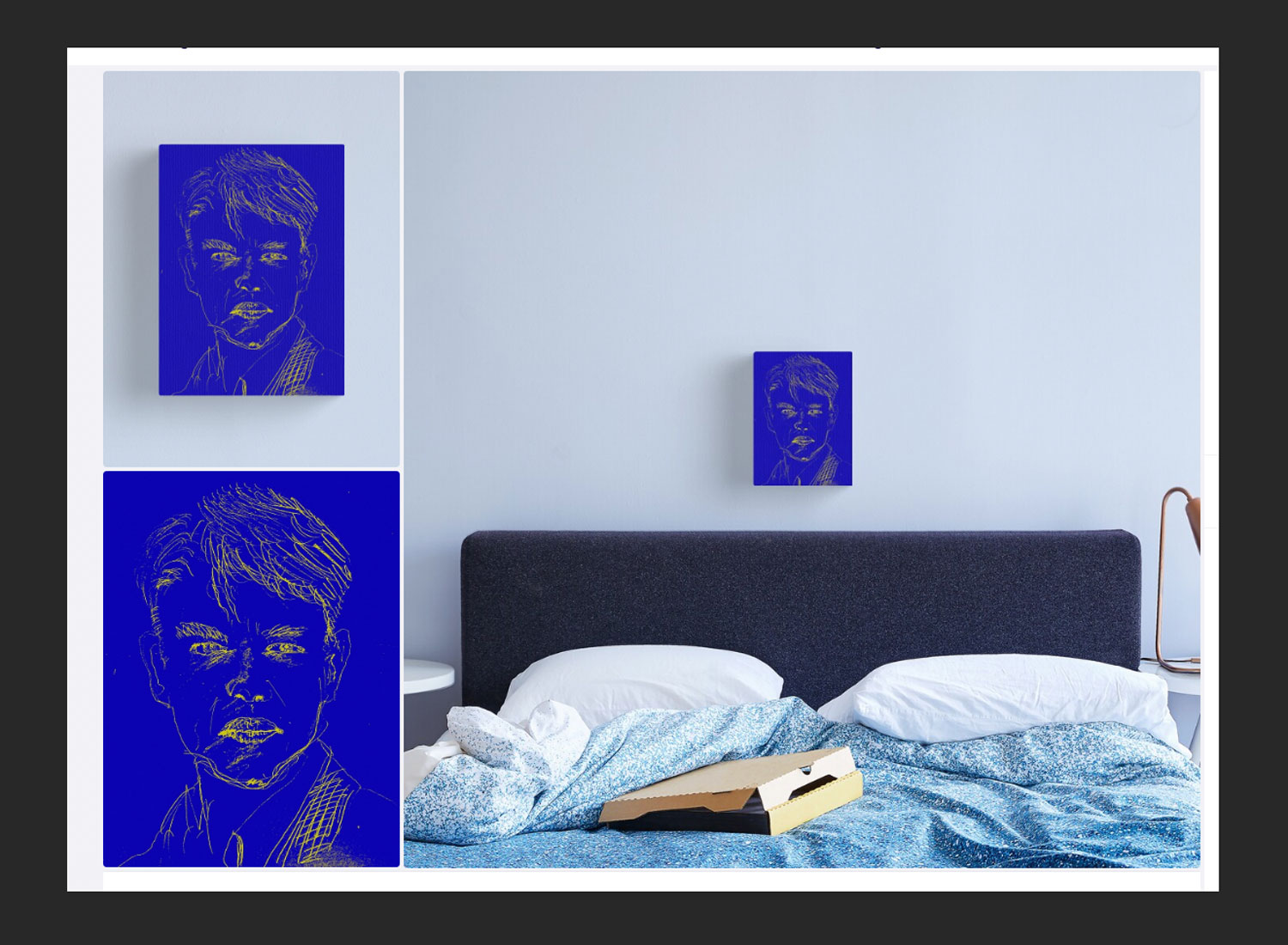 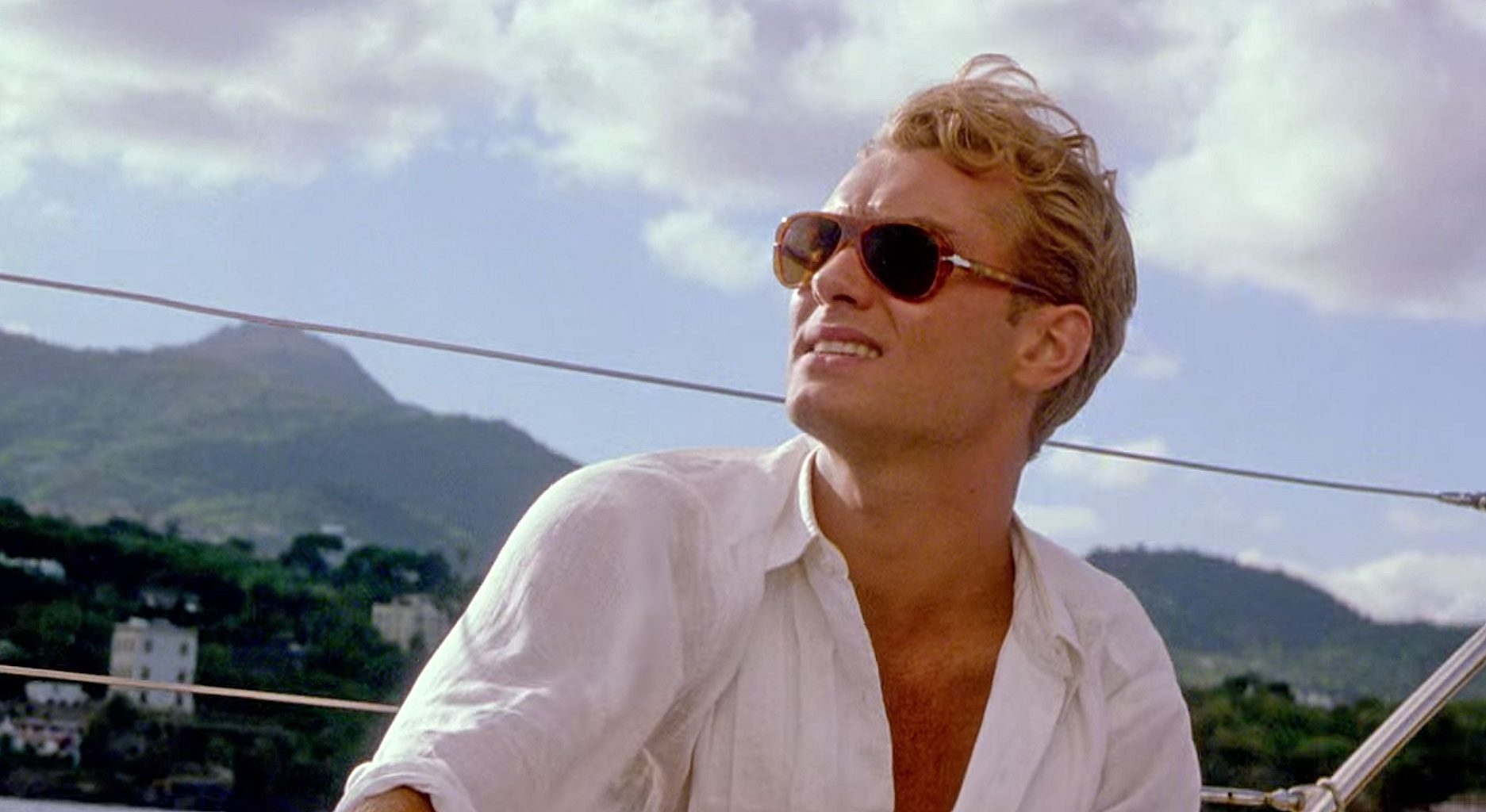 According to an article from the Robb Report the sunglasses Dickie Greenleaf wears are the Persol PO3260. Persol reintroduced the glasses back in early 2021 with a limited 200 run, but have since sold out.

My Very Rough Notes from the film The Talented Mr Ripley

The title sequence has a very Thomas Crown 60s inspired split screen. It builds a composite of Tom Ripley but not a complete picture. Suggesting there is no complete version of Tom Ripley.

Matt Damon borrows a Princeton jacket for his Piano performance, and that introduces him to Herbert Greenleaf (Jesus Focker!) After the performance he gives the jacket back to a friend and goes off to work as a toilet attendant.

When he meets Herbert Greenleaf in the shipyard he is wearing a very weighty old corduroy blazer. A very old look on young shoulders.

When he meets Meredith straight away he is lying. Adopting the Greenleaf name. In my opinion Tom hates and resents Marge more in the book than he does in the film.

It’s actually a menacing theme. He is adopting someone else’s identity, yet the music is playful and this gives the film a lightness. It’s not sinister in tone, yet. 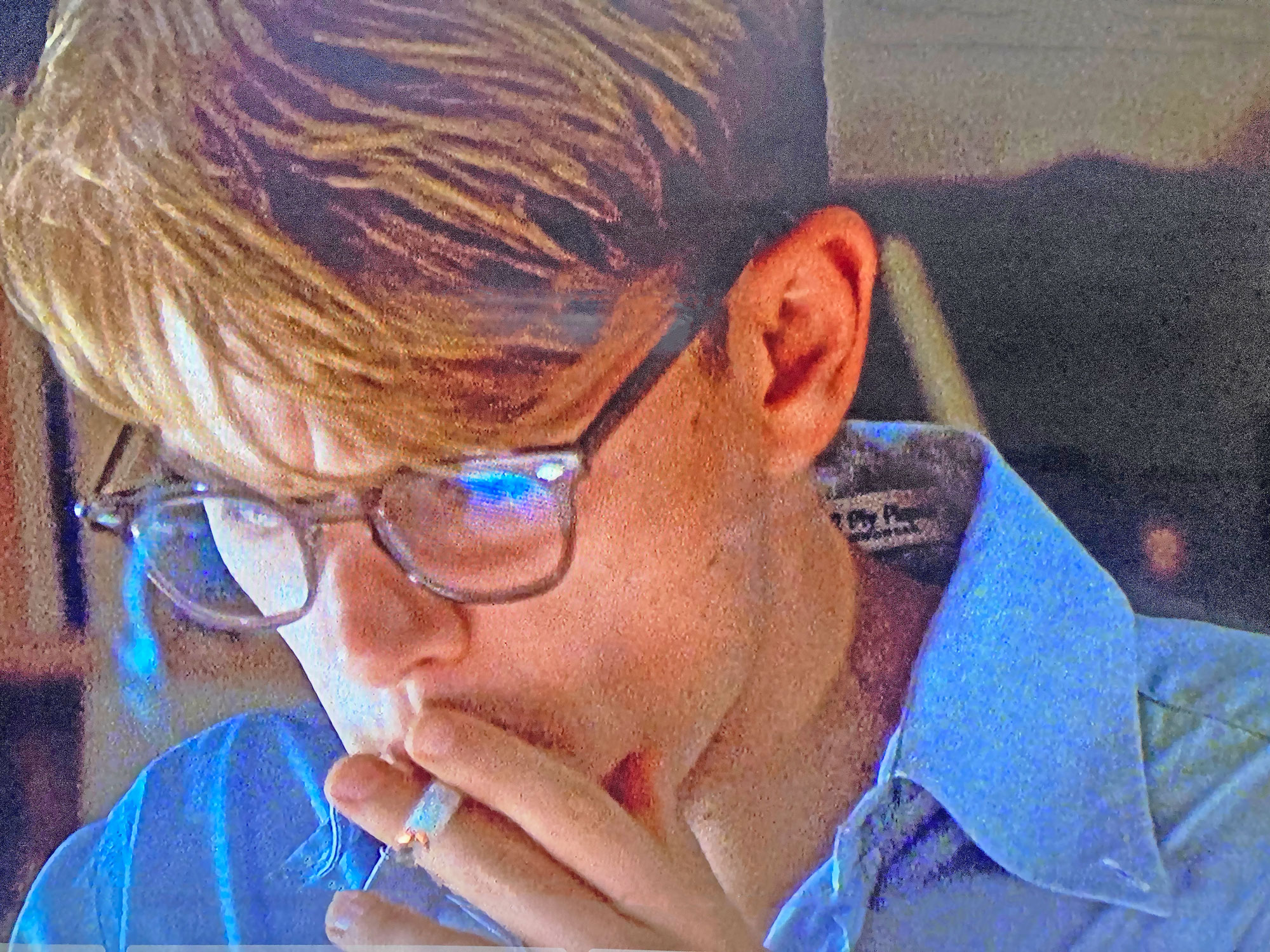 HELP! Can anyone identify the brand from the label?

The main difference between Dickie and Tom is that Dickie has come climatized to the Italian Style. He wears what looks like a silk linen blazer with a boating hat, white duck trousers and white loafers. The white trousers are in the book, and he is killed in those.

Ripley is square in his green corduroy blazer and taupe trousers. He doesn’t have an Italian wardrobe. This makes sense after he tells Herbert Greenleaf he has never been to Italy.

Dickie offers to lend Tom his clothes. As he knows he doesn’t have much and I think he is keen for him to look the part if he wants to be seen with him.

‘I think I’m having that too’. Matt Damon as Tom Ripley in The Talented Mr Ripley (1999). pic.twitter.com/jOAfsw3AIC

All screen grabs used here under the fair use doctrine. You can also listen to an interview with Scott Simpson Fraser who has recreated some of the knitwear on episode #153. This show is brought to you buy Hawkins & Shepherd you can get an exclusive 30% discount at check out on any shirt when you click here. The movie is available to buy through Amazon.